Razer announced they were finally jumping headfirst into the world of gaming monitors at this year’s CES, and man alive does this 27in display get a lot of things right. Dubbed the Razer Raptor, this 2560×1440 IPS screen is still in the early stages of development at the moment, but even now there’s plenty to admire here.

Indeed, the thing I’m most excited about isn’t even anything to do with its image quality. Instead, it’s the 90 degree hinge that lets you tilt the monitor all the way back until its horizontal for easy access to those all important ports. And the back of the stand… hoo boy. The back of the stand is magnificent.

In true Razer fashion, boring old black display cables simply won’t do for their new Raptor screen, so you’ll get five special green ones bundled in the box instead. Each one gets its own little groove down the back of its wide, height-adjustable stand, too, keeping those five snaking cables nice and tidy as they disappear down the back of your desk. 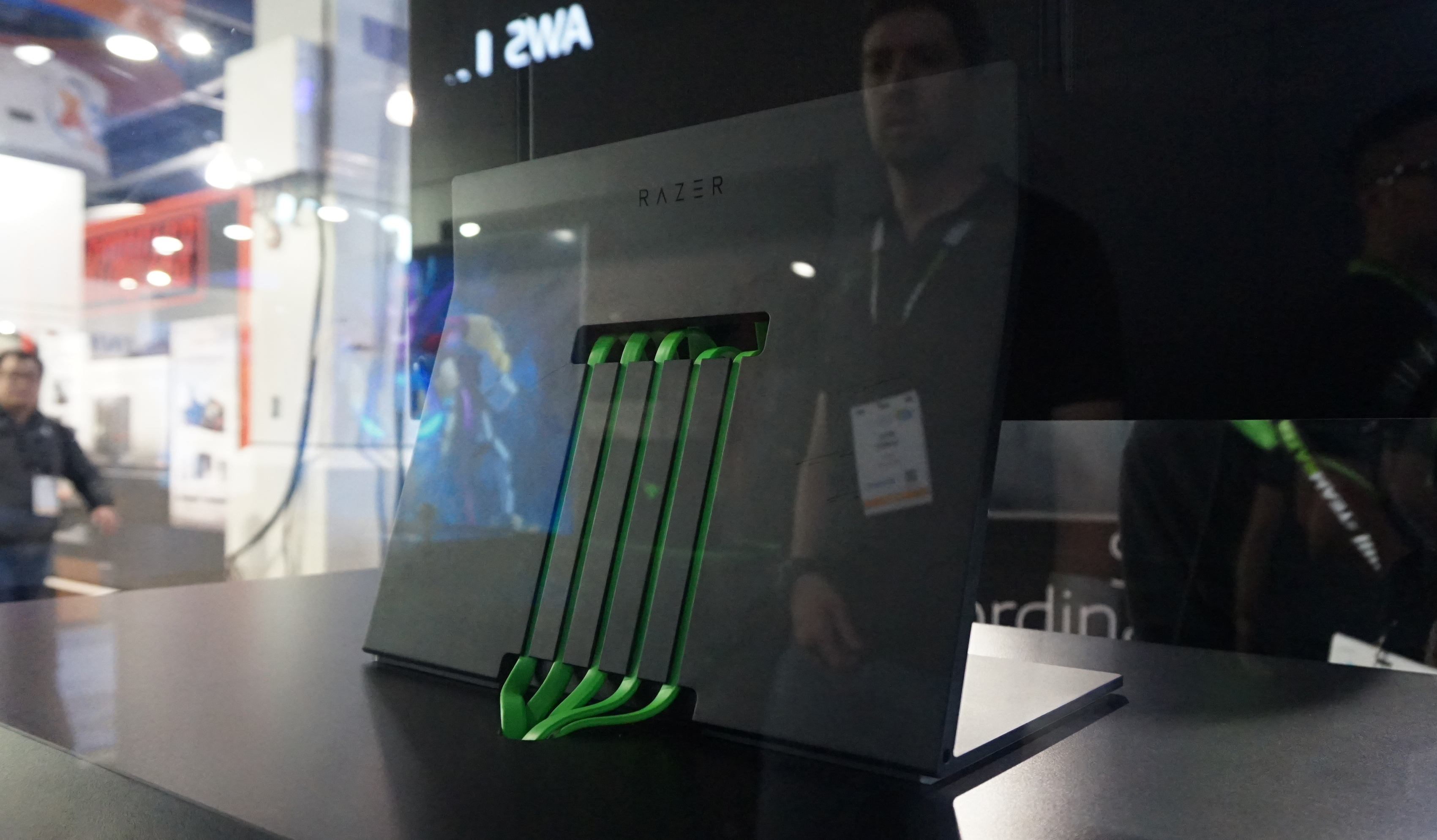 Just look at how tidy those cables are!

It all looks rather elegant if you ask me, and I wish more monitors put this level of care and attention to detail into their respective cable tidies. Admittedly, my Razer handler did, in fact, have a bit of trouble removing the little CNC-milled channel plates that help keep each cable in place, so it’s clear there’s still a bit of design work to be done here to make it a bit more user-friendly. In theory, though, I’m very much on board with this idea, even if the overall width of the stand isn’t quite to my tastes.

Other nice touches are the Raptor’s forged aluminium base and fabric-wrapped back, giving it an even more premium look and feel than your typical plastic gaming monitor. And, of course, no Razer product would be complete without a dash of Chroma lighting around the edge.

All right, I’ll stop yabbering about cables and whatnot now. You probably want some actual specs, don’t you? Well, as mentioned above, this is a 1440p IPS display with a lovely high 144Hz refresh rate that Razer claims will be able to hit 95% of the HDR-grade DCI-P3 colour gamut. Naturally, that means the Raptor also supports HDR, but right now they haven’t said whether it will meet a particular standard or not, such as VESA’s increasingly widespread DisplayHDR specification. 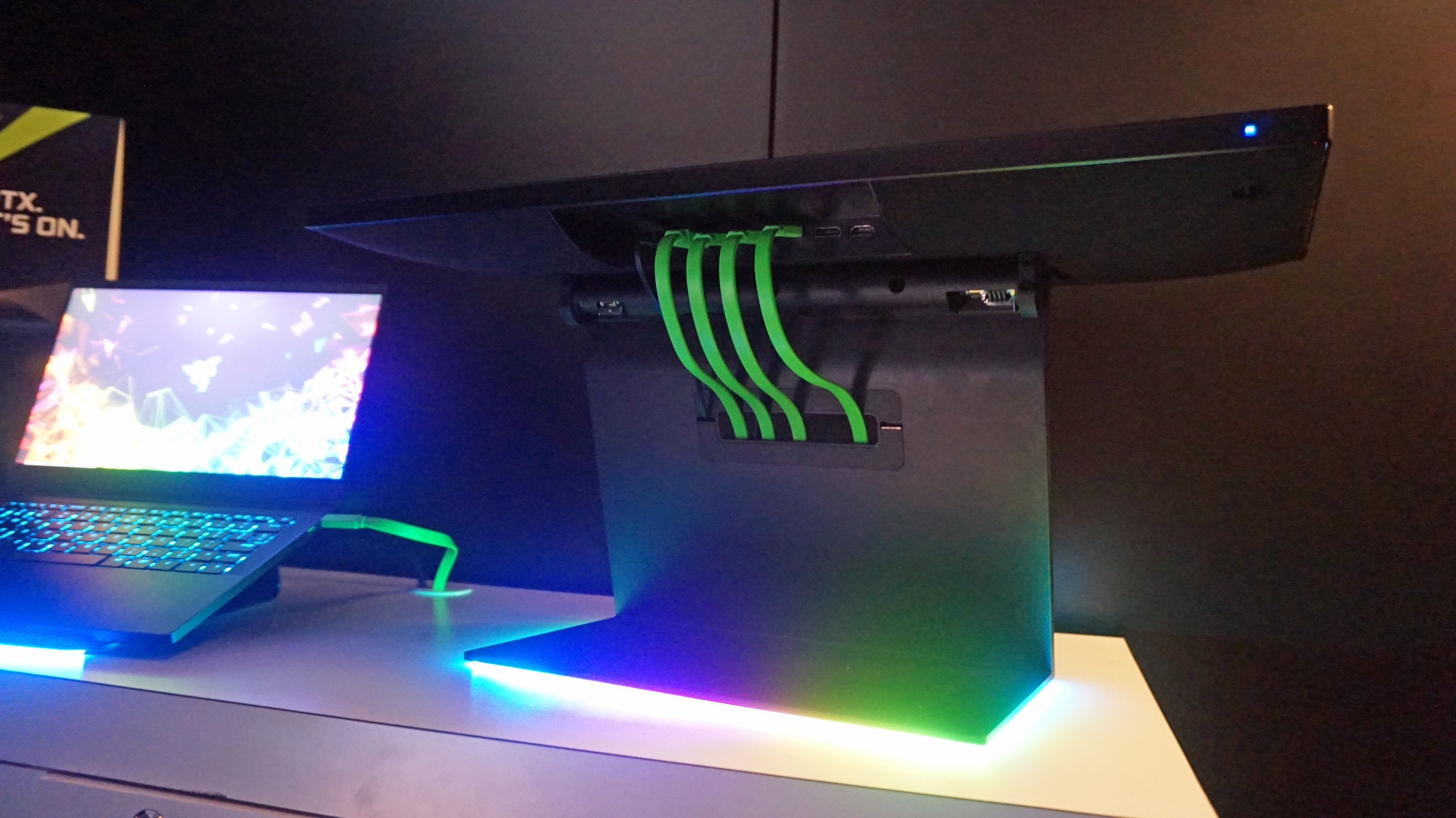 JUST LOOK AT IT.

It’s a FreeSync monitor, though, so it’s possible it may well end up being a proper FreeSync 2 HDR monitor by the time it comes out – especially when Razer claim its maximum brightness level is 420cd/m2, which seems to be quite common among other FreeSync 2 monitors I’ve tested so far.

There’s also a chance it could end up as one of Nvidia’s new G-Sync Compatible monitors, too, once Nvidia get round to putting it through their rigorous testing process. We just don’t know yet. What Razer did tell me, though, was that they were also working on a separate, proper G-Sync version of the Raptor, which they’re also hoping will launch later this year. Either way, you should get all your variable refresh rate needs covered regardless of what kind of graphics card you have.

As for ports, you’ll get one HDMI 2.0, one DisplayPort 1.4, one USB-C (which can also charge your phone, I might add) and two regular USB 3.1 ports for any peripherals you might want to plug in.

It will be a while before I can test one myself, however, as Razer are only planning to release the Raptor in the US and Canada at the moment, with a vague release date currently pegged for sometime between April and June later this year. When I questioned Razer about whether it might eventually come to other countries like the UK, they said, “We’ll look at how we can deploy it to other regions, but we don’t have any definitive plans right now.” Booo.

That may be a blessing in disguise for some, though, as it’s currently going to cost a whopping $700. That’s pretty expensive for a FreeSync monitor, so who knows how much the G-Sync version will eventually cost, but from my brief demo session with the Raptor, I’d say it’s definitely up there with other high-end monitors of this price – especially when you take into account that nifty bit of cable management and lovely, 90-degree hinge. Only time will tell, of course, but in the mean time I’ll be hoping against all hope that it does indeed arrive in the UK sometime soon.