The Asus ROG Mothership is a preposterous piece of technology. I know I said earlier in the week that the Acer Predator Triton 900 was the maddest gaming laptop I’ve ever seen, but this desktop replacement really takes the biscuit. Not only does this huge great thing need a kickstand to prop up its 4.7kg chassis, but its keyboard can also be folded in half and detached from the main body of the laptop. It’s completely and utterly ridiculous in every single way, and yet it’s also sort of brilliant.

The concept of detachable keyboards isn’t new, of course. There have been many such hybrids over the years, but usually these two-in-one laptops are little more than glorified tablets. Remove the keyboard, and you’re stuck using the touchscreen. They’re not cut out for gaming.

The Asus ROG Mothership, on the other hand, is effectively a two-in-one laptop PC, giving the freedom to put the screen and keyboard wherever you damn well please and still (sort of) take it on the move with you. Sure, its huge 17.3in screen and 29.9mm thick chassis means it probably isn’t best suited for cramped trains or long flights, but the idea of being able to prop it up on my coffee table and kick back with its detachable keyboard and integrated touch pad on the sofa is certainly an appealing one, especially if it means my legs don’t get toasted in the process. 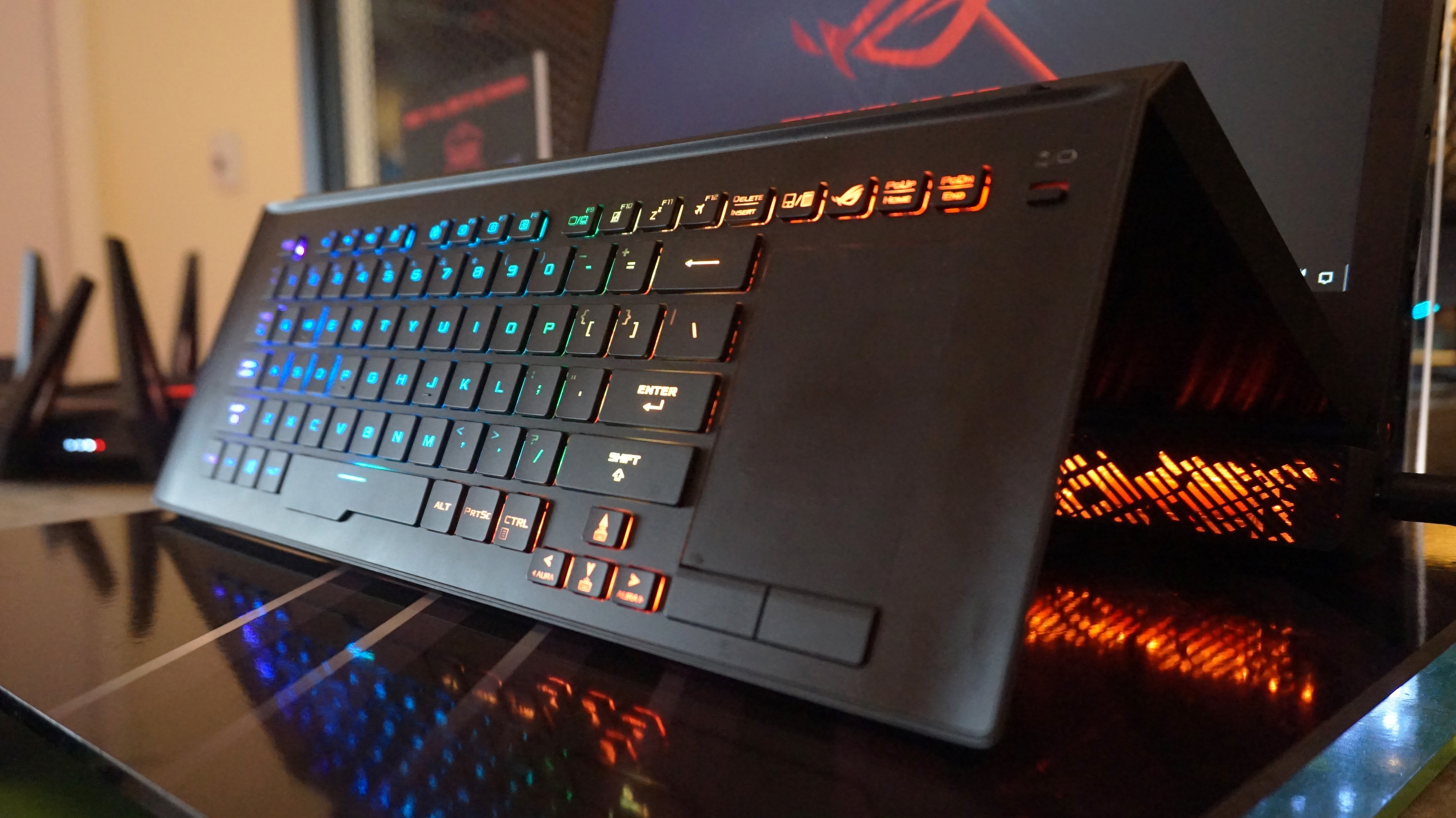 By sticking all of its components behind the screen instead of the keyboard, the ROG Mothership can actually draw a lot more air into the system as a whole, helping to keep it cooler under load while playing games. Indeed, Asus said their original Mothership prototype was closer to 40mm in thickness when they first started developing it, but the design proved so effective they were able to shave another 10mm off it.

Admittedly, a laptop that’s still nearly 30mm thick isn’t exactly ideal when it comes to portability. But unlike a lot of other laptops I’ve seen at this year’s CES such as the super slim MSI GS75 Stealth, at least this one should be less susceptible to throttling when under load. Asus aren’t taking any chances here, as this thing has eight heatpipes, four heatsinks with 375 copper fins that are just 0.1mm thick and two 12V fans, which you can see below. Asus’ onboard software also gives you plenty of different cooling profiles to play with as well, including a Turbo mode that spins everything up to eleven, a silent more that’s easier on the ear drums, plus the option to create your own. 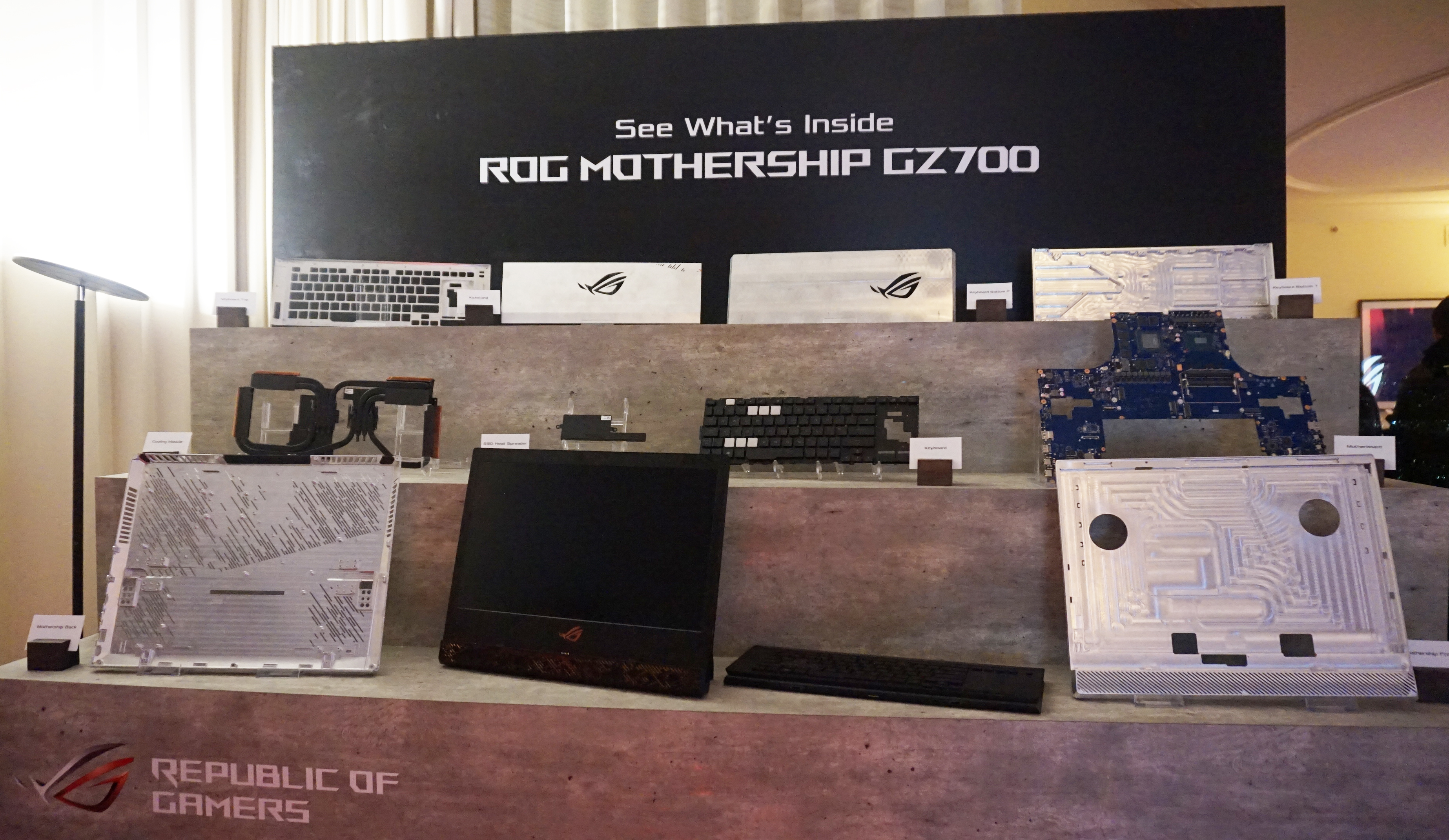 The inside of the ROG Mothership laid bare…

Its design also allows for the Mothership to put its speakers right below the screen, giving you a richer, deeper sound that doesn’t get lost beneath the laptop. There are four 4W speakers in total, and Asus have even thrown in a high-end ESS Sabre DAC and headphone amp with Hi-Res audio certification for up to 24 bits and 192 kHz, which will no doubt come as good news for anyone with a large library of Hi-Res audio files.

Its six-core 4.3GHz Intel Core i9-8950HK processor is overclocked to 4.8GHz out of the box, too, giving you a heck of a lot of power to play with in games and desktop tasks alike. Add in space for up to 64GB of DDR4 RAM and a 512GB NVMe drive RAID 0 array that hangs two of its three SSDs directly off the CPU instead of the motherboard’s chipset so it can bypass the usual bottlenecks and achieve speeds of up to 8700MB/s, according to Asus, and you’ve got one seriously beefy system. 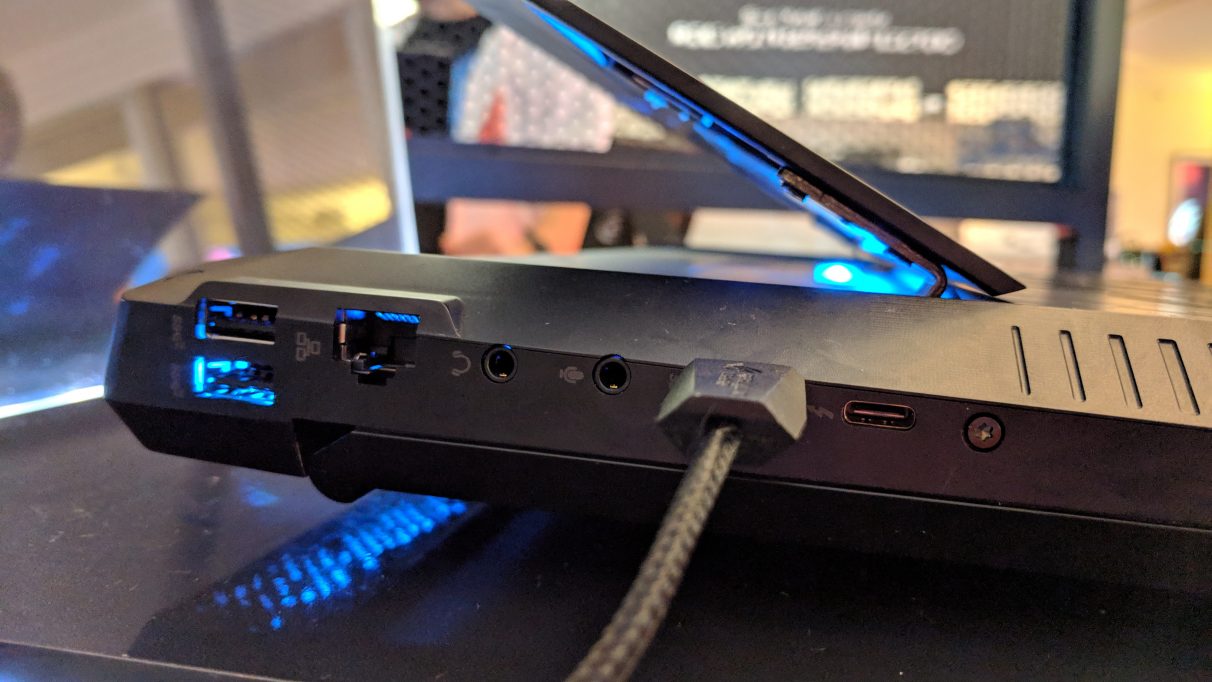 On the left, you get three USB 3.1 ports, one USB-C, an Ethernet port and separate headphone and microphone jacks… 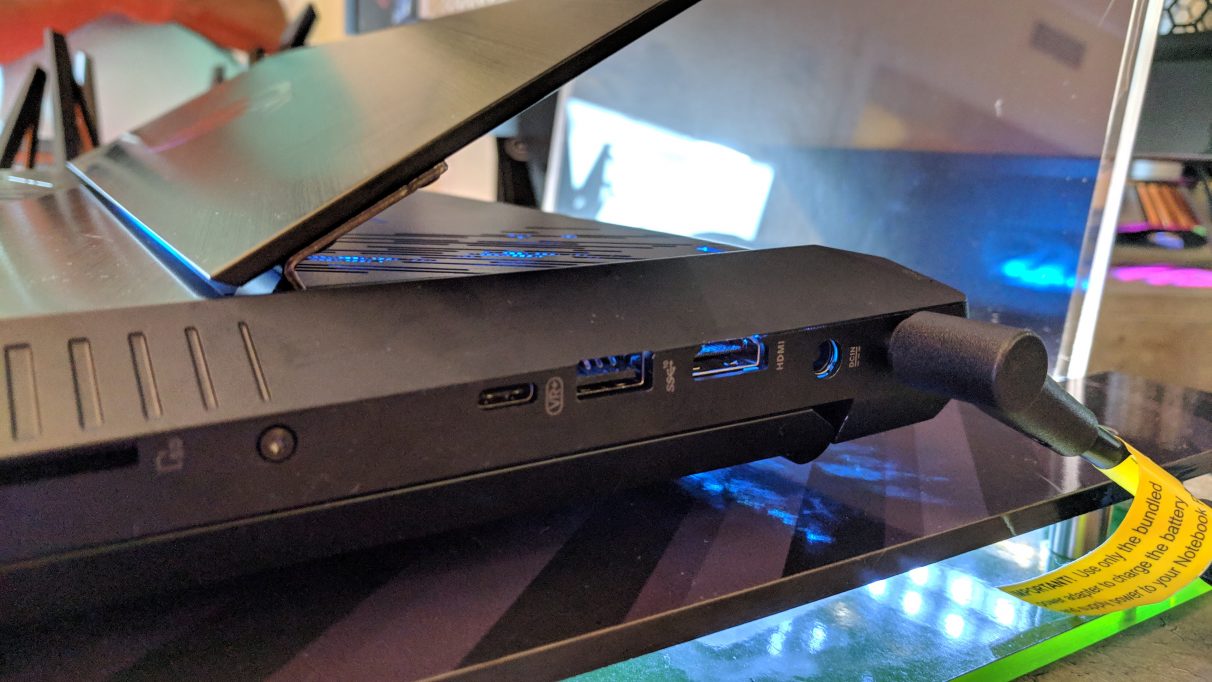 As for the Mothership’s gaming chops, there’s an Nvidia GeForce RTX 2080 chip inside it, which should be more than enough to make full use of the screen’s 1920×1080 resolution, 144Hz refresh rate and Nvidia G-Sync adaptive frame rate tech. It’s a mad set of components, and I’ll be interested to see how they all hold up under pressure once review samples are available.

The Mothership’s masterstroke, however, has to be its foldable, detachable keyboard. Held in place by magnetic anchors, the whole thing lifts away and slots back into place with incredible ease. There was a decent amount of travel when I had a quick play on it myself, and there was barely any delay when I took it off and starting typing on it over its 2.4GHz wireless connection, either. 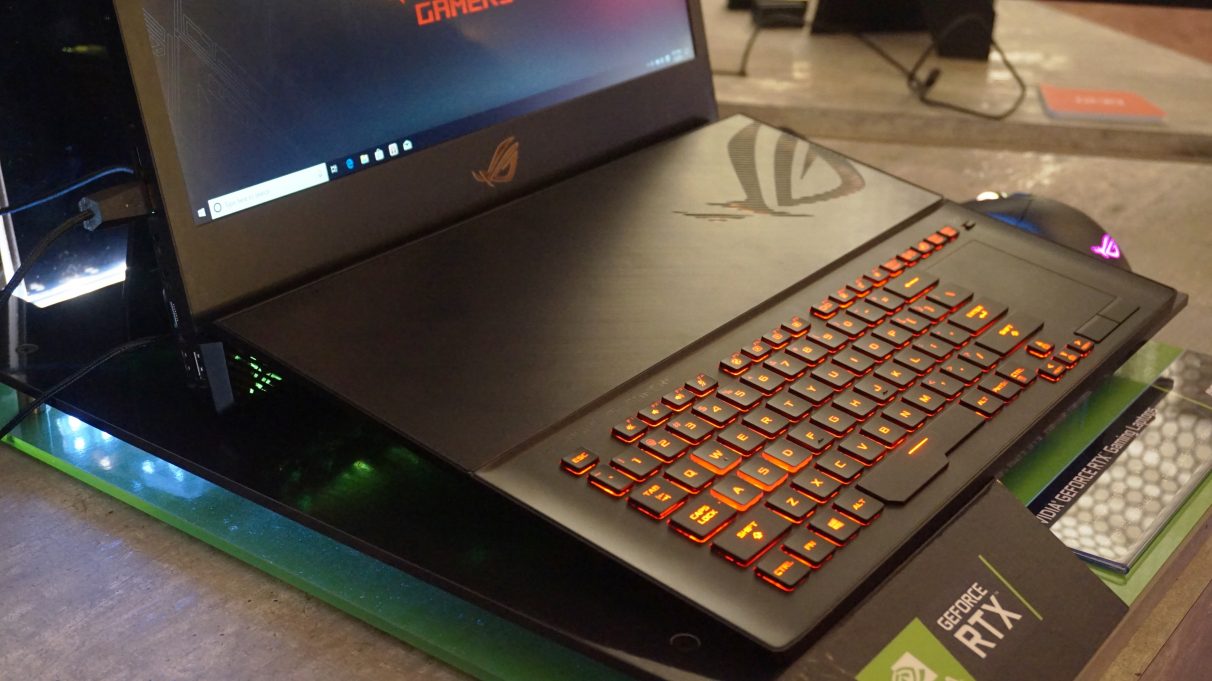 In its default position, the keyboard angle’s quite steep… 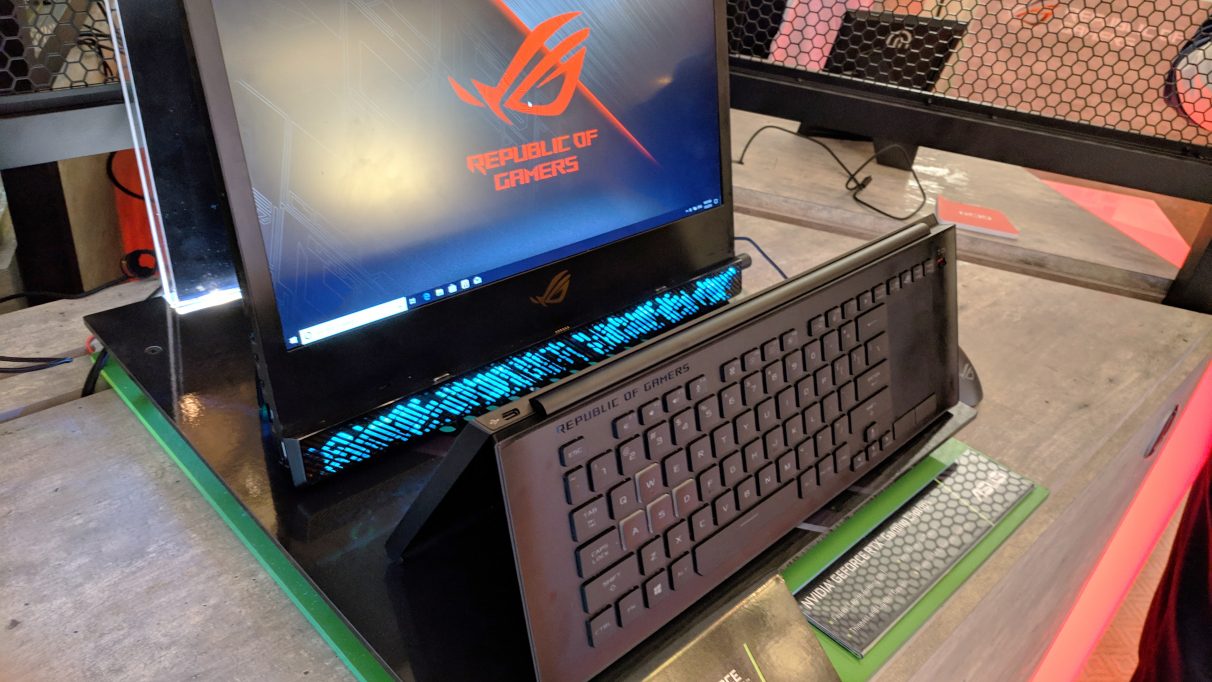 …but when you detach it and fold it in half, you can position it anywhere you like.

I think it’s a really neat idea, and hammering away on it wirelessly was definitely a lot more comfortable than trying to use its rather steep default typing angle when I had it attached to the rest of the keyboard. Asus couldn’t give me any indication of what the keyboard’s battery life was like, unfortunately, but you’ll be pleased to here there’s a sneaky little USB-C port tucked away beside its sturdy-looking hinge so you can use it as a wired keyboard if it happens to run out of battery mid-sentence.

The only thing it’s really missing is a slide-out mouse mat like the Razer Turret, as the squished, built-in touch pad on the side simply isn’t practical or responsive enough for playing games on from afar. Still, it’s a small niggle overall and I appreciate that this would only make this hulking monstrosity even bigger and heavier than it already is. 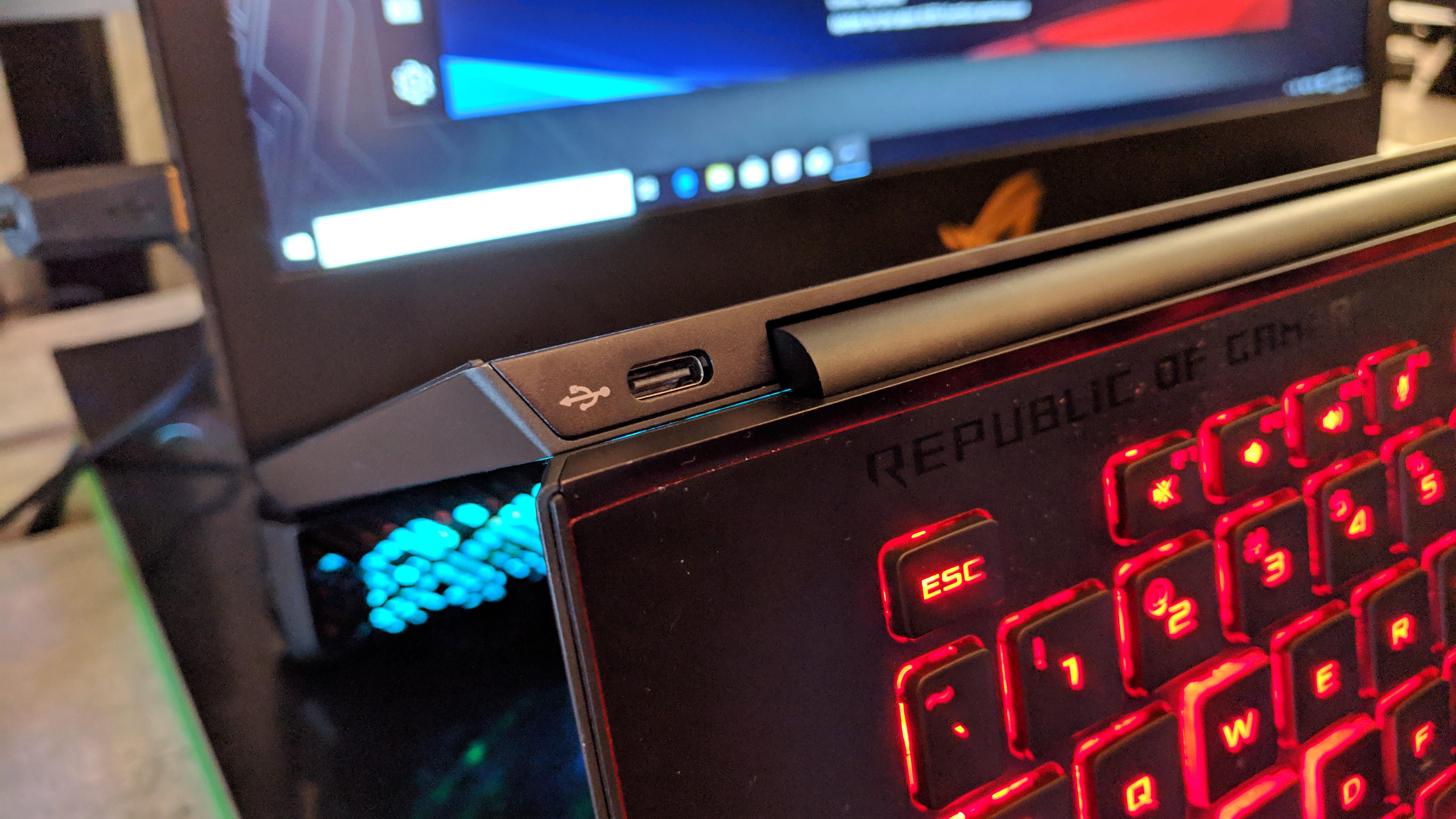 The big question is how much this mad Mothership is actually going to cost. Asus weren’t ready to announce a price when I asked them during my demo session, but with a vague release date sometime between April and June, it hopefully won’t be too long before we find out.