When I walked into Razer’s HyperSense room at their CES booth, I wasn’t really sure what to expect. Before me stood a desk and chair like any ordinary PC set up (albeit one solely comprised of Razer products) and two grinning demo guides. “Do you know Doom?” one of them said. Why, yes, I do, I like it a lot and know it well, I replied. “Sit down then,” he said, “and put on these headphones.” So I did. And let me tell you, readers, this what I played was not the Doom I remembered. This was HyperSense Doom, and you simply haven’t experienced the true majesty of emptying a Super Shotgun into the hoofing great face of a hell demon until you’ve fired it with the full force of Razer’s new haptic feedback system.

Announced earlier this week alongside their new Razer Raptor monitor, HyperSense is effectively Razer’s answer to 4D cinema. You know the ones, with the rumbly seats and stale whiff of smellovision every 30 seconds. Those ones. Thankfully, you won’t be assaulted by gusts of foul-smelling air with HyperSense – I’ll leave that to the rather naff Whirlwind FX Vortex machine – but you will be shaken, stirred and everything in between thanks to the dozens of haptic motors Razer’s decided to cram in a bunch of their PC gaming peripherals, because why the hell not? They’ve done it with RGB lights with their Razer Chroma tech, so the only logical next step must be to do exactly the same thing with haptic motors or something.

Together, they form the mighty morphin’ HyperSense experience, a home-based haptics system for the ultimate level of immersion. It’s as bonkers as it sounds, really, but man alive does it make for an interesting demo, especially when the game in question has been specifically tuned to make the most of it. 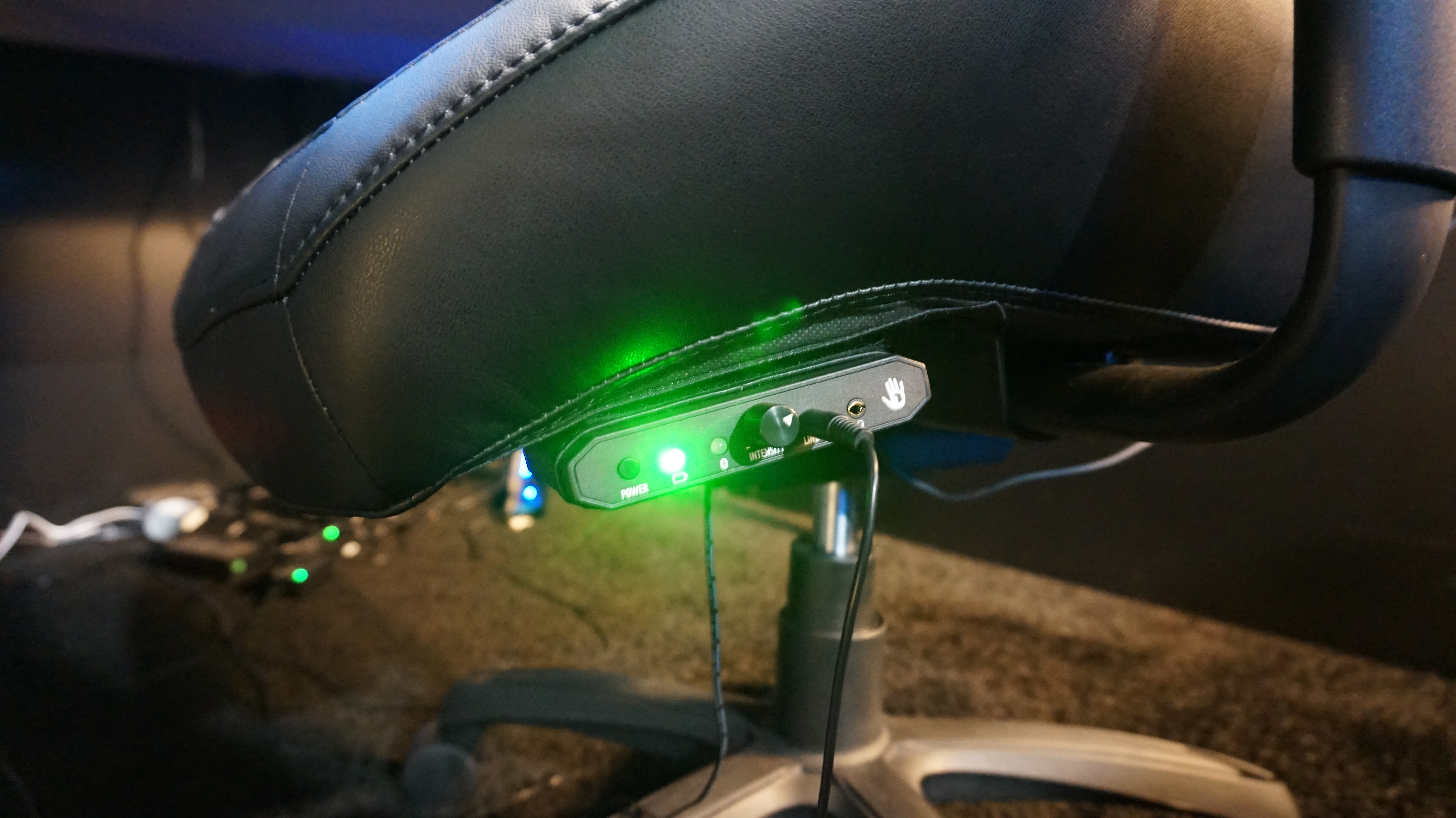 Razer’s HyperSense chair prototype lets you adjust the level of intensity of its whizz pops and fizz bangs.

Another demo involved playing a bit of Overwatch, for example, which isn’t calibrated for HyperSense yet. As such, this only offers a basic level of haptic feedback – what Razer call the ‘out of the box’ experience. Imagine, if you will, a keyboard wrist rest that jolts in time with your footsteps as well as shots being fired from your left, and a mouse that pulses as you fire a rocket across the stage or get hit from the right. Even the chair you sit on can play a role, as this started buzzing when I was getting shot in the back, as well as when I activated Pharah’s jetpack. That’s what HyperSense is about – emphasising those short, sharp little audio cues as well as using a game’s positional audio data to create a full, 360 degree haptic experience.

It’s pretty sophisticated even as an ‘out of box’ experience, but when developers do stick their oars in and tie specific game events, audio cues and specific mechanics to Razer’s haptic motor system, the effect is utterly transformative. Doom is one such game with HyperSense integration at the moment, and let me tell you, it’s pretty damn intense. Not only were the headset, mouse and wrist rest going full throttle against the game’s pumping, heavy-metal soundtrack, but the chair was also buzzing against my back as dozens of demons descended on me at once. 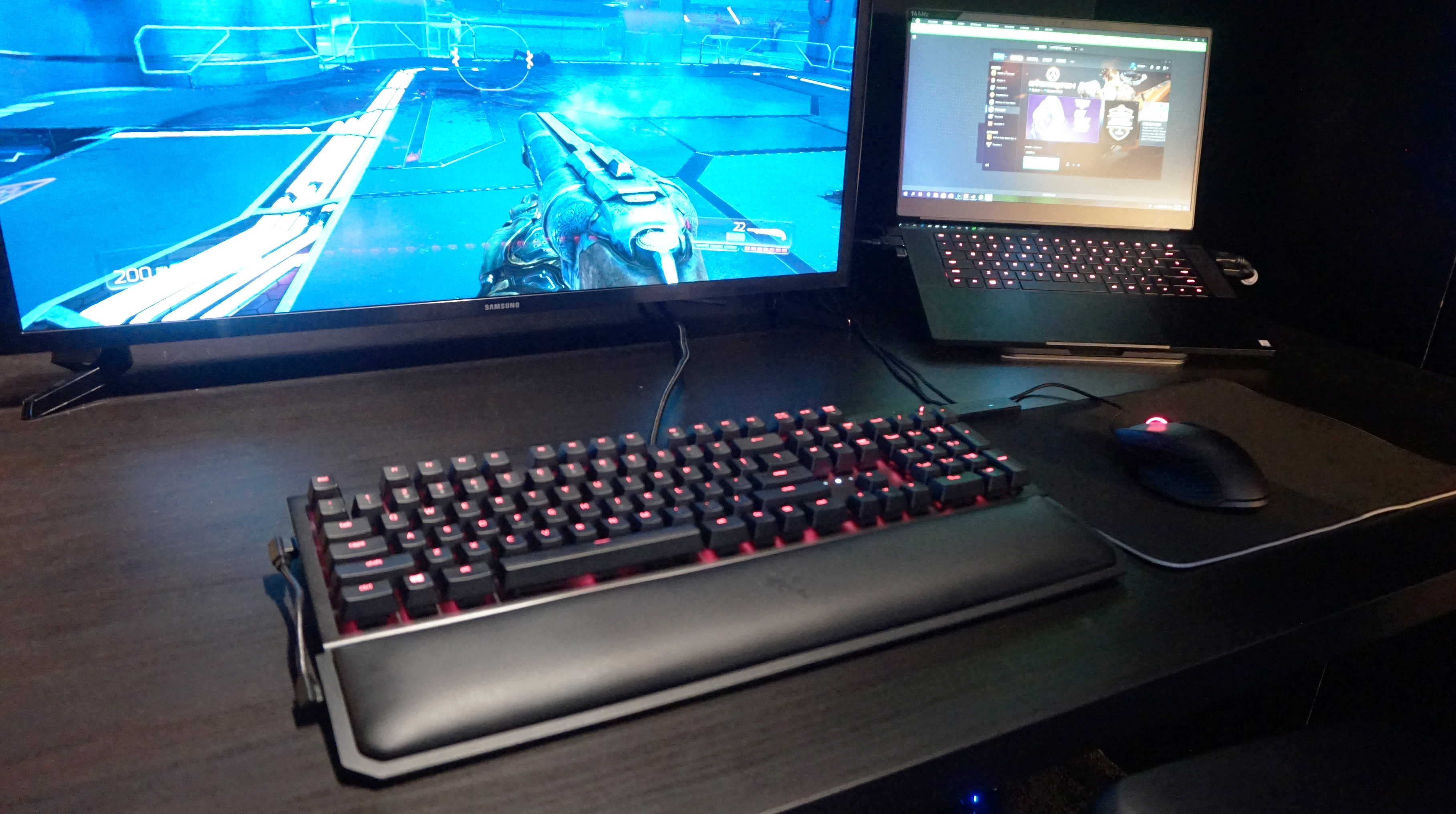 At the moment, Razer have modelled their HyperSense mouse and keyboard on their existing Basilisk and Blackwidow Elite peripherals.

I must admit, the experience lost some of its subtlety when the action got really heated, as it then just felt like my entire body was being assaulted by one big, constant vibration. It’s still only a concept idea at this stage, though, Razer told me, so this may well change once it reaches the final stages of development. By how much is up for debate, though, as for the most part Razer haven’t actually made the haptic motors themselves in this case, as the mouse and wrist rest was built using haptics from a company called Lofelt, while the chair was made together with Subpac, which means any potential improvements are dependent other people.

The only thing that Razer does have a haptic hand in is their wireless Nari Ultimate headset, which was the only bit of hardware in the demo that’s actually had a proper release so far. I’ve yet to do a full review of the Nari Ultimate, but after experiencing the full whack of HyperSense going guns blazing across my entire desktop, I suspect the haptic feedback effect won’t be nearly as impressive when you’ve only got a pair of headphones on. Still, they sounded like a stonking pair of headphones during my brief time with them, full of rich, deep bass and warm highs and mids, and I’ll do my best to get a proper review sample in as soon as I can. 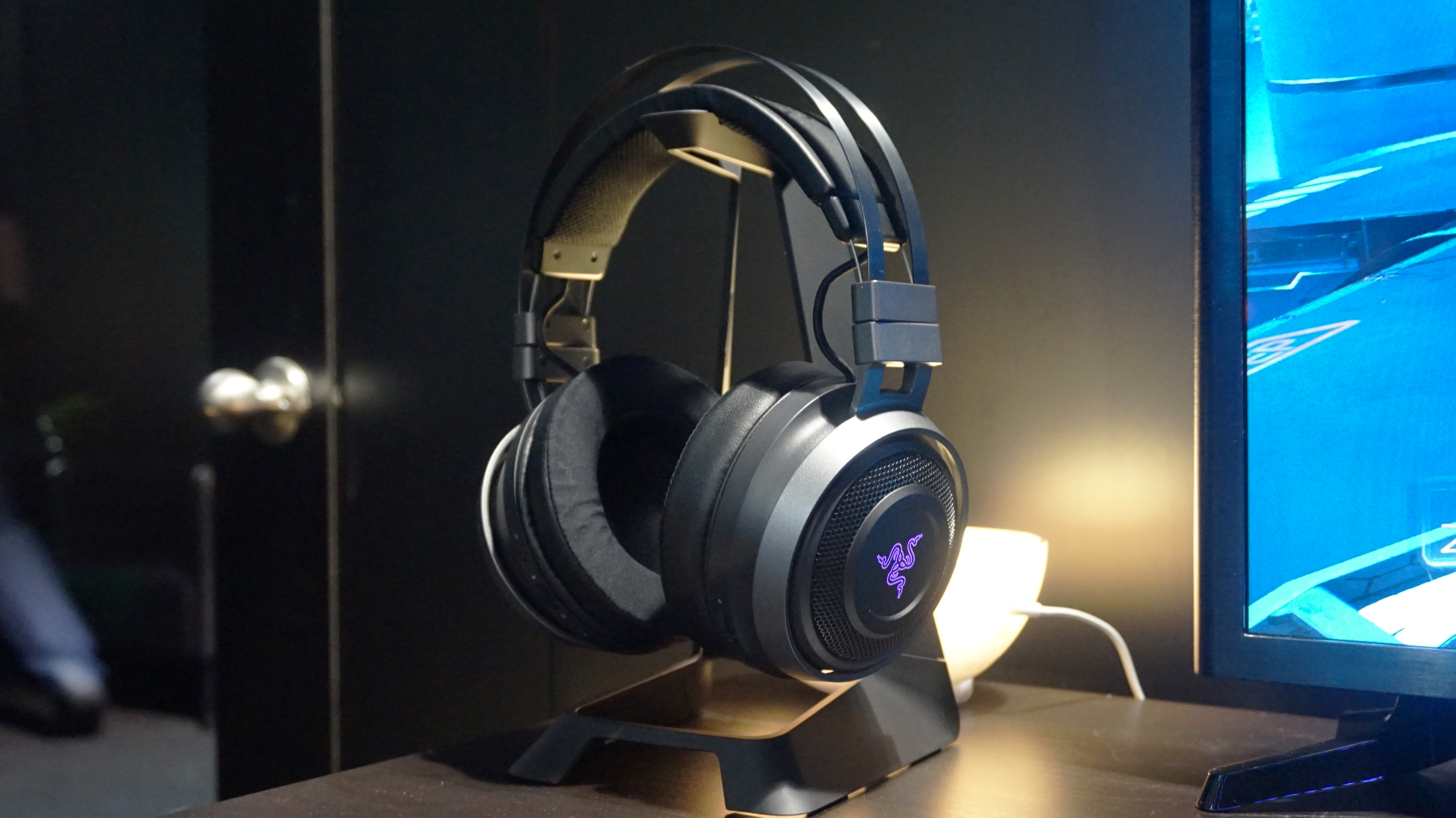 As for whether HyperSense will really take off as an actual ‘thing’ once Razer finish tinkering about with it, I’d file this one safely away in the novelty section for now. It’s a cool thing to try, and I think a part of me will now forever look at Doom and my non-haptic setup at home with a sense of misty-eyed wistfulness. But would I go to the effort of buying dedicated HyperSense peripherals to have in my home at all times? Probably not. Maybe, if everything was actually a good mouse/keyboard/chair in its own right, but even then I don’t think I’d actually use HyperSense on a regular basis. I’m happy to be proved wrong if I ever get to try it again with a wider variety of games, but in the mean time, the memory of that glorious, HyperSense’d Super Shotgun is more than enough for me.

The Movie: The Game: The Quiz