Most articles about Dwarf Fortress start with a long-winded attempt to explain Dwarf Fortress, but this one won’t. I don’t want to tell you what this game does – I want to show you, right now. Then, if you’re interested, you can learn all about what it is afterwards.

Here’s five things I will tell you before we get into it:

Lorbam is a small, skinny dwarf in her mid-sixties, with a brash, friendly manner and a head full of dreams. She’s travelled halfway across the world with six other settlers, to a steaming rainforest called the Jungle of Hides, where she intends to start something she calls the “Basement Of Curiosity”.

I don’t know about you, but it sounds an awful lot to me like she wants to build an underground zoo – and if she’s come all this way to a jungle, I reckon she’d like nothing more than some chimps as the main attraction. I mean, if you were going to start an illegal primate dungeon, you’d be hard pressed to think of a better name than “the Basement Of Curiosity,” right? 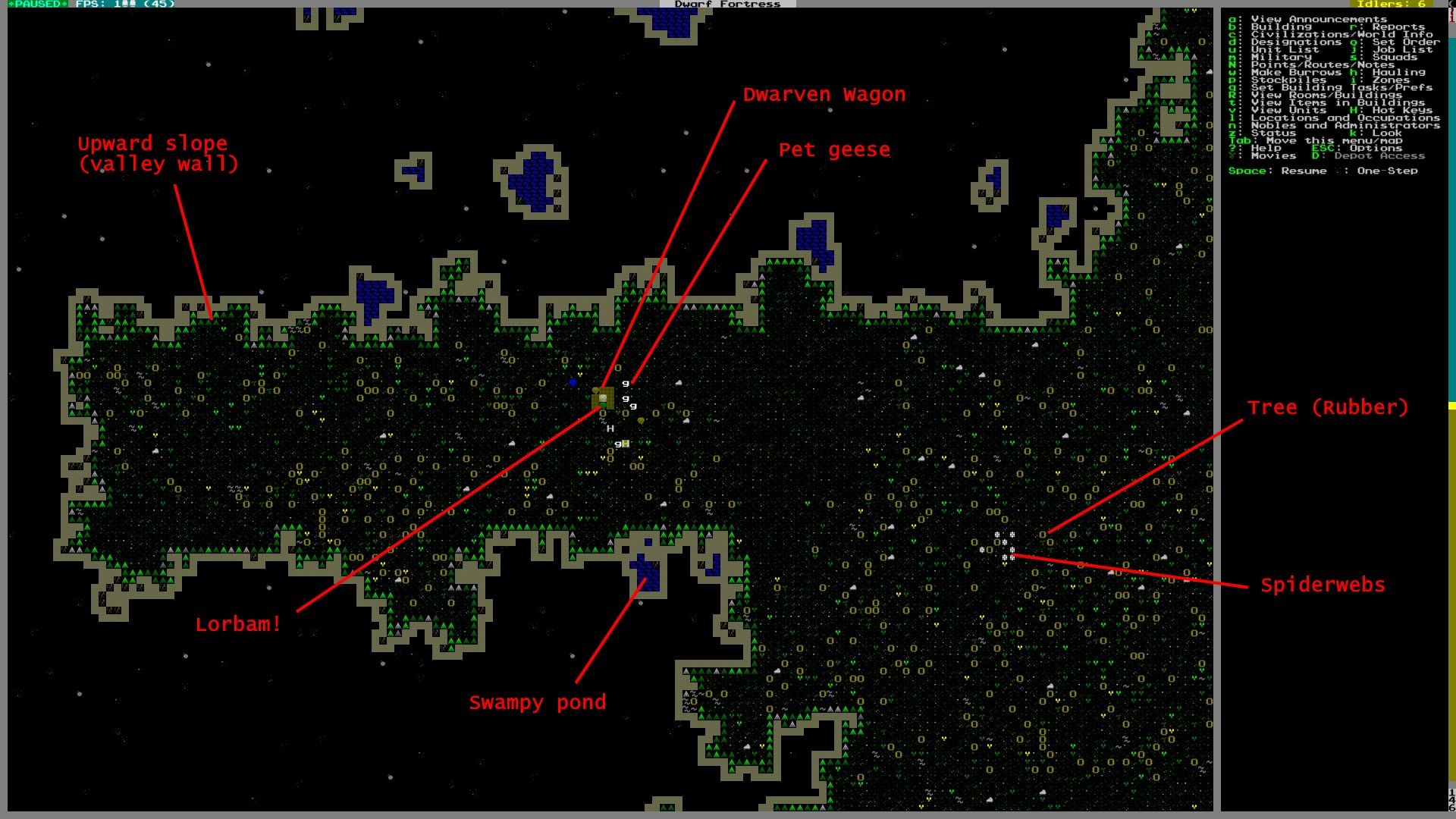 Zoomed-out shot of the Dwarves’ embarkation site. You can probably make out the valley,

The settlers have parked their wagon in a shallow valley, floored with black sand and thick grass, and thronging with tropical fruit trees. The air is thick with the smell of rotting fruit. Up on the valley’s walls, toads plop into murky pools, while rattlesnakes and weasels slither through the mist beyond its mouth.

Rakust, the expedition’s carpenter, lays into the trees, looking to fell enough macadamia wood to build a stockade across the valley’s entrance. He’s a small, fat dwarf with an intensely anxious disposition, who despises his friends almost as much as he despises himself. As he himself likes to say, “I’m nothing special”.

While the quivering lumberjack’s axe-strokes echo down the ravine, his comrades Nil and Ineth begin shovelling sand, looking to carve out a burrow for the dwarves to settle in. Nil’s a scrap of a dwarf – a stubborn, aromantic boozer who loves chains and admires brawlers, while Ineth is a coward and a nihilist whose only joy in life seems to come from eating moths and drinking cider.

With a few chambers carved out of the humid earth, the expedition’s stonecrafter, Imush, heads down to set up shop. Short even for a dwarf, Imush is a squat pillar of muscle who respects perseverance, but can barely muster any himself. Like Rakust the lumberjack, he can’t bear himself, and it seems only fitting that his favourite thing in life is “bins”. 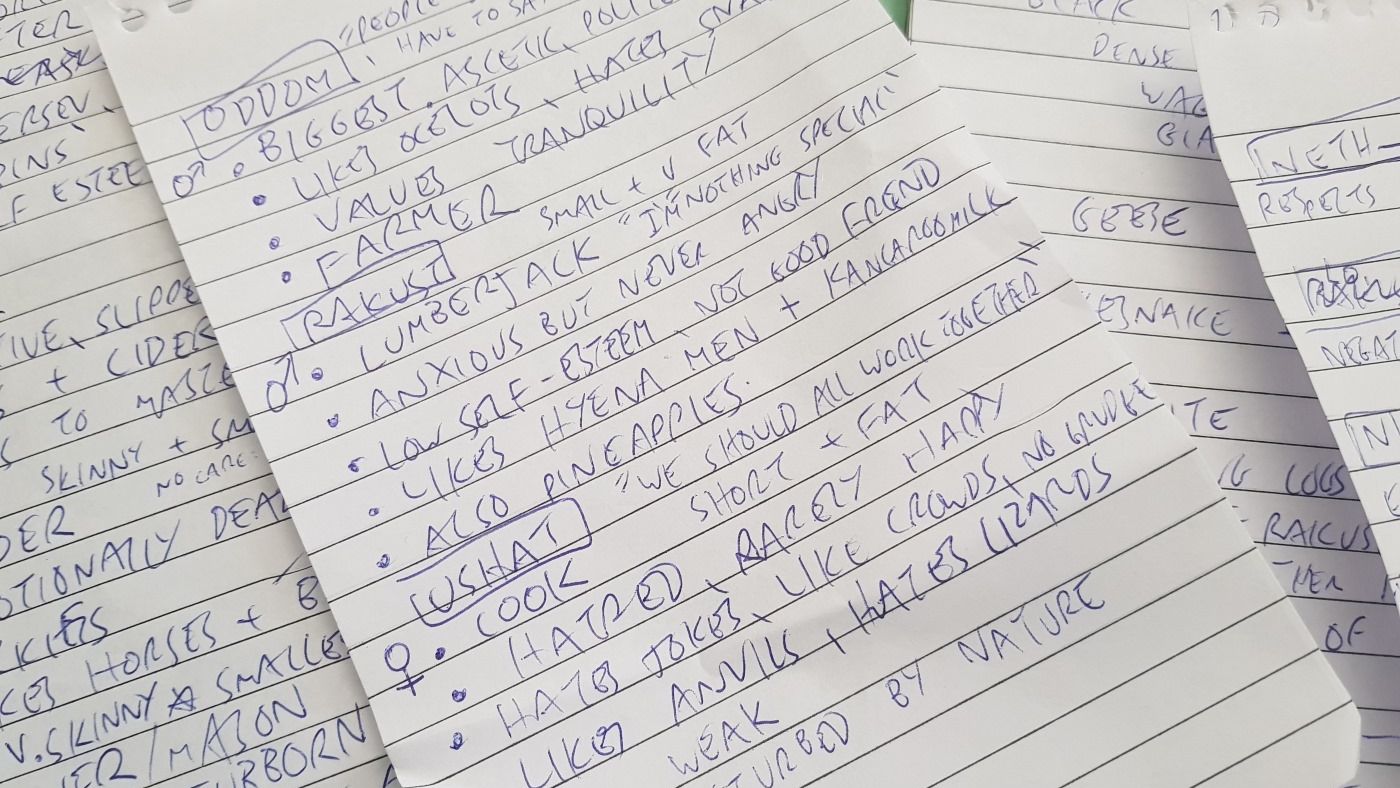 Pages and pages of scrawled notes: a classic gameplay feature of Dwarf Fortress.

Rounding out the party is Oddom, a modest, polite brewer with a predisposition for romance, who despises snails almost as much as he loves ocelots. As the others get to work, he wanders the valley, picking fruits and grains to brew with, and starting a small alfalfa patch.

Oddom will share the fort’s kitchen with Ushat, a rotund, chinless cook whose personality largely revolves around hatred. She takes particular pleasure in detesting nature, and as such is ideally suited to being the fort’s butcher. Curiously, her motto is “we should all work together”, despite wanting nothing to do with her fellow dwarves.

Unfortunately, the only food Ushat has packed for the journey is a consignment of twenty barrels of raw eagle intestines. The casks are already starting to smell queasy in the tropical heat, but Ushat doesn’t care: with an expression of grim relish, she crowbars open a barrel of sloppy grey bird innards, and slaps a few handfuls onto a baking tray to dry into crude biscuits.

Disaster strikes, as a macadamia trunk felled by Rakust crushes his left leg into a mass of gore and bone splinters. A poor omen, perhaps, that first blood has been claimed by a plant. As the anxious lumberjack groans on the sodden jungle floor, his comrades move past him to build the stockade at the valley’s mouth. But Lorbam is concerned: without their carpenter, how are they going to make cages and traps for the stocking of their marvellous zoo? 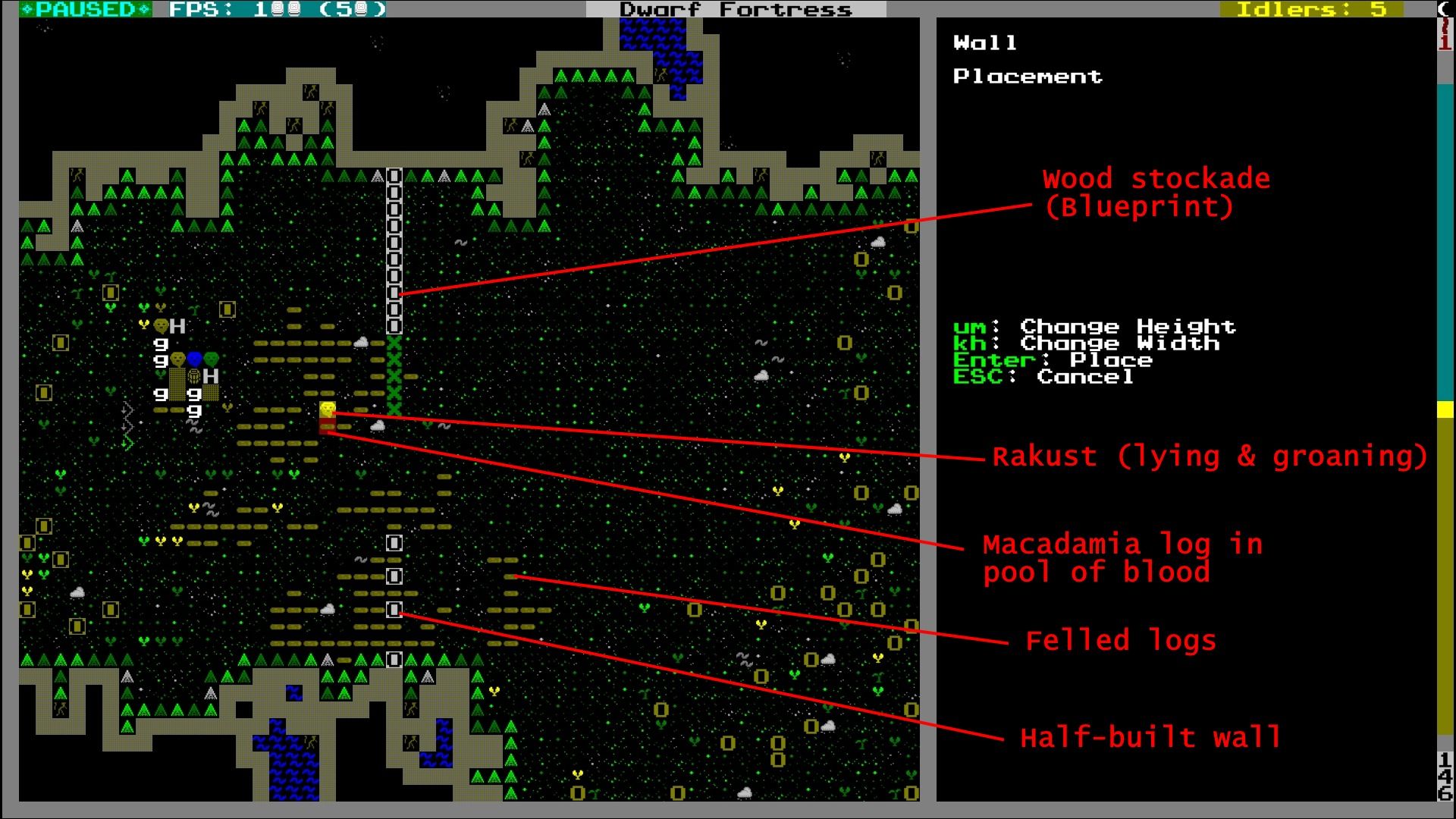 Poor Rakust becomes a victim of his own success.

She decides to take up Rakust’s axe and carry on his work herself. As she lifts the tool from his shaking hand, Rakust hisses through gritted teeth: “I’m satisfied, at least, that I managed to fell a tree.” The poor wretch.

As spring rolls on, the dwarves finish the stockade, and build a wooden warehouse in the valley to store trade goods. Below the earth, the miners have made more of a home in the black sand, hacking away at tree roots and laying out bedrooms as well as a crude feasting hall.

Late in the season, a curtain of tea-warm rain rolls in, splattering from the forest canopy and filling the muddy pools where the toads cavort. Great purple flowers spring from the black earth, and warm rivulets of peaty water trickle down the walls of the dwarves’ bedrooms. 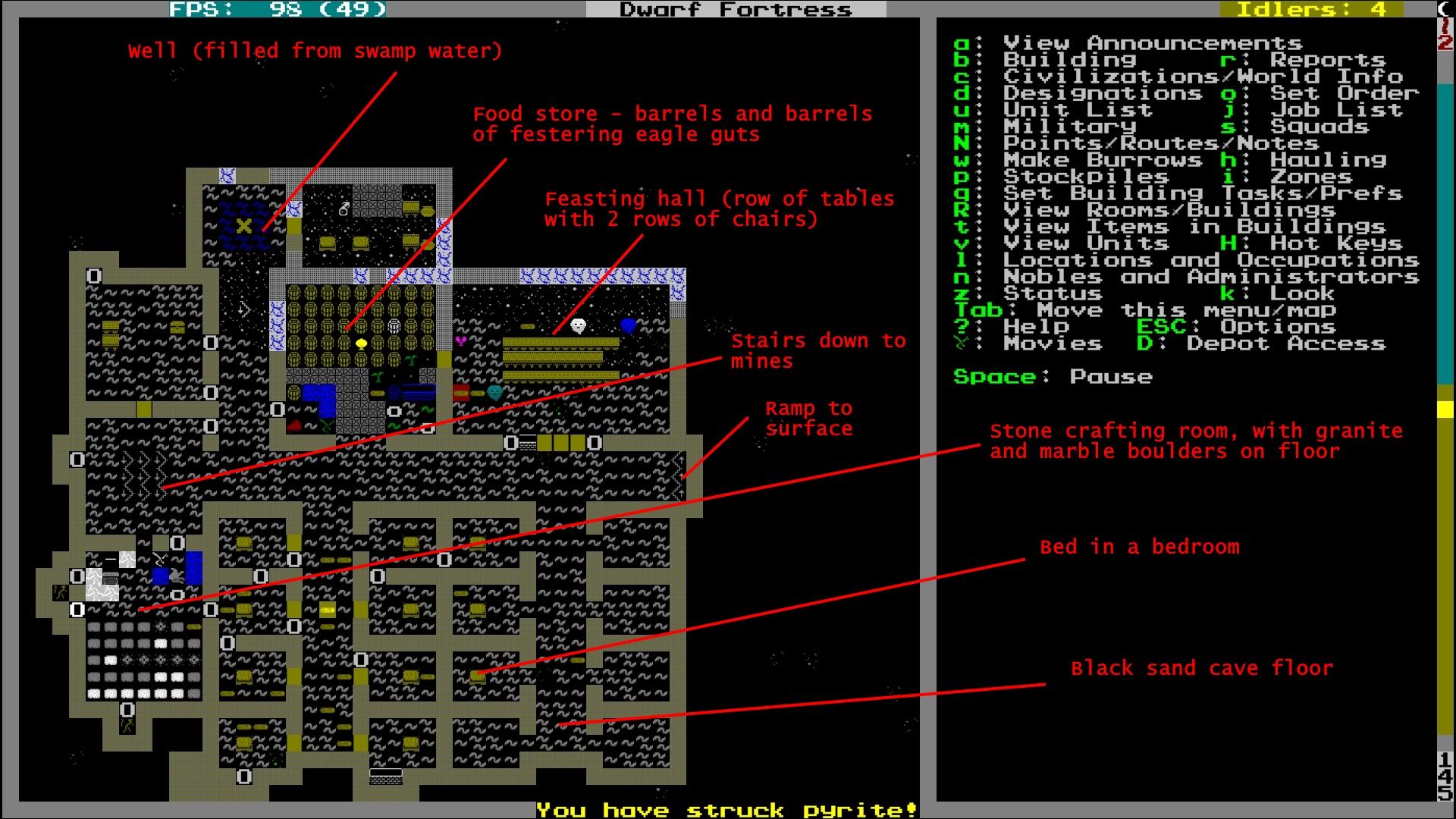 By spring, the dwarves have dug themselves a rudimentary home, like a grim digital ant farm.

More than a month after his injury, Rakust is still lying on the leaf litter where he fell, whimpering softly and reliving the trauma of being mauled by a tree. Nobody seems to be able – or willing – to help him, but Imush is at least giving him a sort of company.

The musclebound craftsdwarf is fully shitfaced, slugging back a mug of papaya wine, and staggering in circles beneath the downpour. He’s euphoric because Lorbam has made a row of palm wood bins – his very favourite – and he won’t shut up about them. “Have you seen the bins, friend?” he says for the fifteenth time, nudging the gasping former carpenter with his boot. “Yes I’ve seen the bins,” whispers Rakust through the agony of his suppurating leg, and Imush treats him to a jovial roar. “I love the bins,” he sighs. For now at least, his life is good. 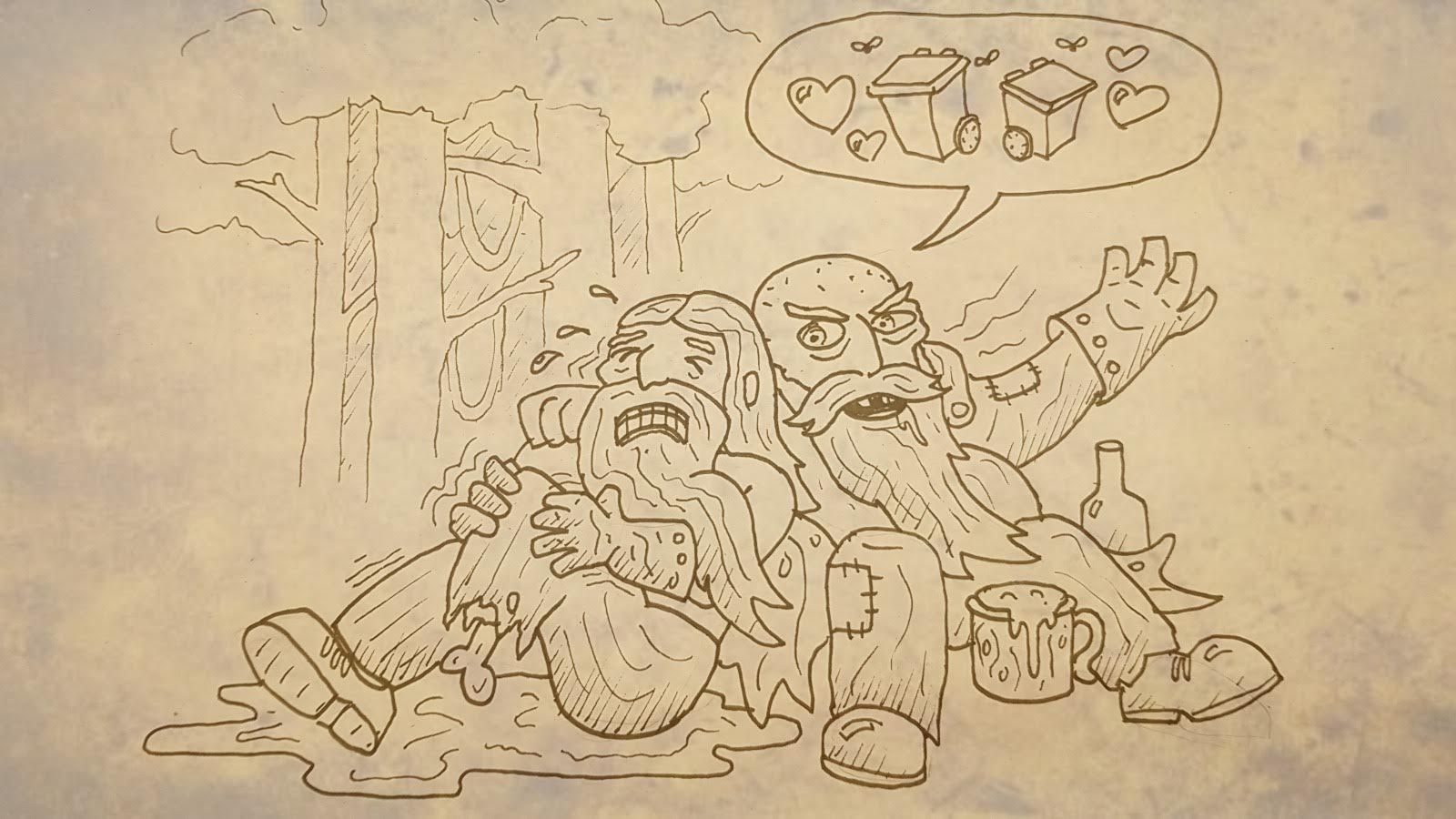 Next time on The Basement Of Curiosity: Summer arrives, and the trees claim another victim. A charismatic figure comes to town, and the basement itself is dug, gaining its first permanent exhibit. Rakust’s agony continues.

PS – if you want to learn more about Dwarf Fortress, I recommend Kruggsmash on Youtube. He’s a nice fellow and a great storyteller, and made a shockingly comprehensible beginner’s tutorial for prospective players.