It’s hard to keep your eyes off the horizon in My Time At Portia. Its valleys live in the jagged shadow of broken high-rises, buildings draped with moss and towering factories splitting apart at the seams. I needed to concentrate on the group of adorable pastel coloured llamas ahead. My presence didn’t interrupt their frolicking for a second, but I wished they’d at least try to maul me a little bit; it would make what I was about to do feel less icky. With tennis racket in hand (it was stronger than my wooden sword) I slaughtered them all, collecting what bits and bobs remained to craft a hoodie in a lovely shade of blue. One commission down, and what felt like a million more to go.

It wasn’t long before I became accustomed to the craft-’em-up’s routine: secure a job, harvest that resource, construct some item or elaborate gadget with the materials, and rejoice in the rewards. Developer Pathea Games seems to have Frankenstein’d My Time At Portia from a host of different genres, from classic RPG dungeon-crawling to relationship building à la Stardew Valley or the Harvest Moon series, to simply getting lost in its dystopian sandbox setting, all in the pastoral artistic style of a Ghibli movie.

It fails to seamlessly implement some, while addressing the more infamously annoying flaws of others. Players who find the resource-gathering grind delicious will appreciate how Portia adds new flair to a familiar formula. It occasionally plods along, and its bugs elicited more than a few frustrated sighs, but as someone who’s seen these kind of sims grow up over time, My Time At Portia feels like a fresh addition — and one that entranced me. 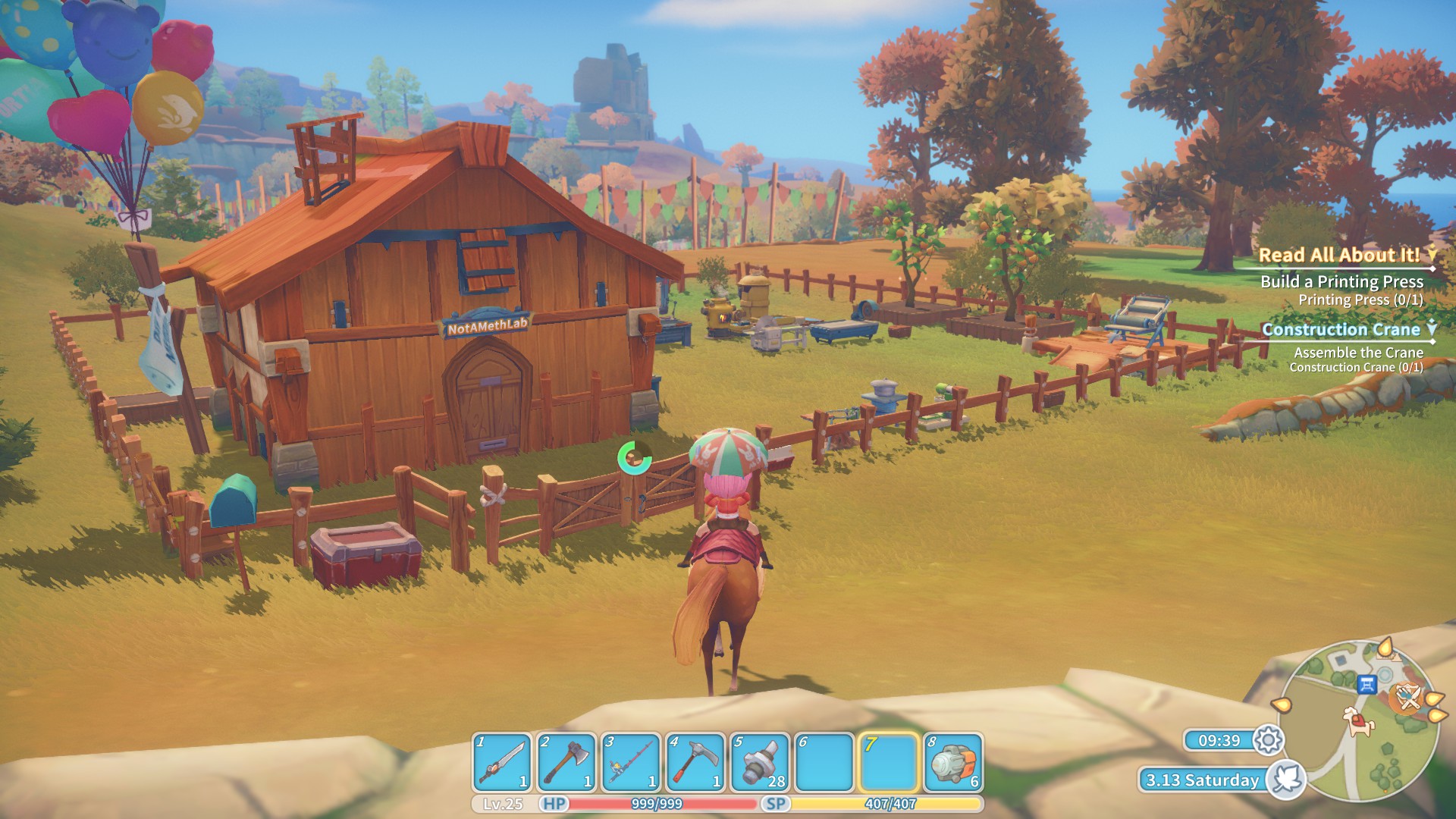 It starts with a scenario that many players should recognise. A family member has left you a derelict plot of land in a far-off town, with hopes that you’ll revitalise both the estate and its surrounding area through good old fashioned manual labour. I named my workshop NotAMethLab. The perfect cover.

Unlike Stardew Valley or Harvest Moon, My Time At Portia is set after the apocalypse, though bureaucracy seems alive and well in the aftermath. It’s your job (after securing an official builder’s permit, of course) to appease the township’s seemingly never-ending list of construction demands. Or, because this is a sandbox game, you can say screw that and go gallivanting wherever your little heart desires. A levelling skill tree divided between fighting, socialising and resource gathering helps you tailor your approach.

My Time at Portia’s advertising talked a lot about farming, but often I felt more like Bob the Builder than Old McDonald. Portia’s overwhelming supply of resources is useless without the right equipment to process it, which you’ll need to create yourself of course. Once you’ve got yourself a few furnaces and grinders, you can churn out everything from home furniture to irrigation systems and cars — given enough material and in-game time, that is.

Unfortunately, upgrading your equipment often eats up valuable resources at the absolute worst times, with a shortage of one component cascading into a weeks long scramble. At one point, I spent an hour scrounging up the wood and metal to level up my workstation so that it could create a specific resource required to upgrade my furnace so that I could finally craft the individual pieces to build whatever the hell it was I wanted to make in the first place. 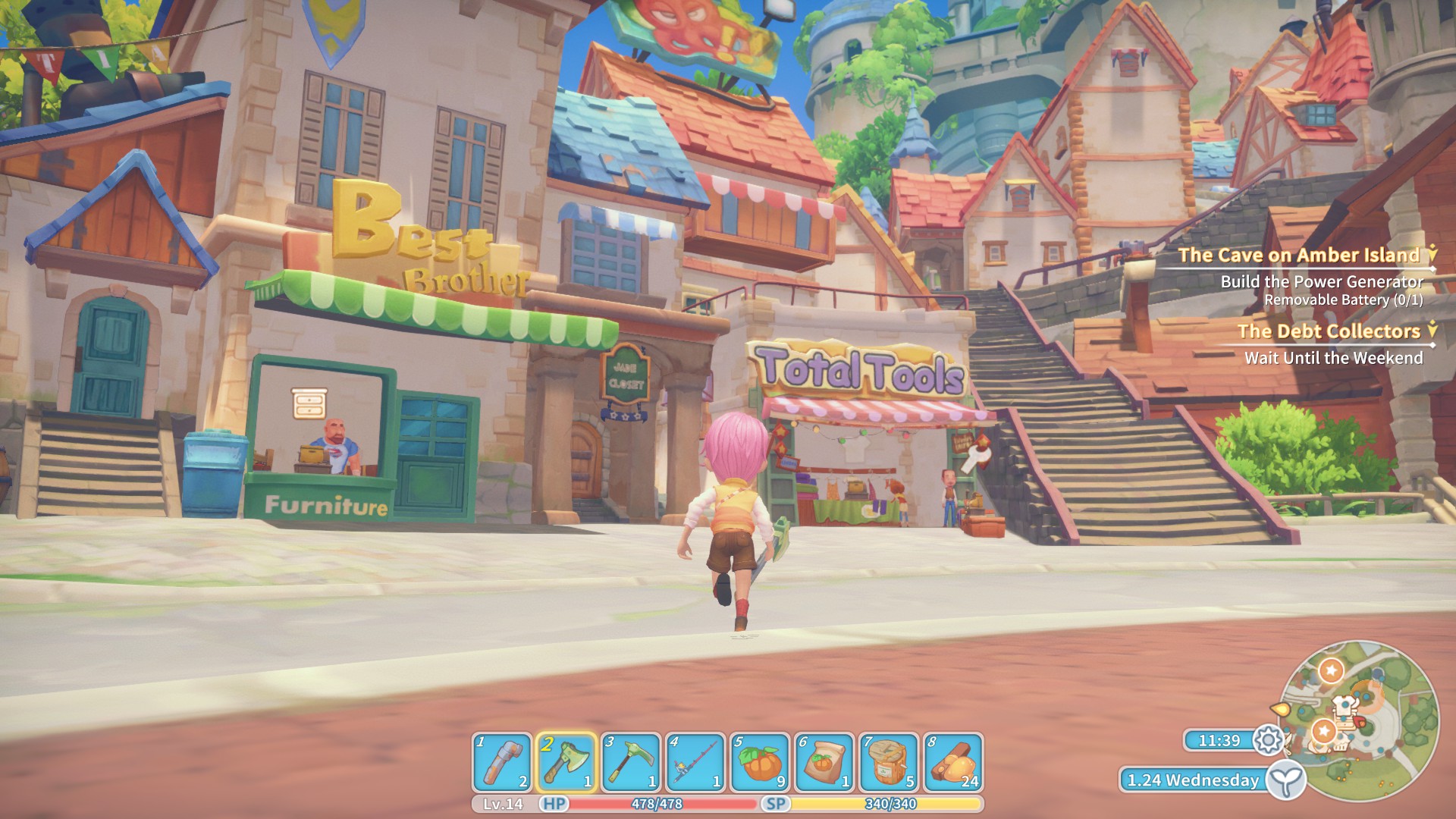 If you’d rather just skip all that noise because you’re interested in My Time At Portia as a farming sim, I’m afraid you’ll be disappointed. Completing commissions fill up your wallet faster than hawking crops ever could; my plot was nearly barren for most of the 30 hours I played. Raising livestock was tacked on as a Kickstarter goal and it shows, with milk and eggs laughably unprofitable given the high cost of land and pennies profit you make. Horses, as usual, prove invaluable for zipping around, but they’re available for rent or, even better, you can catch wild mounts. One is a giant llama with sunglasses. Riding it fulfilled a dream I didn’t even know I had.

My Time At Portia makes up for the grind in how beautifully it streamlines the usual tedium of resource management. Workstations access your entire stored inventory, so no more juggling materials in-and-out of your inventory. Working yourself to exhaustion transports you home without consequence. You can organise and deposit your day’s haul of resources in one click. Mining still requires a lot of mindless clicking for long stretches of time, but I particularly appreciated how My Time At Portia lets you forge your own tunnels instead of using pre-set levels. Plus you get a freaking jetpack to zip back to the surface.

My Time At Portia offers an expansive environment to explore, and it’s downright gorgeous. Environments range from toxic wastelands, teeming with violent mutants, to sprawling deserts and abandoned ruins. The ever-present backdrop of humanity’s industrial corpses makes trudging over its huge map feel less like a chore and more like a jaunt through a Fallout game, even if I had to provide the Bing Crosby music on my own. 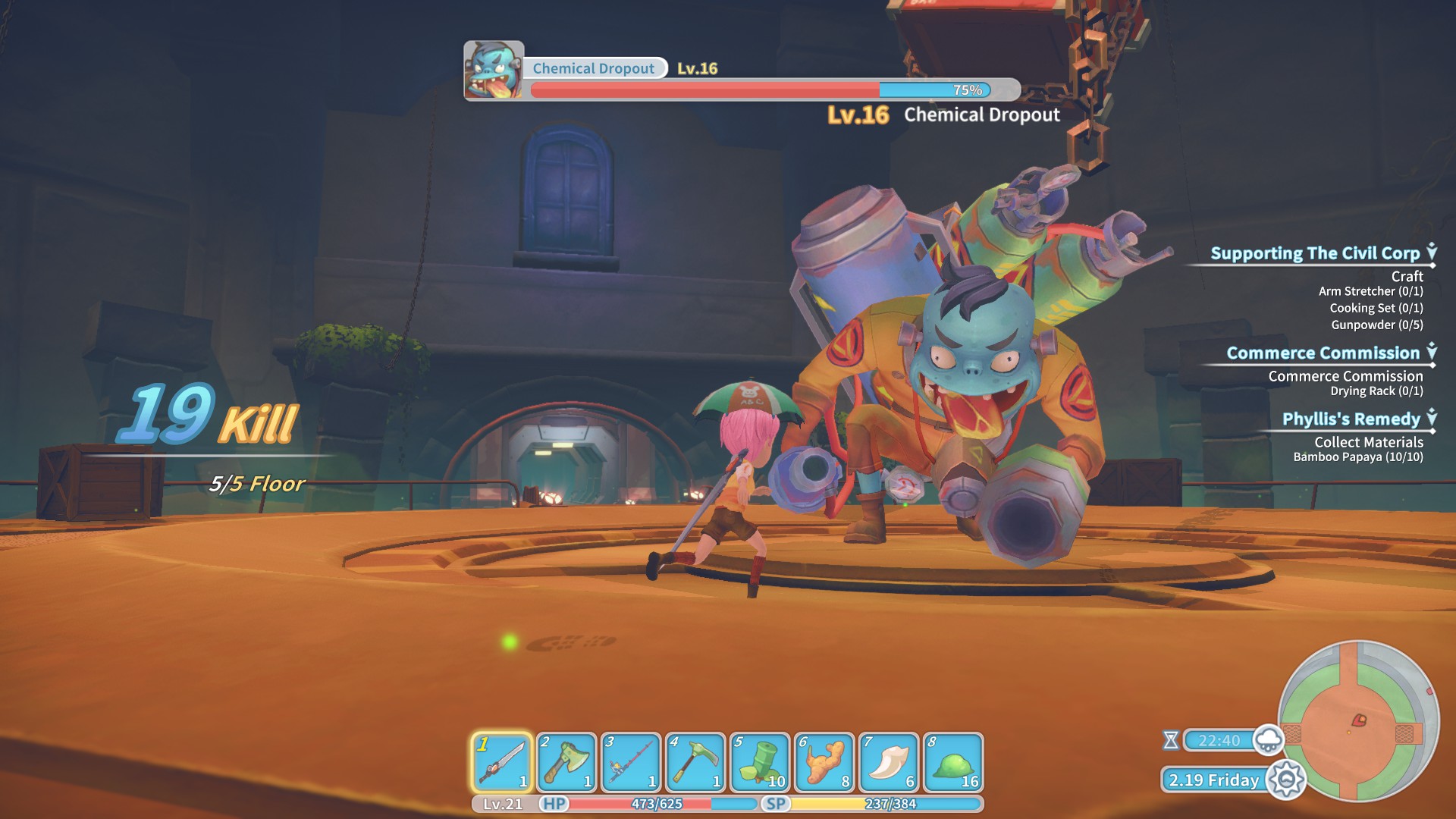 Many of the ruins are procedurally generated dungeons outfitted with talking rats, mutated fish and what are probably zombies (they’re vaguely human-shaped?) waiting for you to mow them down. Unfortunately, My Time At Portia’s indie wiring pokes through most severely here, even after a year in early access. I knocked more than a few baddies behind walls, most bosses boil down to spamming attack underneath them, and dodging shrinks your hitbox so ridiculously you become damn near invincible. A few platforming levels did a great job breaking up the monotony for me, though. They made me nostalgic for those wacky ‘90s RPGs, back when developers threw anything and everything into the genre to see what stuck.

Whenever the crafting grind started to wear me down, Portia’s dystopian themes piqued my interest enough to continue for another hour, then another… I perked up whenever townsfolk mentioned something called the Age of Darkness, when mankind was driven underground by their avarice and technological advancement. Frustratingly, these brief asides are the most you get, as My Time At Portia uses its post-apocalyptic trappings as not much more than window dressing. A satellite from a spaceship crash lands early in the game carrying a centuries-old robot. While everyone else fretted about what to do with it, I couldn’t get over the fact that there were still spaceships buzzing around in Portia’s atmosphere and no one had bothered to mention it.

Current day Portia feels positively alive with sojourning tourists in outfits that change based on the weather, and townsfolk bustling through their daily routines. Winning them over is no different than in Stardew Valley, Harvest Moon or any of their ilk; after all, what self-respecting relationship doesn’t involve daily presents? My Time at Portia does try to make the process more interactive with mini-games once you hit certain milestones, some of which seemed weirdly age inappropriate — you don’t often see a grown man playing on a see-saw — but fun nonetheless. Happily, all potential partners can be wooed regardless of gender, a feature popularised by Stardew Valley after Harvest Moon dragged their heels for decades (and one that the bisexual writing this deeply appreciates). 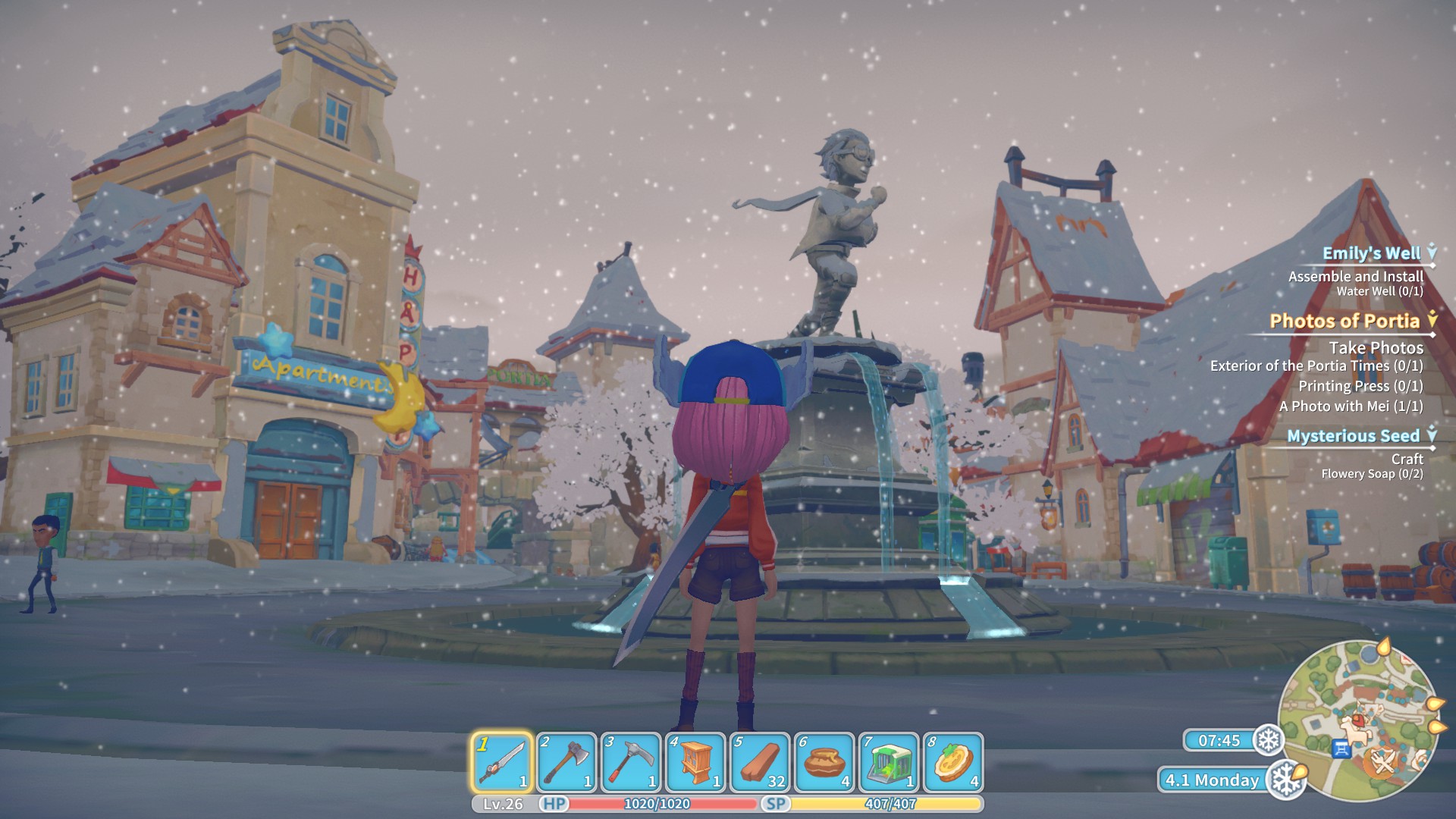 My Time At Portia reminded me of its indie roots once more as I courted my future husband. I’d just begun dating the darling leader of the town guard when he asked me to meet at Portia bridge for a trip to the neighbouring desert. The only hiccup: I hadn’t built Portia bridge yet. This broke the game. I guess the developers never planned for a player as thirsty as me.

So maybe the game’s laundry list of genres spread developers too thin (thin enough that they apparently forgot to pay some people…). And maybe the final product still has its fair share of rough edges. But despite that, I still found my hours in Portia charming. These simulators have recycled conventions for decades, both the fun and the hair-tearingly tiresome, and My Time At Portia felt like a welcome innovation too long in the making, its dystopian setting especially making a beautiful change from the many townships I’ve rebuilt before. Newcomers to the genre may find it tedious despite these improvements, but if you’re all about that renovation grind, My Time At Portia is one of the most modern takes on the genre I’ve seen in a long time.

More about My Time At Portia