Last time on the BoC: Expedition leader Lorbam captured the first set of animals for her underground zoo, and the fort gained its first warrior, in the form of Id “Snakebuster” Osustavuz. A weasel disrupted the fabric of spacetime, and two miners fell in love.

Since it went down well last time, I’m going to throw in some little kayfabe-breaking notes in boxes like this, where I want to discuss the mechanics behind a weird bit of the story, or just step out of character for a moment to explain stuff.

It’s the first anniversary of the Basement’s founding, and as the cool spring fog trickles through the jungle, it brings unusual cargo: a kobold, by the name of Fladasreelgus. He’s skulking low through the shrubs, the whisper of twigs beneath his feet drowned out by the trilling of the lorikeets, and he’s nearly at the fort’s wooden stockade – when he runs right into Oddom.

Oddom, the kind, soft-spoken brewer, is out collecting fallen starfruit to make wine, and has never seen a kobold in his life. He opens his mouth to scream, and so does Fladasreelgus – revealing that his tongue has been severed. Robbed of speech, this wretch has no hope of explaining himself to the brewer. So he just runs, as Oddom hollers for Id – the dwarf known as Snakebuster – to come and commit his unspeakable wrestling on the interloper.

The scar-crossed tussler sprints out of the stockade into the forest, but the kobold has already vanished into the gloom. Snakebuster’s hands will have to remain unbloodied today – but he knows this kobold won’t be their last uninvited guest. Lumbering back through the gates, Id returns to a fortress clamouring with the bickering of his fellows.

The fledgling zoo downstairs – currently just a dog in a cavern – is closed for refurbishment, with a grand reopening just days away. Lorbam wants the new Basement to feature a green glass vivarium full of her recently acquired lizards, but Udil – the colossal manager of the fort, who’s been acting as its mason, and now its glassmaker – has no clue how to make one.

She’s gesticulating furiously, stone jewellery clacking, as she explains she’s not even got any bags to collect sand for the furnace, and Lorbam is losing patience. It’s Snakebuster who solves the issue: stomping away from the confrontation, he grabs a stack of festering rattlesnake skins from his Trophy Bin, and sews them into crude bags, before dumping them on Udil’s worksurface with a grunt. It’s a start.

The scene above is partially artistic license, to account for the fact that DF’s glass industry is a bit fiddly, and it took me until the next episode to remember how to build a terrarium. The snakeskin sandbags were real, though. 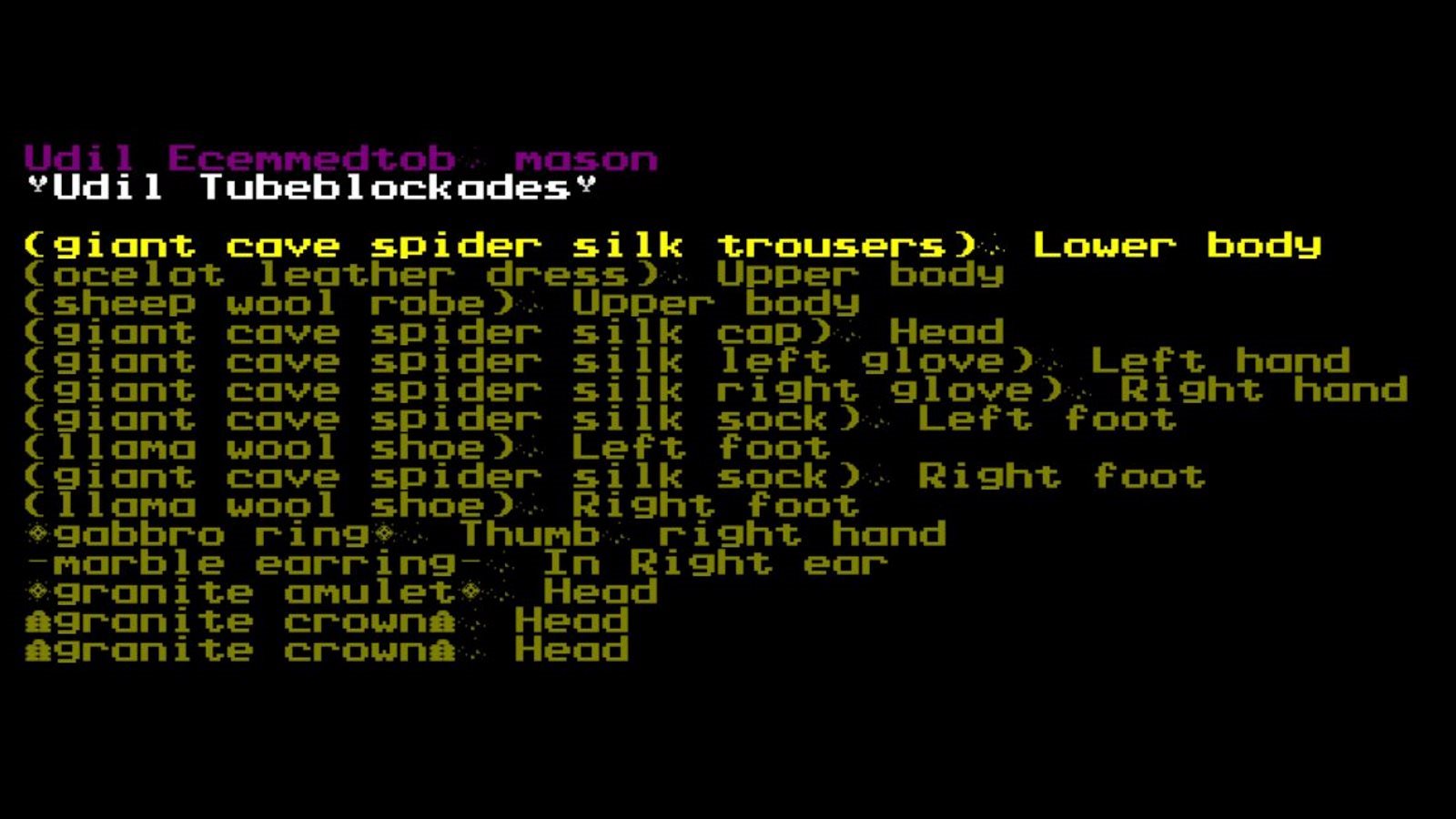 Can I just point out that Udil’s attire absolutely slaps? This giant lady dwarf is wearing silk gloves, an ocelot leather dress, and two magnificent granite crowns. I think I’m developing a bit of a crush on Udil.

With the terrarium project advanced, the Basement is nearly ready for the big day. The cages for the birds and monkeys are forged, and the walls are smoothed out after months of chiselwork by Udib, an engraver who arrived last Autumn. The observation mezzanine has been dug out, and furniture is being carved to fill it. Lorbam is just wondering what the zoo needs as a finishing touch, when an Elven trade caravan appears at the valley’s mouth… with a caged cheetah in tow.

Fade in to: a cheetah on the end of a rope, in what used to be the weasel pit, turning sadly to camera with a look of profound weariness.

Zoom out to reveal: a crowd of cheering dwarves around the pit’s edge, celebrating the grand reopening of the Basement. 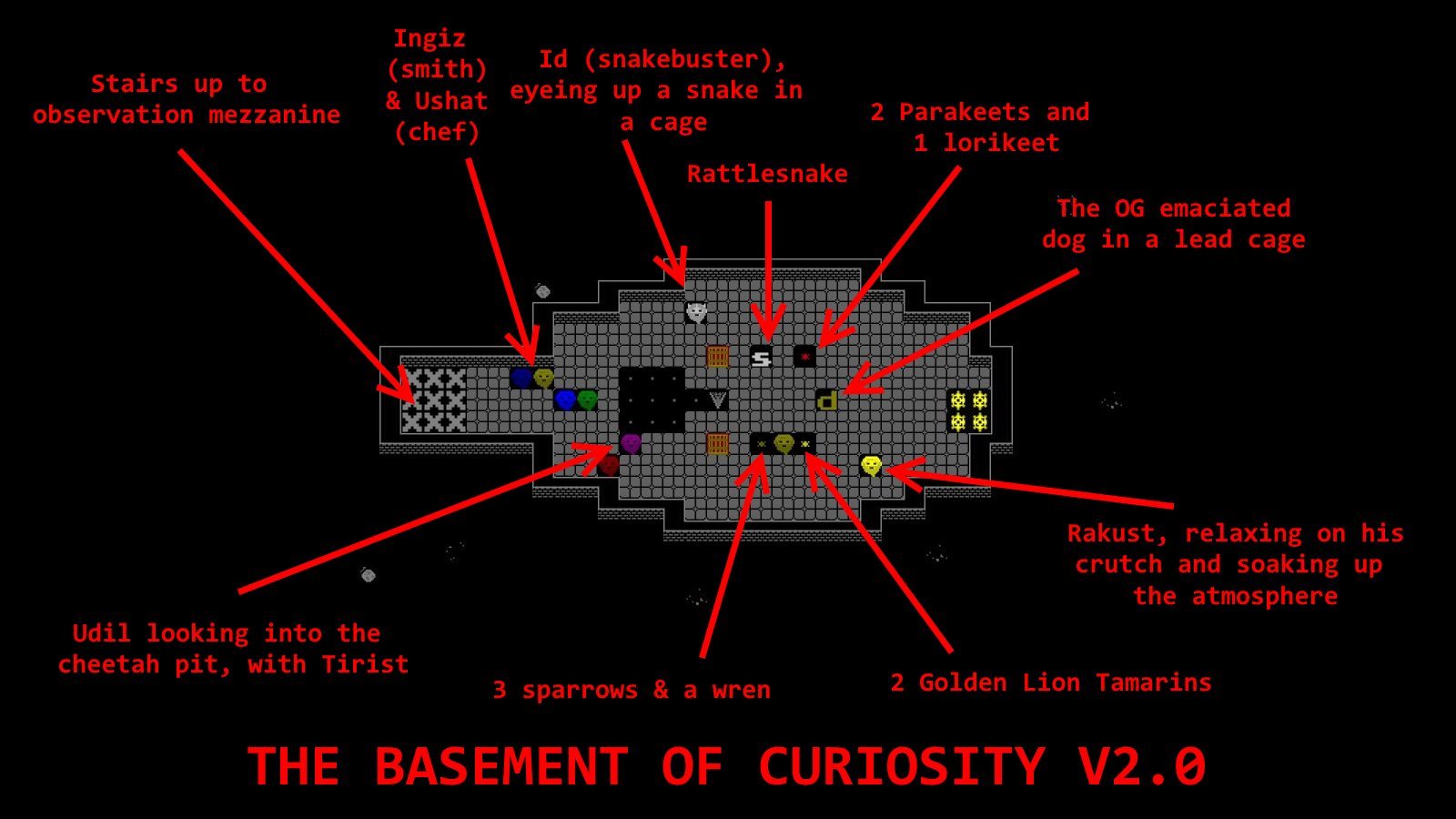 The grand reopening. There’s still a long way to go – the vivarium isn’t set up yet, and Lorbam wants considerably more big cats in pits – but it’s really coming along. Also, as a small easter egg – it’s cool to note that the kid standing next to Udil will become her apprentice as a mason at the end of the year. Maybe this was a work experience shadowing scheme or something?

At this moment, the fortress’ very first baby is born – slithering out onto the stone, right there during the grand reopening. The new arrival, named Amost, is the daughter of the solemn farmer Avuz, and her monstrous husband, Snakebuster. True to her lineage, Amost is already “incredibly tough and mighty”, and fulfils her mother’s dream of raising a family – making her the only dwarf in the fortress to have satisfied a life goal. Lorbam is delighted for her colleague, and sees the birth as a sign of favour from her god, Zon.

Zon is one of the more popular gods among the dwarves of the Basement, and takes the form of a female dwarf associated with war and fortresses. I’ll go into the whole pantheon in more detail a future episode, but it seems fair to say that Zon, as Lorbam’s chosen god, is the first you should know.

But what of little Amost’s father? Dad’s out in the woods, kicking a snake. At the exact moment his daughter is born, Id “kicks [a] rattlesnake in the head with his right foot and the injured part is smashed into the body, an unrecognisable mess.” Nevertheless, a look into his mind reveals that – even as he bloodily inverts the business end of a serpent – he is welling up with pride at the weird, telepathic knowledge of his daughter’s birth. 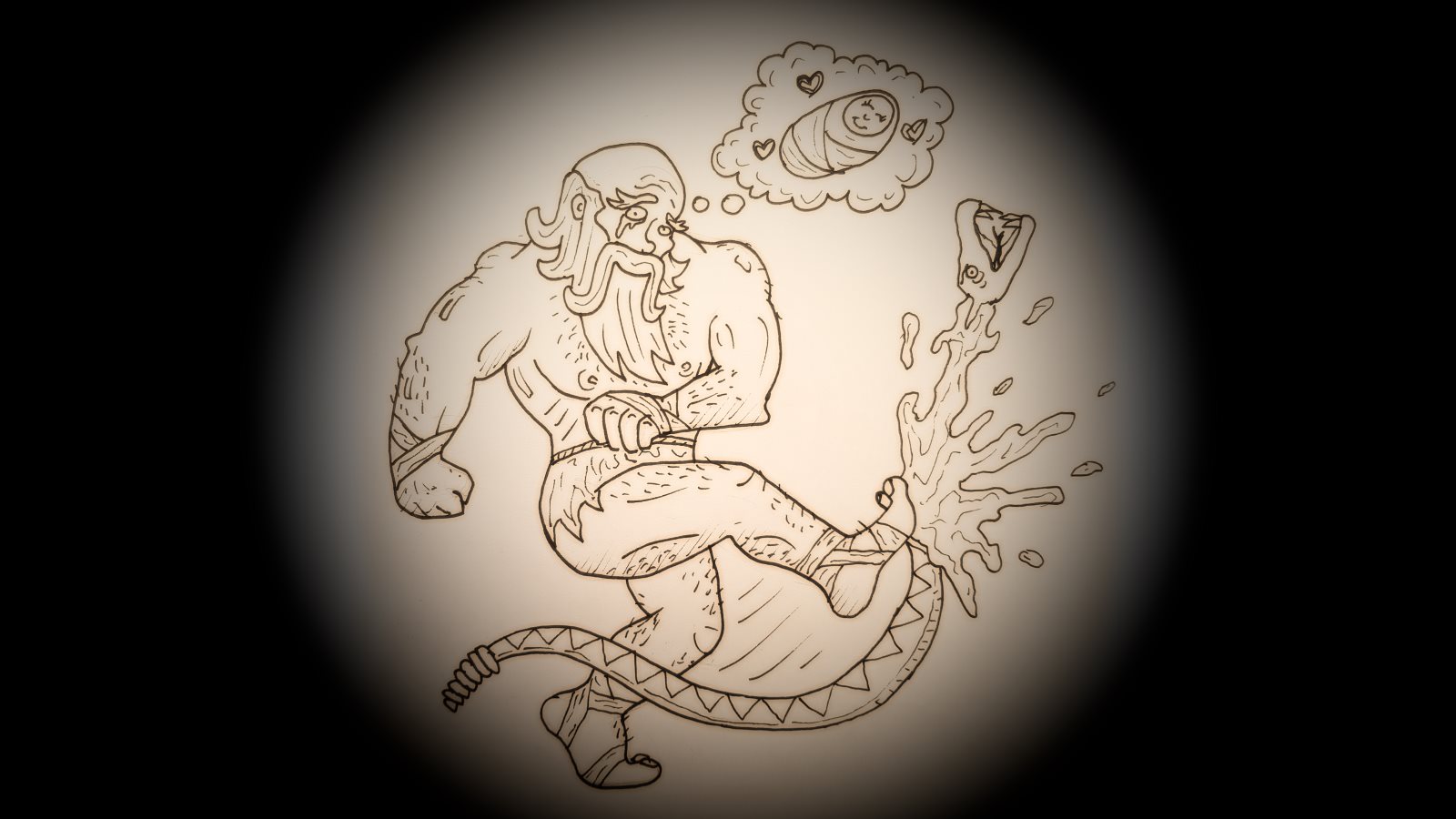 In his own way, Id is celebrating.

As the valley starts to heat up for the summer, a great hooting and hollering comes from the south: a huge train of migrants is approaching, preceded by a herd of domestic animals. They are 24 in total, outnumbering the fort’s 18 residents, and all are clamouring for work at this exciting new zoo they’ve heard so much about. Clearly, word of that cheetah on a rope has really stirred things up back at the mountainhomes.

Leading the column is a family of three – Dodok, Goden, and their son Adil – and the first thing they see as they approach the valley is Id, swelled up with pride at his new daughter, thrashing the life out of a snake. The wrestler gurns a brutal grin at them as they pick their way through the gore-strewn glade, just daring them to say anything, but the immigrants seem unfazed.

Just as the new arrivals are unpacking, a pack of eleven dingoes comes loping through the jungle. They’re the first large animals to be sighted in the valley since that leopard nobody really feels comfortable talking about, and their yapping causes a lot of excited chatter. The wild dogs scamper out of range of the fort too quickly for a trapping operation to be set in motion, but Lorbam sees them as another good omen from Zon.

With the zoo looking good, and this huge new labour force thirsty for work, surely Lorbam can’t keep her people living in a series of holes dug from the wormy loam? No: as the clouds split and the summer monsoon begins, the expedition leader makes an announcement: it’s time for the dwarves to build the fortress they deserve: it’s time for them to strike the earth.

Possibly the best way to express this sequence of events is as a montage, so please read the following bullet points while listening to something jaunty but determined, and make sure to imagine lots of brief shots of dwarves high fiving, or cracking the heads off weasels etc.

Dwarven Trivia: Id’s surname – Osustavuz – means “tamedmine” in DF’s dwarven language. By sheer coincidence his wife’s name also happens to be Avuz (‘mine’). Whether Id’s surname could be read as “tamed by Avuz” or “has tamed Avuz” is immaterial: the very idea that either of these powerhouses could be “tamed” by the other is probably a source of some lols to them both. 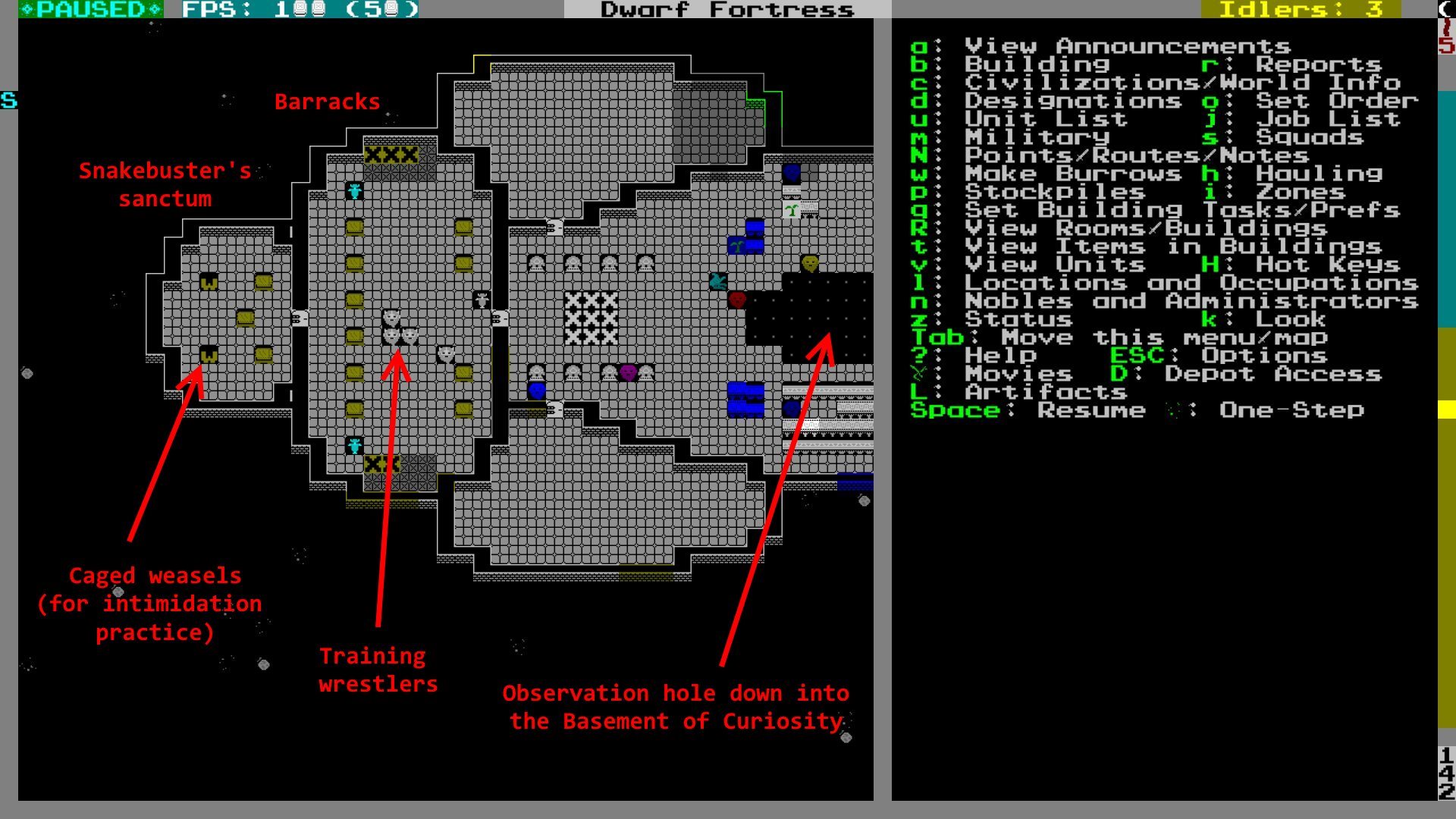 This screenshot is from a little later on, with all the stone smoothed out. Looks nice, right?

With all this work thundering along, Lorbam is feeling jubilant. Indeed, she figures it’s finally time to treat herself. So, as the summer solstice approaches, she orders her tower built further above the treetops. At its top, she decrees the construction of a grand penthouse containing a bedroom, a statue-adorned dining hall, and a study for her to luxuriate in. The new floors will all be clad in fresh-hewn granite, quarried from the great chambers where Imush is building his new stoneworks. 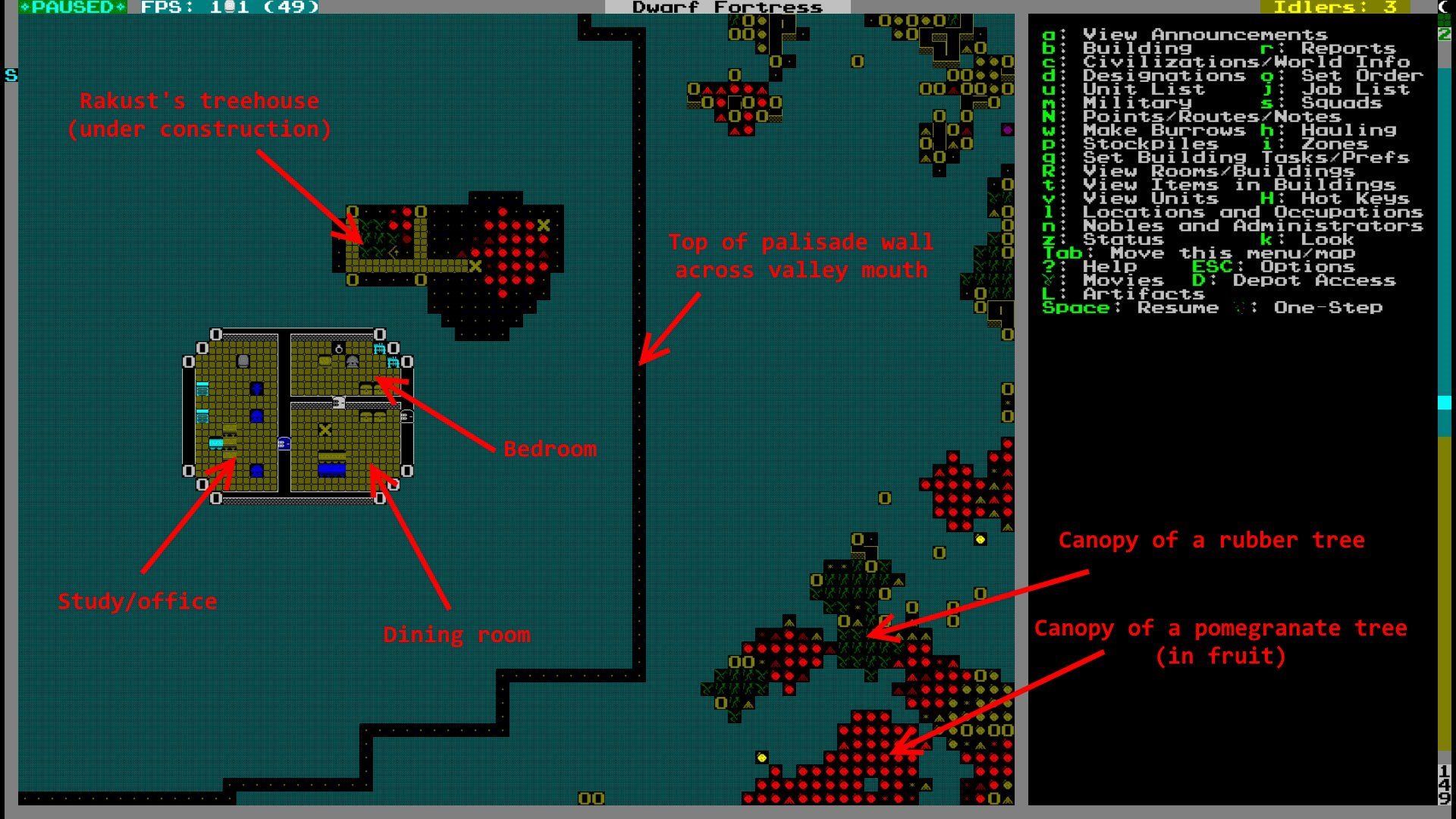 This is what the area about eight metres off the floor of the fort’s home valley looks like. One of the problems of illustrating a DF game is the fact you can only view one storey-high slice of the world at once, like a sort of microscope slide where the bacteria can cry and build cabinets and twist animals to pieces.

The dwarves work cheerfully, singing while they build this monolith for their leader. But their merry working songs soon turn to shouts of alarm as they complete the small attic above the new quarters.

Because even though Lorbam is down below, staring at her cheetah on a rope, a pool of her blood is spreading beneath the workers’ feet, appearing from nowhere. It’s cleaned up before the expedition leader can hear of it, but it causes the builders to fret. Is this, too, a message from Zon? Some kind of dire portent; a warning against hubris?

As those who saw the Blood swear a pact never to speak of it in front of Lorbam, a horn blares out from the jungle, and their eyes grow wide. It seems the future is at their gates already…

This was a seriously weird occurrence, and I have no idea what was behind it. My only theory is that the rainwater filling the fort’s well overflowed, and spilled over into the hospital, diluting traces of Lorbam’s blood from the previous year, and then getting on the boots of the builders? But then, if that was the case, why did it only appear when the builders got to the top of the tower? Occam’s razor would suggest that Dwarf Fortress is haunted. 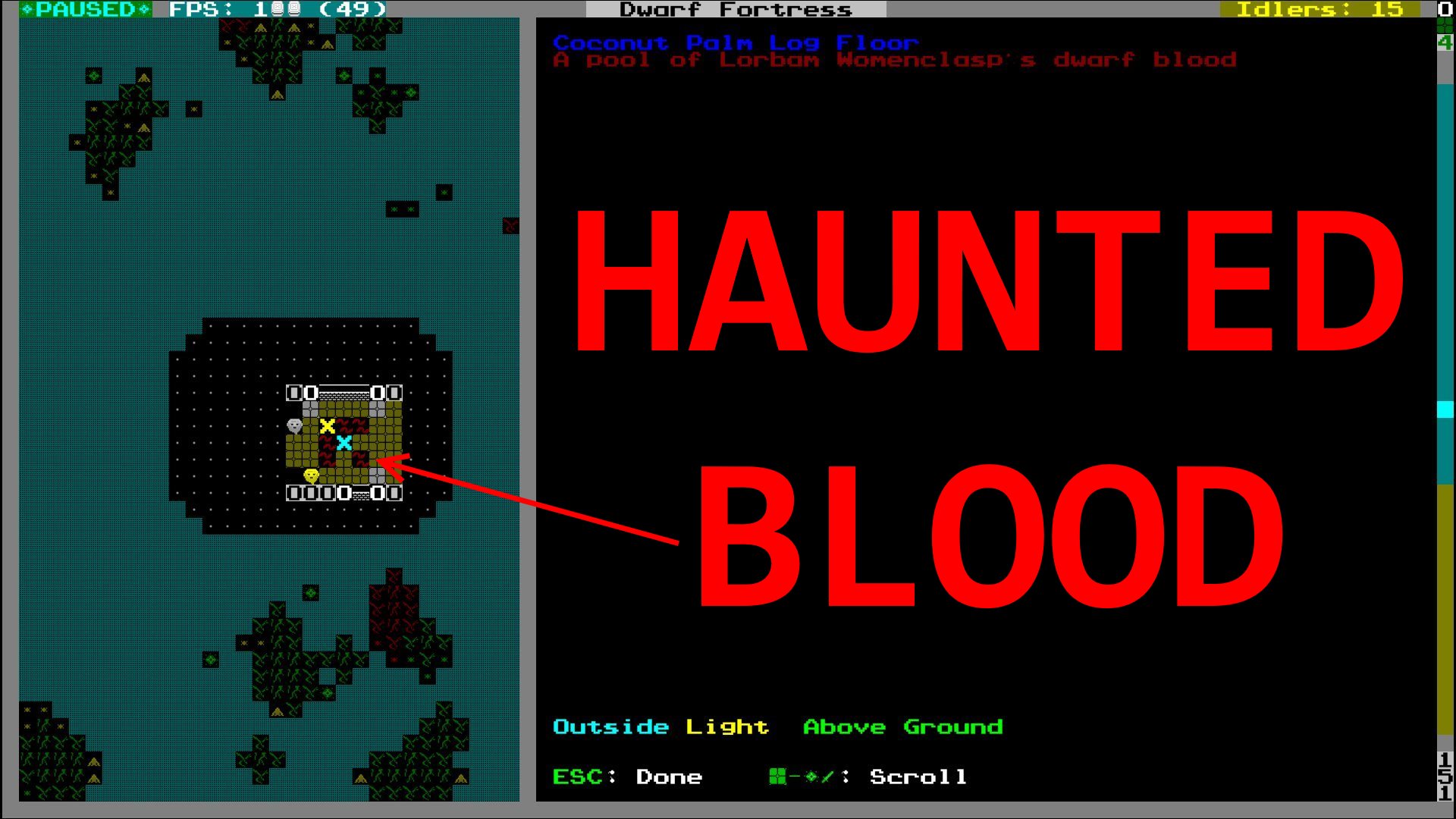 I love it when the game does this shit.

Next time on the BoC: Gentrification and duelling artefacts, a giant goosekeeper moves in, and Id finally meets his match.