Every game of Into the Breach tasks you with just about the biggest, most noble mission there is: save the world, this tiny watery globe we call home, from giant bug attacks, over and over again. But it also offers a smaller, more personal mission that’s a little easier to get your head round: save one specific person. At the end of a game – success or failure – you get the option to bring one of your surviving pilots over into a new timeline. I always pick Isaac.

Isaac Jones, the stammering time-travel researcher with the ability to give your squad an extra rewind. I’m in agreement that he’s the game’s best pilot, though where Alec found Isaac an annoying presence, I would defend his constant pessimism and discomfort with the whole kaiju-killing situation.

There’s a description tucked away in the game’s files that compares Isaac to The Good Place’s Chidi Anagonye, and I find both characters’ outwardly-projected hesitation reassuring for the same reason: it’s immensely relatable. I would not be the hero cracking wise every time my mech pushed a bug into the sea. I’d be wringing my hands at the controls.

Into the Breach does a great job of building a connection to its characters with very little. Their personality is delivered through single lines of dialogue, occasionally sprinkled on top of the game as you play. 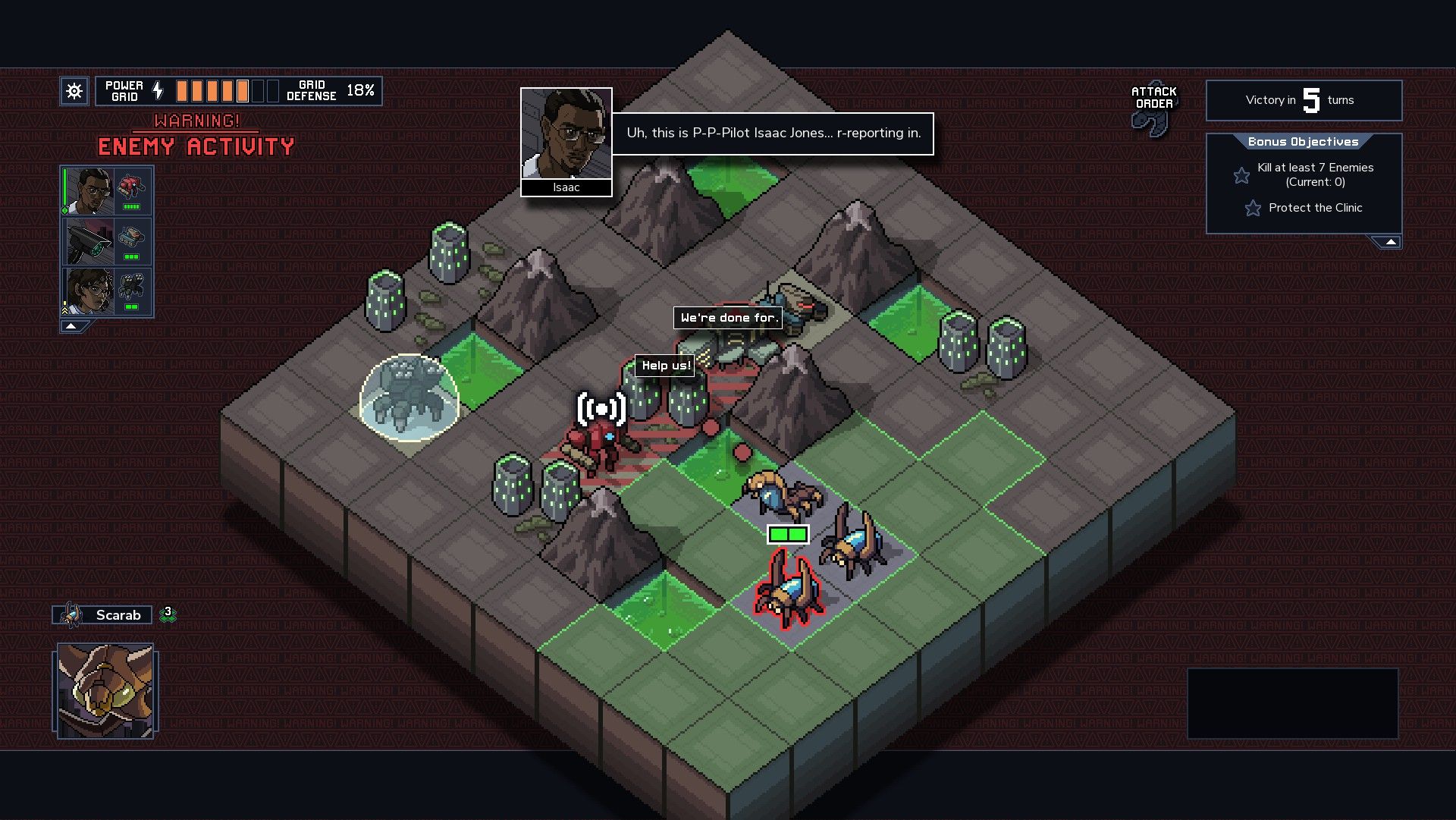 It’s not like XCOM, where you can tailor each soldier to your precise needs, creating an emotional bond because you’ve named them after a friend or invested time picking the perfect hat for them. Into the Breach’s pilots are set characters. Which is important because (again unlike XCOM) there’s not much mechanical incentive to stick with a single character.

Pilots do gain XP with each bug they finish off, granting them new abilities, but there are only two levels to that. You can expect to max out most characters very quickly (within a single decent playthrough). Once they’ve reached that 50 XP cap, each kill is just wasted calories.

Nevertheless, I stand by my man. My affection for that tiny pixel portrait, a familiar face at the top left of my screen, snowballs as quickly as the experience points.

Which is why my Isaac is now on his eighth timeline, a journey that has taken (thanks to my tendency to dip in and out of Into the Breach) probably six months of real time. He’s fought alongside his alternate-universe sister, Bethany, who never existed in his native reality. He’s faced enormous boss monsters, gigantic purple hornets and scorpions and in one case an amorphous, self-replicating blob of goo. He’s travelled beneath the crust of the earth to plant a bomb that I can only presume is filled with bug repellent.

Only in one of those eight timelines did we actually save the world. 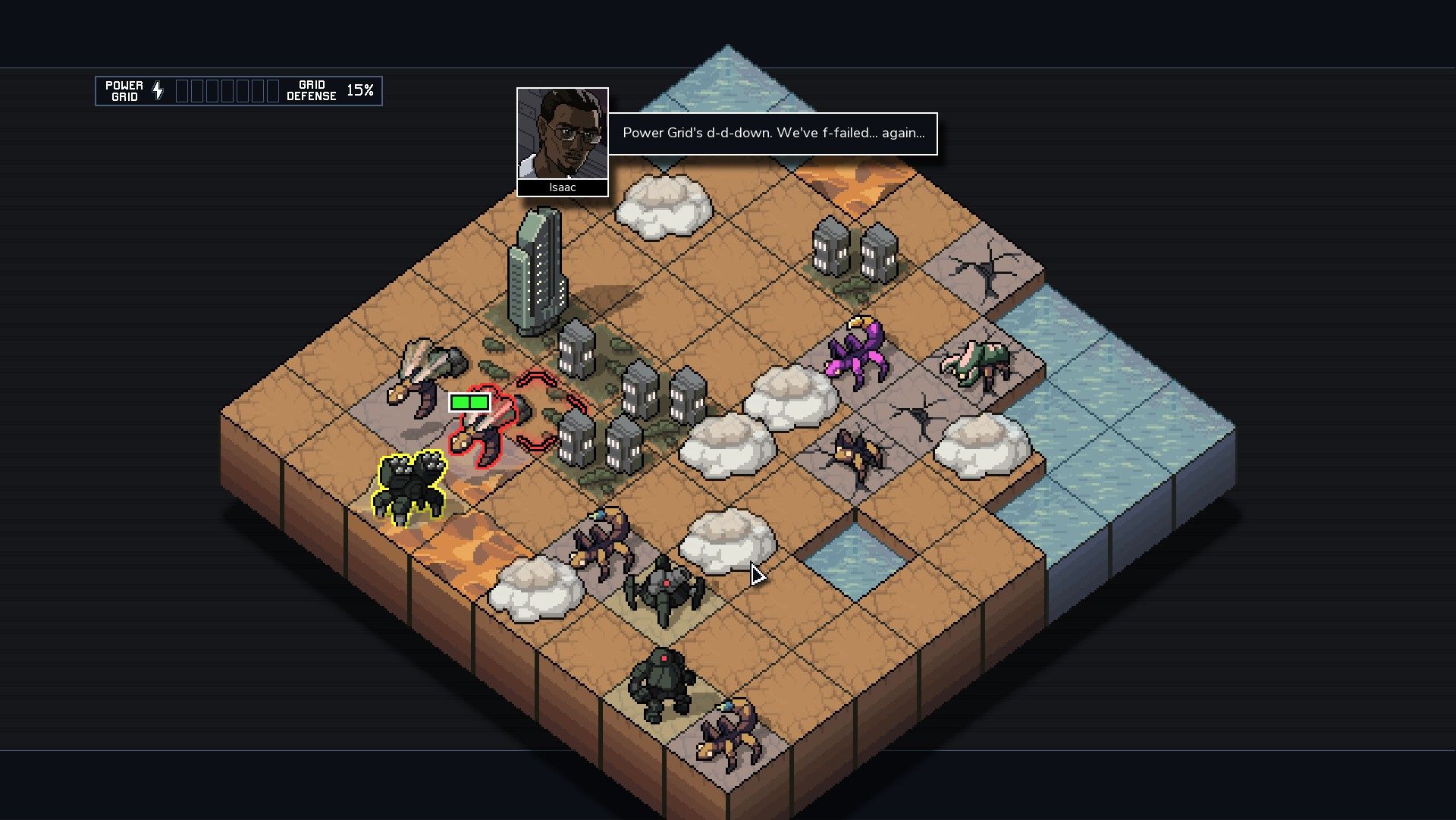 What kind of toll would that take on a person, let alone one as anxious as Isaac? “S-s-same islands as before – and the s-s-same war,” he said once, on landing in a new reality. “Isn’t it madness to keep r-r-repeating one’s actions?” Sometimes I wonder if it’s cruel, thinking back to his words when we first met: “S-s-so many deaths, and I’m b-b-back as if nothing happened… w-w-will there ever be an end to this?”

Maybe I should pick a new pilot at game’s end, or just let Isaac fall in battle. Release him from this eternal loop.

I don’t do that, of course. Instead, I find myself semi-consciously positioning him so the hits land elsewhere. Prioritising his safety over, you know, the world. There will always be another world to save. And okay, I could always just pick a fresh Isaac from the game’s start menu, or discover one behind the door of a time pod. But then, that wouldn’t be my Isaac.

Tagged with feature, Subset Games, The Joy Of, Into the Breach.