When I tested Adata’s XPG SX6000 Pro SSD at the end of last year, I called it a tempting budget alternative to some of our SSD champions such as the Samsung 970 Evo and WD Black 3D. The same could also be said of Adata’s new XPG SX82000 Pro, which is more upmarket than its SX6000 Pro sibling with its claimed sequential speeds of up to 3500MB/s read and 3000MB/s write, but is still a good chunk of change cheaper than either the 970 Evo, WD Black 3D or WD’s latest NVMe SSD, the Black SN750. Can it compete on everyday random speeds, though? Let’s take a look.

Available in four sizes – 256GB, 512GB, 1TB and 2TB – the SX8200 Pro immediately sets itself apart from other NVMe SSDs by coming with its own heatsink strip in the box. The thermal compound is pre-applied, too, so all you have to do is stick it on, giving it a sleeker look and (theoretically) better cooled innards in the process.

Indeed, the 512GB model of the XPG SX8200 Pro I was sent for review put in a very decent performance in AS SSD’s 1GB sequential test with the heatsink applied, finishing with a read time of 2030MB/s and a write time of 2161MB/s. The former might not sound particularly great given its supposed ceiling of 3500MB/s, all told, but several other NVMe SSDs I’ve tested in my Intel Core i5-8600K, 16GB RAM system with similar mid-3000MB/s sequential read times have all come out much the same way, including the WB Black 3D, WD Black SN750 and Samsung 970 Evo Plus. Only the regular 970 Evo has come anywhere close to its claimed 3500MB/s sequential read time, and even then I only recorded a score of 2954MB/s at time of testing. 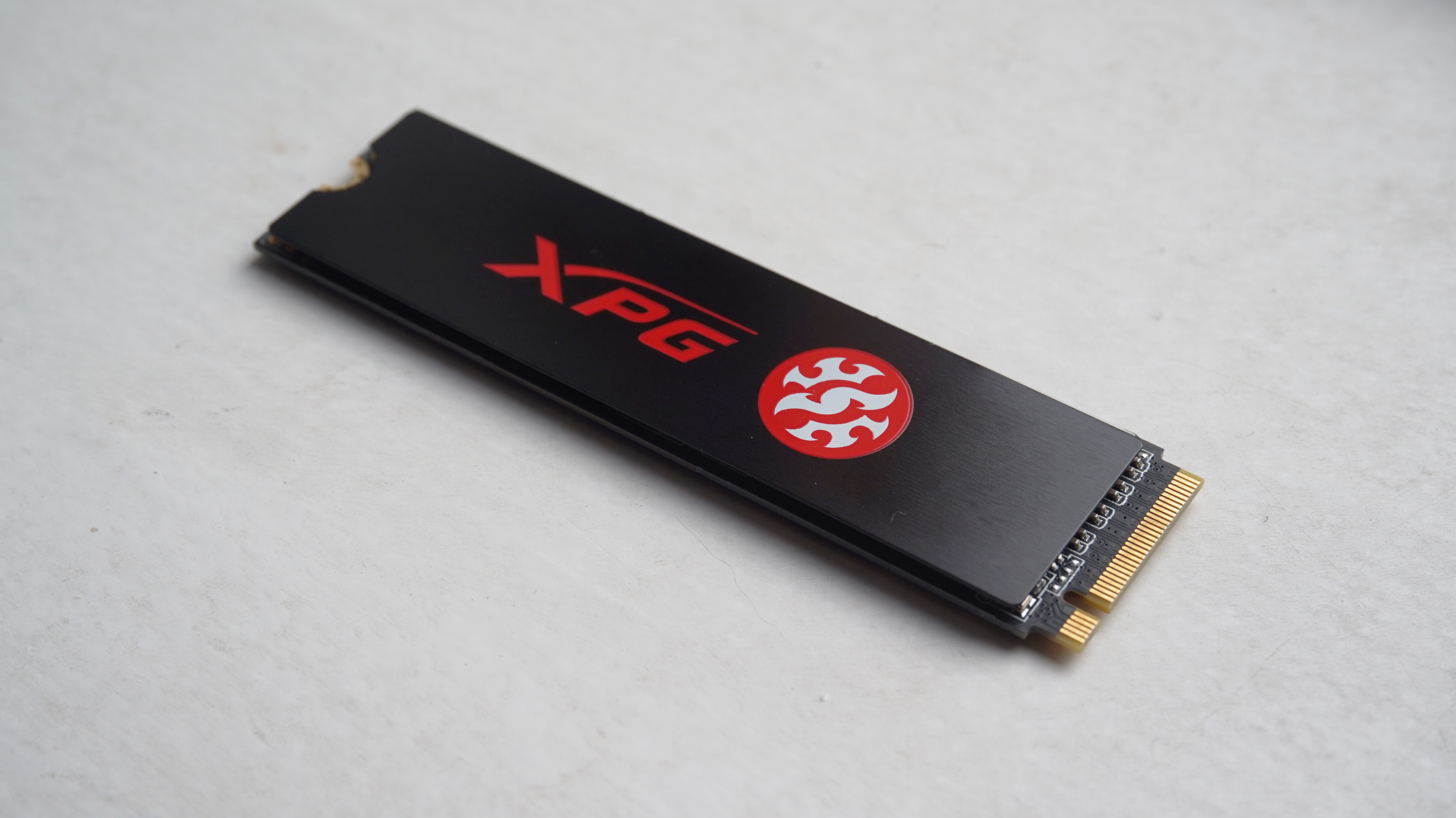 The bundled heatsink strip simply sticks onto the top of the SSD.

The SX8200 Pro’s sequential write time, however, is pretty much bang on for this particular size capacity, which actually has a lower claimed speed of 2300MB/s compared to its larger, faster siblings.

But as I’ve pointed out in nearly every SSD review I’ve written, sequential speeds are only half the story. Instead, it’s an SSD’s random read and write speeds I’m more concerned with, as these are the kinds of speeds you’re much more likely to see during everyday use. They aren’t nearly as sexy as the many thousands of MB/s quoted for its sequential speeds that get slapped on the box, but for me, they’re the most important thing in determining whether something’s actually worth your hard-earned cash or not – and fortunately for the XPG SX8200 Pro, it almost certainly is.

In AS SSD’s 1GB 4K random test, for example, the XPG SX8200 Pro finished with an impressive random read speed of 62MB/s. That’s 38% faster than the WD Black SN750 and 16% faster than the Samsung 970 Evo. In fact, it’s the fastest random read speed I’ve ever recorded for an NVMe SSD, which is outstanding considering how much cheaper it is than either of its main rivals. 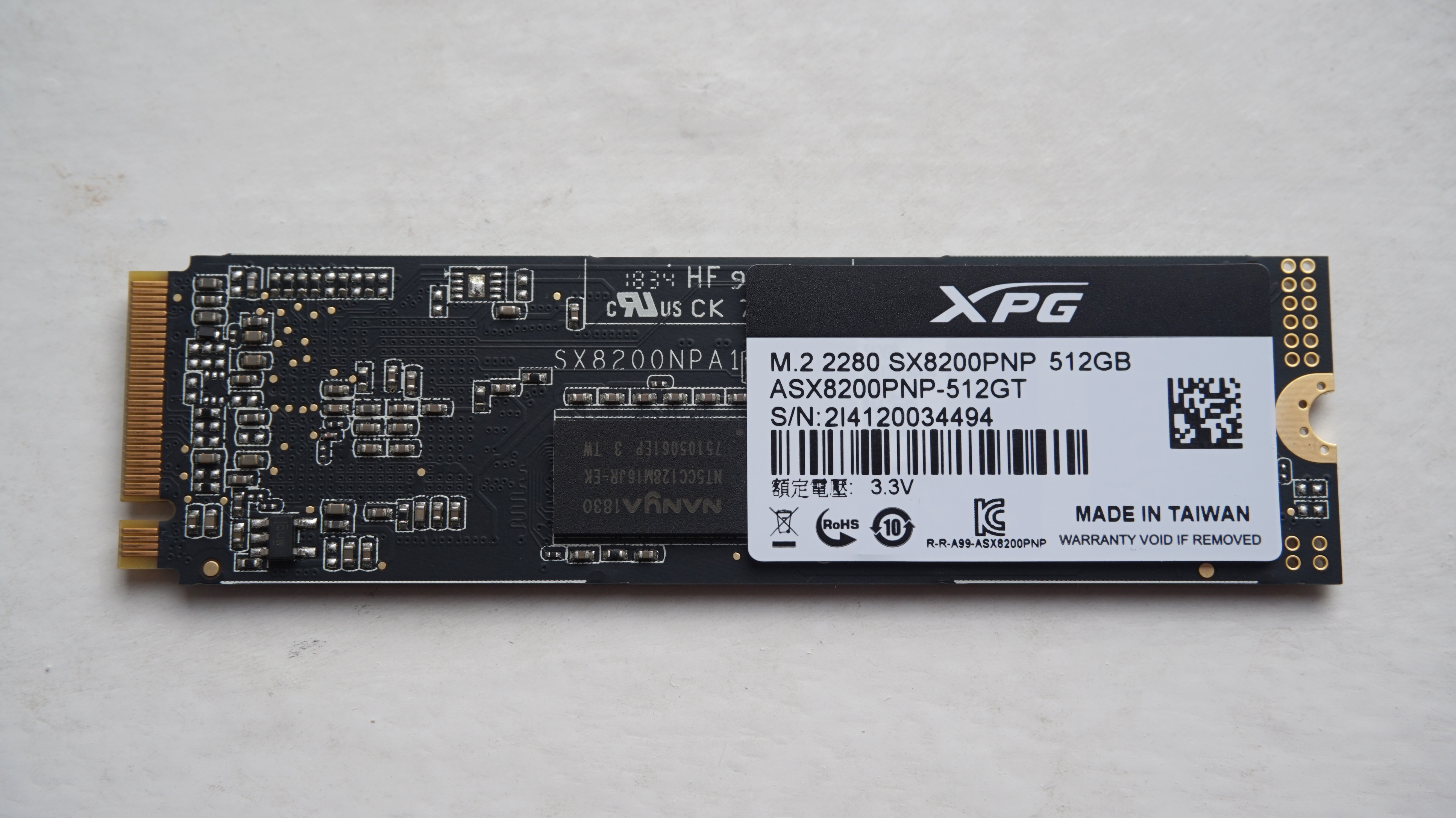 But – and there is almost always a ‘but’ in situations like this – the compromise comes on its random write speed. Not that a random write speed of 146MB/s is anything to sniff at, I should say, as this is still better than what I recorded for Samsung’s 970 Evo Plus. It is, however, very much on par with Adata’s cheaper XPG SX6000 Pro, and a small but not insignificant margin behind its main rivals – 12% in the case of the WD Black SN750, and 13% slower than Samsung’s regular 970 Evo.

The XPG SX8200 Pro also fell behind on both read and write speeds in CrystalDiskMark’s more intensive 1GB 8-thread-8-queue random test, where it came in with results of 1370MB/s read and 1430MB/s write. WD’s Black SN750, on the other hand, managed in the region of 1500MB/s on both counts, while the 970 Evo was even further ahead with a pair of 2000MB/s scores.

Admittedly, CrystalDiskMark’s test is much more befitting of the kind of workload you might see on a server or workstation, so it’s unlikely you’d want to scrimp and save on an SSD in this case and opt for something like the SX8200 Pro – especially when Adata don’t provide any endurance rating figures for this particular model (even if it does get the same five year warranty as everything else on the market).

With savings like this, the SX8200 Pro is an absolute steal at these capacities, especially given its superior random read speeds and only mildly slower random write speeds. If you’re looking for a great value NVMe SSD for either under £100 / $100 with the 512GB stick or under £200 / $200 with the 1TB model, the Adata XPG SX8200 Pro is a tough act to beat, earning it a spot in both price categories in my round up of the best SSDs.