Let’s get this out of the way now. The GTX 1660 Ti is a terrible, terrible name. It’s confusingly similar to Nvidia’s existing GTX 1060, implying it’s some sort of weird, halfway house between that and the GTX 1070, when in fact it’s actually part of Nvidia’s new Turing family, which is the same GPU inside their new RTX 20-series cards, making it, in effect, much more closely related to the RTX 2060 than anything else. It’s a mess, really, and isn’t helped by Nvidia’s somewhat weak justification for starting a new 16-series is because 16 is closer to 20 than 10 (seriously).

But! Naming conventions aside, the GTX 1660 Ti is actually a pretty swish graphics card – and potentially even a best graphics card contender for those after top notch quality at 1920×1080. Priced from £260 / $279, that’s £70 / $70 less than the cheapest RTX 2060, and much more in line with what the GTX 1060 originally cost all those years ago before graphics card prices went a bit loopy. And yet this little tiddler (or not so tiddly in the case of Asus’ ROG Strix OC edition on the left up top there) isn’t just more powerful than the GTX 1060. It’s also even nippier than the GTX 1070, and in a lot of cases even brushing up against the RTX 2060. Which ain’t bad for a card under £300 / $300.

Of course, a lot of you might be wondering, why not just call this thing the RTX 2050 and have done with it? There’s good reason for this, and that’s because the GTX 1660 Ti’s Turing GPU doesn’t actually have any of the RTX stuff that makes the RTX cards RTX. Stuff like RT Cores for real-time ray tracing, or Tensor Cores for Nvidia’s performance boosting DLSS tech. None of that’s here for the GTX 1660 Ti, hence why it’s been dubbed a GTX card instead of an RTX one. 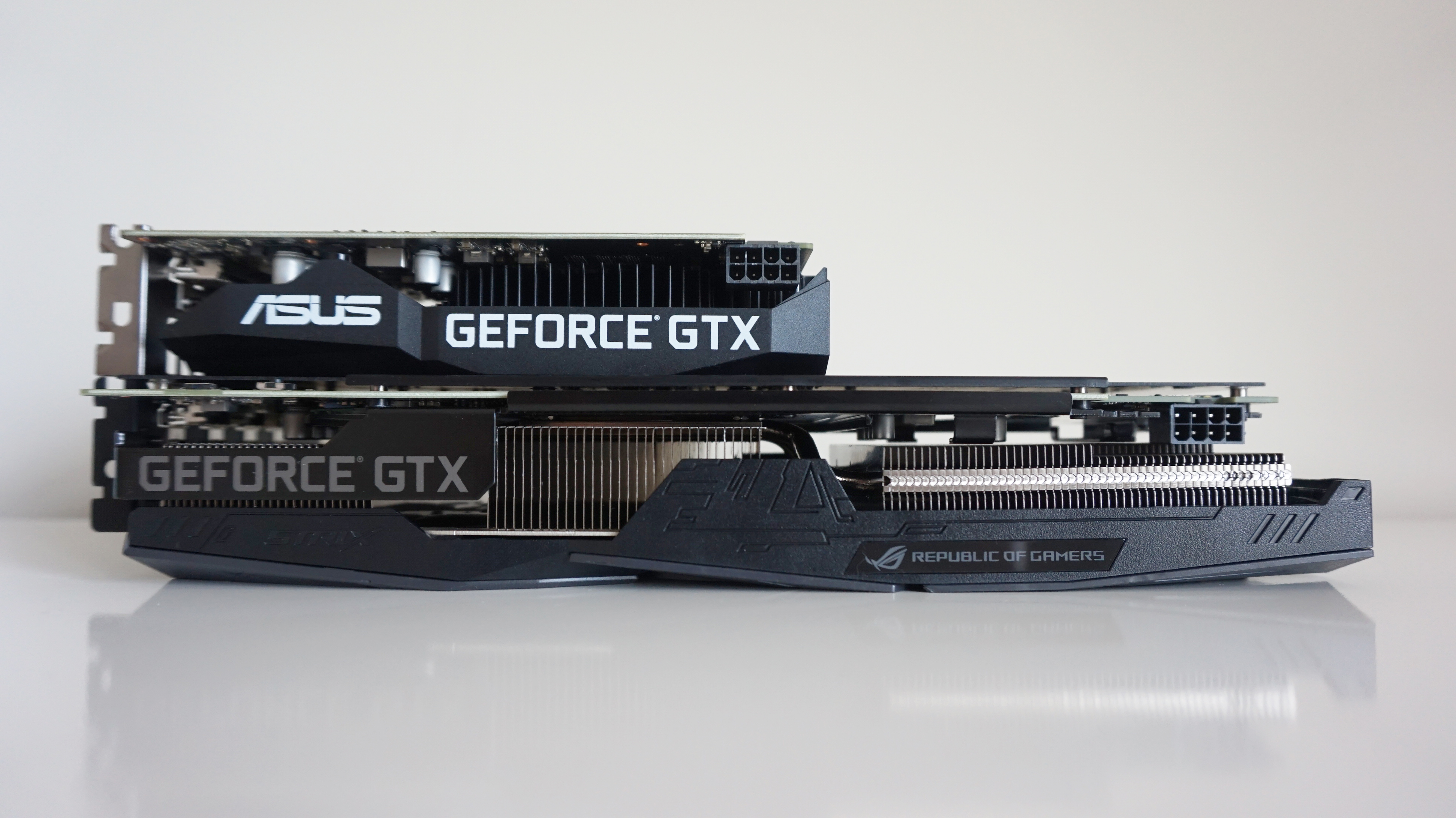 The GTX 1660 Ti will come in all sorts of shapes and sizes, making it a great fit for mini ITX cases as well as regular ATX PCs.

What it does have, however, is Turing’s fancy pants shaders, allowing for other performance enhancing techniques such as variable rate shading, motion adaptive shading and content adaptive shading. Similar to DLSS, these use Turing’s AI smarts to take some of the load off the GPU by identifying which bits of a scene don’t need as much rendering (or colouring in, so to speak) as other bits, allowing the GPU to focus on what does need filling in, such as detail-heavy control panels for example, instead of putting lots of wasted effort into rendering simpler objects such as blank walls.

You can read more about how it all works in my RTX guide, but from my own experience of it in Wolfenstein II, there’s barely any loss in overall visual quality, and you get a frame rate boost of around 15-20fps in the process. Not that Wolfenstein II is particularly hard to run in the first place, mind, but still, if it’s indicative of the kind of boost you’ll see in other games, it certainly sounds promising indeed. The problem is that, like most of the new features ushered in on Nvidia’s RTX cards, it needs specific developer implementation and isn’t just available by default, leaving us with very little to actually test. In fact, right now Wolfenstein II is the only game that supports it right now, but Nvidia have assured me that more will follow. At some point.

Still, I’d argue this isn’t such a big deal for the GTX 1660 Ti, as the card’s excellent raw performance and comparatively low price are what really make it such an attractive proposition over Nvidia’s current 10-series. 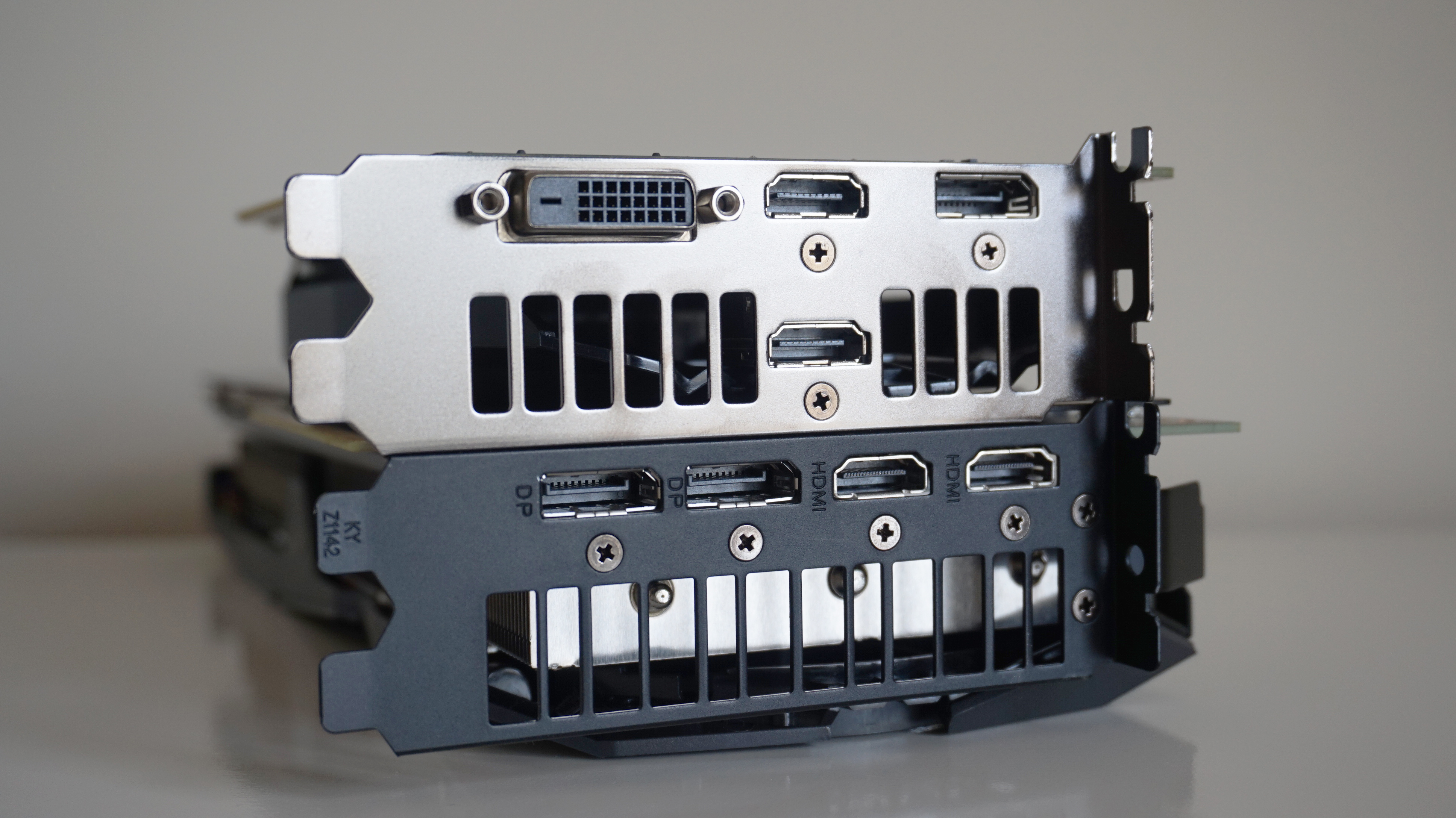 Not all GTX 1660 Ti cards will have the same configuration of display outputs. The Asus Phoenix (top) comes with a DVI output, for example, while their ROG Strix OC edition (below) swaps it for a second DisplayPort.

However, as some of today’s more demanding blockbuster games have shown (*cough*Metro Exodus and Assassin’s Creed Odyssey*cough*), both of these cards are starting to lose their edge as flawless 60fps 1080p graphics cards. AMD have already introduced their £235 / $260 Radeon RX 590 to try and rectify that performance gap, but Nvidia’s GTX 1660 Ti tops the lot of them, offering pretty much 60fps minimum on the very best settings at 1080p (save Metro Exodus) and a decent 60fps on High settings at 1440p.

Now, there’s no Nvidia Founders Edition of the GTX 1660 Ti this time round, so I’ve been sent £330 (US pricing TBC) Asus’ ROG Strix OC edition as well as their entry-level £260 / $279 Phoenix card to review. I haven’t had quite as much time with the latter, but my tests show that it’s really only an average of 2-5fps slower than the ROG Strix OC, so I’m pretty confident you can take the ROG Strix OC results I’ll be outlining below and apply them relatively safely to what you’ll get on the cheaper £260 cards as well.

After all, both cards come with the same 6GB of GDDR6 memory and 1536 CUDA cores, and they each share the same base clock speed of 1500MHz. The only real difference in terms of their overall specs is their boost clock speed, which goes as high as 1890MHz on the ROG Strix OC when its OC mode is engaged (although I left it on its default Gaming mode for testing, which caps it at 1860MHz), and 1815MHz on the Phoenix (again, when you’re using its OC mode – otherwise you’re looking at a maximum of 1785MHz). 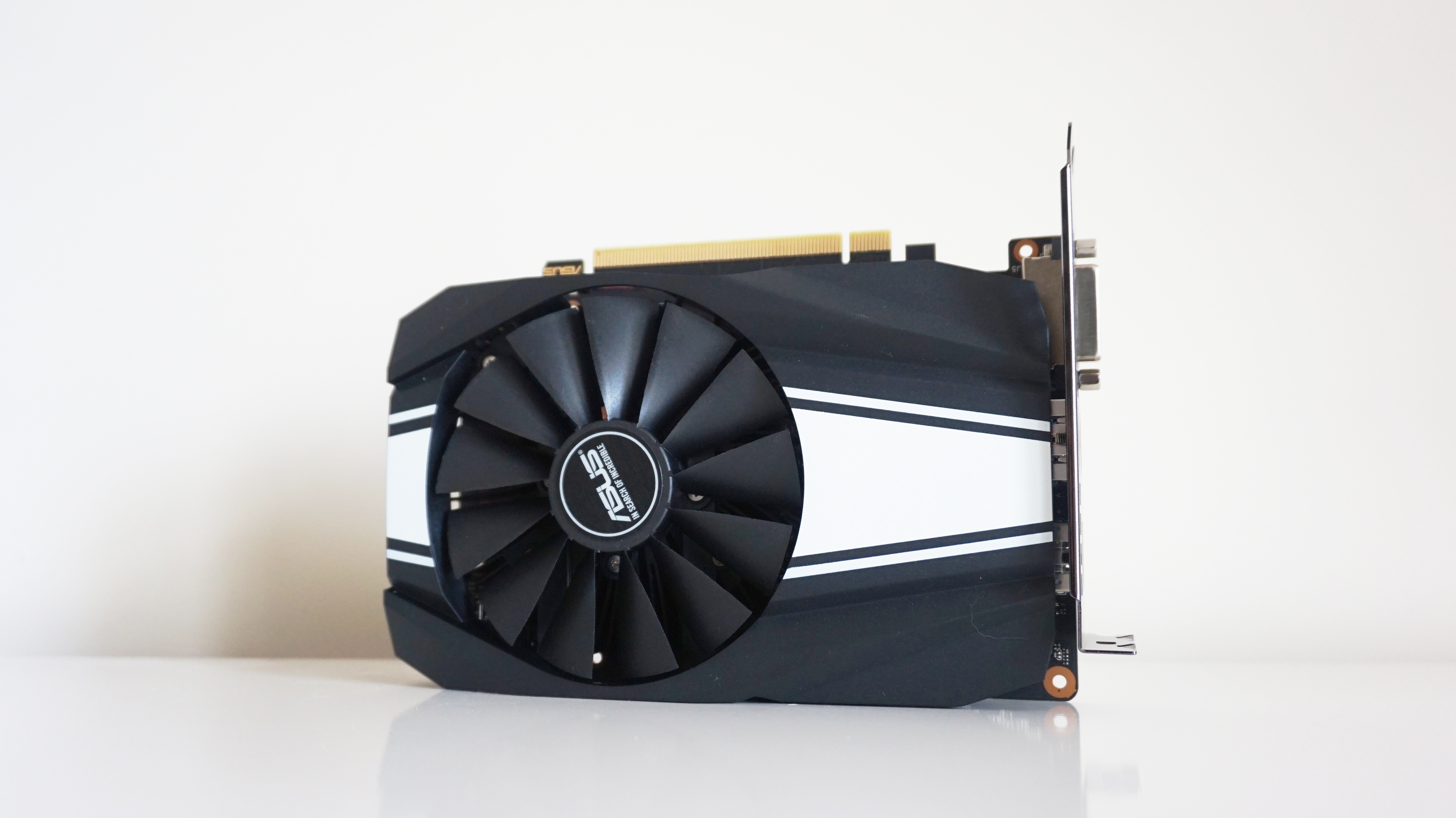 Asus will have four GTX 1660 Ti models in total, with the Phoenix (above) sitting at the cheapest end of the spectrum.

So let’s talk numbers. In Shadow of the Tomb Raider, for example, the GTX 1660 Ti was able to deliver at least 59fps on its Highest graphics settings in both its tough Cozumel cave and Cozumel town square scenes at 1920×1080, rising to 80fps in the former and 67fps in the latter – and that’s with its top SMAA x4 anti-aliasing setting enabled to boot. That’s practically double the speed of the GTX 1060, whose range of 28-42fps on those settings was only just about playable when I tested it in the same PC. It’s also noticeably faster than both the RX 590 (37-61fps) and GTX 1070 (40-60fps), and only a teensy bit behind the RTX 2060, which came in at 65-82fps.

High was also where it was most comfortable running Monster Hunter: World at 1440p, too, averaging a very agreeable 58fps when out in the wilds of dino territory, and offering nigh-on identical speeds to my 1080 Highest results as well. To put that in context, the GTX 1060 can barely scrape 40fps on either of those settings, while the RX 590 is still lagging behind in the low 50s at 1080p and high 40s at 1440p. Even the GTX 1070 can only manage an average of around 56fps on these settings, which makes the GTX 1660 Ti’s results even more attractive. 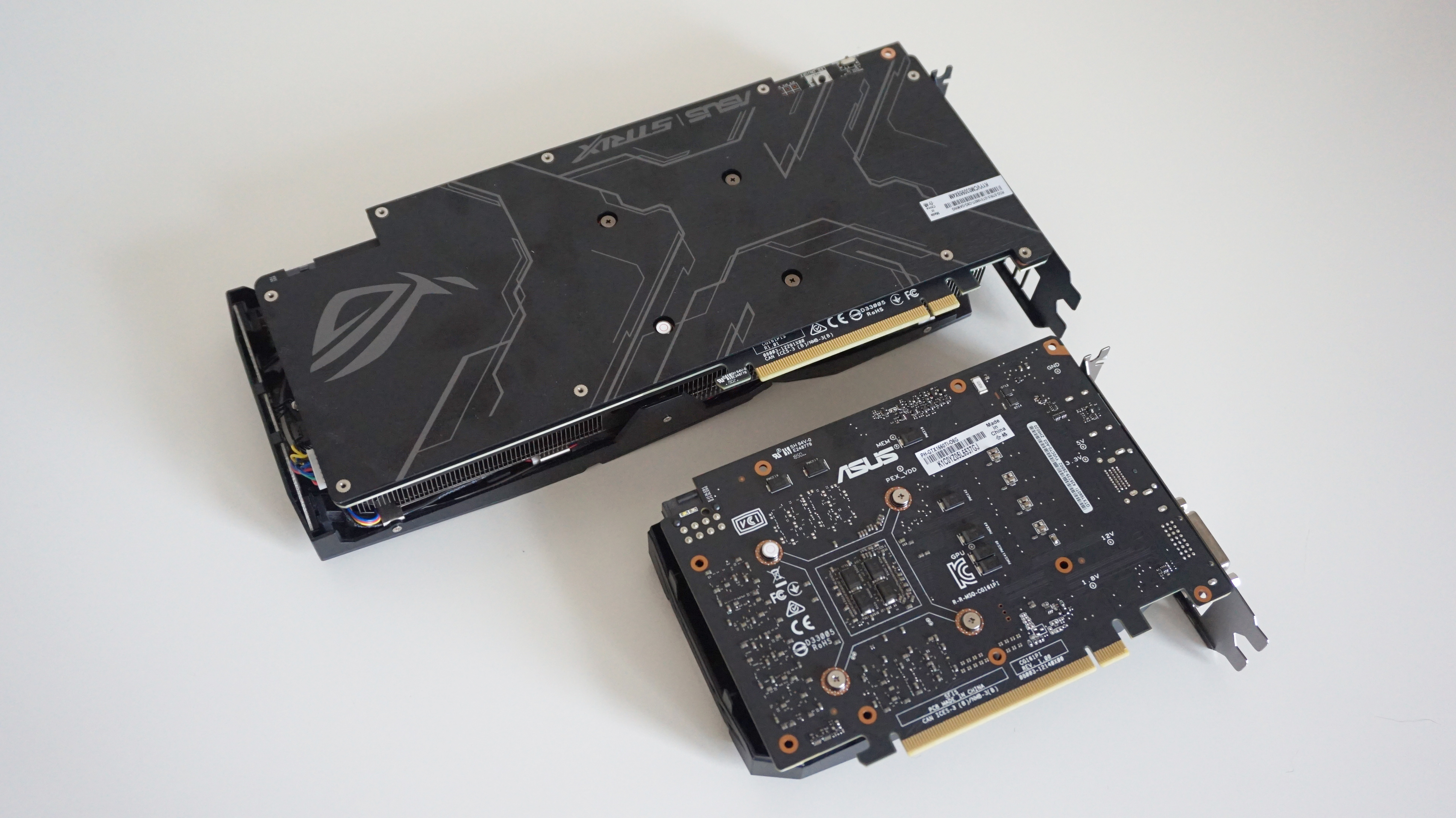 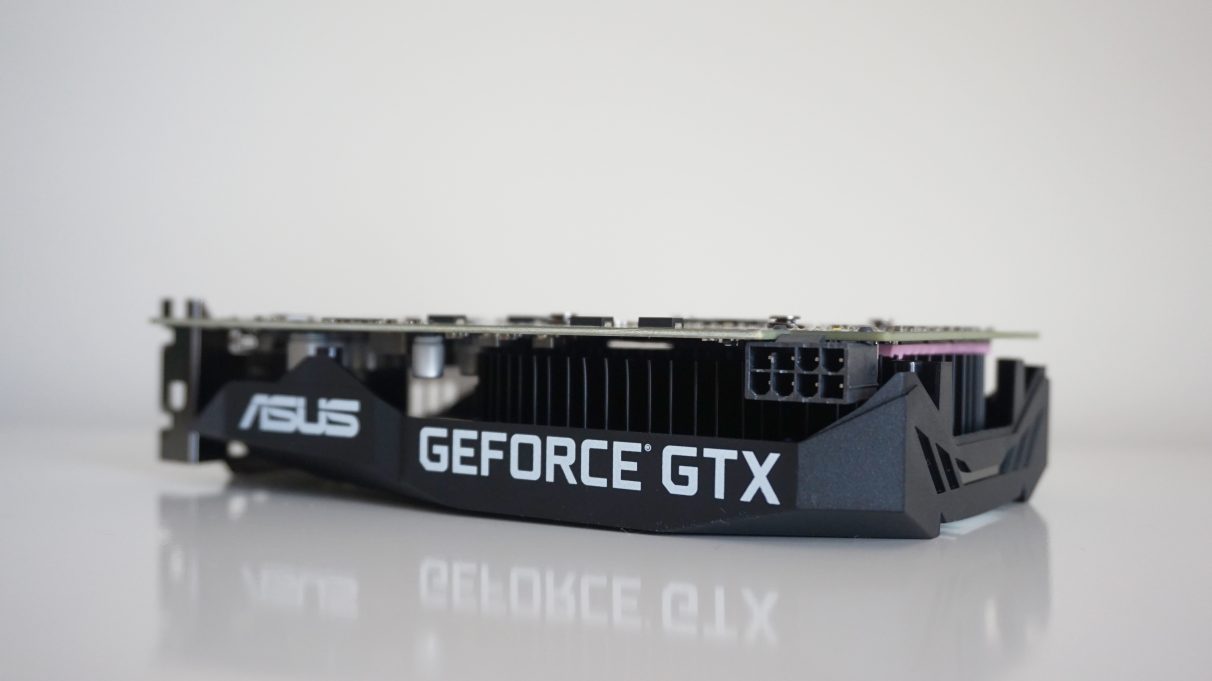 Regardless of model, all GTX 1660 Ti cards require an 8-pin power connector. 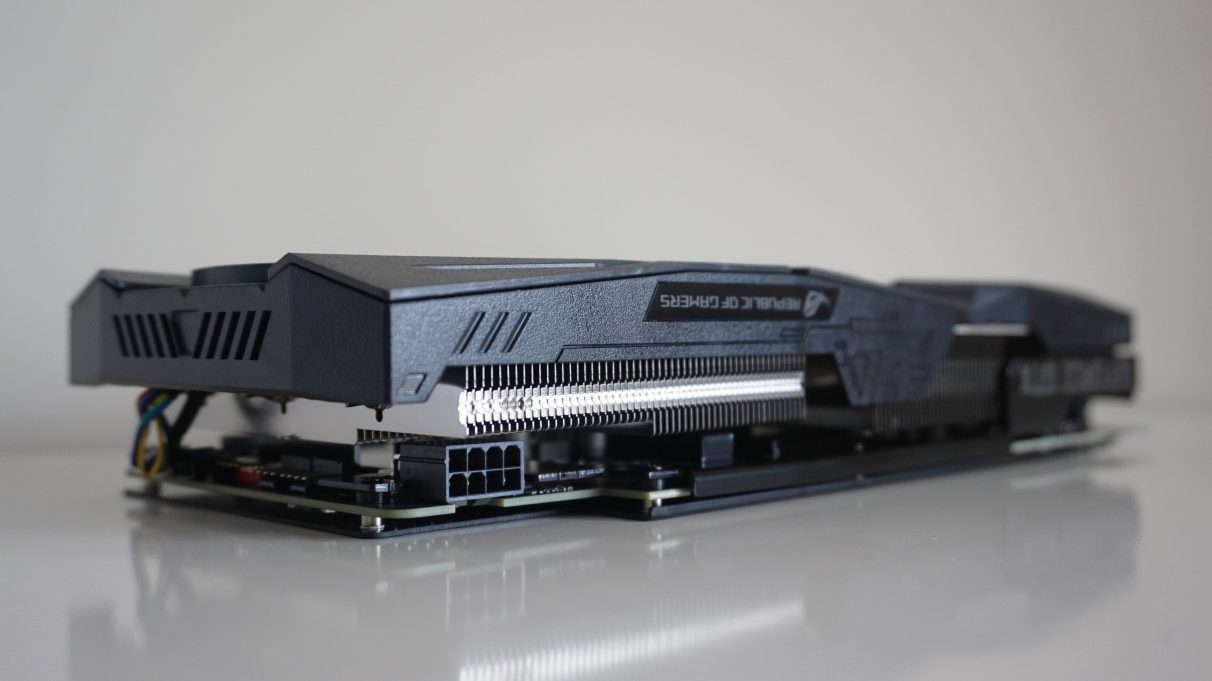 There will still be some games that challenge the GTX 1660 Ti, of course, such as Final Fantasy XV and Metro Exodus. In the former, you’re looking at Average settings at 1080p if you want near-60fps speeds with all of Nvidia’s fancy effects switched on, but Highest with all of that switched off will still net you a smooth 60-72fps, which is roughly the same as what I managed on the RTX 2060. The RTX 2060 still has the edge when you move up to 1440p, but the GTX 1660 Ti will still bag you a very playable 46-52fps on High sans Nvidia effects, or 56-62fps on Average, both of which are a good 10-15fps higher than what you’ll get on the GTX 1060 and RX 590.

As for Metro Exodus, I saw an average of 54fps on High settings at 1080p in its benchmarking tool, and an admirable 53fps average on Medium at 1440p, putting the GTX 1660 Ti around 10fps in front of its cheaper competition, and bang on par with the GTX 1070. The RTX 2060 will still get you another 10fps on top of that, mind, but for a GPU under £300 / $300, those are still some pretty impressive results regardless.

Indeed, with so many of my test results clutching at the RTX 2060’s coat-tails, it almost makes you wonder whether it’s really worth spending the extra £70 / $70 for all that ray tracing and DLSS support. I’d argue ‘yes’ if you definitely want the fastest speeds on the absolute best settings at 1440p, or have a 1920×1080 monitor with a high refresh rate. If you’ve only got a 60Hz, 1920×1080 monitor and are perfectly happy with playing games at 60fps on High settings at 1440p, however, then I reckon the GTX 1660 Ti will do you just fine – especially if you’re of a mind to wait until ray tracing and DLSS become more widespread before making the jump to a full-blown RTX card. 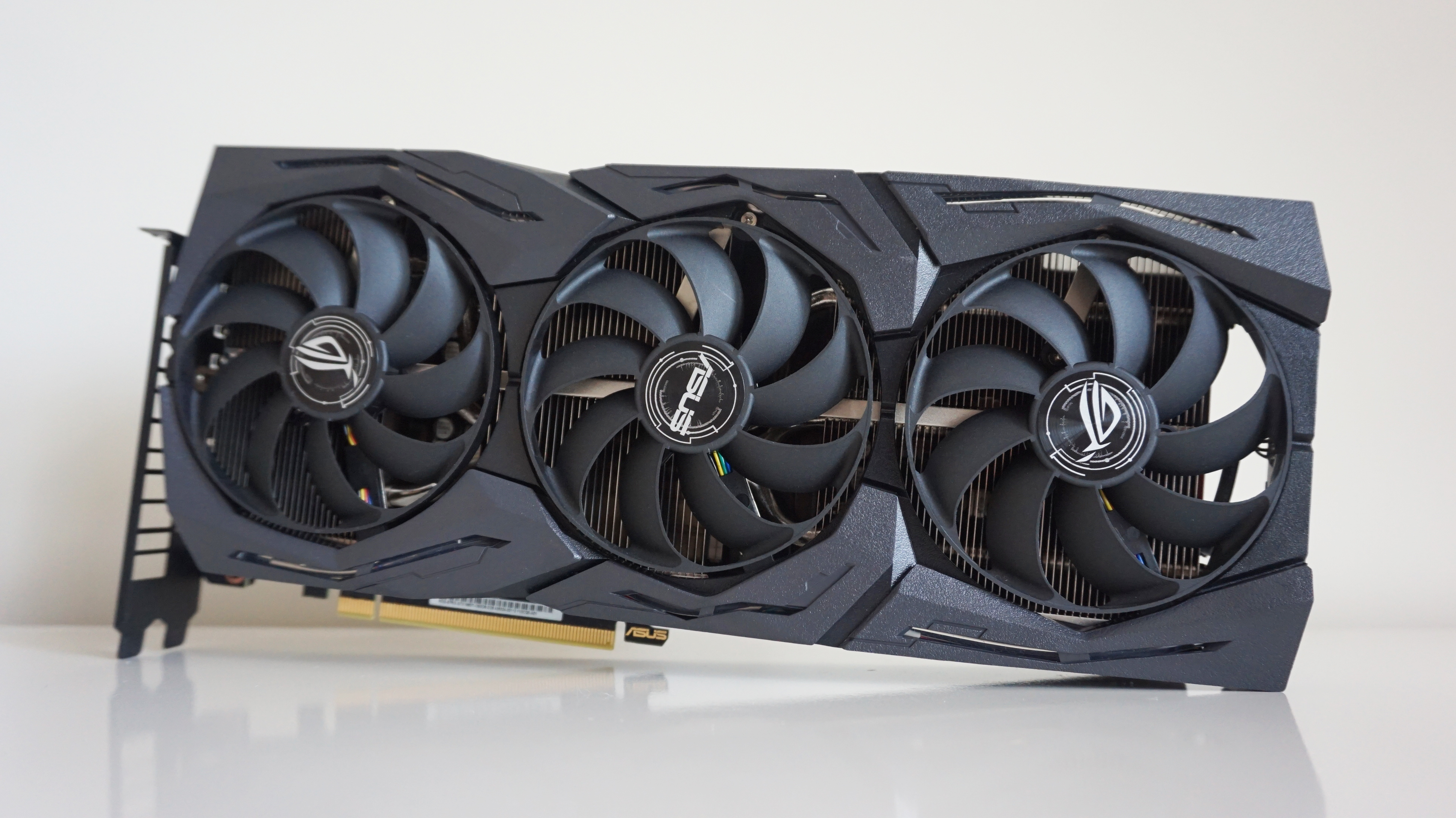 For those in the UK, however, I reckon the £200 6GB GTX 1060 and £235 8GB RX 590 are still both cheap enough at time of writing (especially once you throw AMD’s current three free games bundle into the mix) to make them tempting budget cards for those who aren’t so fussy about playing games at 60fps on max settings. And then there’s that mad AMD Radeon RX Vega 56 deal for £250 announced yesterday which just blows everything out of the water – both from a performance point of view and the fact you get three free games with it, too. The Vega 56 deal may not last, of course, but the point still stands that there’s a lot more to consider here than our friends in the US.

Still, one thing is clear. No one should be buying a GTX 1070, regardless of where you live. With the GTX 1660 Ti offering pretty much identical speeds for a lot less money, and the RTX 2060 surpassing it even further for roughly the same kind of money, that card is now dead and buried.

Instead, the GTX 1660 Ti is now my new 1080p graphics card of choice for those who want the absolute bestest best speeds, as well as my new budget recommendation for anyone looking for a decent 1440p card and doesn’t want to spend more than £300 / $300 on it. The RX 590 is probably still better value overall in the UK, but elsewhere the GTX 1660 Ti makes a very compelling case indeed. If you’re currently in the throes of upgrading your graphics card, the GTX 1660 Ti comes highly recommended.