There is simply no mistaking a Mad Catz gaming mouse. Just like their wacky console box controllers that were once the sole purview of younger brothers and sisters the world over before they went bankrupt in March 2017, you only need to take one look at their newly resurrected RAT series, such as the Pro S3 here, to realise that, yep, this is definitely a Mad Catz gaming mouse.

With its many plastic wings and angular RGB lighting, Mad Catz’s new top-end clicker looks more like some kind of cyberpunk scarab beetle than a toothy, razor-clawed rodent if you ask me, but if we put aside its enduring crimes against design for a moment, you’ll find a surprisingly flexible mouse with a pretty decent feature set, including an adjustable palm rest, eight programmable buttons and a 7200 DPI Pixart PMW3330 sensor. But is the Pro S3 a true gaming rat king or is it nothing more than a puny little dormouse? Let’s find out.

Want to see how the Mad Catz RAT Pro S3 compares to other top gaming mice? Then check out our current best gaming mouse champions.

It’s certainly more dormouse than rat when it comes to overall size, as even my tiny hands found its default dimensions to be a bit on the small side. It’s far too titchy to sustain an arched claw grip for any length of time, I reckon, and adopting a more laidback fingertip grip or all-encompassing palm grip often felt like I was smothering the Pro S3 rather than resting on it comfortably. 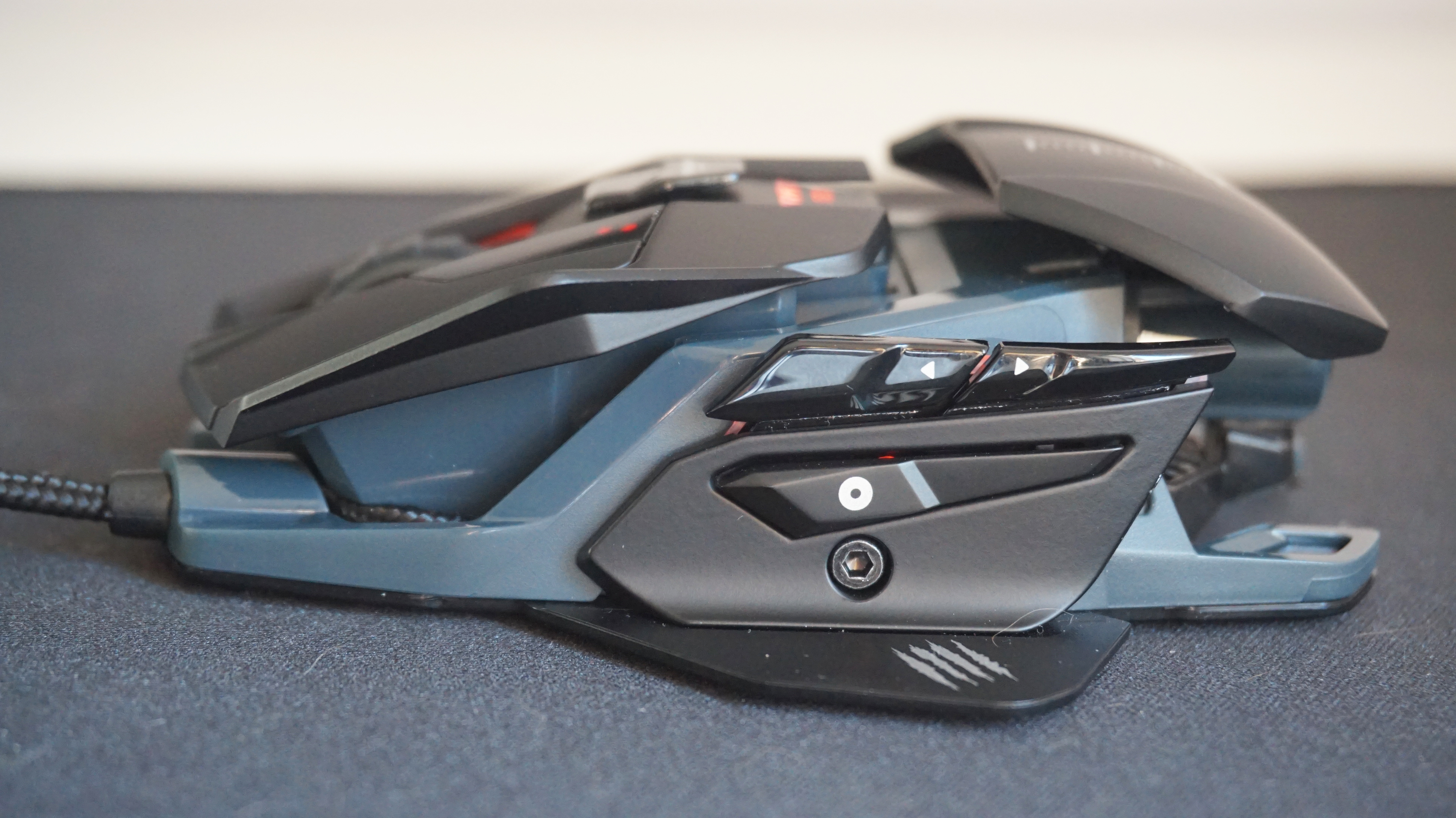 As a result, I’d imagine that larger handed individuals will almost certainly need to make use of the Pro S3’s adjustable palm rest in order to find a comfortable resting place. This can be pushed back into three further positions up to 12mm away from the main chassis, but you can also tilt it plus or minus 15 degrees side to side to give it an even steeper angle depending on the shape and size of your hand.

You have to remove the palm rest entirely in order to make use of its tilt feature – trying to do it in situ will almost certainly result in some snapped and broken plastic, judging from my own hesitant experiments – but in theory it does offer a welcome amount of flexibility that even height-adjustable gaming mice like the HP Omen Reactor struggle to match.

I say ‘in theory’ because part of me also wonders whether the tilt function is actually just a way of masking the Pro S3’s inherently bad design. For example, if you extend the palm rest without any tilt involved, the pointy bit on the left quickly starts digging into that fleshy bit between your thumb and forefinger. Tilt it to the right, however, and that pointy bit is now much closer to the ground, making it less of an irritant against your palm. Admittedly, the lower left corner then took over as being the main source of discomfort for me in its newly tilted position, but it rather makes you wonder why they just didn’t sculpt a more comfortable palm rest in the first place – especially when moving it in and out feels like such a fragile exercise in the first place. 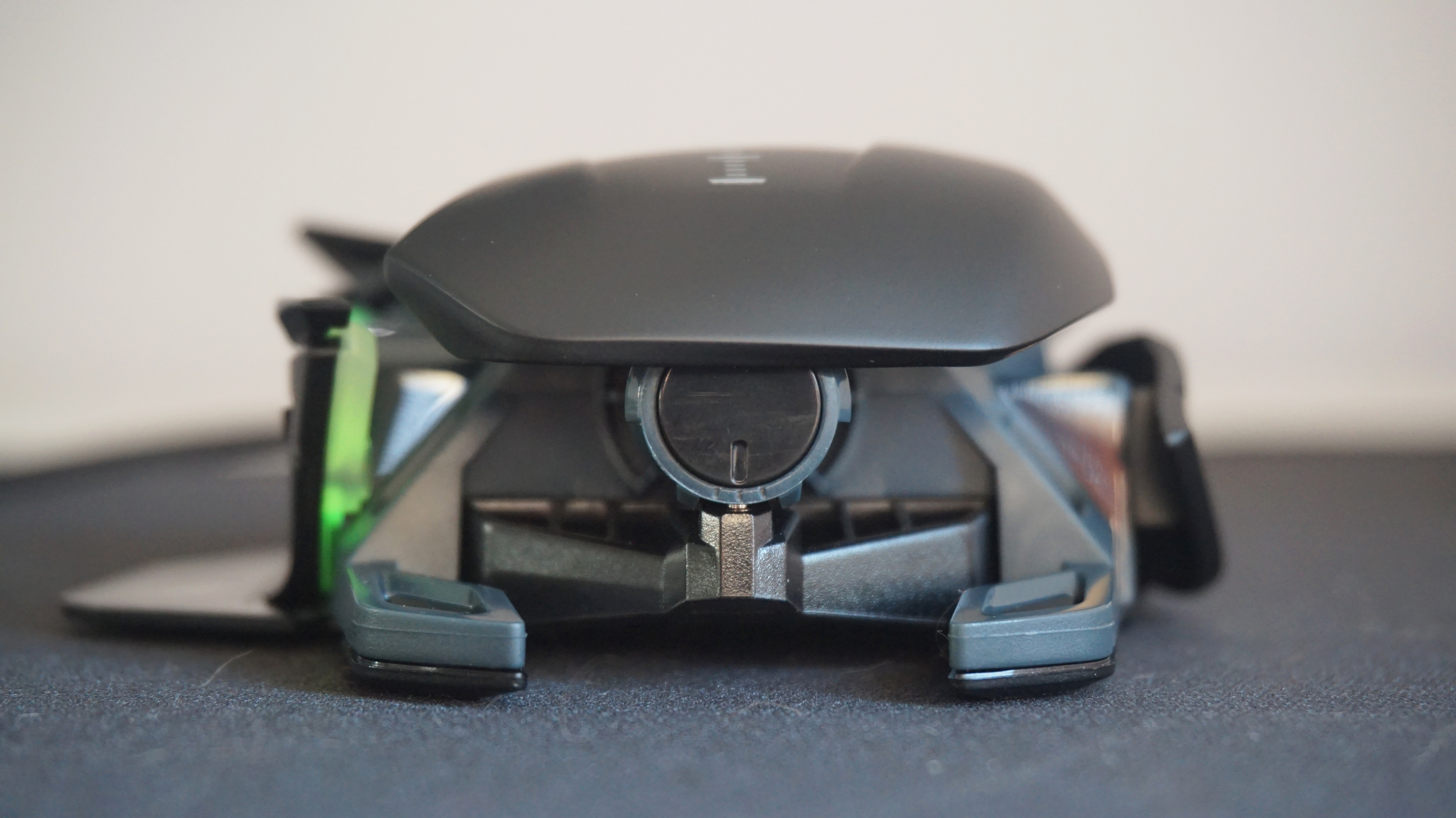 See those extra little notches on the circle bit? That’s where you can re-insert the palm rest in order to tilt it a bit and potentially make it more comfortable.

Indeed, with so many bits and pieces on this mouse, from its raised main clicker buttons to its flared side panels, the whole thing doesn’t really feel particularly sturdy in the hand. It doesn’t help the Pro S3 weighs just 80g, either, which is pretty light as gaming mice go (and isn’t enough to prevent it from tipping upwards if you put too much weight on its extended palm rest, I might add), and I was constantly worried about breaking it or sending something flying if I was too heavy-handed with it.

I’d also argue that saying it has eight programmable buttons is a little bit of a stretch, too, as you’ll find three of them are actually located on the scroll wheel. Now, I appreciate it’s pretty normal to have at least one function assigned to the scroll wheel, especially if you can press it down like a normal button, but I’m just not sure how practical it is to assign separate keyboard and desktop shortcuts or your own macro commands to the scrolling up and down actions.

Certainly not for regular desktop duties, that’s for sure, as that puts the entire scrolling aspect of it out of action, and while there’s arguably potential for playing games, I’d rather not have the faff of switching mouse profile (of which there are four to choose from via a tiny button on the belly of the mouse) and remembering what each one does every time I want to play something. Want to change the Pro S3’s profile? You’ve got to hit that tiny, tiny button next to the sensor.

Still, I appreciate Mad Catz’s so-called Precision Aim button on the left hand side (the long one with the white circle on it), which slows your DPI right down to a speed of your choosing on the fly for greater control over those sniper scope headshots, for example – although you can technically assign it to any button you like if that’s too hard to reach. There’s also a central DPI button that gives you four different speeds to choose from, ranging from a dead-slow 50 DPI all the way up to 7200 DPI (although again, this can be re-assigned to any button you prefer), plus two more side buttons that offer forward and back web surfing functions by default but can also be changed to whatever takes your fancy through Mad Catz’s software.

Overall, though, there are much simpler, more comfortable, and not to mention better-looking gaming mice available for the same kind of money ($65 in the US, with UK prices TBC) that get you more or less exactly the same feature set as the RAT Pro S3. The Logitech G502 Hero, for instance, has come down in price since I first reviewed it to £64 / $68, or an even cheaper £56 / $55 if you opt for the slightly older but identically designed G502 Proteus Spectrum model. Both versions get you the same kind of on-the-fly DPI control, additional weights to make the mouse heavier, seven proper programmable buttons (or 11 in total if you count the scroll wheel and main clickers) and a generally much more sturdy and eye-catching design than Mad Catz’s RAT.

If you’re in the US, there’s also the even more flexible Razer Naga Trinity to take into account as well, which offers a much wider range of controls and customisation options for just a fraction more at $75. Thanks to its interchangeable side panels, it’s essentially three mice in one, which is excellent value given the price, and the number one reason why it’s still our best gaming mouse recommendation for those looking to spend between $60-100.