Well, that didn’t take long, did it? Just three weeks ago, Nvidia’s GeForce GTX 1660 Ti came crashing into our best graphics card list as our new champion for flawless 1080p gaming, and today sees the release of its non-Ti sibling, the regular GTX 1660. Priced at an even more palatable £200 / $220, Nvidia say this graphics card is primed and ready to replace their 3GB GTX 1060. Thankfully, my results are more optimistic than that, as I’d say this is the card you should buy instead of the 6GB GTX 1060. Is this the new best budget graphics card we’ve been waiting for? Let’s find out.

Now, in case you’re looking at the GTX 1660’s name and thinking, ‘Hold on a sec, what the heck is that all about?’, here’s a brief reminder about what Nvidia’s new GTX 16-series actually is and how it differs to their RTX 20-series. As I explained in my GTX 1660 Ti review, the GTX 16-series use the same Turing-based GPU architecture as their more upmarket RTX cousins, but they don’t have any of the RTX stuff that makes them RTX cards – so no ray tracing and no performance-boosting DLSS magic. Hence why they’re GTX cards rather than RTX cards.

As for why Nvidia have gone with the number 16 instead of just, say, calling them GTX 20 cards… well, the less said about 16 being closer to 20 than 10, the better, really, because yep, that really is Nvidia’s logic for choosing that particular number.

The one big Turing feature the GTX 16-series does have is its swish shader tech, which enables other performance-boosting techniques such as content adaptive shading, variable rate shading and motion adaptive shading, and you can read more on what those all do in my RTX guide. The bad news is that, much like ray tracing and DLSS, they all need to be supported by the developers themselves before you start seeing any benefits – and right now, the only game that actually supports any of them is Wolfenstein II: The New Colossus. 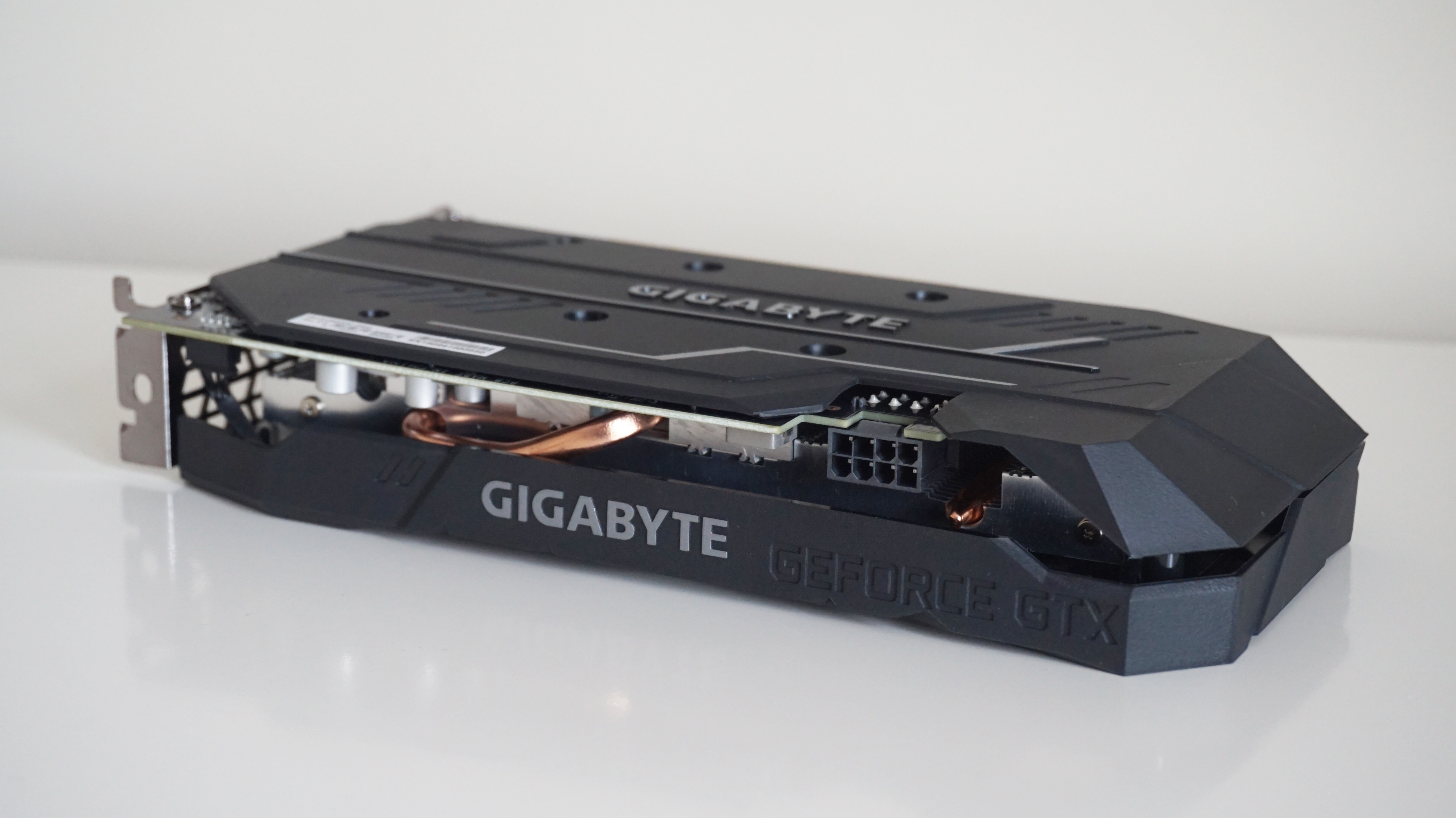 That’s not a great selling point, all told, but as I said with the GTX 1660 Ti, I really don’t think it matters that much here, as the GTX 1660’s raw performance is still better than what you’d get by spending the same amount of money, if not more in some cases, on a 6GB GTX 1060.

In Shadow of the Tomb Raider, for example, the Gigabyte GeForce GTX 1660 model I was sent for review was capable of hitting an average of 52fps when I was moseying around its busy day of the dead festival in Cozumel’s town square on Ultra settings at 1920×1080 with its demanding SMAA x4 anti-aliasing switched on, which is a massive improvement on my Asus GeForce GTX 1060 OC’s average of just 38fps under the same conditions.

The same goes for Forza Horizon 4, where the GTX 1660 raced ahead with an average of 86fps on Ultra at 1080p compared to the GTX 1060’s 72fps average. Of course, this will only be of use to you if you also have a high refresh rate monitor capable of showing all those extra frames, but if you do own such a monitor and are into your fast-paced competitive games that can often do well above 60fps, then you’ll definitely be much better served by the GTX 1660. Case in point: whereas the GTX 1060 tended to max out around 125fps in Doom on Ultra at 1080p, the GTX 1660 saw highs of 150fps. 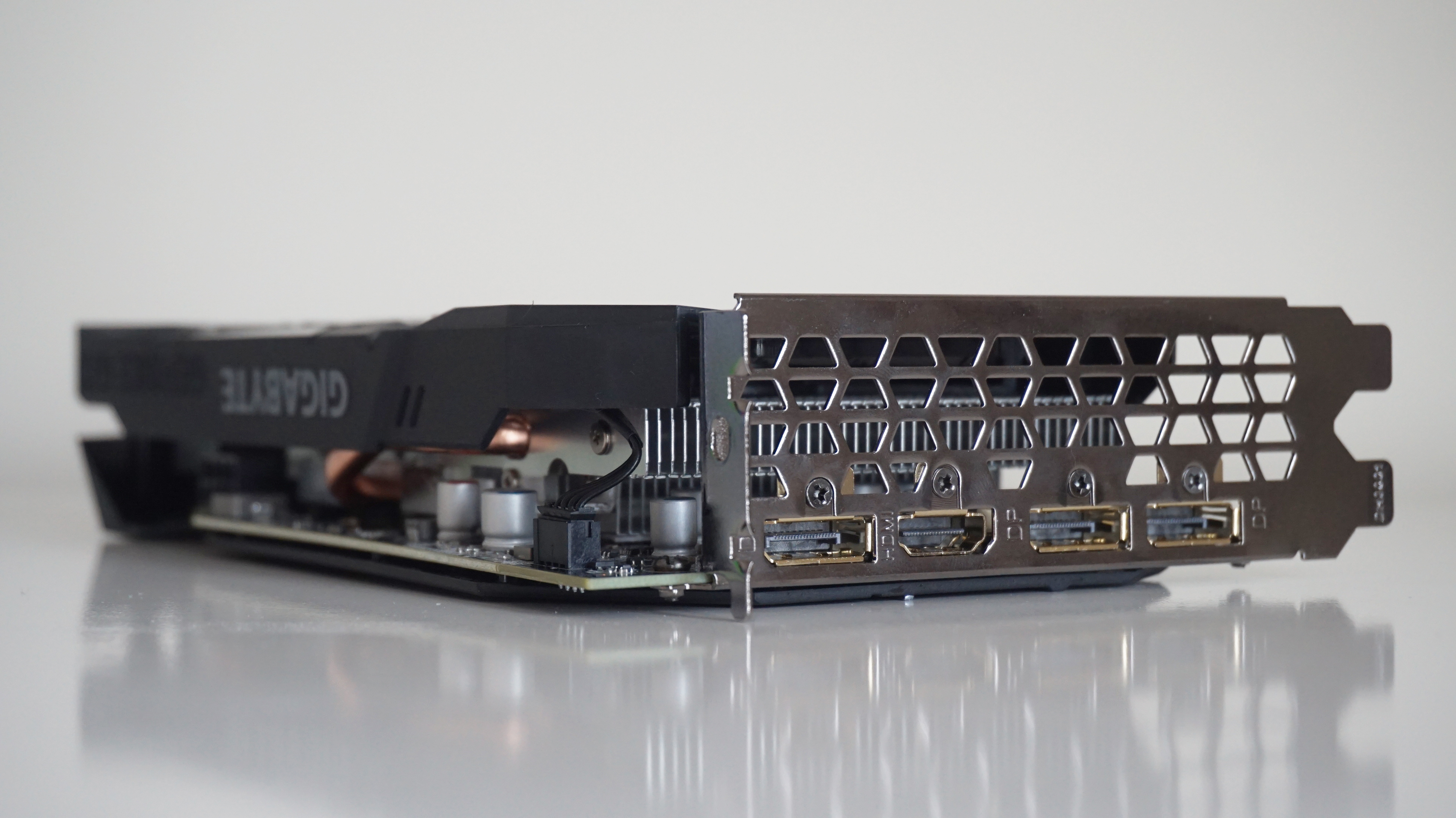 Ports will vary by manufacturer, but this Gigabyte model comes with three DisplayPorts and one HDMI output.

This kind of performance jump won’t be the case in every game going, however, as the other half of my testing suite put both cards on pretty much equal footing. The GTX 1660 still came out as the faster card every time, but the improvements offered were arguably so small that you probably wouldn’t notice them without the aid of a frame rate counter.

In Assassin’s Creed Odyssey, for example, there was an average of just four frames separating the GTX 1660 and GTX 1060 on Ultra High on 1080p, with the former managing 48fps in its internal benchmark over the latter’s average of 44fps. The same gap emerged in Final Fantasy XV, too. The GTX 1660 averaged 56fps when Noctis and his boy band lads were running up and down the lush hillsides of Duscae with all of Nvidia’s fancy effects turned off, which to my eyes is pretty much the same as the GTX 1060’s average of 52fps.

Getting up close and personal with the end of a Lizardman’s spear in Total War: Warhammer II was almost equally fluid as well, with the GTX 1660’s average of 52fps just edging out the GTX 1060’s 48fps. In fact, the only place where this kind of teensy step up in performance made any kind of palpable difference was in Metro Exodus, where its average of 39fps on Ultra settings at 1080p (see my Metro Exodus graphics performance guide for more info on what that actually means) looked noticeably smoother in the game’s benchmark tool than the GTX 1060’s average of 34fps.

Still, regardless of how small the performance boost actually is in practice, the fact remains that, at 1080p, the GTX 1660 is still the faster card overall. I’d be tempted to err on the side of the GTX 1060 if the GTX 1660 was more expensive, but when both cards cost the same amount of money, it just doesn’t make any sense to opt for the 6GB GTX 1060 any more. 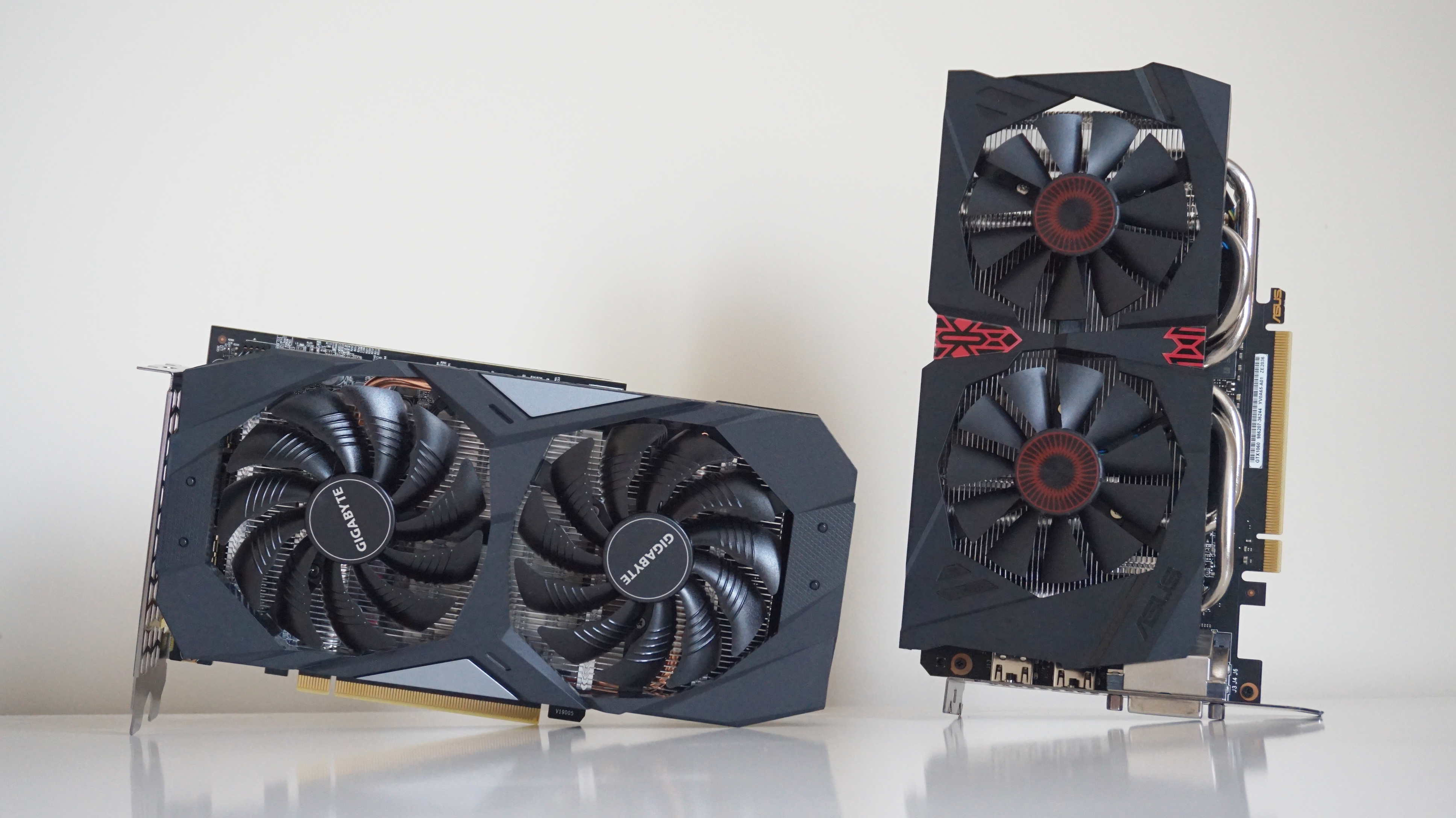 If you’re buying a new graphics card today, you should almost definitely get the GTX 1660 (left) over the 6GB GTX 1060 (right).

When I bumped the resolution up to 2560×1440, however, something quite strange happened. Like the GTX 1060 before it, this is ultimately a card that’s most comfortable around Medium to High quality settings when it comes to hitting 60fps at this resolution, so you’re still going to need to spend a bit more on something like the GTX 1660 Ti or even RTX 2060 if you’re looking for that kind of speed further up the quality scale.

However, while the GTX 1660 still came out on top of the GTX 1060 in 99.9% of cases at 1440p, there were still a couple of instances where it actually fell behind its older rival – and that was chiefly in those games where it had already been pretty close before back at 1080p.

On max quality at 1440p, for example, it was business as usual. I’ll be going into more detail about the GTX 1660’s 1440p performance in a separate comparison article (as I imagine most people here would be looking to buy it as a 1080p card), but in some places, such as Assassin’s Creed Odyssey, the GTX 1660 was miles ahead on Ultra High, going from an barely playable average of 27fps on the GTX 1060 to a very agreeable 37fps on the GTX 1660. I saw a similar 10fps boost in Shadow of the Tomb Raider as well, with the GTX 1660 managing an average of 51fps on Highest with its less demanding SMAA anti-aliasing enabled over the GTX 1060’s 40fps.

I must admit I was pretty surprised that the GTX 1060 still had some fight left in it, but much like before, you’re really only talking a handful of frames difference here, and certainly not enough to tell them apart by eye. At the end of the day, the rest of my test results on High came out very much in favour of the GTX 1660, with Monster Hunter: World, Forza Horizon 4 and even Metro Exodus showing similar 5-10fps jumps in speed as Assassin’s Creed Odyssey and Shadow of the Tomb Raider. 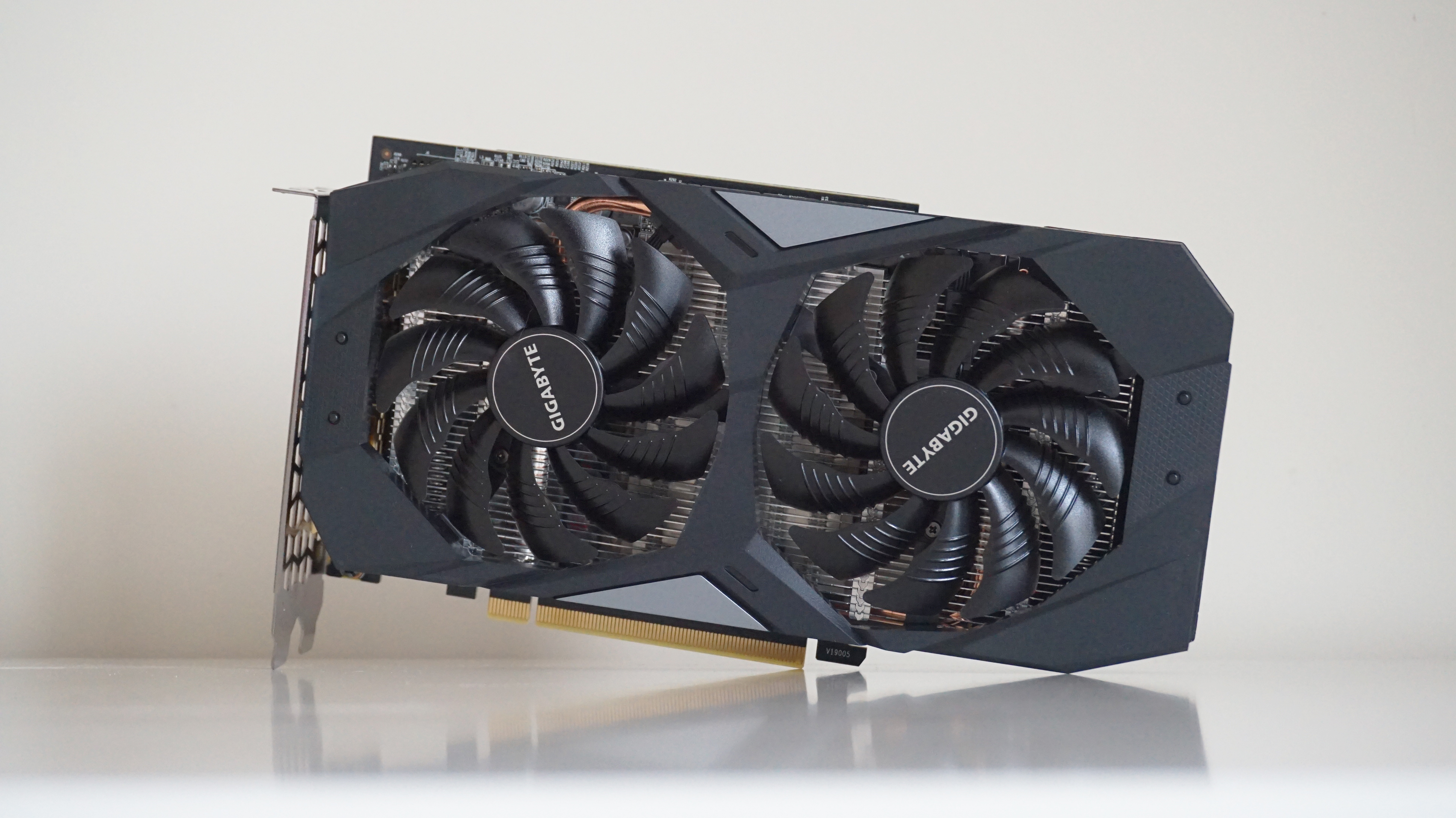 The RX 590, however, does come with three free games as part of AMD’s ongoing free games bundle (Devil May Cry 5, Resident Evil 2 and The Division 2), which arguably makes it better value overall. At time of writing, Nvidia have yet to confirm whether the GTX 1660 is getting any kind of bundle deal, but given there’s currently no bundle deal attached to the GTX 1660 Ti, I think it’s unlikely the GTX 1660 will get anything either. The RX 580, meanwhile, lets you choose from two of those games, which together with its slightly lower price may be enough to offset its closer to GTX 1060-levels of performance.

It’s a tricky situation. In terms of raw speed, the GTX 1660 is a really tough act to beat at this price, and definitely the card you should buy instead of the 6GB GTX 1060 if you’re after 60fps on High-Ultra settings at 1080p and Medium-High at 1440p. However, if you want any of the games in AMD’s current bundle, then you may as well go for the equally nippy RX 590, as the amount of money you’d normally spend on just one of those games will automatically wipe out the extra cost of the card.

I should note that AMD’s free games bundle only lasts until April 6th 2019, though, so depending on what they follow it up with (if anything at all), then the GTX 1660 may well regain its crown as the ultimate graphics card for £200 / $220. Until then, however, the value proposition offered by the RX 590 is almost too good to pass up.