Now streaming live:
Premature Evaluation is the weekly column in which Steve Hogarty explores the wilds of early access. This week Steve became trapped in an endless post hell in Willowbrooke Post

Oh, to be a postman. That sultry steward of the mail. That beautiful bastard with the letters. That outrageous freak of parcels. That walking obscenity in Gore-Tex red. That creep who lives inside a van and cannot die, because the postman is both one and many, everywhere and nowhere, always and never. Ding-dong, goes the siren song of the elusive postman. Can you sign for this? The ancient words slip from his wet mouth like forbidden lyrics to a forgotten ballad. And then he is vanished as a wisp. And in your hands the printer cartridges you ordered. And all is still once more.

That’s a poem about lovely postmen that I just came up with, because I love post. Thanks.

Willowbrooke Post is an enticing prospect, promising an escapist simulation of an idyllic rural occupation that you can’t help but feel immediately drawn to: the dignified life of a postperson. The game boldly presents itself as a three-dee, first-person Stardew Valley in which you take management of a village’s post office, sorting through their letters, wrapping and labelling their parcels to ensure they get to their destinations safely, while improving your reputation with the local townsfolk by being kind to them and asking them how their day’s going. 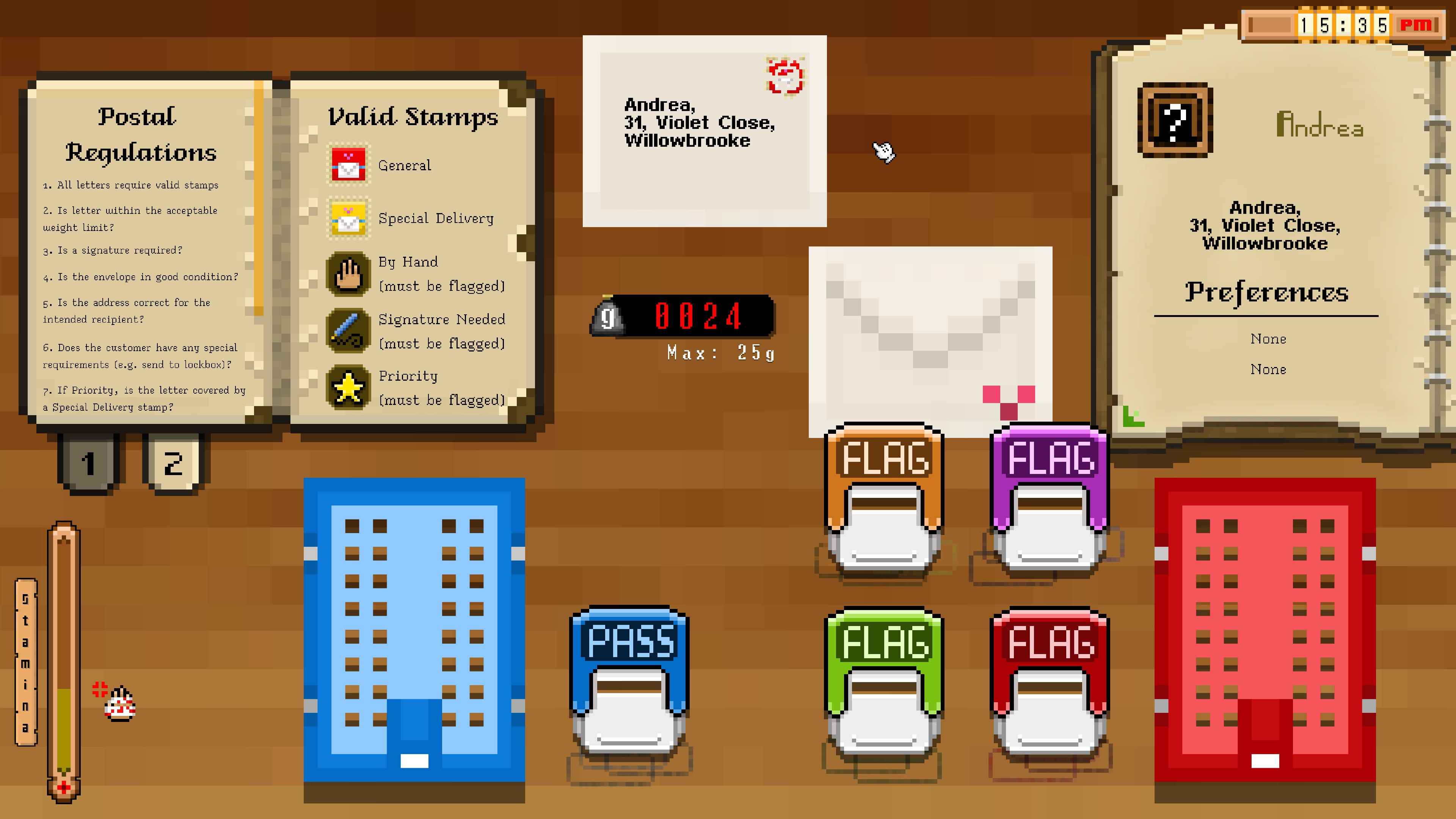 That’s a truly wonderful idea for a game, and one I really would like to play, but Willowbrooke Post falls way short of this simple pitch. This is not the wistful and uplifting experience I had imagined. Not even nearly. Masquerading as a postman for a little while is precisely the type of distraction we need right now, but even with the Early Access expectations bar set inches from the floor, Willowbrooke Post is an incomprehensible mess of bad ideas, and probably the worst thing to happen to me all day.

You are, at the very least, technically a postman, albeit one trapped inside your own post office with a set of postage paraphernalia and very little to actually do with it. Letters appear in the mailbox at the far end of the room, to be collected and taken to the sorting office where a Papers, Please style sorting minigame has you checking for bad addresses and overweight envelopes. You’ve got a set of stamps with which to stamp each envelope in turn, depending on whether everything is in order or not, or on the particular preferences of the recipient. Some don’t want junk mail, some have lockboxes, and so on.

It’s straightforward enough, but buggy beyond all redemption. Sometimes you get stuck on this screen forever, trapped in letter sorting hell until you pass out from exhaustion. Using the wrong stamp hits you with a fine (it’s not clear why, or from whom, but running out of cash abruptly ends the game), unexplained icons litter the screen, and addresses sometimes hover above invisible envelopes like a bad Hogwarts spell gone wrong. It’s about as entertaining as sorting a handful of your own teeth. 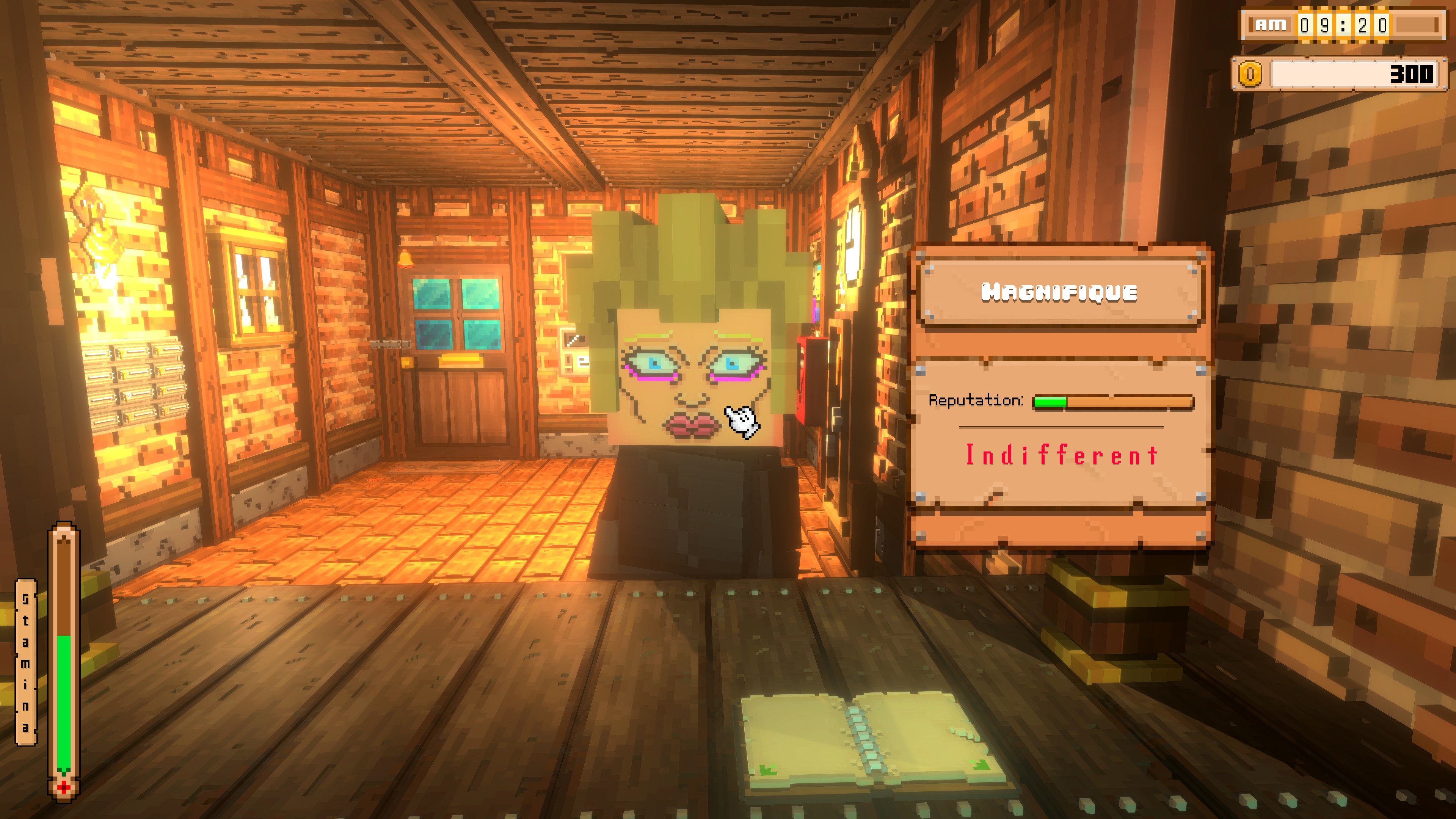 Occasionally somebody from town will show up, though I’ve only encountered two of them. The first is Magnifique, a fabulous, smokey-eyed drag queen who wants you to retrieve her camera from the store room. The second is a guy who asks you to send a parcel – as far as I can tell the only time you’re ever asked to do this – by pressing a series of arcane buttons on the rear wall of the post office. And that’s it in terms of customer interaction.

I’m mostly confident there’s nothing more to see or do after that, but it’s difficult to be absolutely sure because this game about being a postman also has a set of incongruous and punishing survival mechanics. A stamina meter is constantly depleting as you endure the incredible effort of moving around in this tiny room picking up letters. Willowbrooke Post is less of a postman simulator than it is an artistic expression of somebody living with chronic fatigue. By around noon each day I was blacking out at the front desk and waking up in bed the following afternoon with a punitively docked stamina meter and a brand new stack of bills to pay.

Unless you can find some scraps of food in the junk mail that arrives daily on your doorstep, the protagonist’s hummingbird-like constitution requires that you sleep for about 20 hours each day, using the few hours of energy you can muster to sort a few bits of mail before crawling back up the stairs as the tunnel vision sets in, like some oxygen-starved mountain climber. This game is set inside a postman’s personal vision of hell. Nothing here makes sense. This is the Twilight Zone of post offices, and your inability to ever go outside or stay awake compounds the sense that you might actually be dead. After all, what is a mail depot if not a kind of postal purgatory? 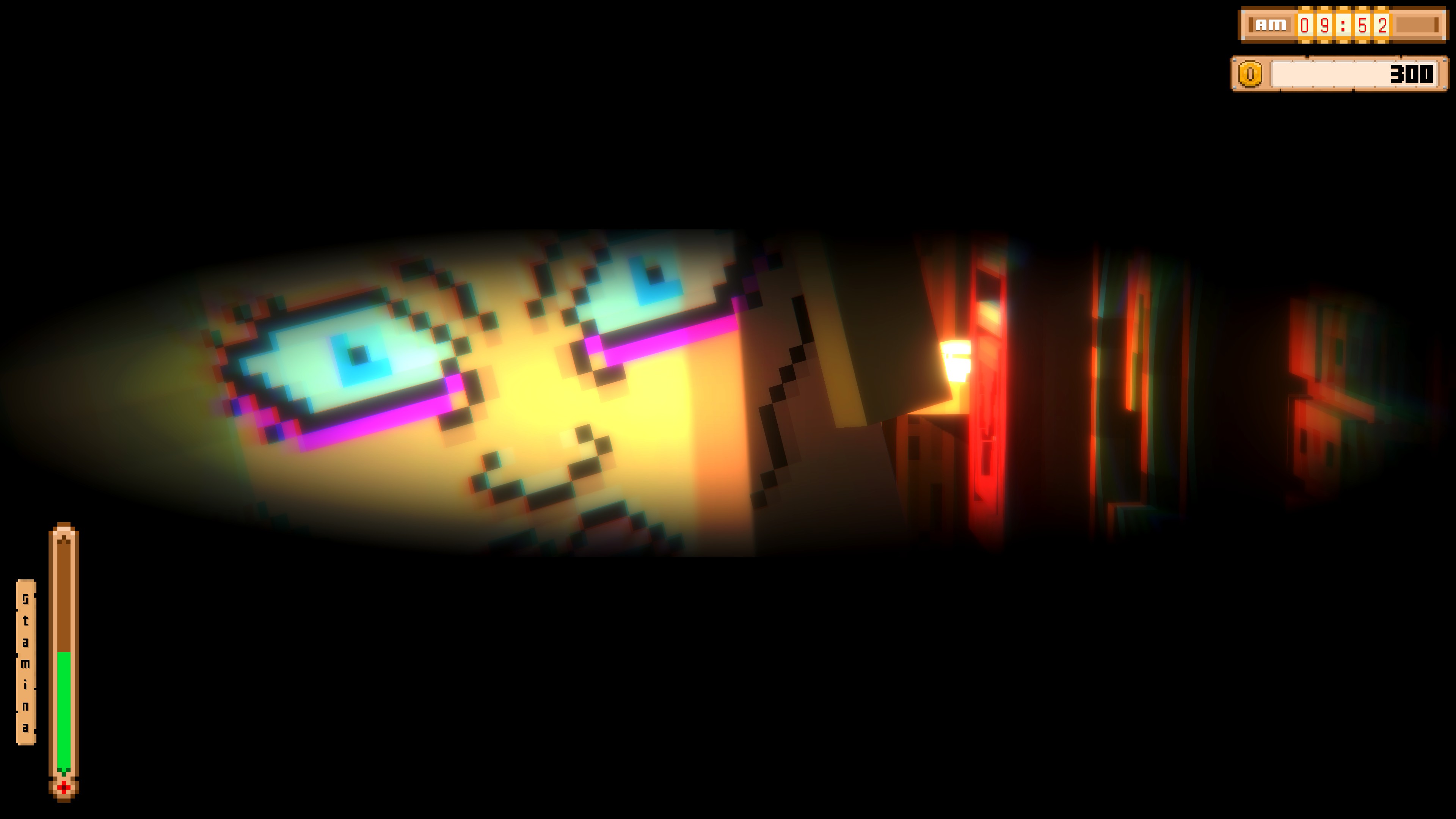 And for reasons known only to the developer, he’s coded it so that your lightbulbs can explode at random, but set the chances of that happening way too high. By the second day you’re haunted by the sound of breaking glass every few seconds. Bulbs pop over and over again, as though a malevolent poltergeist is throwing a tantrum, when all you want to do is be a postman like it said on the Steam store page. It’s so strange and upsetting, and no fun at all.

I was a postman, once. When I was 10 years old, a local double glazing salesman asked me to deliver flyers around town, handing me a fat stack of yellow, postcard-sized sheets to take door to door. It felt like such an important task, and I was honoured that an adult had trusted me enough to do it. Ten minutes in, I threw most of the flyers in the pond near my house where I would catch tadpoles in the summer, and used the money to buy Panini stickers for my Premier League ‘98 album.

Perhaps that’s why Willowbrooke Post’s similarly botched attempt at a postal simulation has left me feeling so personally shaken. It is ultimately a reflection of my own failings as a postman. But I did finish that sticker album, after swapping for the left half of the Spurs team photo with Darren McCabe at school. So that’s something.