Let’s think about chili powder. Base a whole meal around this popular red dust, and unless you know what you’re doing, you’ll end up with a plate of searing garbage fit only for ladboasts. But soothe chili into the ingredient lists of other meals – even those you wouldn’t usually associate with it, like fancy chocolate – and you can add a whole new element of sensation to your meal. It’s a team player, is what I’m saying.

I reckon horror in games works the same way. Yes, it’s possible to cook a michelin-starred vindaloo like Alien: Isolation, where the heat is the main event. But often, the horrible is tastiest when it’s creeping out from behind something else, entirely unexpected.

Which is how we come to Let’s Play: Ancient Greek Punishment: Teaches Typing, the most memorable lowkey horror game I’ve played in a good while. Developed by Montréal-based academic and game designer Pippin Barr, LP:AGP:TT is the seventh in a series of short games based on ironic punishments from Greek myth, which Barr calls “an investigation around what it means to make the ‘same game’ multiple times”. 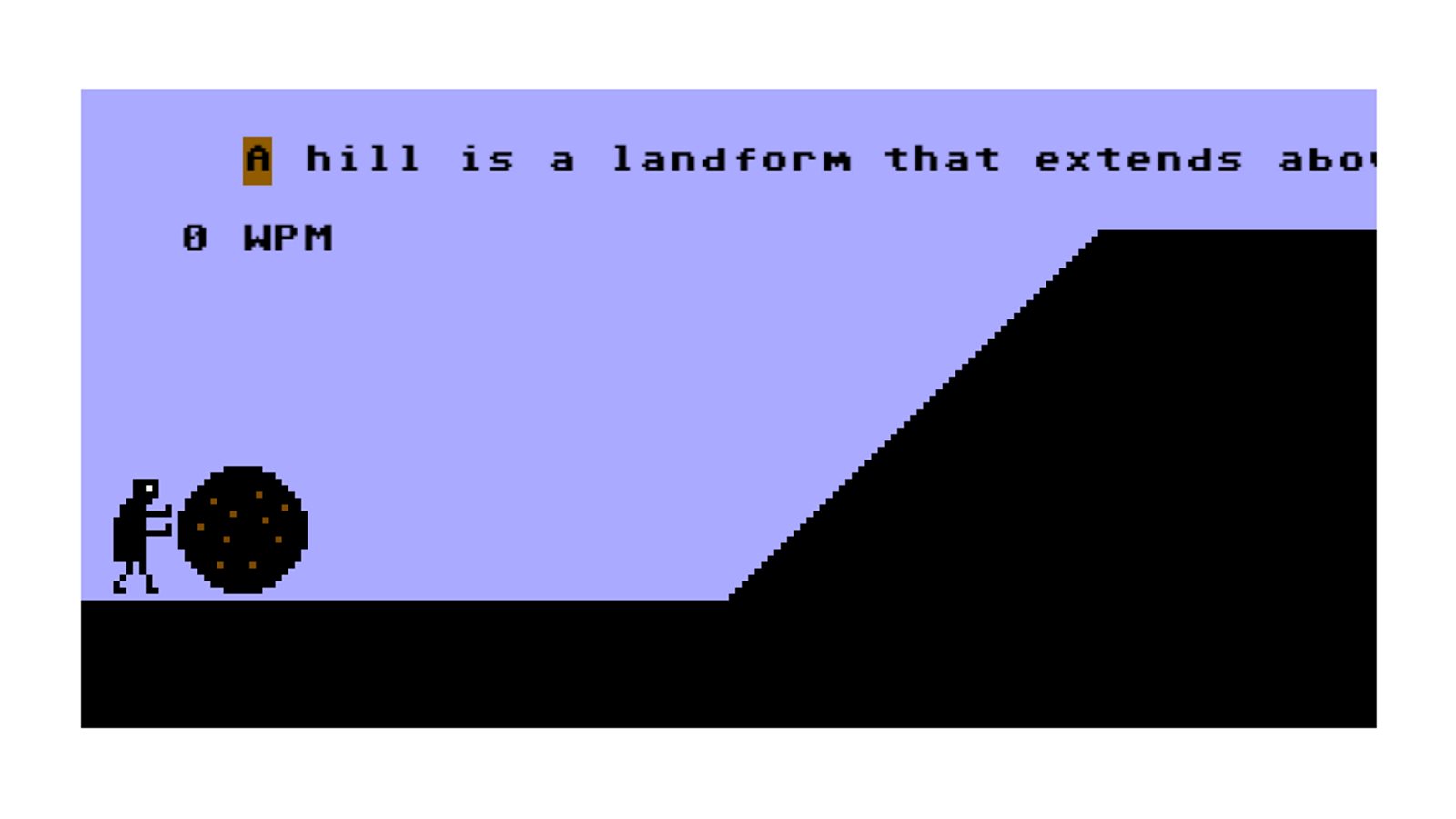 Know your punishments: Sisyphus
Who were they? A tricksy king.
What did they do wrong? Acted like the big man, angering Zeus.
What’s their task? Rolling a boulder up a hill.
What’s the catch? Every time he gets the boulder to the top, it rolls down again.

Since Barr released the original Let’s Play: Ancient Greek Punishment in 2011, the format has been roughly consistent, with each game comprising an anthology of five pixel art minigames putting the player in the shoes (sandals?) of various Greeks getting existentially beasted in the abyss of Tartarus.

In this iteration of the Punishment series, the player carries out their chosen sentence through touch typing, in the manner made familiar by the type specimen (heh) of all typing games, Maevis Beacon Teaches Typing. Correctly inputting prompted words will drive the actions of the punished, rolling Sisyphus’ boulder up the hill, or keeping Prometheus wriggling to hold the eagle at bay. 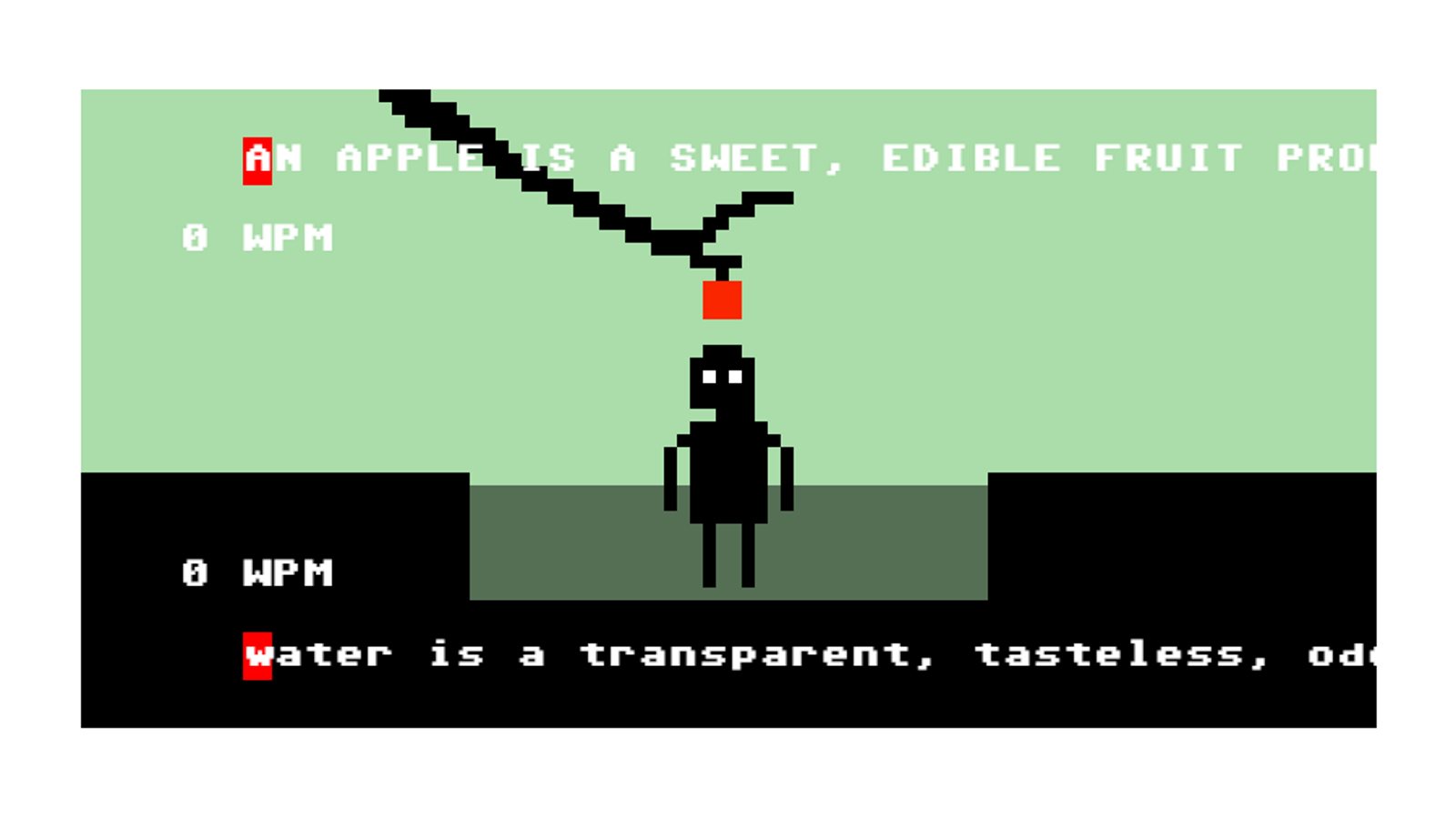 Know your punishments: Tantalus
Who were they? Some geezer, possibly the son of Zeus.
What did they do wrong? Nicked some honey or boiled their son, depends who you ask.
What’s their task? Standing in a pond, under a branch with some fruit.
What’s the catch? The fruit and water always yoink themselves out of reach. Tantalising.

Each minigame has three settings, differentiated by the complexity of the input text. On beginner mode, it’s a string of simple verbs relating to the task, while on intermediate, it takes the form of Bart Simpson-style punishment lines (“I will not anger Zeus. I will not seduce Salmoneus’s daughter”). On Advanced mode, the texts are weighty and abstract; in the case of Sisyphus, for example, it’s the wikipedia entry for hills. Barr says he chose these subjects as things the player character would desire but be forever unable to attain, thereby “taunting them by forcing them to dwell on [them]”.

It’s in these little design choices – and Barr is meticulously deliberate – that the game starts to get sinister.

When the game’s pre-release email came into the RPS treehouse, we all had a good roffle at it, then moved on. It was a neat little joke that didn’t take long to get, and it made us feel smart for recognising some highbrow classics references (for the real sophisticates, attempting Sisyphus on all three modes will unlock a special Camus level). But five minutes after closing it and starting something else, I found I was still thinking about LP:AGP:TT. 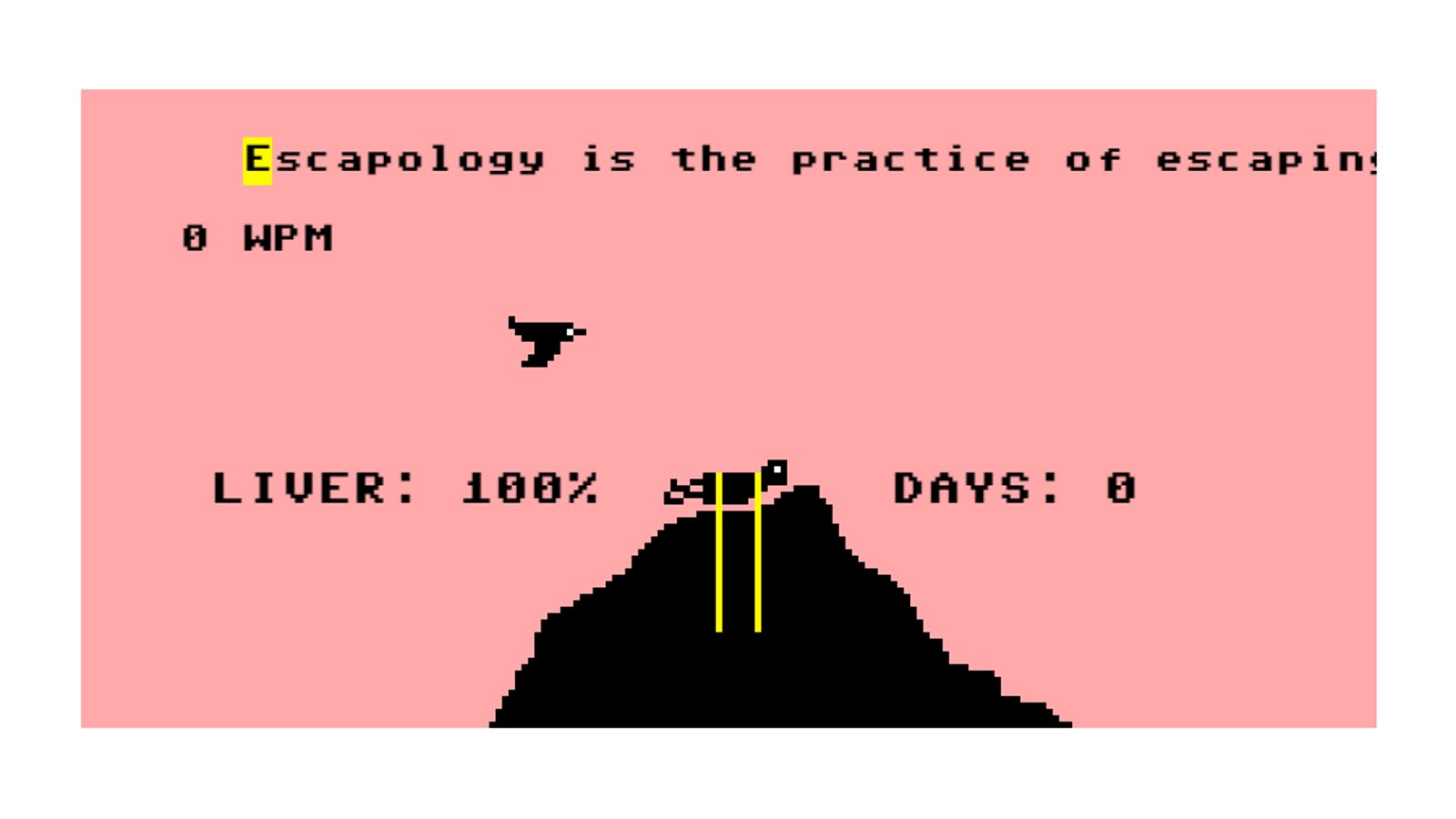 Know your punishments: Prometheus
Who were they? A titan.
What did they do wrong? Breached Olympian infosec.
What’s their task? Lying on a mountain, waiting for an eagle to guzzle his liver.
What’s the catch? Every time his liver gets eagled it wolverines itself back to full health.

You see, there had been a definite window of time, in between the moment I got the most out of the joke, and the moment I stopped playing, which had been admirably unpleasant. I had been playing the Prometheus minigame, typing away, keeping the eagle hovering above me with my lexical writhing. I realised that I could type sentence after sentence – for minutes, or hours, or years – but eventually I’d have to stop, and the pretend eagle would eat my pretend liver. Which would then grow back. I was only prolonging the inevitable, and the game, being a piece of code, could wait forever.

Worse yet, there was no button for ending the game, or returning to the minigame menu. The only way out was by making the out-of-game intervention of a browser refresh. At first, I thought this was a usability error, but I had a sneaking suspicion it wasn’t. Checking with Barr, my fears were confirmed: “It’s philosophical,” he says. “Each punishment is eternal, so it doesn’t make sense to be able to return to a menu to choose a different one. Once you’re in eternity, it’s forever.”

Oof. With these little features the game made me think, just for a moment, of the awfulness of Prometheus’ fate. It neatly illustrated what these myths were in the first place: ghastly thought experiments, designed to freak people out by making them imagine something really horrible. 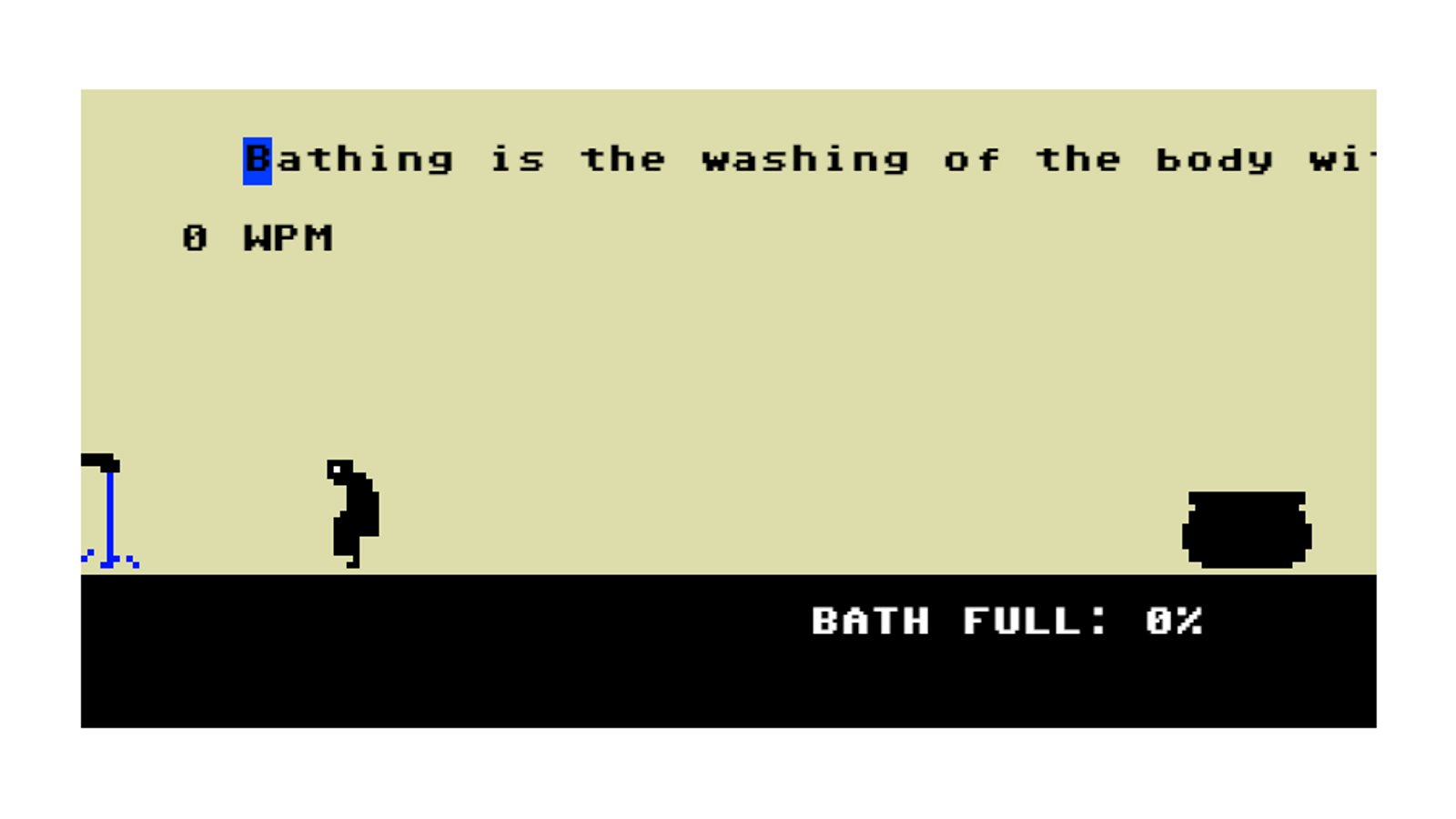 Know your punishments: The Danaids
Who were they? Forty nine murderous brides.
What did they do wrong? Ganked their husbands.
What’s their task? Filling up bathtubs to wash away their sins, using jugs.
What’s the catch? The baths are full of holes.

Of course, Barr’s original Punishment game in 2011, controlled by button mashing, achieved this equally well. But there’s something especially cruel and unusual about hitching this particular artistic wagon to the vile horse of touch typing.

Videogames have proven such effective captivators of human attention, that developers of non-leisure software are now ransacking the anatomy of games to make awkward tasks more appealing. From language learning to online bureaucracy, we’re having our dopamine release systems hoodwinked into making us more productive, and touch typing was one of the earliest disciplines to jump on this bandwagon.

As such, there’s something I utterly fucking love about the idea of a touch typing game themed on eternal ironic punishment – arguably one of the most demotivating, demoralising concepts ever. As a player of LP:AGP:TT, rather than urging yourself on through another rattledy-tap sentence with the prospect of a shiny prize once you reach the end, you’re glumly realising that the full stop’s a boulder, and it’s only going to roll back down on you.

Let’s Play: Ancient Greek Punishment: Teaches Typing is out today, and is playable free of charge as a browser-based, desktop-only game.