Acer have unveiled a new monster 17.3in gaming laptop that has an extendable keyboard to help keep it cool. Dubbed the Predator Helios 700, Acer’s new flagship laptop promises “desktop gaming performance on the go” thanks to its full-fat Nvidia GeForce RTX 2080 graphics chip and one of Intel’s brand-new 9th Gen Core i9 mobile processors. Just make sure you don’t whip it out on the train, or you might accidentally puncture a lung.

It’s a mad concept – although not quite as bonkers as the Asus ROG Mothership I saw at CES, which has a fully detachable keyboard – but the idea is to allow more air to reach the laptop’s processor and GPU to help prevent it from throttling and overheating.

It’s actually not too dissimilar from the design of the Asus ROG Zephyrus S I reviewed yesterday, which shunts the keyboard down to the bottom of the laptop to make more room for its fans. Only here, the whole of Acer’s so-called HyperDrift keyboard (because everything sounds better with the word ‘Hyper’ in front of it) slides down to reveal the fans beneath it.

This provides more scope for overclocking, which you can do with a single click thanks to its dedicated Turbo button, and getting the maximum amount of performance from it. In this position, the touch pad also drops down at an angle to hopefully give your hands somewhere comfortable to rest – although I’ll have to wait until I’ve tried it out in person before I can say how comfortable it is in practice. 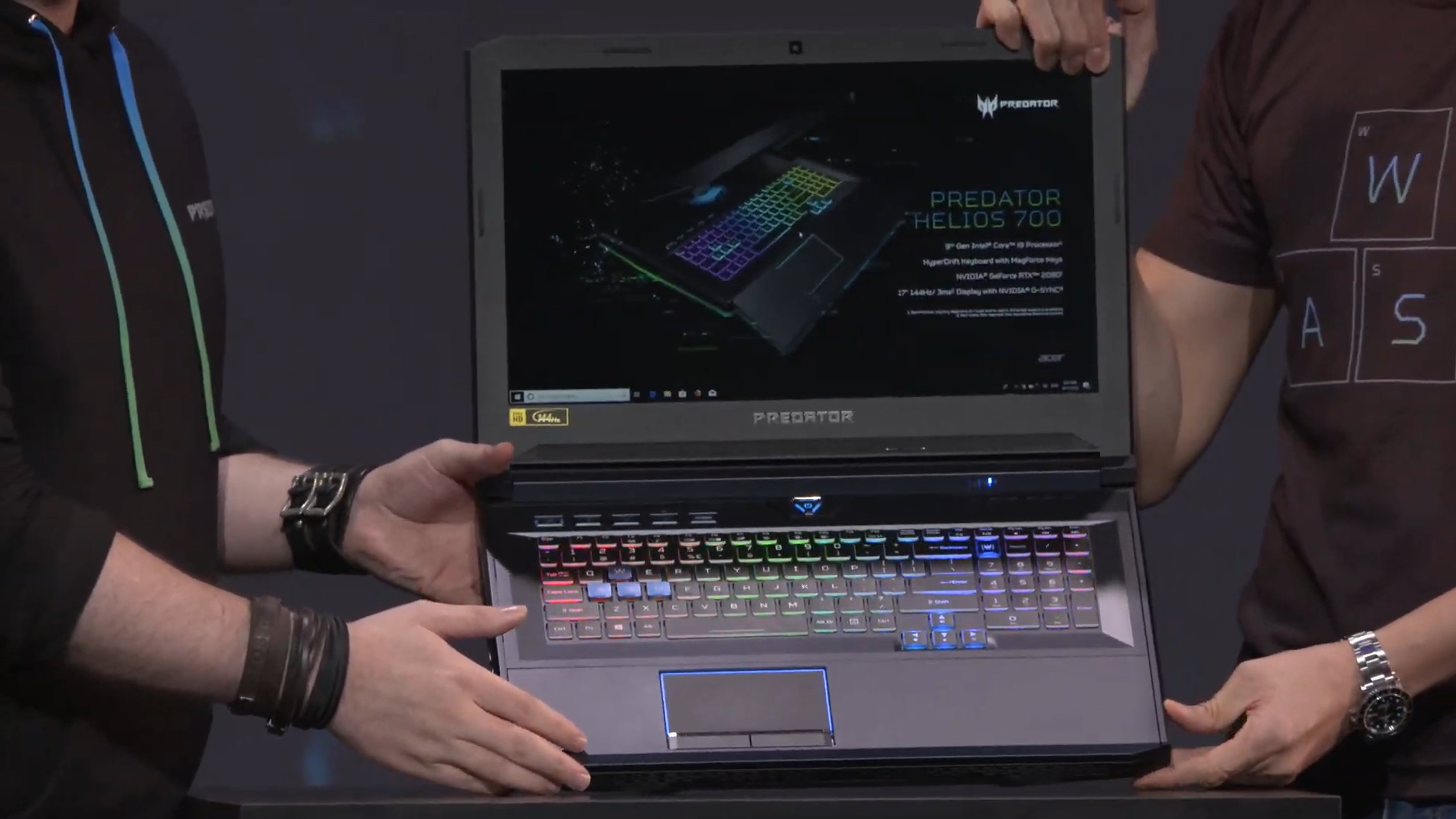 Open up the Helios 700 and it looks like an ordinary gaming laptop, but slide it down… and ta da! 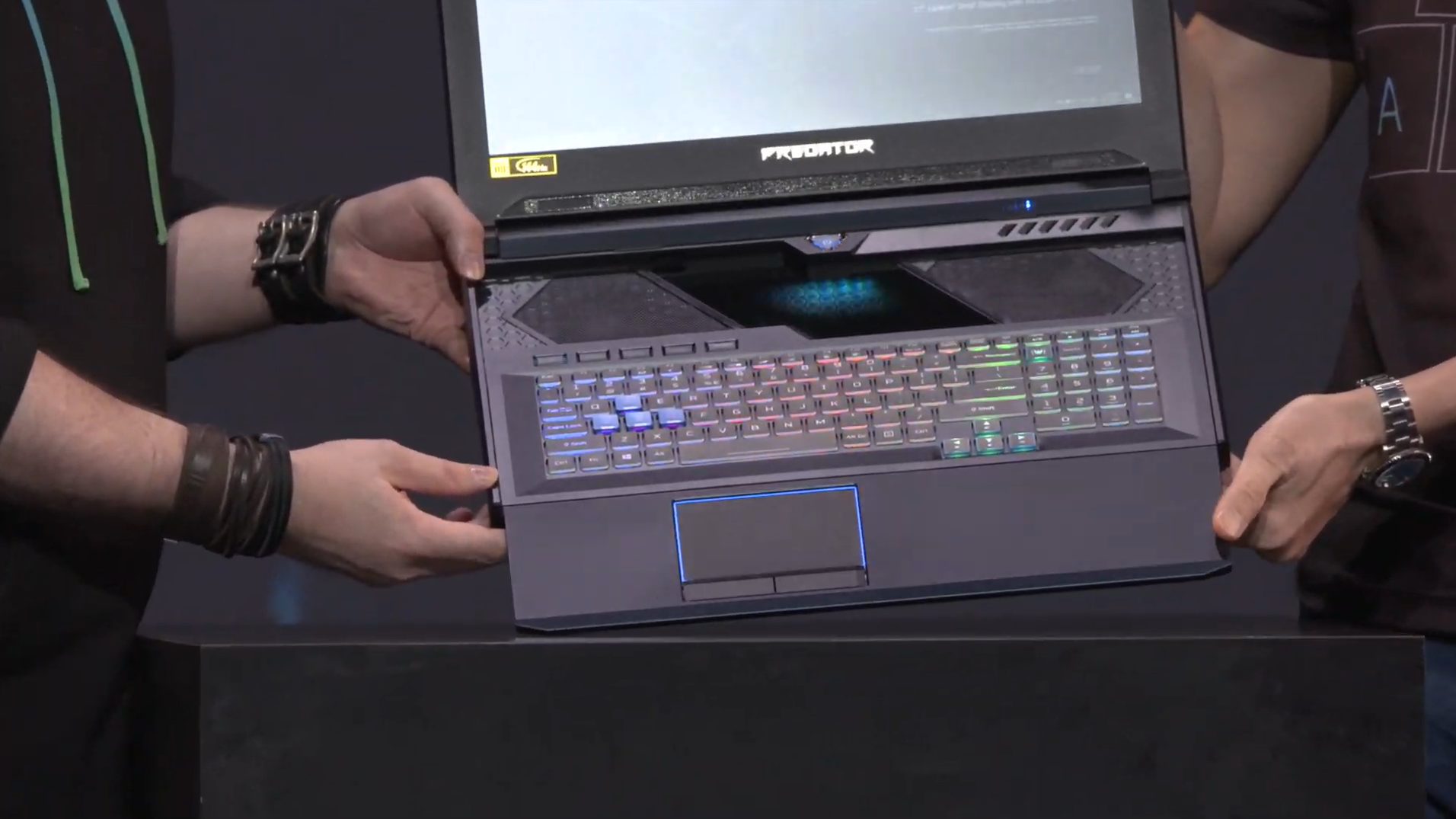 Now, the eagle-eyed readers among you may have noticed that the Helios 700’s WASD keys look slightly raised compared to the rest of the keyboard. That’s because they’re MagForce keys, which use linear switches for that short, sharp mechanical-like feeling of a full-blown gaming keyboard. The neat thing about these, however, is that they also work a bit like an analogue stick on a controller. Press it half way down, for instance, and you’ll walk at half speed, a bit like pushing an analogue stick just a teensy bit forward instead of all the way to the edge.

Personally, I’m not convinced this will be particularly practical in everyday use – after all, pushing a flat key down is quite different from pushing a vertical stick in any given direction – but it’s nevertheless an interesting addition that I’m keen to see in practice as soon as review samples become available. The rest of the keys, meanwhile, are just regular dome-style laptop keys. And of course, it wouldn’t be a gaming laptop with per-key RGB lighting rounding it all off.

Acer top man Jason Chen didn’t go into much detail about the rest of the Helios 700’s specs – the 9th Gen Core i9 Intel processor is still under wraps at the moment and is due to be launched in a couple of weeks time – but he did reveal that this will also be overclockable and support Intel’s super fast Optane Memory to help cut down on loading times.

The only big disappointment about the Helios 700 is its 1920×1080 resolution display. Sure, it has a 144Hz refresh rate and Nvidia G-Sync support – which the RTX 2080 is almost certainly going to be able to make full use of – but given the rest of its high-end specs, it would have been nice to see a 4K option as well.

Still, a 4K screen would only make this thing even more expensive than it already is, with prices due to start from a whopping $2700 in the US when it launches later this month, and 2700€ (UK pricing is yet to be confirmed) when it arrives in Europe this July.