Take a look at the specs of any of today’s gaming laptops and there’s a 99.9% chance it’s got an Intel CPU and Nvidia graphics chip inside it. That’s mostly because AMD haven’t really bothered with gaming laptops for the last couple of years, but that’s slowly starting to change. Case in point: Acer’s Predator Helios 500 laptop, which is available in both AMD and Nvidia graphics flavours. The former has one of AMD’s Radeon RX Vega 56 chips while the latter comes with a full-fat GTX 1070.

But rather than review each one individually, I thought I’d do something a bit different this time and get both models in and pit them against each other to see which one you should actually buy. After all, both laptops are roughly the same price in the US right now ($1898 for the Nvidia one and $1829 for the AMD), while the AMD version in the UK is around £300 cheaper, going for £1499 as opposed to £1769 for the Nvidia jobber. Which one will triumph? Let’s find out.

First, let’s look at what each laptop has in common. Both are 17.3in behemoths in terms of size and overall weight, and are very much intended as desktop replacement laptops rather than something svelte and portable like the Asus ROG Zephyrus S. Each one also has a 1920×1080 resolution and a 144Hz refresh rate, and they each support their own variable refresh rate tech (G-Sync on the Nvidia model and FreeSync on the AMD one) for super-smooth gaming and minimal screen tearing.

In terms of image quality, however, they’re far from identical. The AMD one is actually a smidge more accurate than the Nvidia model, covering 87% of the sRGB colour gamut as opposed to 85%. Not a huge difference, all told – and one I certainly wasn’t able to pick apart when looking at the same images on them side by side – but I was surprised it wasn’t the other way around, to be honest, given how strict Nvidia tend to be when it comes to the quality of every single G-Sync panel.

That said, the Nvidia Helios 500 did, in fact, have a higher overall brightness level, peaking at 316cd/m2 compared to the AMD Helios 500’s 287cd/m2. You probably won’t need anywhere near either of these figures for general, everyday use, to be honest – the AMD screen felt perfectly fine on 75% brightness, for example – but having that extra bit of leeway can be useful if you ever end up taking it outside, or work near a particularly bright, sunlit window, for example.

The Nvidia Helios also had a superior black level compared to its AMD sibling, coming in a fraction deeper at 0.24cd/m2 versus the AMD’s 0.29cd/m2 – the latter of which, I should note is still excellent, but the closer it can get to 0.00cd/m2 (true black), the better. I also measured a higher contrast ratio on the Nvidia Helios 500 (1342:1 as opposed to 969:1 on the AMD), but once again, there wasn’t really much in it when I looked at them side by side.

The RGB keyboard is, of course, identical across both Helios 500 laptops, and offers loads of travel and lovely tactile feedback. I was able to get up to my regular typing speed in absolutely no time at all when I first started using it, and the sensible font Acer’s picked out for it isn’t overly ‘gamery’ either (although that’s a pretty small consolation when the rest of the laptop definitely is very gamery). 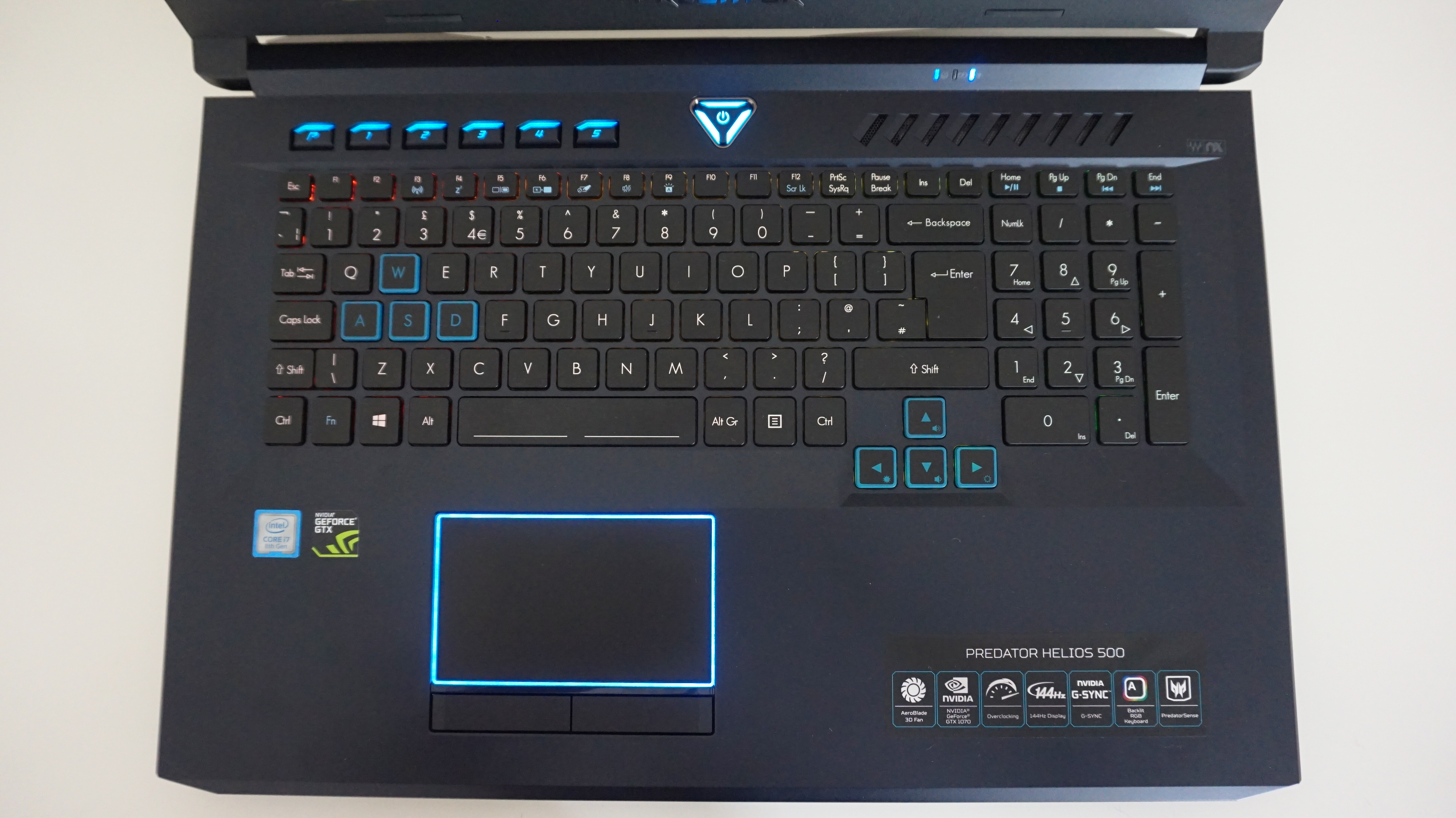 Still, it’s full-sized, so you get a proper number pad over on the right hand side of the keyboard, and Acer have also included five programmable buttons above the main Fn keys. These can be configured in Acer’s Predator Sense software for things like one-click overclocking of your GPU, macro controls, or launching certain apps or games to name just a few options, and the adjacent P button lets you switch between three different profiles, giving you a total of 15 programmable controls altogether. That’s pretty generous as these things go, and it’s by far one of the better laptop keyboards I’ve used in some time.

They also come with exactly the same ports and connections, too. These include HDMI and DisplayPort inputs on the rear of the laptop next to the power connector, a full-sized Ethernet port, a total of four USB ports (including three USB3 ports one USB-C) and one Thunderbolt 3 port, plus dedicated headphone and microphone jacks. The only thing it’s missing is an SD card reader. 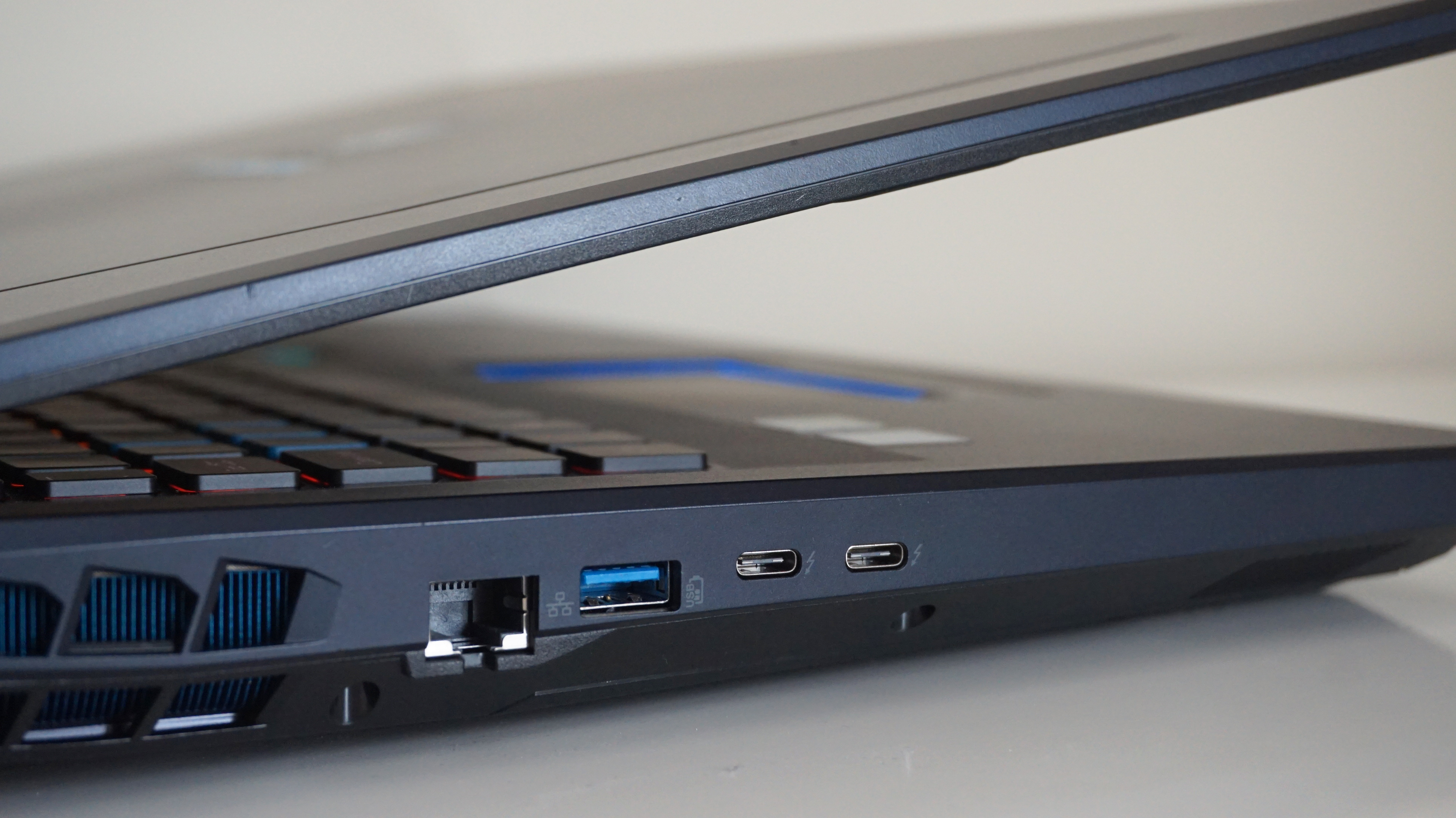 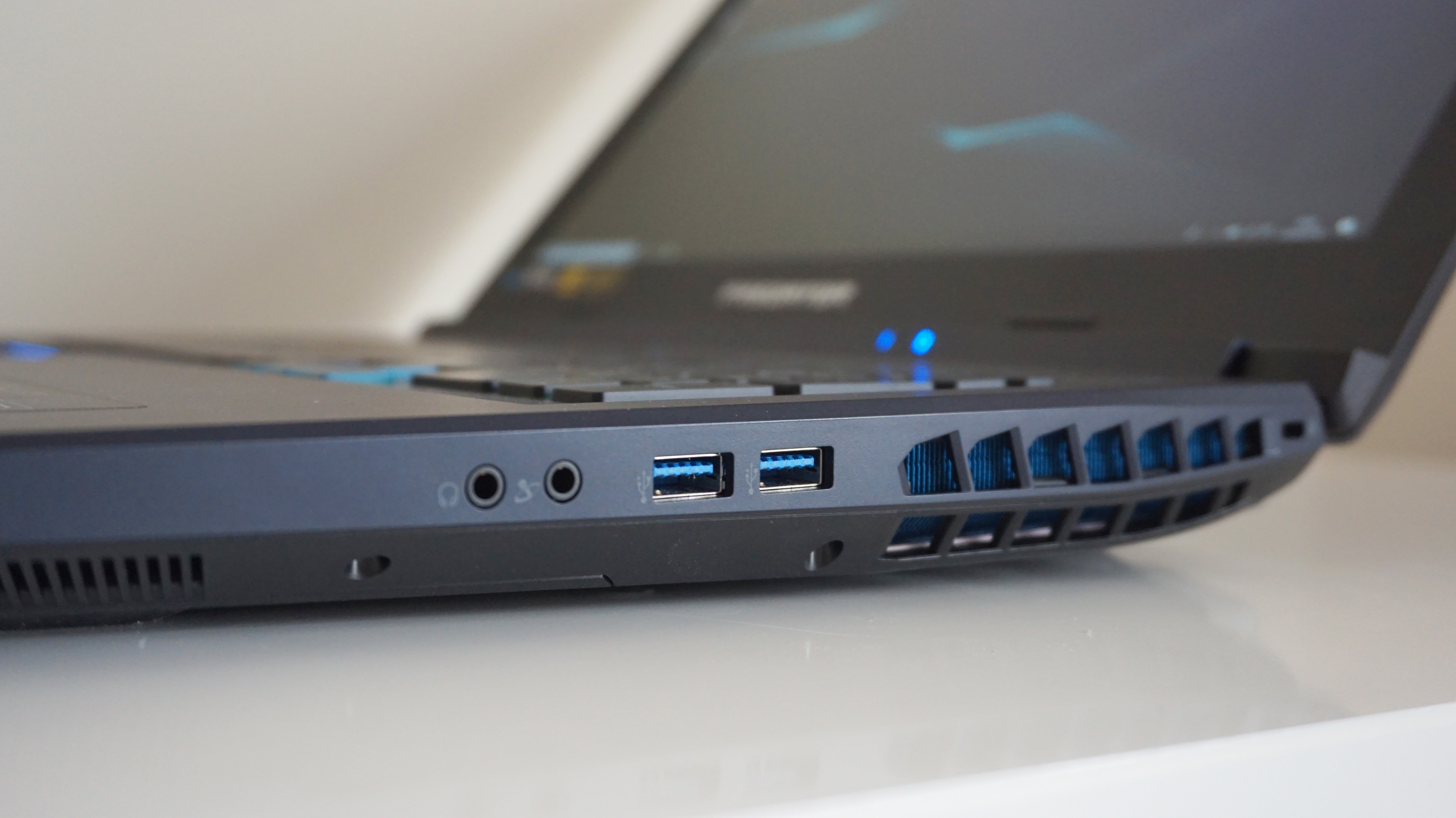 But let’s talk games. Over in desktop graphics card land, AMD’s Radeon RX Vega 56 and Nvidia’s GeForce GTX 1070 are pretty much neck and neck when it comes to overall performance, which is why I was so keen to find out how their laptop counterparts fared when they were stuck inside the same machine. And for the most part, it was the GTX 1070 that had the upper hand – just.

That’s mostly because, while both laptops bottomed out at roughly the same kind of speeds in a lot of my test games, it was the GTX 1070 that managed to stretch its maximum frame rate just that little bit higher, thereby giving it slightly taller average frame rate socks than its Vega 56 counterpart.

In Monster Hunter: World, for example, both laptops hit pretty much identical lows of 47/49fps on the Highest quality setting when I was tussling with giant dinos in the Ancient Forest, but the GTX 1070’s maximum frame rate topped out at 65fps compared to the Vega 56’s peak of 60fps, raising its overall average to 57fps versus the Vega’s 54fps average. 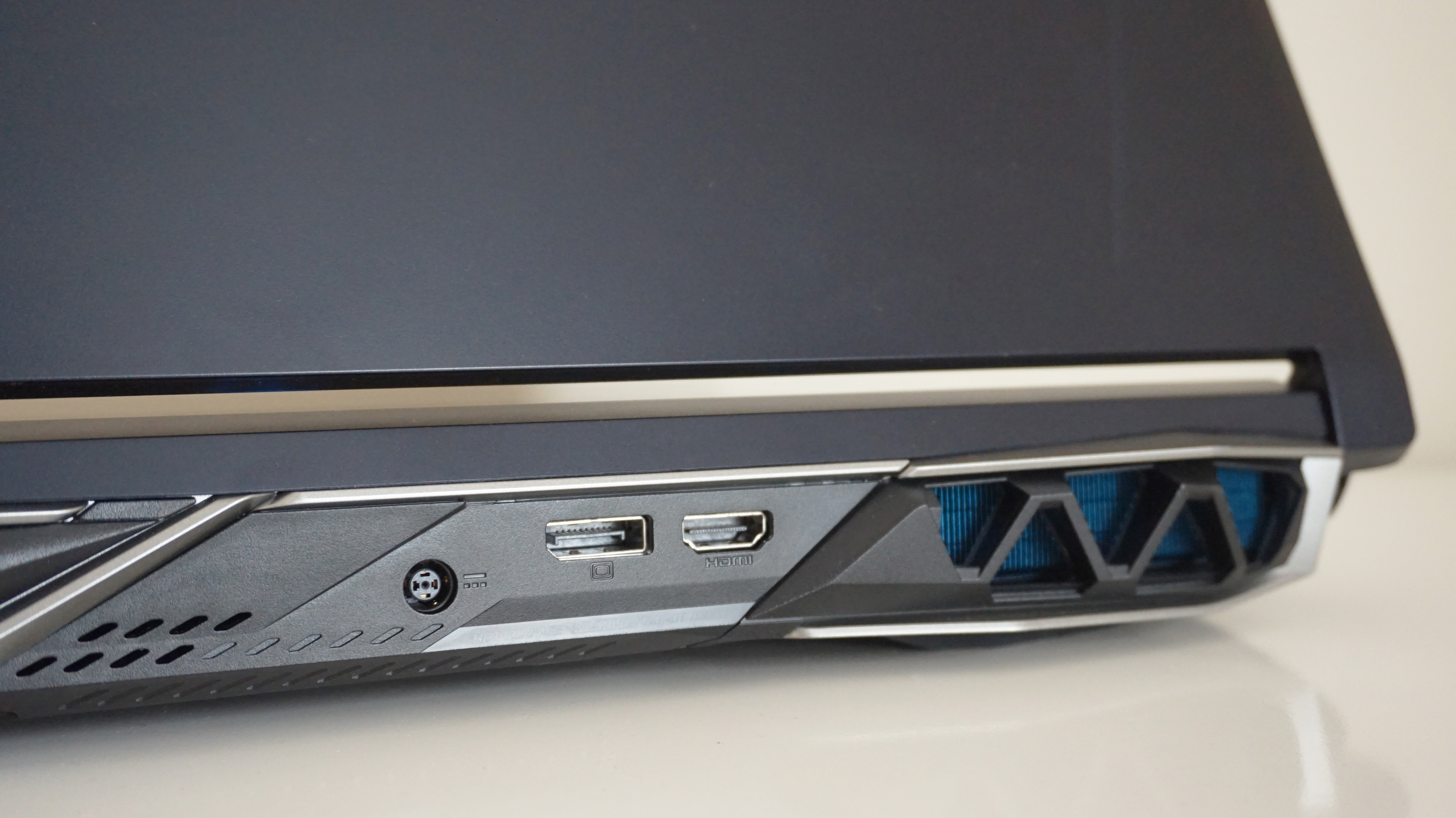 The same thing happened in The Witcher III as well. Both laptops never went below 61fps on Ultra quality settings at 1080p, but whereas the Vega 56 only managed a high of 78fps in some of the slightly emptier areas around White Orchard, the GTX 1070 shot up to 84fps. Of course, a difference of 6fps doesn’t sound like much on paper (and probably isn’t something you’ll even be able to see without the aid of a frame rate counter) but when you’ve got a screen with a 144Hz refresh rate, you’re going to want all the extra frames you can get in order to make the most of it.

Elsewhere, the GTX 1070 had a much clearer lead. When I was gallivanting up and down the hills of Duscae in Final Fantasy XV, for example, the GTX 1070 managed between 56-66fps with all of Nvidia’s extra effects switched off on Highest, whereas the Vega 56 was visibly a touch choppier at 48-62fps. It also goes without saying that the GTX 1070 is infinitely better equipped to deal with all those aforementioned Nvidia effects as well. The Vega 56 still put in a good showing with TurfEffects turned on, to be fair, but it absolutely crumbled when I tried switching on HairWorks as well, which isn’t really that surprising given it’s not kitted out for any kind of special Nvidia tech whatsoever.

The GTX 1070 also proved to be the superior companion for Shadow of the Tomb Raider, too, coming in with an average of 56fps in its internal benchmark over the Vega 56’d 46fps average. The gap narrowed when I dropped the settings down to High and only had its basic SMAA switched on, however, as here the Vega 56’s average of 72fps was only four frames behind the GTX 1070. The GTX 1070 reclaimed its lead when I moved over to Total War: Warhammer II, though, offering a full 10fps more than the Vega 56’s average of (appropriately) 56fps. 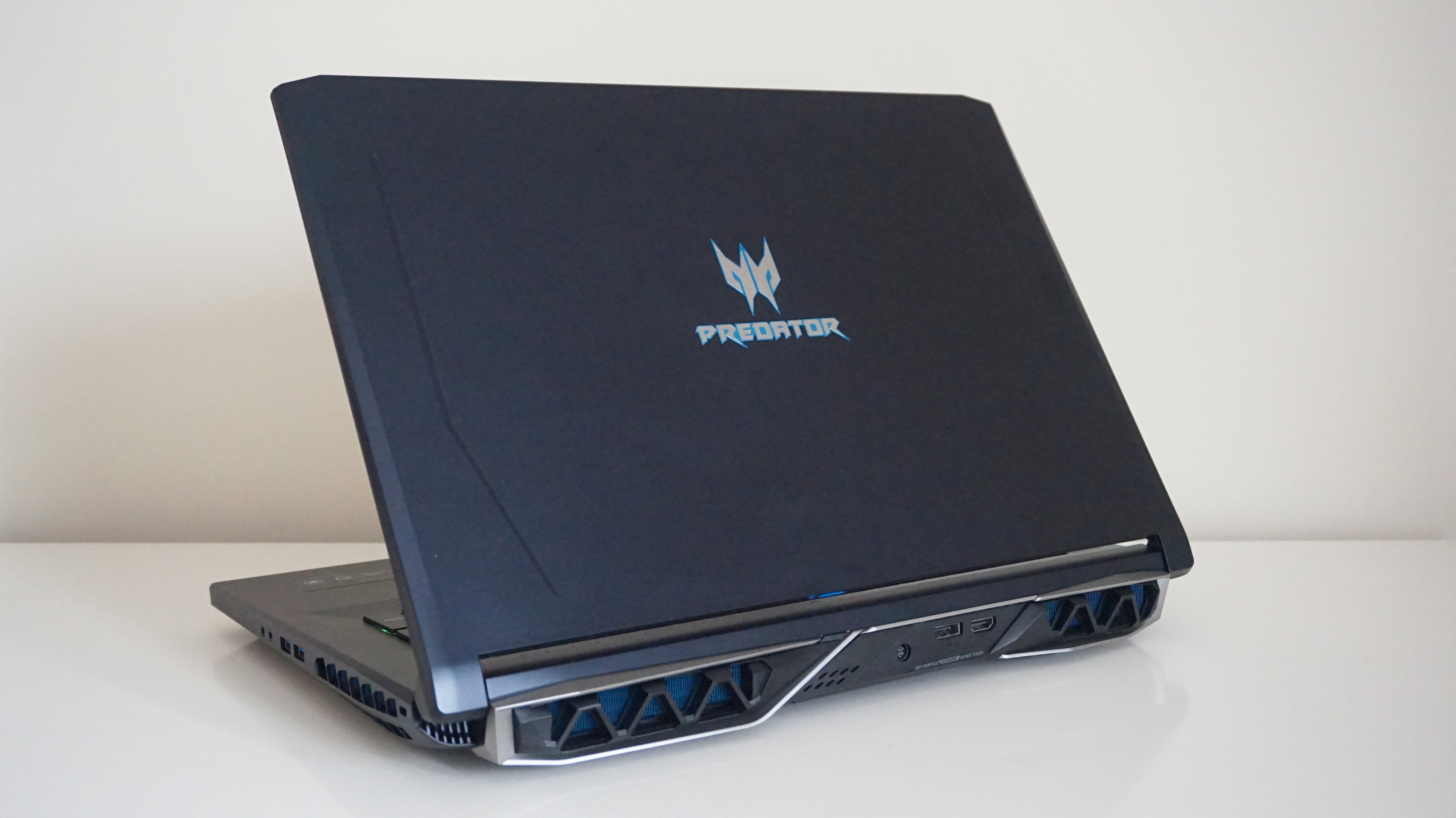 Overall, then, I’d say that’s a pretty cut and dry set of results for potential US buyers. While some performance gaps are smaller than others, the GTX 1070 still comes out on top in every game going, so it doesn’t really make much sense to opt for the Vega 56 Helios 500 when they’re so close in price.

However, while the GTX 1070 is the faster performer, I reckon the £300 price difference in the UK is wide enough to still make the AMD model a decent buy – especially when (*drum roll for the big, held back reveal*) both models produced nigh-on identical average frame rates in Metro Exodus as well. Here, the Vega 56 completed the game’s internal benchmark with an average of 47fps on Ultra settings, which was just 2fps behind the GTX 1070. That’s pretty decent, all things considered, and arguably goes a long way to make up for its slightly slower top speeds elsewhere.

The Vega 56 model also comes with the added benefit of one of AMD’s eight-core Ryzen 7 2700 processors inside it, too, which is much better suited to multi-tasking lots of different applications at once than the Intel Core i7-8750H CPU that comes with the GTX 1070 Helios 500. In Geekbench 4, for example, the Ryzen chip returned a multicore score of 21910, putting it miles in front of its Intel rival, which only finished with a score of 19051. Admittedly, the Intel chip clawed it back in the single core results, coming in with a much more impressive score of 4654 over the Ryzen’s 3991, but I wouldn’t say I noticed the Ryzen being noticeably slower in everyday use. 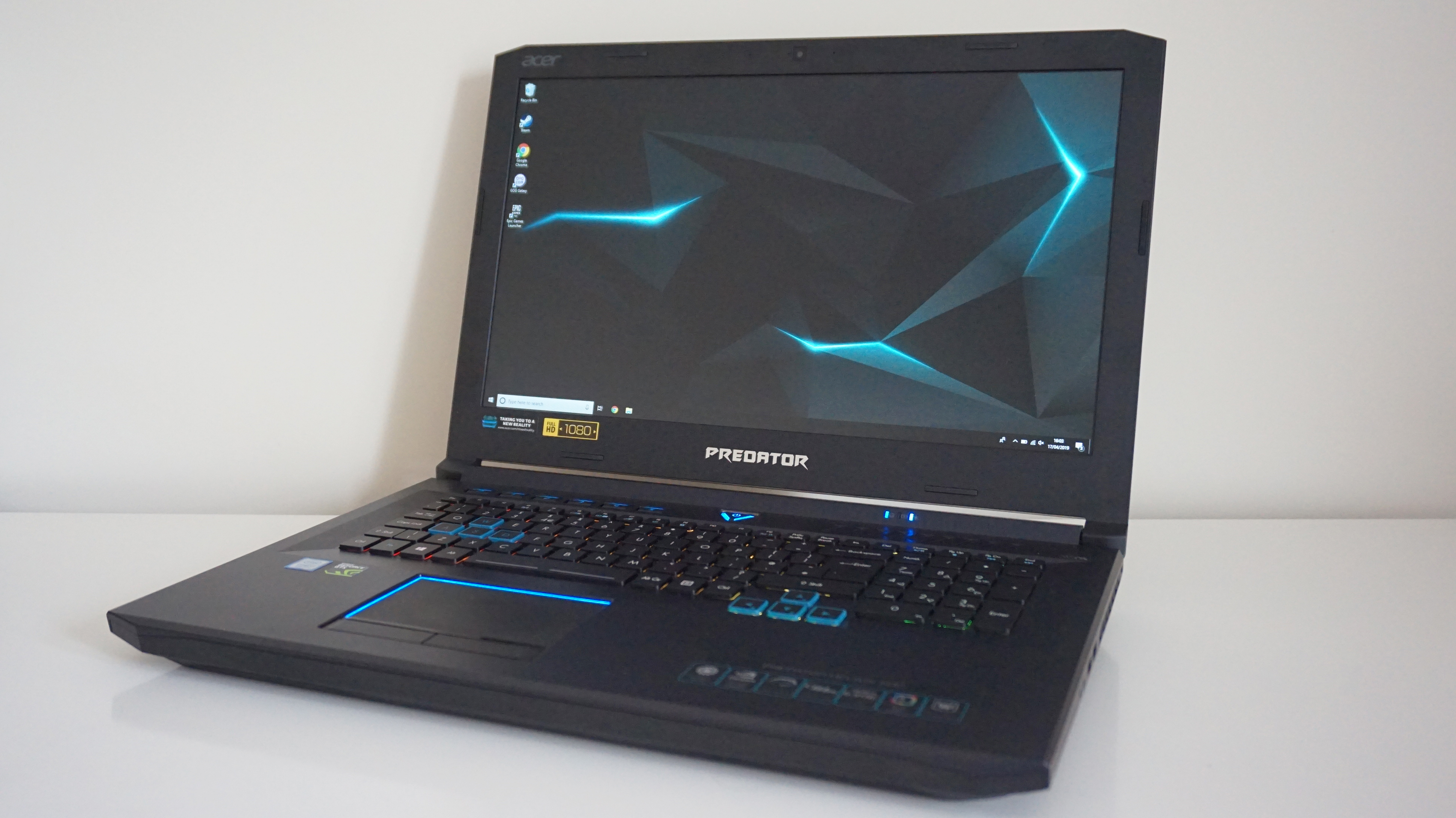 Ultimately, then, it’s a bit of a draw between these two gaming laptops, which I know is a cop-out, but there you go. The GTX 1070 Helios 500 is definitely the one you should go for if you’re buying it in the US, but I’d argue the Vega 56’s lower price in the UK more than makes up for the shortfall in its overall performance.

Although, considering you can also currently pick up the RTX 2070-powered Asus ROG Strix Scar II GL504 for $1878 in the US – which, at $20 less, is definitely a much better buy than either of these laptops – you could say the UK Vega 56 Helios 500 is the true winner here, if only because it’s the only one cheap enough to even consider buying in the first place. Case. Closed.