The Assassin’s Creed series has always been a tough nut to crack on PC. The latest Ancient Greek-themed instalment, Assassin’s Creed Odyssey, may be slightly easier to run than its Egyptian predecessor, Assassin’s Creed Oranges, but there are still times when it can feel like it’s delivering a great big Spartan kick-sized strain on your trusty GPU. Fortunately, I’m here to help, as I’ve been testing every graphics card under Apollo’s roasting hot sun to see how to get the best settings and the best performance in Assassin’s Creed Odyssey across a variety of resolutions.

Freshly updated with more of today’s best graphics cards than ever before, you’ll find everything you need to know here about how to get a lovely 60fps frame rate, and what quality settings you’ll need in order need to get it. Whether you’re here for its brand-new Fate of Atlantis DLC, hoofing lads off cliffs or the blush-worthy romances, here’s how to get the game looking as buff as the almighty Kassandra herself.

In terms of minimum and recommended specs for Assassin’s Creed Odyssey, Ubisoft have been a bit cautious this time round. The minimum spec, they say, is intended for use on the Lowest quality preset at a resolution of 1280×720, while their recommended set of components are for High quality at 1920×1080.

Both, however, are targeting a frame rate of just 30fps, which isn’t exactly useful if you’re after something closer to 60fps. Fortunately, you’re in the right place if you’re after 60fps, as I’ve tested every graphics card I’ve been able to lay my hands on to see what settings you need to get that elusive frame rate.

It’s also worth pointing out that Ubisoft also have a recommended 4K configuration for Assassin’s Creed Odyssey, which you’ll find listed below, but once again this is targeting 30fps on High quality settings. If you’re after 60fps at 4K, I’ve got you covered.

Click the links below to see how each graphics card fared. For the record, my PC had an Intel Core i5-8600K clocked at 3.6GHz and 16GB of RAM inside it, plus all the latest graphics drivers and Windows 10 updates installed.

As mentioned above, the aim here is to get Assassin’s Creed Odyssey running at 60fps at 1920×1080, 2560×1440 and 4K. The good news is that Odyssey seems to be slightly better optimised for PC than Origins was, as I saw an improvement of around 5fps between both games on each card. As such, if your graphics card struggled a bit with Origins, it should run Odyssey slightly better.

To test each card, I used the game’s built-in benchmarking tool, which sees the camera swooping through one of the game’s many crowded towns while it’s raining. There are plenty of NPCs and bits of environment to tackle, and I found the average frame rate it spits out at the end roughly matches what I experienced in-game as well. 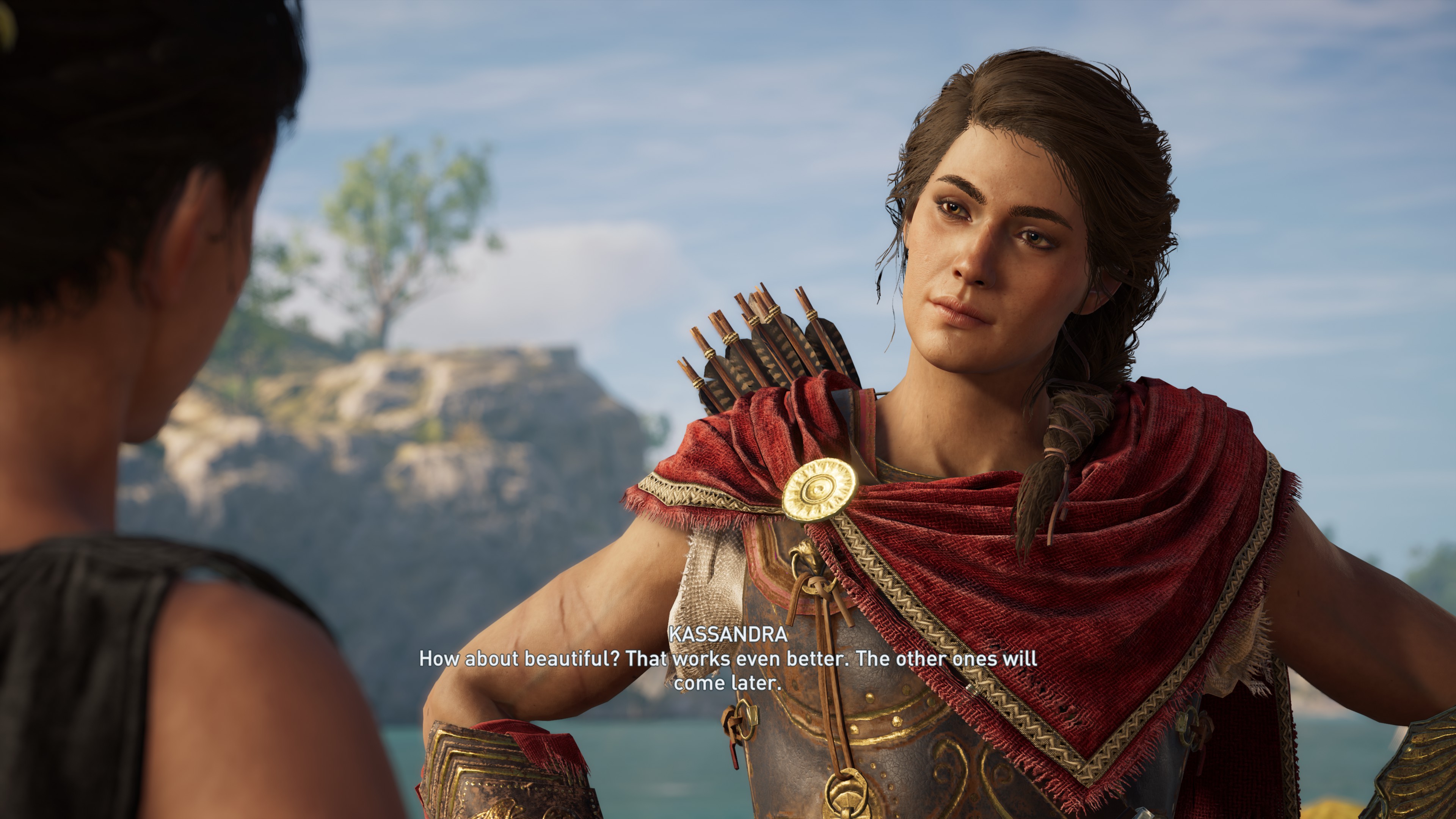 I say roughly, as in a lot of cases, the average frame rate was perhaps a touch higher than the in-game speeds I experienced (the beginning of the benchmark begins inside, for instance, which produced universally higher speeds than the bits taking place outside, potentially skewing the results slightly), but I’ve also made note of how much the game dips below that average to hopefully give a more accurate picture of what you can expect.

Assassin’s Creed Odyssey PC graphics performance: How to get the best settings

I stuck with the game’s preset quality settings during my tests, but there are plenty of options available to help improve your PC’s performance if you’re finding it’s struggling to keep a steady frame rate.

One of the most helpful features is switching on the Adaptive Quality setting. This kicks in when your frame rate drops below either 30fps, 45fps or 60fps (depending on which one you pick) and dynamically adjusts the game’s anti-aliasing (or edge-smoothening tech) to help push the frame rate back up.

I’d also recommend adjusting the game’s Shadows setting too, as this is another one that has a big impact on performance. Helpfully, Ubisoft’s settings menu shows you exactly what each option does in-game via a small picture, so you can see exactly what effect it will have without having to boot up the game first. 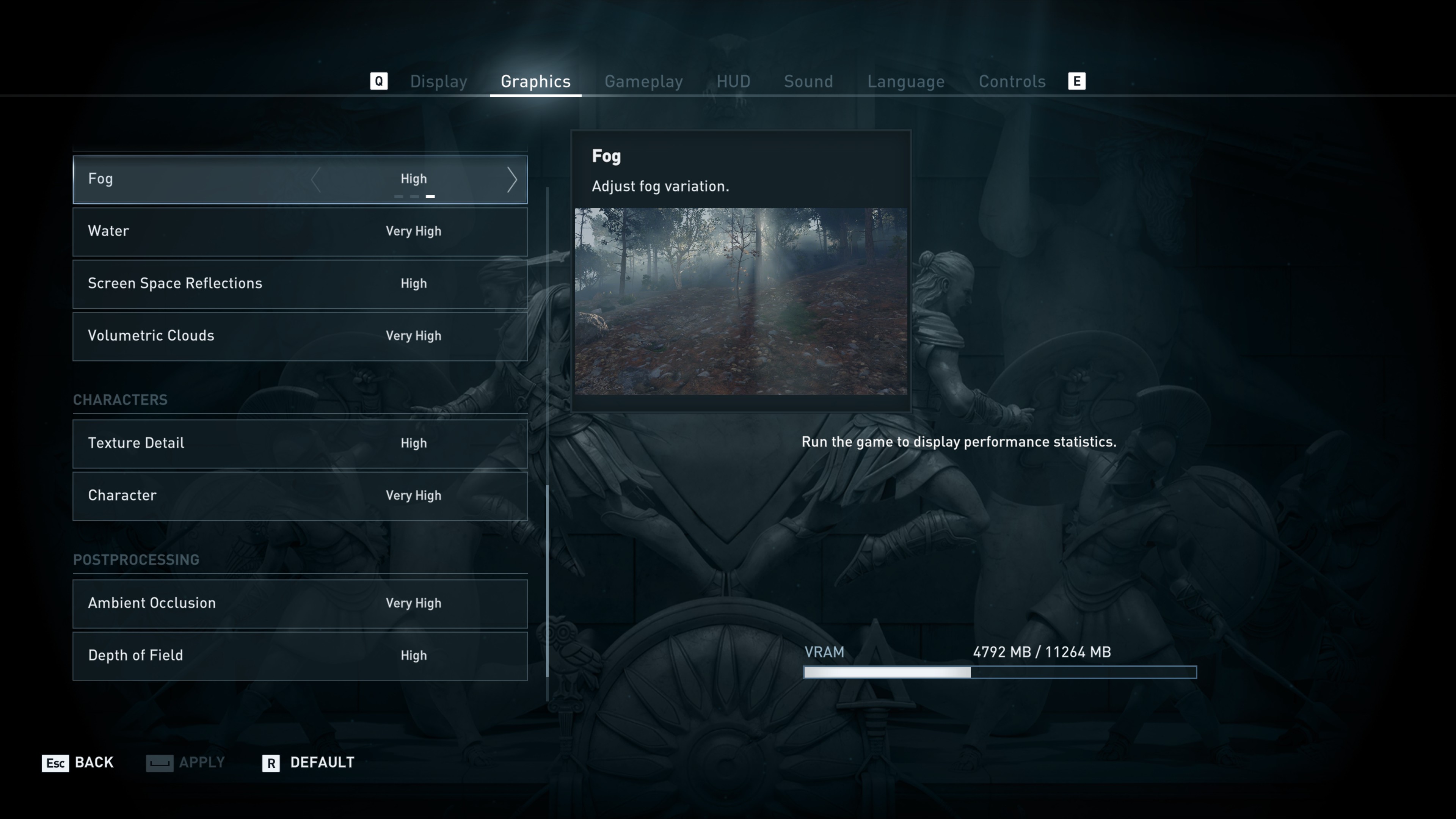 Not only can you see what each effect level looks like, but you’ll also be able to see how much VRAM they’re using as well, allowing you to tailor the settings to your graphics card’s memory limitations.

You can probably get away with cutting back on the Environmental Texture Detail, too, as the difference between Low and High is pretty small. I’d recommend keeping it as high as you can in the Character menu, though, as you’re going to be spending a lot more time scrutinizing the backs of Kassandra and Alexios and their wonderful sets of colourful armour than you are a bunch of walls.

Depth of Field also affects performance, so knock it down to Low or turn it off completely if you’re still finding the game chugs a bit. Turning it off will bring all objects into focus, while low blurs stuff further away, but I don’t think it’s something you’re really going to notice in the grand scheme of things.

It’s also worth noting that you can set an FPS limit in the Display menu as well if you want to keep the frame rate as steady as possible. You’ve got plenty of options, too, as the limit goes from 30fps right up to 90fps in 5fps increments, giving you loads of choice depending on what kind of graphics card you have.

With all that in mind, let’s Sparta-kick our way to some of them there graphics cards. Just click the page numbers below or hop back up the page to the card of your choice. And if you want more tips on how to play the game itself, then head over to Dave’s massive Assassin's Creed Odyssey guide hub.