Fujitsu probably isn’t the first name you think of when it comes to gaming peripherals. Heck, you’ve probably only heard of them if you’re a srs bsns type working at a very corporate tech company, and even then that might be stretching it a bit. But the reason I’m nattering on about Fujitsu today is because they recently helped keyboard switch maker Topre bring their RealForce R2 gaming keyboard to the US (it’s also available in the UK, but only via import). And it’s probably the least gamery gaming keyboard I’ve ever seen.

The Realforce R2 couldn’t be more corporate if it tried. Not that that’s necessarily a bad thing, of course. Its dark grey chassis isn’t the prettiest thing on the planet, but at least its sharp, wedge-like edges are a refreshing change from the metallic strips and flashing lights of other so-called ‘gaming keyboards’. It is available in an RGB version if you so wish, but the version I was sent for review was the regular non-backlit model.

I also rather like that, if you flip the keyboard over, you can see it has three distinct exit points for its USB cable, allowing you to route the cable out of the top, left or right of the chassis depending on what’s practical and convenient. It’s so simple, and yet nothing else I’ve seen even offers this – and it makes you wonder why other keyboards don’t offer the same thing. 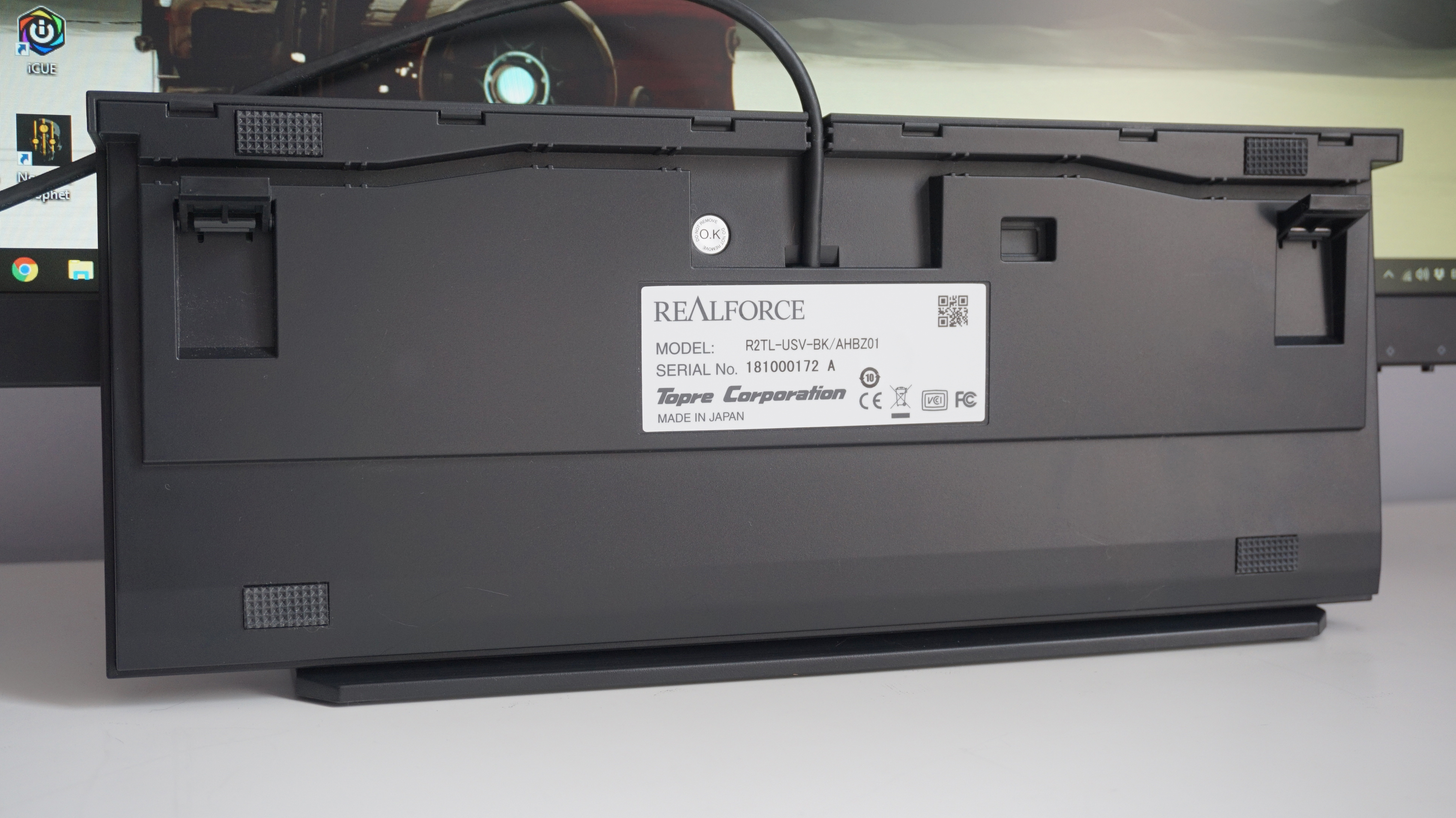 Depending on where your PC’s located, you can have the Realforce R2’s cable coming out of the top, left or right side of the keyboard.

However, I do wish the Realforce R2 had absorbed at least some of the lessons from the school of great gaming keyboards, namely having some damn media keys. I realise I’ve been utterly spoiled by other keyboards in this respect, as the R2 is a completely media free zone. I really missed being able to turn the volume up and down without Alt-Tab-ing out of my game, and it made me yearn for my best gaming keyboard champion, the Fnatic miniStreak, which still manages to cram some media controls into its row of Fn keys despite its tenkeyless form factor.

There aren’t any dedicated macro keys or special gaming mode buttons either (although it does have full N-key rollover by default), and I didn’t realise for absolutely ages that it even had a little LED light telling you the Caps Lock was turned on. That’s because it’s tucked away in the little gap between the Print Screen and Insert key clusters and is completely invisible from a normal typing position. 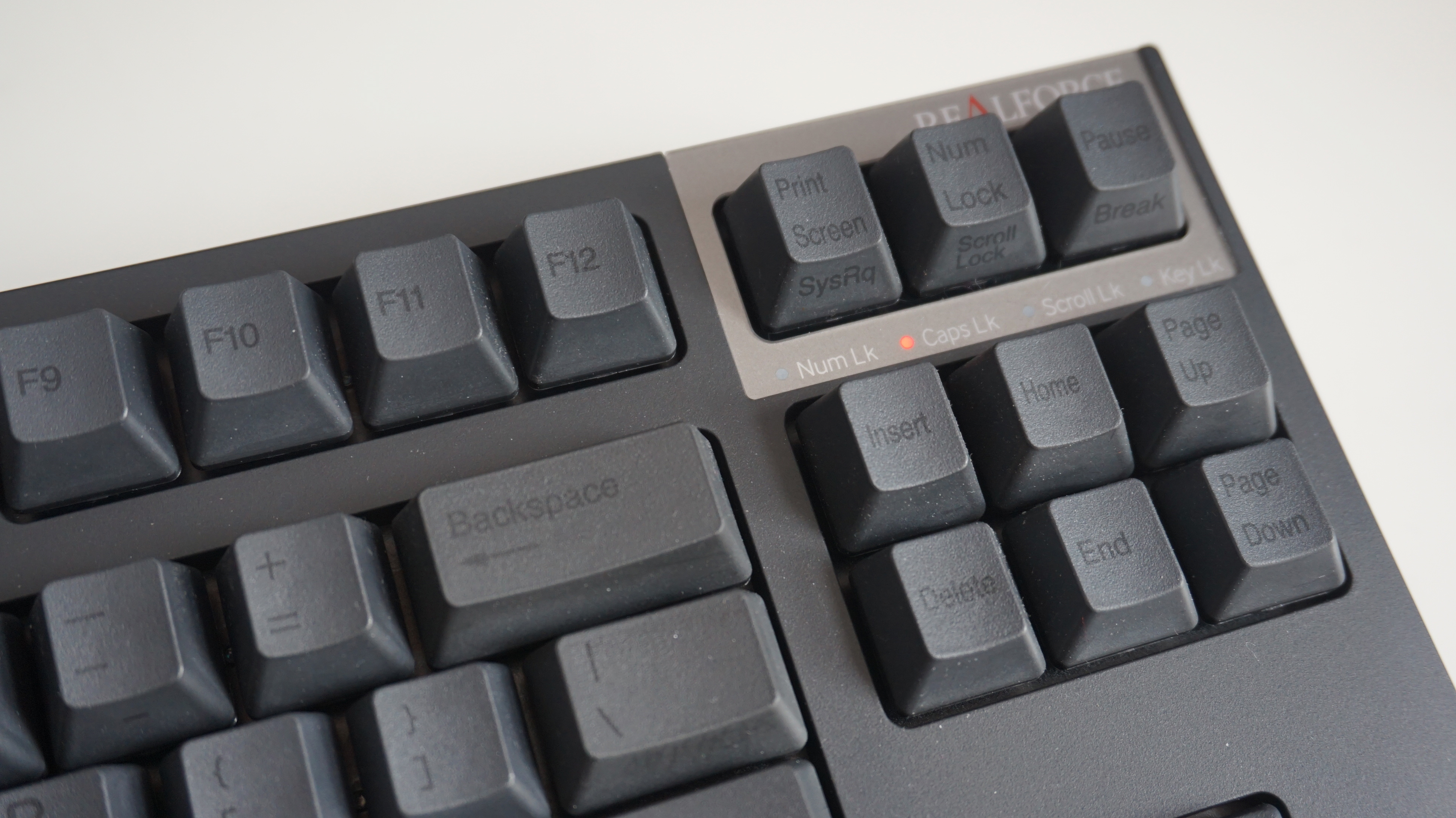 Still, for all the things it’s missing, it really is a very lovely thing to type on despite being totally unlike any other gaming keyboard I’ve seen in the history of the universe. That’s because the Realforce R2 uses capacitive switches, which, unlike a membrane mechanical keyboard, don’t have any contact mechanisms in them whatsoever. Instead, they each have a little capacitor inside them that stores static electricity. When a key gets hit, the conductive pads inside the capacitor get pushed closer together, creating a change in the type of stored charge it has, which allows the keyboard to register it as a press.

In theory, this makes them even more durable than mechanical keyboards, as there aren’t nearly as many parts that could potentially fail. This is difficult to test without extreme long-term use, of course, but one of the R2’s other key attractions is its reduced noise levels. It doesn’t make nearly as much racket as a CLACKY CLACK mechanical keyboard, and the noise it does make is more akin to a membrane keyboard or typing on a laptop. This makes it much better suited to use in communal living spaces, and will likely result in far fewer objects being thrown at your head to make you shut up. 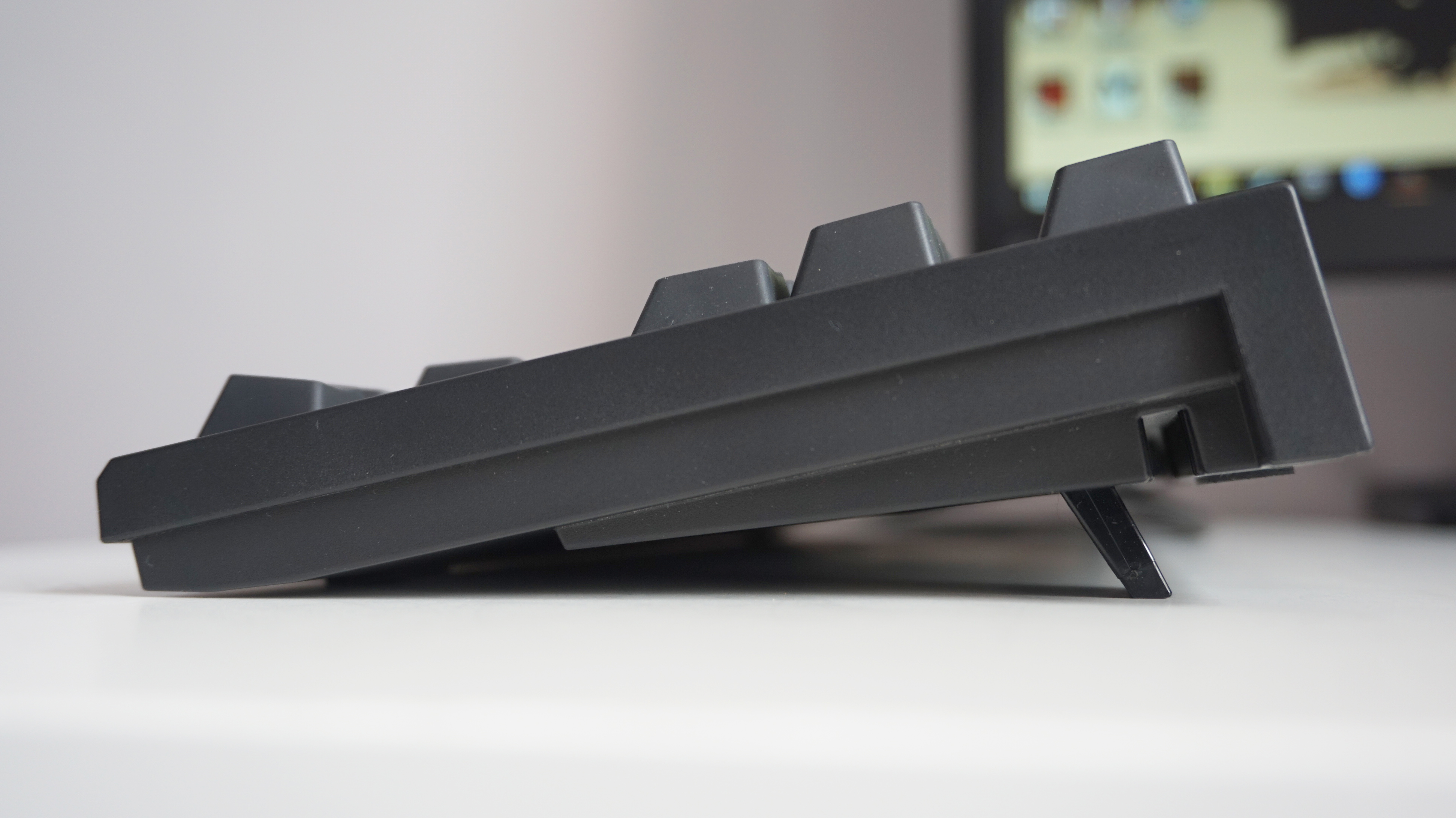 The best thing, though, is that the R2 still feels like a mechanical keyboard when you start typing. There is, I’ll admit, a very mild hint of the old membrane sponge to them, but on the whole I’d say their straight, linear up and down motion is very much in the same vein as Cherry’s MX Red or Speed Silver switches – just without the CLACKY CLACK CLACK.

Indeed, try pressing a single key on the Realforce R2 and you’ll find you barely need to apply any pressure at all in order for it to register, which arguably makes them feel even nippier than their mechanical counterparts. Indeed, I got on perfectly well with them for gaming and general typing alike, and actually preferred using the RealForce R2 to the Cherry MX Speed Silver keyboards I’ve used in the past. 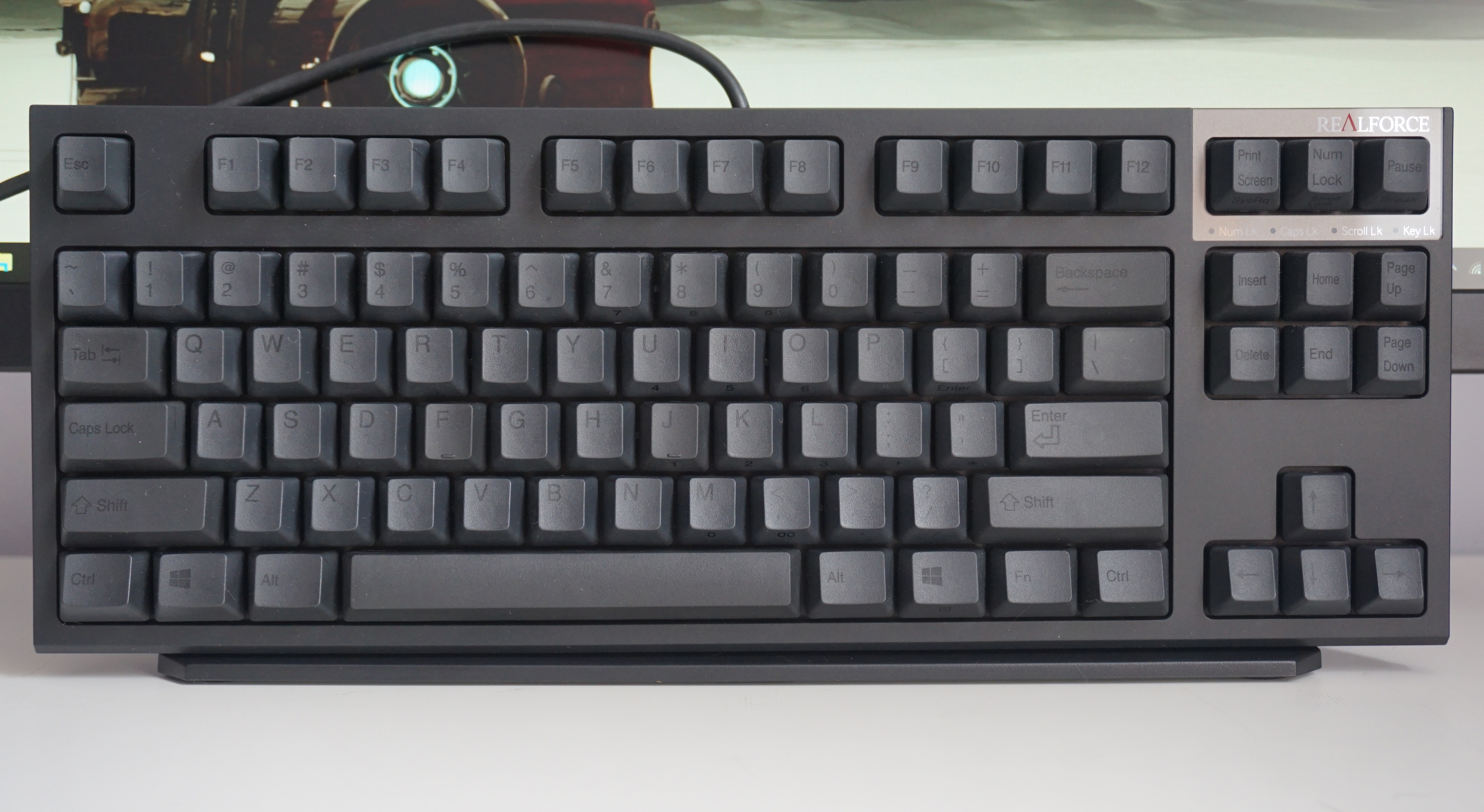 The only main problem, of course, is the price. Despite Fujitsu having helped Topre make a big push into the US with this thing, you’re still looking at forking out a massively $258 for it (or $240 in the UK plus shipping), which is way beyond what I, or probably most people, would be willing to pay for it. Sure, Topre might be the best of the best when it comes to capacitive switches, but when it’s being sold as one of their ‘gaming keyboards‘ and doesn’t even have what I’d consider pretty standard things such as media keys or a Windows Lock button, that’s a pretty big ask.

Plus, if you want the RGB version of the R2 (which does come with Fn-based media keys and other gaming functions, I might add), you’re going to have to stump up $356, which, for me, is just a mad amount of money to spend on a keyboard unless you’ve somehow got coins spilling out of your current one along with all the crumbs and cat hair that’s accumulated there (in which case, why would you ever give it up?). There’s a lot to like about the Realforce R2, but I don’t think it’s $150 / $250 better than the £100 / $90 Fnatic miniStreak.