If you’ve been thinking about upgrading your graphics card recently, you’ve probably been watching Nvidia’s new budget-oriented GTX 16-series pretty closely. Based on Nvidia’s new Turing GPU but without all the expensive RTX gubbins like DLSS support and dedicated ray tracing cores, the £200 / $220 GTX 1660 and £260 / $280 GTX 1660 Ti have both become quite formidable cards over the last couple of months, with the latter occupying multiple spots over in my best graphics card list.

But now there’s a new 16-series card in town: the even cheaper GTX 1650. Priced at just £139 / $149, this GTX 1050 and GTX 1050 Ti successor is a 1080p card through and through, offering 60fps on Medium to High settings in a range of today’s biggest and most demanding games. This won’t be for those after the best speeds on the very top quality settings at this resolution, but if you’re not fussed about having the shiniest polygons and don’t want to spend more than £150 / $150, the GTX 1650 could be what you’ve been waiting for.

I say ‘could‘, as technically there’s already a £140 / $150-ish graphics card that’s able to offer these kinds of speeds at 1080p, if not considerably higher – the 8GB edition of AMD’s Radeon RX 570. I’ve been comparing both cards very closely for this review, and if you’re simply after the fastest speeds for the least amount of money, the 8GB RX 570 has the GTX 1650 pretty much beat on all fronts.

In some ways, this isn’t surprising, especially when the GTX 1650 only has half the amount of memory on hand. With just 4GB of GDDR5 memory as opposed to 8GB of the stuff, this means the GTX 1650 isn’t as well-equipped to deal with some of today’s highest quality texture settings as its AMD rival. Indeed, I actually got a warning in Monster Hunter: World saying it didn’t have enough memory to handle its Highest setting at 1080p, and it showed in my benchmarking results. 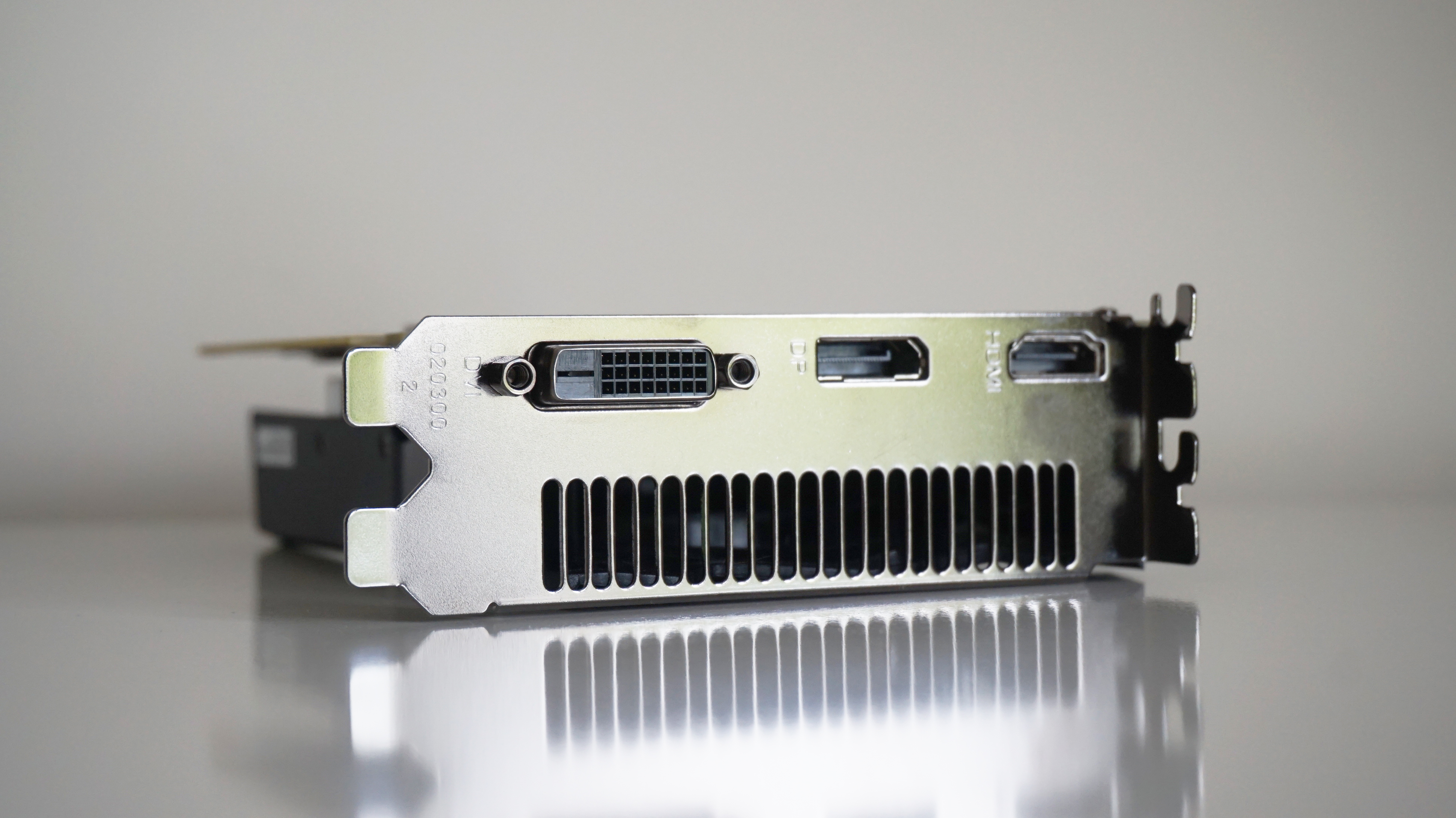 Zotac’s OC edition of the GTX 1650 only has single DVI, DisplayPort and HDMI inputs.

That said, the GTX 1650 is also arguably a different kind of proposition to the RX 570. For starters, it doesn’t require any additional power from your PSU. Instead, it draws everything it needs direct from your motherboard – topping out at just 75W. This makes it much more suitable for smaller PC builds, as well as those looking to keep costs down as much as possible. After all, if you don’t need a honking great PSU to power your graphics card, you can get away with a cheaper 300W model.

The RX 570, on the other hand, does need to be connected to your PSU, and is more power hungry as a result, with AMD claiming its typical desktop requirements lying somewhere in the 150W region. They also recommend you should pair it with a 450W PSU as an absolute minimum. Sure, there are only a couple of tenners difference between a 300W and 450W PSU these days, but for those after the cheapest build possible, every little helps.

As I mentioned earlier, though, the RX 570 sure does look like better value on a purely performance front, and I reckon that whatever extra you might end up spending on a PSU and such like will be more than worth the gains you’ll see in the old frame rate department. You can see more details about how Zotac’s GTX 1650 OC and the 8GB PowerColor Radeon RX 570 Red Dragon card I finally managed to track down for this review stack up in my GTX 1650 vx RX 570 article (both at 1920×1080 and 2560×1440), but for now I’m just going to focus on my 1080p results.

Indeed, the only game where the GTX 1650 actually posted better frame rates than the RX 570 was in 2016’s Doom. Whereas the RX 570 noodled around the 77-109fps region on Ultra quality at 1920×1080, the GTX 1650 was racing ahead with speeds of 90-120fps. That will mean absolutely nothing if you don’t have a high refresh rate monitor, of course, but if you do have one or are looking to get one for less demanding competitive games such as your Fortnites and your Apelegs, the GTX 1650 will probably be able to make better use of those extra frames than the RX 570. 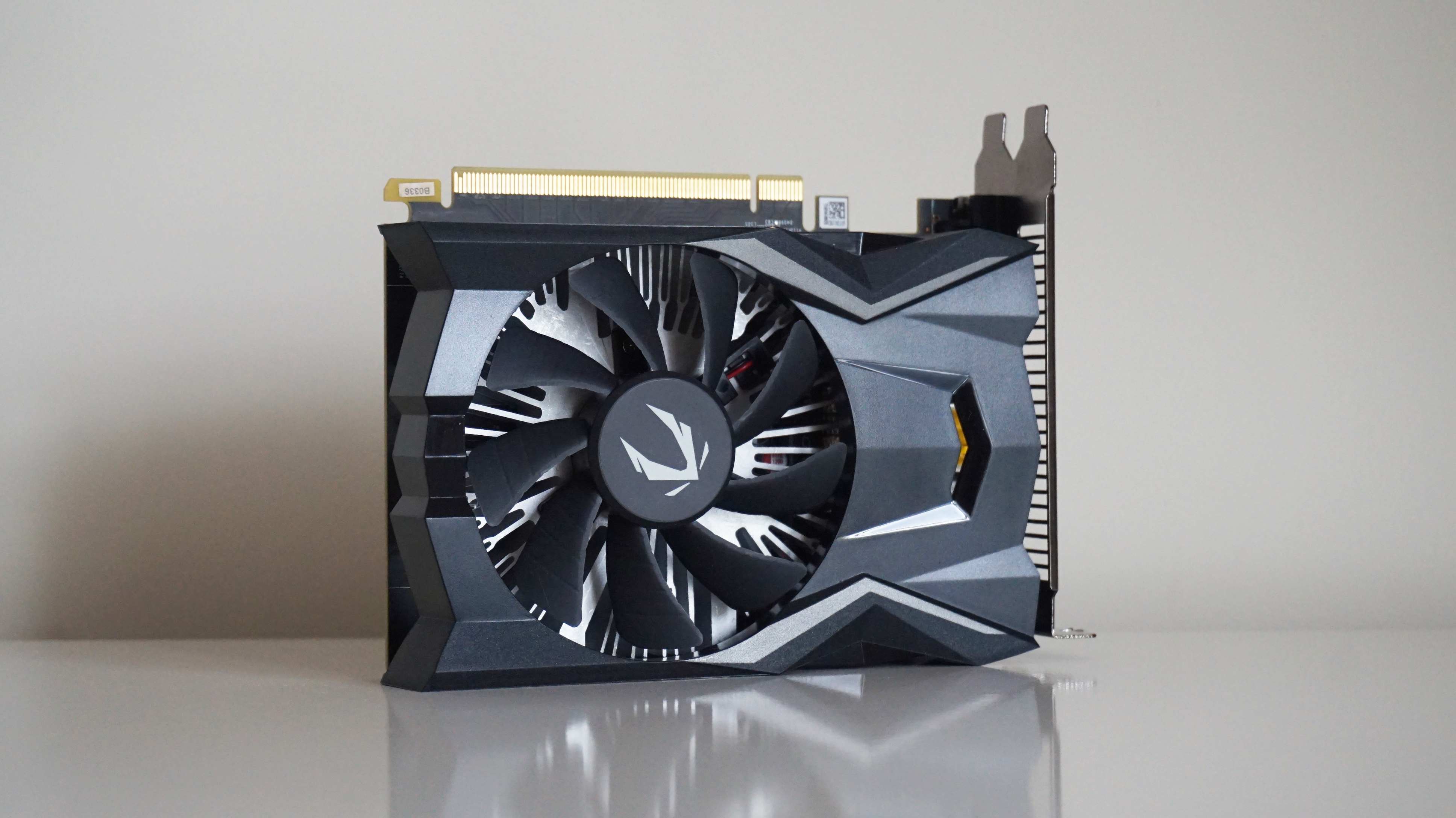 The GTX 1650 also put up a good fight in a couple of other games, too, matching the speeds of the RX 570 almost frame for frame in both Assassin’s Creed Odyssey and Total War: Warhammer II. In the former, both cards hit averages of 64fps on Medium quality, and 54fps on High, while the latter saw each of them manage an average of 50fps on High in Total War’s battle scene benchmark. The RX 570 clawed back a bit of a lead when I dropped the quality down to Medium, where it averaged 67fps over the GTX’s 62fps average, but you’re unlikely to notice the difference here unless you’ve got a high refresh rate monitor.

Elsewhere, however, it was a clear win for AMD. In Shadow of the Tomb Raider, for example, the RX 570 produced a breezy 60-69fps on High with SMAA anti-aliasing enabled at 1920×1080 in the bustling town square of Cozumel’s Day of the Dead festival, but the GTX 1650 only managed 50-60fps. Dropping it down a setting didn’t improve things either, as Shadow of the Tomb Raider’s Medium preset is, for some reason, just as taxing as High, with both cards producing nigh-on identical frame rates to what they did before.

A similar gap was present in The Witcher III as well. Whereas the RX 570 managed a smooth average of 57fps on Ultra settings as I rode about the forests of White Orchard, the GTX 1650 only managed to catch up to that kind of speed when I lowered the settings to High, coming in with an average of 54fps compared to its Ultra-fied average of 41fps. 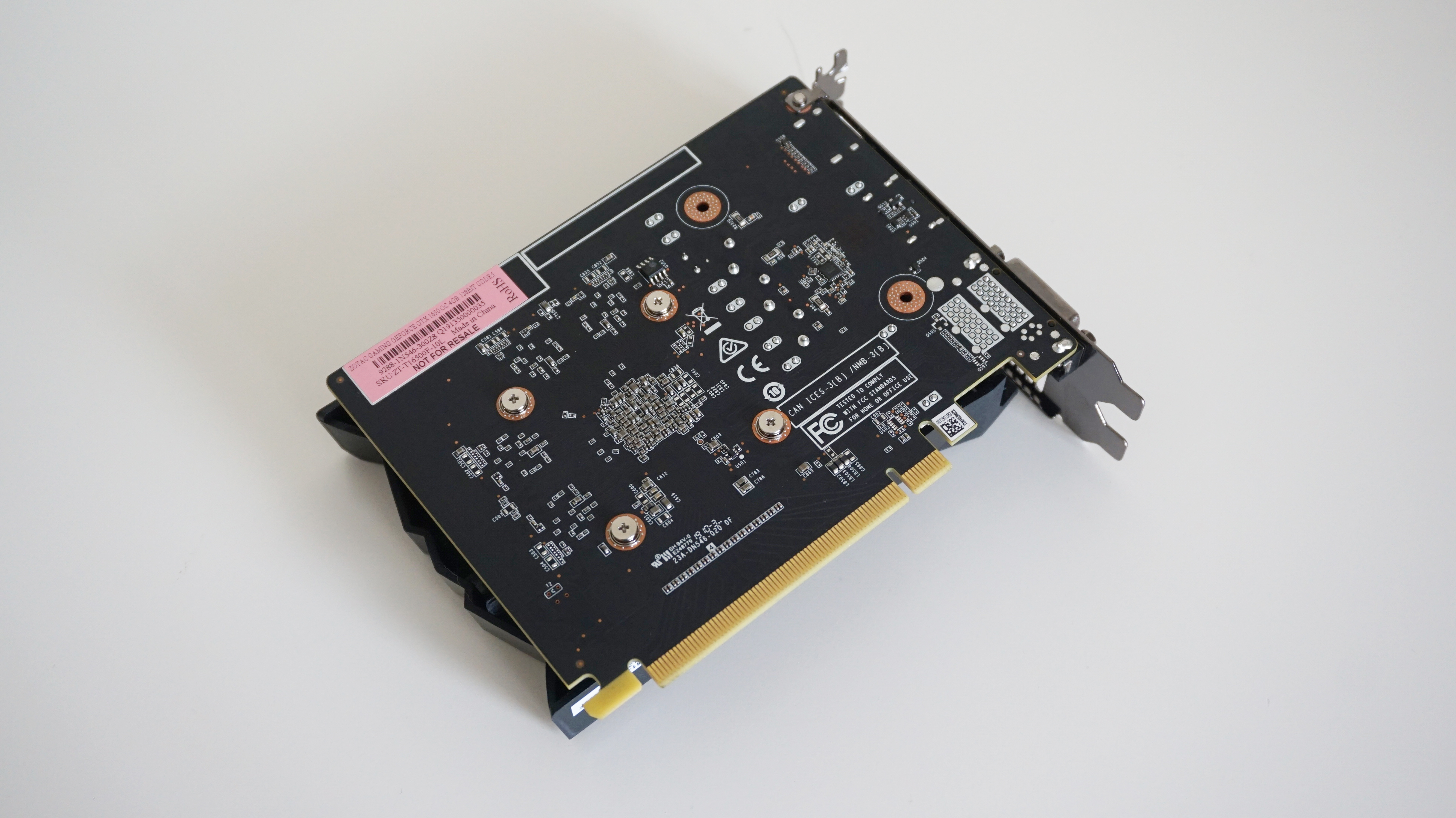 Even Final Fantasy XV, which is normally the jewel in Nvidia’s crown, came out in favour of the RX 570 here – which is pretty good going considering how poorly AMD cards have coped with this game in the past. Indeed, while both cards are most comfortable on the Average setting at 1080p, the RX 570 managed a much smoother 52-60fps as Noctis and pals trundled up and down the hills of Duscae compared to the GTX 1650’s 43-48fps.

It was a much closer race once I’d turned on TurfEffects and HairWorks, mind, with both cards settling around the 30-40fps region when playing on Average, but I’d wager that most people would prefer the near-60fps levels of performance available on the RX 570 than getting bogged down in special effects.

The RX 570 was also able to weather the demands of Metro Exodus much better as well, averaging 57fps on Normal in its tough benchmark tool compared to the GTX 1650’s noticeably choppier 40fps average on the same quality setting. 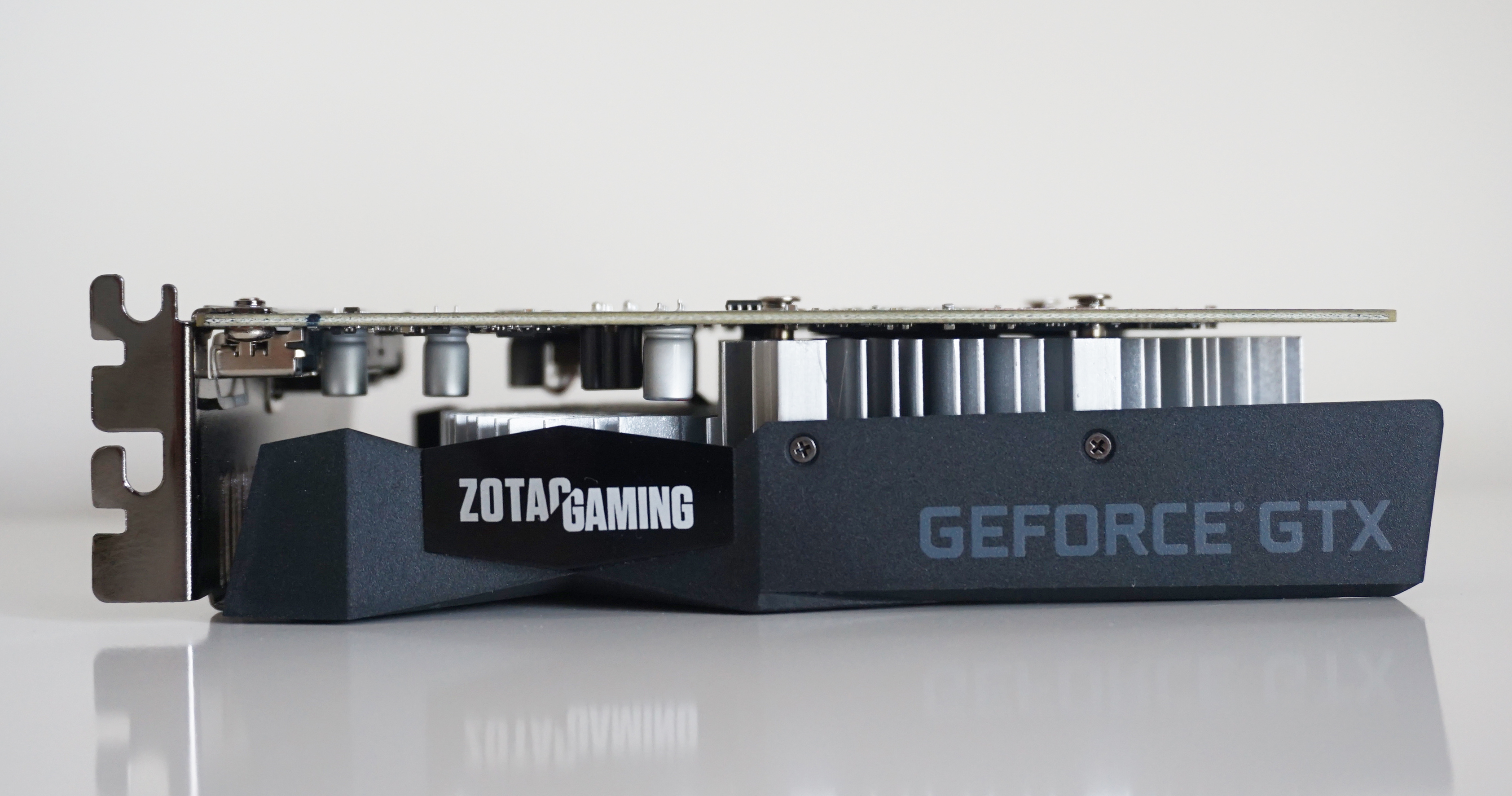 I should also note that the GTX 1650 doesn’t give you the benefit of trying out Nvidia’s cut-down ray tracing options, either, as (much like the GTX 1050 and GTX 1050 Ti before it) it doesn’t fulfil Nvidia’s memory requirements to work with their recent driver update. Not that you’re missing out on much, mind – as we saw in my Nvidia GTX ray tracing tested article, Metro Exodus was a complete horror show for both the 6GB GTX 1060 and GTX 1070, and it was only in Shadow of the Tomb Raider that I managed to get some vaguely playable speeds in.

There’s still plenty to like about the GTX 1650 apart from its lack of ray tracing support, of course, but in terms of overall value for money, I’m going to have to side with the RX 570 in this case, particularly when the PowerColor Red Dragon model I used to get these results with only costs another fiver (£145) for those buying in the UK. It was just as quiet as Zotac’s GTX 1650, too, which is as surprising to me as it probably is to you, what with PowerColor’s RX 580 Red Dragon card being one of the loudest and whirriest GPUs in my current testing stable. Instead, their RX 570 was as quiet as a mouse, even when I was pushing it at 1440p, making it all the more tempting for those on a budget. 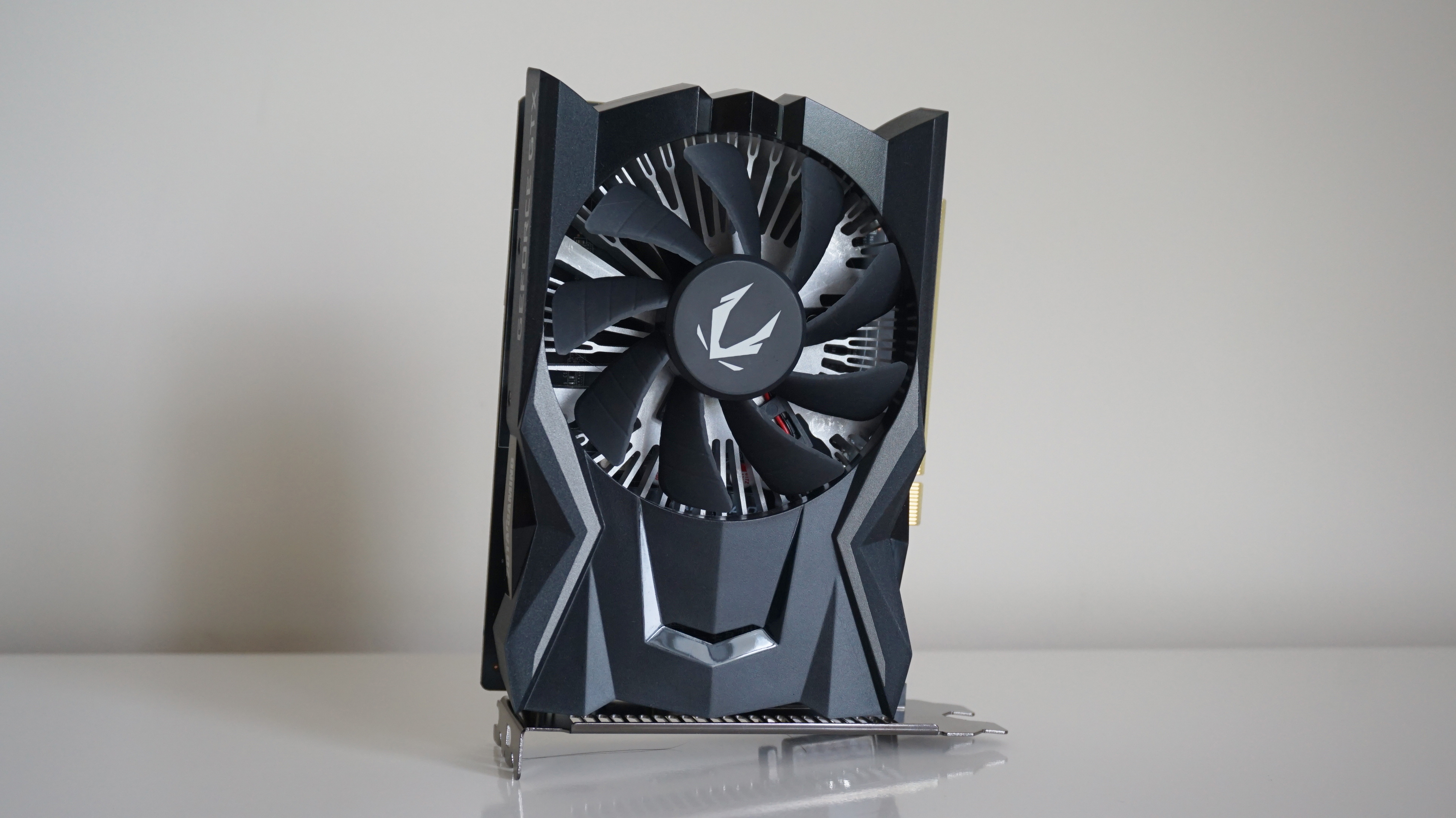 So, before we start going too far down the ‘just a bit more’ rabbit hole, I’ll simply say this. If your budget simply won’t go higher than £150 / $150, then the RX 570 is definitely the card that should be at the top of your list. If you can afford to spend a bit more, just stick with the single ‘just a bit more’ upgrade to the RX 580. It’s still one of my top best graphics card recommendations for 1080p, after all, and you’ll also nab yourself a free copy of The Division 2 and World War Z as part of AMD’s 50th anniversary celebrations deal, too, making it even better value than Nvidia’s more expensive GTX 1660.