When Corsair announced their new Harpoon RGB Wireless gaming mouse would cost just £49 / $50 back in January earlier this year, I thought there must be some kind of catch. A wireless gaming mouse for a mere $50? You must be having a laugh. Now, I know I haven’t reviewed that many wireless gaming mice so far, but the two I have looked at, namely the Logitech G Pro Wireless, and Razer’s Mamba + FireFly Hyperflux combo, will both set you back at least a hundred quid, if not significantly more. Is Corsair’s new cordless competitor really all it’s cracked up to be? Here’s wot I think.

Based on the regular version of Corsair’s Harpoon RGB mouse, the new wireless model looks more or less exactly the same as its wired sibling. It’s got the same rubbery textured grip on either side of the mouse, plus an identical pair of programmable buttons along the right-handed sculpted thumb groove as well as a central DPI button. The only difference is that the latter button now has a little RGB LED along the top of it to help you identify which of its five DPI / sensitivity settings you currently have enabled. Otherwise, it’s pretty much identical.

The main difference (apart from the fact it’s wireless) is its new PMW3325 sensor, which bumps the original Harpoon’s maximum speed of 6000 DPI all the way up to 10,000. You’re probably never going to need that extra 4000 DPI in all honesty – not unless you’ve got bionic eyes that can somehow detect subatomic-level movements across the screen – but it never hurts to have the extra bit of flexibility. 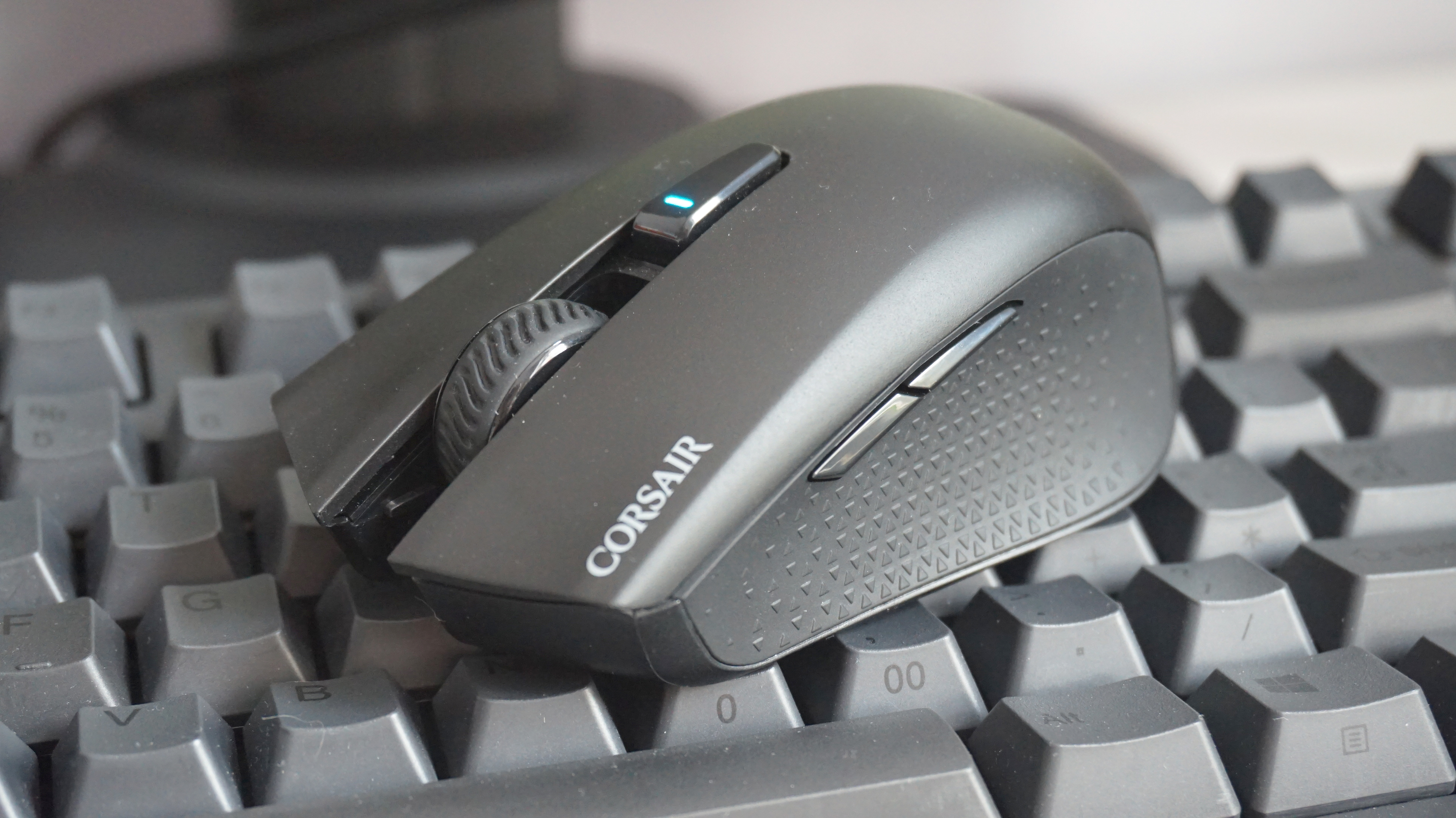 It’s also a fraction heavier than the old Harpoon, now weighing 99g as opposed to 85g. It still feels plenty light enough to move around comfortably, though, and at no point did I feel like it was a chore to swish it left and right while I was playing games. I suspect that’s because it’s a bit short and stubbier than other gaming mice I’ve been using recently, so it doesn’t feel like such a wodge under the palm. Corsair actually say it’s more of a ‘claw-grip’ style mouse as opposed to a palm or fingertip-style mouse, but I got on perfectly fine with it no matter what position I happened to have my fingers in at the time.

The main appeal, of course, is the fact it has both 2.4GHz wireless support and low-latency Bluetooth thanks to Corsair’s new Slipstream tech. With a claimed range of up to 65ft and apparently twice the speed of Corsair’s last gen wireless standard, Slipstream makes a compelling elevator pitch, especially since Corsair say it’s also able to constantly search for the best frequency via its new Intelligent Frequency Shift feature (or IFS) to help keep your wireless connection nice and stable.

Now I’ve got all manner of wireless devices at home, and in practice I have to say it held up incredibly well. During daily use, I couldn’t detect any difference whatsoever compared to Logitech’s G Pro Wireless mouse, and it felt equally responsive when playing games, too – which is no mean feat considering its significantly lower price. The only minor bugbear I had during testing was that it sometimes took the Harpoon RGB Wireless a beat to wake up after I’d stopped using it for a while, which I’ve never had to worry about with the Logitech. Still, it’s a very small complaint in the grand scheme of things, and something I’m more than happy to put up with given it’s so much cheaper. 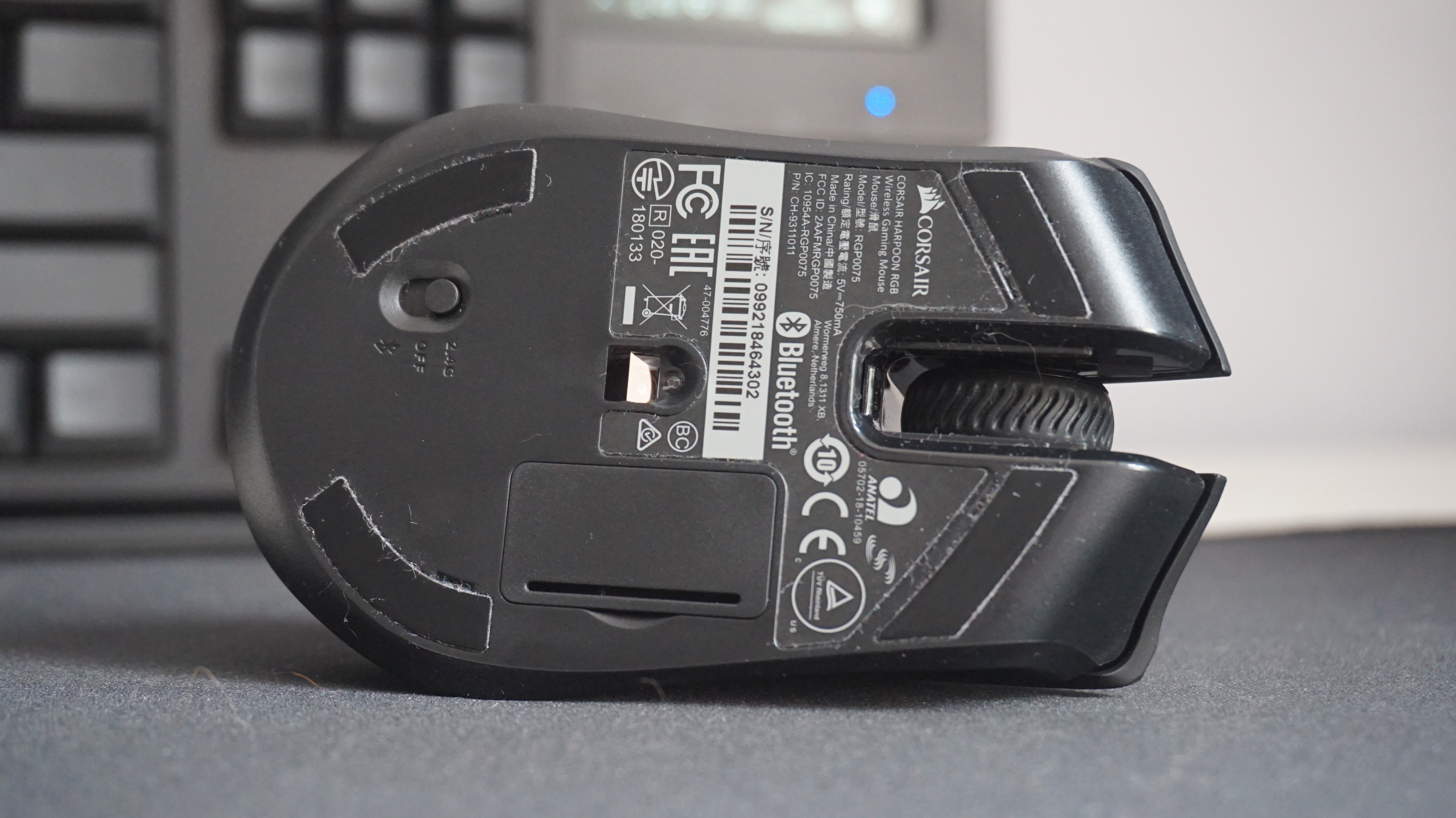 Turn the mouse over and you can switch between its 2.4GHz wireless and Bluetooth modes via the little switch on the belly of the mouse, as well as open up the small plastic flap to store its Slipstream USB dongle.

Another area where the Logitech has the Corsair beat is battery life. While both can manage a maximum of 60 hours with their respective RGB zones switched off, the Harpoon RGB Wireless is only able to achieve this kind of stamina over Bluetooth. Over 2.4GHz wireless, it tops out at 45 hours, which is a long way off the Logitech’s 60. It’s a similar story when you leave each mouse on their default RGB lighting as well. While the Logitech can muster a decent 48 hours on its standard lighting profile, the Harpoon RGB Wireless can only manage 30 hours over wireless and 40 hours over Bluetooth.

Again, it’s not really that bad considering the Logitech is so much more expensive, but I’ll admit to grumbling a bit when I kept having to charge the Corsair up so often. While I’m almost certain the Logitech’s battery life isn’t really worth the extra £80 / $86 you end up paying for it, its ability to go that extra day or two sure really makes all the difference when it comes to ease of use and my overall perception of it.

Still, as I said earlier, the Harpoon RGB Wireless is really quite the steal at £49 / $50 and to complain too much would simply be churlish. Its quick and nippy Slipstream wireless technology is properly brilliant for such a comparatively cheap mouse, and apart from the differences in battery life I’d say it’s easily the equal of Logitech’s considerably more expensive G Pro Wireless.

Throw in a total of six programmable buttons that can be used for anything from recordable macros and media controls to specific keyboard commands and DPI Sniper functions (the latter of which can send your DPI speed plummeting down to a minimum of 200 DPI for lining up those all-important headshots in games), and the Corsair Harpoon RGB Wireless is my recommendation for buyers looking for a budget mouse.