Last time on Wastes of Space: Alice, Matt and Nate were sent into the black with no training; three chumps signed on as “bronze level” colonists with Royal Planetary Services, and commissioned to find riches at the wild edge of space. After making landfall on an unnamed world, they found themselves separated, but in radio contact with the enigmatic robot ODD. Despite helpful instructions from their new friend, they were repeatedly savaged by wolves, and turned into smears of red on the mountains by jetpack accidents. As night fell, things were looking bleak.

Just got this email from Brent at Royal Planetary Services: 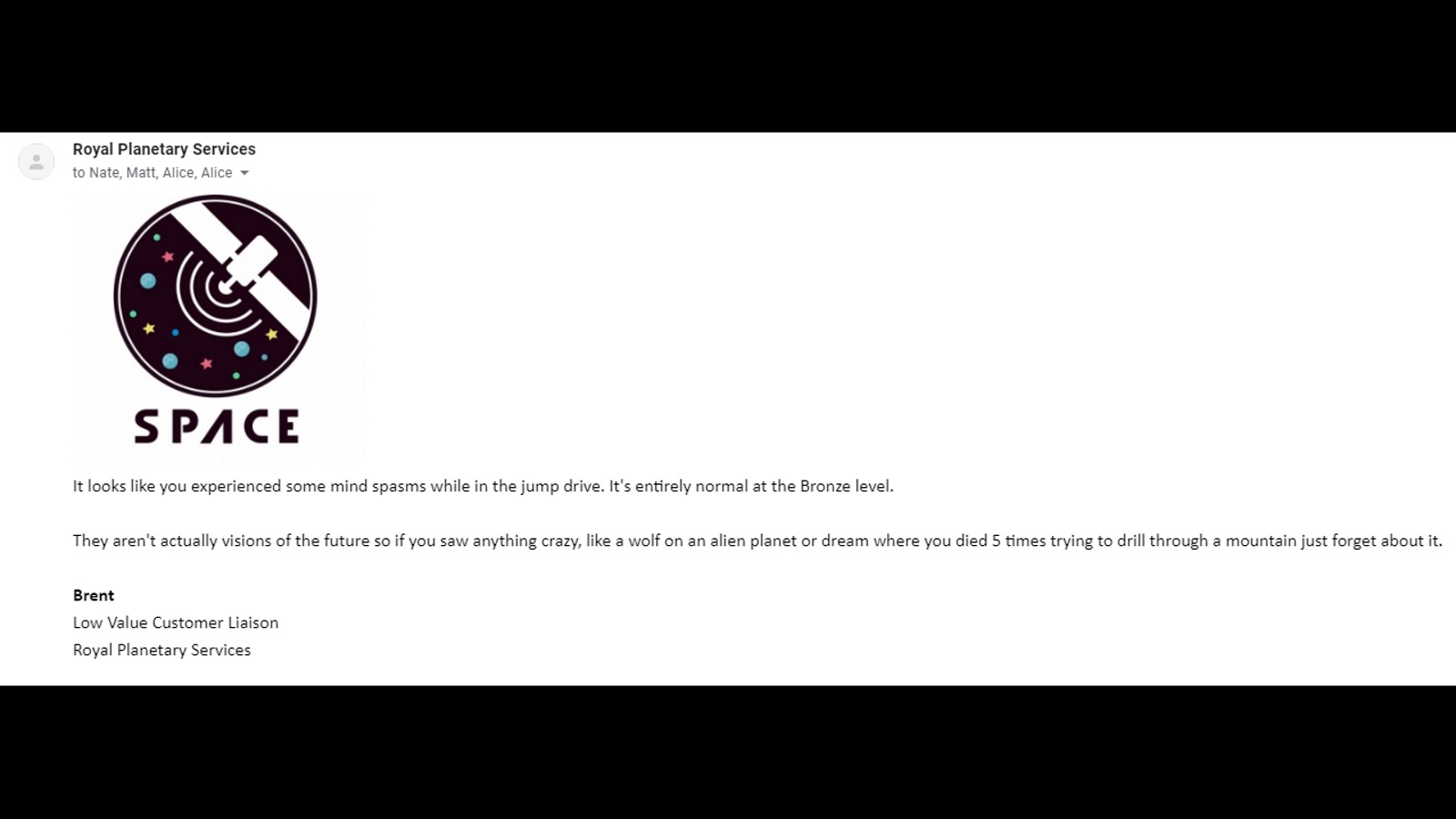 Huh, turns out all that shit with the wolves and the jet packs and the getting trapped in mountainsides was all just a grim jump-space hallucination. I’d say it was a relief, but I’m still trapped on this bloody alien hillside, with just the pod I dropped in, and the word of some eerie robot that rescue’s on its way. Forgive me if I’m still pessimistic.

Darkness on an alien planet is very dark. The lights on my survival pod are a little island of safety in an ocean of danger. And possible wolves. Despite ODD’s assertion that the wolves are gone, I am still wary, because watching a pack of them savage your own corpse from the roof of a drop pod is the sort of acid flashback that you can’t bowl through in a hurry. 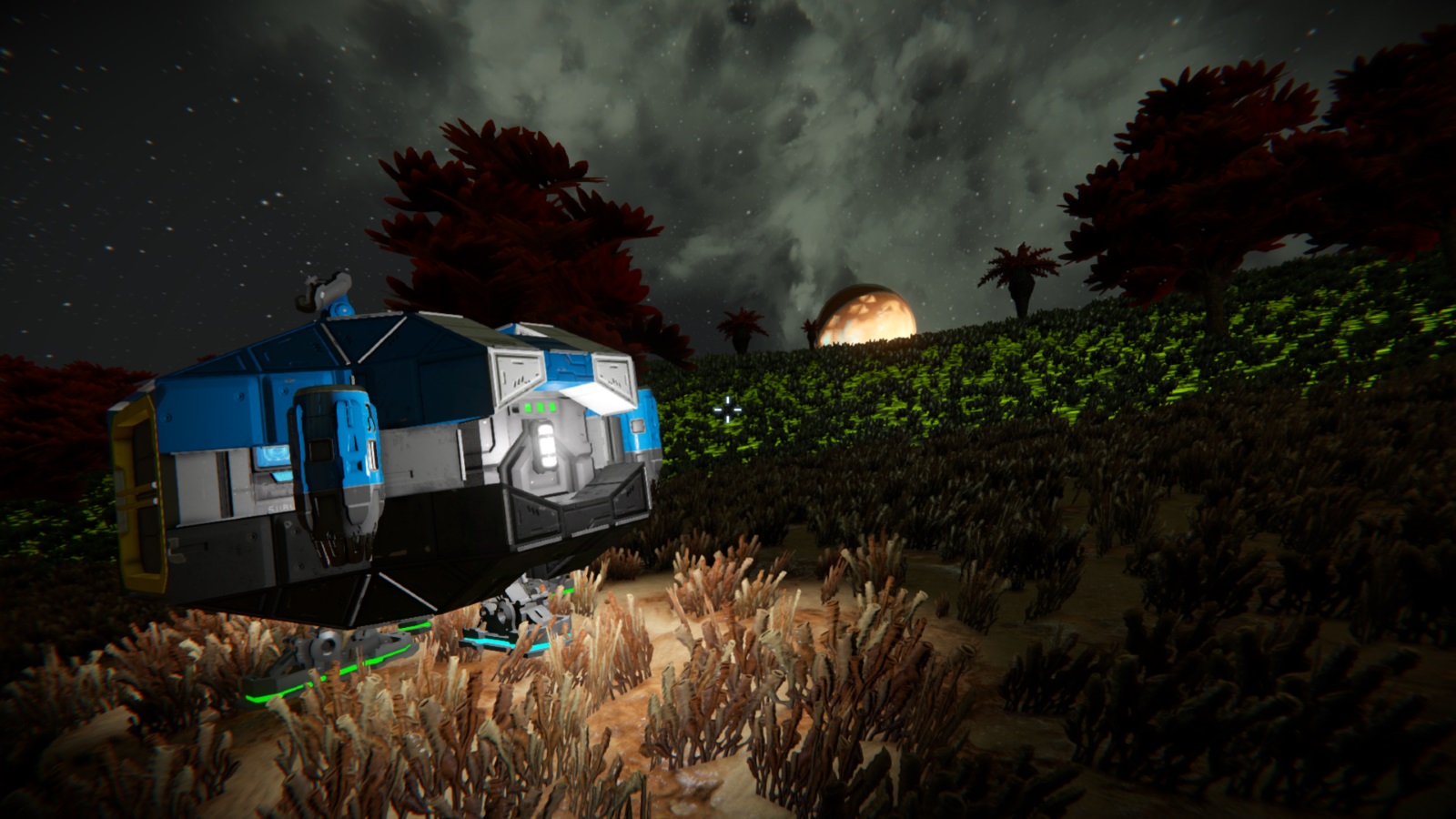 But then who should come on the radio but ODD himself. Apparently he’s two klickies away (klickies are like klicks but in space), and closing fast.

“Can you see me, Commander?”

I can’t see a damned thing – until I look up. And there it is: a light show in the sky, arranged in the shape of a giant, unwieldy bird. I yell with excitement that I can indeed see ODD, and then after a moment I realise I can hear him too. For indeed, a familiar song – an anthem, some call it – is blasting from the undercarriage of ODD’s aircraft:

The good ship Vengabus is bright pink and yellow, and has a rudimentary disco ball. It is indeed a sight. I would go so far as to say a welcome one. 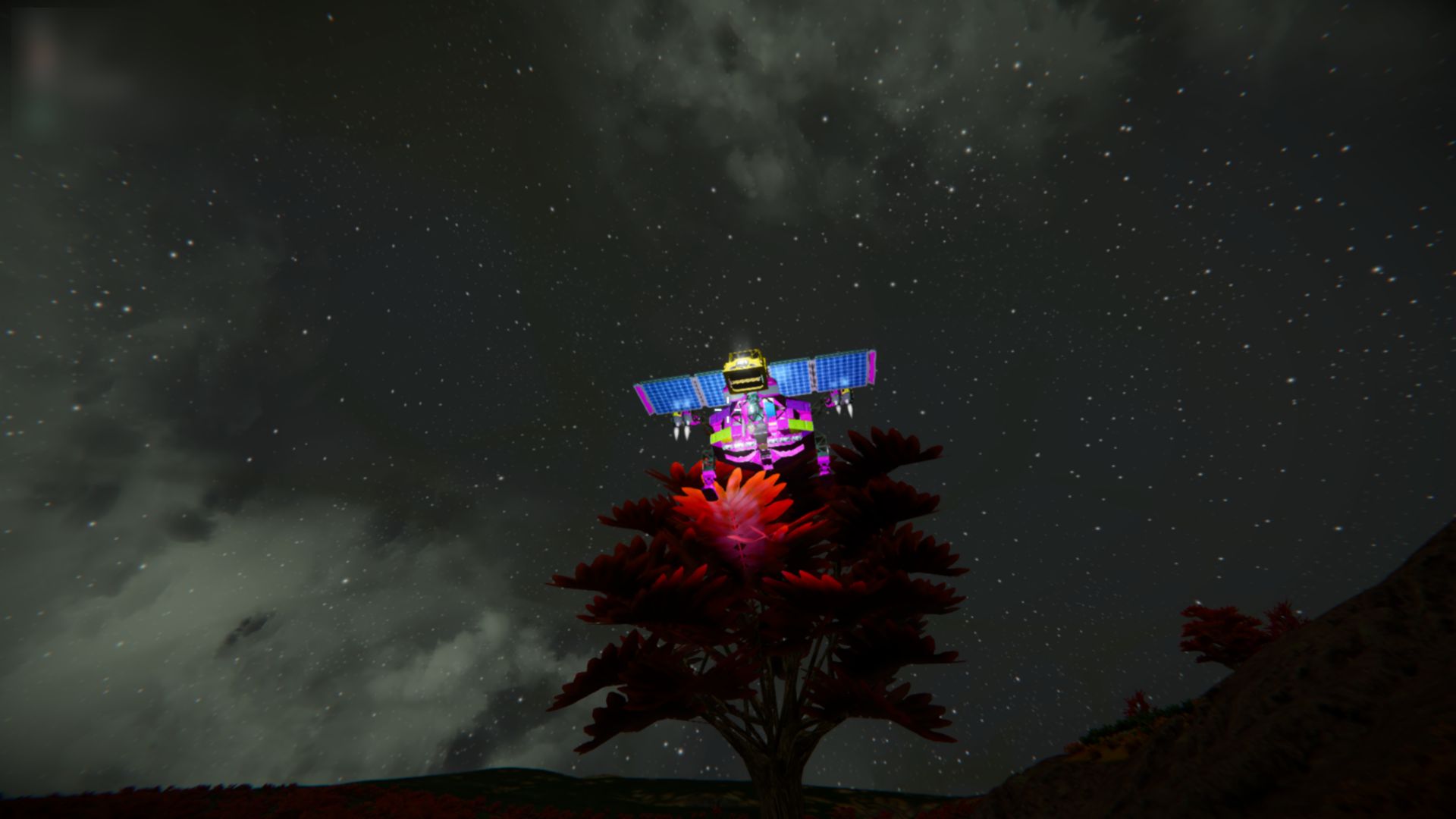 The Vengabus descends from heaven

ODD talks me through using my grinder and welder to take the thruster engines off my survival pod and bolt them onto the Vengabus. The pod is then clamped onto the Bus and, with enough lift from the new engines, ODD is able to take off, with me in a sort of toddler booster seat on the side.

I’m investigating the perimeter of my drop site when I hear a great commotion over the radio – something about a Vengabus? It all sounds like a load of rubbish to me, but then, after a few minutes, I hear the whining of engines from the East. I turn round, and my mouth falls open in shock. There’s that bloody robot, and he’s built a sort of massive disco flamingo, with Commander Bee’s drop pod in its talons. 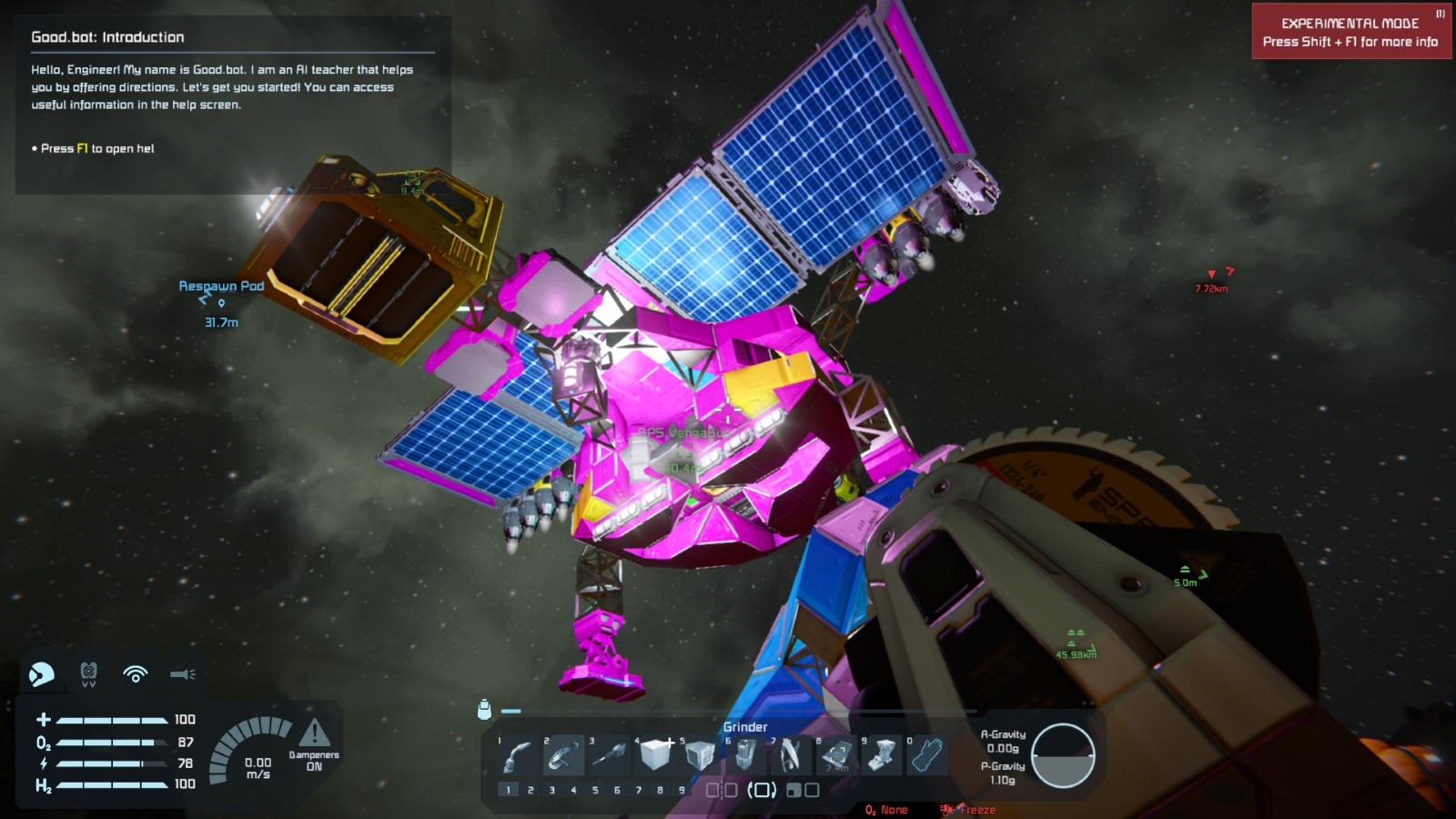 United at last, I gift my commander with the steel I’ve been cooking up during the long night’s wait, and she lays the first ceremonial foundation block of our new colony: the Treehouse. The plan, she explains, is for us to build up a temporary base here, from the hulls of our two drop pods, while ODD flies the Vengabus off to rescue Science Officer Cox. Saluting the unusual robot, we see him off, and get to work on building an Assembler to make more complex materials. 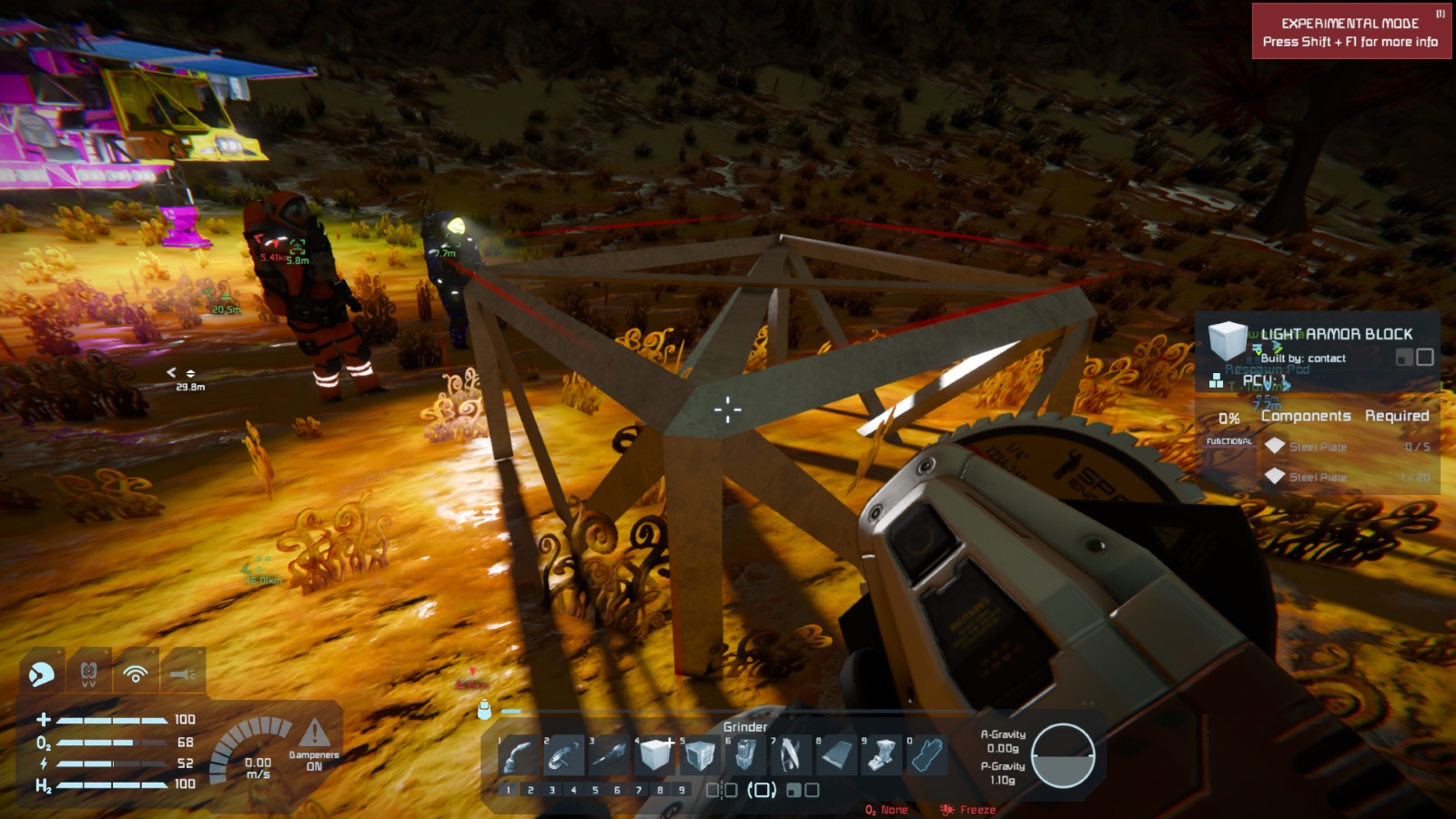 The first block of the Treehouse is laid by Commander Bee

Left to my own (scientific) devices, I’ve been mining more iron. I talk a lot about all the iron I’m mining, which I think my colleagues start to grow tired with. But then I think hey, they’re off having an exciting Assembler party without me and they should damn well be grateful for all this back-breaking labour I’m massively overqualified for. They are not.

It’s ok though, because then the Vengabus cometh, and somehow its arrival is even more glorious than I’d imagined. It’s nice to have company after my many lonesome space hours (maybe 20 Earth minutes) in this mine. Even if said company is a robot I’m becoming increasingly concerned about.

It soon becomes apparent we’ll have to work together, however, as a snag has come up in the rescue plan. The previous flights have worn the poor Vengabus out, and I’m told we need to come up with a new power solution. After much fruitless faffing over hydrogen engines, ODD asks Commander Bee if we should wait or risk the journey anyway. She tells us to fly back right away, because of course she does.

Back at the Treehouse, Security and I are further establishing the low-stakes comedy b-plot of the episode. ODD left us with homework: building an assembler thing to more efficiently process raw materials, and a wind turbine to power it. We build the space-windmill’s tower six blocks high, and start constructing all the materials we need. It’s a lot of steel plate, so we have a lot of mining ahead of us. Science has been going on about how successful his own mining operations are, but that’s rack all use to us back here, so I order Security Officer Crowley to begin a massive hole. 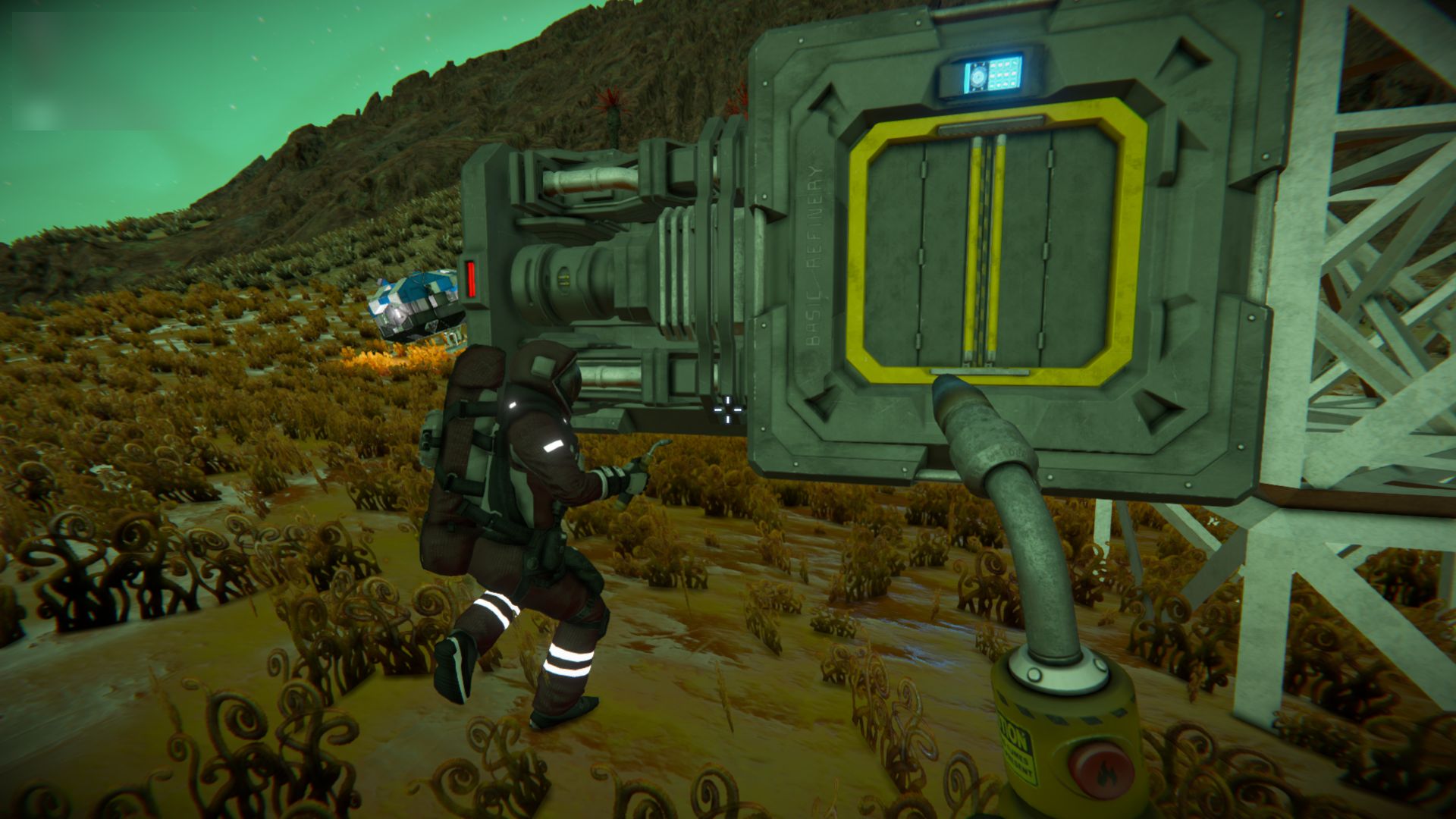 This is the Assembler. Or the Forge. Can’t remember. It’s a big box that makes stuff, and we’re really proud of it. Here we are at dawn, just getting it working.

Somewhat optimistically, we take to the skies. Moments later, ODD cheerfully informs me we have about six seconds worth of fuel, after which we are rudely and catastrophically reintroduced to the ground. I sadly fail to capture any footage of the incident, due to having thrown my hands off the recording device in genuine terror.

We land uninjured, in the end, but the Vengabus manages to jam itself firmly into the ground. We’re going to have to use our jetpacks.

Commander’s told me to do a hole, so I do a hole, don’t I? It’s great fun. As the sun rises, I drill away at the mountainside like I’m in a Rammstein video, sometimes stopping to gather the rocks as they try to roll away. But more are getting away than I manage to catch: it’s inefficient. Then I have a thought truly worthy of a Space Engineer, and build what I like to call a “rock collector” – a big steel wall jutting out from one side of the treehouse, to collect all the rocks as they roll down the hill. The Commander and I toast the rock collector magnificently, even if it took many rocks’ worth of steel to build.

“Dampeners on”, says the robot. I’m to fly straight up until I’m travelling at 100m/s, disable the jetpack’s inertial dampeners, then gently throttle forwards for 22km without slamming into a mountain. I do my best to forget the vivid hallucinations of all those times I tried to do exactly this, and died horribly.

The robot makes me throw my tools to the ground, to minimize weight and maximise fuel efficiency. My hard-mined iron follows, torn from my hands by synthetic indifference.

I am audibly nervous. My colleagues do not provide the emotional support I feel I am due. We take off.

And… I fucking nail it! Yes, I spend my first minute in the sky churning through jetpack fuel like a desert survivor who doesn’t care he’s drinking petrol. But then I figure out the rhythm, and before long, I see a speck in the distance – it’s the Treehouse! Bit by bit, I coax forward motion out of the jetpack, and I’m soon drifting down from the sky like the prodigal science son these ungrateful bastards didn’t realise they needed. 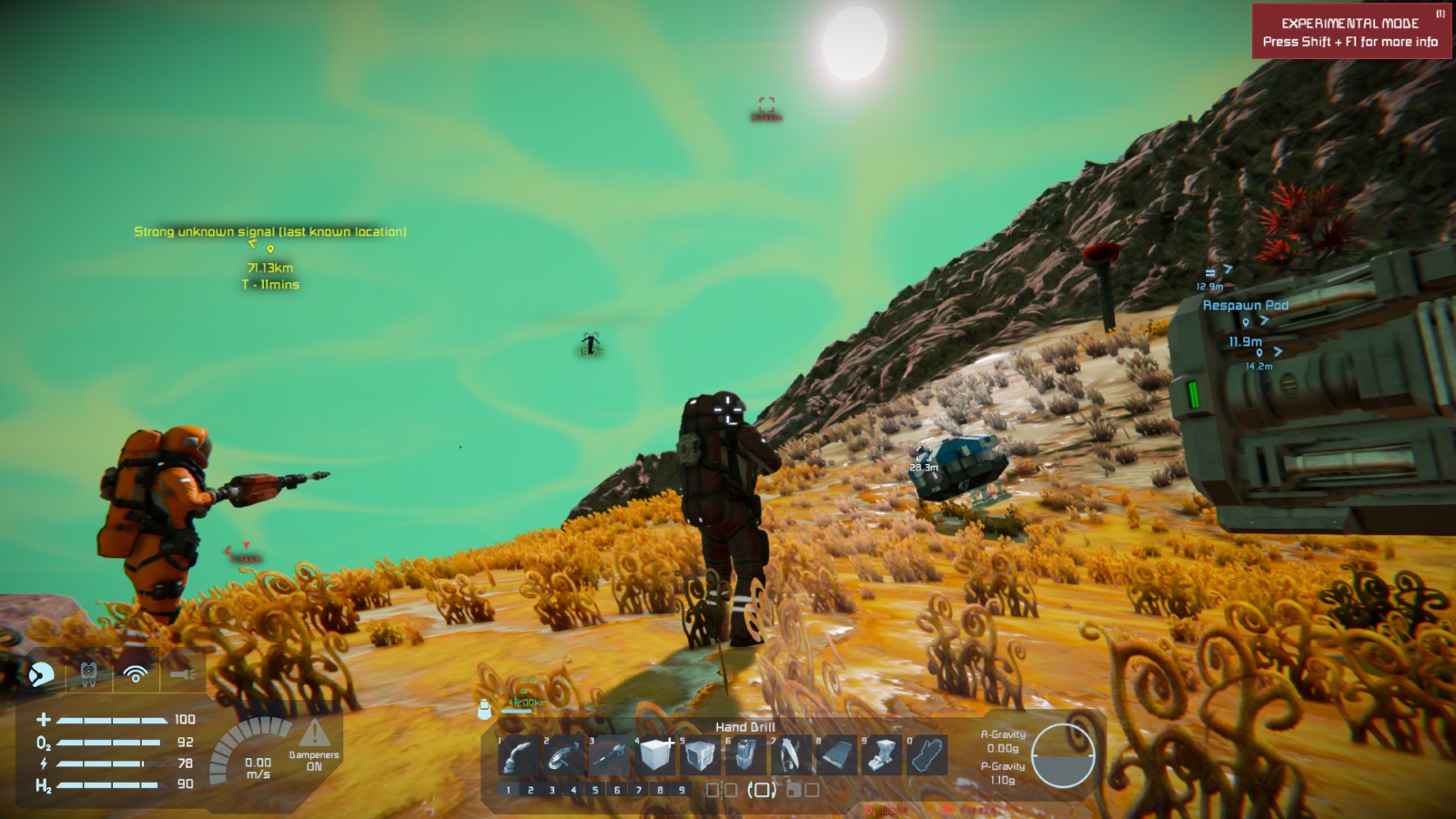 Here he comes, the Golden Icarus Boy of Science himself

In fairness, Science’s return is quite impressive, and it’s thematically fitting that he was the first of us to figure out rocket flight. The first thing he does on his return is critique our iron stocks. I worry this is going to be his Thing now; “Ooh, I’m Matt, I love iron, your iron is rubbish.”

Sec. and I are inordinately proud of the efforts we’ve made, and start pointing out everything like a toddler waving a sticky Playmobil castle at its babysitter. Look at the forge! Isn’t it good? And Security Officer Crowley built a ramp! Check out the Rock Collector! 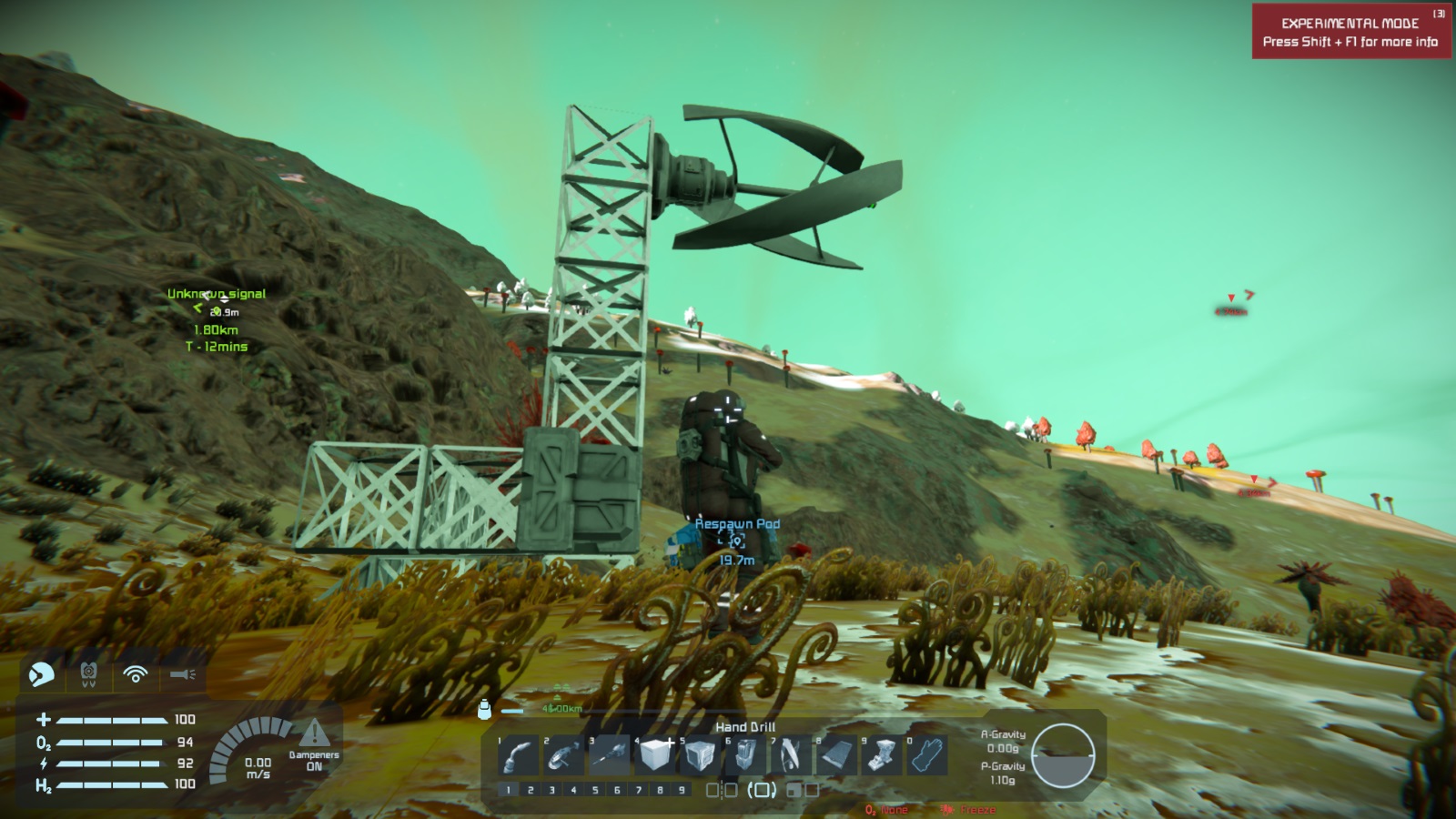 ODD explains that the Treehouse will do for a temporary base, but to complete the mission we’ll need to find somewhere with more room and seriously up our production operation. I ask ODD what our mission actually is, and it turns out it is to get one thousand tons of gold sent into orbit (which is swarming with space pirates), to reach Royal Planetary Services HQ.

“You did read the contract, didn’t you?” says ODD, extremely robot-ly.

We did not, it transpires. ODD informs us that failure to get one thousand tons of gold into space will incur consequences, but was vague about what they might be. Oh good.

There’s some chat going on at the Treehouse about the mission, and gold, and space pirates and stuff, but I don’t really care. I’m really really into this mining lark. By now I’ve worked out how to dig holes straight down into the ground, and so that’s what I’m doing. I’m making it deeper and deeper and deeper. And then I get stuck. I use my jetpack to try and escape, but I just bounce off all the mad ledges and twists in my big silly hole. So I have to call up from the bottom and beg the others for more jetpack fuel, which isn’t ideal. Still, at least Science Officer Cox can’t say he’s best at mining anymore. 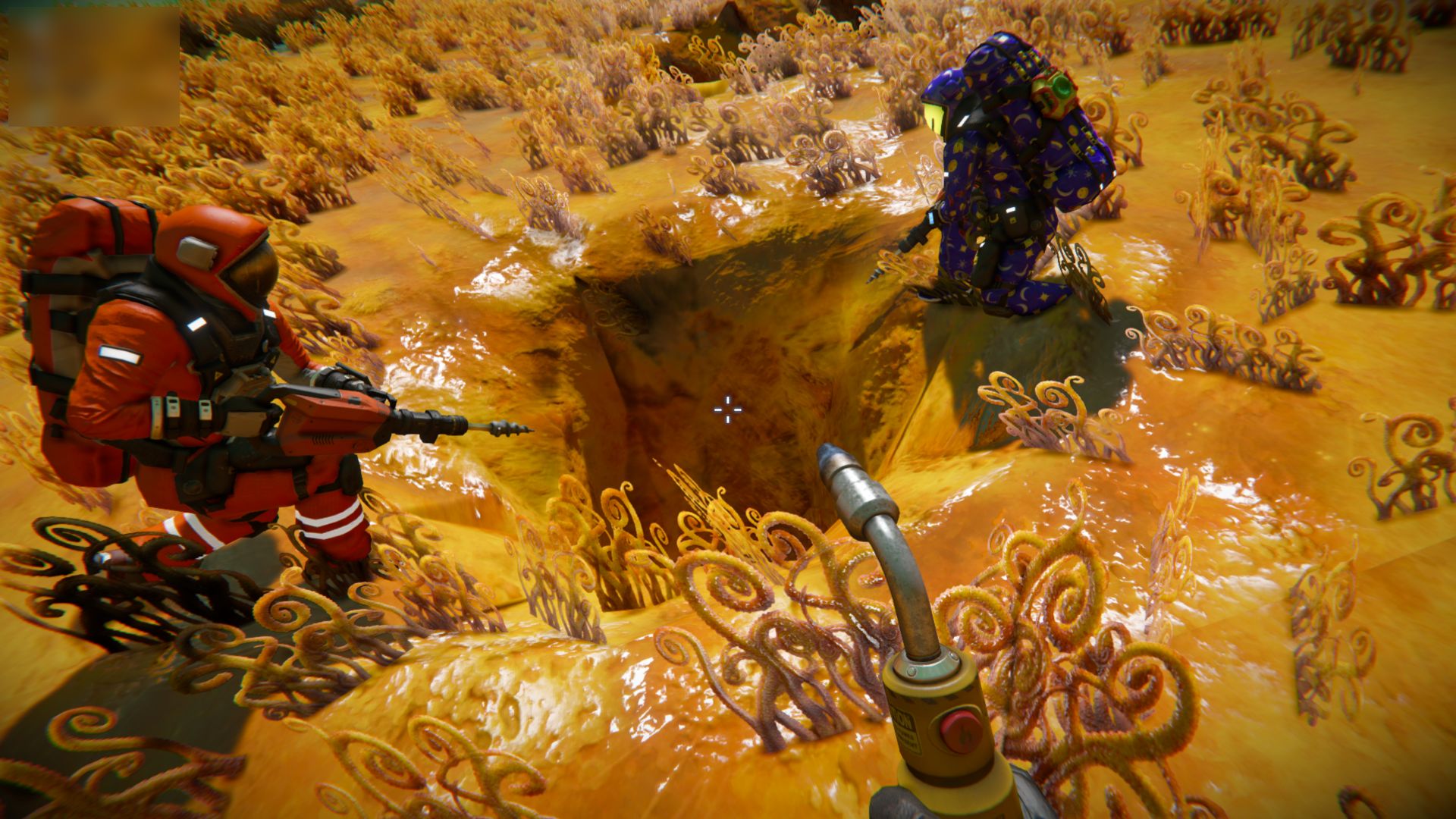 Nate’s got himself stuck down this stupid hole 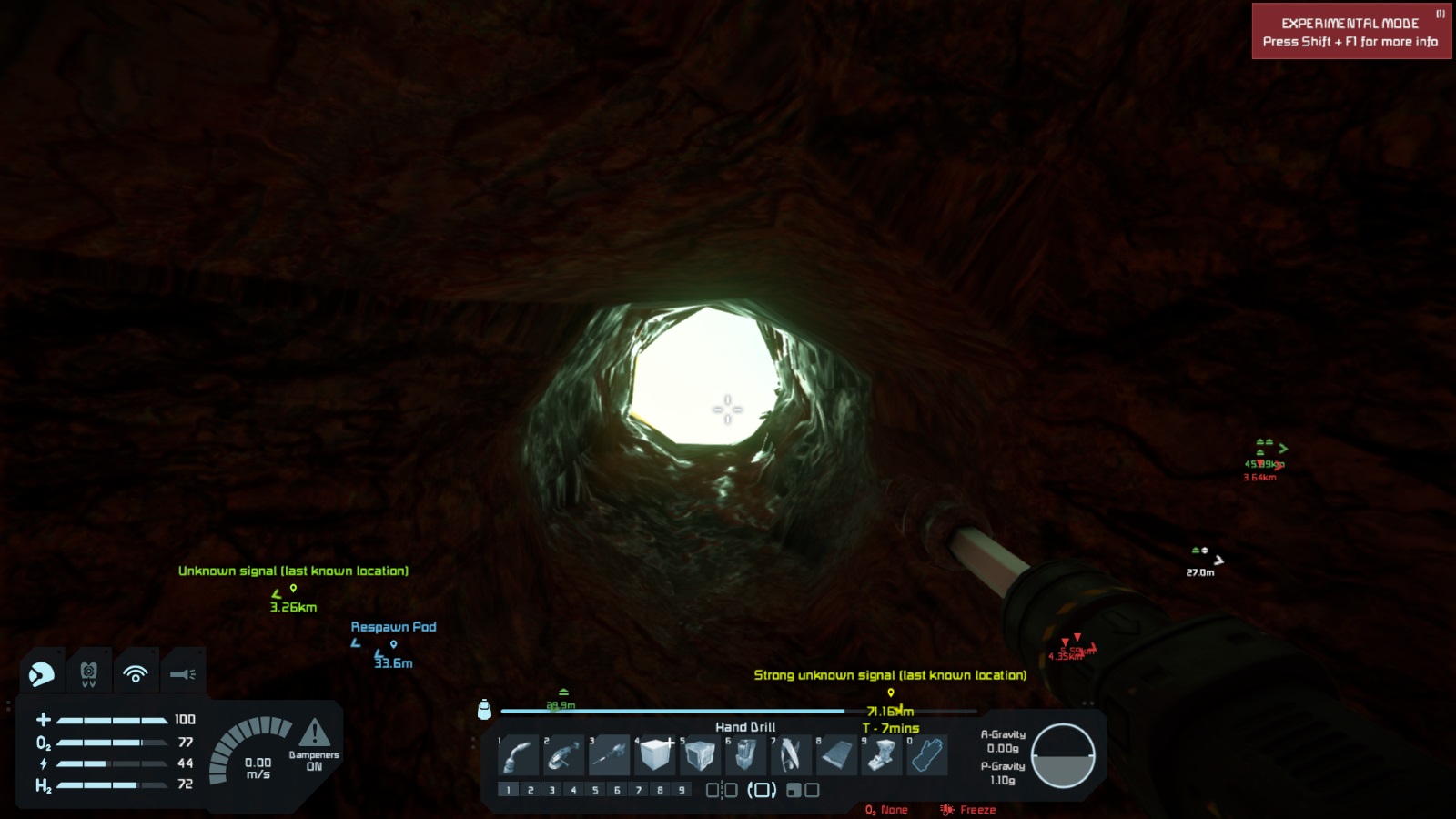 Here’s the same scene, as seen from the bottom of the stupid hole.

I was distraught to leave my iron behind, but now I have mastered the sky itself, I feel I am above such things. That fool Crowley can mine all the iron he likes: I have better things to do than dig with my hands. And so, after consultation with ODD, we begin work on a daring new project – a self-propelled vehicle, fitted with a mighty mechanised drill, and capable of ten times the output of our Security Officer. With such a machine in our hands, we’ll be able to step up our resource collection tenfold, and maybe have a hope of bringing civilisation to this awful rock. After consultation with Commander Bee – and with a sigh of resignation – I name the new vehicle the Eiffel 69. May it make us wealthy. 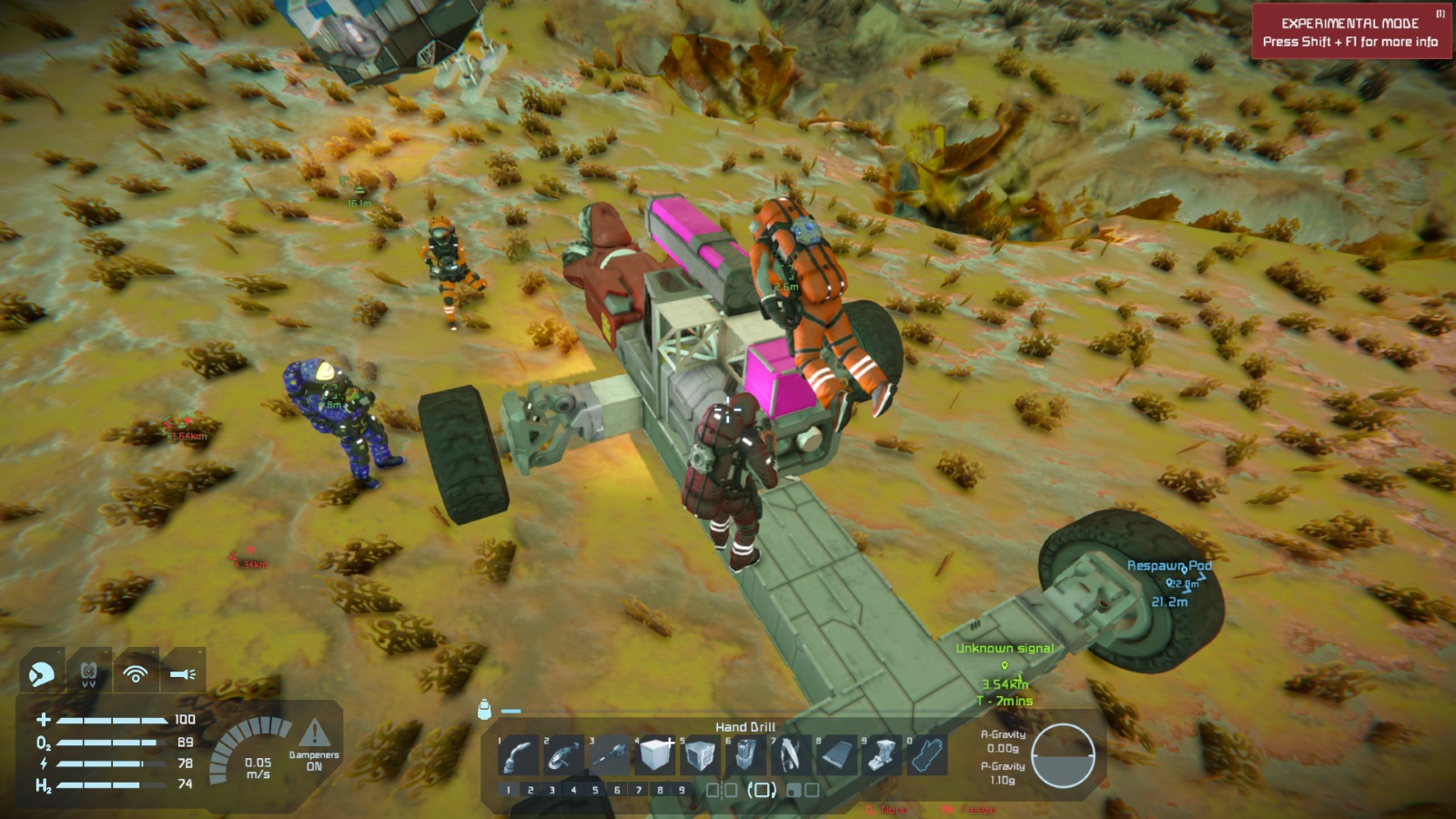 The Eiffel 69. Should have been the 65, to go with the naming scheme the Vengabus started, but 69 was funnier. Also it should really be blue. But look! We made a car!

Read on here for Wastes of Space part 3, in which Survey Officer Ligz joins the crew, the vehicle fleet expands, and The Dungeon is constructed.

As ever, the Wastes of Space team are eternally grateful to Brent/ODD (aka Sam Pinney, @ginbrogueshats on twitter) for being our uncanny digital Sherpa through the often-baffling world of Space Engineers. He literally taught Matt how to fly, like a god of old.