Last time on the BoC: The War Mayor Dashmob’s bombastic drive to militarise the fortress met a grisly end, as a massive mounted goblin army came sweeping out of the jungle. The War Mayor and his entire army died, slaughtered to the last in holding the goblins off. Everyone, that is, except the seemingly indestructible Id. Now, Id and the Basement’s other survivors must pick up the pieces, and find a new way to survive.

As she watches the last of the goblins flee the site of the massacre, Urist – the fort’s last mayor before Dashmob – declares herself in charge again, and nobody has the spirit to argue. She’s a changed dwarf, no longer interested in riches and the trappings of power, but taking the reins as she believes she can get them out of this disaster.

Here’s something cool – according to in-world historians, the catastrophic goblin invasion from last episode has an official name: it’s called “The Violent Attack”. And it sure was one of those.

Urist’s first order of business is clear – the dead must be dealt with. The Northern marsh is heaped with bodies, and the dwarves at least must be given a decent burial. An emergency tomb is designated on the floor housing the fort’s current elaborate gravesites, but the new burials are nowhere near as fancy as the glass-windowed mausoleums from summer. These are just rows of plain, unmarked stone coffins, in which the whole of the military are soon laid to rest.

The War Mayor is entombed there, and one of Urist’s lackeys brings her the Dabbling Dirge, the golden greaves she had forged in a desperate attempt to consolidate her rule, but which had then been seized by Dashmob. Looks like they came back after all. Urist snorts a bitter laugh, and has the greaves put on a brimstone pedestal beside Dahsmob’s otherwise unmarked grave. 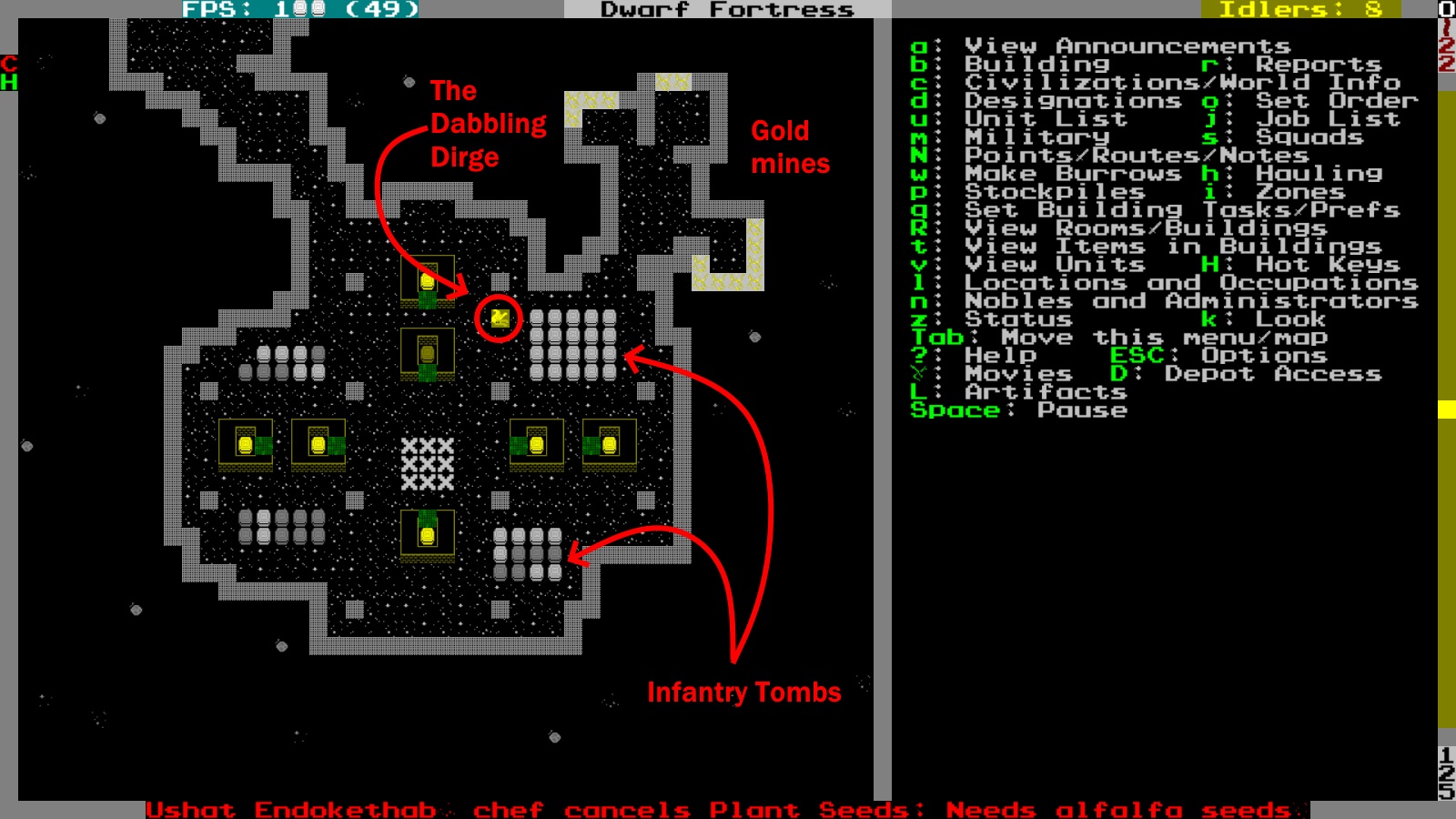 The new, expanded tomb. It’s still the only way into the fort’s gold mines – so the dwarves can’t go to dig riches from the earth without being reminded of the ultimate toll it will one day demand from them.

With the dead buried, Urist looks to the fort’s safety, for if the Violent Attack was anything to go by, the goblins will be back soon. And as it stands, the fort has no chance of fielding a military that could hope to drive them away. The only option is clear: it’s time for the dwarves to turtle up.

And so Urist orders a big ditch dug around the fort’s wooden palisade, effectively doubling its height and preventing its scaling by goblins. The fort’s north gate is walled over entirely, leaving only the main entrance in the East, which is fitted with a moat of its own and a retracting drawbridge. If the goblins come again, they’ll just wait them out.

And then, because she’s bloody Urist, she sets a ridiculous mandate. You know what we need? thinks the Mayor, as she watches her people dig a hurried trench, constantly shooting worried glimpses at the encircling forest. We need us some fucken bracelets. And so she orders the construction of a load of bracelets. Of course. 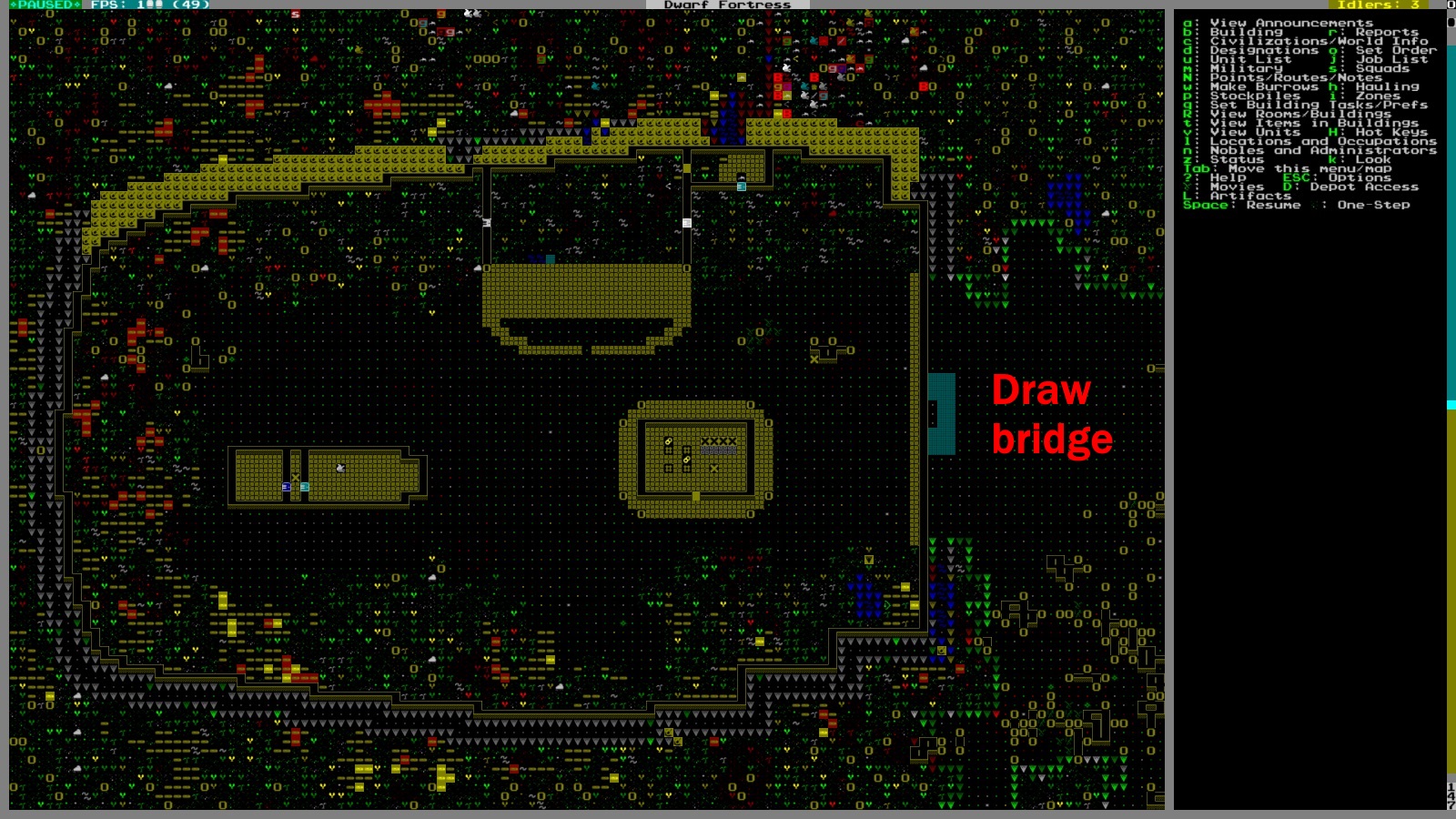 Dig through the ditches and burn all the goblins

Meanwhile, as the dwarves dig the new moat, three little girls are standing in the fly-clouds of the fresh battle site, watching the work progress. They have been playing make-believe among the ruined carcasses of the goblins and their mounts, in a way that isn’t remotely horrifying.

One of them is Amost, the daughter of Id, and suspected by many in the fort to be an avatar of Zon, the goddess of fortresses and war. Amost is playing here, just yards from the place where her mother was so recently struck down, and her father was near-fatally eviscerated, and she feels… pretty relaxed, all things considered.

Next is Vucar, the son of Thob the herbalist and Etur the engraver. The five-year-old dwarf is down in the foulness of the drainage trench – the slime-choked ravine where the worst of the fighting took place – spinning herself round til she gets dizzy. Obsessed with giant leopard seals, she used to be a really violent kid, but came to love peace when her little sister Libash was born.

Little Libash herself is a few yards away, playing with a chick. The baby chicken was the pet of the Swordsdwarf Kobuk. But with its master perished, the fluffy thing is just sitting mournfully on his empty iron helm. Libash, who believes in the power of art and peace above all else, looks at this tragic sight, and is struck with inspiration. 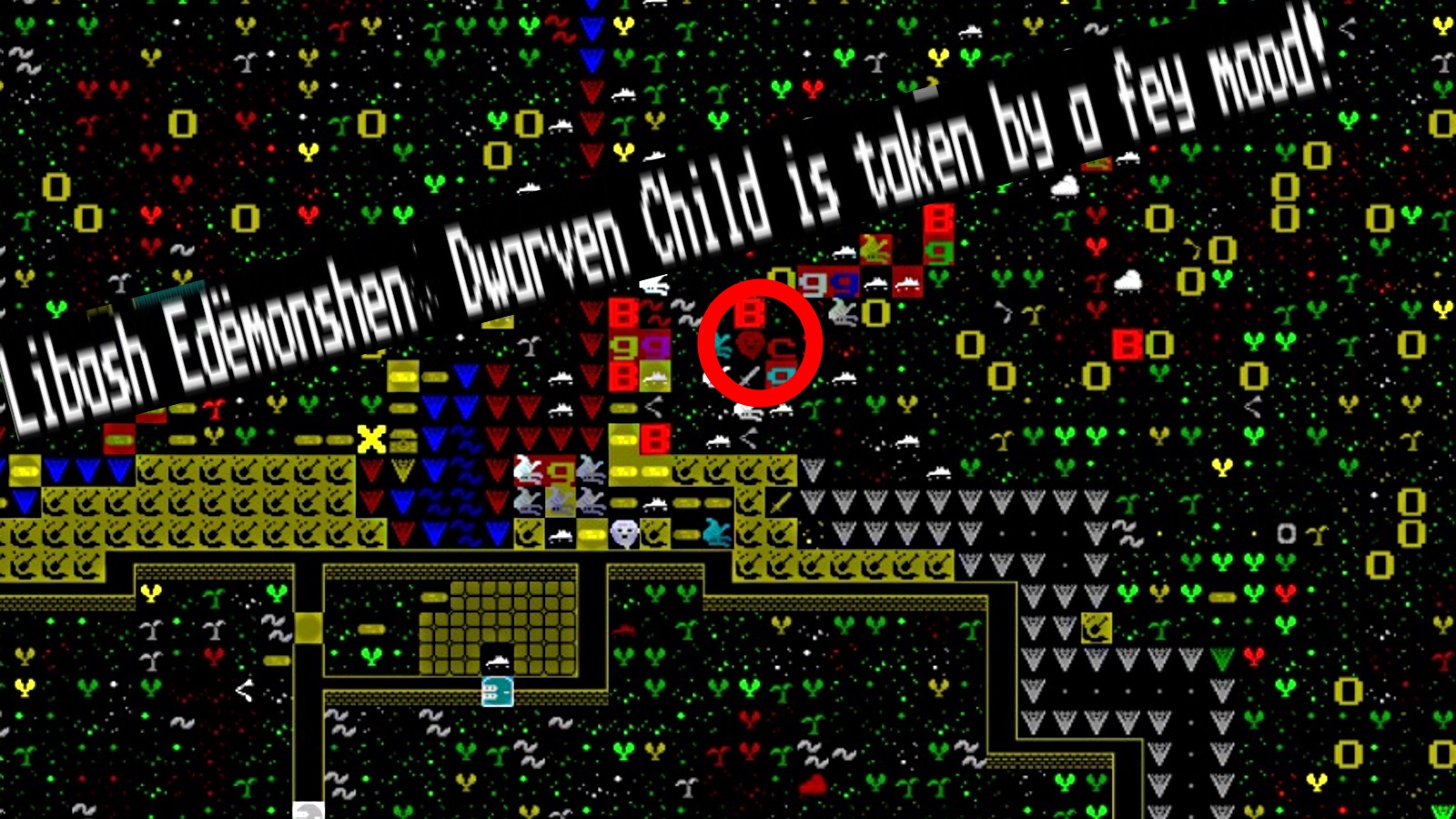 You can see the chicken beside her to the right, looking well sad. Btw, in Dwarf Fortress, if something is red, it’s a child. Except for when it’s a crundle. You just get to know what’s what.

Immediately, Libash claims a craftsdwarf’s workshop, and begins collecting materials. Although only two years old, she hauls rubber wood logs from further up the ditch, bismuthine blocks from the forges, a bale of cloth from the tailor’s stories, and a violet gem from the deepest tunnels. She gets to work.

On the last day of the dwarven year, which I like to imagine is dwarven christmas, Libash is on the cusp of completing her work. At this pivotal moment, let’s take a freeze-frame view of what’s going on in the rest of the fort:

* Udil the manager is in the Great Harvester tavern, belting out a song called “The sun sets on the gulley”. Is this song about the death of the War Mayor in the drainage trench? Is it about the end of an era, and the start of a new one under her old mate Urist?

* Rakust the lumberjack – who now wears about eight granite earrings – has been napping on one of the new coffins, and now he’s staggering round with a macadamia wood barrel under his arm. That’s the same wood that battered his leg when the fort was founded. Rakust is very odd.

* Lorbam is lost in the joy of training wild beasts, and currently busy trying to talk about six dingos out of recurring mental health crises. They are breeding like mad in the cages, too, thus constantly adding to the beastmaster’s workload. She has vaguely civilised two snakes.

* The fort’s barracks, once alive with the training of dozens of soldiers, are now dark and empty, save for a handful of children playing with toy hammers and axes. It’s a sobering reminder of what the fort has lost.

* Behind the barracks, deep in the rock, Id lies alone in his spartan quarters, healing slowly, and trying not to think about his lost wife Avuz. From the doorway, his daughter watches him with a completely blank expression. 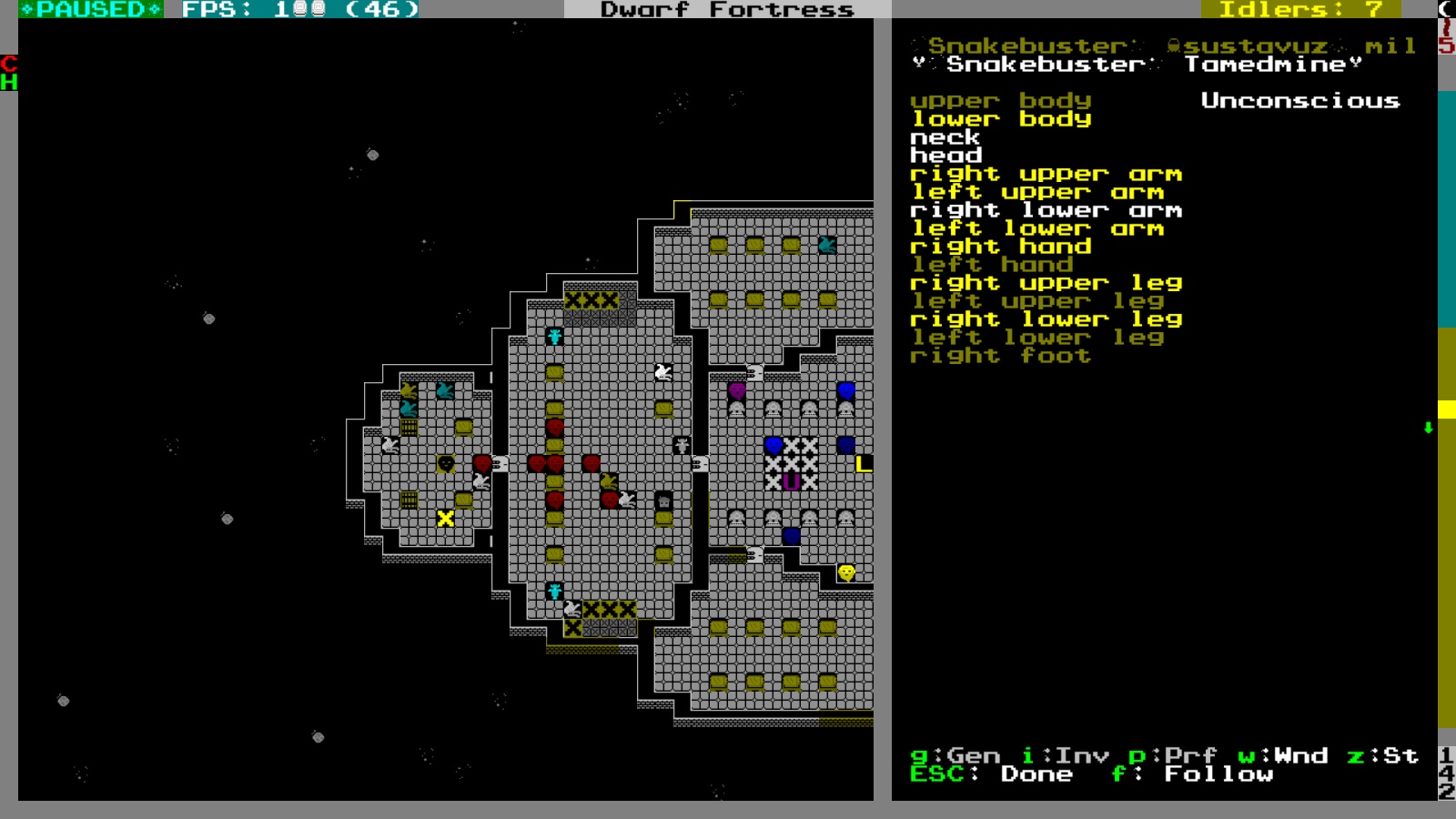 And then, as spring begins, Libash emerges from the workshop as a legendary woodcrafter, and reveals her work at last:

BEHOLD, THE SECT OF TROUBLING 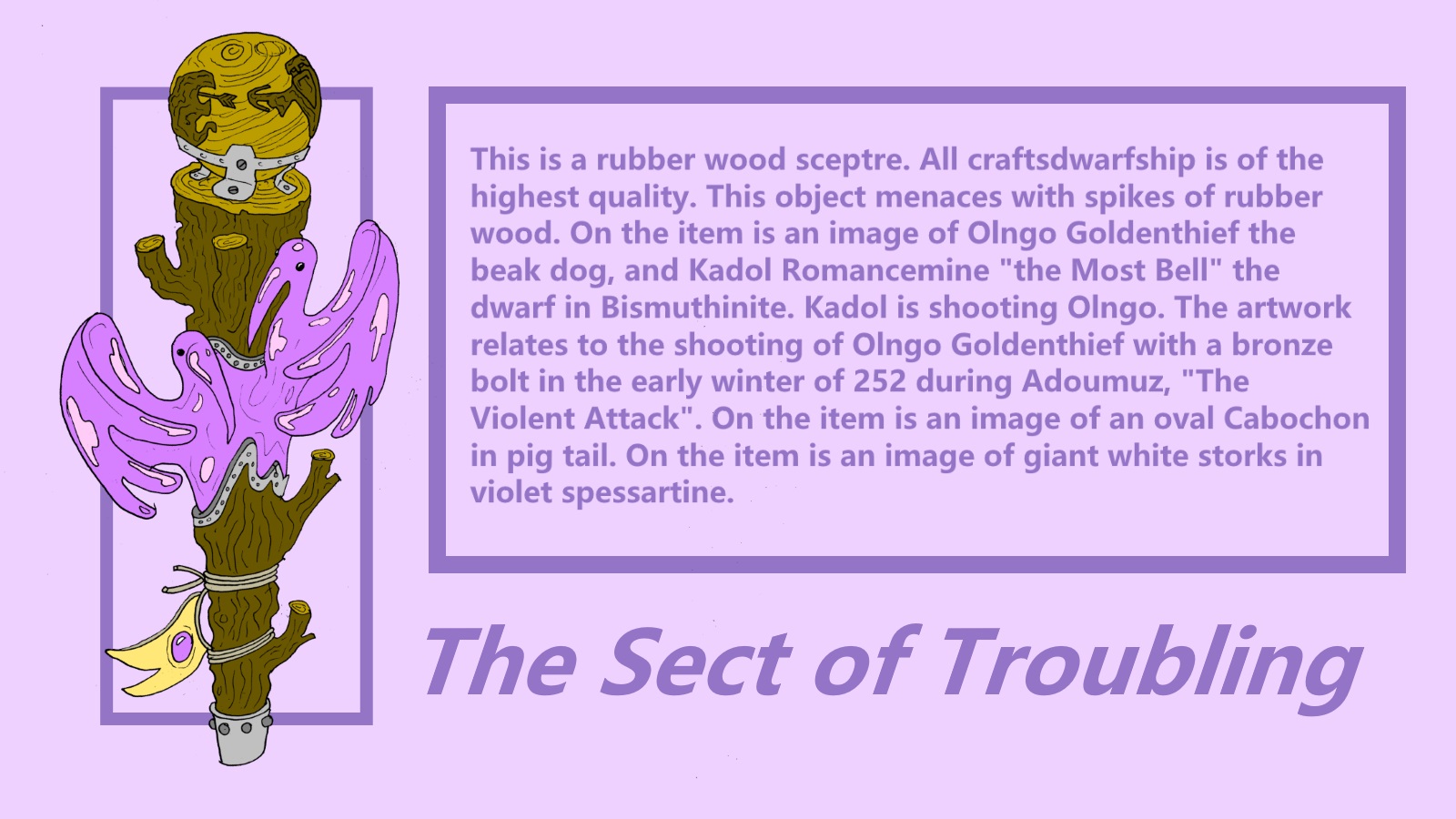 But who are the Sect the artefact is named after? Perhaps it’s referring to the core of Lorbam loyalists who have been agitating for a zoo during all this militarisation nonsense? Also, as an aside, I love that while she was playing on the battlefield, Libash would have certainly spent time looking at the very shot-up beak dog she would go on to immortalise in this sceptre. Also *also*, I love that Kadol gained the badass nickname “The Most Bell”. Might call Alice B that from now on.

Word spreads immediately of this incredible artefact, and the dwarves fall into massive rows over its interpretation. Clearly the depiction of Kadol’s desperate struggle is clear: that no matter the bravery of pursuing a martial future for the fort, it was always a doomed endeavour.

No: the glistening gemstone storks on the artefact, and its construction from the very wood of the rainforest, can mean only one thing. The fort must return to its roots as a zoo. No matter who the mayor is, the fort must follow Lorbam’s original vision, and fill this place with astounding animals. Even Urist can agree to this – especially since she gets to keep her old apartments, and all the status of office.

And so, on the first day of spring in the fort’s fourth year, she shakes hands with Lorbam, her former rival (who was probably distracted trying to teach a rattlesnake to sit), as they agree to bury the hatchet and work together. They are gonna get this place hidden away from the goblins, and then they’re gonna make a zoo.

Next time on the BoC: A great new beginning – but how long will it last?