Rage 2 is very almost here on PC, but for a game half-developed by Doom maestros id Software, there is something really quite rotten about the state of Rage 2’s default keyboard controls. For as well as having an arsenal of mildly ridiculous guns at your disposal, you also have various special abilities to help you in the heat of battle, such as the sonic boom-emitting Shatter Strike punch. The only problem is that the default control for Shatter Strike is Ctrl+F.

Now I don’t know about you, but when I’ve got three fingers on WAD and my little finger almost always stuck on Shift so I can move around without getting riddled with bullets, Ctrl+F is, quite literally, a bit of a stretch. Infuriatingly, the rest of Rage 2’s special abilities are all tied to Ctrl as well. Fancy a Slam? That’s Ctrl+Space. Throw up a barrier? Ctrl+C. It goes on. Fortunately, help is at hand inside Rage 2’s key mapping menu. Here’s how to remap those terrible default keyboard controls so you can carry on playing Rage 2 like a true mohawked champion.

I should point out, of course, that the rest of Rage 2’s keyboard controls aren’t actually that bad. It’s really just the special abilities that have been giving me so much grief – although why anyone thought this was an acceptable state of affairs in the first place is anyone’s guess.

Luckily, instead of having to press Ctrl+ another button to activate your super punches and spine-splitting ground pounds, you can simply reassign each one to something called an Instant Cast binding. This means you only have to press a single button instead of two. Your beserker-esque Overdrive ability, for example, is already set to be Instant Casted to V, but the rest (for some reason) are all tied up with your Ctrl-based Focus ability by default. 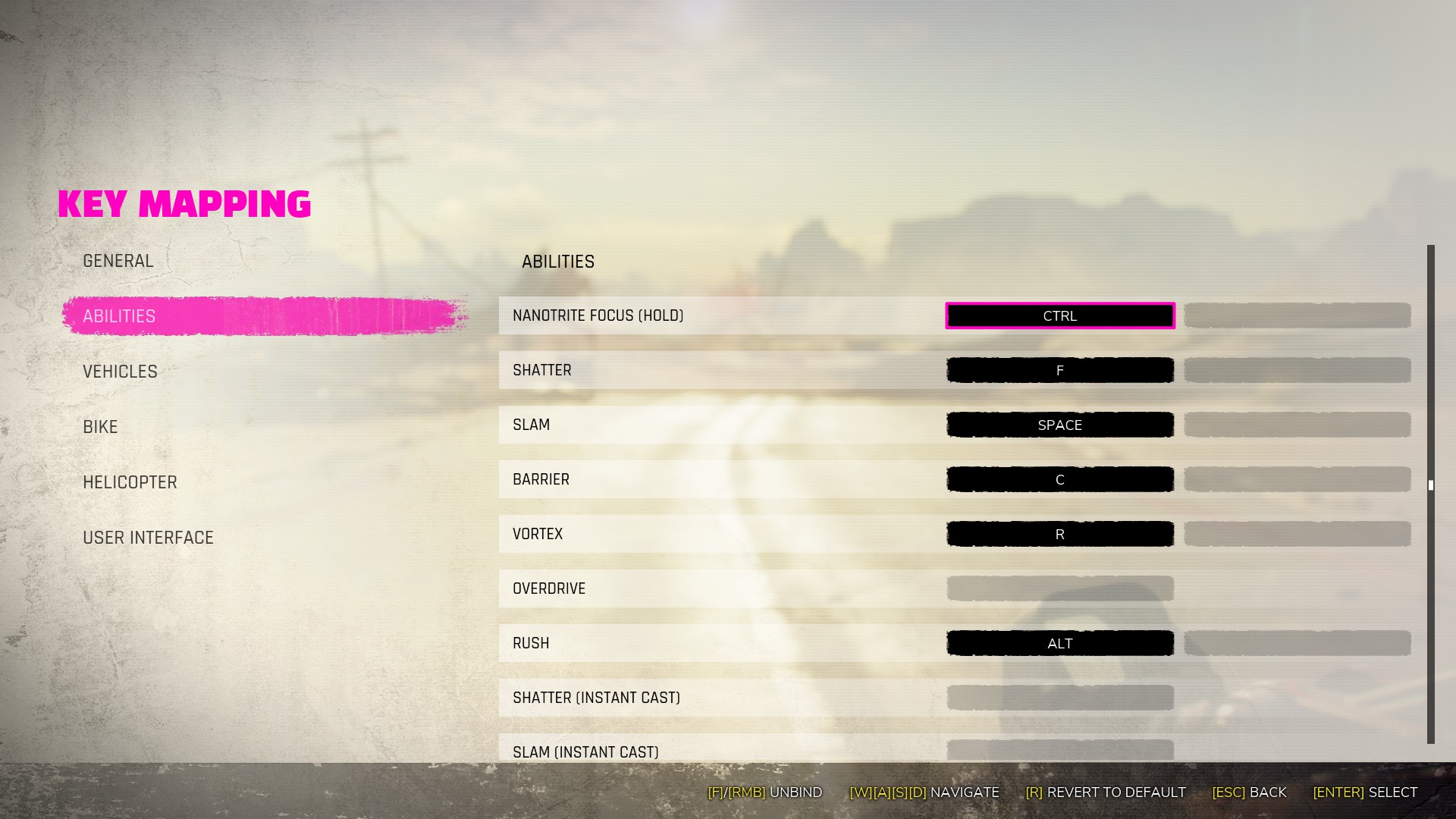 By default, Rage 2’s special abilities are (infuriatingly) all tied to the Ctrl button.

Still, if you head to Rage 2’s Settings menu, click Keyboard & Mouse Bindings and then scroll all the way down to the Abilities section, you’ll find the options in question. Some of you may be perfectly fine contorting your hands to hit Ctrl+F in the heat of battle, of course, but if, like me, your joints are already pretty decrepit simply by virtue of being older than 20 years old age, then you’ll want to remap those abilities to the Instant Cast options straight off the bat.

Obviously, you’ll want to remap them to keys that are within easy reach of the WASD keys for when you need them in the middle of a gunfight, but I’ll warn you now that Rage 2’s other myriad controls already occupy a fair chunk of your old keyboard, so you may need to spend a bit of time tweaking other options as well depending on what you find most comfortable. 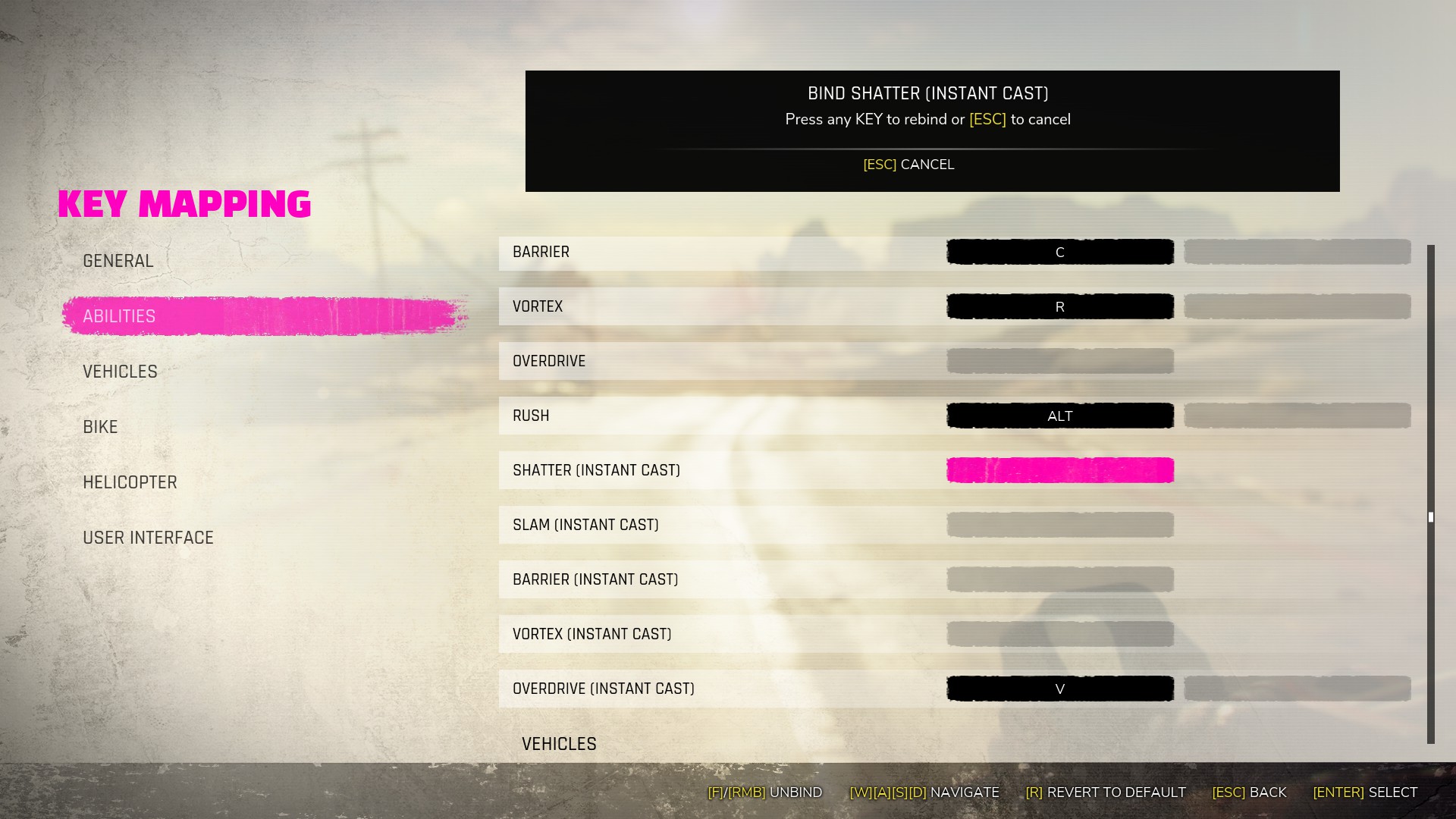 Thankfully, this act of finger contortion can be quickly rectified by remapping them to the available Instant Cast bindings.

Matt, for example, (who is currently in the middle of deciding wot he thinks of Rage 2 at the moment) found that simply changing Ctrl to Alt was enough to solve his hand contortion woes (although he is a young’un with considerably suppler bones than I), describing the method as “surprisingly nice”. He also told me, and I quote, that “pressing Alt + Space to do the Slam in particular makes me do a weirdly satisfying thing with my thumb that sort of evokes the actual movement.”

Whatever floats your fluorescent-coloured boat, I guess.

Or, you know, you could always dump the keyboard entirely and settle for a controller instead, which in hindsight seems to be obviously what this game was actually designed for. However, for the mouse and keyboard stalwarts among you, hopefully this tiny bit of advice will help make Rage 2 a bit more playable than it might have been otherwise.