If you asked me to guess the weight of Roccat’s new Renga Boost gaming headset, I would swear blind that it’s never going to beat the 210g Roccat Noz gaming headset, because, well, just look at the thing. Its 50mm audio drivers are way bigger and chunkier than the Noz’s skinny little ear muffs, and even the fold-down microphone has a thicker, more substantial boom arm on the left hand side. And yet, somehow, Roccat have managed to shave this headset down to an identical 210g, making this supposed studio-grade headset feel practically weightless once it’s on your face.

The Renga Boost is open-backed, too, meaning you can hear everything going on around you with perfect clarity. I kid you not, it literally felt like I wasn’t wearing anything at all on my head when I first put the Renga Boost on, as my keyboard clacks were just as loud as before, and I could still hear my cats clambering around the never-ending box fort that is my office behind me.

Admittedly, that’s sort of the whole point of open-backed headphones – they’re meant to produce a wider, clearer sound that’s more natural and realistic than closed-back headphones, as if you were right there listening to it in the room. This does mean, of course, that they’re also not particularly suitable when you’re using them in the company of others. Just as you can hear sounds leak in from the outside, so too can everyone around you hear the shots, bangs and roaring soundtracks of whatever you’re playing. As such, those of you whose PCs tend to reside in the living room may want to think twice about getting open-backed headphones like this before you start inflicting things like the online screams of terrible twelve-year-olds on your friends and family. 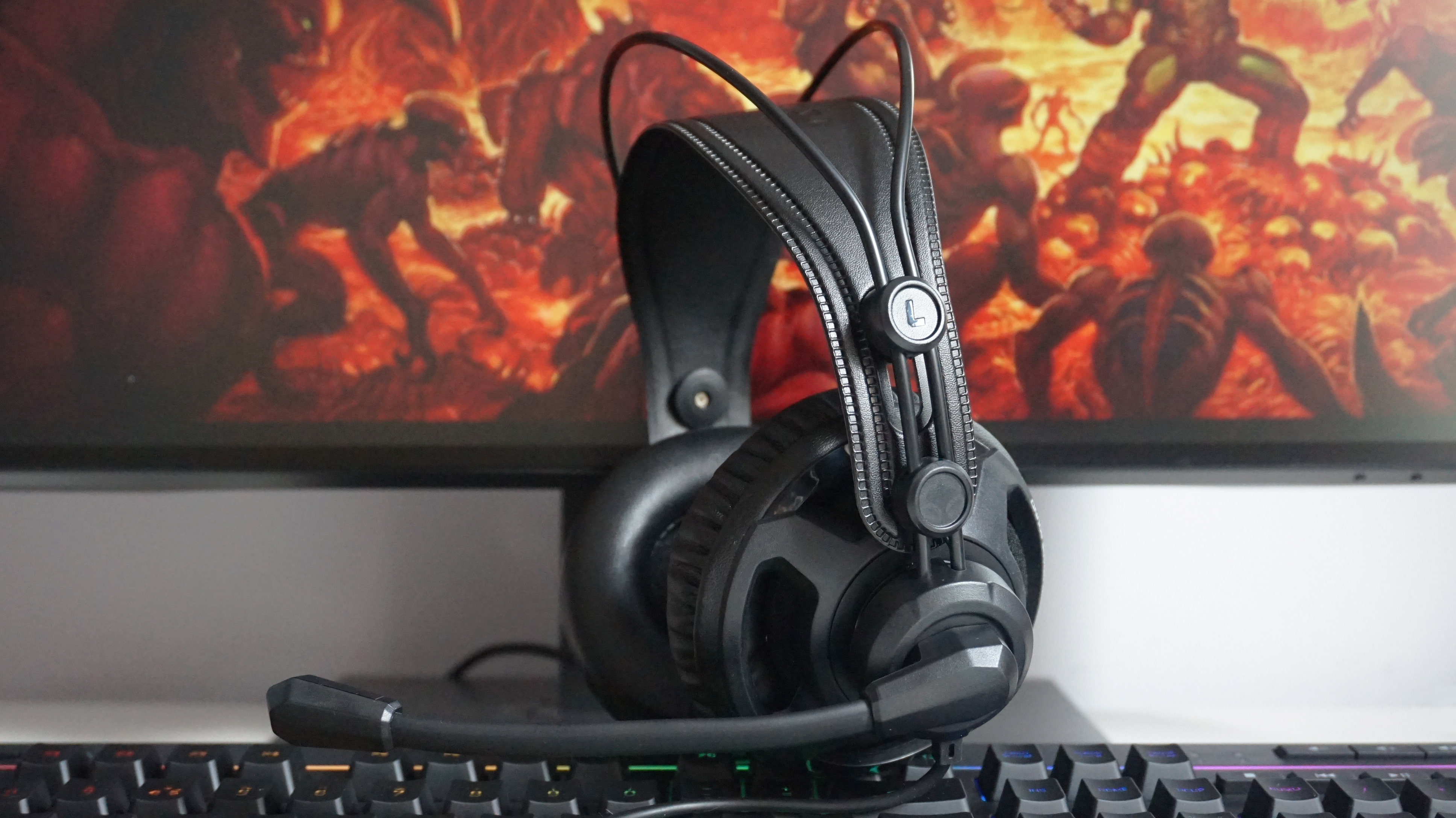 Still, provided you’re planning to use this in an altogether more solitary environment, the Renga Boost has a lot to recommend it. For starters, it’s pretty darn comfortable. That’s mostly because the headband consists of a single leather-esque strap that automatically stretches to the shape of your head without the need for any kind of manual adjustment. It’s a similar idea to the ski-goggle design of my favourite, the Steelseries Arctis 7, which is hands down the most comfortable kind of headset headband I’ve ever worn.

And for a while, the Renga Boost looked as though it would match the Arctis 7 beat for beat in the old comfort department. The headset’s general weightlessness meant it sat quite happily on my noggin for a good chunk of time, and the soft, faux leather ear cups never felt like they were getting too hot or scratchy against my cheeks. In the end, however, it still started to pinch a bit after around half an hour or so.

In its defence, it wasn’t actually the headband that was the main culprit this time round. Instead, it was ear cups, which is pretty surprising given I usually don’t have a problem with these. Alas, it was around the back of my ears where the Renga Boost started to make itself known, and I suspect it’s probably because the ear cups themselves are pretty snug. When I tried shuffling them back, for instance, I found they were already brushing up against the edge of my ear, which didn’t give me a huge amount of leeway to try and ease the pressure. By and large, though, that was the only main niggle I had with the Renga Boost, as (for once) the headband itself didn’t give me any hassle whatsoever. 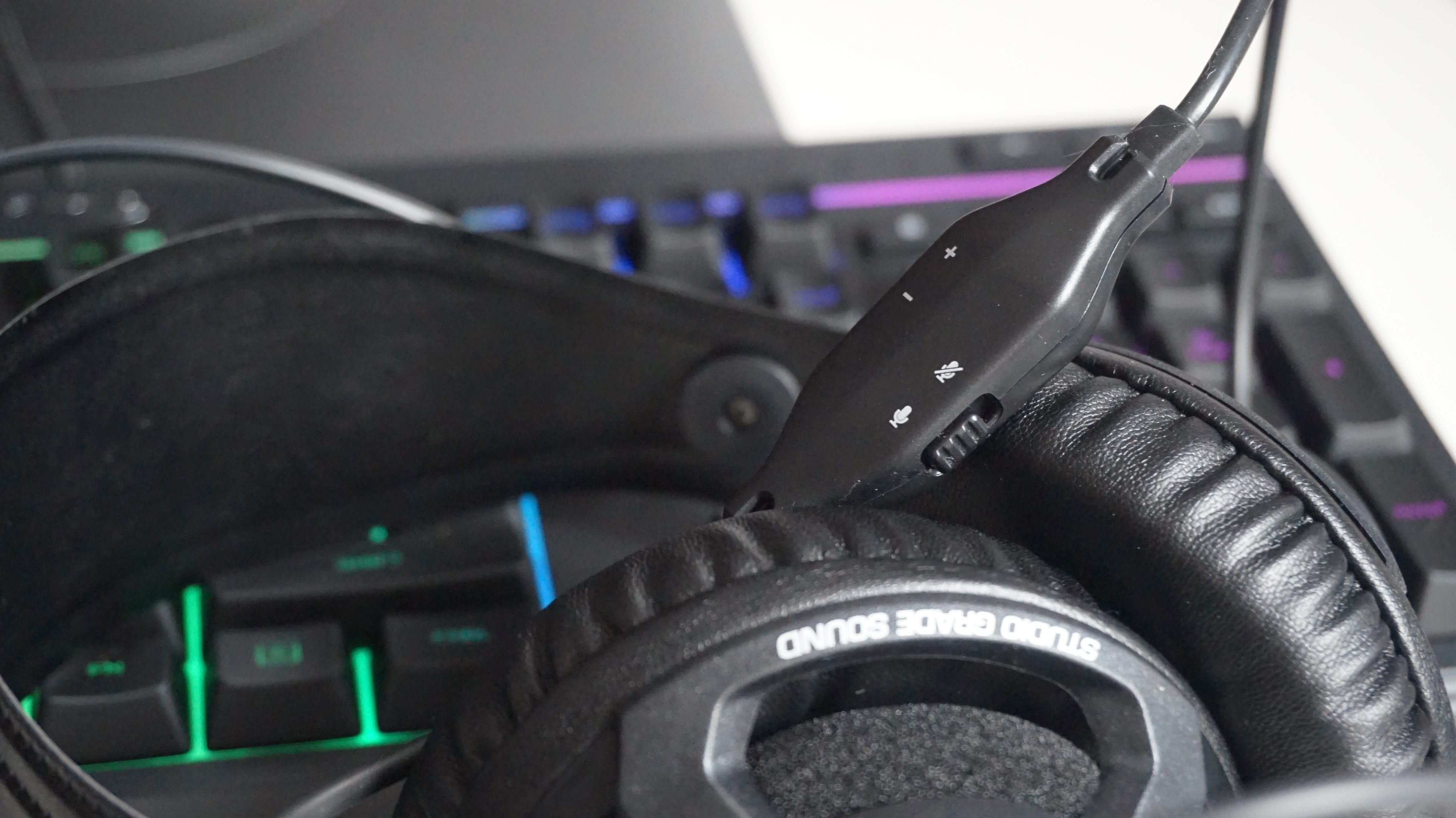 The Renga Boost doesn’t have any controls on the ear cups, but you do get a volume and microphone mute button on the inline control.

As for the Renga Boost’s sound quality, I’ll admit to being a bit skeptical given how weedy the Noz was when I tested it last month. In Hellblade: Senua’s Sacrifice, though, everything was business as usual. All the voices whispering and snickering in Senua’s head came through wonderfully clear on the Renga Boost, and it really felt like they were all nattering away in the same room behind me. The crackling thunder also rumbled away pleasingly in the background, adding a sense of menace to proceedings that complemented the foreboding atmosphere.

I was also impressed with how it handled Doom’s soundtrack as well. There was, admittedly a noticeable airiness to big shoot-outs, with the bass sounding a touch tinny in places compared to other closed-back gaming headsets I’ve tested in the past, but it definitely made a better fist of things than the Roccat Noz. The pumping bass of the battle music sounded well-balanced against the oncoming demon screeches and enemy gunfire, and my Super Shotgun blasts had a decent amount of heft to them.

Most importantly, the wider soundstage afforded by the Renga Boost’s open-backed design meant I was super aware of everything going on around me, making the headset feel more immersive as a result. Sure, I could have done with a smidge more bass to really seal the deal, but considering the Renga Boost’s reasonably low cost, it’s something I’m willing to let slide here.

Final Fantasy XV sounded great as well. From the swell of the orchestral incidental music to the busy battle themes, the Renga Boost took everything in its stride, perfectly balancing the strings and percussion against the roars and zip-zap of the game’s combat. 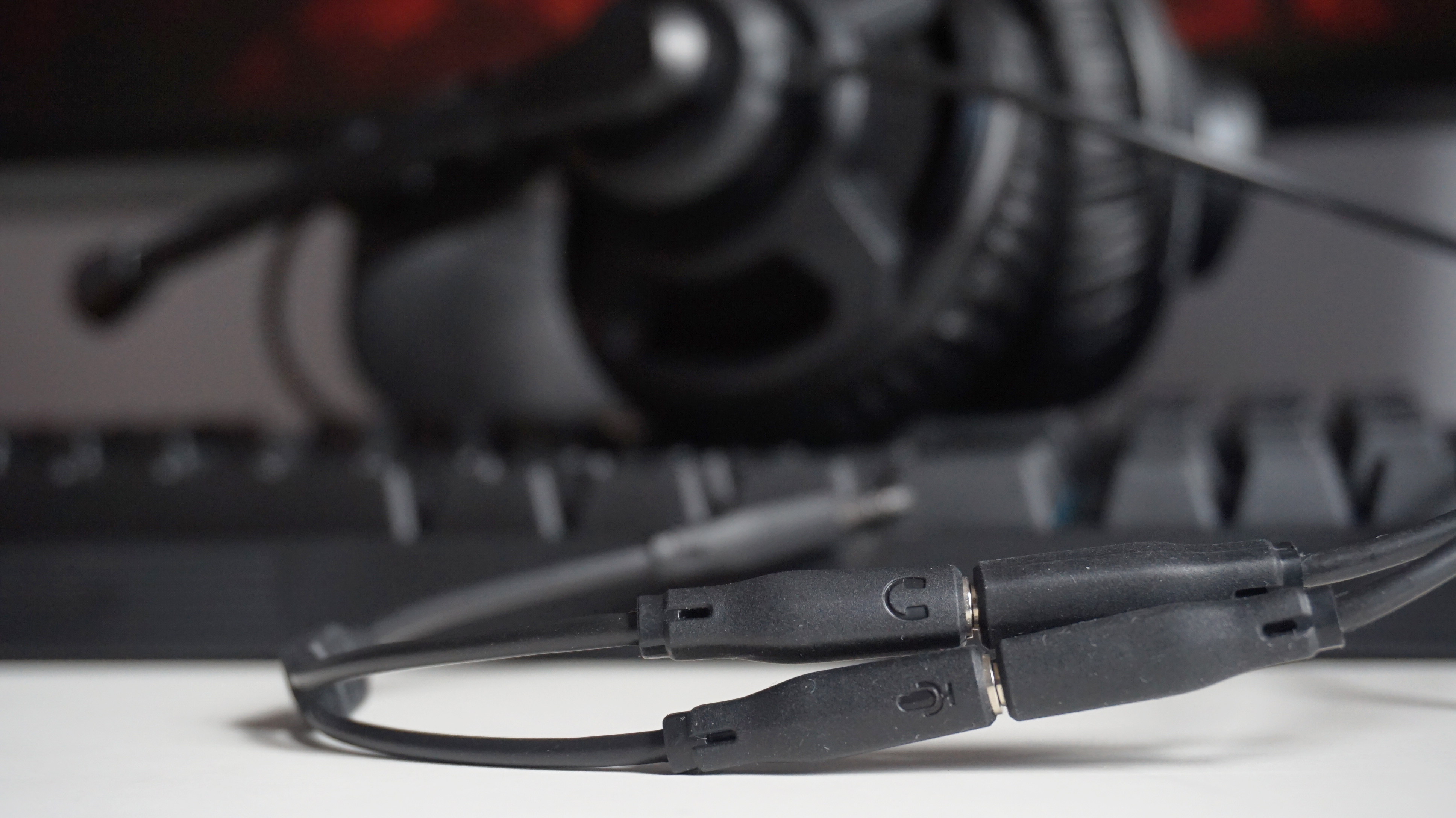 The Renga Boost comes with a combined 3.5mm adapter in the box so you can use it with laptops, phones and consoles as well as PC.

The Renga Boost held up when I switched over to some of my more regular music in iTunes, too. I must admit, I had a bit of trouble getting its combined 3.5mm adapter to play ball with my laptop – on first listening, my favourite Hunt or be Hunted track from Final Fantasy XV sounded like every single instrument was being squeezed through a small tube – but I suspect that’s probably more to do with my laptop’s occasionally weird audio settings than anything else, as when I ditched the adapter and just plugged in the regular headset cable (leaving the mic cable disconnected), it sounded just fine.

The soothing strings of the Heaven’s Vault soundtrack, for example, sounded perfectly balanced against its tinkling piano sections, and rock and pop songs had me tapping my toes as I enjoyed their clear vocals and full-bodied backing tracks.

The only mildly disappointing thing about the Renga Boost is its microphone. My voice came through nice and clear when I recorded myself speaking in Audacity, but there was also a noticeable hiss going on in the background, which I found difficult to get rid of. The only way to mute the microphone is to use the inline control, too – not a huge burden, all told, but a flip-to-mute would have also been good to see as well, especially for those all-important swigs of tea when you just want to lift the microphone slightly instead of faffing around trying to find the tiny mute switch on its generously long cable. 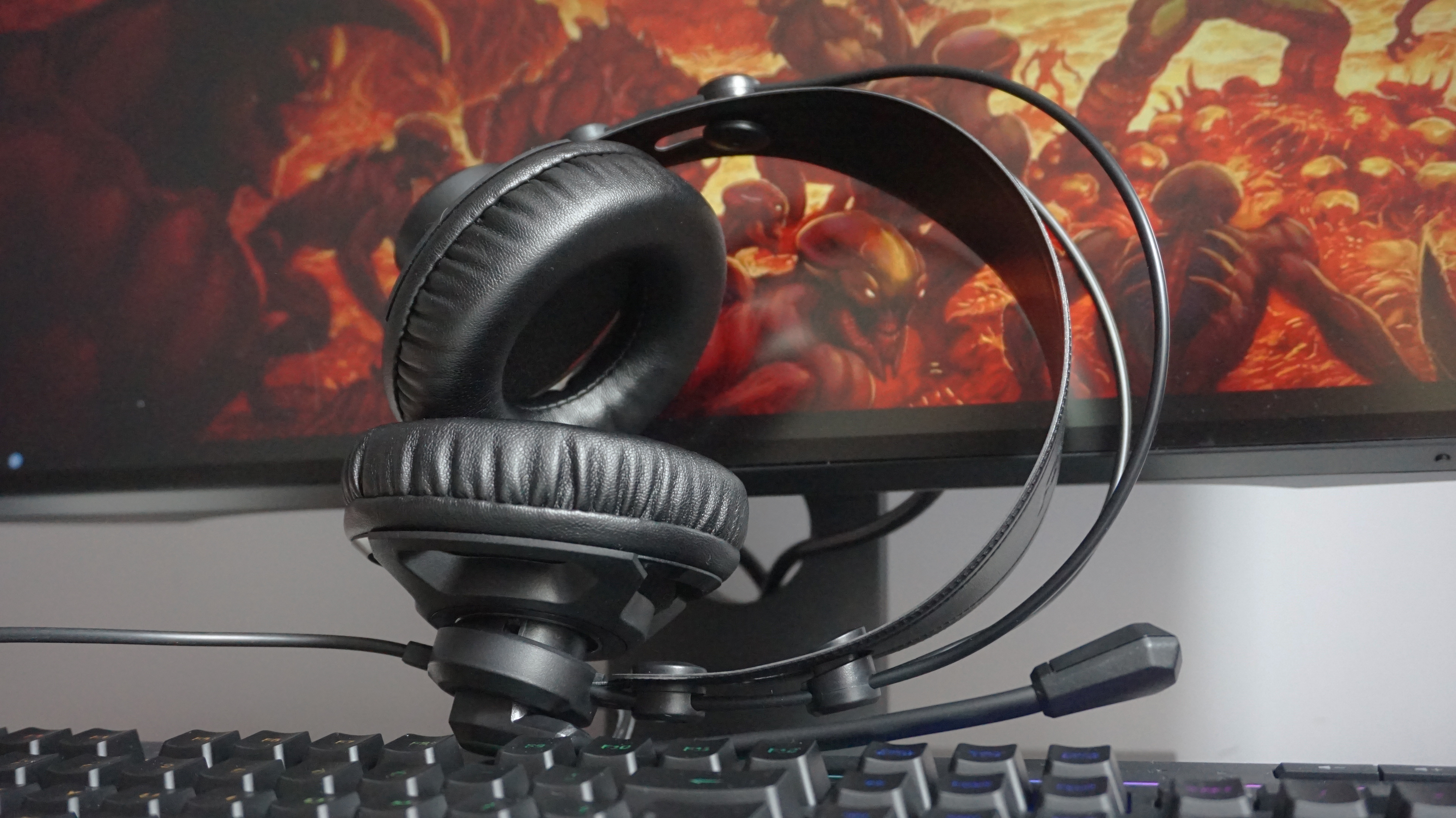 Still, considering the Roccat Renga Boost costs just £50 / $50, I’d say it’s a pretty small niggle in the grand scheme of things. The rest of the headset is excellent for this kind of money, offering a high degree of comfort and a lovely, balanced sound in a wide range of games. The similarly-priced Turtle Beach Atlas Three may still be preferable for those who’d like a bit more bass at their disposal, but for everyone else in search of a cheap, no-frills headset, the Roccat Renga Boost replaces the Cougar Phontum as my new budget headset of choice in my headset rankings.