Last month, I put Nvidia’s GTX ray tracing driver to the test, seeing what kind of speeds were possible on the GTX 1060 and GTX 1070 in Metro Exodus and Shadow of the Tomb Raider. The results, it’s fair to say, were pretty mixed. Metro was completely unplayable on both cards, but Tomb Raider did, in fact, show promising signs of life as long as you kept its ray tracing setting on Medium – which ended being such a minuscule kind of effect that it was barely worth bothering with.

Now, I’ve got the GTX 1660 and GTX 1660 Ti back in to see what they’re capable of as well. Can our new best graphics card champs’ new Turing GPUs make a better go of ray tracing than the GTX 10-series’ old Pascal architecture? Let’s find out.

Before we do that, though, it’s worth re-iterating what each game is actually doing when we talk about ray tracing, as there are lots of different ray tracing techniques that all fall under the same banner.

As you can see from the image below, Shadow of the Tomb Raider only uses ray tracing to render its titular shadows, whereas Metro Exodus applies it to its entire global illumination system as well as its ambient occlusion tech (the stuff wot makes in-game light look so lovely and realistic). 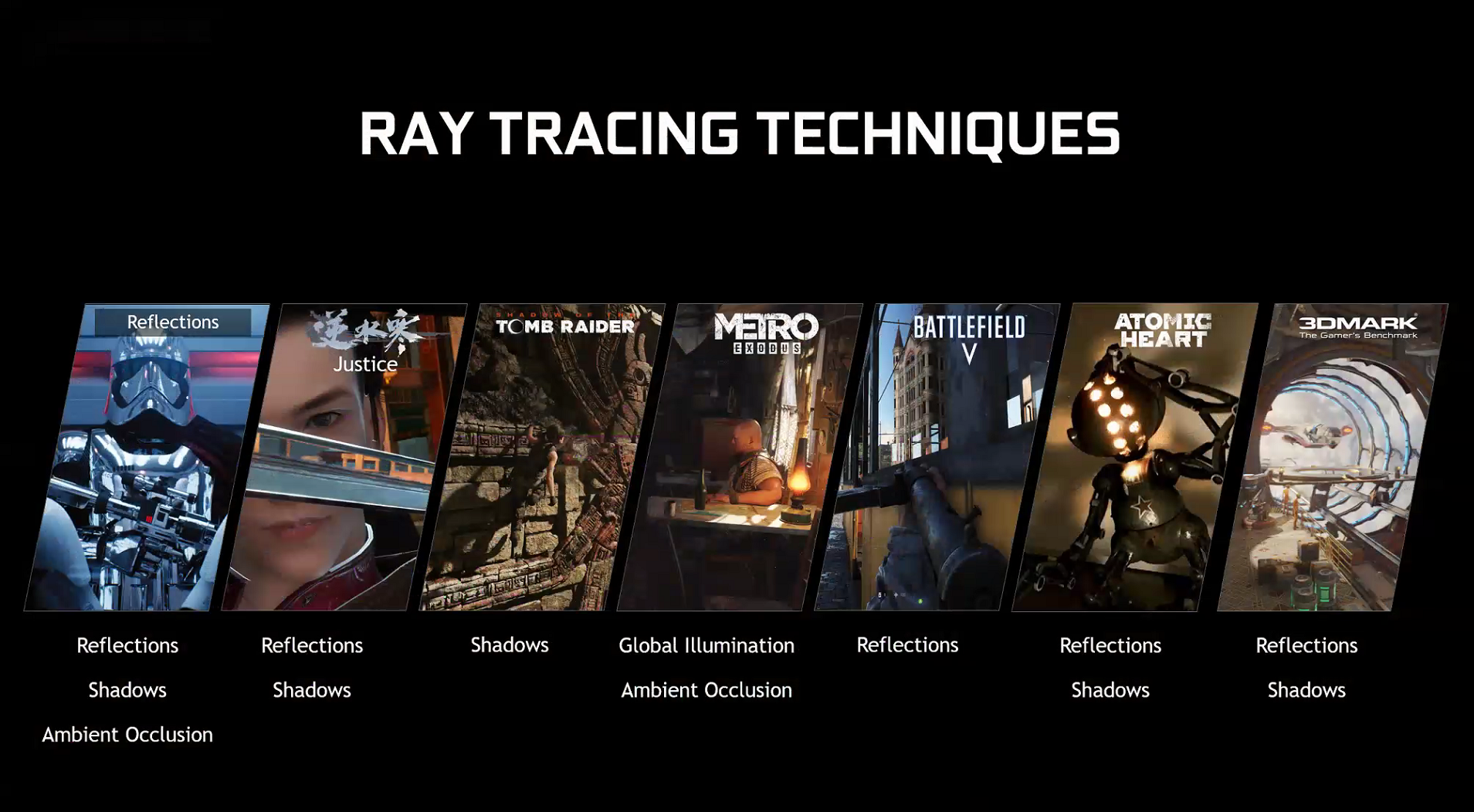 As you’ve probably guessed, just applying ray tracing to a game’s shadows is going to be a lot less taxing on your old graphics card than using it for the entire lighting system. That’s why Metro Exodus proved to be such a challenge for the GTX 1060 and GTX 1070 when I tested them last month – and why it continues to be such a mare even for the GTX 1660 and GTX 1660 Ti.

In their defence, the GTX 1660 and GTX 1660 Ti did just about manage a playable frame rate in Metro Exodus with ray tracing turned on, but you’ll have to make do with the absolute bare minimum graphics settings in order to do it.

Just like before, I tested each card by jogging up and down the side of the train in the game’s first open world area known as the Volga with the resolution set to 1920×1080. Ray tracing won’t turn on when the graphics quality is set to Low, so I kept it on Medium with all the rest of Metro’s other fancy graphics effects switched off in order to maximise my chances of a stable frame rate.

And for the most part, it was actually quite do-able. Both the GTX 1660 and GTX 1660 Ti settled around the 30-43fps zone most of the time when I set Metro’s ray tracing setting to High (the lowest possible option), and each card only saw a couple of sub-30 dips down to 27fps when I turned the camera a bit too quickly or happened to be looking at a particularly complex bit of horizon. 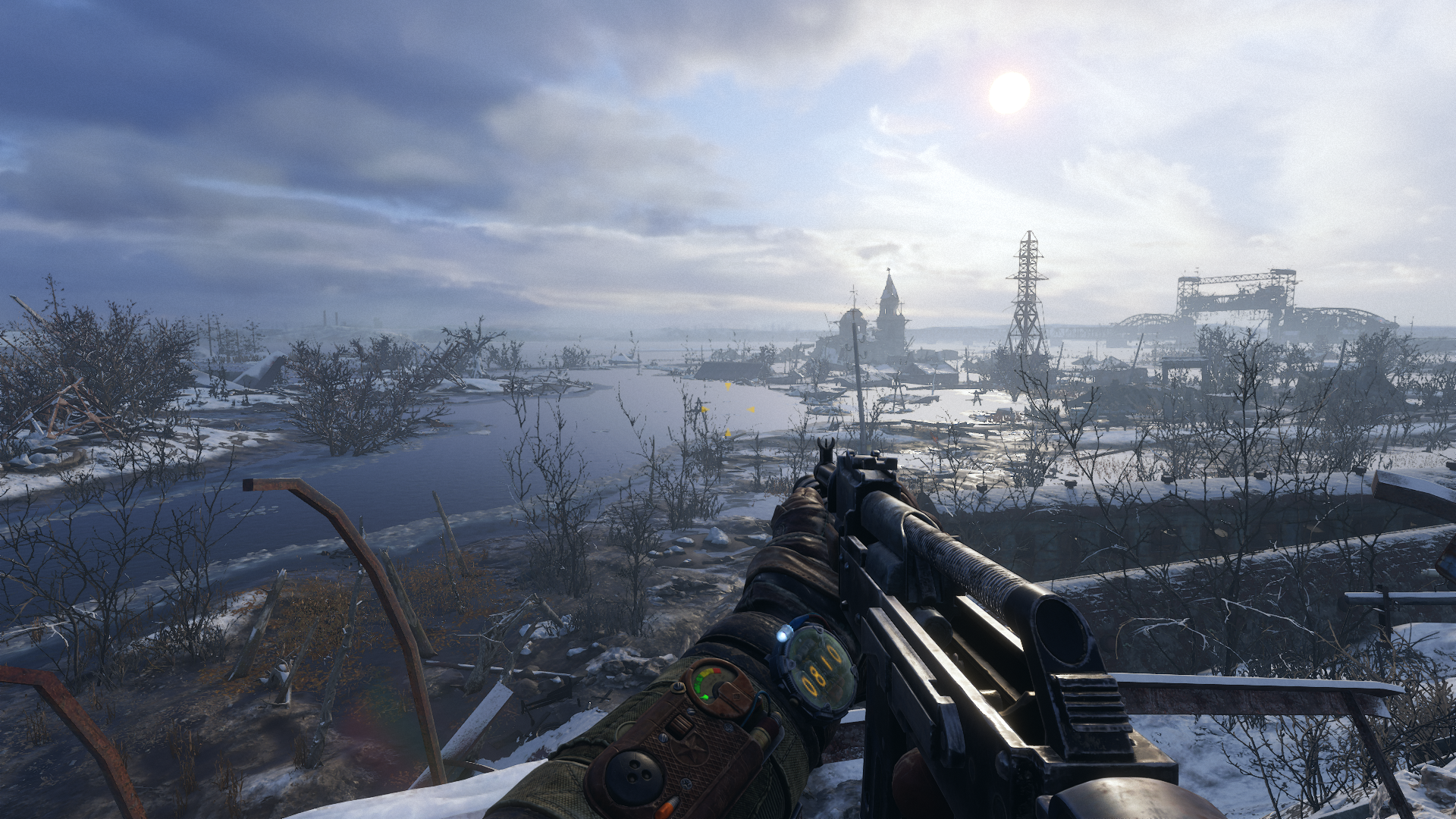 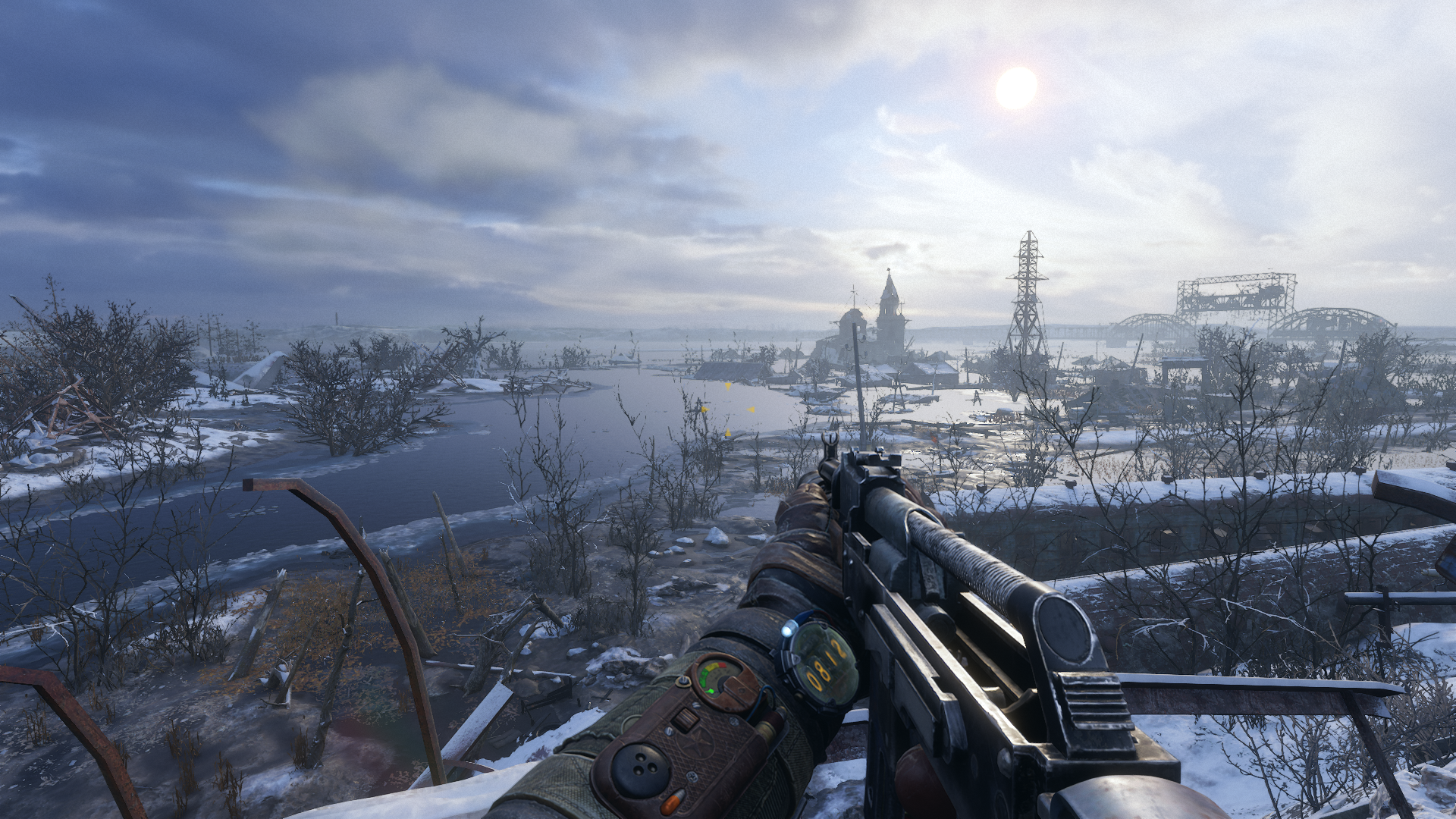 …and this is Medium quality with High ray tracing enabled.

Admittedly, that’s quite a drop in performance from their regular, non-ray traced speeds, which ranged from 63-109fps on the GTX 1660 and an even nippier 74-135fps on the 1660 Ti. However, as a sneaky peeky way of seeing whether ray tracing is actually worth all the hype and hullabaloo, at least it’s vaguely playable. I mean, sure, it’s never great when the frame rate lurches below 30fps at the best of times. But I’d argue the odd wobble to 27fps is definitely a lot better than the GTX 1070‘s rather more frequent lows of 25-43fps on the same settings, and infinitely preferable to the GTX 1060‘s even more regular potholes down to 20-33fps.

Of course, without those dedicated RT (or ray tracing) Cores you’ll find on one of the RTX cards, you’re not going to be able to manage anything more than Medium with the GTX 1660 and 1660 Ti at 1080p, and even Medium at 2560×1440 is out of the question here. At this resolution, neither card managed much higher than 26fps as I stuttered my way up the train tracks, so 1080p ray tracing is very much the upper limit of what’s possible on these particular cards.

As for Shadow of the Tomb Raider, ray tracing was once again very much within reach with these two cards. The GTX 1660 offered a boost of roughly 10fps over the GTX 1060’s ray tracing performance when I ran it through the game’s internal benchmark at 1920×1080 across a variety of different quality settings, while the GTX 1660 Ti produced pretty much identical results to the GTX 1070. 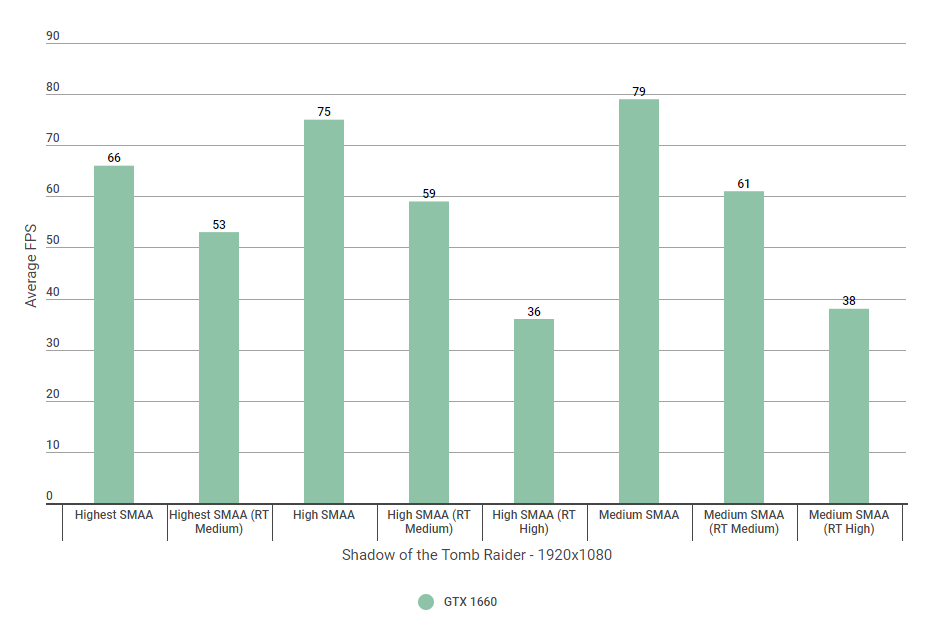 As you can see from the GTX 1660 graph above and the GTX 1660 Ti graph below, both cards are perfectly capable of handling the game’s Medium Ray Traced Shadow Quality without issue. The GTX 1660 still dipped to 35fps every now and again, with the GTX 1660 Ti’s lowest speed being 37fps, but it’s far from game-breaking. In fact, I’d even go as far as saying you could use this setting for a proper playthrough of Shadow of the Tomb Raider. 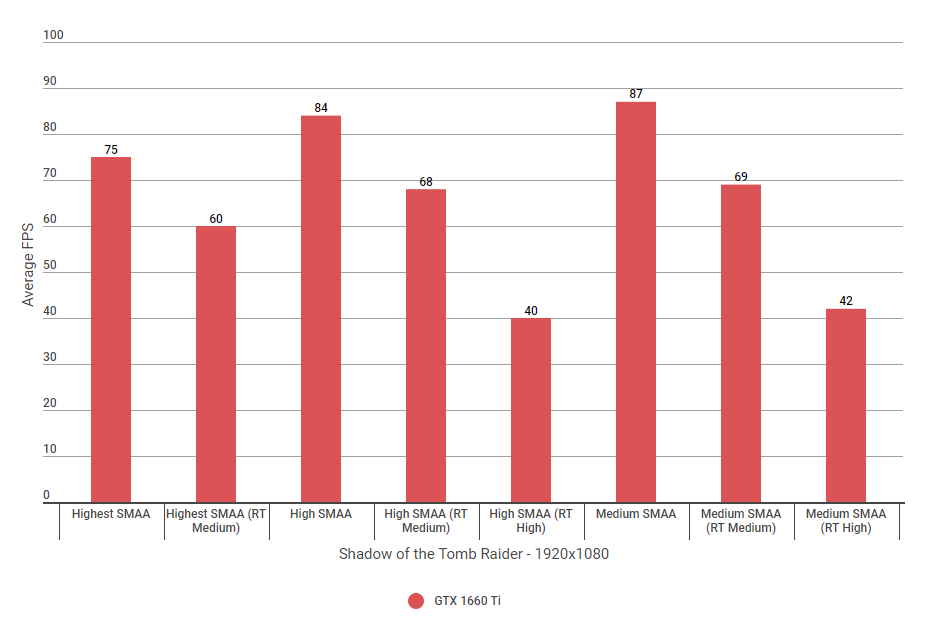 However, as I stated in my previous testing analysis, Medium ray tracing doesn’t really look that different to having no ray tracing enabled whatsoever. If you need reminding, go and look at the screenshots in that GTX ray tracing article to see what I mean. Instead, I’d argue the only way to really get an idea of what ray tracing is actually doing in Shadow of the Tomb Raider is to stick it on High or Ultra – and that’s where we start running into trouble.

For while the GTX 1660 Ti’s averages of around 40fps don’t look that bad on paper, what those average frame rate graphs don’t tell you is that some scenes dipped as low as 20fps in the game’s benchmark – particularly the dense jungle scene – putting right back into the same kind of unplayable territory as Metro Exodus, even on the game’s Medium quality setting. Again, it’s probably just about manageable if all you want to do is play around with the settings a bit to get a rough visual sense of what ray tracing actually looks like in this game, but it’s not a very practical speed to do a proper playthrough with. Instead, you’re probably better off sticking with Medium ray tracing, just like the GTX 1060 and GTX 1070.

This is a shame, as I was hoping the GTX 1660 and 1660 Ti’s new Turing GPUs might have given these cards a bit more of a leg-up in this respect. But alas, it’s clear you still need the proper RT Cores found on Nvidia’s RTX cards, such as the RTX 2060, to get the job done properly.

As a result, we’re not really in a much better position than where we were before with these cards. Sure, the GTX 1660 offers significantly better speeds than the GTX 1060, but with the GTX 1070 pretty much matching the GTX 1660 Ti frame for frame in a lot of cases, any one looking to get a proper ray tracing experience on a GTX graphics card will have to look significantly higher up the food chain to the GTX 1070 Ti and beyond if they want some more playable frame rates.

4A Games are working on the next Metro game, exploring multiplayer, and a new series