Overwatch has now been kicking around the multiplayer shooter scene for three years, although it feels like longer, thanks to the game’s constant barrage of seasonal updates and events. Blizzard are kicking off their anniversary celebrations with a trial week, so anyone still on the fence can try the game free here, and newcomers will get to try all of the notable event modes of the past few years, one a day. Players that log in during the anniversary event (running until June 10th) will get a free commemorative loot box, and hopefully come away with at least one of the new outfits. Below, an anniversary trailer.

Update: Along with the anniversary events, Blizzard have also rolled their modding-lite Overwatch Workshop mode onto the live servers.

Probably the biggest reason (beyond fashion) to log in during this event is the brawl playlist. Every day, a new mode, including the co-op Halloween Terror and Overwatch Archives scenarios, plus Christmas, Summer Games and Lunar Near Year events. You can see the full calendar here, starting today with the vaguely Rocket League-ish Lucioball, and getting spooky tomorrow with Junkenstein’s Revenge. Saturday through Monday should be the best point, though, as they’re running all three story co-op missions back to back; Uprising, Retribution & Storm Rising.

Not that fashion should be overlooked. Some good outfits this event, and some underwhelming ones too. D’Va’s schoolgirl outfit is just kinda eh, perhaps a little too similar to her existing, more casual get-ups. I am entirely here for Mei’s summery honeydew melon-themed look. Not exactly the most heroic outfit, I must admit, but it’s a huge departure from her usual heavy arctic gear. It’s just a pity that she’s still a stone-cold killer who will freeze you solid, then giggle coyly while she fires ice spikes into your head. Do not trust Mei, even if she’s on your team. 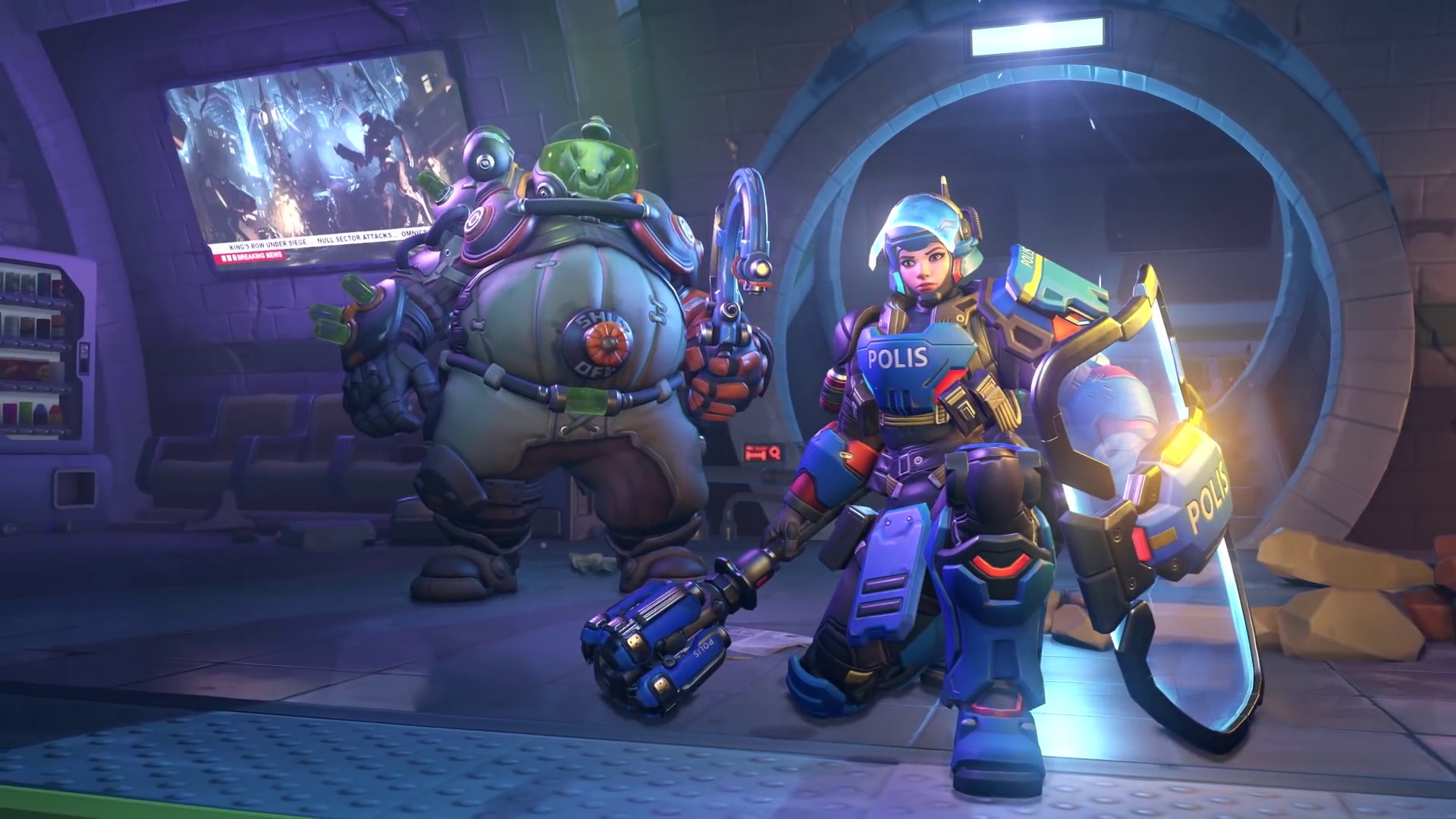 These two skins elicit almost entirely different reactions for me. On the plus side, I love Roadhog’s horrible skull-headed biohazard monster look. It looks like they’ve stuffed some kind of rogue SCP beast into an overstuffed hazard suit and (foolishly) expected it to fight for justice. On the other hand, Brigitte is no longer a cool rocket knight and has apparently become a riot cop – the worst kind of cop – and so is officially Cancelled. Or first to be devoured/dissolved by BioHog. 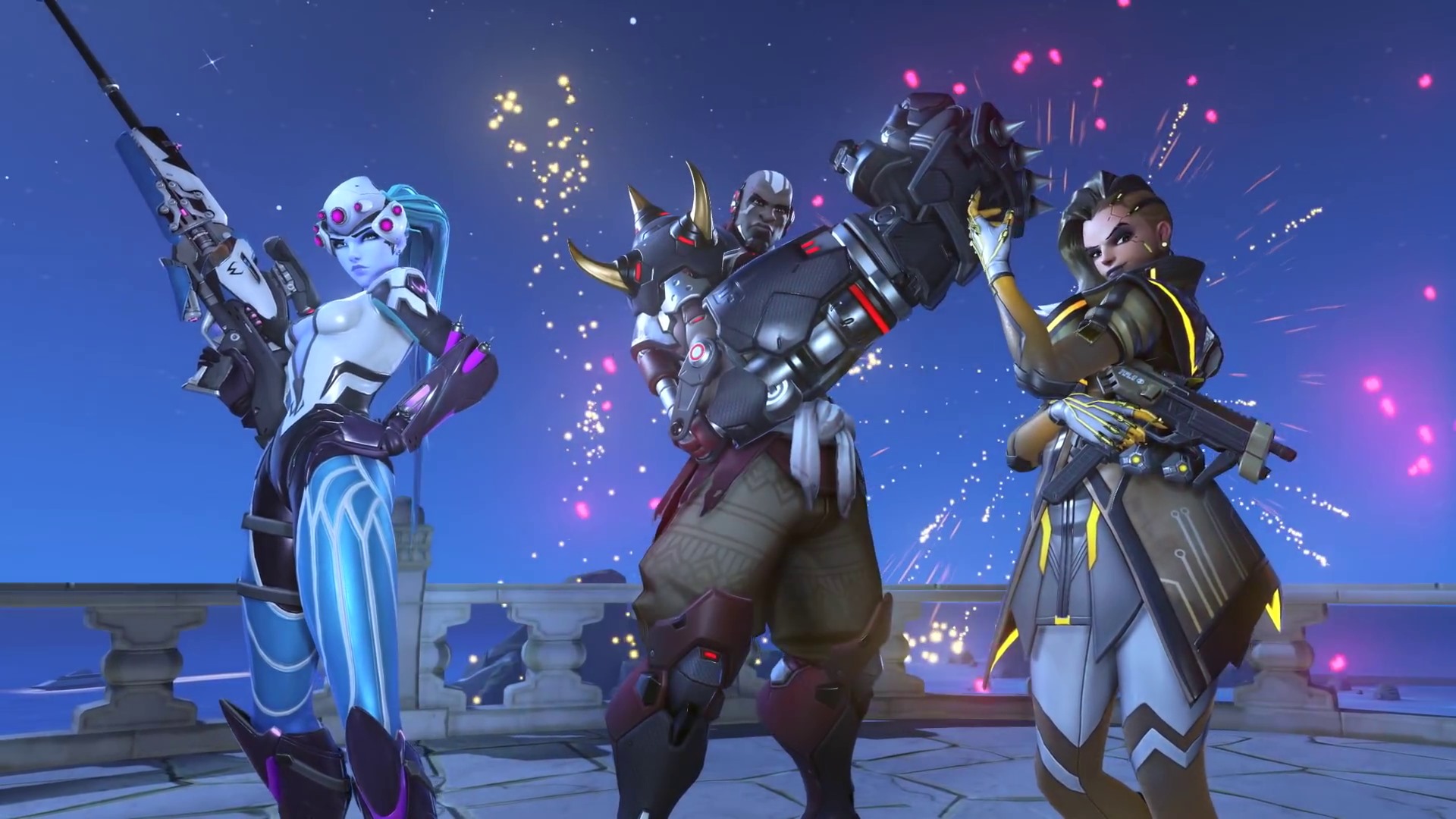 A trio of merely-okay alternate colours for Team Bad Guys. Widowmaker’s outfit would probably work a little better if much of it didn’t come close to matching her smurf-like skin tone. The black-and-red cyberware look does work nicely for Doomfist, though, and Sombra’s kit makes her look like she’s dressed up as some kind of far-future bee. Not bad, but far from the main (Mei’n?) event. 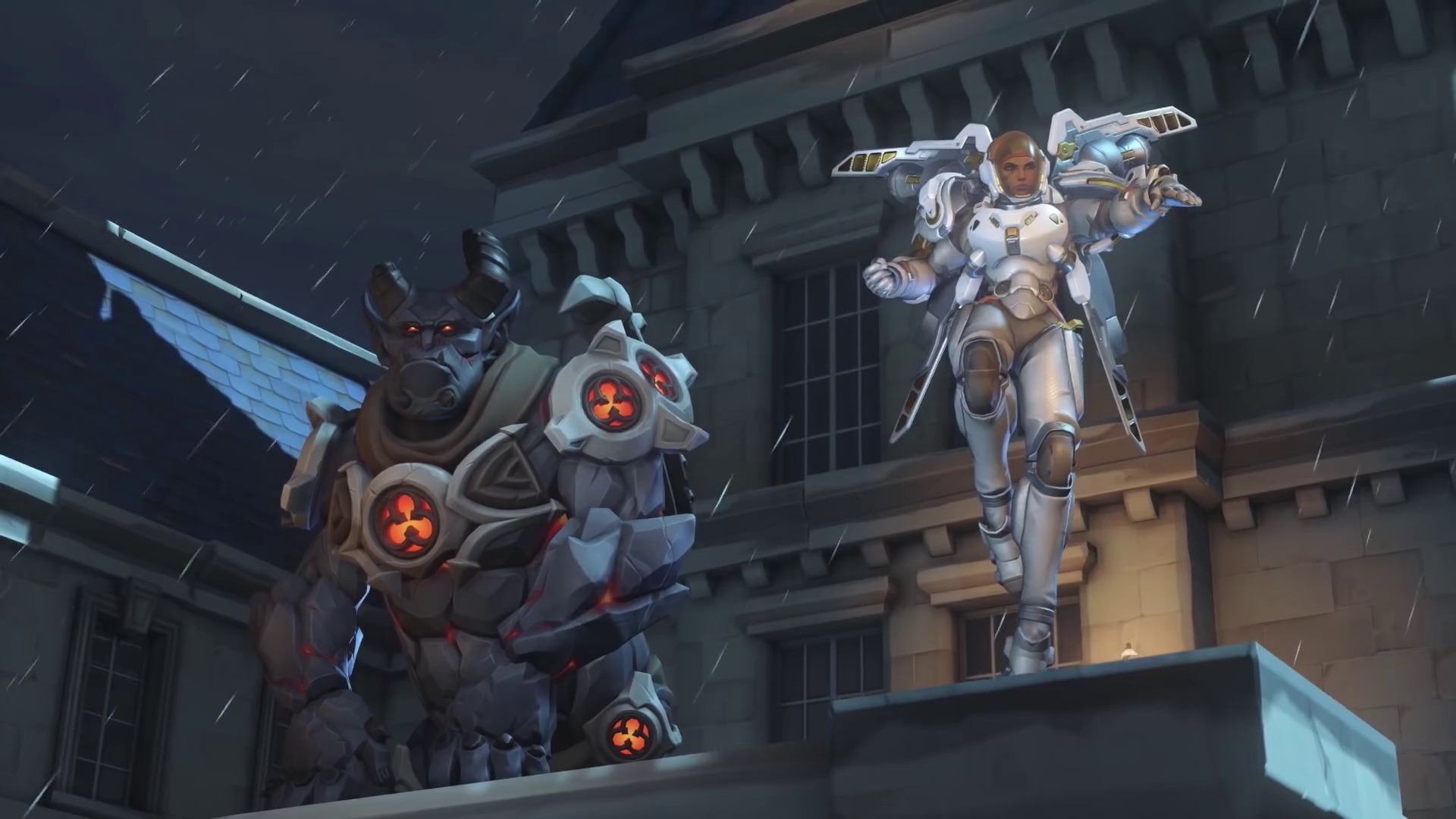 Two good looks here, though. Pharah is looking very professional in her space-flight capable suit, ready to shoot rockets at orbital villains at a moment’s notice. Winston steals the show, though, with his very Diablo-inspired gargoyle skin. He simultaneously looks like he’s fallen out of Disney’s most underrated cartoon, and like he’s ready to go ten rounds with Hellboy. Together, they fight magical space-crimes, I guess? Or at least pose dramatically on rooftops. When you look that cool, you might as well just pose everywhere.

Overwatch is free to try until May 28th, and you can snag it here. If you like it and want to stick around, it’s £17/€20/$20 on Blizzard’s store. The anniversary event runs until June 10th, and you can see details on the official page here.