There’s nothing quite so satisfying in Fortnite as landing a good headshot on a moving enemy from afar with a sniper rifle. But for so many players, it happens far too infrequently, because snipers are fickle guns which require great accuracy and timing to use well.

Well, our Fortnite Snipers guide is here to change that. Updated for v9.10 of Fortnite, we’ve got all the latest tips and tricks on how to use every kind of Sniper Rifle effectively and reliably, at any range and under any circumstances, from the Heavy Sniper to the Semi-Auto Sniper Rifle. 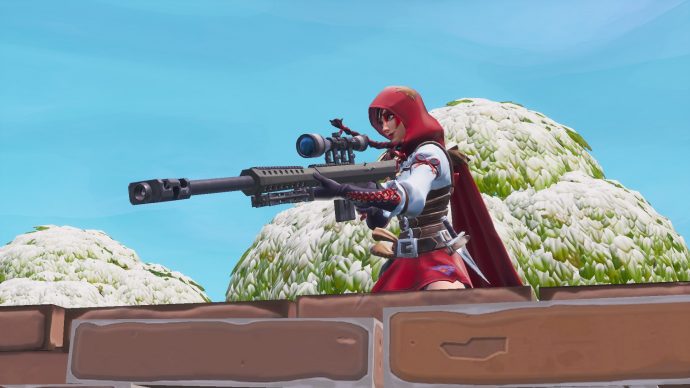 If you’re still getting to grips with Fortnite and its dizzying array of mechanics and controls, then look no further than our main Fortnite guide, where you can find absolutely tonnes of beginner-friendly tips and strategies, as well as links to all our other Fortnite guides, such as Fortnite week 6 challenges, Fortnite building and editing, Fortnite weapons, and much more.

Every sniper rifle in Fortnite behaves differently from the rest, but generally they all occupy the same niche in the Fortnite weapons roster: they are slow to fire and slow to reload, but they deliver fantastic damage across great distances. They’re also very importantly the only weapons in Fortnite that are not hitscan.

Hitscan is a term used in many first-person and third-person shooters. If a weapon is hitscan, then there is no bullet travel time; the moment you fire, your target is instantaneously hit, no matter how far away you were from them. Assault Rifles, Shotguns, Pistols, and SMGs are all hitscan – but snipers are not, which means you need to take into account a bullet’s travel time as well as how much the bullet will drop over that distance.

This makes snipers more difficult to use than other guns in Fortnite, but the ability to end a fight before it even begins with a single shot to the head makes them a very powerful class of weapon. While other guns have a 2x damage multiplier for a headshot, sniper rifles enjoy a 2.5x multiplier, which means the Hunting Rifle, Suppressed Sniper Rifle, and Heavy Sniper Rifle can all kill a player in a single shot to the head even at full health and shields.

Sniper aiming guide – how to use the Fortnite Sniper Scope

The lower half of the vertical line of your scope features eight evenly spaced bars, which can be used to calculate your distance from a foe. The best method for calculating this accurately is to position the enemy’s player model just under the central cross, and see how many bars fit into the model. Take a look at the image below for an indicator of the approximate distances for each bar. 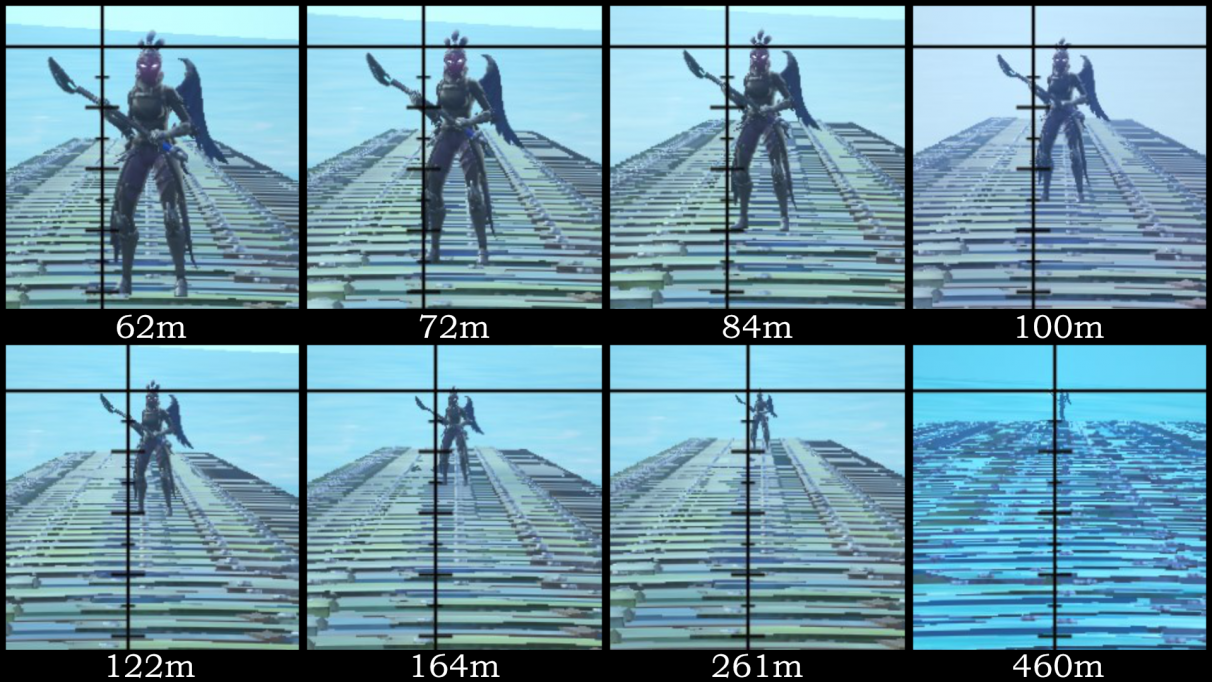 Click this image to view it at full resolution.

As a general rule of thumb, for targets closer than 100m, you don’t really need to adjust for bullet drop, because it’s such a short distance that the bullet won’t drop far. For distances beyond 100m, however, you’ll need to aim higher and higher above the target in order for the bullet to hit. Bullet drop is much more pronounced in Fortnite than in many other games such as PUBG, so if in doubt then aim higher, not lower.

Let’s take a look at the different types of sniper rifle available to you throughout a Fortnite match. For full details and stats on all the weapons, take a look at our Fortnite weapons guide.

The Semi-Auto was brought back from the vault in the v9.10 Patch Notes, to fill the void left behind by the vaulting of the Scoped Revolver and Thermal Scoped Assault Rifle at the beginning of Season 9. It’s meant to be a low-end sniper rifle, available only in Uncommon and Rare; and there are very few circumstances where you ought to pick up a Semi-Auto over any of the other snipers on this list.

The simple fact is that snipers are meant to be super-duper damaging, to make up for the hardship of its slow-firing nature, its non-hitscan nature, the fact that you have to scope in… And the Semi-Auto Sniper Rifle, while it has the fastest fire rate and highest mag size of any sniper, just isn’t powerful enough in many players’ minds to warrant its use beyond the early-game.

The Suppressed Sniper Rifle is the newest addition to the sniper rifle roster, having been added in V7.10 in Epic and Legendary rarities. The Suppressed Sniper is similar to the recently vaulted Bolt-Action, with very slightly reduced damage and a very slightly quicker reload time, but its suppressor alone turns it into an extremely deadly sniper rifle worth taking to the end of a match.

All suppressors in Fortnite are equally effective, meaning the Suppressed Sniper Rifle cannot be heard more than 45 metres away, just like the Suppressed Assault Rifle or Suppressed Pistol. And seeing as one of the main drawbacks of sniper rifles as a whole is its noise, which tends to attract players from all around and immediately alerts your target as to your location, the Suppressed Sniper is a very powerful gun with which you can one-shot a player from afar without attracting any unwanted attention.

Available in Uncommon and Rare varieties, the weakest sniper rifle in terms of flat damage is actually the favourite weapon of many a seasoned Fortnite player. The reason for this is its speed; the Hunting Rifle’s reload speed is about a second less than the Suppressed Bolt-Action, and about half that of the Heavy Sniper Rifle. This makes it very useful in sniper duels for “pre-firing” – aiming where you think your opponent will reappear from behind their cover, and firing before they actually reappear on the off-chance that they will reappear in the time it takes for the shot to reach them.

The Hunting Rifle is also the only rifle on this list that does not have a scope, instead relying on a zoomed-in ADS (aim-down-sights) approach. While a scope is generally preferable for extreme distances, the absence of a scope on the Hunting Rifle makes it a less clunky option that doesn’t limit your peripheral vision as much as its rivals. And if you can hit your shots without a scope, you’re not really going to miss it.

The Heavy Sniper Rifle is the most highly sought-after sniper in Fortnite. Available in Epic and Legendary varieties, this powerhouse can deliver a whopping 150 damage to an opponent’s body, let alone their head. So you can often one-shot a player even if you don’t headshot them- though of course, a headshot would guarantee the kill. To balance against this, the Heavy Sniper features a very high reload time and also a longer “draw” time than the others – meaning it takes longer to switch to a Heavy Sniper than a different kind of Sniper Rifle.

But the most interesting power of the Heavy Sniper Rifle is its ability to destroy any structure – even metal – in a single shot. This makes it ideal to be used in conjunction with another weapon such as a Hand Cannon or Assault Rifle. You can shoot out an enemy’s cover, then quickly switch to your other weapon and land some shots before they have time to recover.

Now that we know the different types of sniper rifle in Fortnite and how they all work, let’s take a look at some general tips and tricks on how to improve your sharpshooter skills and win those sniper duels in a match.

That’s all we have on Sniper Rifles for now – hopefully you can take these tips and pointers with you into your next match and land some headshots on your way to the final circles. As we all know, Epic Games is constantly updating Fortnite’s weapons, so be sure to check back here for all the latest tips and tricks on improving your Fortnite sniper skills.