Playing a Total War game has always been a bit of an uphill battle on PC. With their detailed maps and densely-populated armies, they’re some of the most graphically-intensive games around today – and if you’ve read any of the graphics card reviews I’ve done here at RPS, you’ll know that Total War: Warhammer II is one of the regular games I use for benchmarking. Well, now we have a new big Total War in the form of Total War: Three Kingdoms, and man alive it’s one fierce opponent on the old graphics performance front.

But worry not, PC foot soldiers, as I’ve gone and hurled every last one of today’s best graphics cards (plus a couple of oldies) into battle to see what kind of performance you can expect from Total War: Three Kingdoms, as well as how to get the best settings possible to help bring that elusive frame rate of 60fps within reach. Together, we are stronger. Now we fight!

Just before we charge into hundreds of very sharp spears, though, let’s remind ourselves of Total War: Three Kingdoms’ PC requirements. As you can see below, Creative Assembly have outlined a number of different recommendations this time, but you’ll still need a pretty beefy system to hit that 60fps sweet spot. Their minimum specifications, for instance, is only expected to produce around 25-35fps on both the campaign map and battle scenarios on Low graphics quality at a resolution of 1280×720.

Their recommended spec, meanwhile, is aimed at those playing on High at 1920×1080, which Creative Assembly says should give you a frame rate between 45-55fps in the above scenarios. To get a solid 60fps on Ultra settings at 1920×1080, however, you’ll need that bottom specification – although if my results are anything to go by, I think you’ll also be able to get away with having a Core i5 / GTX 1070 system if Ultra settings are an absolute must for you.

Click the links below to see how each graphics card fared. For the record, my PC had an Intel Core i5-8600K and 16GB of RAM inside it, plus all the latest graphics drivers and Windows 10 updates installed.

As always, the aim here is to get you playing Total War: Three Kingdoms at 60fps at 1920×1080, 2560×1440 and 4K. That’s a pretty tall order for some graphics cards, but the good news is that Creative Assembly have put a lot of work into making the game more performance-efficient this time round, particularly when it comes to their frame-melting anti-aliasing effects – the stuff wot makes all those sharp edges and pointy weapons look like proper, solid lines instead of jagged, pixellated staircases – but more on that in a sec.

To test each card, I use the game’s built-in benchmarking tool, specifically the battle benchmark. This simulates a massive fight between two opposing clans, showing each army rushing across a wide, open plain surrounding by forests and tall mountains while chucking massive great fire bombs at each other in between volleys of arrows. There’s a lot going on, and it’s a good test of how well your PC will cope with the game’s big fights.

There’s also a campaign benchmark that comes with the game, which sees the camera swooping through a simulated campaign map, but I found the average frame rates it spat out were roughly the same as what I saw over in the battle benchmark. As a result, the speeds I’ve laid out in the links above should be broadly representative of what you’ll see in both types of scenario.

Total War: Three Kingdoms PC graphics performance: How to get the best settings

I stuck with the game’s four main quality presets (Low, Medium, High and Ultra) during my testing, but as you can see from the image below, there are plenty of options available in the Graphics settings menu’s Advanced tab to help improve your PC’s performance if you’re finding it’s struggling to keep a steady frame rate (click to expand).

If you’re struggling to get a steady frame rate, there are plenty of settings available to help you get the best performance.

Interestingly, Texture Quality is always set to Ultra regardless of whether you’re playing on High, Medium or Low, but the rest of the game’s settings all drop down accordingly with their corresponding preset. This helps maintain a certain level of quality when you’re getting stuck in with Total War’s big battlefields, but I’d argue that other settings such as Terrain Detail and Grass Detail are just as important when it comes to keeping Three Kingdoms looking its best.

As you can see below, for example, the game’s Low preset looks like your warriors are charging across a field of Vaseline when the camera’s zoomed out, which just looks a bit odd when all your soldiers are detailed up to the nines. Sure, skimping on environmental details like this allows the frame rate to stay nice and high, but it’s far from ideal. Medium is better, but that, too, is verges on looking a little underwhelming at times, especially with its reduced unit sizes. As a result, I’d say Medium is probably the minimum quality you should be aiming for here. 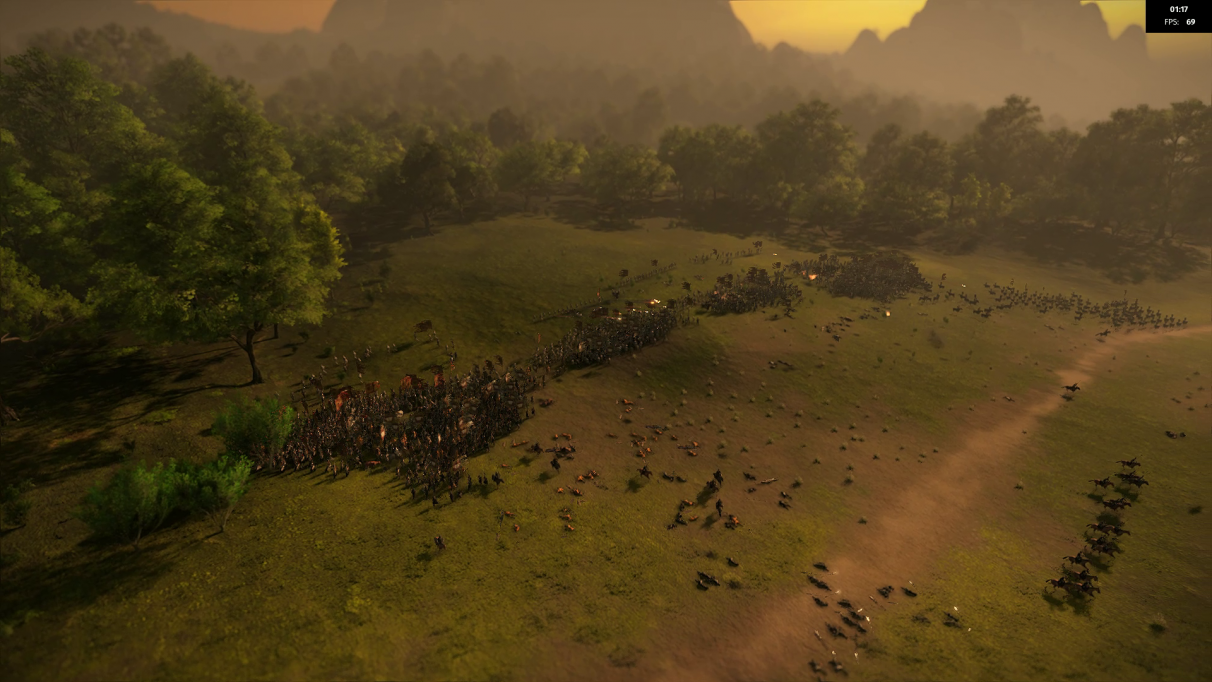 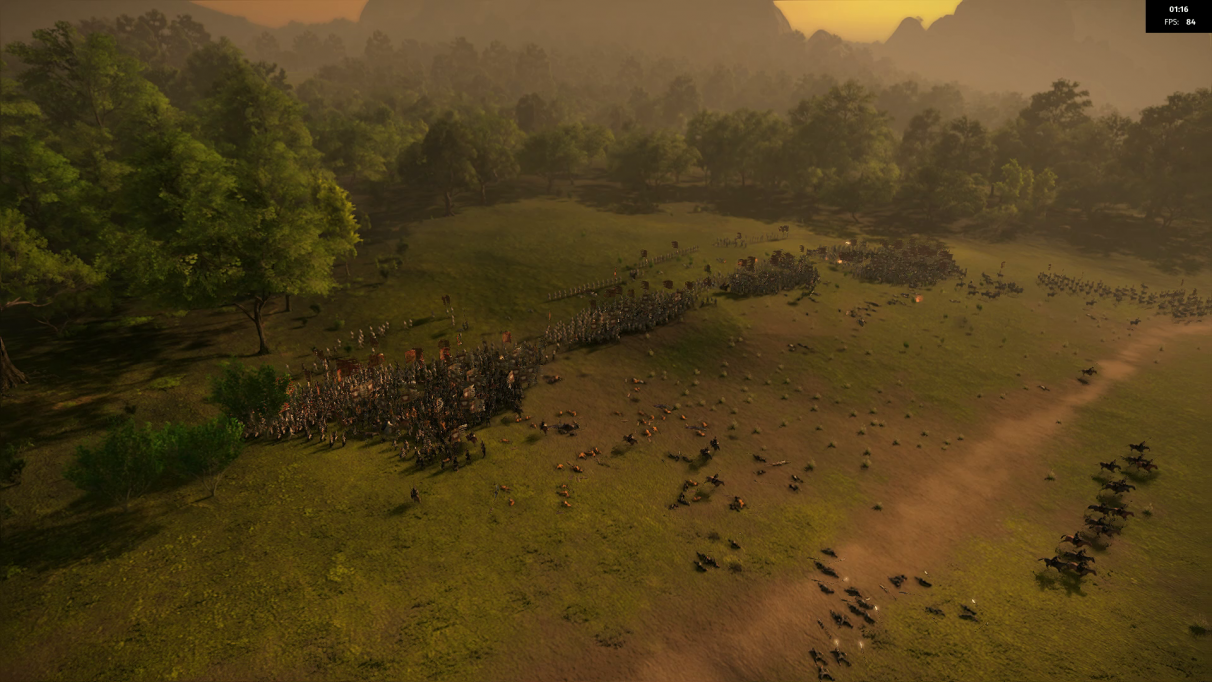 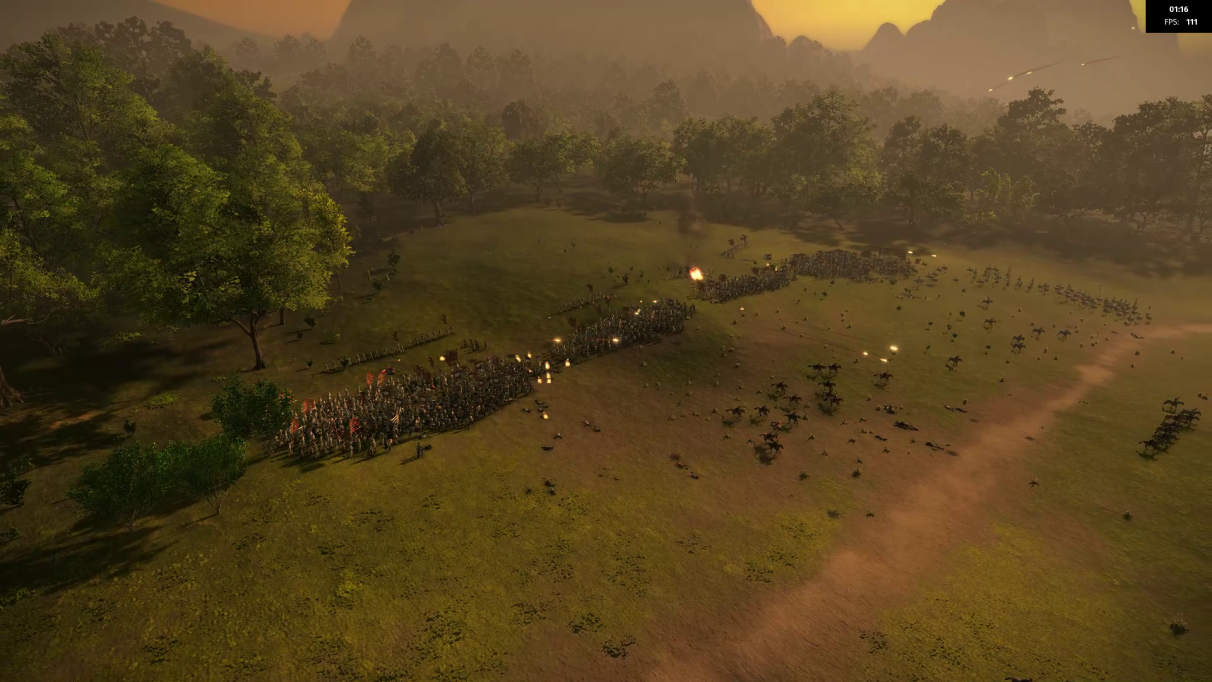 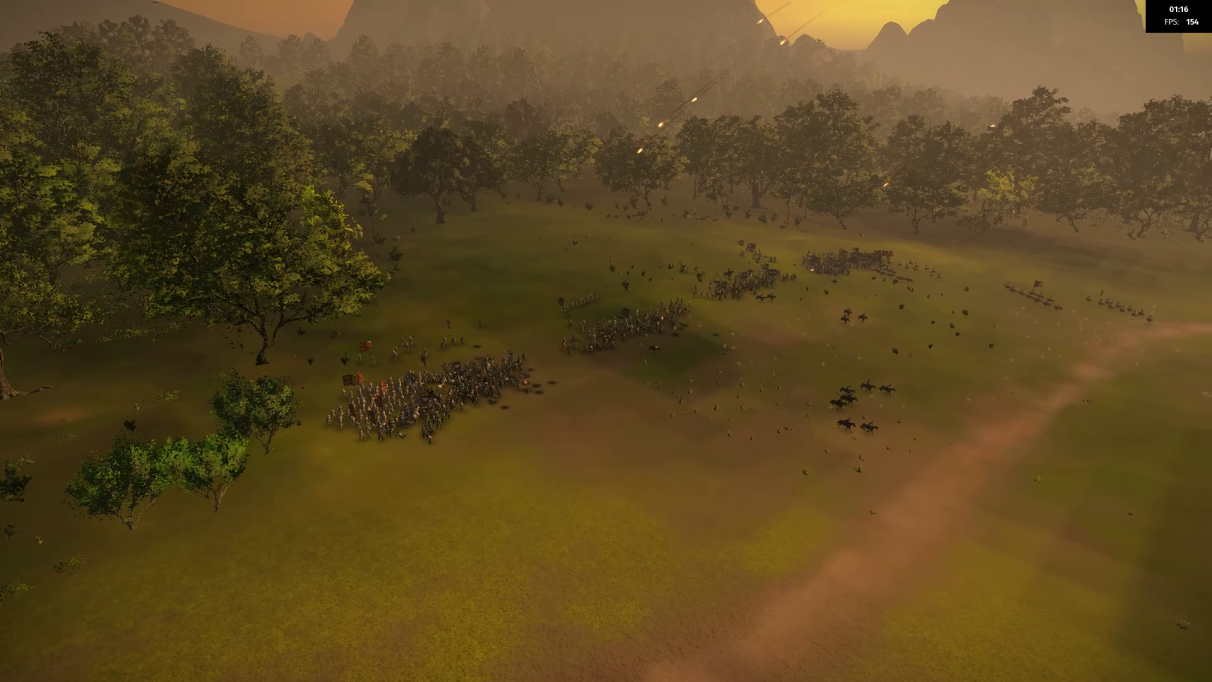 Fortunately, all but two graphics cards I’ve tested (Nvidia’s GeForce GTX 1050 Ti and AMD’s Radeon R9 270) were able to run Three Kingdoms at 60fps on Medium at 1920×1080 without much trouble at all. The GTX 1050 Ti wasn’t far off 60fps, all told, but the R9 270 really had a bit of a tough time with it. As a result, older graphics cards of a similar vintage to the R9 270 may well have to make do with running the game at lower resolutions in order to push into higher quality settings.

High and Ultra settings, on the other hand, are likely to be where the real battles will be fought in Three Kingdoms, as it wasn’t until I got up to the GTX 1660 that I started to see a consistent 60fps average on High. For 60fps on Ultra, you’re looking at either the GTX 1070 or RTX 2060. As such, this is where I’ve focused most of my attention – how to get the best settings on High and Ultra without compromising too much on what makes those settings so pretty.

The biggest thing you can do is to set the Anti-aliasing to FXAA. Creative Assembly said in their PC requirements article at the top there that they’ve made great strides with their frame rate-guzzling anti-aliasing tech this time round – so much so that they’re calling their top-end TAA (or temporal anti-aliasing) setting their ‘headline technical feature’. It’s “very performance-efficient and looks great,” according to Creative Assembly, and it’s allowed them to drop their multi-sample AA (or MSAA) altogether. Their “most performance-efficient” AA, however, is their fast approximate, or “FX” AA – and it really does show.

It may not be “as visually clean as TAA”, say CA, but when dropping down to FXAA saw a boost of almost 10fps when I re-ran the battle benchmark with my GTX 1060 on Ultra at 1920×1080, I think I’ll take those slightly ‘dirtier’ lines, thanks – especially if it means an average frame rate of 51fps instead of 43fps.

Switching off SSAO also helped push that figure even higher – up to a near-perfect average of 58fps, with highs of 67fps and lows of just 52fps. That’s a pretty decent gain, if you ask me, and lowering the Texture Filtering to Anisotropic x8 will nab you another extra frame to push the average to 59fps, too. That’s pretty much the same speed I got on the default High setting at 1920×1080 – and that’s without compromising on any of the other environmental details, too. 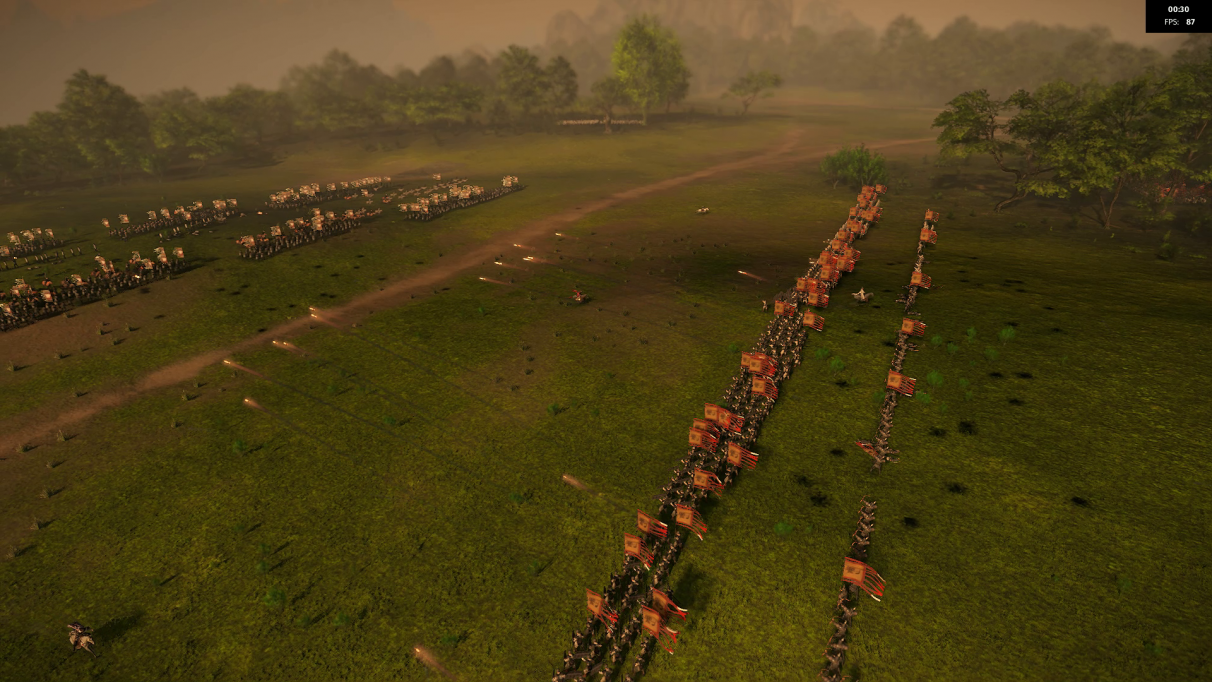 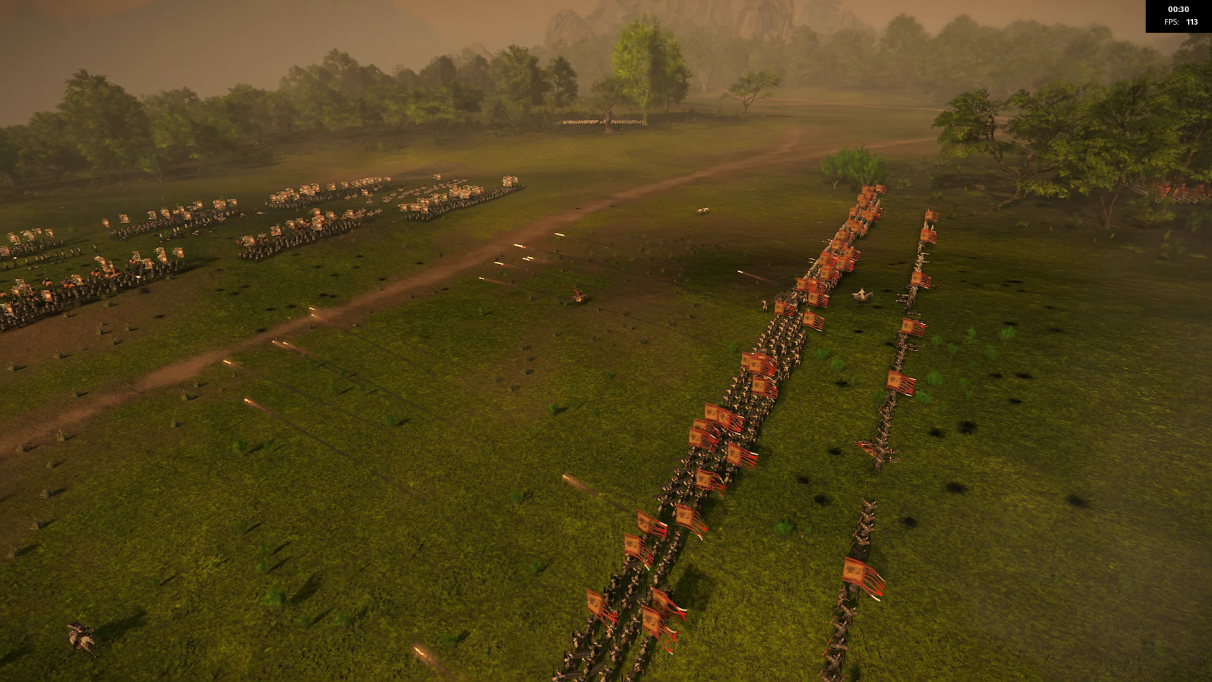 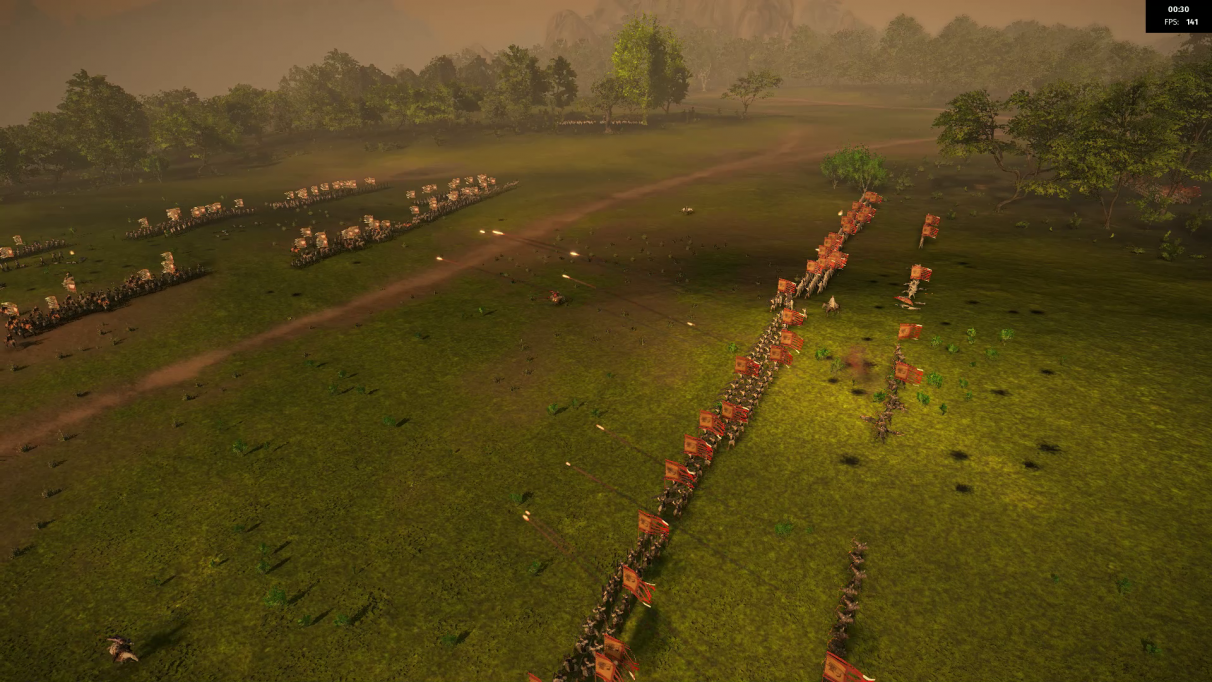 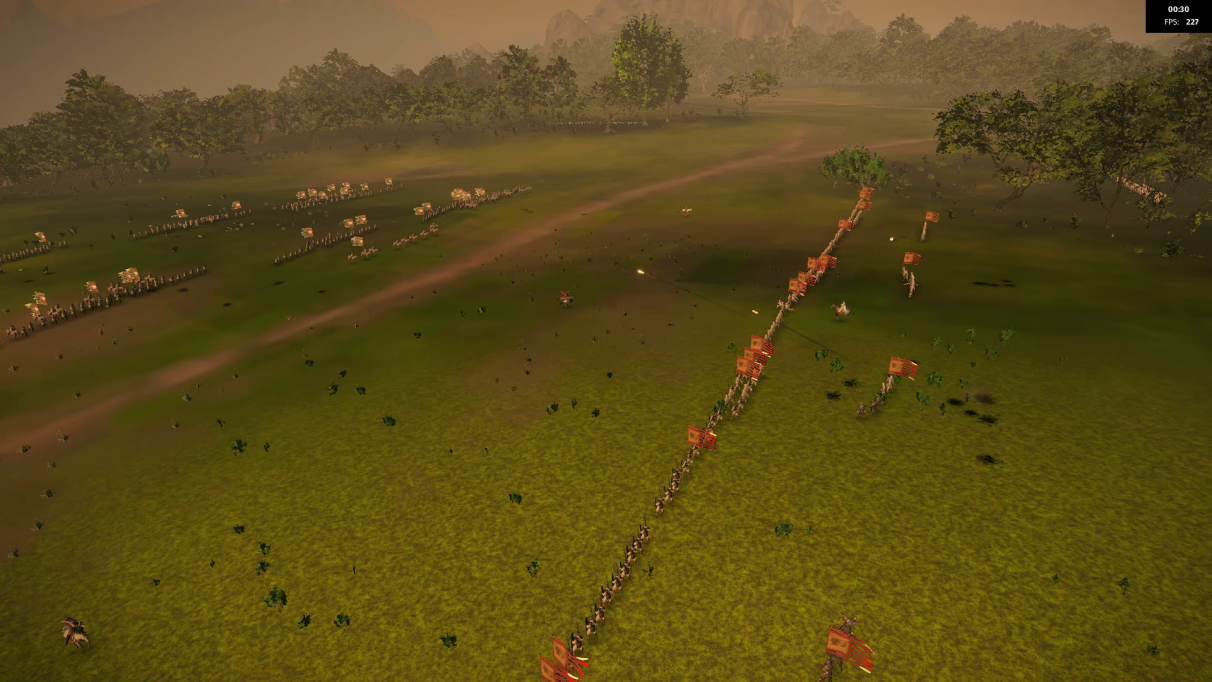 Lowering the size of your units can increase performance further down the scale, but battles also look a lot less dramatic as a result.

Unfortunately, only the FXAA trick can be applied to the other quality presets, as SSAO is already turned off on High, and its Texture Filtering is set to just Anisotropic x4. I still saw a 9fps boost simply by switching to FXAA, which brought my GTX 1060’s average 1440p High frame rate up from 36fps to 45fps, but that’s still not quite as sexy as something in the mid-50s.

Dropping the Texture Filtering down to x2 didn’t help much, and neither did changing the unit size from Large to Medium, or lowering the overall Texture Quality, so you might as well keep those as is and enjoy the sight of those jumbo-sized armies. Instead, the only other thing that produced the same kind of bump as switching off the SSAO was turning off Screen Space Shadows. This eked out another handful of frames to bump my average up to 49fps at 1440p, with highs of 56fps and lows of 43fps.

You can also drop the Grass or Terrain Detail down a notch to Medium to get another couple of frames, but the best average frame rate I saw here was 51fps – which isn’t really that much different from keeping either of them on High. After that, the gains get pretty small. Disabling Sharpening, Proximity Fading and Vignette got me another 1-2fps, for example, but the difference was so small they’re hardly worth bothering with.

As a result, I think that’s probably going to be your lot on High – unless, that is, you don’t mind making do with a bit of Resolution Scaling, which can be found on the Main Graphics setting page (pictured above). This essentially runs the game at a percentage of your desired resolution – say, 90% of 1920×1080 – and then upscales it to that original resolution.

I’ll be upfront. Enabling resolution scaling at 1080p does look a bit rough at the end of the day, but at 1440p it was a lot less noticeable. Running at 90% with FXAA and no screen shadows enabled at 2560×1440, for example, took my frame rate up to an average of 55fps, which is pretty all right in my books, and way better than my original High figure of just 36fps.

Otherwise, you’re probably going to have to bite the bullet (or should that be butterfly sword?) and settle for Medium, which already has FXAA enabled by default.

But enough talk about settings. Let’s charge over to some of them there graphics cards. Just click the page numbers below or hop back up the page to the card of your choice.

Katharine writes about all the bits that go inside your PC so you can carry on playing all those lovely games we like talking about so much. Very partial to JRPGs and the fetching of quests.

Total War: Three Kingdoms next DLC is a prequel

Games to grow with