I wince when people dismiss bad films as “just a load of CGI-heavy garbage”, because I know people who work in the visual effects industry. Thanks to their harrowing anecdotes, I know just how much talent and graft goes into making blockbusters look pretty, and so I always feel bad when their efforts get sidelined as a footnote to an utter roaster of a flick.

Given this, it’s going to be particularly painful to write what I’m about to write about Vambrace: Cold Soul, a JRPG-styled roguelite released this week by South Korean studio Devespresso Games. Because while the game itself is about as much fun as eating raw eggs out of a loaded gun with a toothpick, it’s absolutely gorgeous.

The game’s lead artist, Minho Kim, deserves nothing but praise. While the game’s visual format leans heavily on Darkest Dungeon, setting up four-versus-four confrontations in side-scrolling corridors, Vambrace enjoys an art style just as consistent and visually distinct as DD’s own homage to Mike Mignola, or The Banner Saga’s tribute to Eyvind Earle, the man who defined the look of 1950s Disney.

It’s clean and painstakingly handcrafted, with superbly chosen colour palettes, striking linework, and cracking use of lighting effects to bring life to grisly, glowing ghosts. The frigid city of Icenaire, where the action takes place, is as evocative and characterful as any 2D environment I’ve come across: when your party staggers into an abandoned, ice-clogged theatre, you can almost feel the cold and smell the mildew. I love that. 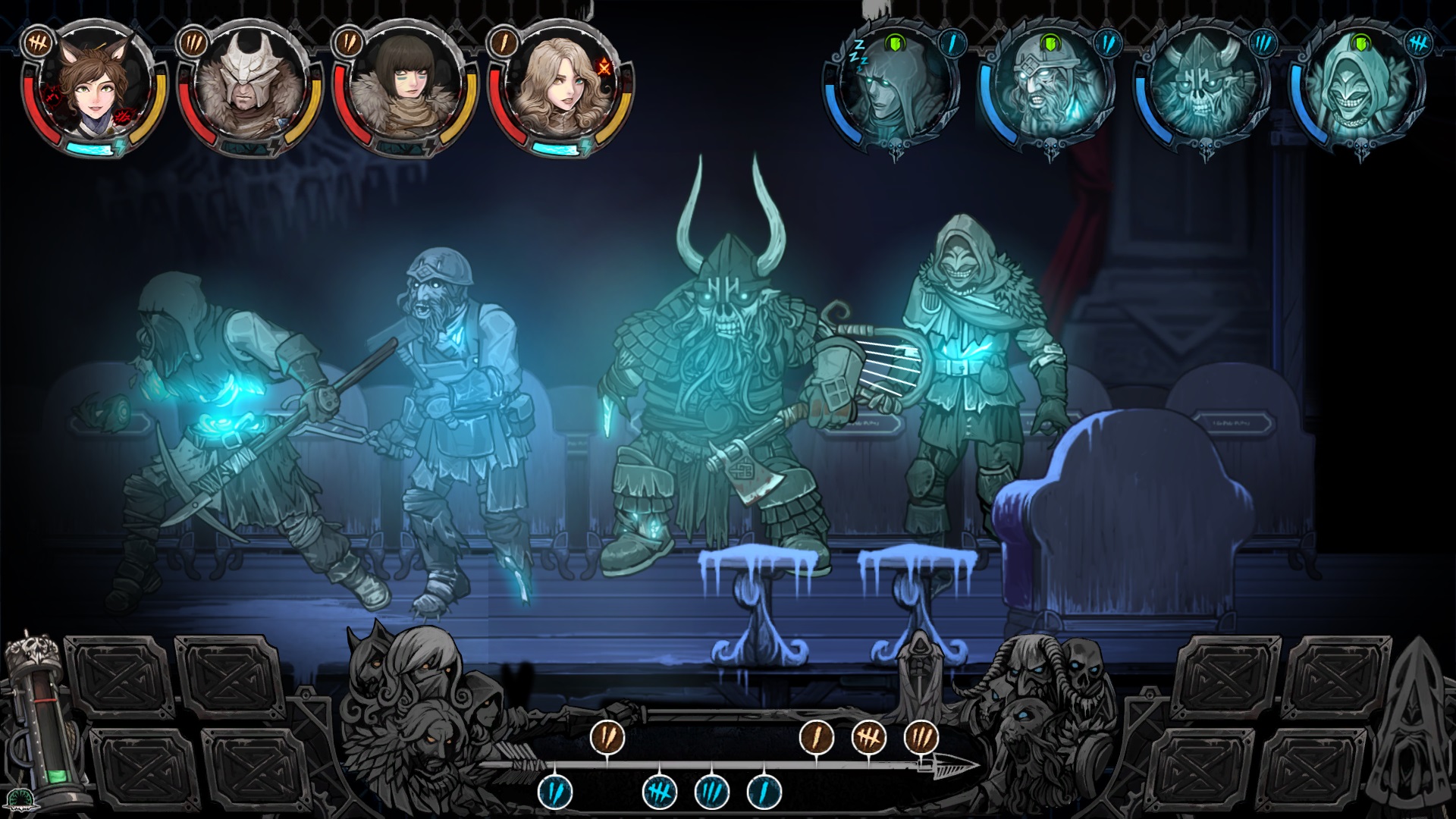 Look at the pretty ghosts!

Admittedly, the character design does let things down a little. It’s all a bit… horny, with every NPC looking like a pin-up, and the entire female cast – even those in plate armour – sporting titanic, groaning bosoms. But it seems a bit harsh to call the game out for this, when the whole tradition of fantasy art has a chronic problem with the male gaze. (Here’s an area where Darkest Dungeon generally excelled, by the way: despite her being a vagrant clad in a filthy coat and a saggy witch hat, I developed the weirdest fucking crush on the Grave Robber). 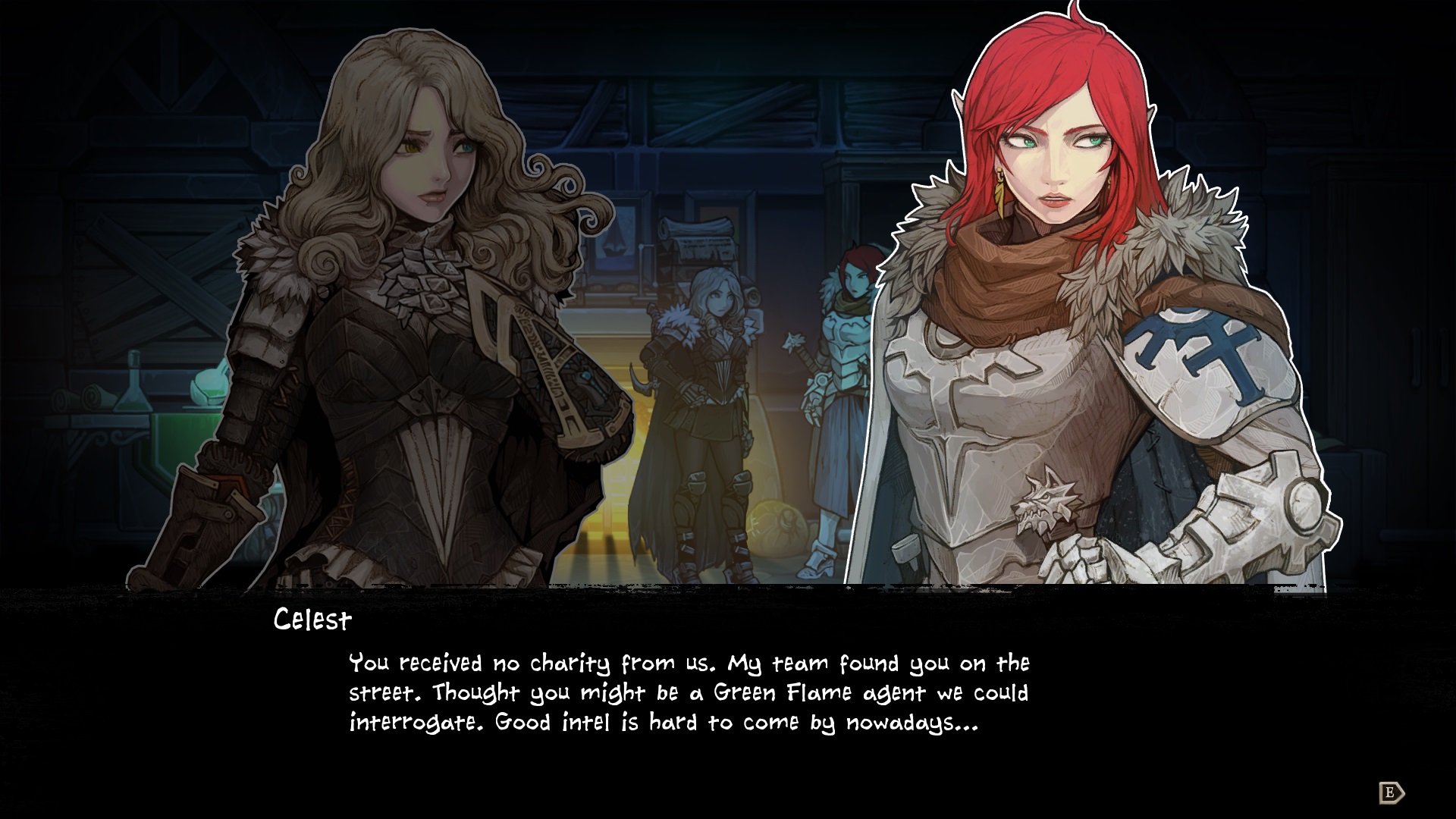 And if you were sent Vambrace’s backstory as a prelude to a D&D session, you’d be well pumped up: the grand city of Icenaire has been hit by a magical cataclysm and sealed off from the world by a dark lord of some kind, with its streets plunged into Frostpunk levels of cold. All its inhabitants have died and become mad, vicious ghosts, with a few survivors holding out in a beleaguered undercity called Dalearch.

That’s where you, Lyric, a woman with heterochromatic eyes and a chest like two beluga whales surfacing from a pool of milk, have arrived, having made it through the dark lord’s barrier thanks to the power of your magical arm guard (the titular Vambrace). Inevitably, it falls to you to sort things out. It’s a great setup! 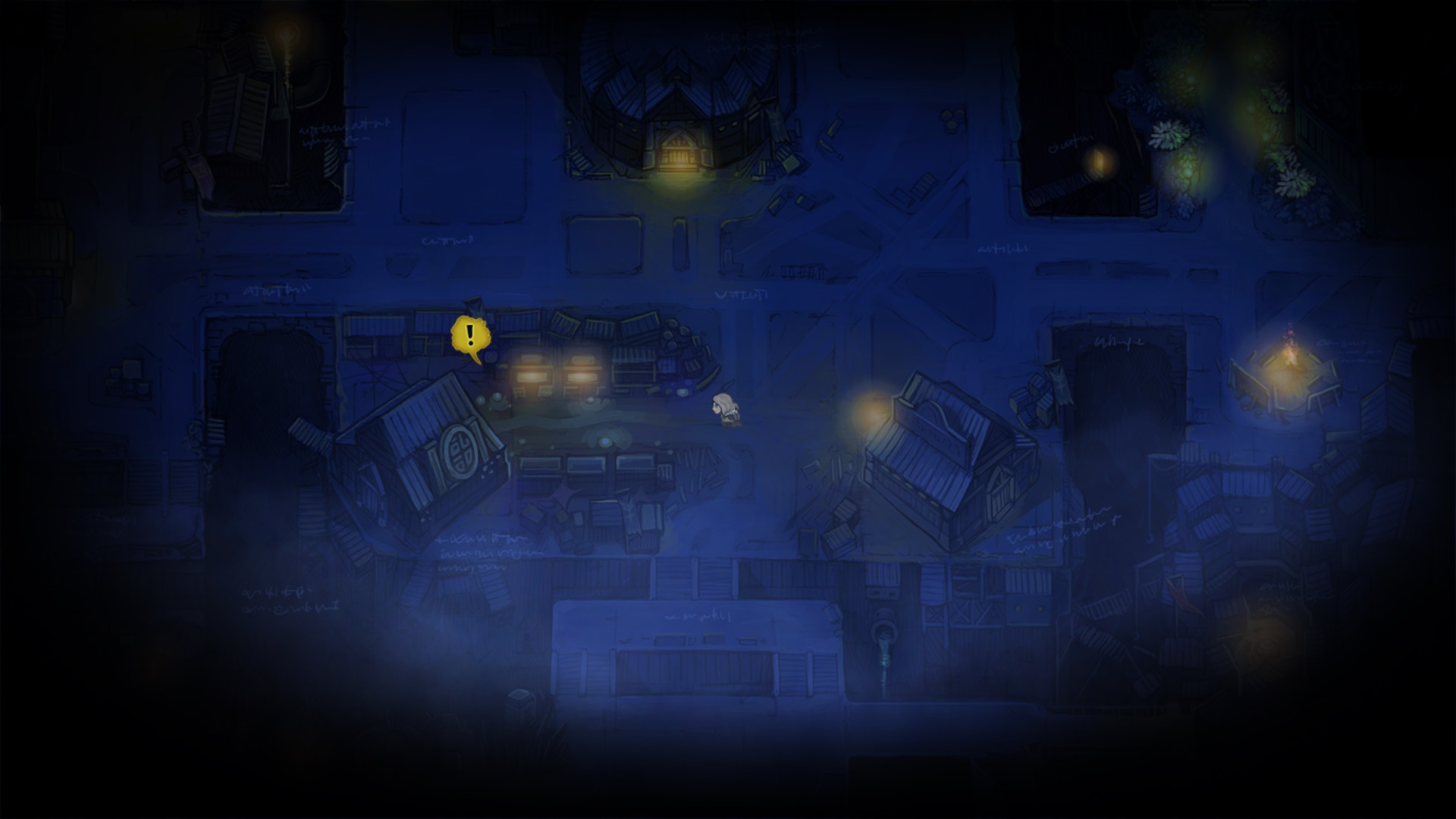 Lyric explores Dalearch via a cute, very JRPG-ish overworld map. There are many exclamation marks to deal with.

But that’s where things get rubbish. You see, before you can go out on your first mission, there are heaps of dialogue encounters to get through. It’s plain to see how Devespresso have tried to build some JRPG heritage into Vambrace here, and that’s fine. It’s well written and compelling, too. But it sets you up for a pace and style of game that fails to materialise.

Once you gather your party and take them into the world, it’s into a meatgrinder of poorly-explained mechanics, tactically limited combat, and needlessly high difficulty. I’ve read that the pre-release build was made a little easier after reviewer feedback, but even so, I died so relentlessly in the opening mission that it would need a pretty huge tweak to be enjoyable.

The game’s marketing tries to sell this under the broad roguelike ethos of “losing is fun”, going so far as to say on the game’s Steam page that it’s especially for masochists. But masochism is a broad church. If Slay The Spire is being expertly lashed by a statuesque beauty, Vambrace is like being clubbed over the head by a morose ogre wielding an iron girder.

The game’s dungeon maps make a pig’s ear of translating linear corridors into a top-down diagram, so it takes a lot of practice to even know where you’re going. Companions can’t be levelled up or developed, and so are complete cannon fodder, while Lyric herself can never die, being revived back in town when your team is inevitably wiped. Eventually, you start to feel like a WW1 lieutenant cursed with immunity to bullets, endlessly leading groups of fresh-faced tommies into no-man’s land to die. 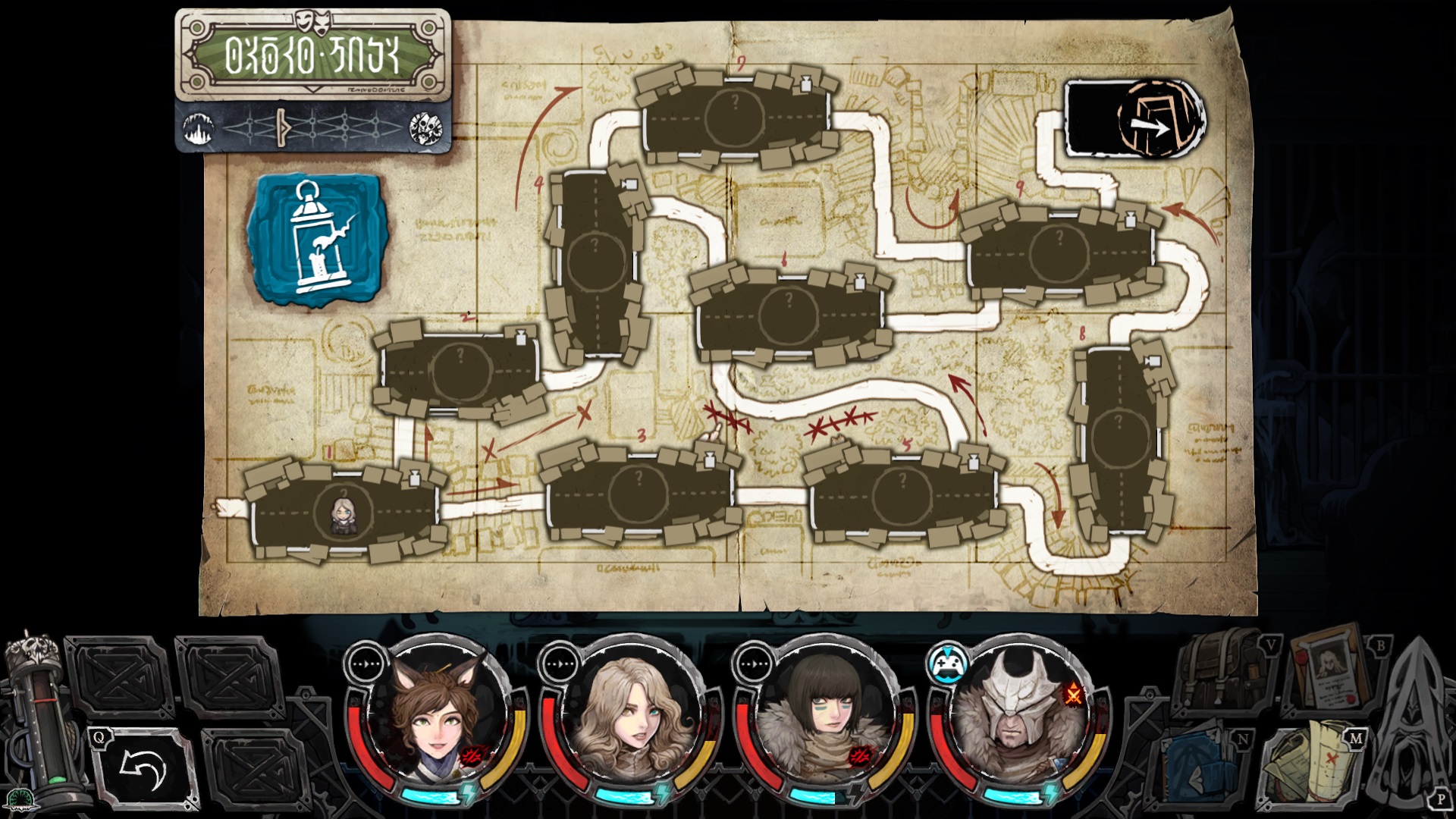 It is very, very disconcerting trying to use this map to navigate encounter areas which are viewed from the side.

As for the fights themselves, they’re essentially meaningless. Although the four-versus-four configuration of Darkest Dungeon is there for all to see, all the depth and complexity has been stripped out of it. Bashers go at the front, shooters go at the back, and if you put them in the wrong place (or can’t recruit two bashers and two shooters), they can’t do anything. Party members can perform a single attack, a block, or a super duper attack that takes time to charge. That’s it.

The game doesn’t give a lot of feedback as to what’s going on, or give you much leeway to affect it (there’s no healing in combat, nor spells/buffs to cast) so once a fight begins, you essentially keep mashing the “hit” button and hope the dice roll in your favour so the bad guys die first.

Disclosure: I didn’t play very far into the game at all, because I was endlessly doing the same thing and not enjoying it. But from everything I’ve learned from people who have gotten further in, this situation does not change. To the best of my knowledge, it isn’t the case that early, basic combat gradually becomes more complex and tactical. It seems you just get better kit to give to your party, increasing their survivability. 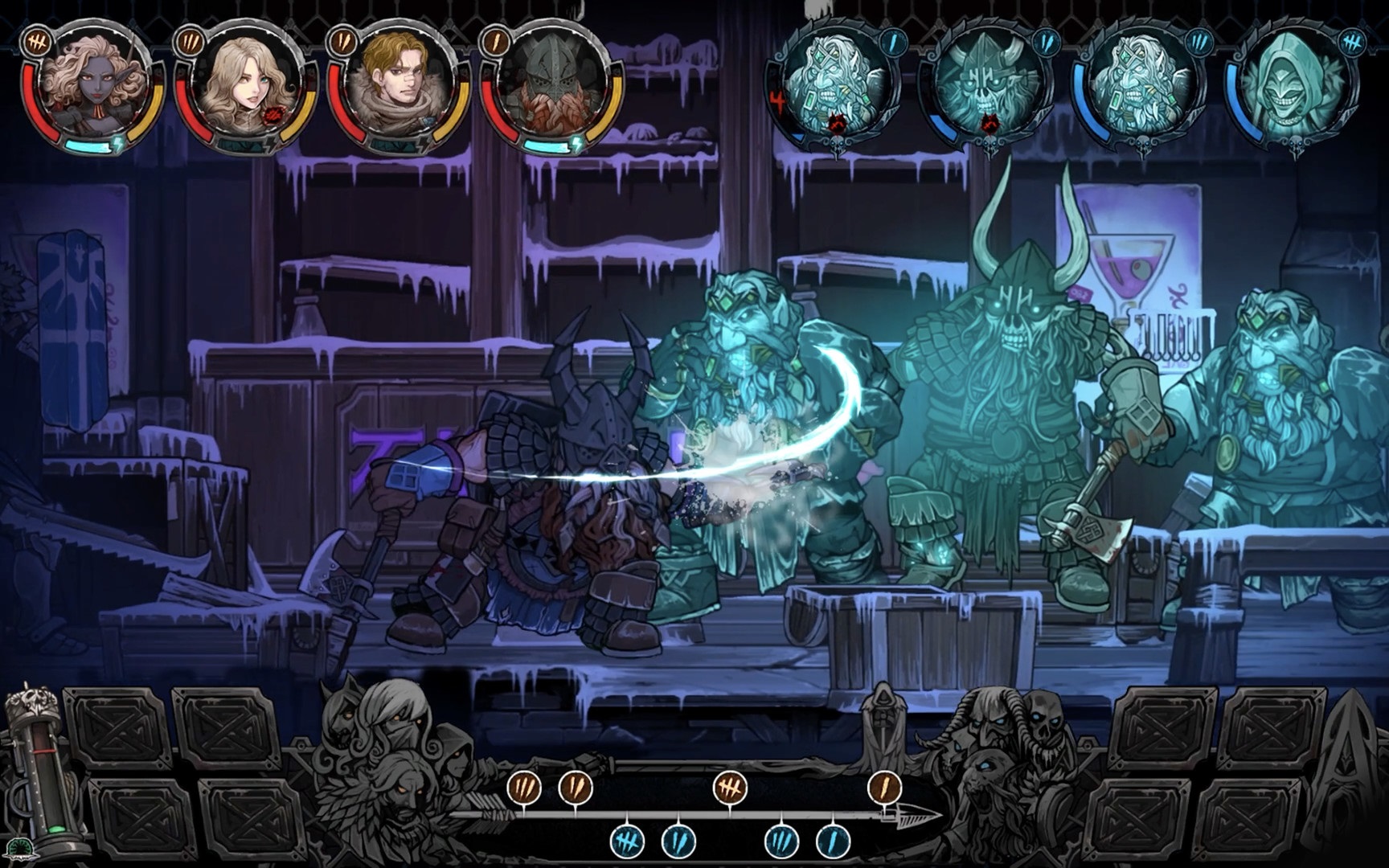 I could go on, but it would just be mean and pedantic. The point is, Vambrace has the art, sound and story direction of a top-flight RPG, bolted onto a badly designed roguelite. It’s a gorilla with a sparrow’s head; a bloke’s floppy legs and bum protruding from a horse’s neck, where there should have been a centaur.

There’s a reason why so many roguelites (see FTL, and DD once again) have so little exposition and narrative outside of snippets encountered during play: because they know the player is there for a mutable, highly replayable grind. Vambrace, by contrast, sets you up for a sweeping, character-driven RPG epic, then just rattles you through a series of brutish RNG gankings. 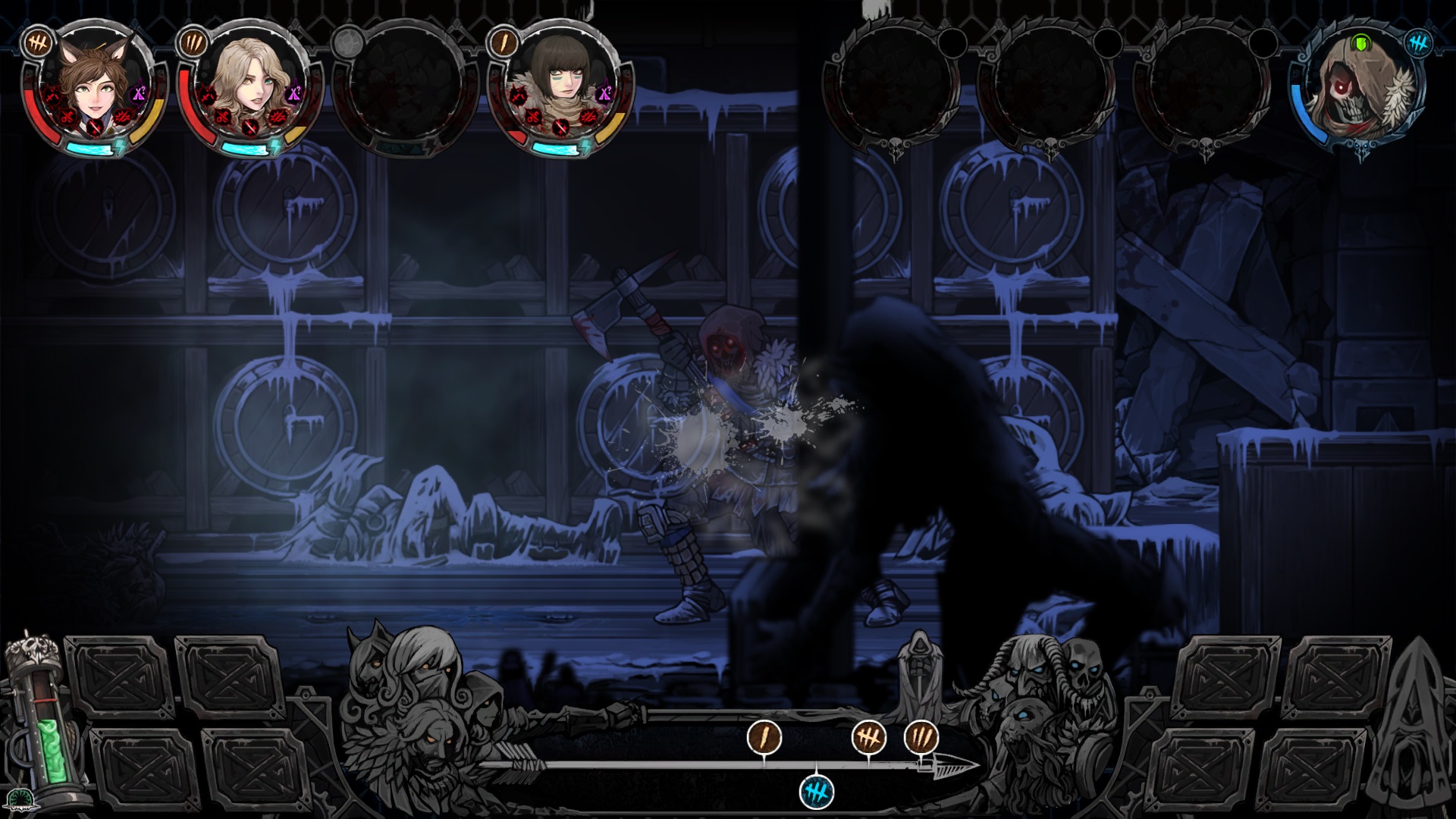 Thanks to a bug (which tbf I suspect has now been removed), this despicable git managed to wipe my whole party by sitting in the shadows long after all his mates were dead, utterly refusing to register damage and whittling us away bit by bit.

Still, after all that, I’m on the verge of recommending it anyway, purely on the basis of how it looks and feels. After all, I’m a massive fan of 2005’s King Kong, even though it was a bit naff as a story, purely due to the astonishing middle segment rammed full of giant dinosaur battles.

But while you can enjoy a movie like King Kong purely on visual merit, tuning out the work as a whole in order to enjoy a load of massive cool stuff flying around, it’s harder to do that with a game. In a film, you sit still while the world moves past you, while in a game, it’s the other way round. To keep the beauty coming, you have to stay at the controls, pushing through the world yourself. And for that to be feasible, playing has to be fun. Vambrace is not.