Your motherboard and CPU are two of the most important parts of your PC, but untangling the mess of motherboard sockets, chipsets and which ones work with which CPUs can be an absolute nightmare if you’re building a PC for the first time – especially when there’s a whole new crop of them about to be released over the next few months. It’s important you get the right motherboard for your Intel or AMD CPU, too, because otherwise it simply won’t work – and nobody wants that.

To help you on your quest to find the best motherboard for your Intel or AMD CPU, I’ve put together this handy guide. Below, you’ll find everything you need to know about which motherboards are compatible with which CPUs, as well as all the different chipsets and sockets you’ll see when buying a new motherboard. So if you’re thinking about making the jump to one of Intel’s Coffee Lake processors or one of the new AMD Ryzen 3000 CPUs but don’t know which motherboard you should get, read on.

Take a quick glance at any CPU and you’ll probably see it’s got a heck of a lot of pins or tiny little contact points on the bottom. These are what slot into your motherboard’s CPU socket, so you’ll need to buy one that fits correctly. If you try and stuff one into the wrong kind of motherboard socket, all you’re going to end up with is a load of bent pins and a very broken processor.

There are two main types of socket that we need to concern ourselves with for building a gaming PC: LGA 1151 for Intel-based systems and AM4 for AMD users. You may also see TR4 sockets for AMD’s workstation-grade Threadripper processors or LGA 2066 socket boards for Intel’s high-performance X-series of processors, but unless you’ve been squirrelling away several thousands of pounds / dollars, these will likely be beyond the remit of your typical PC build. 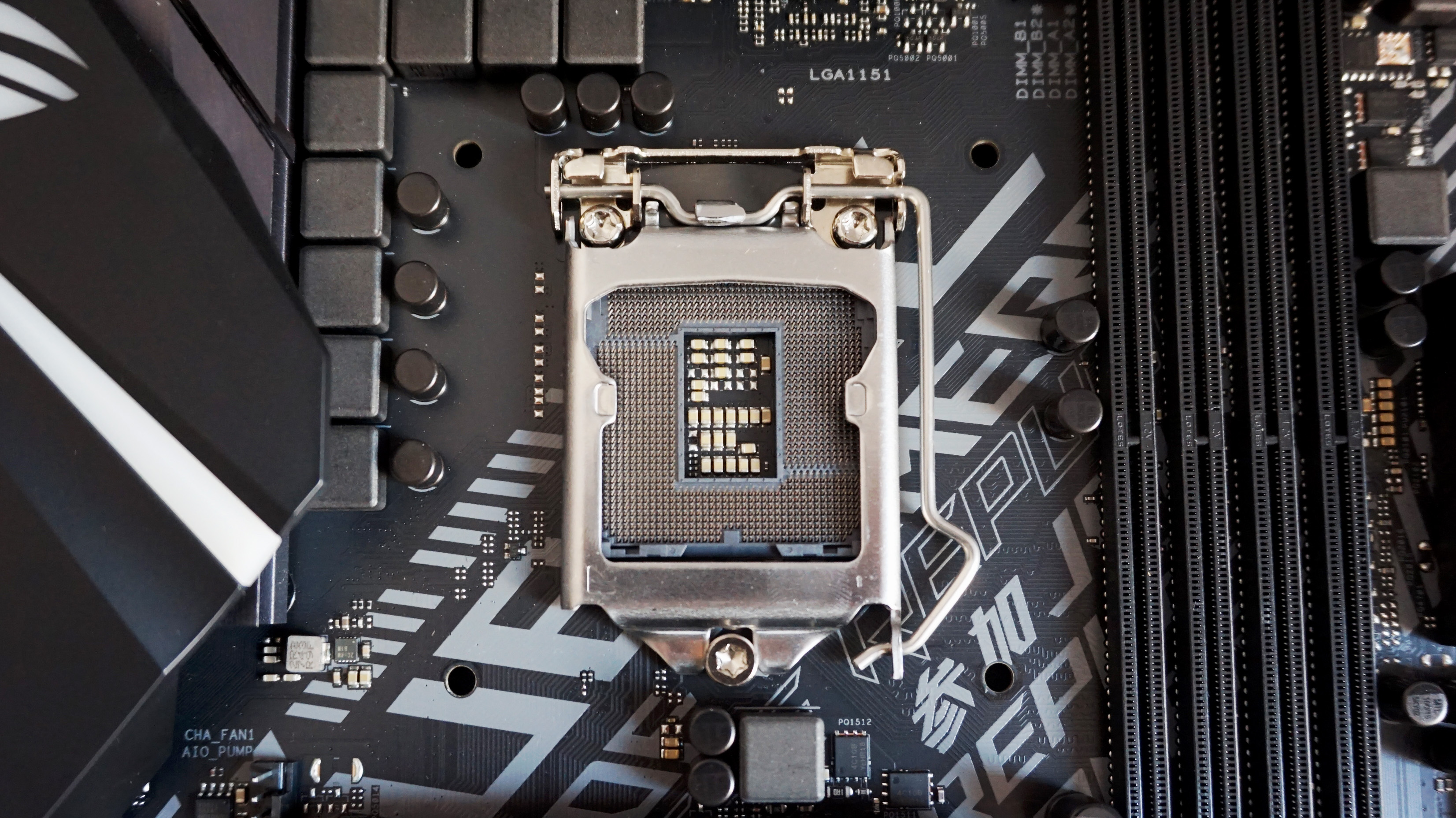 An LGA 1151 motherboard sockets for an Intel processor.

LGA 1151 supports four different generations of Intel processor: 6th Gen Skylake chips, 7th Gen Kaby Lake chips, and 8th and 9th Gen Coffee Lake chips. If you’re looking to build a new Intel system today, however, you should only be looking at 8th or 9th Gen Coffee Lake processors – and I’ll explain why once we get to the Chipset section below. With that in mind, here’s a list of all the Intel Coffee Lake processors you can currently buy that support the LGA 1151 socket.

AM4, on the other hand, is for AMD’s Ryzen processors. This includes AMD’s first generation of Ryzen 3, Ryzen 5 and Ryzen 7 chips, also known as the Ryzen 1000-series, as well as their current 2nd Gen CPUs, known as Ryzen+ or the Ryzen 2000 series, and their newly-announced 3rd Gen CPUs, the Ryzen 3000 series, the latter of which also includes the first Ryzen 9 CPU. 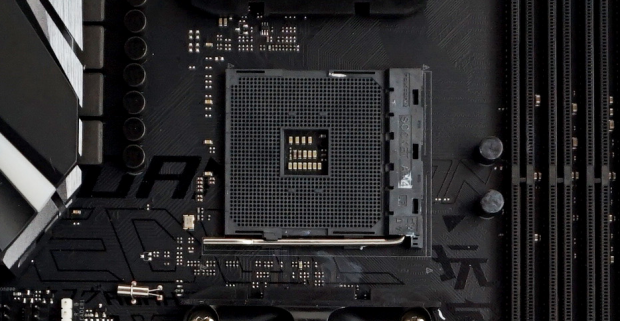 An AM4 motherboard socket for an AMD processor

It’s possible we may see a new socket appear for AMD’s inevitable fourth generation of Ryzen chips, as AMD have only confirmed support for their AM4 platform until 2020. However, it will be a while before we see those new processors – after all, AMD have only just announced their 3rd Gen 3000 series – so it’s not something you really need to worry about. For now, these are all the Ryzen chips you can buy today that are compatible with the AM4 socket.

So we’ve narrowed it down to the type of motherboard socket you need. The next thing is deciding which chipset to go for. This is the circuitry inside the motherboard itself. Without getting into too much technical detail, a motherboard’s chipset essentially determines what kind of features it has, including the types of ports and display outputs it comes with. They’re also usually designed to work with a particular family of processors, and often get released alongside said CPUs.

This is where things get tricky – at least if you’re going down the Intel route. You see, despite their latest Coffee Lake processors using the same LGA 1151 socket connection as their previous families of Skylake and Kaby Lake CPUs, 8th and 9th Gen Coffee Lake processors will only work with a particular type of chipset – the 300-series chipset, to be precise.

This means that existing Skylake and Kaby Lake owners with a 100- or 200-series chipset on their LGA 1151 motherboard still have to buy a new one if they want to upgrade to Coffee Lake, even though technically it still fits into their existing board. It’s also worth pointing out that a lot of 300-series chipsets may still need a BIOS update before they can work with Intel’s new 9th Gen Coffee Lake CPUs. The Z390 chipset works with them straight out of the box, but you’ll need to check the box on other chipsets to make sure you don’t run into any trouble.

If you’ve chosen an AMD Ryzen processor, on the other hand, things are a lot simpler. Sort of. Regardless of what generation Ryzen processor you’ve picked, they’re all pretty much compatible with every chipset supported by the AM4 socket. Some older AM4 motherboards may still need a BIOS update before you can start using it with your shiny new 3rd Gen Ryzen, but if you’re in any doubt, look for a motherboard that says it’s ‘Ryzen 3000 Ready’ on the box. To all intents and purposes, though, it’s still a heck of a lot less confusing than the situation over at Camp Intel, and here’s a handy chart explaining it all.

How do I pick the right chipset?

If you’re building an Intel Coffee Lake system, you currently have five main LGA 1151 chipset options for your potential motherboard. You’ll find the cheapest, entry-level chipsets at the top, and the high-end, enthusiast ones at the bottom. These are the letter and number combinations you should be looking out for and a rough guide to the sort of prices you can expect to go with them (note that all of these have a 300 number in their model name, hence the 300-series):

Sometimes motherboard manufacturers make it easy and include said chipsets in the name of the motherboard (see below). Other times, it’s less obvious, so you may have to check the box or online specifications to check it falls into one of those five chispets. 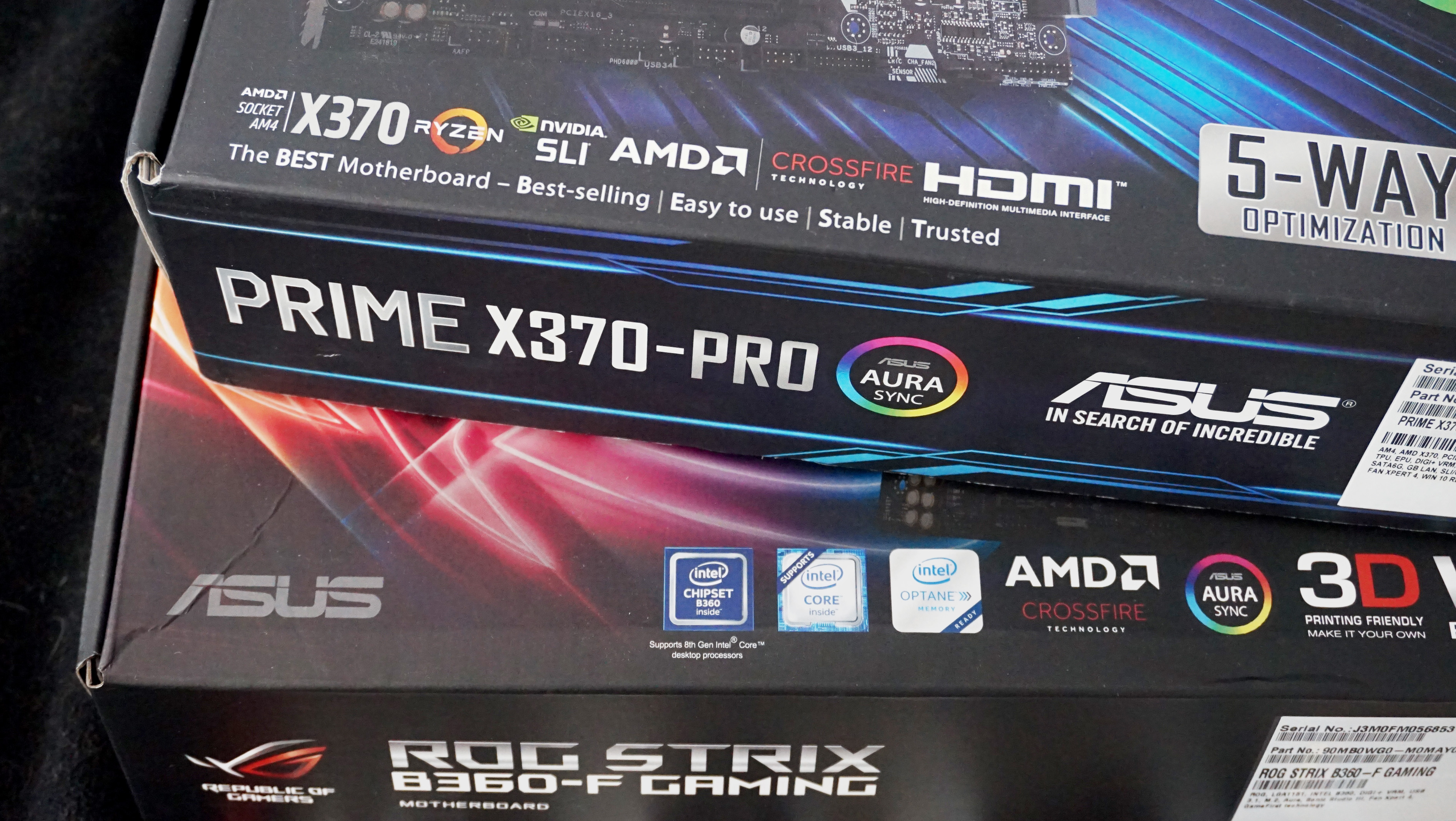 Sometimes the motherboard’s name will have the chipset already in it, but it’s worth checking the other logos at the bottom to double check you’re picking the right one…

In terms of picking the right one for you, it’s important to think about what you want from your PC once you’ve finished building it. If you’re building a powerful Core i7 or Core i9 system, for instance, you’ll probably want a high-end Z370 or Z390 chipset motherboard to make the most of it – especially when these are the only two chipsets that actually support CPU, GPU and RAM overclocking.

For those building a more modest Core i3 PC, on the other hand, it’s probably best to look toward the H310 or B360 end of the spectrum – unless, that is, you have an Intel Core i3-8350K or Core i3-9350K, which do support overclocking by virtue of that K on the end of their names, in which case you’ll probably still want a Z370 / Z390 board.

Some chipsets will also have integrated 802.11ac Wi-Fi options if your PC isn’t going to be anywhere near an available Ethernet port (handy, if you’d rather not clog up one of your PCIe slots with a network card), while others have RAID support for combining your storage devices into one single, giant drive. It all rather depends on what your needs are and whether you want to leave yourself any wiggle-room in the future for further tinkering.

If you’re building an AMD Ryzen system, on the other hand, you’ve mainly got a choice of five (soon to be six) chipsets, which are again ordered below from lowest to highest in terms of overall cost and features:

There are a few intricacies worth pointing out here. The X570, for example, is AMD’s new chipset designed for their 3rd Gen Ryzen 3000 CPUs, and will launch alongside them on July 7. Both of them support the new, super fast PCIe 4.0 standard, too, which gives you oodles more bandwidth to play with than regular old PCIe 3.0 (which is what you’ll find on all other current motherboards), so if you’re thinking about a Ryzen 3000 chip, you probably ought to pair it with a X570 motherboard to get the most out of it.

The X470 and B450 boards, on the other hand, are arguably the best picks for AMD’s 2nd Gen Ryzen chips. For starters, both have built-in support for 2nd Gen Ryzen from the off (the others will require a BIOS update unless it states otherwise on the box), and they’ve been designed with those 2nd Gen processors in mind, too, allowing you to get more out of them for gaming and daily computing. 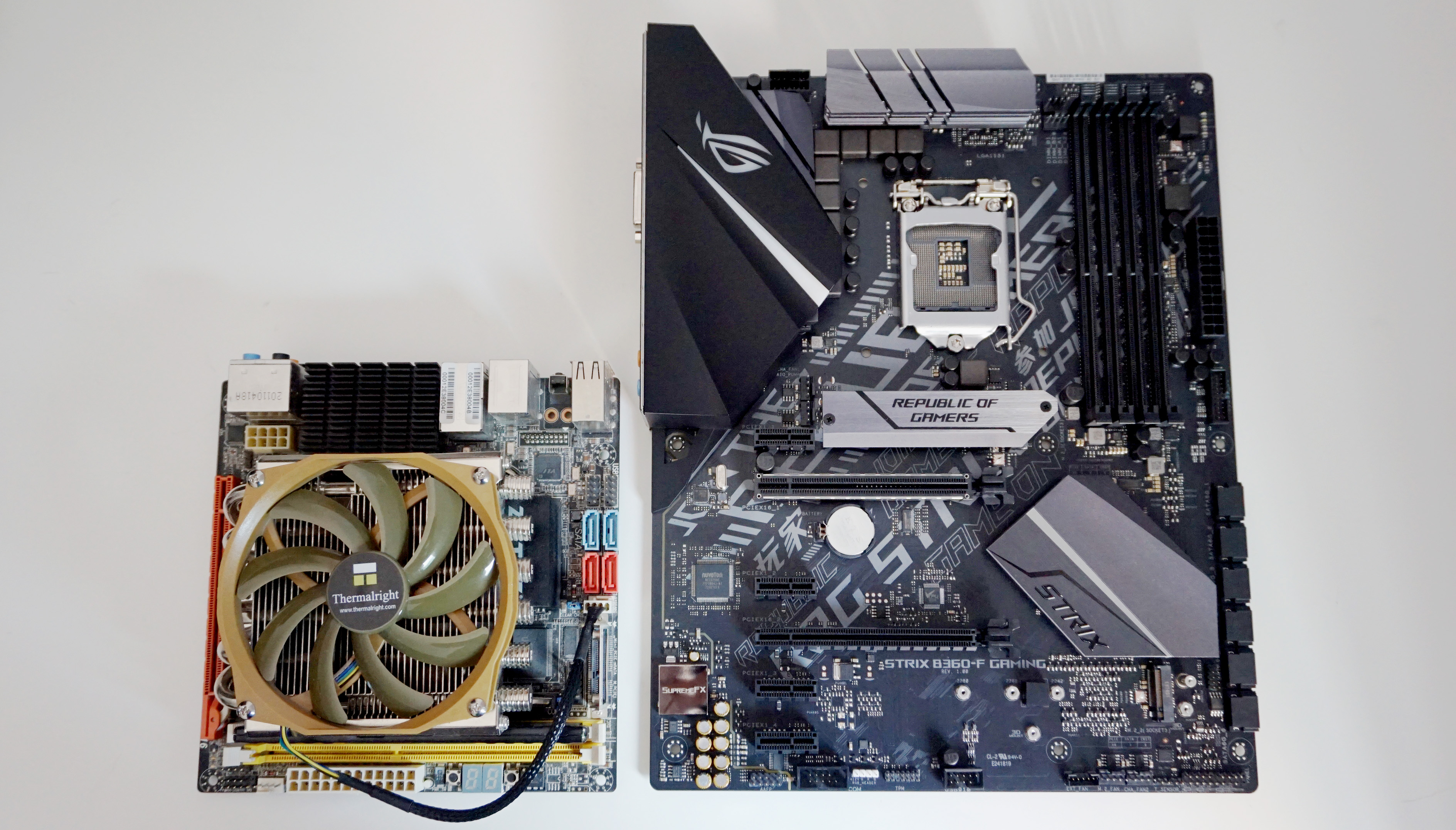 Some chipsets dictate the size of the motherboard as well, so make sure you get the right one for your case.

Much like the Intel chipsets, the lower-end AMD chipsets don’t have quite as many features as ones further up the scale. The A320 and B350, for example, don’t support AMD Crossfire and Nvidia SLI which let you use two graphics cards at once, so those considering a multi-GPU system should really be looking at X370 or X470 boards only.

The A320 doesn’t support CPU overclocking, either, and only comes with four SATA ports and one SATA Express connection for your storage devices. B350, X370 and X470 chipsets, meanwhile, do support overclocking and come with six SATA ports and two SATA Express. All of them, however, have some sort of RAID support for combining your SSDs into one big mega drive.

Anything else I should know?

From there, it’s pretty much up to you what kind of extra features you go for. Some motherboards like the Asus ROG Crosshair VII Hero (Wi-Fi) have additional overclocking tools such as an LED troubleshooting display, boost buttons and extra controls for open-case builds right there on the board, while others like the Asus ROG Strix X470F-Gaming have pre-mounted I/O boards for a neater finish round the back of your PC.

It probably goes without saying that you should also pick a motherboard that actually fits inside your intended case. There’s no point buying an ATX-sized motherboard when you’ve got a small form-factor or mini-tower case, nor is there much sense in buying a jumbo full tower case for a tiddly mini-ITX motherboard.