Last time on the BoC: The Basement’s zoo got some major upgrades, and the fort rode out a goblin siege through the time honoured tactic of hiding. A furnace worker called Udil snapped under the pressure, and some migrants chose exactly the wrong moment to try moving in.

As the stone wheel of the Dwarven calendar grinds towards Autumn, fort founder Lorbam is desperate to begin digging deep shafts in search of the legendary underground forest, where she hopes to capture more beasts for her burgeoning zoo.

But Mayor Urist, ever the pragmatist, stays her comrade’s hand: now that the fort is effectively immune to goblin sieges, they’re on to a good thing, and she doesn’t want to throw it all away by opening up a chaotic second front underground. As such, she keeps Lorbam distracted by suggesting she sorts out better accomodation for the Basement’s swelling herd of domestic animals – because that’s zoo work of a sort, right?

With the beastmaster thus occupied, Urist designates a vast programme of mining to begin a few levels below the zoo. For too long the dwarves have been living in shitty, sand-walled bedrooms with little or no furniture, and it’s time they had proper homes. It will take the miners a little while to hollow out the grand residential complex Urist dreams of, but it’ll be worth it. 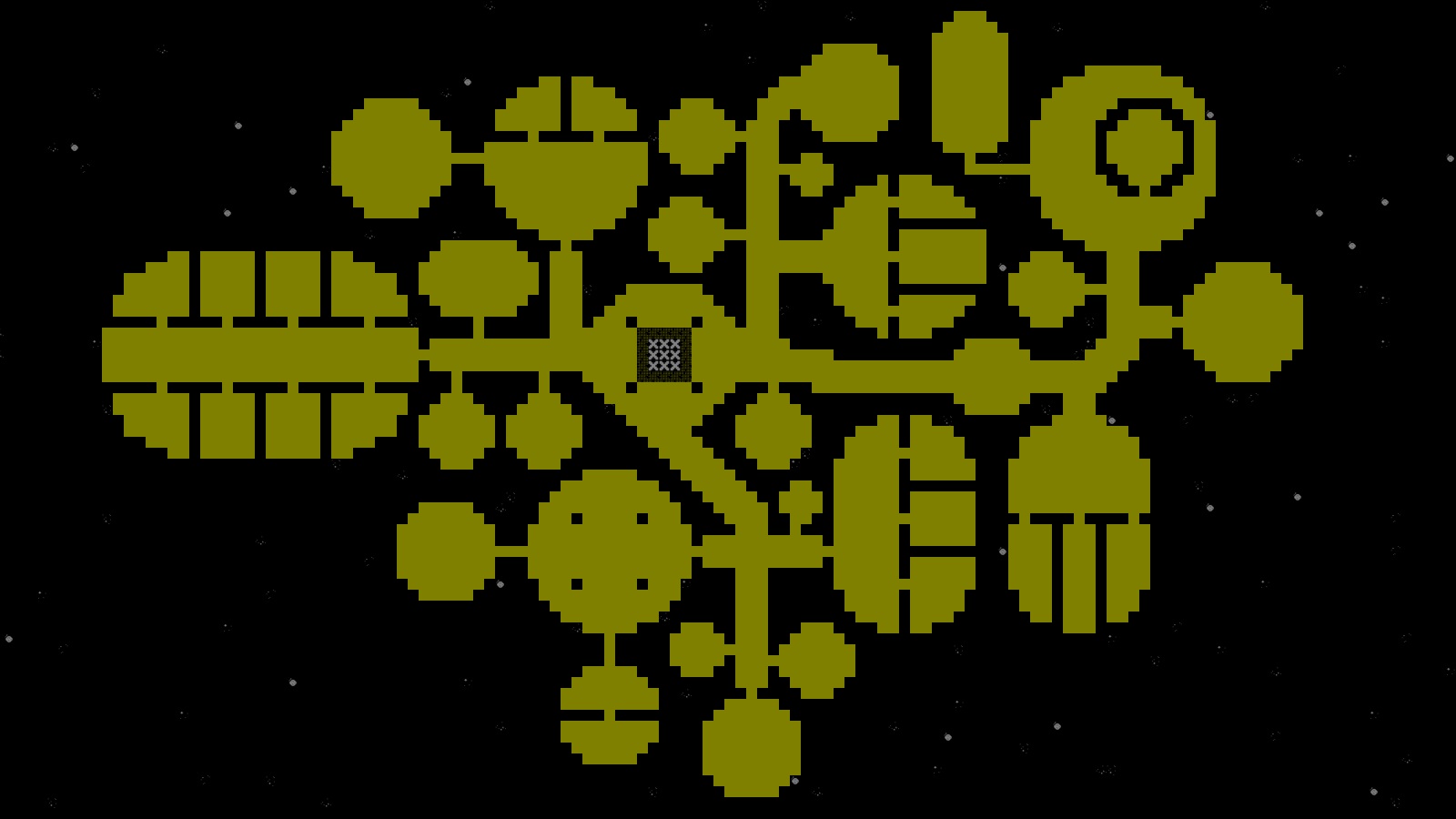 Isn’t that a pretty complex, eh? Planning that out was a superb way to relax for a bit.

Soon, the yearly Dwarven trade caravan arrives from the Mountainhome, bringing with it tons upon tons of metal ingots, hundreds of barrels of booze, and stacks of high-quality kit. Luckily, stonecrafter Imush has spent the summer cranking out action figures of a despised historical witch, and so the Basement has enough cash to buy the lot. In fact, there’s even enough spare for chef Ushat to replenish her stock of horrid meats, and buy up a few casks of leopard blood on the side. 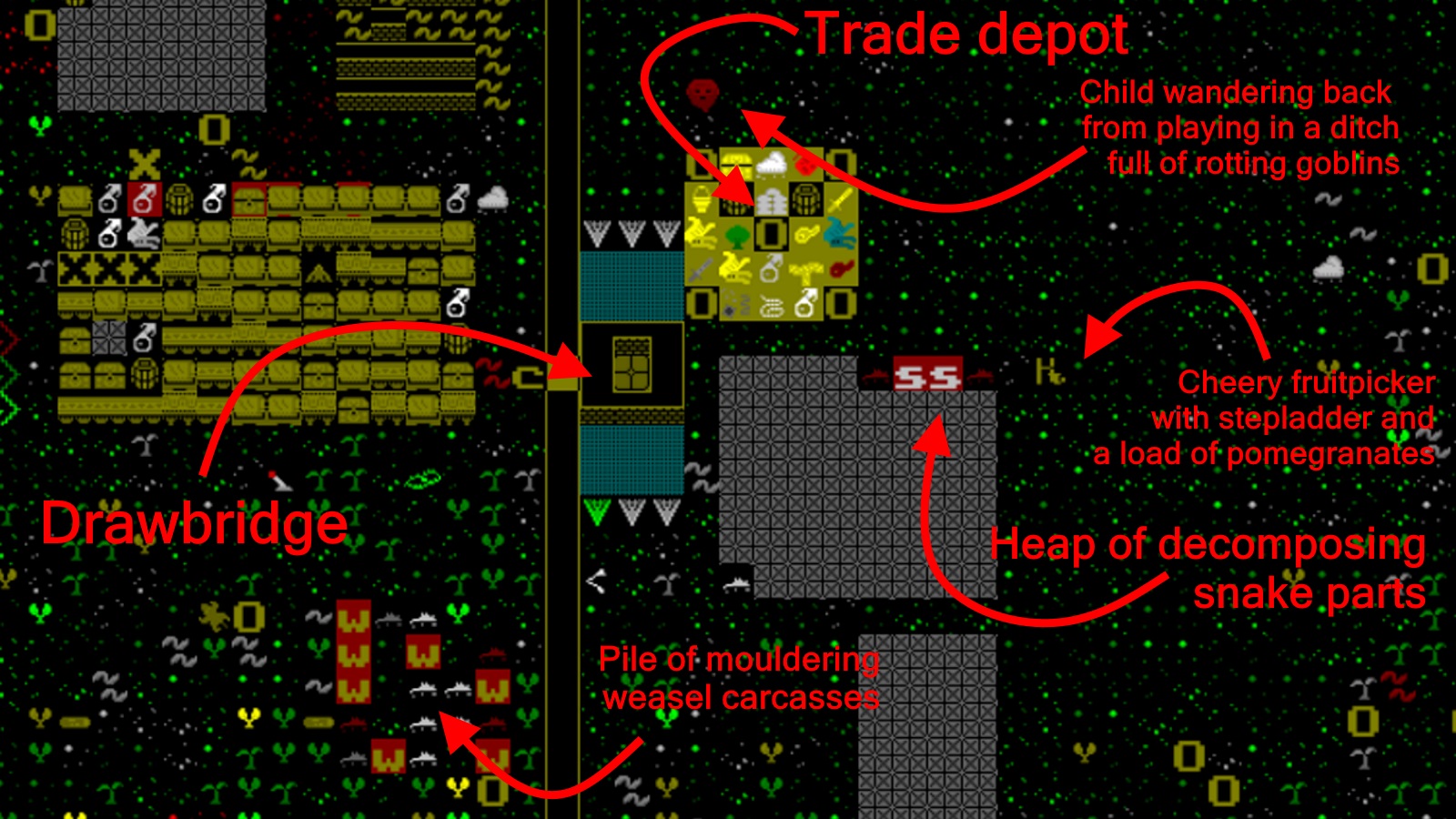 Sometimes I look at the details of a scene from DF, and wonder what the hell it’s like at ground level. In this instance, from the POV of the newly arrived Dwarven traders. I mean, just look at the amount of carcasses everywhere; imagine the smell, and the sight of the fort’s residents with their sweat-saturated, falling=-apart rags. It would seem like a vision of hell, frankly.

As an aside, you may remember the brave migrant who died last time while smashing a goblin in the face with a book about what the world would be like without goblins. Well, to honour him, the dwarves have recovered his tome and put it in the tomb complex on a silver pedestal. But it turns out a lot of the slaughtered newcomers had books on them when they croaked, and we’ve looted them too. Here is the fort’s current library: 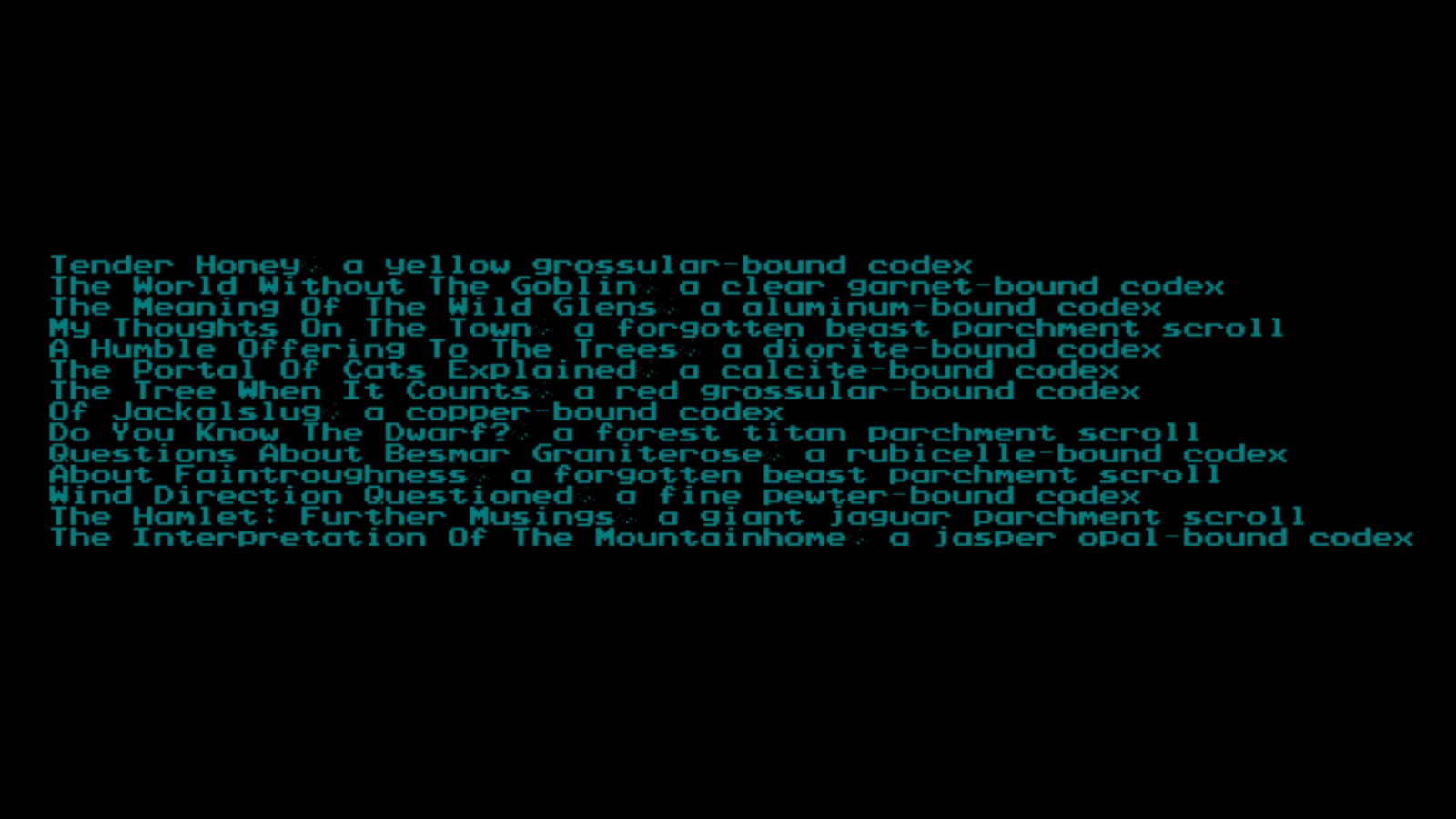 Oh, and another nice little observation that I don’t know where else to put: Someone engraved a memorial slab for the War Mayor Dashmob, with an epitaph that concludes “devoted husband and lover of greaves.” The best bit is, the slab is right next to the pedestal bearing the artefact golden greaves Dashmob wore in life, which I think is a nice touch.

It’s not just the Mountainhome traders who are visiting the fort, either. Undeterred by the bards who arrived in summer only to be carved up by goblins outside the fortress gates, yet more poets, musicians and dancers are pouring in to the Great Harvester, all begging to be made permanent residents. It seems every couple of days, there is a new petition for citizenship.

But while stocks are plentiful for now, Urist is cagey, and only allows a few performers to settle down. She does, however, offer citizenship to a trio of axe-wielding warriors – a dwarf and two humans – who rock up in the middle of the month. Despite the efficacy of the fort’s turtling, it feels good to have some soldiers around the place again. For now, they’re sleeping on the floor, but soon there will be beds enough for everyone, as the residential complex is well on the way to completion. 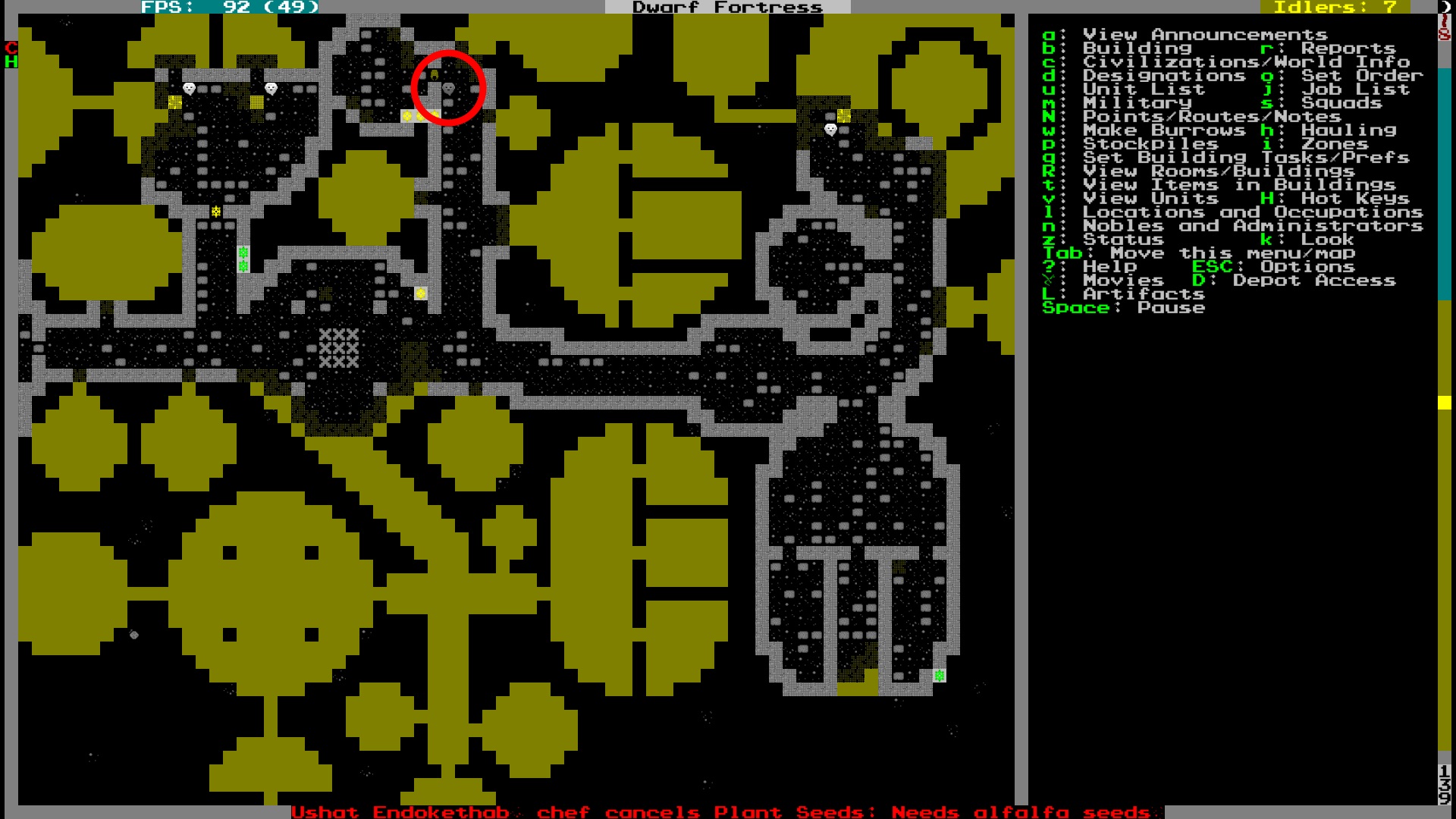 The heroic miners make short work of the cold stone beneath the rainforest. Check out the circled dwarf, carting rubble away with a wheelbarrow! that’ll all be turned into action figures of witches, soon.

But what of Lorbam’s progress with the domestic animals?

The first part of Lorbam’s plan is very sensible. She’s dividing up the floor of the valley with wooden walls, compartmentalising it into a series of pastures in which the fort’s grazing beasts can chomp away at grass to their hearts’ content. 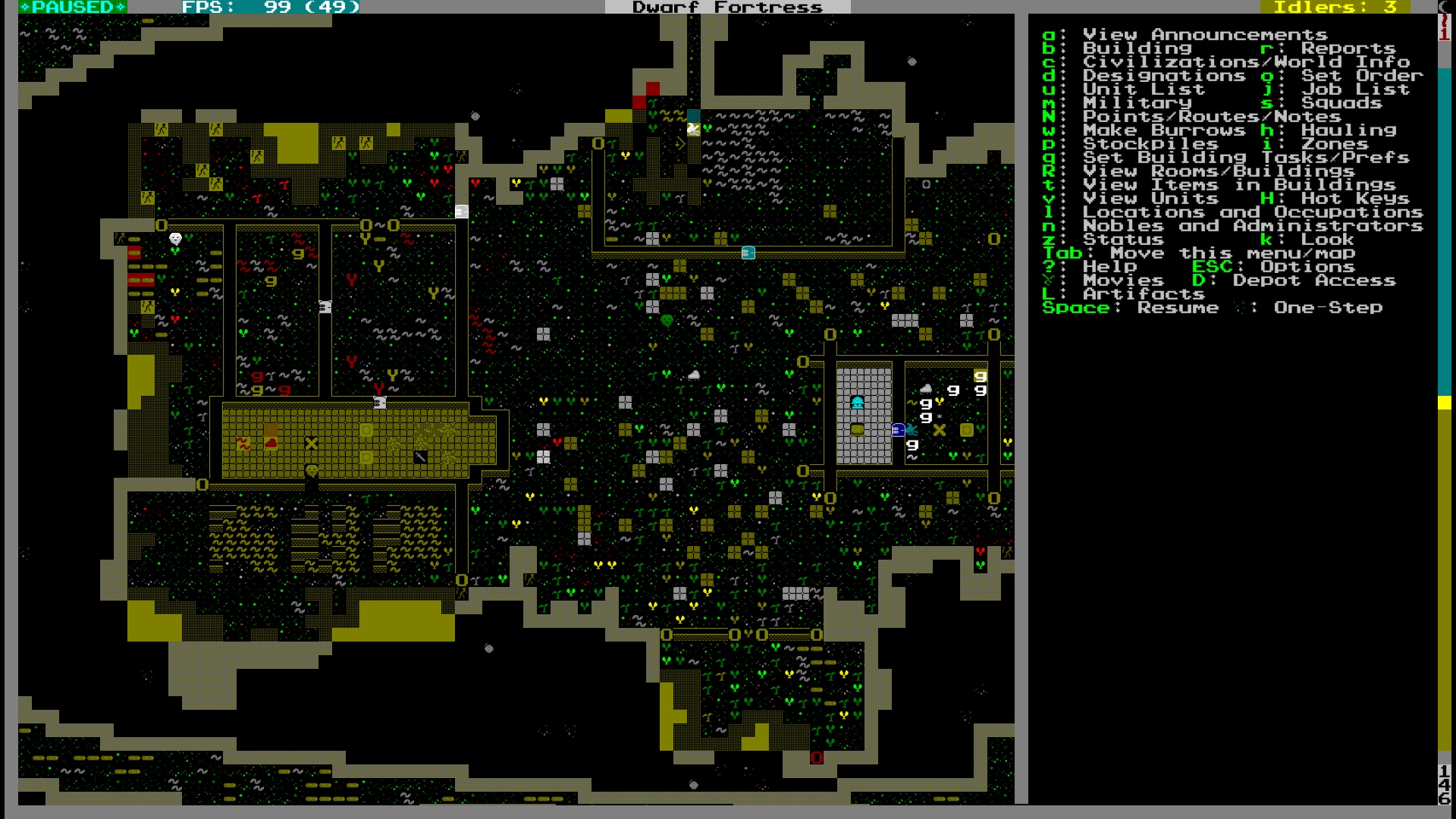 This is the just the start of the plan for the valley. Eventually, the intention is to roof it over entirely, making the whole place into a gigantic structure with wood-buttressed walls. Or perhaps an arena…

There’s a paddock for Yaks, another for cows, and one for water buffalo, plus an alpaca & llama pasture, a pig pen (containing a stray cavy), and enclosures for donkeys, horses, reindeer and goats. It’s all very sensible, and gives the animals much more room to graze.

In the process of getting all the fort’s herds reorganised, I noticed that every single one of the Basement’s domestic animals was covered in a thin coat of Lorbam’s own blood. That’s right folks, the Haunted Blood never went away! It’s apparently been soaking the grass this whole time, slowly marinating every beast to come into contact with it.

The second part of Lorbam’s plan, however, is potentially the foulest thing that has happened in the fortress so far. Folks, welcome to the Bird Hole. 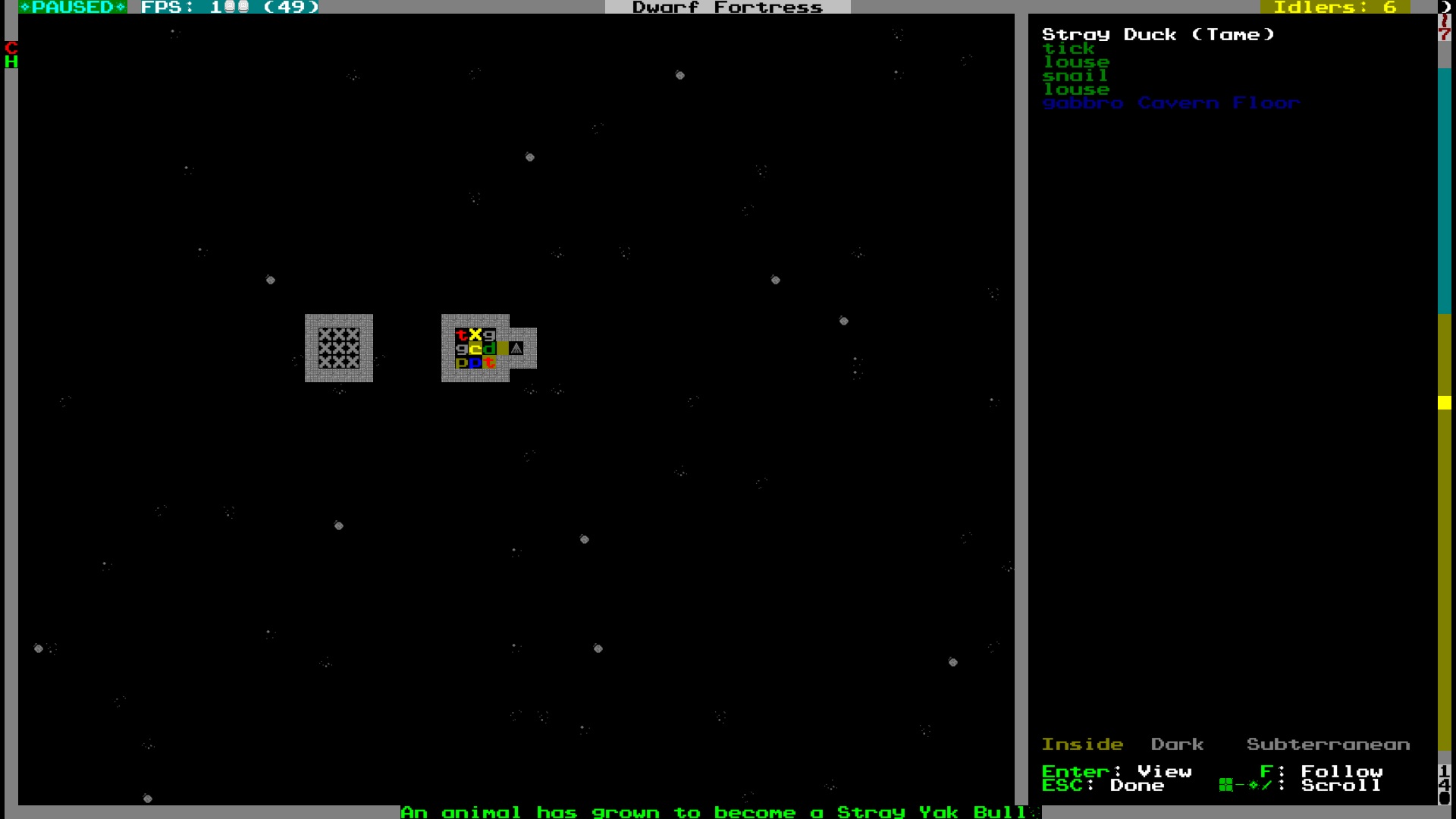 If you remember, this is the hole in the floor of the zoo which used to house a despondent cheetah. Before that, it was the disastrous containment vessel for a weasel so angry it was able to distort time itself. Now, somehow, it is worse. Because this squalid pit, just nine feet to a side, now contains three guinea fowl, five ducks, three peacocks, two turkeys, and a half dozen chickens, all on a bare stone floor. Well I say bare, but it’s not: so filthy is the Bird Hole, that its floor is an inch deep in vermin: ticks, slugs, snails and lice by the shovelful. The birds are furious. It’s like some kind of Bernard Matthews anxiety dream.

Urist is just realising how grim the Bird Hole is, and working out what to do with it (or if I’m honest, I am), when her attention is yanked elsewhere: there’s some kind of barney going on up in the pub.

Udil, the furnacehand who had a massive tantrum during the summer, is at it again. Letting loose a throaty roar, she lamps one of the Great Harvester’s cacophony of poets right in the face, and then begins battering his left arm with both fists.

Amazingly, she launches her assault at the exact same moment as, over the other side of the pub, a “tame” rattlesnake loses all vestiges of its civility, and lunges over a table at Ushat the chef. There then follows a farcical slapstick sequence in which the chef continually charges at the snake, but misses and slams into various other dwarves. 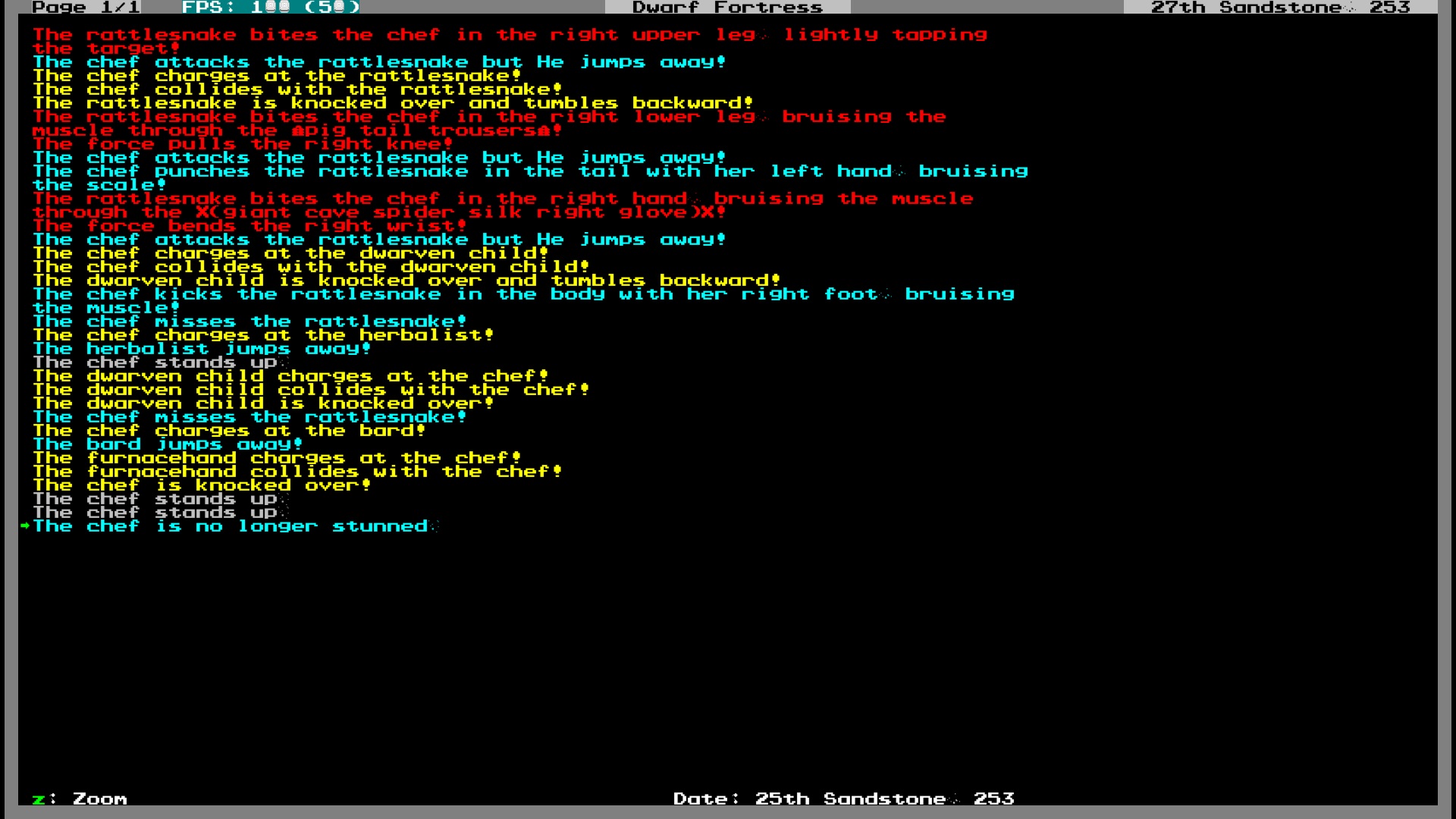 Then, fantastically, the two fights collide. Having finished with the poet, Udil charges right at Ushat, right as Ushat misses the snake and charges into Udil. The two dwarves smash into each other like a pair of elephant seals and exchange a few blows, before the fight ends with Udil noticing the rattlesnake jeering from the sidelines, and popping its head like a grape.

A look into Udil’s head at this moment finds her regretting the fist fight she started, but feeling absolutely nothing about killing the snake. Moments later, she falls into a deep depression, from which (knowing Dwarf Fortress) she will never recover.

Ushat, however, has the opposite reaction to the fracas. Almost immediately after leaving the pub, she is struck by a fey mood, and legs it straight to Rakust’s treehouse to claim his carpentry workshop. Maybe it’s the adrenaline from the pub fight, or just her joy at acquiring loads of filthy new offal to cook with, but she’s alight with creativity. 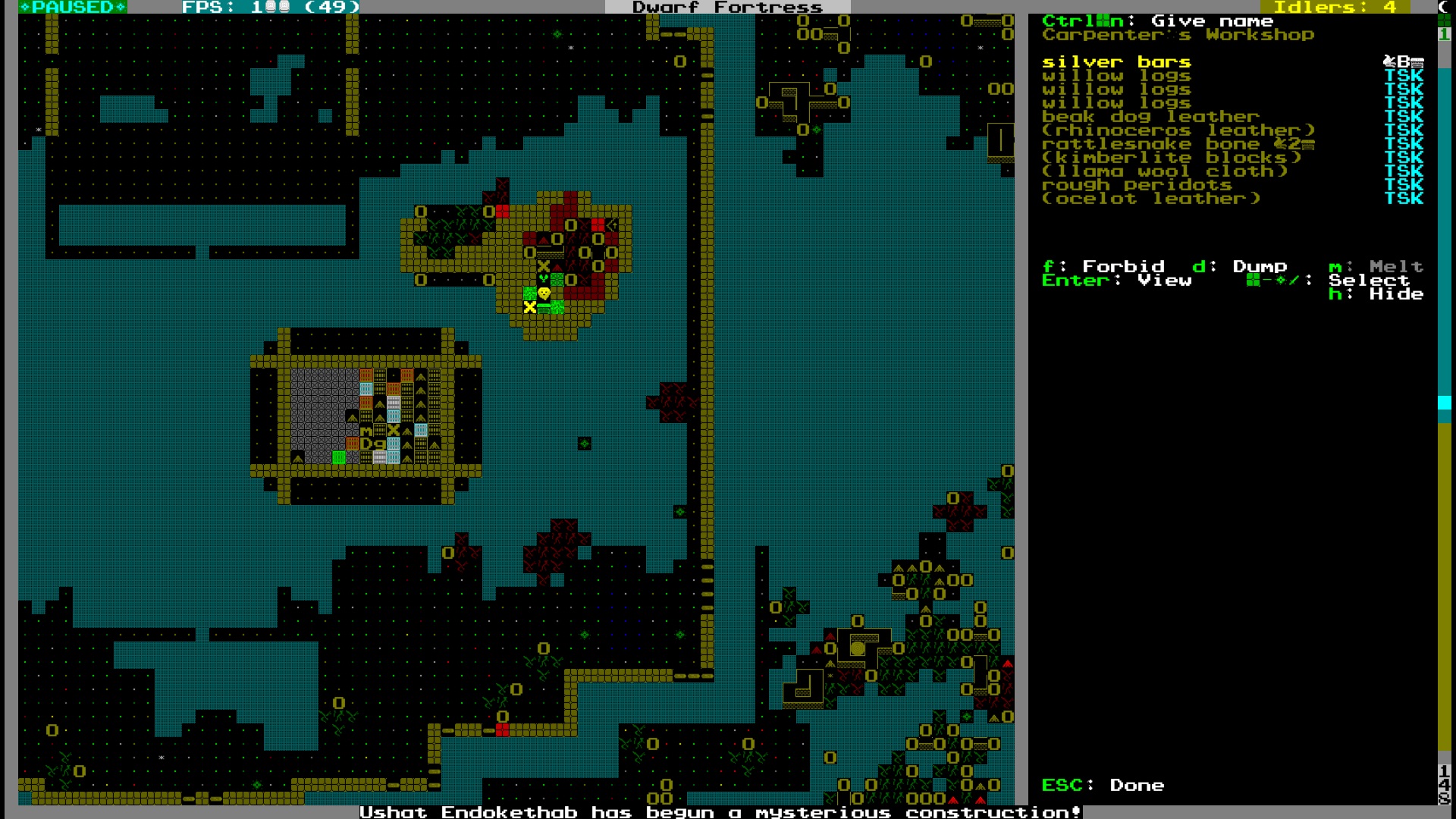 I can tell this artefact is going to be a meaningful one. Those willow logs were all hauled from the blood-soaked site of last summer’s massacre, while the beak dog leather is very possibly from the beast that killed the War Mayor. The rhino leather is clearly a tribute to the War Mayor’s predecessor Eshtan (who wore a rhino tooth), while the snake bone has to symbolise the original military commander, Id himself. Deep allegory, mates.

And there it is – Ushat’s work of art. A chair called the “hot thrower”, with an image of a leopard labouring as it settles into the nearby jungle. How can a leopard labour? Only Ushat knows. I wonder if she was inspired by the barrel of leopard blood she bought from the traders? Whatever the specifics, there’s no doubt as to the broad meaning of this artefact: the depiction of a wild beast settling into the jungle, fashioned from materials emblematic of the dwarves’ sacrifice, proudly proclaims that the Basement has won its place in the Jungle of Hides, and is here to stay as the ultimate Dwarven zoo. 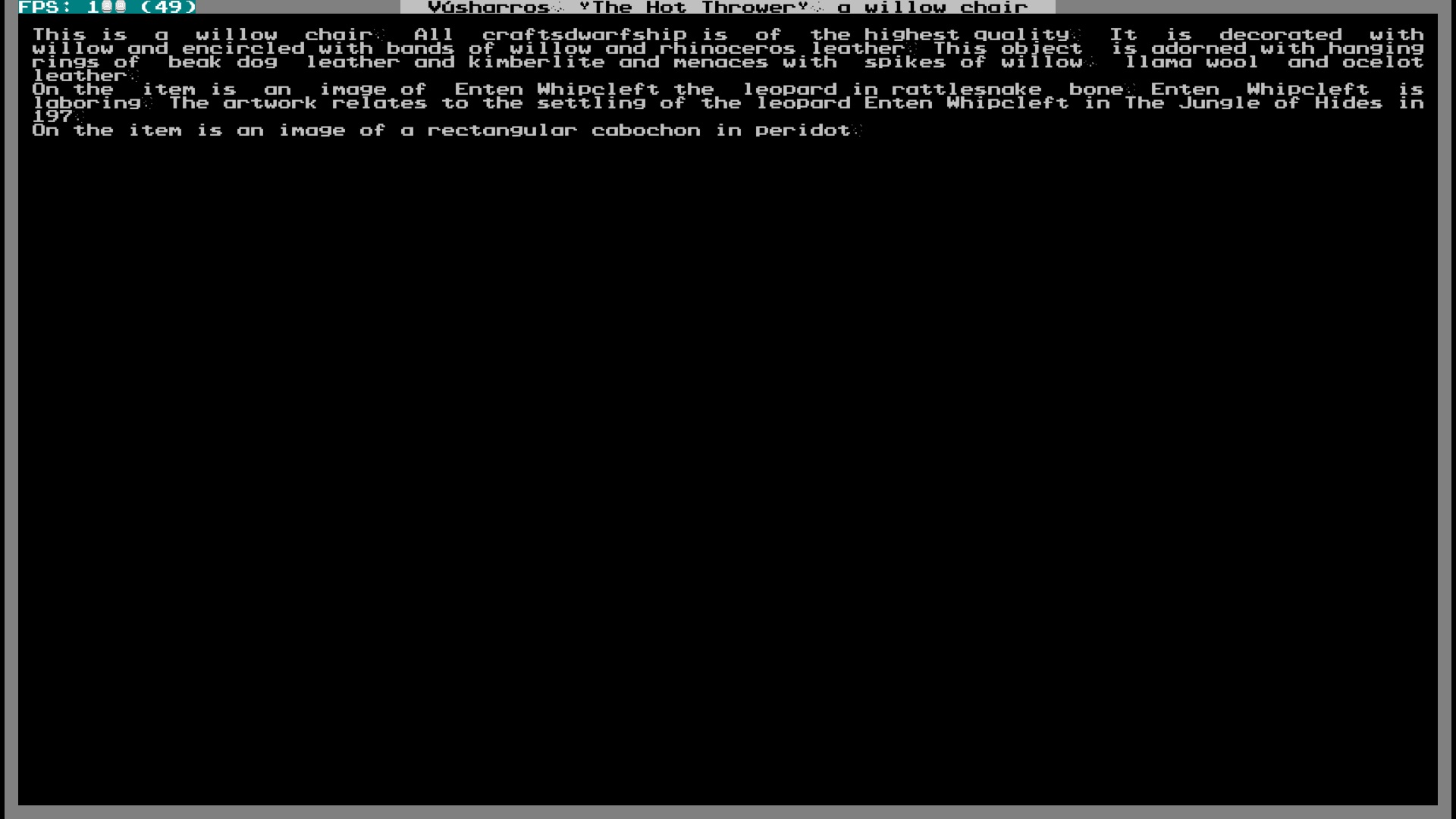 Nevertheless, there is no time to celebrate Ushat’s work. For Udil, haggard and bruised from her pub brawling, has staggered downstairs to the zoo, and has kicked off yet again. With a grunt of despair, she leaps down into the Bird Hole (which has still not been solved), and begins booting one of the louse-ridden peacocks around like a suppurating football.

And that’s it really, isn’t it folks? Forget grand heraldry with leopards and jewels. This is the real spirit of the Basement of Curiosity: an impossibly depressed dwarf, kicking a bird to death in a vermin-infested pit. Long may it last.

Next time on the BoC: Lorbam cannot be put off any longer – the dig downwards must begin.