Four years ago, I remember sitting down in front of my PC and controlling the camera of Assassin’s Creed Rogue with nothing more than the flick of my eyeballs. Eye-tracking had arrived. Well, sort of. Back then, I had to stick an extra doodad onto the front of my monitor before I actually got it working, and while it was a novel and intriguing idea at the time, it really wasn’t a very practical way of controlling the game long-term. Nevertheless, the tech inside that early Steelseries Sentry sensor bar – Tobii’s Eye-X software – left me impressed, and I’ve always wondered where our paths would cross next.

Finally, that day has come, as I went to see HTC’s Vive Pro Eye headset the other week, which has Tobii’s eye-tracking tech built straight into its googly cartoon eyes. And by golly does it work a treat.

Now, technically the Vive Pro Eye is part of HTC’s enterprise VR line-up. It’s not one of their designated gaming VR headsets, nor is it intended to replace the original Vive Pro, which is effectively the same headset minus the eye-tracking. You can still buy one to play games with, of course, provided you can stump up the £1499 it costs to actually get one (the non-Eye Pro goes for £799, by comparison), but the few VR games that are compatible with eye-tracking will also need specific Pro Eye support in order to work with it properly, reducing that already practically non-existent pool of games to pretty much a flat zero. That means you’re effectively paying almost double the money for no real reason.

Instead, the Pro Eye’s main purpose is to serve srs bsns types who want to use its eyeball scouting for things like professional training simulations, or more commercial applications where they need to work out what sorts of things people look at, and for how long.

To give you an idea of what that looks like in practice, here’s a brief summary of some of the business-y demos I did: I learned how to do manually open and close a train door in an onboard train personnel simulation made by a company called Vobling. I also customised my own fancy-pants BMW sports car in a customer experience app made by ZeroLight. Finally, I successfully passed Kainos’ VR hazard perception test, proving that I’m still, in fact, a competent driver despite never, EVER looking at my mirrors since passing my driving test.

But while all three applications I tried were about as far from playing games in VR as you could possibly get, the Eye Pro is still a fascinating headset in its own right – if only because the things eye-tracking bring to the table would be so damn useful for games.

In the BMW experience, for example, ZeroLight made use of Tobii’s foveated rendering tech, which sharpens the resolution of what you’re actually looking at and lightly blurs everything else to help save on graphical processing power. It’s sort of how our eyes work in real life anyway, as you don’t see everything in your peripheral vision with the same kind of clarity as what’s straight in front of you.

This could be a big help for, say, lower-end, VR-capable PCs that maybe don’t have as much grunt as super high-end gaming machines, as it wouldn’t have to render everything at the same resolution. It could adapt the resolution based on where you’re looking, allowing for smoother frame rates and steadier performance – and the best thing was I barely even noticed it was doing it at all until my demo handler showed me a side by side comparison while I had the headset on. 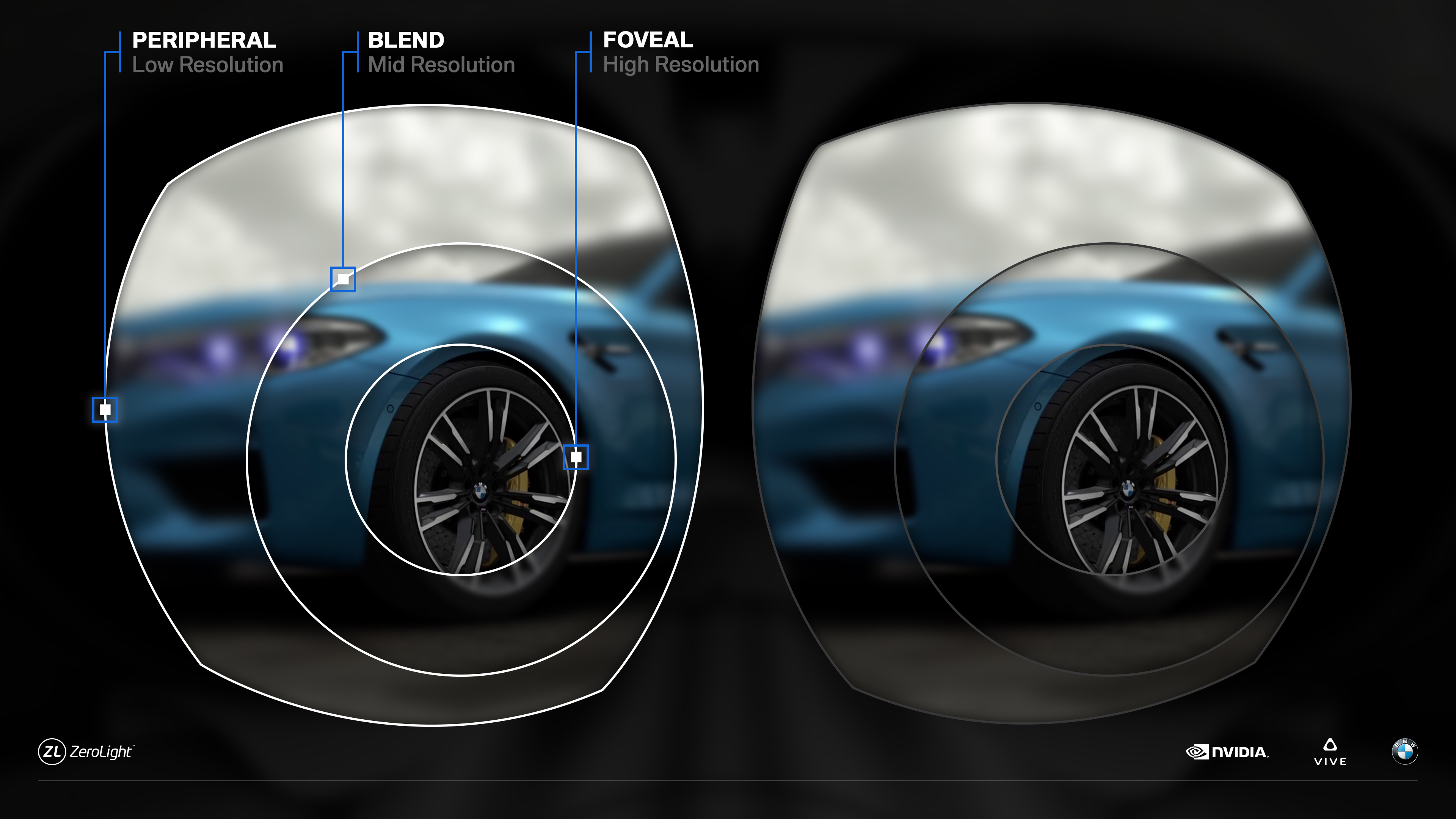 This is sort of what Zerolight’s foveated rendering looks like, but in practice it’s a lot more subtle.

Admittedly, there wasn’t really much to look at besides the car on the demo’s very grey race track, but the level of detail that foveated rendering brought to the table versus not having it at all was still pretty impressive. I was able to get right up close and see all the stitching on the upholstering, the gleam of the hubcaps, and every textured finish on the dashboard, which is something that the headset’s standard combined resolution of 2880×1600 just didn’t quite do justice. The only thing that was really missing was a breath detector so I could fog up the windows and draw smiley faces with my finger.

I was also very onboard (sorry) with the way Vobling used the Pro Eye’s tracking capabilities in their train crew simulation. When I was learning how to do a departure sequence, for example, I had to physically move my head and look each individual train door to make sure they were all closed properly, with a little tick signifying that I’d stared long and hard enough in the correct direction to complete the objective. None of this ‘quick once-over and we’re done’ cheating the system kind of malarkey. Instead, I was made to think carefully about each action I was performing, and there were times when I thought about maybe teleporting myself further up the platform to absolutely double-check everything was locked up tight.

It also made me think how neat it would be to apply to these kind of deliberate glances to character conversations. Alice B mentioned in her Draugen review how your ward Lissie will sometimes stop talking unless you actually turn around to look at her, and eye-tracking could be used to back this up even further, as the headset would be able to tell exactly where you’re looking. 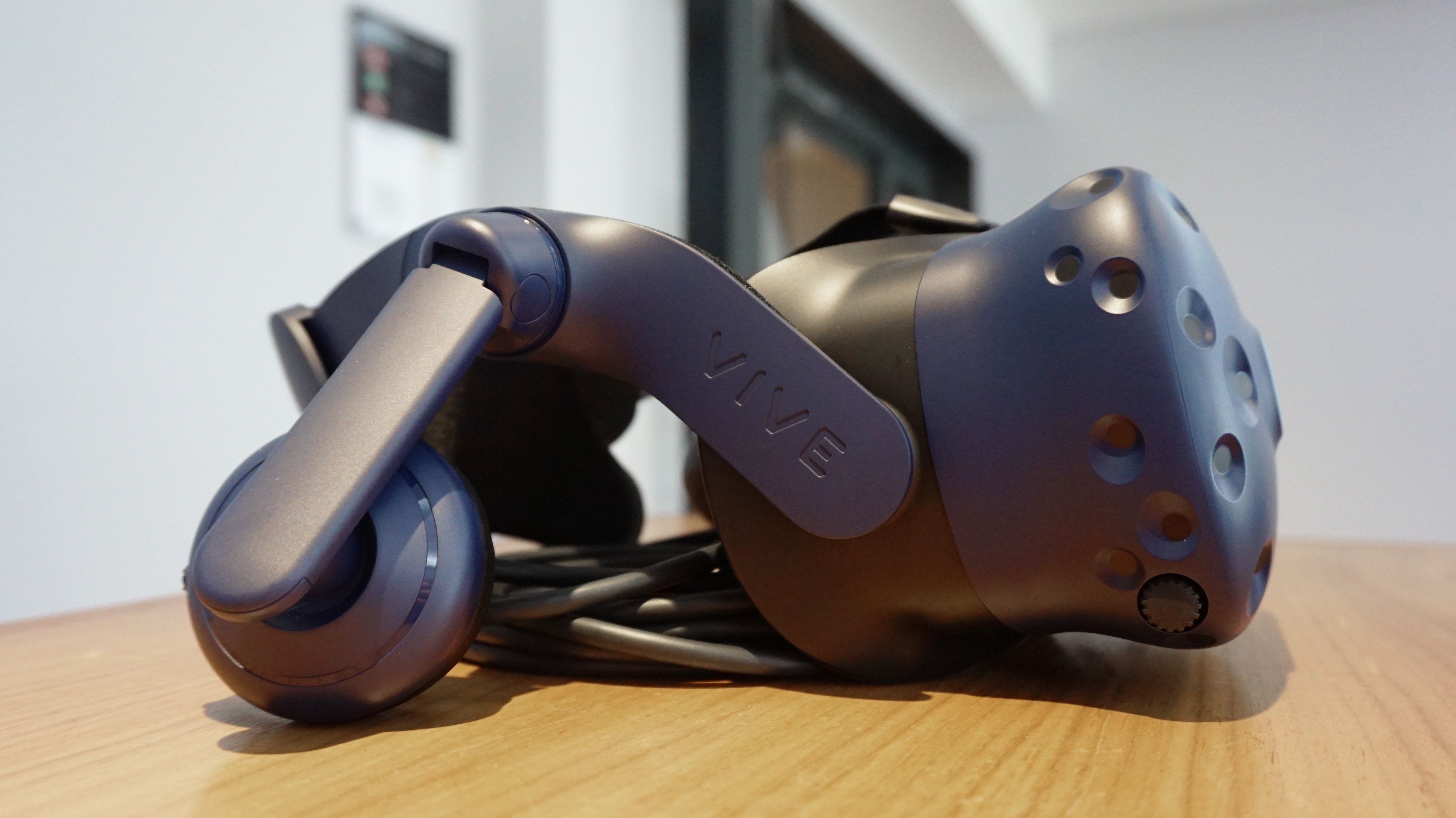 The Vive Pro Eye’s headband was a lot comfier than the first Vive.

Kainos’ VR hazard perception test, for example, can even detect when you’re looking at cars in your mirrors, so precise is the Pro Eye’s tracking technology. With that level of detail available, just think how that could be applied to first-person conversations in RPGs, for example.If you were talking to a big-nosed dwarf, say, and you couldn’t stop staring at hairs protruding out of his oversized nostrils, they might pick up on it and call you out on it, adding that extra layer of spice and realism to each interaction.

Now, I don’t want to get too carried away with hyperbolic navel-gazing, but that sense of untapped potential really did make me feel excited about VR again – which, I’ll be honest, hasn’t been the case for a number of years now.

That said, it’s still just as much of a faff to set up as it was back when the original Vive first came out, what with the still ludicrous space and height requirements needed to enable its 10x10m room-scale experiences in the first place, and the condensed, but still very prominent and heavy cable curling round your shoulder continued to break my sense of immersion on a number of occasions. That part of VR hasn’t changed in the slightest, which is arguably the biggest hurdle to any of this ever making its way into something I can feasibly use in the pokey spare bedroom where my gaming PC lives.

It makes me long for the day when eye-tracking will finally make its way to something like the Vive Focus Plus, HTC’s upgraded standalone (but also very business-oriented) VR headset that now comes with two, Pro-esque six-degrees of freedom controllers instead of a single waggle wand like its non-Plus sibling. 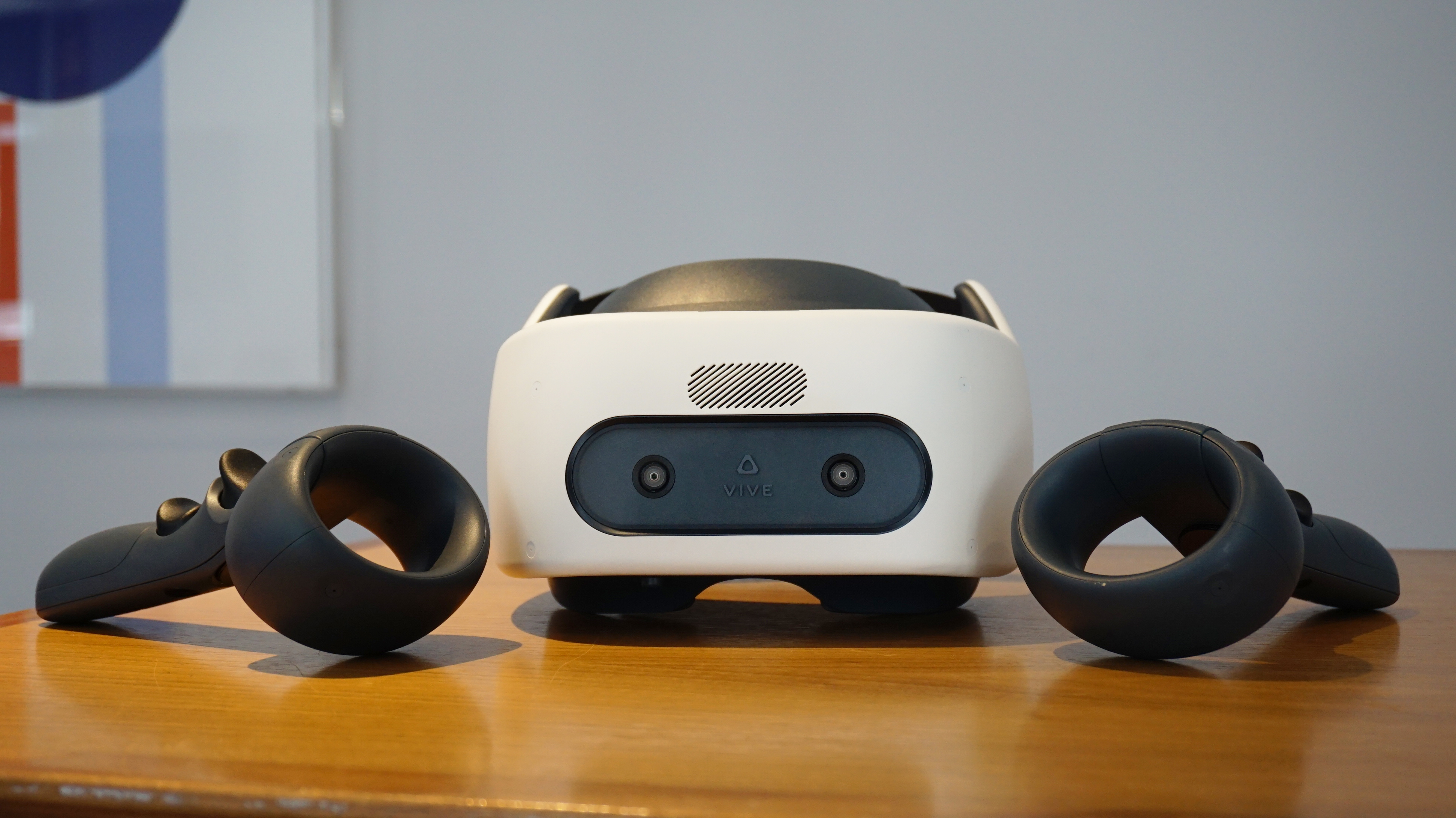 The Focus Plus gets even more bonus points for its cute, but constantly shocked robo cartoon expression.

You see, there was also a srs bsns demo for the Focus Plus during my session with the Pro Eye, and while the 75Hz refresh rate left something to be desired (at least compared to the Pro and Pro Eye’s 90Hz refresh rate), my jaunt up a crane to replace a light bulb in Immersive Factory’s health and safety training simulation was just so much more involving when I didn’t have to worry about tripping over a headset wire.

Even better, I can just pop the Focus Plus on my head and off I went, no extra setup required. That’s the kind of VR experience I want at home, not all this worrying about whether I’ve got enough room and whether my external sensors are about to fall off my tower of precariously stacked boxes. Sure, there’s always Vive’s Wireless Adapter, but I’m just not made of that kind of money. I want the easy route, and I think that ultimately means I’d rather go down the Vive Focus route, than put up with the hassle and sheer expense of something like the Vive Pro. Or maybe it means I should really be saving up for a Vive Cosmos, HTC’s other new VR headset on the horizon that also promises out-of-the-box VR for a “premium PC” experience. That sadly didn’t make an appearance at my demo session, and there’s currently no word on whether that will support eye-tracking either.

Still, based on how Vive is progressing on the businessy side of things with the Pro Eye and Focus Plus, I am a bit more hopeful now about what the future holds for consumer VR. It’s probably still going to take a while before eye-tracking and the like trickle down into something that’s a) affordable, b) doesn’t make you sick, and c) actually good, but I’m cautiously optimistic it’s moving in the right direction, which, for now, is enough to drown out the only other inevitable conclusion to the whole VR adventure bubbling away in the back of my brain, and that’s for the whole thing to collapse in on itself before we ever even get to that point. Still, with the Oculus Quest seemingly gaining more and more momentum these days as well, it’s surely only a matter of time before that dream VR headset of mine becomes a reality.