I was a big fan of Asus’ TUF Gaming K5 mech-brane keyboard when I looked at it last month, so today I thought I’d turn my attention to its equally TUF mouse companion, the Asus TUF Gaming M5, and see if it’s best gaming mouse material. See what they did there? Coated in the same durable TUF stuff that makes it more resistant to sweat, friction and general abrasion than your average PC peripheral, this tiny, sort of ambidextrous mouse should hopefully last a bit longer than its similarly priced £35 / $40 competition. Here’s wot I think.

Of course, long-term durability claims like this are always difficult to test without equally long-term daily usage, by which point a review of the thing is practically useless because it will have either gone end of life by then or been replaced by something else. But given how impressive the TUF Gaming K5 keyboard was when it came to its spill resistance, I’m inclined to take Asus at their word here.

Admittedly, the M5 isn’t spill resistant like its K5 sibling, so it’s liable to break just as easily as other mice if you accidentally knock a drink over it. But it is meant to be 1.5x more friction resistant, 1.5x more sweat resistant, and 5x more resistant to abrasion, which will hopefully help keep it in better condition for longer than other mice in its £35 / $40 price range. 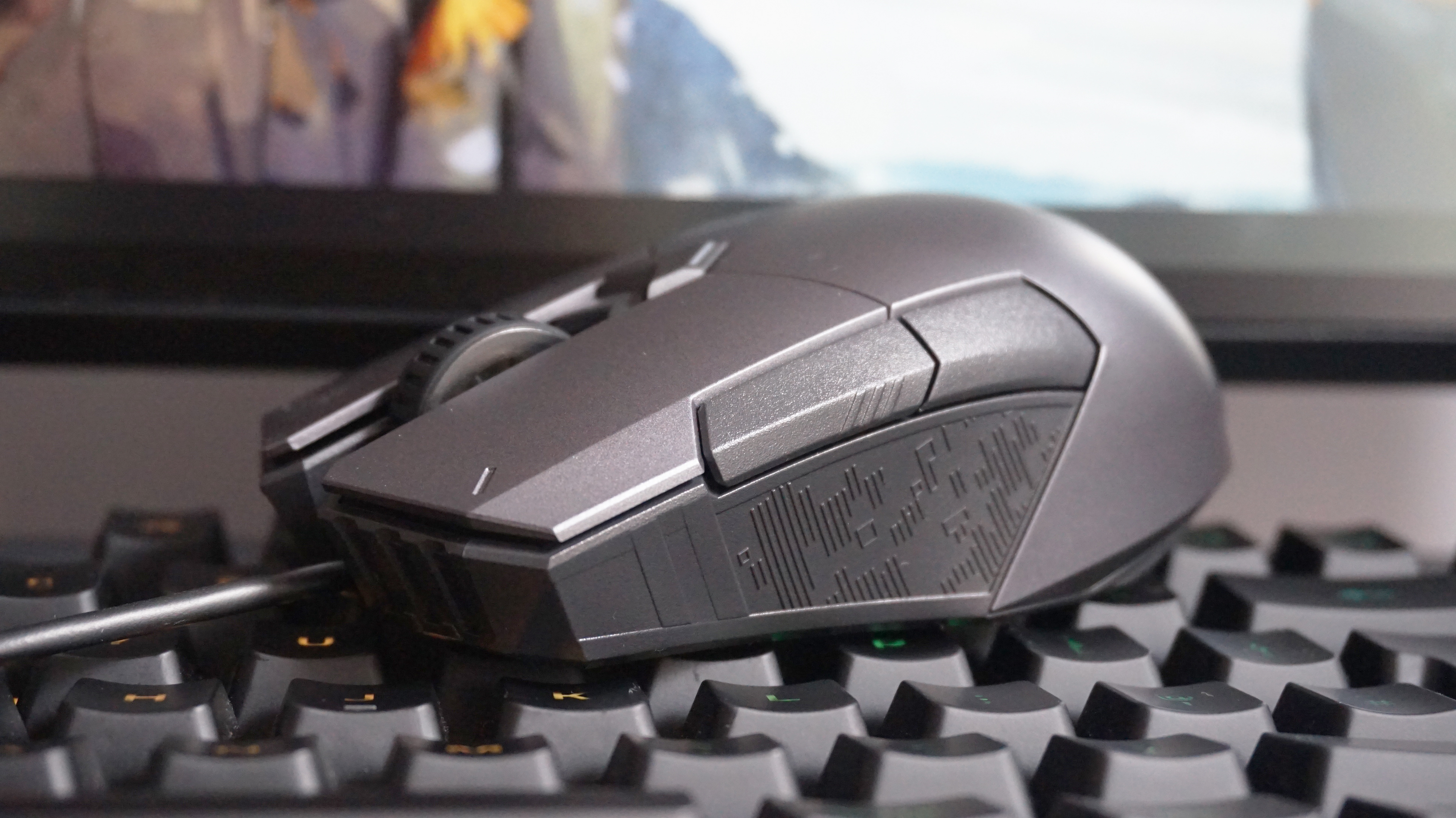 It is, however, quite a small little thing, and its dimensions of 111x61x42mm feel positively tiddly under the palm – especially after the palm-hogging Corsair M65 RGB Elite. It’s fine if you’ve got tiny hands like mine, but I suspect larger-handed individuals may find it a tad petite.

For the mini-fingers among us, however, the TUF Gaming M5 does feel well-proportioned – or at least it does if you’re right-handed. For despite having an ambidextrous shape, the absence of any buttons on the right-hand side of the mouse means lefties are still going to be stuck using their little finger to hit the TUF Gaming M5’s two programmable side buttons. It’s doable, just about, thanks in no small part to their large size and well-positioned location, but it still requires a degree of strength and digit dexterity that’s so much less convenient than simply moving your thumb up a bit.

For the right-handed, mini-fingers among us, then, the TUF Gaming M5 does feel pretty good. The side buttons were easy to hit regardless of whether I adopted my lazy palm grip or more of a laid-back fingertip grip, and if you’re not happy with their default backwards and forwards web-surfing controls, you can always assign them a different function using Asus’ ROG Armoury II software. 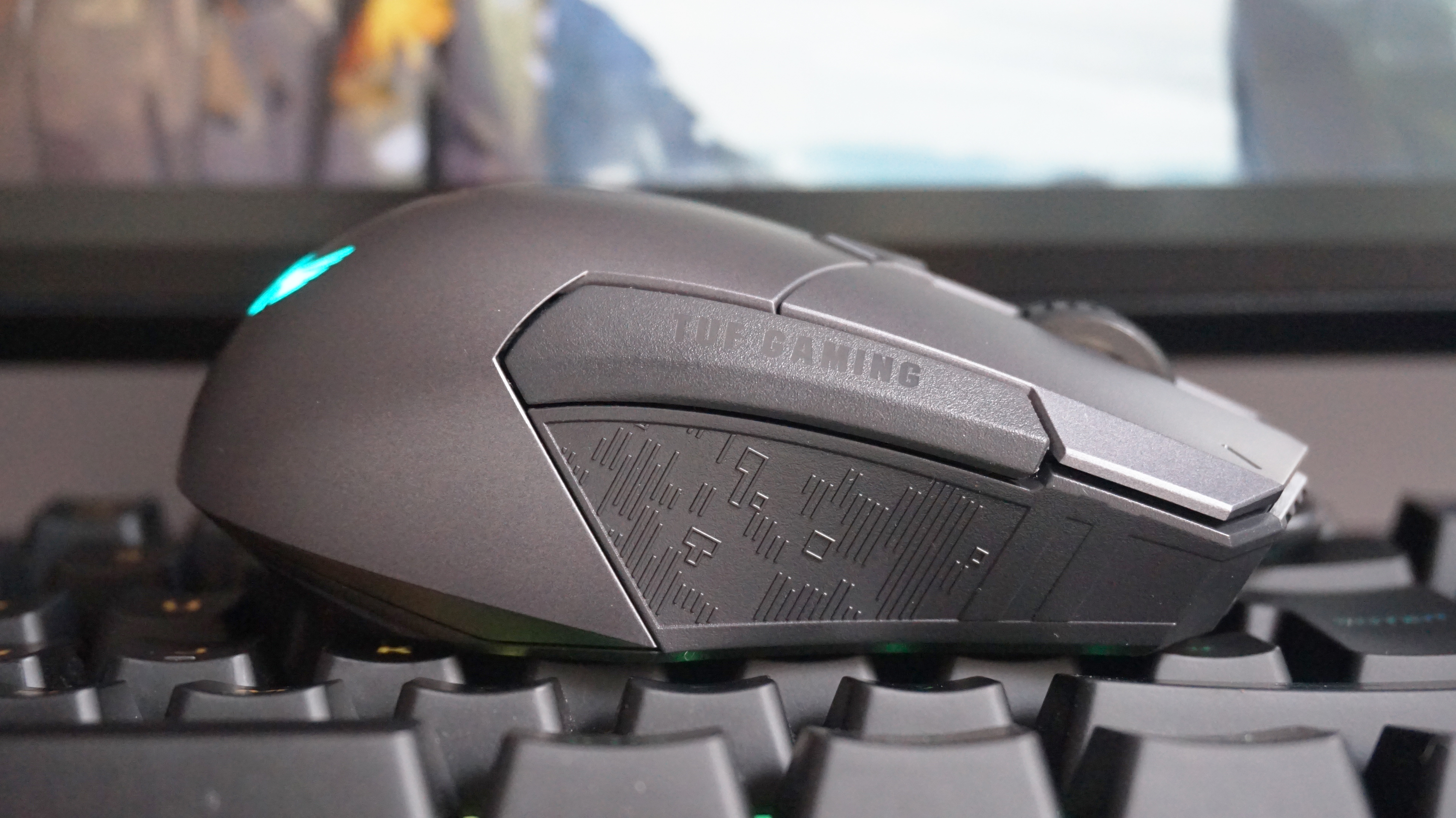 Alas, that isn’t one long button on the right hand side. It’s just another logo-fied plastic panel.

This gives you a decent number of programmable options to pick from, such as keyboard functions, programmable macros, Windows shortcuts and multimedia controls, but anyone hoping for an on-the-fly DPI sniper-type control to give them an edge in competitive FPS games will have to look elsewhere, as the only DPI function available on this particular mouse is the default DPI Switch function, which is already assigned to the central button underneath the scroll wheel. It’s not the end of the world, all told, and I’m not really that surprised by its absence given its more entry-level price.

More surprising is its rather limited DPI range of 100-6200. In truth, unless you’ve got bionic eye sockets, no one really needs anything higher than 3000 DPI, let alone 6200 DPI, but when the even cheaper £25 / $25 Steelseries Rival 110 offers up to 7200 DPI, it just doesn’t feel like you’re getting as much for your money here. I wouldn’t mind so much if the TUF’s DPI Switch button let you change between more than just two different DPI speeds, but even that isn’t any better than what you get on the Rival 110. 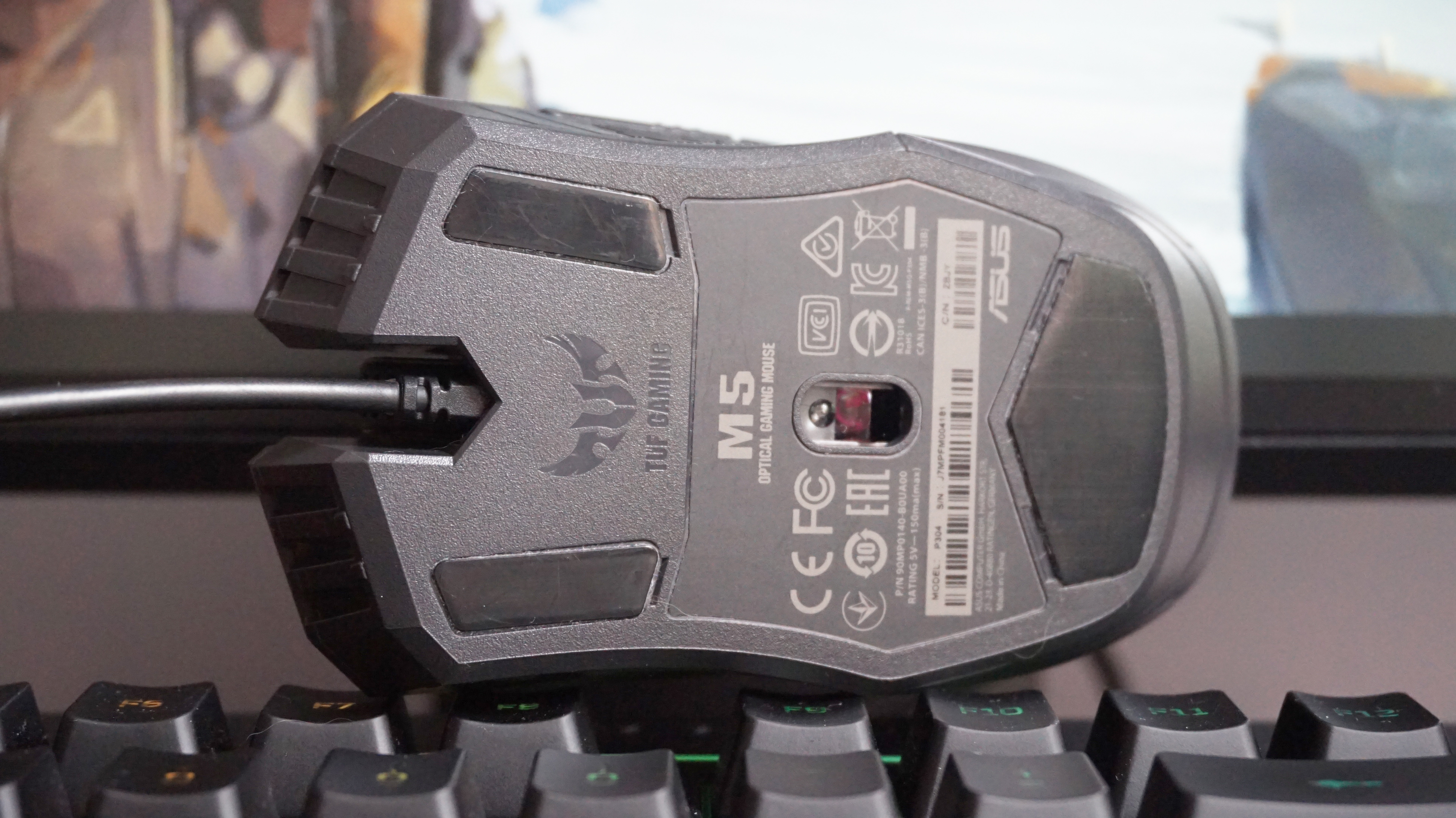 Indeed, you only need to spend a tenner more than the TUF Gaming M5 to get Steelseries’ properly ambidextrous mouse, the Sensei 310, which is currently going for £45 / $50 at time of writing. While that also only has two DPI settings, it does come with a wider DPI range of 100-12,000, and eight programmable buttons instead of six (including two on the right for lefties). This puts Asus’ diminutive mouse in a rather awkward position. Do you want to compromise on price for that extra durability, or would you rather your money go a bit further with either one of the Steelseries mice?

If you’re after an ambidextrous mouse for left-handed use, the Sensei 310 is an absolute no-brainer. It’s more expensive, sure, but lefties can actually use it properly instead of having to contort their pinky finger to hit its extra buttons. Right-handed mousers, on the other hand, are probably still better off going down the Steelseries route, if only because both the Rival 110 and Rival 310 (the right-handed version of the Sensei 310) are that bit larger, making them a better fit for a wider range of hand sizes.

The TUF Gaming M5 is still a decent option if you’d adamant on getting something small, but for everyone else, you’ll almost certainly get more for your money by opting for one of the Steelseries.