This is The Basement Of Curiosity, a weekly Dwarf Fortress diary chronicling Nate Crowley’s attempts to build an illegal, underground zoo in everyone’s favourite text based dwarf management game.

Last time on the BoC: The dwarves began digging out some grand new accommodation, and the chef Ushat built a legendary chair called the Hot Thrower, featuring a cool picture of a leopard. The tantrums of the furnacehand Udil grew more intense – and so did conditions in the Basement’s zoo, thanks to the chthonic, squawking sorrow of the Bird Hole.

Winter, such as it is in the equatorial swelter of the Jungle of Hides, arrives – and it brings with it a goblin siege. This time, however, the “siege” comprises a meagre half-dozen goblins, who mooch around for a bit, before bullying a leopard and some dingos into their graves. The dwarves eye each other slyly as they watch this understrength rabble… surely, they think, they could open the gates and rush the bastards? But no: mayor Urist’s orders are as rigid as granite. When goblins are abroad, the fort stays sealed.

In the end, the dwarves’ patience is rewarded. Only five goblins manage to leave the map at the siege’s end, the sixth having been caught in one of Lorbam’s crafty cage traps, and the zoo has won itself a new inmate.

As the siege lifts, the dwarves are in a celebratory mood, and it’s decided that the Great Harvester, the fort’s tavern, needs a proper innkeeper. Given that he’s still recovering from his injuries, and spends most of his time hornily watching performances in the Harvester anyway, this seems a perfect job for Id the Snakebuster, and so he takes up a new career as a pub landlord.

Under his watchful, twinkling eye, the dwarves have a proper rave. A whole gaggle of revellers, including the visiting consort of a Dwarven baron, line up like a soviet army choir, and roar drinking songs down at the Bird Hole from the Harvester’s mezzanine, each of them as pissed as a lord. 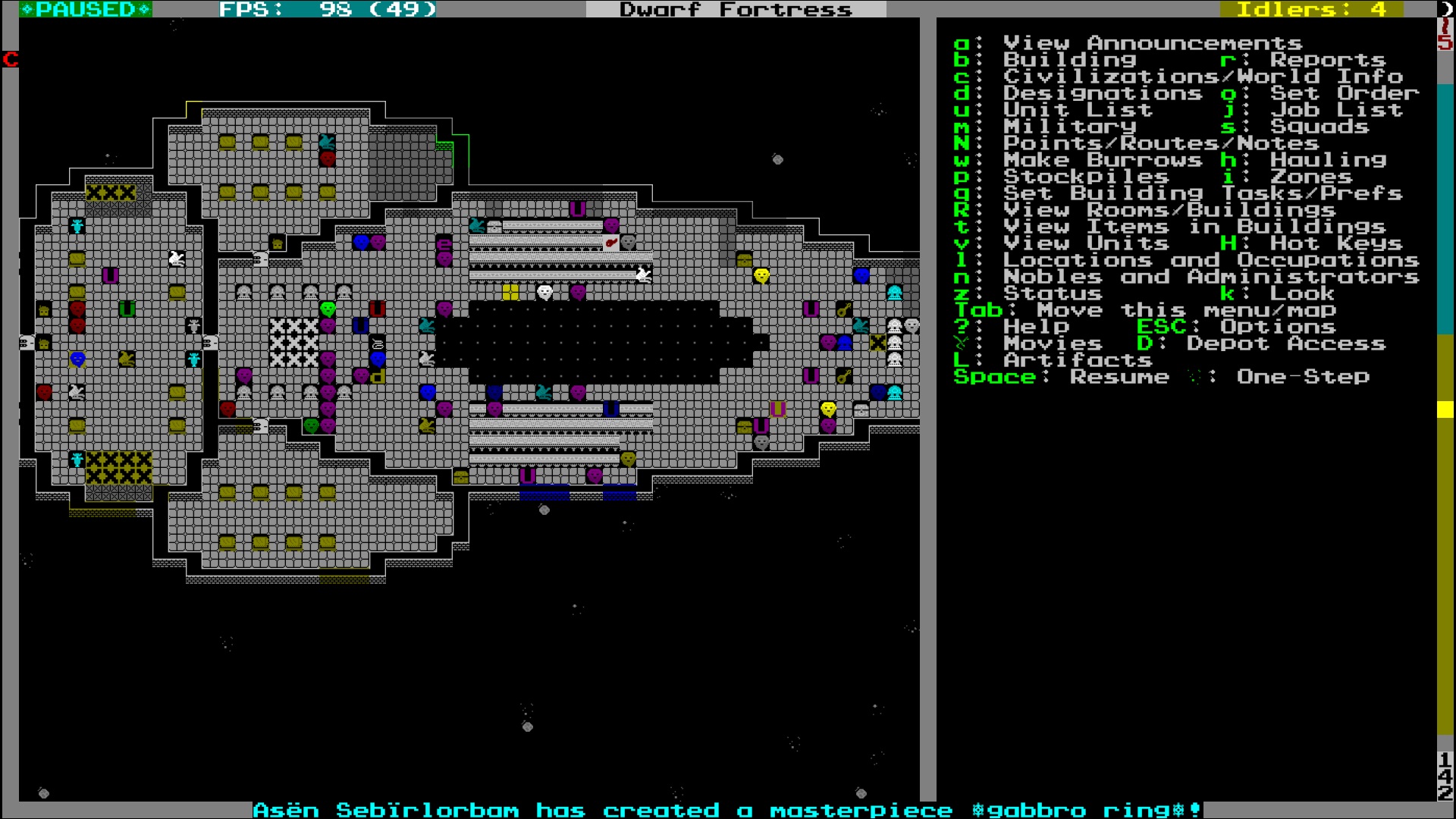 As an exquisite detail to this scene: it was at this point I noticed that dwarves kept getting tasked with putting birds back into the Bird Hole. It seems that in their distress, turkeys and ducks kept crawling out of the sordid pit, only to be jammed back in by cheerful, ruddy-cheeked dwarves.

But while the fort is alight with merriment, dark deeds are taking place in the shadows. Down in the depths, on the great spiral staircase being hacked into the underworld by miners Nil, Ineth and Tirist, a murder has taken place. A few levels below the forge complex, the steps are splashed with blood, with a book and a musical instrument lying in the sticky red pool.

Further investigation finds that the blood’s owner – a human bard called Egesh – managed to stagger down to the crypt complex, in the very bowels of the fort, before expiring, slumped over one of the mausoleums. Although the identity of their assailant is unclear, the wound on their body leaves no doubt as to the cause of death: the bard’s neck has been punched apart. 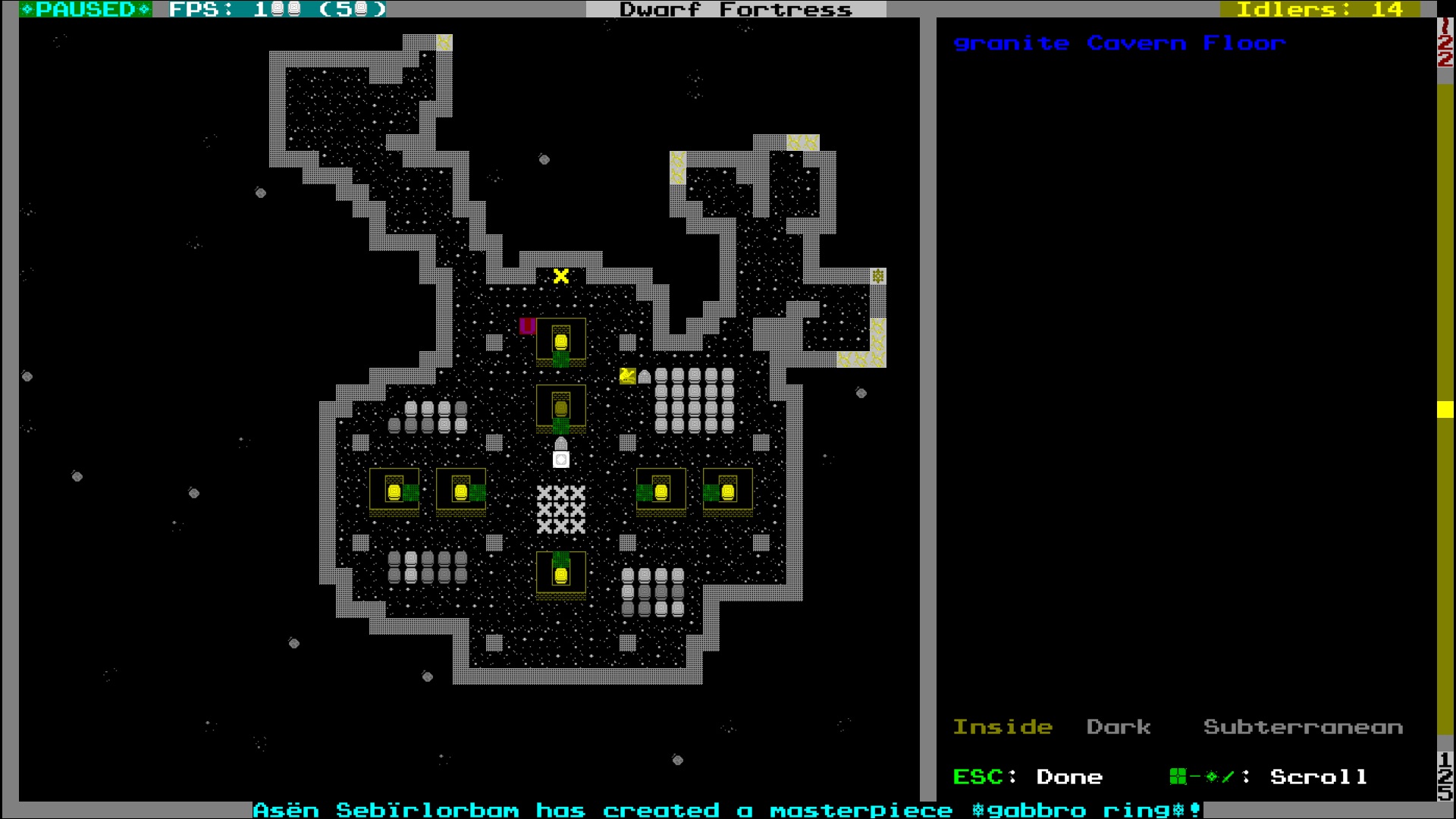 That red-surrounded ‘U’ is the dead bard. By the way, the book he dropped was self-authored (and presumably self-published), and appeared to be a list of poorly-written complaints about his former mentor, a dwarf called Besmar Graniterose. The musical instrument he dropped was a mes – a wooden horn that makes a sort of pathetic, reedy noise. All in all, I think this guy’s death was no great loss.

Immediately, there is a prime suspect: Udil, the increasingly distraught furnacehand, has been throwing plenty of tantrums, and has already made a name for herself as a bit of a bard-lamper. With no witnesses to this particular decking, she can’t be prosecuted, but Urist immediately orders the construction of a dungeon on the level below the crypt, and names the kindly herbalist Oddom its sheriff. If there’s so much as a hint of another fistfight, there will be consequences.

When reviewing who to appoint as the fort’s Chief Cop, I noticed Oddom’s surname was “cudgelright” – and that was that. It had to be him.

Despite the quiet threat of the dungeon, however, the fort’s revels continue into the winter. On the 24th day of the month of Opal – which I think corresponds to December, therefore making this Dwarven Christmas Eve – who should show up again but the famous performance troupe the LIZARDS OF ORDER, with a request to remain as citizens. The request is granted without question.

I imagine the Lizards as a trio of dwarven rappers, who do the beastie boys thing of shouting the last word of every line as a team. This is what I think they rap in their first performance as permanent residents of the fort:

(At this point, someone begins to make record scratching noises on a stone wheel, and Id – who was always an accomplished dancer – begins to slowly, painfully breakdance.)

It seems not everyone is a fan of the Lizards, unfortunately. No sooner have they started to perform, than Udil shrieks in rage and smashes a poet in the chest, flying into yet another wild tantrum. Punches are thrown left and right as the Lizards rap, and soon the fight spreads across the entirety of the Harvester as Udil’s victims attempt to charge her, miss, and run straight into other angry dwarves. 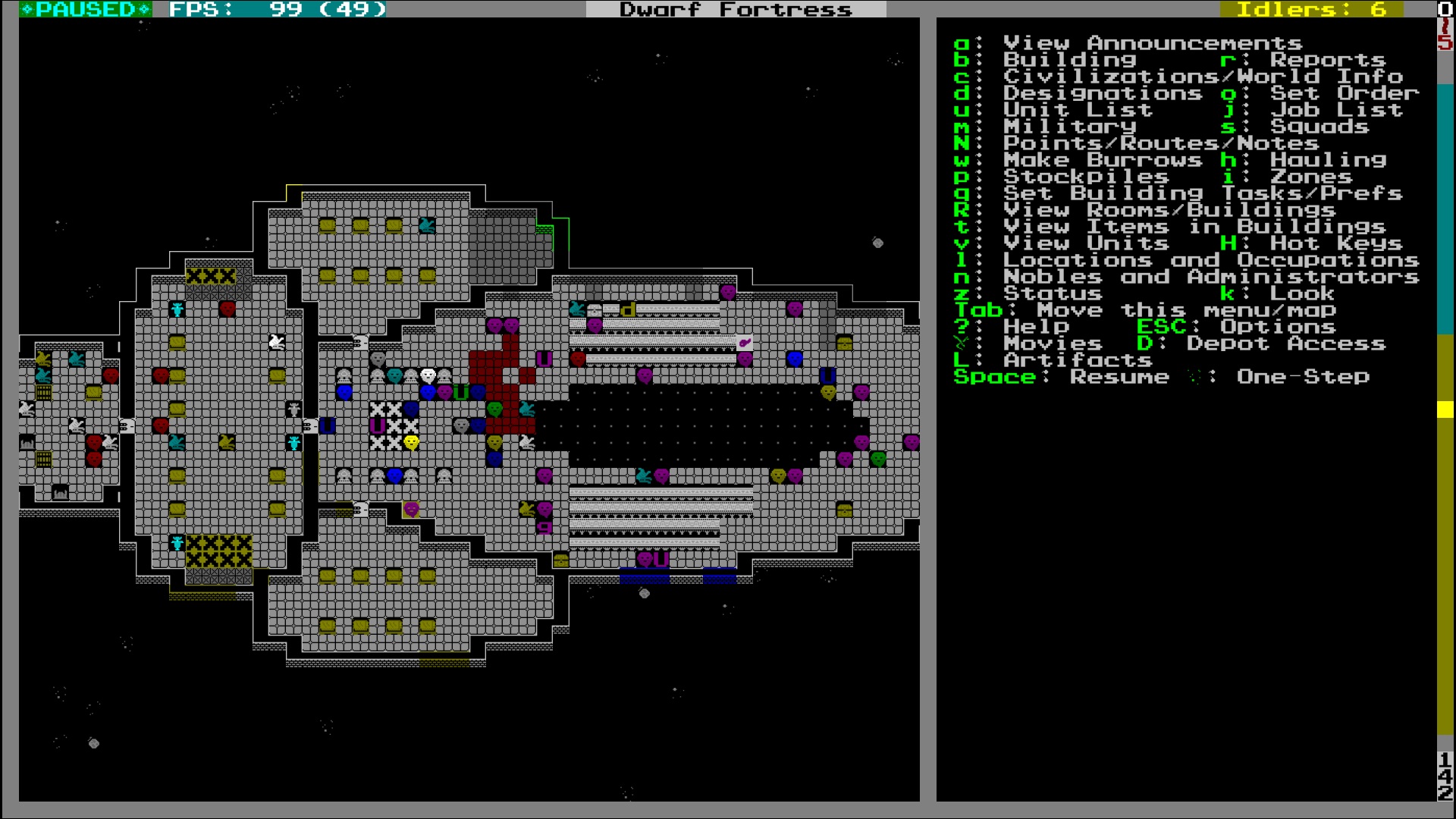 Blood spreads across the tavern floor.

A group of enraged bards are kicking each other in the knees, hollering in outrage as patellas crack and tendons pop. The fort’s butcher, Dodok, starts wailing on a visiting foreign axedwarf, only to have their arse absolutely handed to them by the burly soldier. The dwarf’s axe swings, and the fingers of Dodok’s left hand spill onto the floor like grubby cocktail sausages.

And in the midst of the mayhem she’s created, bloody Udil just scampers cheekily down the pub stairs and leaps into the Bird Hole. There she proceeds to crowdsurf on a mass of traumatised poultry, kicking blindly into the feathers, as furniture rains down from the tavern above. By the time she’s calmed down, the floor is awash in chicken juice, and the pub floor above is littered with the wounded. Many dwarves end up in hospital, soundly beasted by their fellows. 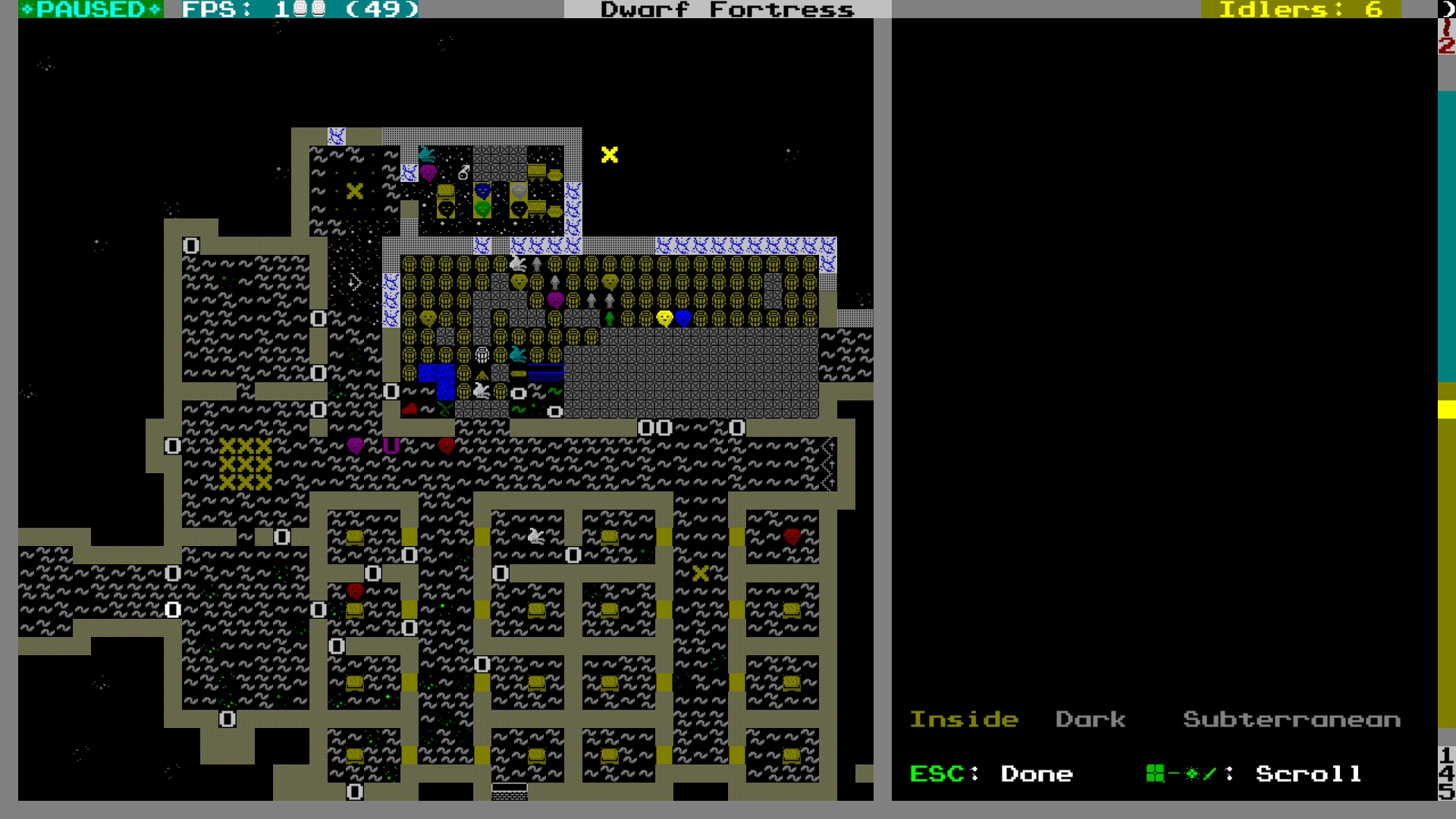 The aftermath in the hospital (top). Looking at this reminds me how much this whole floor of the fort isn’t fit for purpose. Not sure what I’ll turn it into once the various bits are moved out, mind.

And yet, despite the flagrant hooliganism, Oddom will not arrest Udil. The malevolent furnacehand walks free, winking menacingly at the bards who remain on their feet, and goes back to her business. This does not mean the jail is empty, however. Chained to the floor are Goden the weaponsmith, whose blades held back the goblin tide last summer, and Udib the engraver, widow of the war hero Eshtan. Their crime? They hauled bracelets to the trade depot, when Urist had forbidden their sale. Dwarven justice is a fucking disgrace. 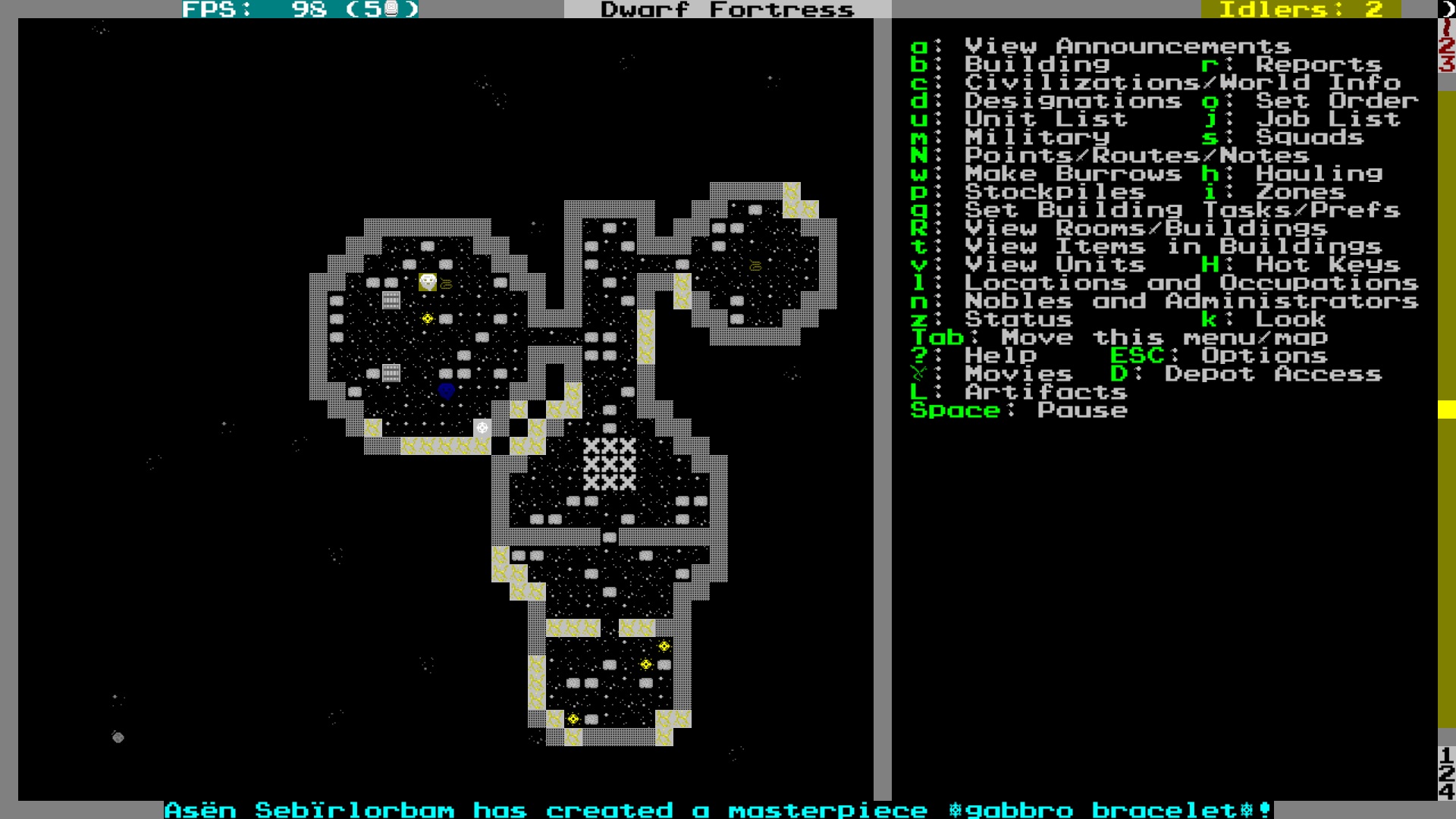 The beating heart of the dwarven police state. It’s still fairly rough down there, but that’s how you want a dungeon, really.

But it hasn’t just been a winter of pub violence. All through the season, the fort’s cadre of miners have been digging their careful way downward, stopping to carve out pockets of precious gold along the way, in search of the fabled underworld which Lorbam dreams of plundering for her zoo. And finally, on the eve of spring, they break through. 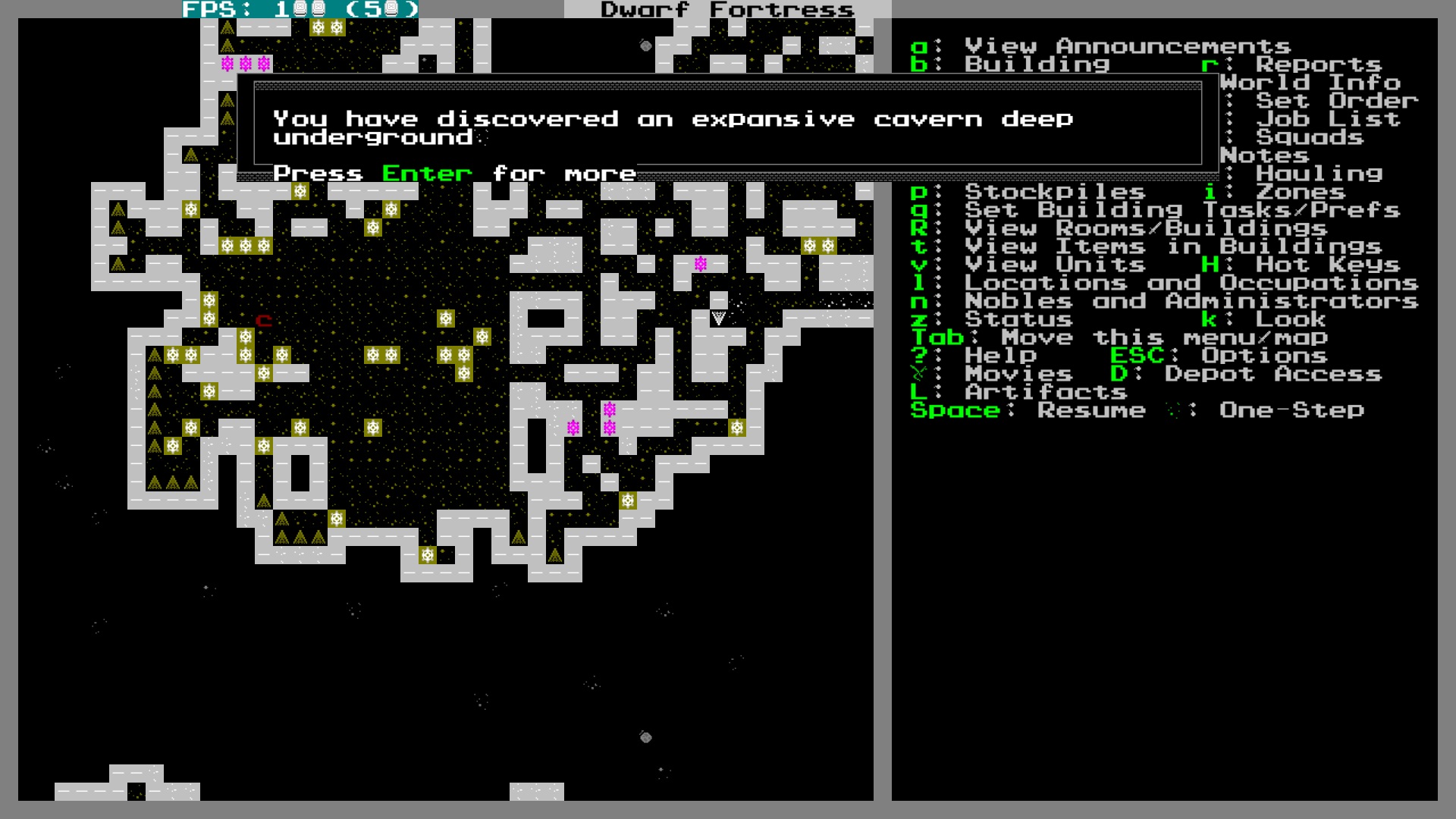 The cavern is a vast labyrinth of twisting, web-clogged passages, with its upper galleries twice as far down from the surface as even the new dungeon. Its floor is caked with mud, and from its lowest reaches come the lonely plops of drips falling into still water.

The dwarves brick up the breach they have made as soon as it is opened – the settlement of this place will require careful planning, after all. But as they mortar the last stones in place, a thin cry echoes up the fort’s central staircase, all the way to the surface: the hunting cry of a giant bat. Despite everything, Lorbam’s scarred face cracks into a smile. 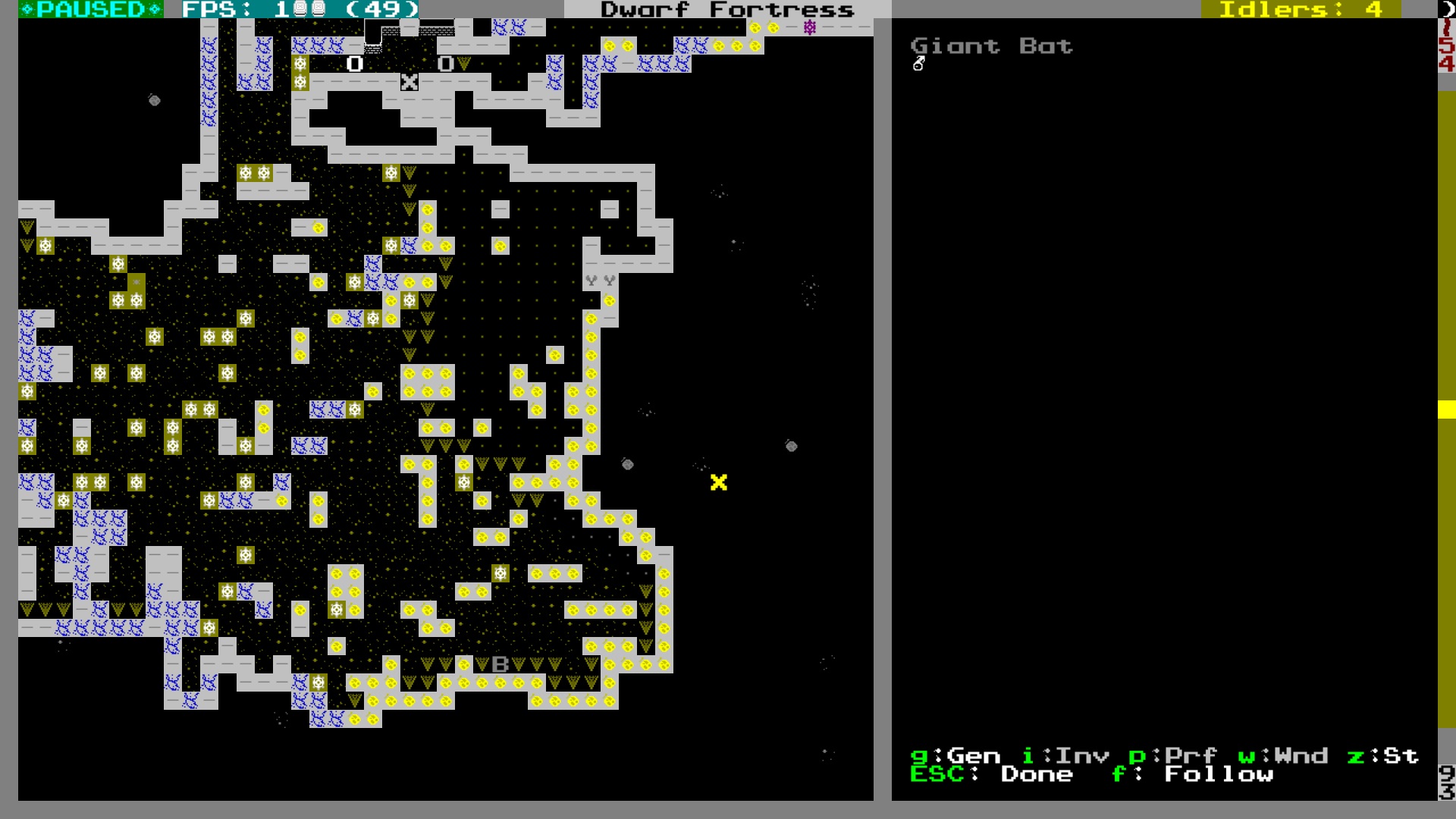 There it is – the Giant Bat. There’s loads of other stuff down there too – so far I’ve sighted a troll, several of the weird horned vermin known as crundles, a giant cave swallow, and some of the manlike horrors called troglodytes, which I suspect are something like the (genuinely nightmarish) things from the movie ‘The Descent’. should be super fun exploring this place.

Next time on the BoC: Once again, the exploitation of the underground is delayed by brutal infighting. The zoo gets another massive upgrade, and we learn more about The New Hamlet.