Over in LA, Frontier Developments have just shown the latest trailer for their upcoming menagerie-’em-up Planet Zoo, as well as setting a launch date for November 5th – and it’s looking very powerful indeed.

I’ll be straightforward with you here: with the exception of the extremely relaxing Megaquarium, I’ve always been disappointed by zoo games. And that’s not because I’m not into the concept. I spent a good slice of my childhood making zoos for toy animals out of tupperware and wooden blocks, and more of my teens than is normal drawing designs for reptile houses on graph paper. I even worked in a couple of zoos (although that’s a story for another time), and I’ve been to loads of the good ones.

I have spent my life dreaming of a good zoo game, but every attempt at one I’ve played has either ended up feeling creatively restrictive, or overly simplistic. If I’m being honest, even Frontier’s last animal-keeping game – Jurassic World Evolution – was a bit of a let-down for me, despite some very strong components. However, having watched twenty minutes or so of Planet Zoo being played by developer Lisa Bauwens (who would make a hell of a tour guide, by the way), I’m unashamedly sold on the whole business, to the extent where the game has shot to the top of my “most anticipated” list. 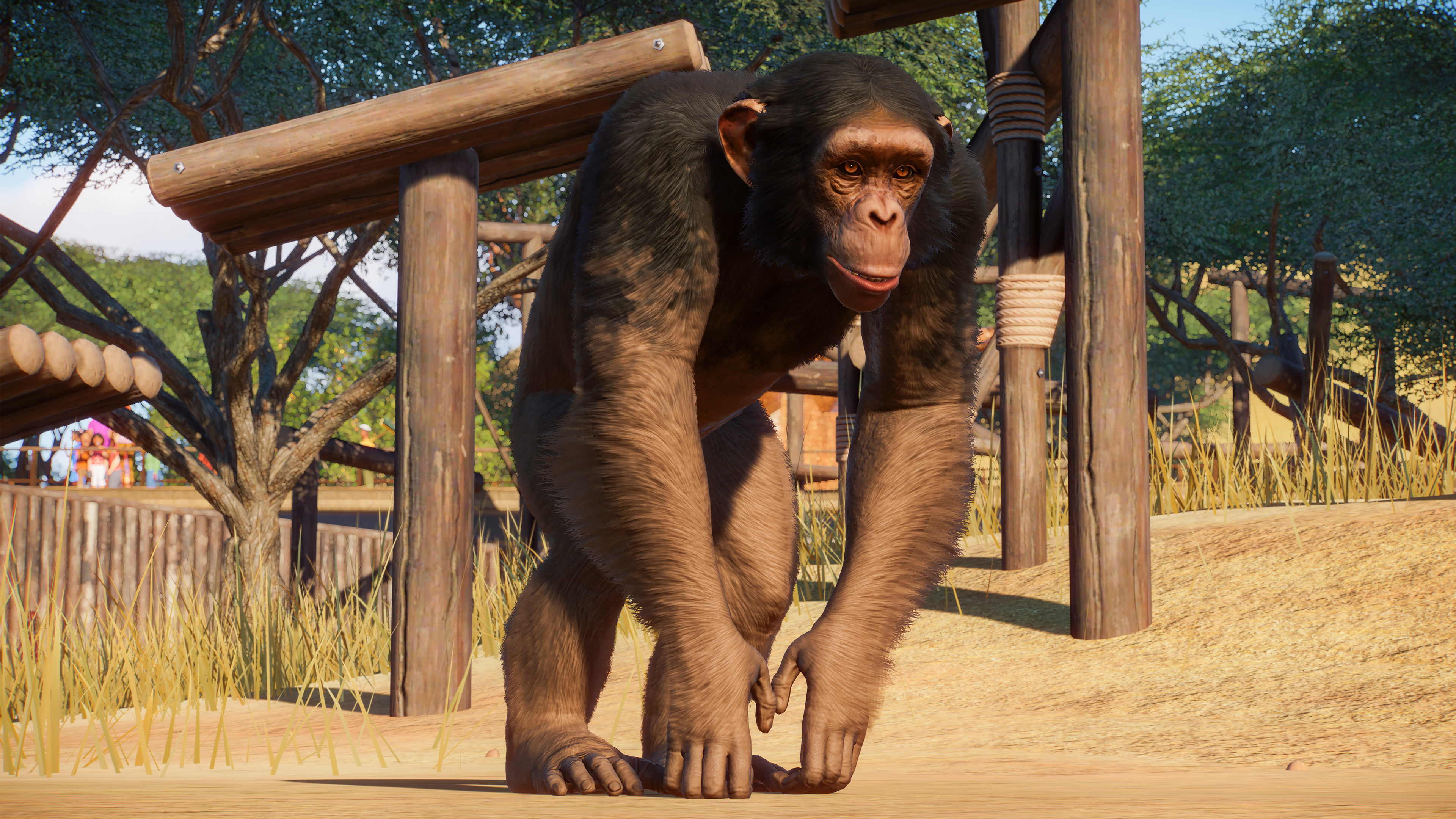 Chimps evoke a deep horror in my soul, but I’m still glad to see them here.

Yeah, the animals look great. I mean, more than great – they look real, and not just in their photorealistic textures, either. Their movements – from big stuff like eating and running, right through to tiny ear twitches – is perfectly observed, and seems very deeply modelled indeed. Oh, and they’ve all got simulated genetics, with many species’ individuals having unique markings.

But frankly, I wouldn’t care if they were crudely drawn sprites (after all, please bear in mind that I’m currently writing a diary about my attempts to build a zoo where the animals are ASCII characters). It’s the behaviour of Frontier’s animals that really astounded me.

Their actions at any given moment are governed by an astonishing span of different stimuli, and it was genuinely thrilling to float round Lisa’s zoo, seeing what the different animals were up to at different times. On one trip to look at the chimps, we saw the saltwater crocodiles lounging on their beach, while on the return trip, one had hauled itself into the water for a bit of a float. These weren’t random wanderings or animation loops, but the decisions of simulated animals reacting to their player-created environment. 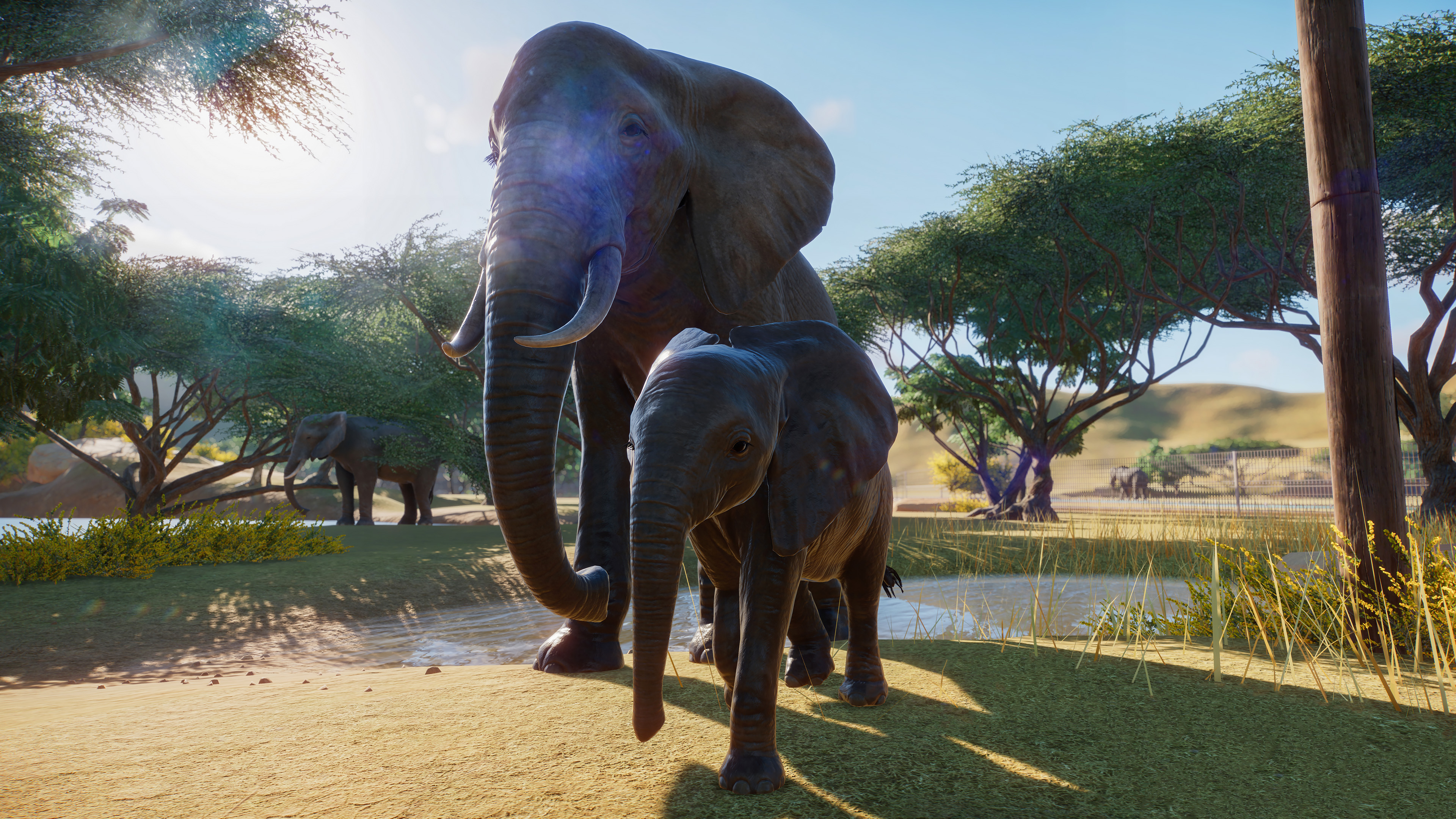 The big man himself

That environment is my other big hope for Planet Zoo. Building on the precedent set by Planet Coaster, it seems you’ll have a highly granular level of control over the physical shape of your zoo, with a dizzying number of materials and objects to put in play, as well as heavy terrain modification tools.

It seems the driving theme for this game, from Frontier’s perspective at least, is detail – the ability to zoom in from the big picture to the smallest details. And for me, the very best bit of it all (if they get it right, that is), is the fact that this ethos applies to animals too.

So many zoo games – and so many zoos – completely ignore smaller creatures and enclosures in favour of charismatic megafauna like elephants and lions. This is a shame to me, because it’s always those smaller things I enjoy the most. As such, the moment I found out Planet Zoo would let me build inside exhibits full of terraria for reptiles, invertebrates and more, was the moment I became a thrall to its promise. Finally, my reptile houses will no longer be confined to graph paper.

Please don’t break my heart by messing this up, Frontier – you’re onto something great here.