I’ve got two completely separate takes on Maneater. It’s almost as if I split into two people when watching the gameplay footage released at E3 — two fizzing outlines of myself, roughly tethered to my physical form like a bad 80s special effect.

One of those outlines, the crackly red one, loved it. I think he’s my inner nine year old, who used to entertain himself on long journeys by imagining a shark zooming alongside the car, crunching oncoming vehicles in its jaws and doing sick flips over roadsigns and overpasses. Maneater is his game. The ghastly fluidity of the game’s protagonist – a ten foot bull shark – is immensely satisfying to watch. It whooshes along like a brutish Ecco the Dolphin, slamming into hapless swimmers from below, then propelling them fifty feet into the air before grunching them with a sound like a kilo of raw chicken cartilage in a hydraulic press.

The other outline, the soft blue one who used to work in a public aquarium, was significantly less impressed. He used to tell visitors that an average of five people are killed by sharks each year, while people kill — at a conservative estimate — around one hundred million sharks. Those visitors would nod with telegraphed concern, then move on to the viewing windows, where they would playfully shake their kids’ shoulders and growl “look at the shark, Henry, he’s gurna eat yer! Rahr!” (Oh, and of course: the sharks in Maneater roar.)

That’s all well and good, the Red Nate says, but Maneater’s not meant to be a realistic portrayal of a shark, is it? It’s a game. I mean, you don’t see many hedgehogs spinning around and popping robots by jumping on them, do you?

No you don’t, says Blue Nate, but if the game wanted to divorce itself from reality, maybe it shouldn’t have constant voiceover from a faux documentary narrator, saying stuff like “Sharks will attack man whenever and wherever the two shall meet”? While it’s an inventive gimmick for sure, there’s something really grim about borrowing the apparatus of authoritative non-fiction to spout constant lies over gameplay.

Yeah, but the voiceover is done by Chris Parnell off of Archer, interjects Red Nate.

It doesn’t matter, snaps Blue Nate (although it does, a bit). Wouldn’t it be great, he offers instead, to apply the same gimmick – Parnell and all – to a realistic, educational shark simulation along the lines of sober dinosaur sim Saurian. Imagine a game where you do actual shark stuff like hunting seals, migrating, and avoiding being beasted by dolphins and factory ship nets – wouldn’t that be interesting enough to hold consumer attention? 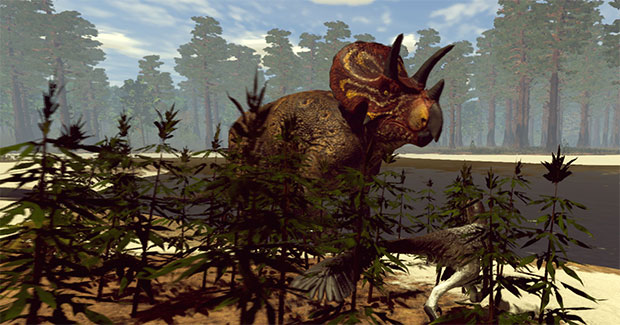 Saurian was made in consultation with a small army of palaeontologists, but the awkward truth is that it’s not that thrilling to play unless you’re absolutely fascinated with dinos

Well maybe, concedes Red Nate, but it wouldn’t be as cool as one where you bite the crap out of people and make boats explode. After all, a game based on what people think sharks are allows for some brilliantly satisfying, visceral stuff – hunt, eat, get stronger, hunt more, get points for creative kills. It’s the sort of thing guaranteed to make rooms full of reeking, shirtless teenagers roar the word ‘sick’ at the screen. And the proof is in the pudding: Steam is already clogged with shitty games with the exact same premise, and you can hardly blame developers Tripwire for deploying their talent and budget to where the money clearly is?

Well yeah, you can, says Blue Nate, getting a bit ticked off. He’s altogether fucking sick of a view of nature where animals are divided into “good to eat”, “entertaining” and “will try to kill you”, with everything in the latter category hammered down to blunt, psychotic simplicity in order to fit the narrative. It’s a view of nature where animals don’t matter at all in their own right; only in how they relate to humans. Indeed, even the game’s name — Maneater — reduces the shark’s identity to its relationship with people. 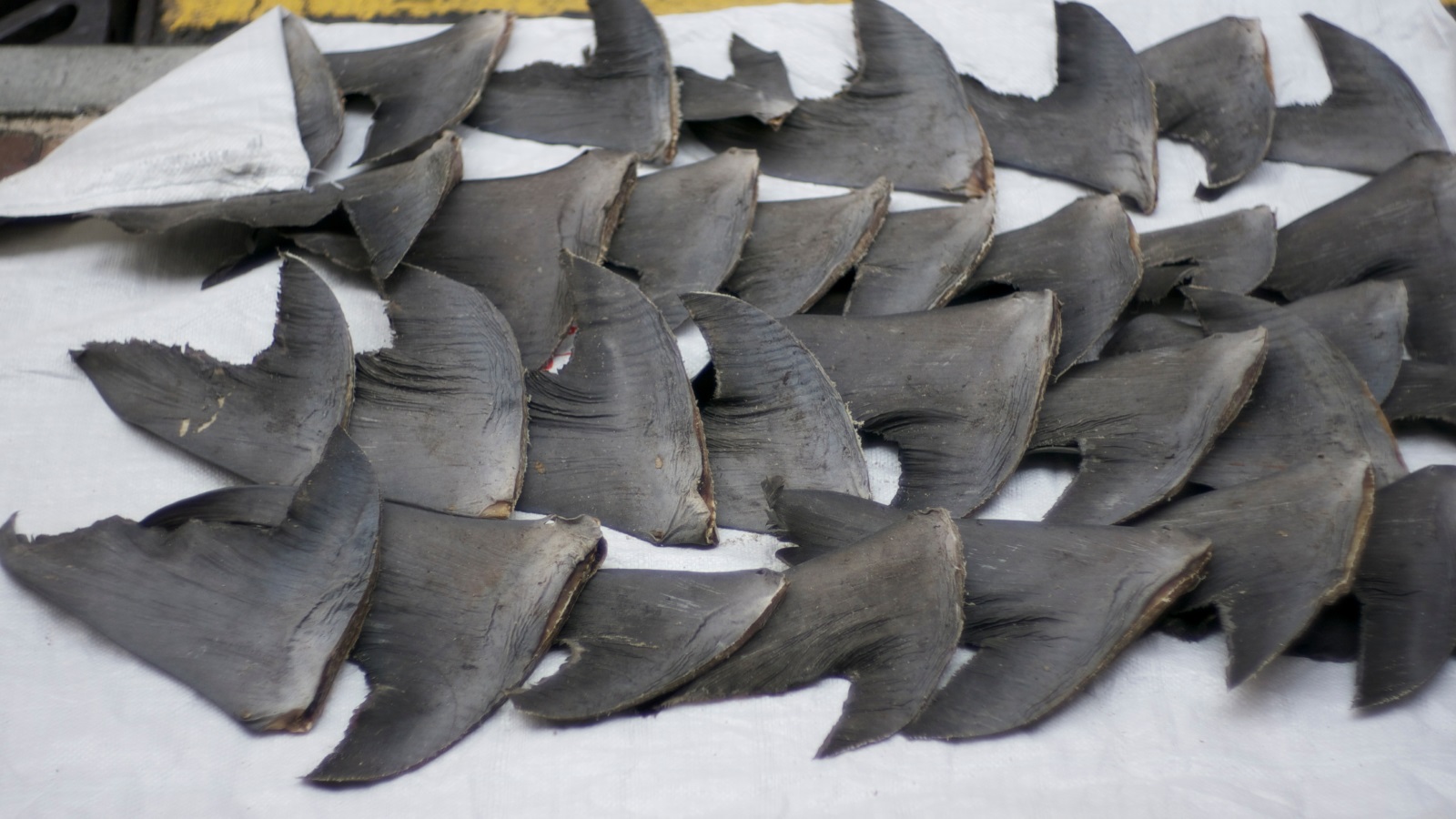 Every year, tens of millions of sharks are caught for their fins, to use in soup. The sharks don’t even get eaten, and they’re generally not even killed – they’re just chucked back in the water without their fins, to die a slow and helpless death. BUT THEY’RE GURNA EAT YER! RAAAHHHHHR!

Come on Blue Nate, says Red Nate, waving his arms to placate his other self. The developers have made it clear that the shark you play as had its mum killed as a pup, so it’s an outlier, out specifically for revenge against humans. But Blue Nate’s not convinced. Although he’s at least happy Tripwire have acknowledged that bull sharks are viviparous, he reckons the shark’s tragic backstory is little more than a crowbarred-in excuse to play the Monster Shark trope straight down the line.

Genesis 1:26, he says, getting back to his diatribe, has a lot to answer for: (“And God said, Let us make man in our image, after our likeness: and let them have dominion over the fish of the sea, and over the fowl of the air, and over the cattle, and over all the earth, and over every creeping thing that creepeth upon the earth.”)

This commoditisation of nature is what leads to people smashing on the windows of ape enclosures, demanding that bored gorillas get up and dance in order to justify their existence. It leads to factory farming, and dentists posing next to dead lions, and the demolition of rhinos to make dick medicine.

Alright then you sanctimonious bellend, shouts Red Nate, interrupting his counterpart in full flow. What if Tripwire added a game mode similar to the education mode in Assassin’s creed: Origins, in which you can play as a shark doing realistic shark stuff?

That would be good, says Blue Nate, a little crestfallen.

But nobody would play it, would they?, says Red Nate.

Well, I would, says Blue Nate, in a small voice. There’s a heavy pause, and then Red Nate speaks up in a whisper.

You’d blatantly have a go on murder mode first, though, wouldn’t you? 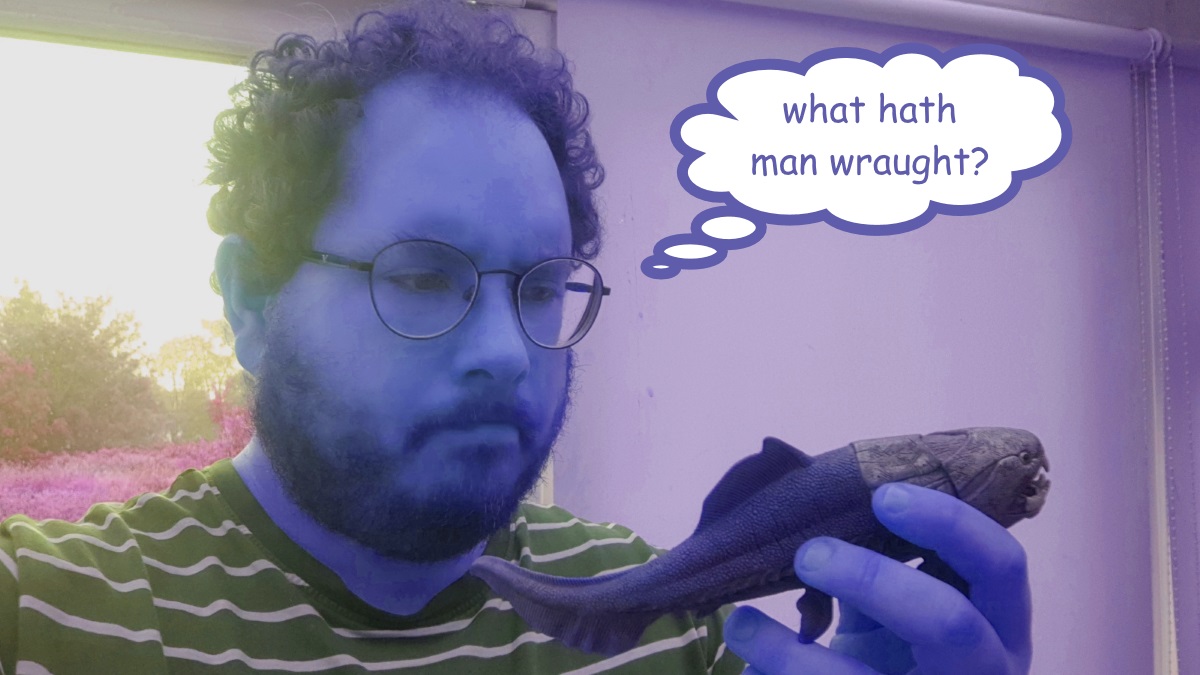 An awkward silence descends, in which Blue Nate acknowledges that the greatest fallacy in our view of the natural world, rooted in the Abrahamic tradition and reinforced by colonialist ideas of manifest destiny, is that nature is a hierarchy, with humans at its apex as some sort of discrete separate class, rather than being part of a grand continuum with no top, no bottom, and no end goal. If humans are animals, he thinks, then even our cultures are expressions of nature, and so it’s natural to want to play a game like Maneater, which does – in all fairness – look like an awful lot of fun.

That stumped you, didn’t it?, leers red Nate, taking a huge chomp from a burger.

In the end, there was only one thing both versions of myself – this cheerer and this jeerer, if you will – could agree on. Maneater’s E3 trailer, in which a breathtakingly burly fisherman plays a catfish like an electric guitar, with his face lifted in Elysian ecstasy, is an absolute belter.

Maneater is Jaws: The Game, and we're Jaws