Last Time on the BoC: The fort’s period of civil disorder came to a bloody conclusion, and a new wave of immigrants bolstered efforts to begin constructing a suite of new living quarters deep underground. Siege defences were also bolstered, with the construction of a new sniper tower.

Summer has come to the Basement of Curiosity, and its herald is an Ettin: a savage, two-headed giant known as Kifino Fecaciade, the Droplets of Adventure.

On sighting the beast, which wades through the Northern jungle as if its treetops were a waist-deep sea, Urist sounds the alarm. The Axes of Fortifying – the new archery squadron headed up the criminal Geb – are marshalled in the newly-erected sniper tower, while the rest of the dwarves huddle underground behind the safety of the fort’s high wooden walls. As such, it’s a bit of a fucking shock to say the least when the Ettin vaults the wall with a guttural chuckle, and crashes down in the fort’s alfalfa plantation, ruining it utterly. 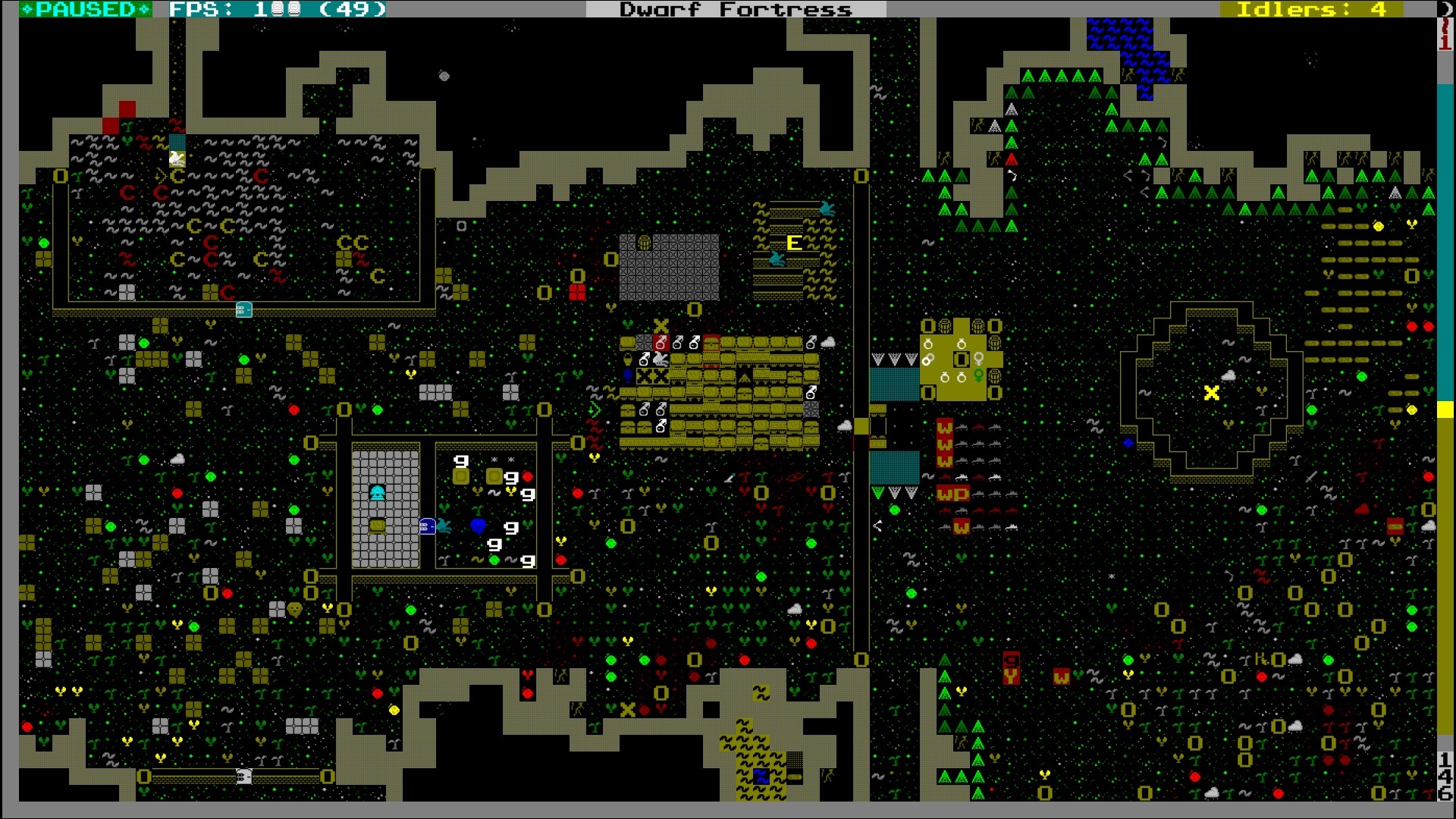 Genuinely didn’t see this coming. It was one of those moments where I thought everything was totally under control, and then the game just laughed at me. I love it.

Booming sadistic laughter, the enormous creature lopes across the valley in three great strides, and jumps down into the fort’s food store. Suddenly, without warning, there is a bloodthirsty giant in the midst of the citizenry.

The chef Ushat, who is working at her stove, doesn’t think twice. Clearly apoplectic that her alfalfa patch has been trampled, she sprints at the beast and begins to bite its foot. This is brave, but utterly senseless. The giant reaches down and crushes her left arm in its fist, before hurling her at the wall with a sickening thud.

Ushat is grievously injured, and the ettin is stooping for the killing blow, when two more dwarves rush to her aid — a child called Mistem (daughter of the glassmaker Dodok), and the mysterious miner Uvash, who only showed up a week or so ago. Mistem is insanely courageous, pummeling the giant to absolutely no effect, and the ettin stops in its tracks for a moment, astonished at the attack. 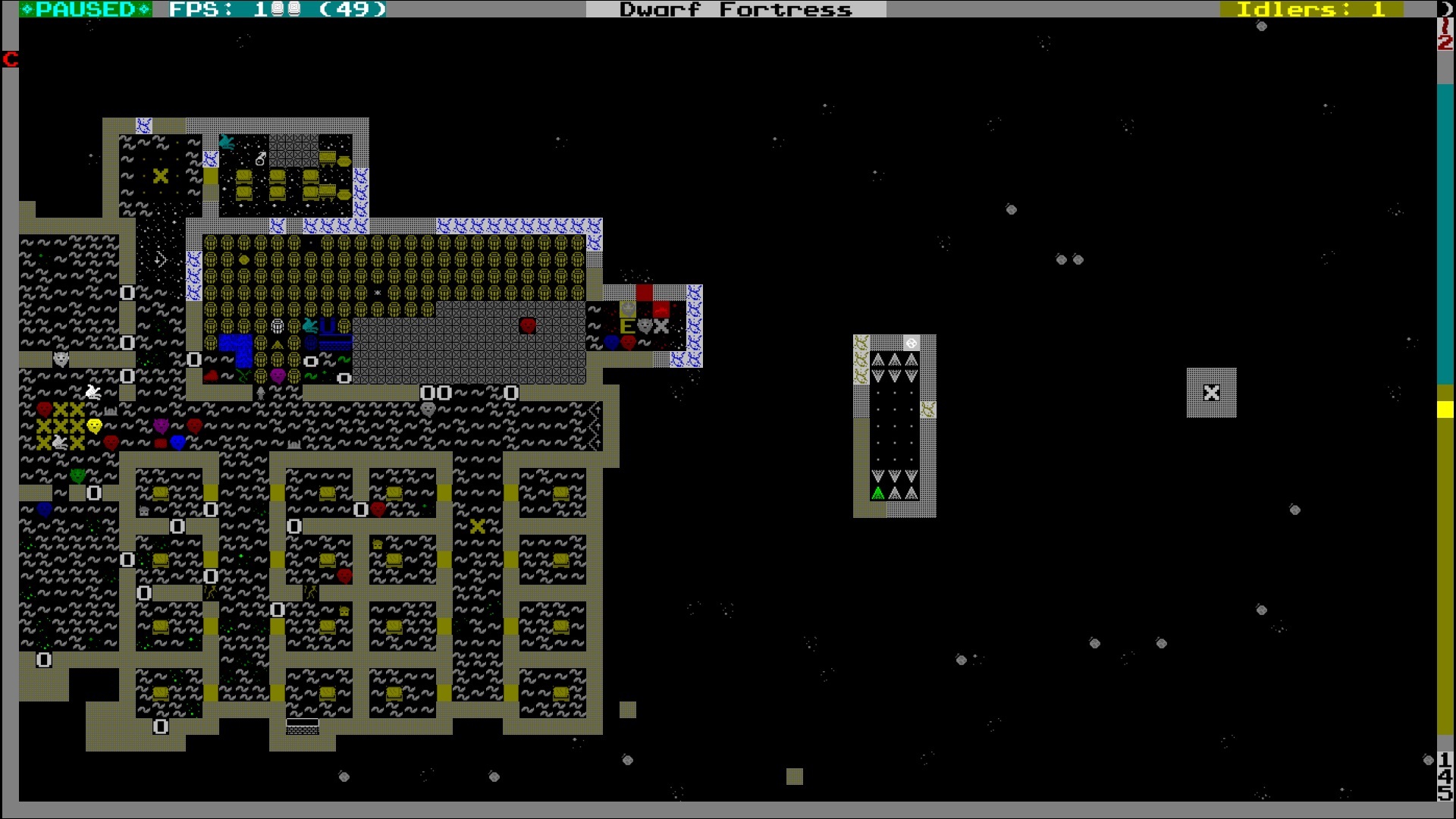 This gives Uvash time to leap up on the monster’s body, which he begins to scale, Shadow-of-the-Colossus-style, using his pickaxe to gain purchase. His strikes infuriate the ettin, which decides to stop buggering around, and grabs Mistem with its right hand, before popping her into one of its mouths like a struggling crisp. With a stomach-churning rip, the monster tears Mistem’s left leg from its socket, like meat from a chicken wing, and tosses the child to the floor to bleed out.

This hideous barbarism raises a shout of rage from the assembled dwarves, and more run in to assault the ettin. Among them is the child Vucar, a six year old brawler who was born without fear, and who now demonstrates that in defence of her pal Mistem, by leaping onto the giant’s body and beginning to bite at its face.

But it’s not just kids attacking. Fresh into the fray is the fellow known as the Goosemaster; a freakishly large dwarf who leads the fort’s gay community, and also looks after its geese. Although he’s only armed with a microcline sceptre, his sheer size means it leaves bruises and welts as he thwacks away like an angry Victorian widow going to town on a carpet.

Still, the only defender drawing blood is Uvash, who has climbed to the ettin’s shoulders now, and is using his pick to desperately weaken the monster’s joints before it can finish off either Ushat or Mistem. As for the casualties themselves, they are in very bad shape indeed – Ushat is unconscious and broken in many places, while Mistem is deathly pale, her blood leaving her body in a gushing fountain.

Once again, Dwarf Fortress delivers an unexpectedly heartbreaking moment. As Mistem lies bleeding, she’s still feebly punching at the Ettin’s foot – and she thinks she is playing. A look into her mind reveals the following thought: “Has the tide turned? I am not scared!” Hang in there, little pal.

Despite Uvash’s pick-strikes, Vucar’s biting, and the Goosemaster’s brutal thumps, the ettin is far from struggling. Most of its body is now damaged, but it has no problem smashing its foot into Ushat’s unconscious body, wrecking half her organs. Another strike like that, and she’ll be dead for sure.

But just then, a figure comes streaking across the room, a blur of beard, rags and scar tissue, like sonic the hedgehog after a decade of vivisection. It is Id, moving with impossible speed despite his injuries, and he slams into the ettin like a cannonball. Before the beast can react, he’s all over it, snapping fingers, tearing ears, and pummeling knees; wrestling this monster one hundred times his size. 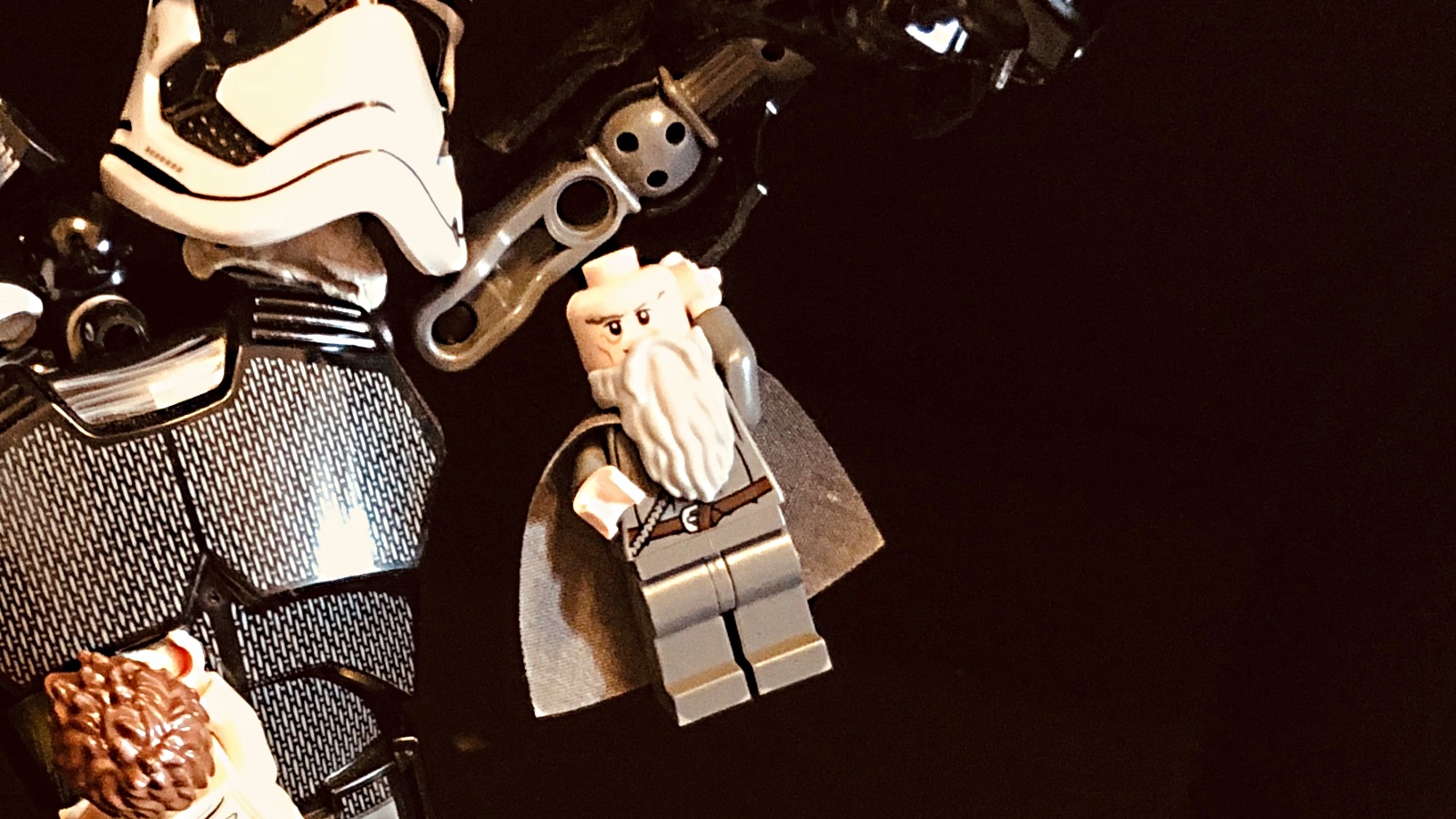 *record scratch noise* Yup, that’s me. Id the Snakebuster. You might be wondering how I got into this situation.

He’s like some sort of demonic presence summoned by the burning of old Wrestlemania VHS tapes, and the Droplets of Adventure is helpless to resist – again and again it lunges at him, and every time it misses. And with every strike now it becomes weaker, as the many punctures inflicted by Uvash’s pick take their toll. Yes, little Mistem, the tide is turning.

The Goosemaster smashes the giant in the chest, and its lung is damaged, winding it. With a savage yawp, the child Vucar tears a lip off in her teeth. Uvash’s pick punctures one of its brains, and it lets loose a moan of anguish that shakes the fortress. Finally, Geb’s marksdwarves arrive from the tower and begin unleashing a hail of steel into the beast, but the job is nearly over: like a bongo player on cheap speed, Id is pummeling the ettin’s exposed heart. 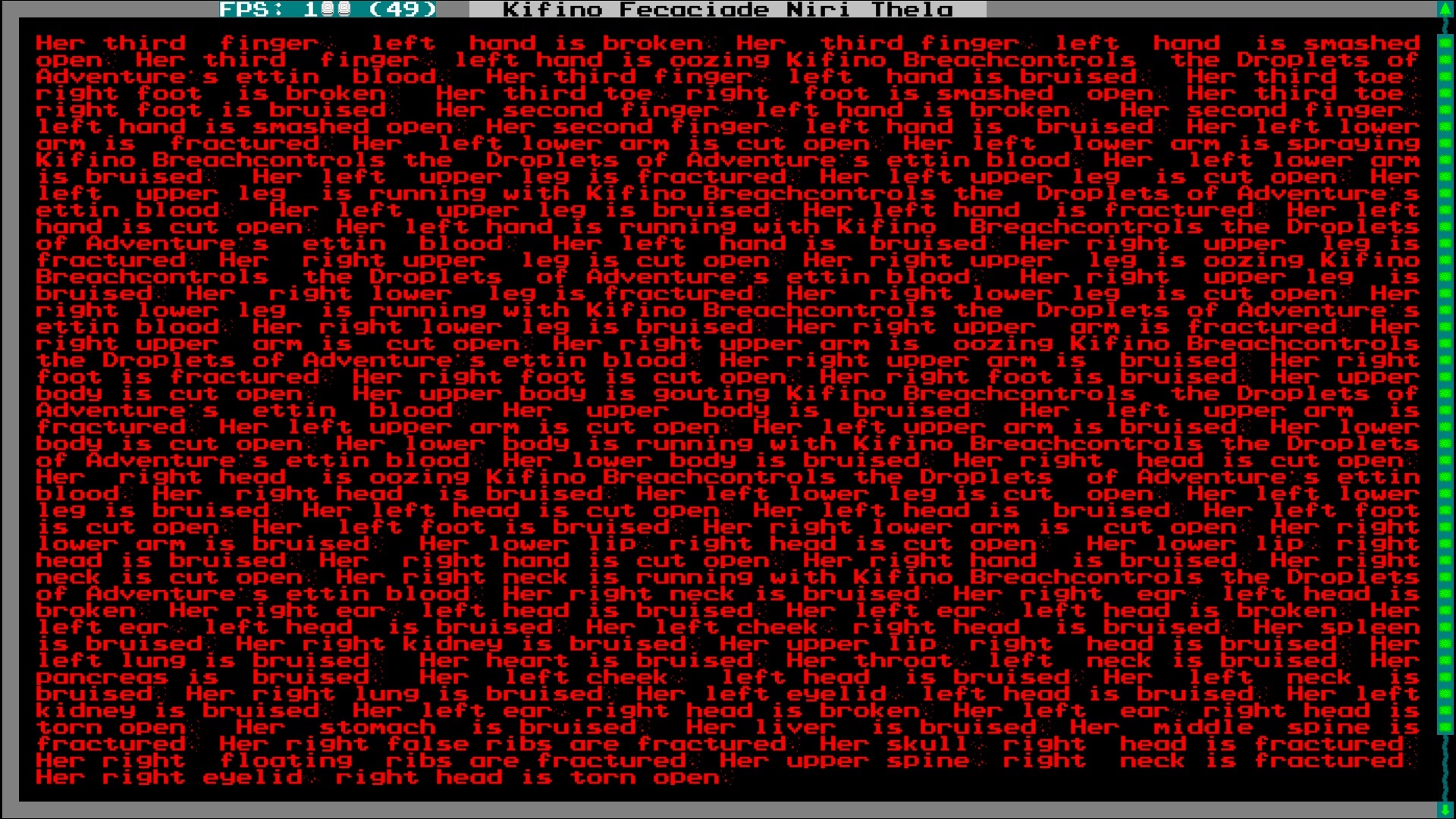 Just look how utterly fucking wrecked the Ettin was at this point. There were two more pages of damage like this. Indeed, so horrifying was its demise, that months later, dwarves were still stopping in their tracks, overcome with trauma at the memory of the Ettin’s grisly death.

In the end, it’s the furnacehand Minkot who claims the monster’s life, grabbing a spear and driving it into its one remaining brain, but everyone knows who the real heroes of this battle were. Sharing a nod over the giant’s corpse, Id, Uvash, Vucar and Goosemaster offer each other muted congratulations. They will forever share a bond from this moment.

What were the other dwarves up to while this pitched battle for the fort’s survival took place? Well, I can’t speak for all of them, but I can speak for Rakust, the fort’s… eccentric lumberjack. He was felling a tree into the fort’s pig pen, crumpling a piglet and severely injuring the beloved boar Mebzuth Syrupdreams. Then, presumably ignoring the frantic cries for him to stop (“what? You want me to chop another tree?”), he did it again, smashing one of Lorbam’s new warthogs into giblets, and knocking himself out in the process. Never change, Rakust. 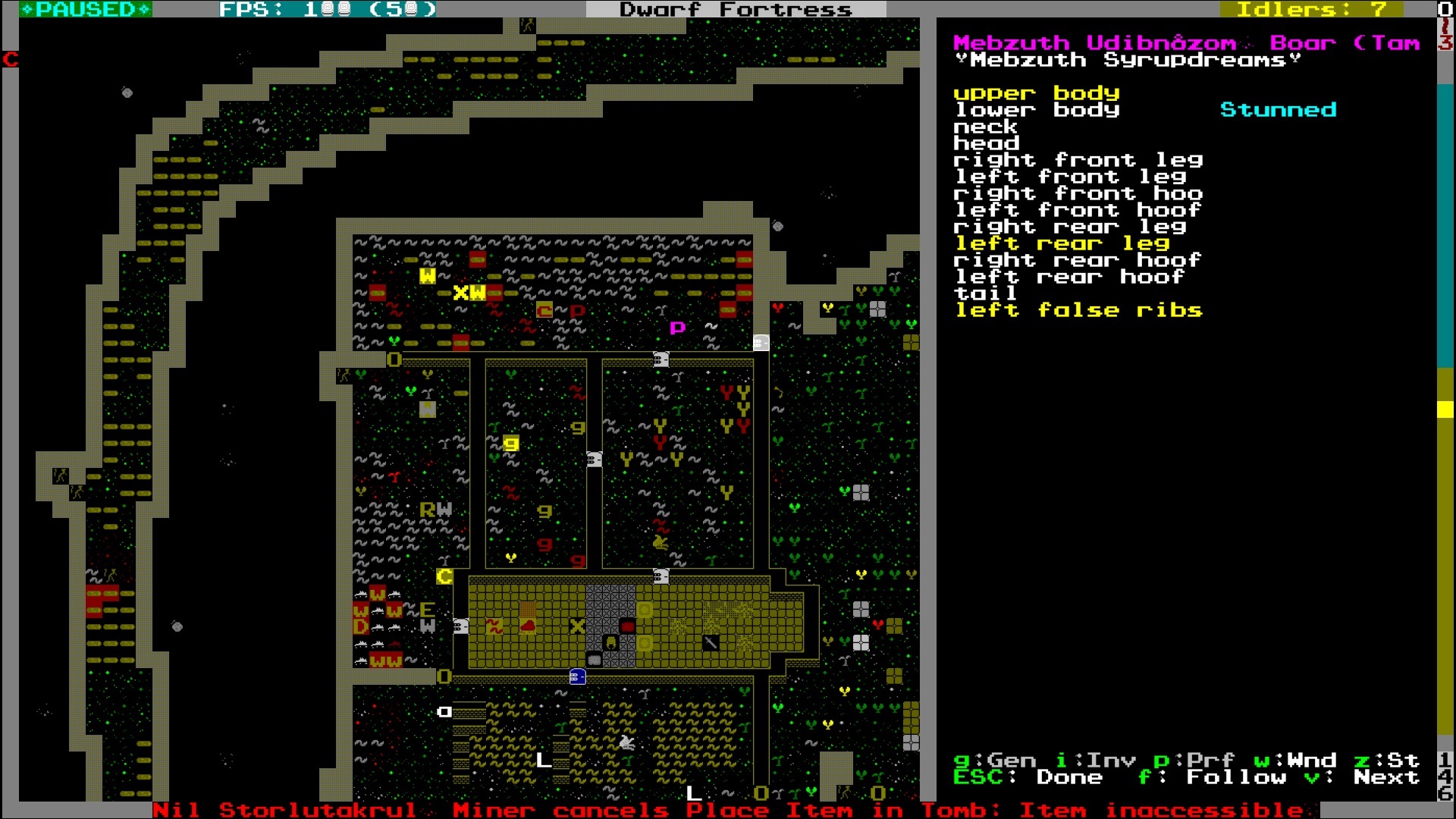 After the Ettin attack, things in the fortress got back to something like normal. After extensive surgery, both Mistem and Ushat were saved, and rejoined the life of the Basement on crutches. The Ettin was dumped on top of the pile of bards in an offshoot of the crypt, and the dwarves continued with their labour to ready the New Fort for inhabitation (there’s been plenty going on on that front, but I want to wait til its finished to give the grand tour).

Somewhat disappointingly, the Dwarven caravan never arrived this autumn, but a hefty goblin siege did, which Urist took as a chance to finally give the new sniper tower its first outing. It was a disaster.

For a start, Angir the monster slayer and his wife Inod refused to run to safety, opting instead to loiter around by a pond a few yards from the fortress gates. They went down like chumps, but at least they took a couple of beak dogs with them.

Geb’s marksdwarves did get in some good shots, whittling down the goblin force by a quarter of its numbers, but then they made the insane decision to charge the goblins when they ran out of ammo, rather than reloading. Using the stairs that had been used to construct their tower, they ran up onto its roof and then leapt off its edge into the goblin horde, with Geb himself breaking a leg on hitting the ground. That roof will need sealing off before the tower is used again.

Geb’s squad were massacred, but at least they inflicted enough casualties to drive the goblins away, and they were so new that nobody had really gotten attached to them anyway. And besides, Geb was a criminal. Fools though they were, they – and Angir and Inod besides – were given the customary hero’s burial in the fort’s crypt. 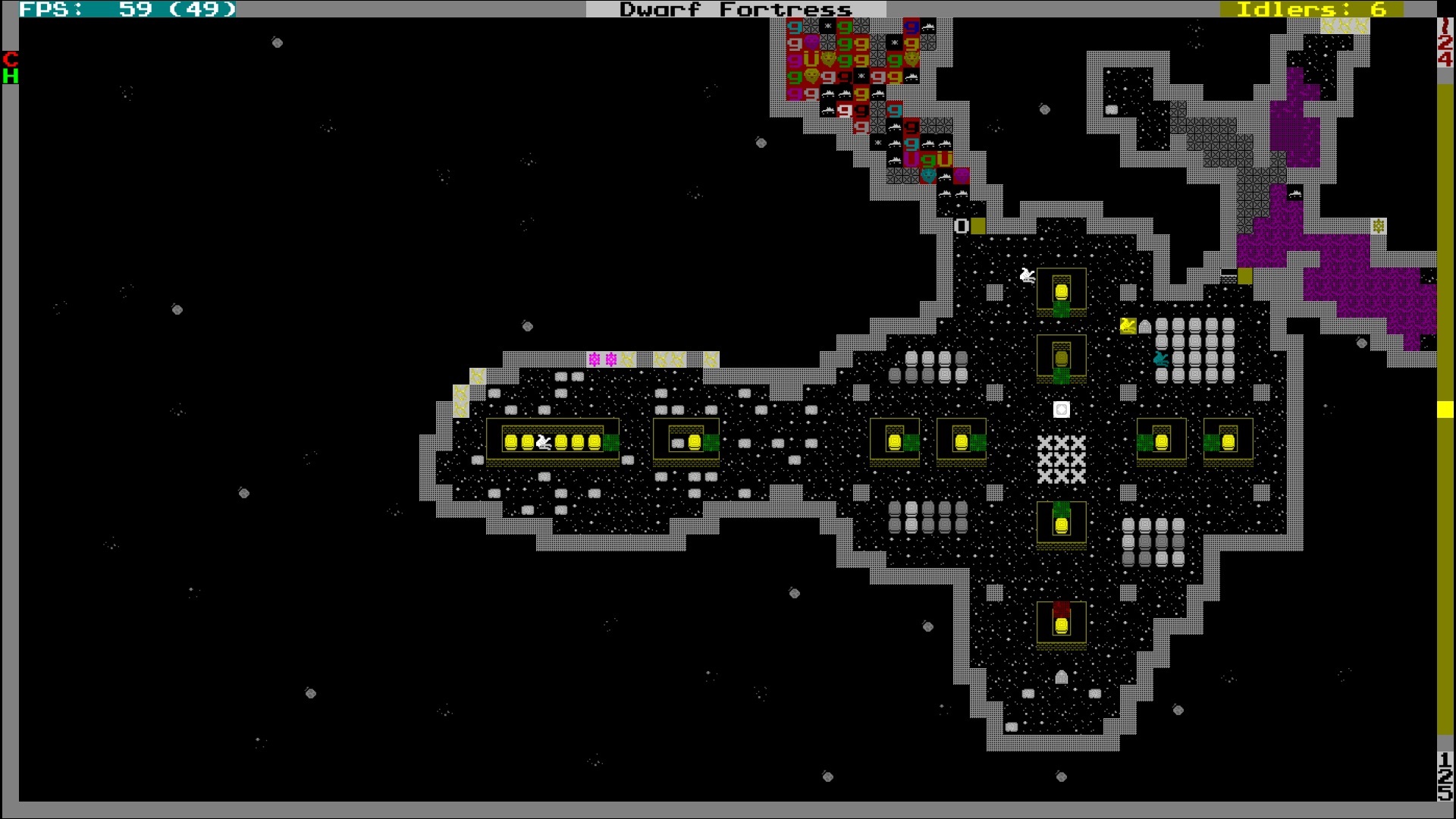 It was only months later that I realised Inod’s coffin (next to Angir’s in the twin mausoleum on the right) was empty – turns out she survived the whole affair, and recovered from her wounds?? Oh well, her tomb is ready.

Next time on the BoC: the dwarves move into the New Fort, and the expansion into the underworld is planned. 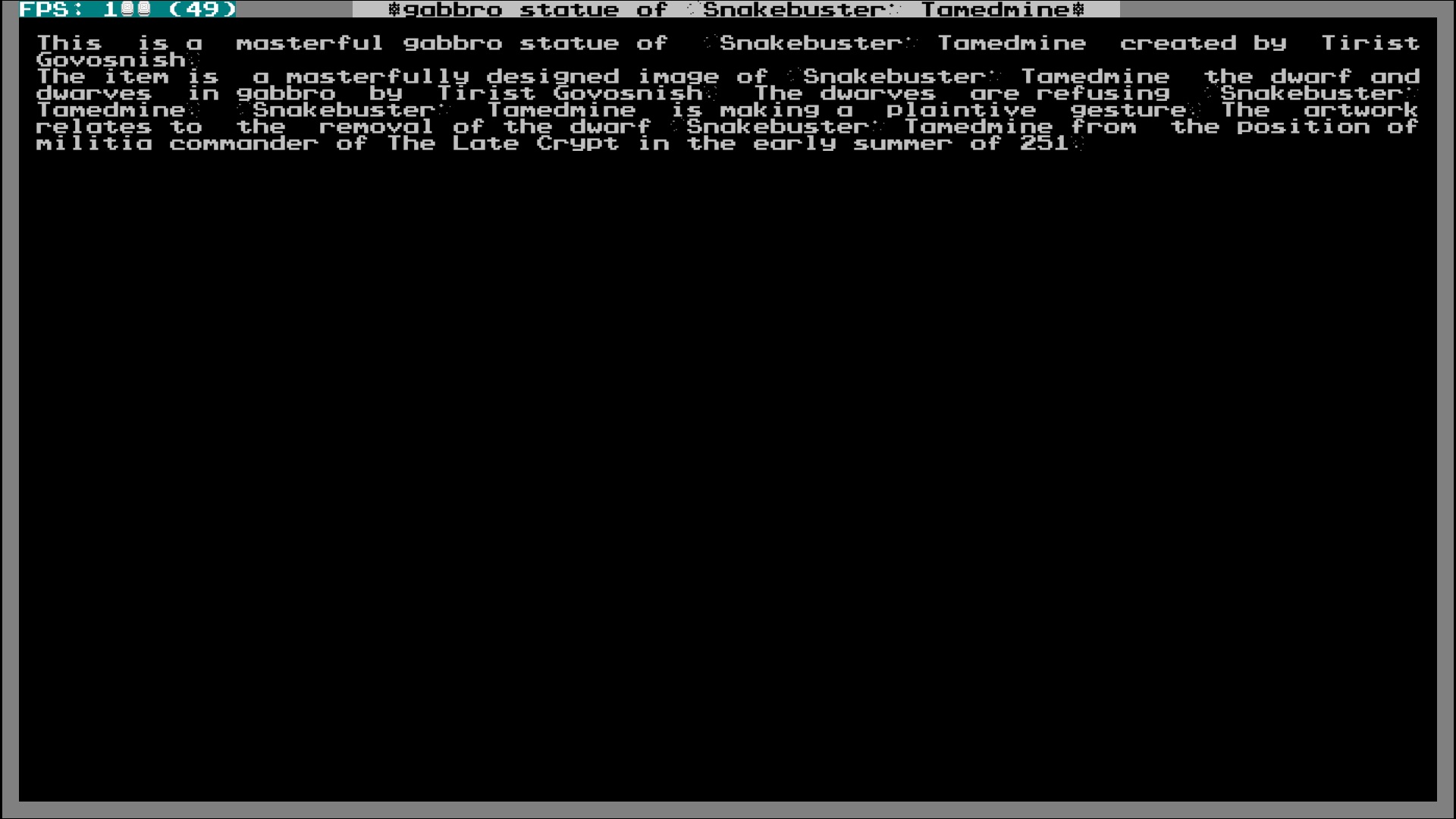