When it comes to finding the world’s best gaming keyboard, the age-old wisdom of the internet hivemind will often say, ‘Mechanical or bust, mate.’ Heeding such advice, however, would be to ignore the many great (and not to mention considerably cheaper) membrane gaming keyboards out there at the moment, such as our current best membrane champ, the Razer Cynosa Chroma, and today’s test subject, the HyperX Alloy Core RGB.

Priced at just £50 / $50, HyperX’s new entry-level gaming keyboard is a brilliant bit of kit for the money, and at time of writing it’s also a smidge cheaper than the Cynosa Chroma in the UK, and just $5 more in the US. Does it have what it takes to knock Razer off its best gaming keyboard perch, though? Here’s wot I think.

From the outset, the Alloy Core makes a strong first impression. Despite only having a plastic frame, its matt finish looks a lot smarter than the shinier, cheaper-looking finish Razer have used on their Cynosa Chroma, and I’m also a fan of the subtle ridge pattern on the Alloy Core’s lower edge – if only because once again it looks just that little bit more visually appealing than the considerably plainer chassis of the Cynosa Chroma. I’m even quite partial to the small, thin RGB light bar running across the top of the keyboard, too. Sure, it’s probably a bit more shouty on the whole ‘I’m a gaming keyboard!’ front than its Razer rival, but I do like how it ties the whole thing together.

The Alloy Core’s soft touch key caps also give you a lot more purchase than those of the Cynosa Chroma, which, for me at least, meant I wasn’t so worried about my fingers sliding off the edge of them when I was moving rapidly between keys. It also made for a more assured typing experience more generally as well. I was able to get up to my normal typing speed in no time at all on the Alloy Core, and I was always sure I’d pressed each key correctly no matter how fast I was moving between them. 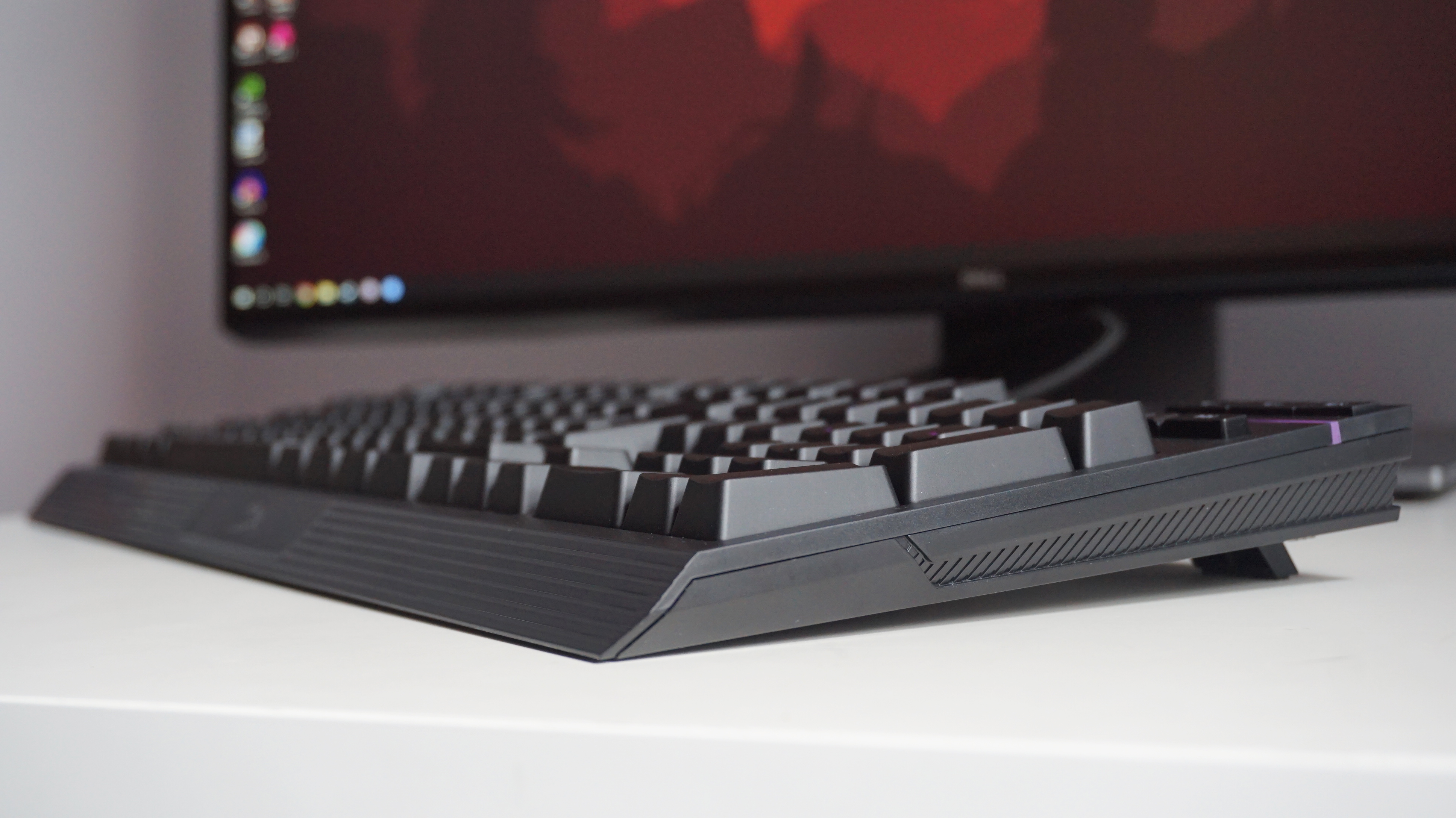 The Alloy Core is spill-resistant, too – just like the Cynosa Chroma. Admittedly, Razer have never specified either on their website or in the Cynosa Chroma’s instruction book just to what extent it’s actually spill-resistant, but according to HyperX, the Alloy Core can withstand up to 120ml of ‘liquid’ being chucked over it (even if they, too, don’t actually say at any point what kind of liquid they actually tested it with). That makes it a little hard to compare the two, admittedly, but in the case of the Alloy Core, 120ml is a pretty decent amount – definitely a considerable dollop of spillage, and more than enough to make you wince if an equivalent amount fell on a keyboard with no spill resistance whatsoever.

So to put HyperX’s claim to the test, I measured out 120ml of water and gave the Alloy Core a small bath. And lo and behold, every key was absolutely fine and dandy when I plugged it back in again – as was every key on the Cynosa Chroma when I gave that one a splash with 120ml of water as well.

Water resistance aside, another bonus of using the Alloy Core for playing games and general desktop typing is that it’s so much easier on my old ears! I really do not miss the CLACK CLACK CLACK of the previous mechanical keyboard I had on my desk, and I can actually use this one within earshot of another human being and hold a normal conversation with them without having to shout in their face. 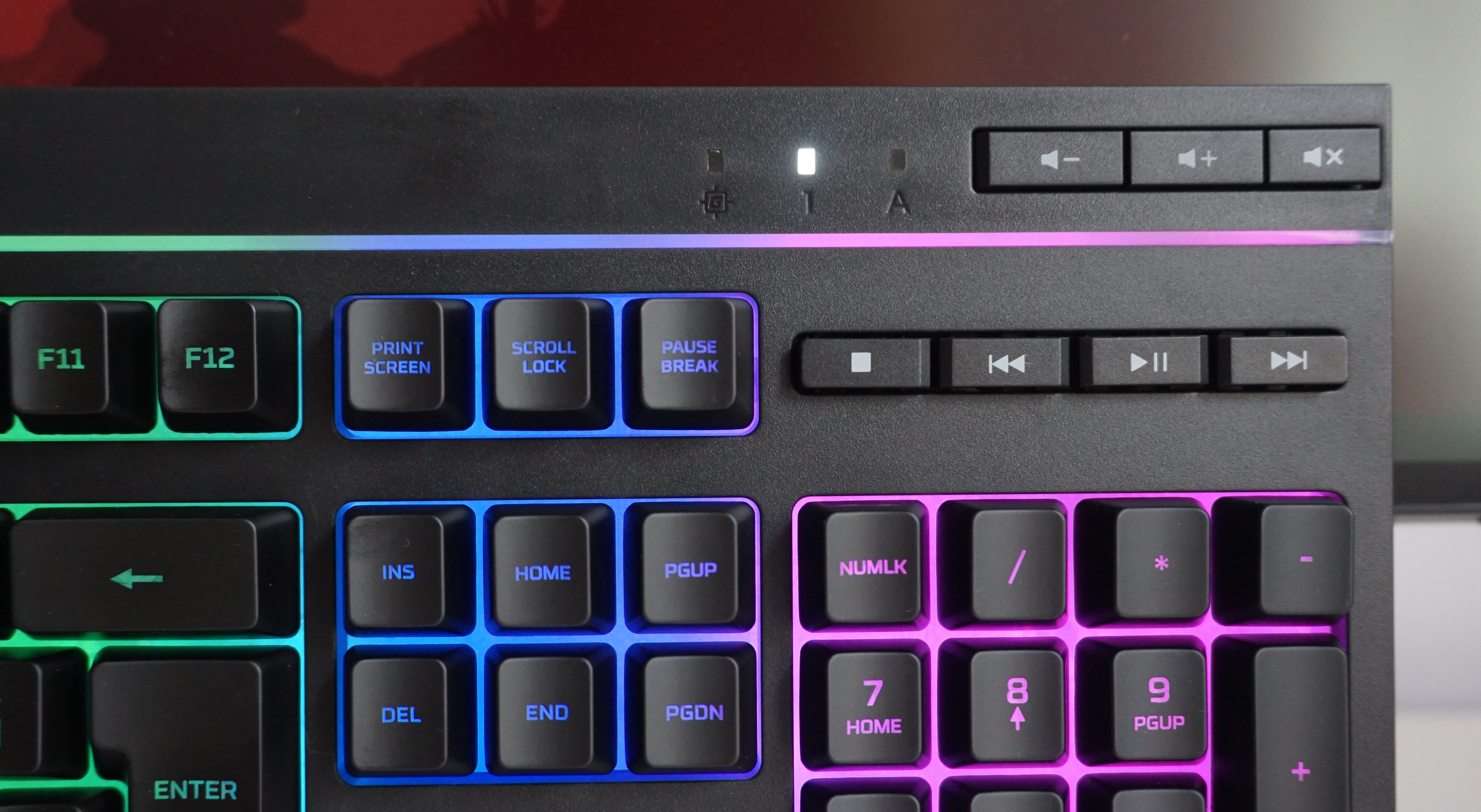 That said, Razer’s so-called ‘soft-cushioned’ keys on the Cynosa Chroma do feel a tad quicker than those on the Alloy Core, and are probably a touch closer to capturing the kind of speed you might find on an entry-level hybrid gaming keyboard. Comparing them side by side, the Alloy Core is certainly the spongier of the two, but it’s still a lot more responsive and precise than either of my old Razer Arctosa and Roccat Isku membrane keyboards I’ve got stashed in the cupboard. Indeed, I didn’t have any issues at all using the Alloy Core to play fast-paced games such as Doom or Monster Hunter: World, and I’d be perfectly happy using this as my main gaming keyboard over a more expensive mechanical one.

One thing the Alloy Core does do better than the Cynosa Chroma, though, is give you lots of dedicated media keys. These are all mapped to the Fn keys on the Cynosa, but here you get individual buttons for volume, mute, play, skip and stop, which is infinitely more convenient (not to mention easier on the eyes) than having to peer along a row of small, secondary Fn symbols and pressing down two keys at once just to turn the sound down.

Where the Alloy Core falls back down, however, is its RGB lighting controls. Don’t get me wrong – there are still plenty of options available here, including three different levels of brightness and five different colour profiles. I just wish I could play about with all of them using HyperX’s NGenuity software instead of breaking out the instruction manual every time to work out which mode is compatible with which customisation effect and which buttons I need to press in order to activate them all. 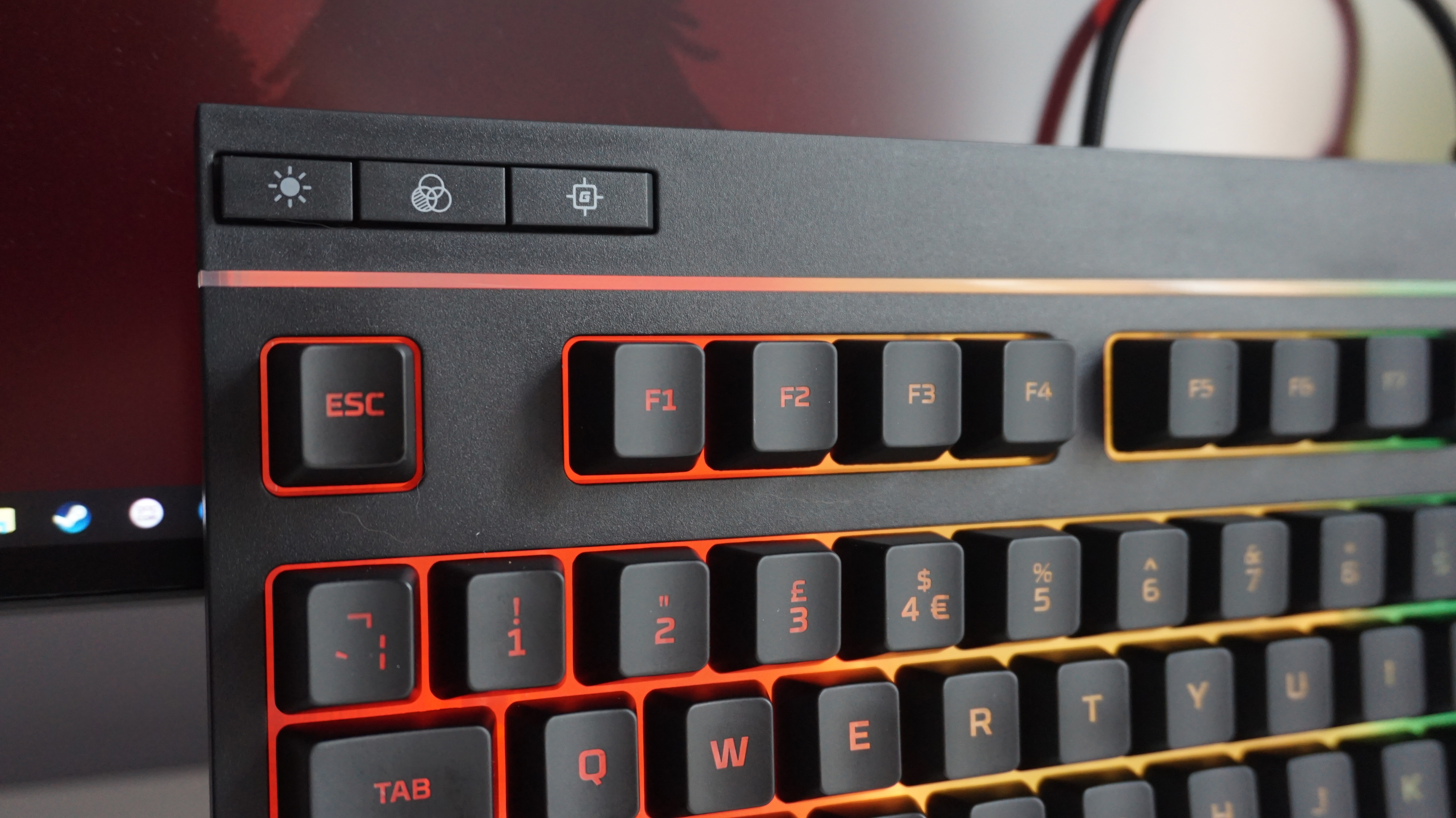 You can easily disable the Windows key by hitting the Alloy Core’s Gaming key, but trying to customise its RGB lighting is quite a hassle.

For the Alloy Core isn’t compatible with NGenuity at the moment, so you’ll have to make sense of the mildly confusing Quick Start Guide, cross-referencing its Effect Customisation table with its two Function Key diagrams, if you want anything other than its default static 5-Zone colour mode (shown below). It’s hardly the biggest gripe in the world, all told, but those who like to customise their RGB lighting right down to the nth degree will likely find the Alloy Core a bit of a chore in this department.

A lack of NGenuity support also means you can’t assign or record any of your own macro commands on the Alloy Core (like you can on the Cynosa Chroma), nor can you reassign different key functions. Instead, this is very much a keyboard that’s intended to be used straight out of the box and little else. That’s fine if all you want is a straightforward gaming keyboard, but less so if you want one that gives you that extra degree of flexibility.

Personally, I’m fine with it being the former, but when the Cynosa Chroma offers the latter for pretty much exactly the same price as the Alloy Core (£58 / $45), even I’ve got to admit that the Razer’s got the edge here in terms of overall value for money. There’s still plenty to admire about the Alloy Core – indeed, I much prefer HyperX’s design, braided cable, key cap feel and dedicated media keys – but as a pure ‘gaming’ keyboard, the Cynosa Chroma still comes out on top. Just.