One of the big attractions of choosing a new AMD Ryzen 3000 build at the moment is the fact it supports the new, super fast PCIe 4.0 standard. You’ll need to pair your new 3rd Gen Ryzen CPU with one of AMD’s equally new (not to mention expensive) X570 motherboards to make use of it, of course, but the potential benefits are massive – particularly when it comes to SSDs. Previously, PCIe 3.0 motherboards were limited to speeds of 16GB/s in one direction, but PCIe 4.0 doubles that bandwidth to 32GB/s. That’s huge, and could a massive game changer for cutting down on loading times and transferring extra large files around your PC.

PCIe 4.0 SSDs are still pretty thin on the ground at the moment, but the first one to make it out of the gate is Gigabyte’s thrillingly named Aorus NVMe Gen4 SSD, which was sent to me along with my initial Ryzen 7 3700X testing pack. Available in 1TB and 2TB capacities, this hunk of copper delivers some seriously fast read and write speeds, but will also burn quite a large hole in your wallet at the same time. Brace yourselves, cause here’s wot I think.

Priced at a whopping £290 / $260 for the 1TB version, and an eye-watering £480 / $460 for the top 2TB model, the Aorus NVMe Gen 4 SSD is really only for serious power users / over-eager early adopters at the moment, because let’s face it, no one needs to spend that much on an SSD right now, and prices will almost certainly come down once more of them start arriving on shop shelves. This is not the best SSD out there – or at least not when it comes to overall value for money.

Still, as an early indicator of what PCIe 4.0 offers, though, it’s all pretty promising stuff, particularly its write speeds and overall endurance. For example, Gigabyte claim that the Aorus NVMe Gen 4 can offer sequential read and write speeds of up to 5000MB/s and 4400MB/s respectively. That’s significantly faster than the Samsung 970 Evo Plus‘ claimed 3500MB/s read and 2100MB/s write speeds, and way, way quicker than the kind of 500-550MB/s speeds you get on a normal 2.5in SATA SSD, too. 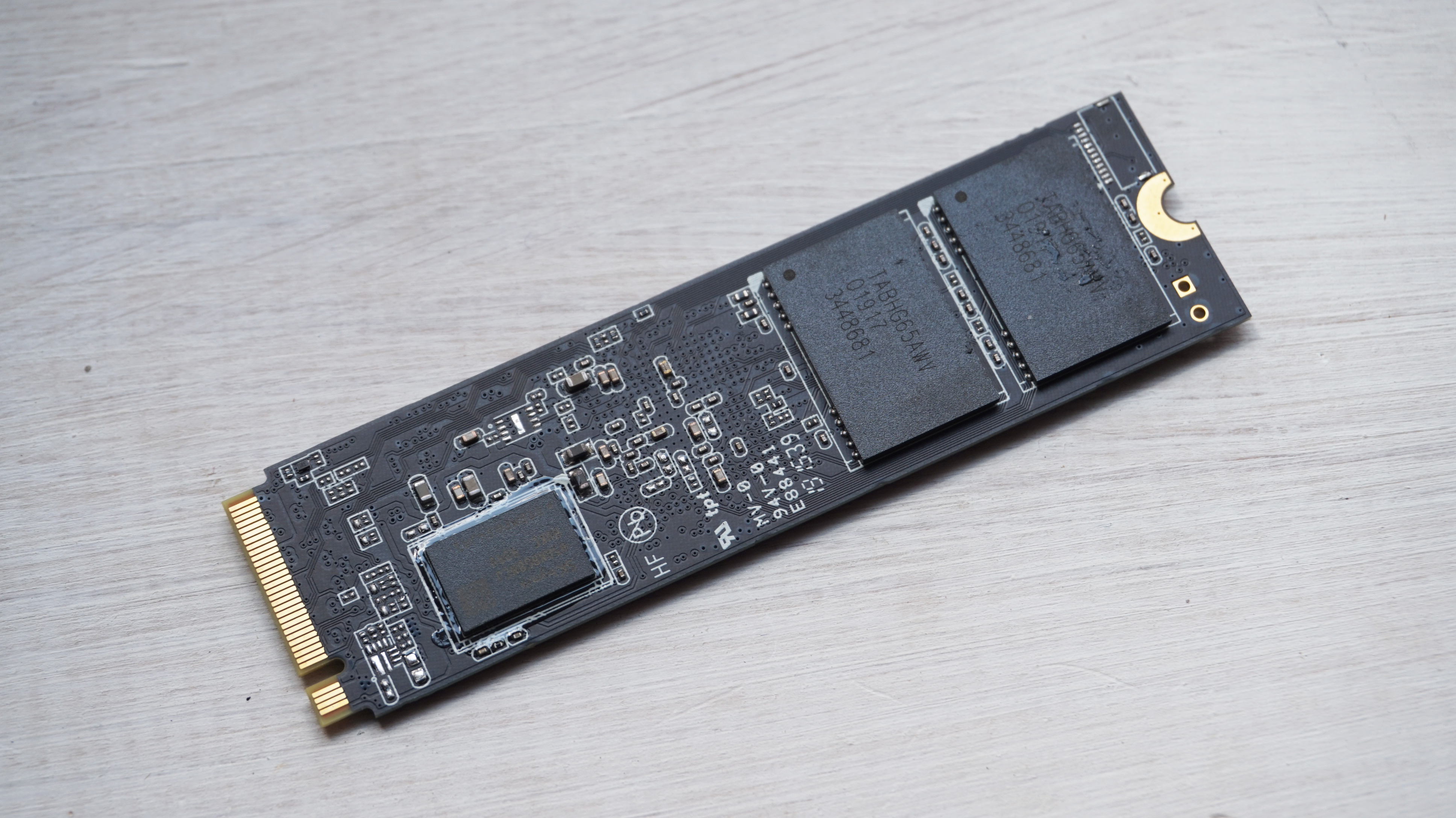 Without its chunky copper heatsink, the Aorus NVMe Gen 4 looks like your typical M.2 SSD

What’s more, Gigabyte have given it a massive endurance rating of 3600 TBW (terabytes written), which is again quite a step up from Samsung’s 1200 TBW on the 970 Evo Plus. It still only comes with a five-year warranty, mind, but if you’re regularly dealing with ginormous levels of data like that, then that 3600 TBW endurance rating is sure to come in handy.

I tested the Aorus NVMe Gen 4 both with and without its bundled copper heatsink on Gigabyte’s X570 Aorus Master motherboard, just to see if there was any benefit to be gained from keeping it nice and cool. There wasn’t, or at least not one that made any real, tangible difference to its overall performance, but given how much data it can churn through, I’d still recommend bunging it inside its heatsink anyway (provided your motherboard has enough room for it, as not all of them do), as it will no doubt last that bit longer over years and years of long-term use than it would in the nude.

Still, I do wonder how Gigabyte actually obtained their ludicrous sequential speeds, as when I ran the Aorus NVMe Gen 4 through AS SSD’s sequential read and write test, I only saw speeds of 2384MB/s read and 3908MB/s write – and that was with its heatsink on, too. Admittedly, Gigabyte do say on their website that their speeds are “based on internal testing” and that “actual performance may vary”, but when my read speed result was only just a teensy bit faster than the Samsung 970 Pro (by about 100MB/s or so), it doesn’t exactly scream that this is the second coming of SSD speeds we’ve all been waiting for.

That write speed, on the other hand, is actually pretty impressive. The best I’ve seen from other NVMe SSDs, for example, is Samsung’s 970 Evo Plus with 2783MB/s. That puts the Aorus more than a whole gigabyte in front of the Samsung, which is a very tasty margin indeed from a raw numbers point of view. 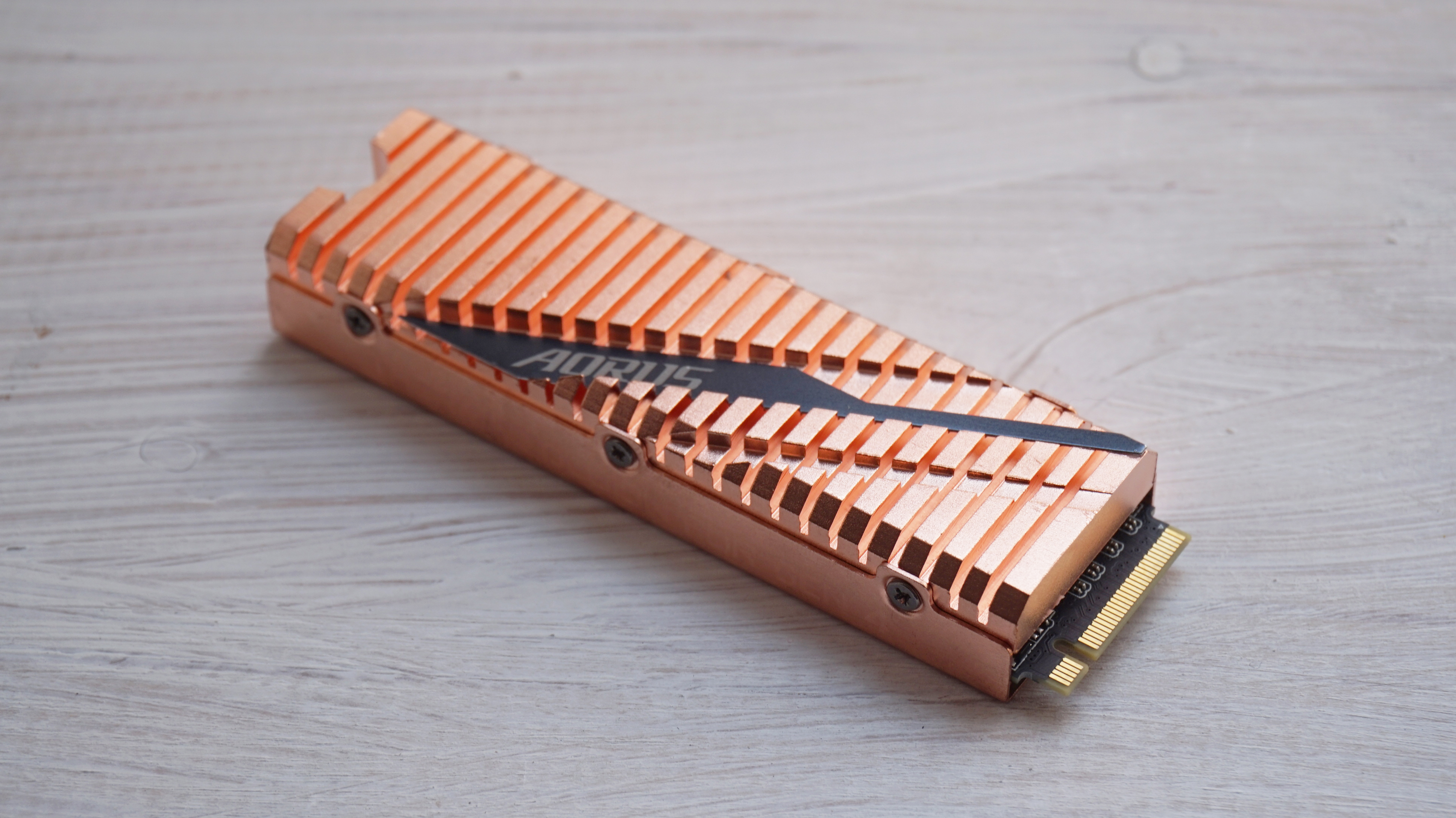 It’s a pretty chunky little thing with the heatsink attached, standing 11.4mm high, so you’ll need to make sure your motherboard has enough clearance before you try and connect it.

Of course, sequential speeds are never the best indicator of an SSD’s real world performance, as it’s very rare that data gets read or written in nice, adjacent chunks. Instead, they’re usually chucked all over the shop, which makes random read and write speed tests much more accurate when it comes to the kind of everyday speeds you’re likely to see in practice.

Here, the Aorus impressed the other way around, showing larger gains in the reading department than its writing prowess. With the heatsink attached once again, I saw a peak random read speed of 65MB/s and a write speed of 152MB/s. The former is once again the best I’ve seen in this particular test, coming in around 10MB/s faster than the 970 Evo Plus and roughly 7MB/s nippier than the 970 Pro. Its random write speed, however, is pretty mediocre. Indeed, the 970 Pro beats it by a good 15MB/s, as does WD’s Black SN750 when you enable its special gaming mode.

It could be, of course, that a mere 1GB random test is too feeble to show what the Aorus NVMe Gen 4 is really made of, so I also put it through CrystalDiskMark’s more intensive, server-grade 8-queue-8-thread random test to see how it handles multiple workloads. Much like its performance elsewhere, however, there’s good news and bad news. The good news is that I saw write speeds of a whopping 2506MB/s, which is a good 500MB/s faster than the 970 Pro and 1GB/s quicker than a lot of other NVMe SSDs I’ve tested including the WD Black SN750 and the Samsung 970 Evo Plus. 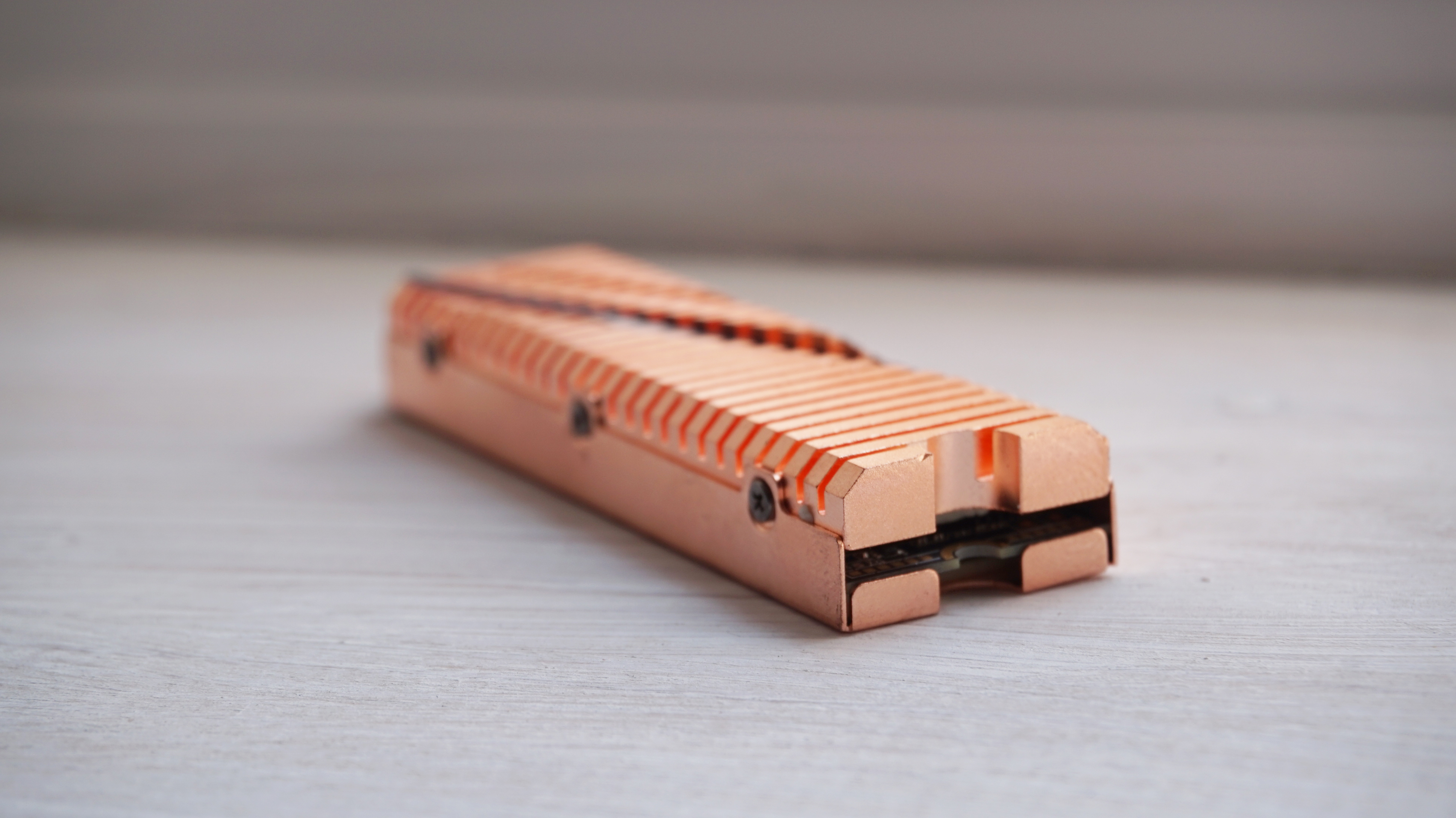 As a result, it still feels like early days for PCIe 4.0 storage devices, as there are still plenty of areas where the Aorus struggles to make much of an impact – at least with my particular set of testing tools, anyway. Some results are indeed impressive, but I’m still not entirely convinced that the Aorus really delivers enough of speed boost where it counts (that is, its random speeds) to really make it worth buying over an existing PCIe 3.0 NVMe SSD right this very second. Throw in the cost of an X570 motherboard and a Ryzen 3000 CPU as well and it’s all looking like a very expensive endeavour for not a massive amount of benefit. This may well change over time, of course, but right now, I’d hold off buying a PCIe 4.0 SSD until everything becomes a bit cheaper and a lot more mainstream.