I’ve tried for about twenty minutes to find an opening sentence that doesn’t sound contrivedly promotional, but sod it: Cantata is one of the most interesting upcoming tactics games around. Taken individually, none of its elements are revolutionary. It’s a case of “Advance Wars, but…”, where the wheel of modifiers has been spun and landed on “bright colours”, “supply lines” and “high brow science fiction”. But to me at least, that’s a hell of a cocktail.

It’s certainly not unusual for small-studio games to go big on homage, but speaking to developers Kyle Kukshtel and Roy Graham of Afterschool Studio, I’m struck by how much they’ve worked to avoid cliche in building on their influences. Indeed, the whole project began as a reaction to overused tropes in turn-based strategy.

“The game started out as a response to a discussion on [strategy game podcast] Three Moves Ahead,” explains Kukshtel, “looking at some of the strengths and limitations of space games with commanding officers, and things like that.” He says he wanted to make a wargame with familiar elements at its core, but focused on logistics, with expansion driven by the physical needs of a supply network. “You’re physically drawing a tech tree across the map,” he summarises, “and it’s vulnerable to fire.” 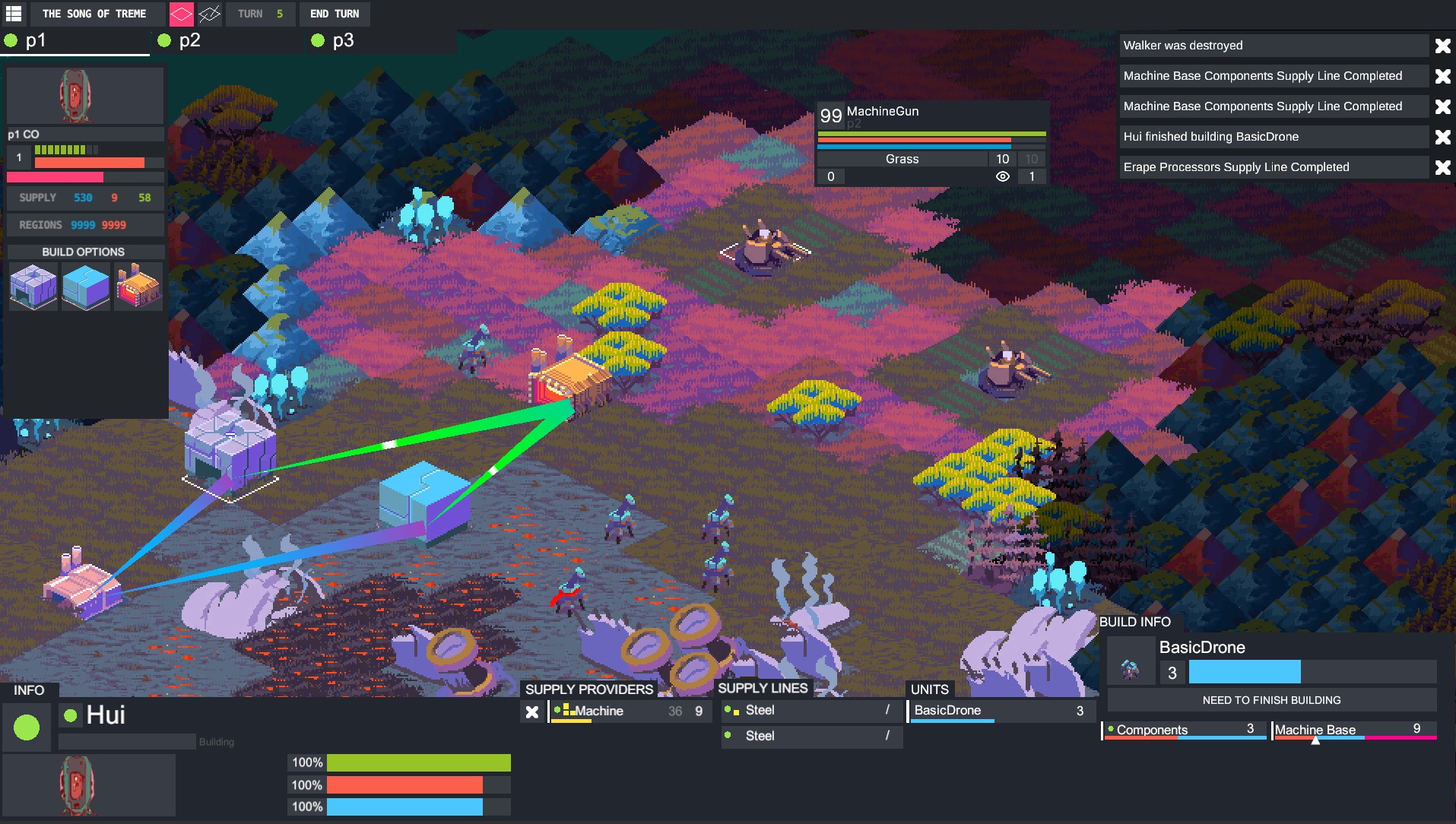 Those supply lines in action

In practice, this means expanding in a way that reminds me partly of an extremely abstracted Factorio, and partly of the production chains central to games like the Anno series: production buildings are built in locations that can support them, and then chained together with intangible links (no conveyor belts or roads here), in order to feed into unit producers.

For quite a while, this design was an anchor without a ship – there was no story or aesthetic to go with it, besides a moodboard of what Kukshtel calls “otaku gangsta cyberpunk stuff”. Without further inspiration, Cantata could have ended up as yet another droplet in the current hurricane of games forcing reviewers to come up with more ways to say “lots of neon lights”.

But then Kukshtel attended a GDC presentation by the makers of Beglitched, a game which joyfully trampled the conventions of “hacker” aesthetics beneath its big, pastel-pink boots, and decided there weren’t enough wargames with such an approach to colour. Soon afterwards, he came across pixel artist CobraLad (not to be confused with the character Cobra Lad from the TV series Snake School), and knew he’d found Cantata’s look. 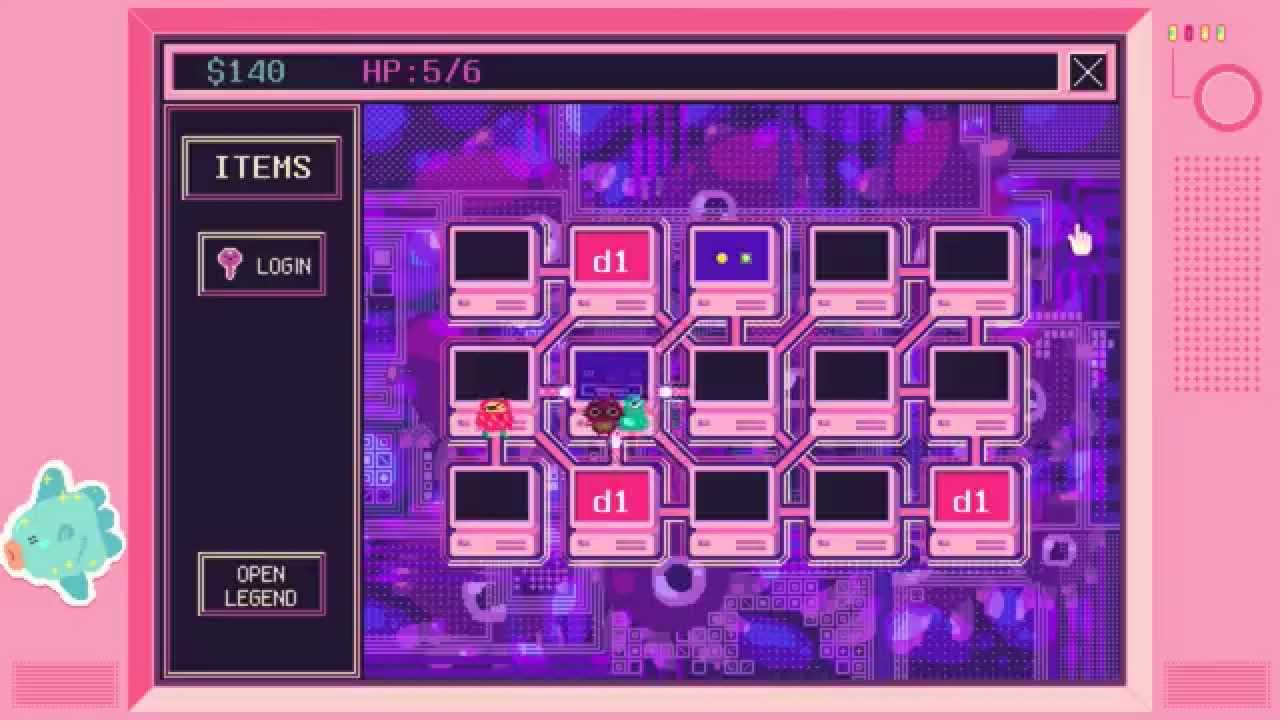 Beglitched and its marvellous colour palette

It’s a good look: like Into the Breach with the saturation turned way up, with landscapes that clearly convey scrub, rainforest, water and rock while not being the colours of any of those things. In short, it looks alien – which is appropriate, given the game’s story.

This final piece of the puzzle fell into place when Kukshtel spoke with Graham, a writer he’d worked with at Killscreen. Immediately, the cyberpunk set dressing fell away, to be replaced by somewhat abstract, understated science fiction (henceforth SF). “Just as Kyle wanted to pay homage to classic tactical games with the mechanics,” says Graham, “so did I want to pay homage with the narrative. I wanted to do the classic aliens/robots/humans thing, while avoiding the inevitable StarCraft trinity”.

Silhouettes of Cantata’s planned roster of COs. I reckon I can figure out which ones are the robots.

Indeed, I guess that Graham is about to namecheck Ann Leckie’s Radch books seconds before he does, and Jeff VanderMeer comes next. Being a bit cheeky, I guess that he also really enjoyed Embassytown by China Mieville, and it turns out I’m right. Good. It’s exciting to see games draw from this particular wave of genre writing, rather than returning to the usual, time-honoured wells.

To allow myself a quick digression: the movement I’m referring to is what’s often referred to as “literary” SF. I absolutely love a lot of these books but, from my own POV as an author who wants to champion the idea of intelligent pulp, I’m always wary of attempts to ‘elevate’ science fiction, as there shouldn’t be a perception that it needs elevating. It rankles me in the same way as the use of the term ‘speculative fiction’ to market genre fiction to snobs. Anyway, that’s all a big BTW – Roy Graham has great taste, and I’m glad to see these books influencing more games.

I have to admit, when I saw my first fragments of Cantata earlier this year, it was the flavour text, and the commanding officer designs, that drew me in. They reminded me a bit of Brandon Graham’s Prophet, potentially the best SF comic of the last decade, and I’m really keen to see more of the game’s unit and faction designs. It definitely makes a change from zerg clones. 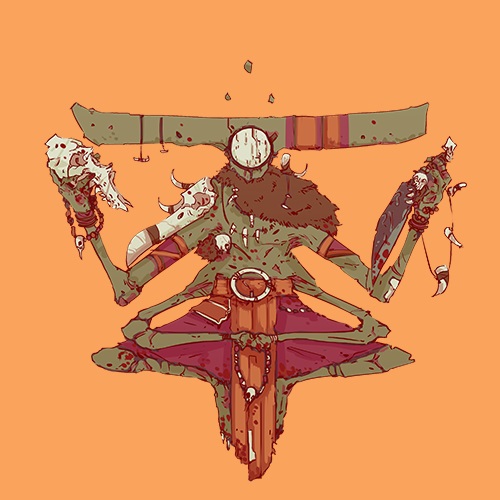 This is He Carves The Dream, one of the alien COs in Cantata. He’s a mystic who has returned from the grave, and I think he’s got a totally sick head. Cantata’s character art (which is all as cool as this) is the work of Gareth Davies.

Cantata’s alpha build (currently a demo mission and a scenario editor) has been distributed through the game’s discord, but an honest to goodness Steam store page launches today. “If we can get a publisher,” says Kukshtel, “we’re hoping to enter proper early access at the start of 2020, and release in full during the fall.”

The game has a hell of a long way to go yet (what’s playable currently is sparse even for a demo) and it remains to be seen whether either its story or its ruleset can live up to their respective influences. If they do, however, I’ll look forward to writing a lot more about Cantata in future.