Nvidia’s RTX 2080 Super card is arguably the best graphics card you can buy for 4K at the moment (or at least it is for those who don’t have over a grand to spend on the crazy expensive RTX 2080 Ti). But which of the many dozens of RTX 2080 Super cards is it actually worth buying? Is it better to stick with Nvidia’s £669 / $699 Founders Edition, for example, or should you spend a bit more and get an overclocked card like Zotac’s AMP Extreme edition?

Priced at £760 in the UK (US pricing TBC), the Zotac RTX 2080 Super AMP Extreme card is almost another hundred quid on top of Nvidia’s version, but it’s also one of the fastest types of this particular card you can buy right now. It’s got a higher boost clock speed than MSI’s similarly priced Super X Trio card, for example, and it’s also got the edge on many of EVGA’s RTX 2080 Super cards, too. But how much more performance are you actually getting for your money? I’ve made some lovely bar charts to help us find out.

Before we dive into each card’s performance, let’s take a quick look at their respective specs. As you’ve probably already noticed, Zotac’s AMP Extreme card is quite a bit larger than Nvidia’s Founders Edition (FE), and it comes with three fans instead of two. As a result, you’ll need to make sure your case has enough space to fit it before you get one – although provided you’re able to remove some of your case’s extra hard drive bays, you should probably still be able to fit it into a mid-tower case without too much hassle.

You’ll also notice that the AMP Extreme requires two 8-pin power connectors rather than an 8 / 6-pin combo like Nvidia’s FE card. You’ve probably already got the necessary cable coming out of your power supply anyway (a lot of 6-pin connectors also have an extra two-pin adaptor on them anyway), but just in case you don’t, Zotac have included two dual 6 to 8-pin adaptors in the box. 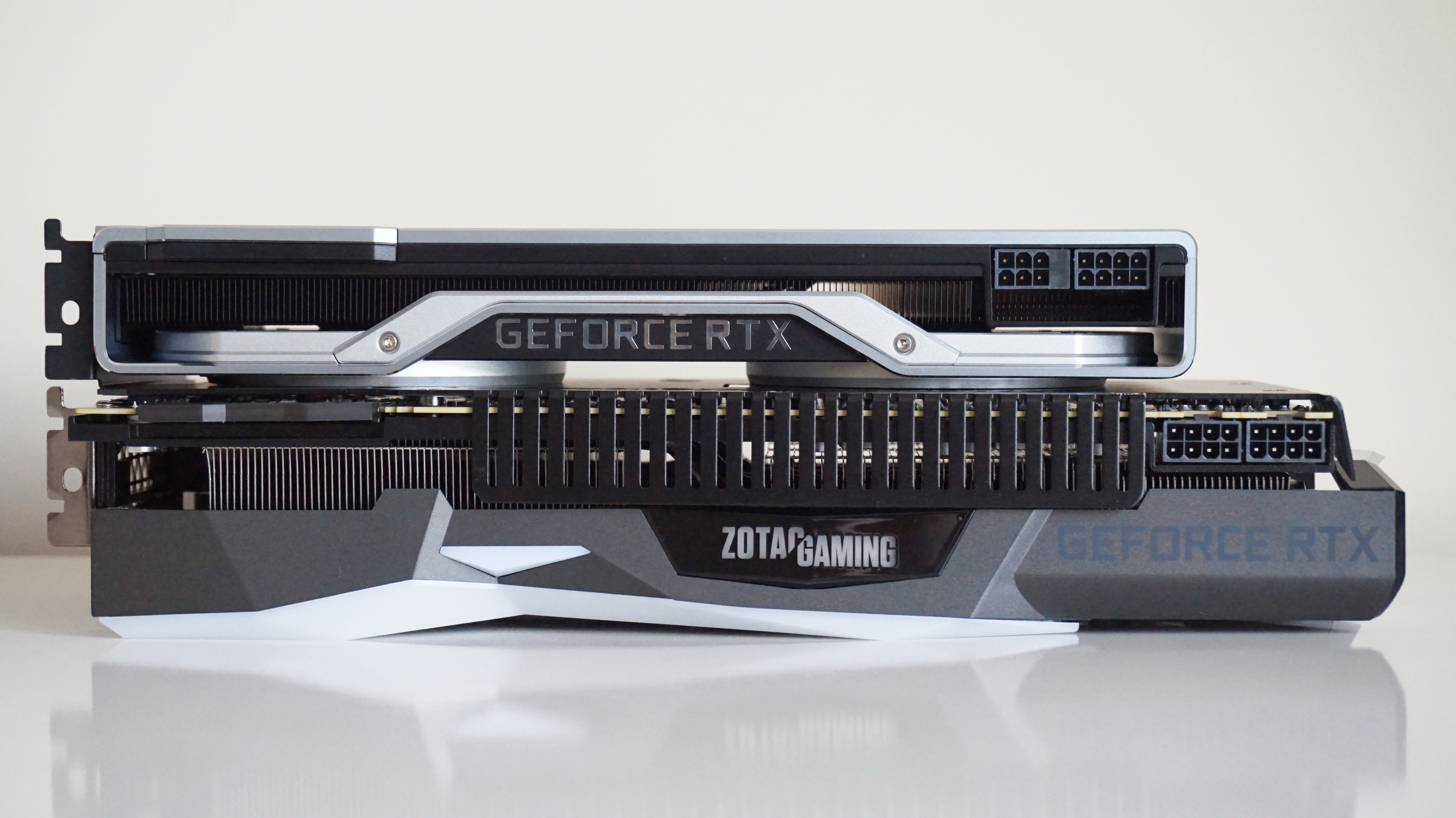 The main difference, though, is that higher boost clock speed of 1875MHz. It’s only 60Hz faster than Nvidia’s FE card, but (as we’ll see shortly) sometimes that’s all it takes to push its performance a couple of frames higher than its reference speed rival. That, and the AMP Extreme is absolutely covered in RGB lighting, which puts on quite the light show compared to the minimal green GeForce RTX logo you get on the side of Nvidia’s FE card. 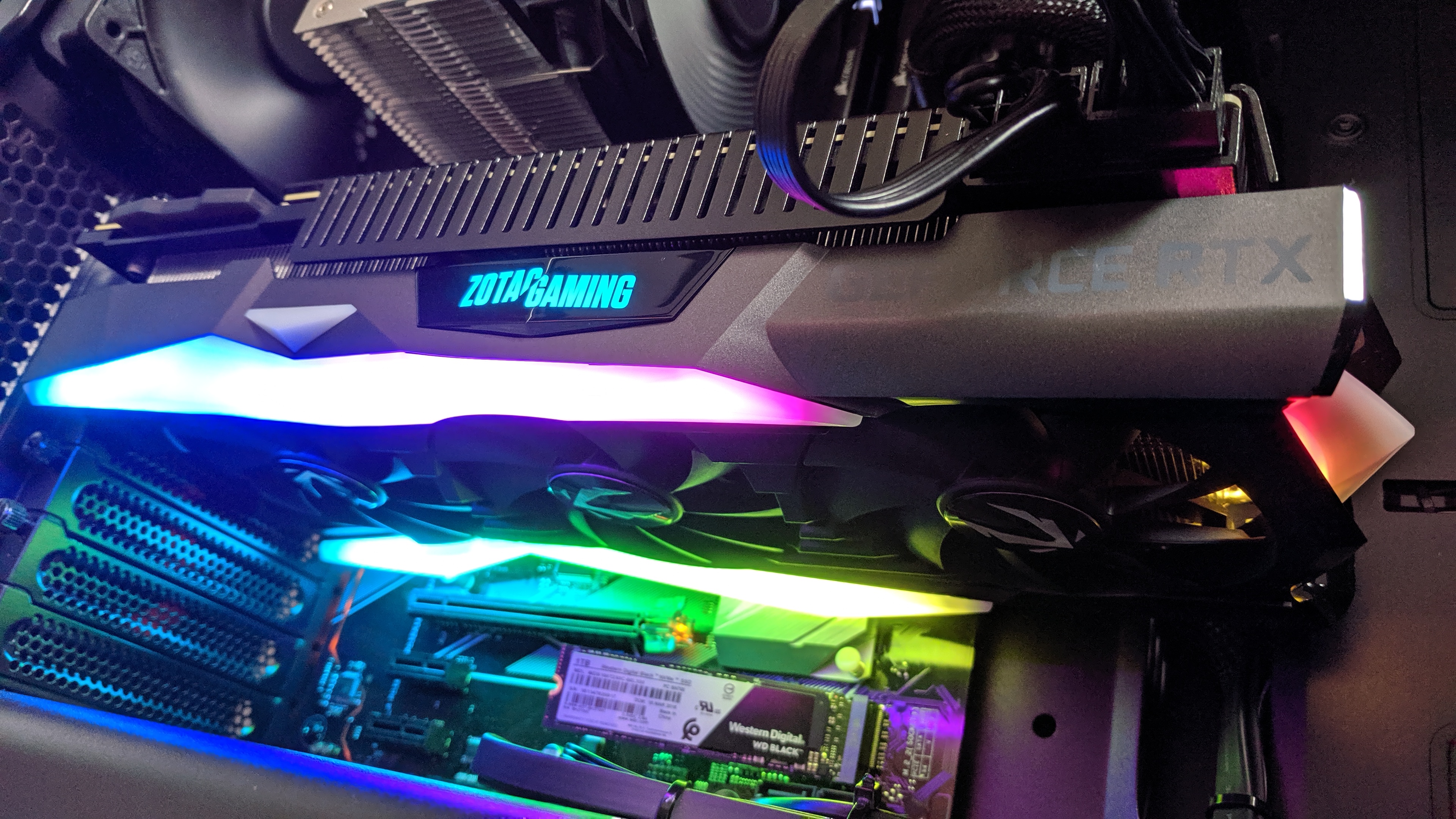 Zotac’s AMP Extreme Edition may be more expensive than Nvidia’s FE RTX 2080 Super, but it does come with a heck of a lot more RGBs.

Starting with each card’s 4K Ultra performance, then, it’s… err… well… pretty much identical. The Zotac pulls ahead by an average of a single frame in Assassin’s Creed Odyssey, Metro Exodus and Forza Horizon 4, but yeah, we’re not really talking any kind of appreciable difference here whatsoever. 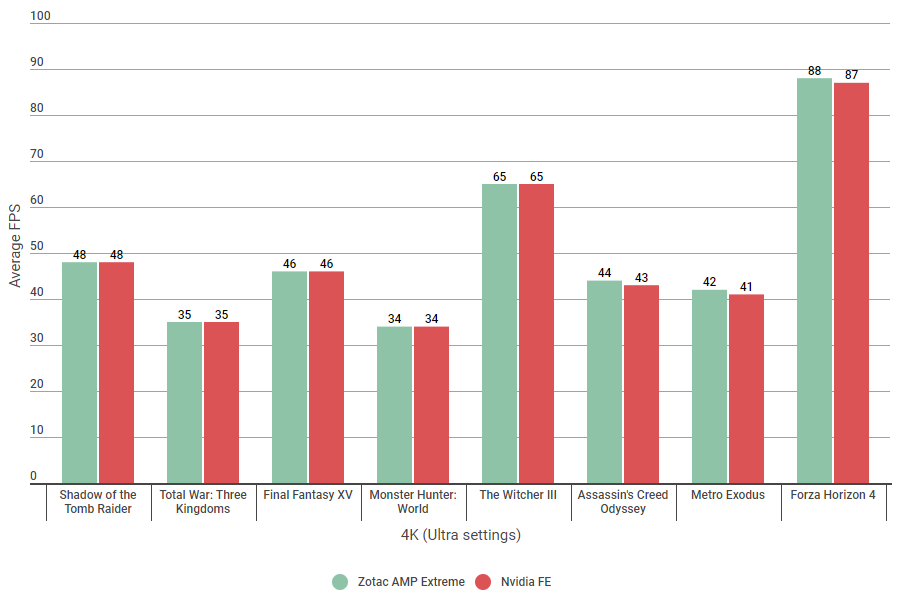 In truth, though, the RTX 2080 Super isn’t really built for 4K Ultra settings. I mean, it can do it in a handful of games, sure, but you’re going to get a much smoother experience by knocking the quality down to High. And here, the Zotac begins to make its presence felt a bit more. Sort of. 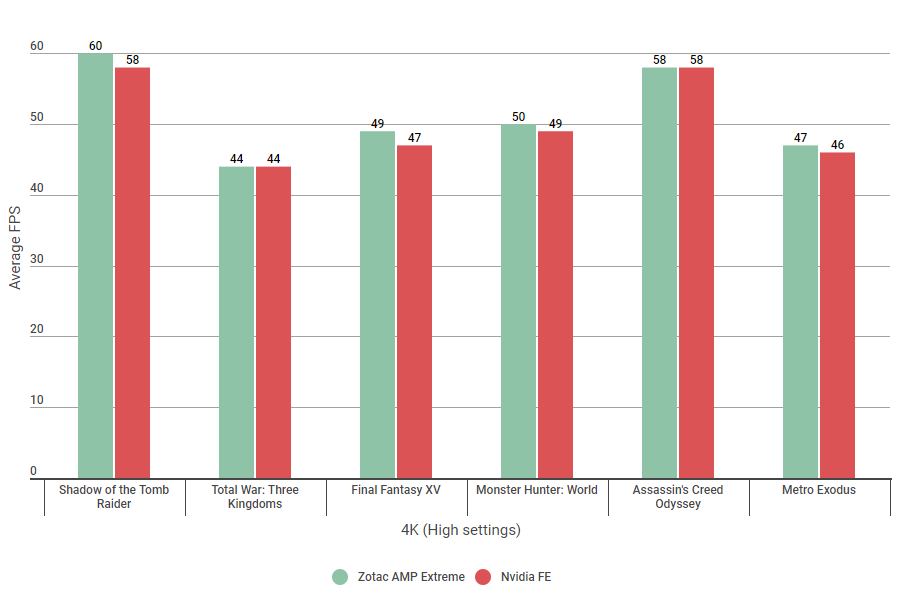 While it’s still neck and neck with the Nvidia FE card in a handful of games (eliminating the ones that could already hit 60fps on Ultra, of course), it was once again out in front in Shadow of the Tomb Raider, Final Fantasy XV, Monster Hunter: World and Metro Exodus. Again, it might not look like much when taken as an average, but what this graph doesn’t tell you is where the Zotac AMP Extreme picks up the slack.

In Final Fantasy XV, for example, the Zotac ranged was able to hit highs of 54fps on High, compared to Nvidia’s peak of 51fps. Both hit lows of 44fps, but the Zotac was able to push itself just that little bit further overall. The same gap emerged when I switched on the game’s TurfEffects and HairWorks effects, too. Whereas the Nvidia FE ranged between 36-44fps with these on, the Zotac managed 39-48fps, and it felt just that bit smoother as a result. The other games presented a much smaller boost to performance, admittedly, with all three just shifting their min-max range up by a single frame overall. 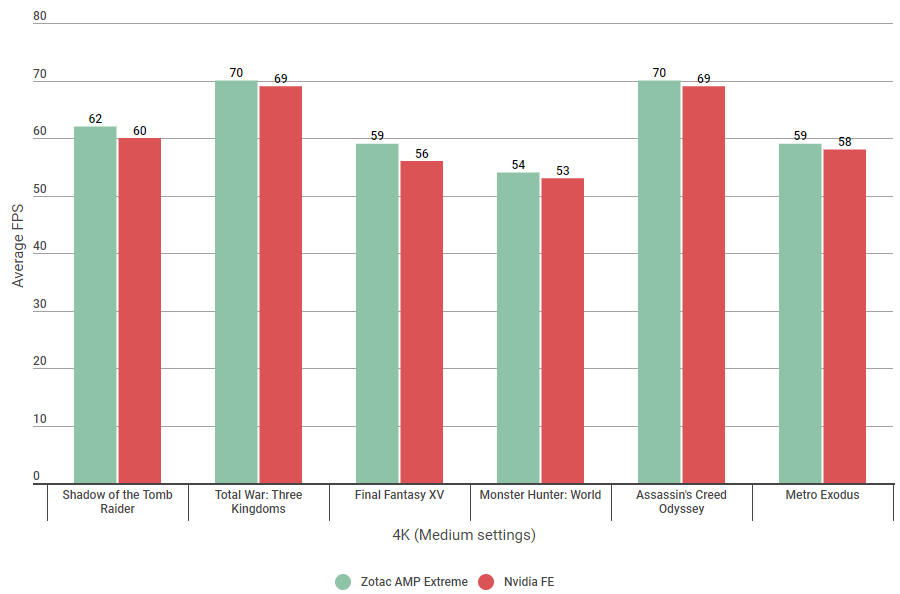 As for each card’s Medium 4K performance, the Zotac is once again a hair’s breadth in front of the Nvidia FE card here, but again, it’s really only Final Fantasy XV where you’ll might see a noticeable difference in performance. Not only was it able to hit a more consistent 60fps-odd without any Nvidia effects turned on, but it also kept it together a bit better when I did start turning those effects on. With TurfEffects and HairWorks enabled, for instance, the Zotac ranged between 47-55fps, while Nvidia’s FE card dipped between 44-54fps.

At 2560×1440, the Zotac comes into its own a bit more, but once again the emphasis is on ‘a bit’ rather than ‘a lot’. Like before, it might not look like much when you’re just presented with its average raw performance on Ultra settings, but look a bit closer and there are some sneaky gains to be had here. 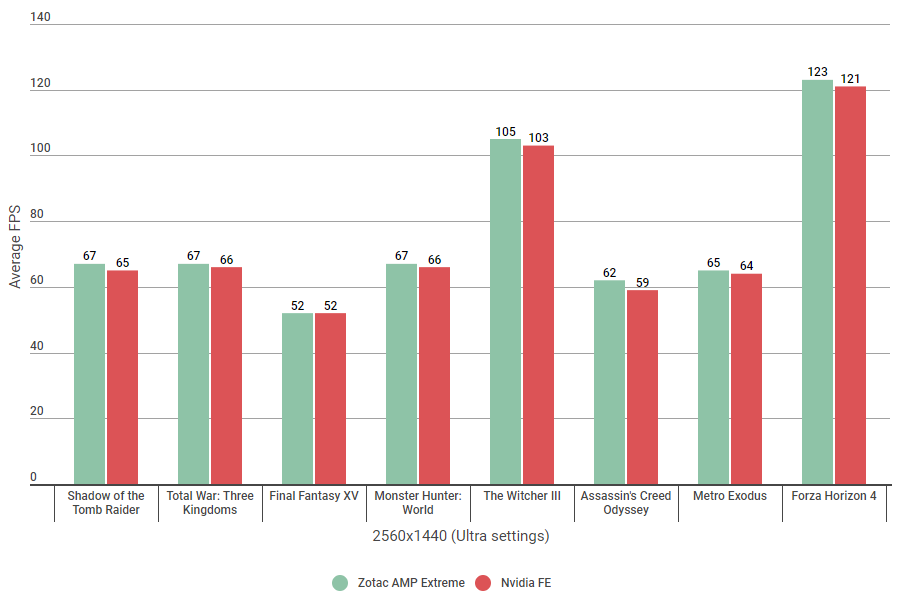 Take Assassin’s Creed Odyssey. You might think, ‘Pah, what’s a difference of 3fps?’ Well, what if I told you the Zotac only hit lows of 36fps, where the Nvidia FE dipped all the way to 24fps on occasion? It was also much smoother at handling Final Fantasy XV’s TurfEffects and HairWorks effects, too, ranging between 57-71fps compared to Nvidia’s 54-68fps. Sure, they both hit identical ranges of 48-57fps with everything whacked up to eleven (hence the identical averages of 52fps), but if you can’t be faffed with the game’s VXAO or ShadowLibs effects, the Zotac’s going to feel just that bit smoother overall. 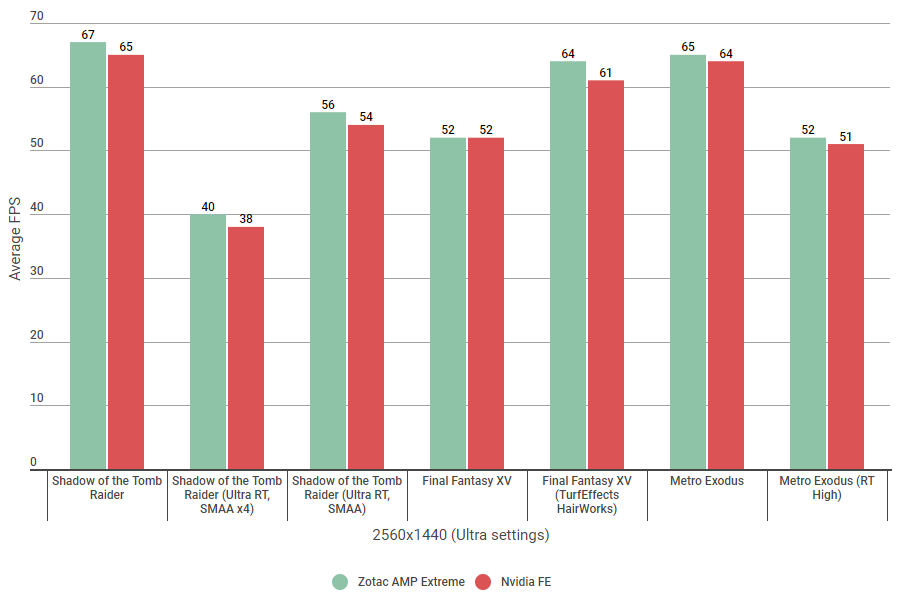 Zotac’s AMP Extreme RTX 2080 Super card was also ever so slightly better at ray tracing, too. In Shadow of the Tomb Raider, for example, it was an average of 2fps faster regardless of what anti-aliasing setting was enabled, and will probably once again feel just that bit smoother as a result. Metro Exodus was only another frame faster, admittedly, just like its regular, non-ray tracing result, but hey, a frame’s a frame!

Overall, then, I think we can safely say that the Zotac AMP Extreme is technically the faster of the two RTX 2080 Super cards, but when all’s said and done, I just don’t think the Zotac’s higher clock speed is really pulling its weight here. There are, admittedly, some nice quality of life benefits to be gained once you move down to 1440p and start adding in ray tracing and the like, but overall, I think you (not to mention your wallet) will probably be just as happy playing on Nvidia’s FE.

Instead, I’d argue you’re paying more for the Zotac’s RGB lighting than anything else here, which is fine if you’re into that sort of thing and want a nice big slice of rainbow blazing away inside your case, but for those who’d rather just get the best performance for the best price, the Nvidia FE is definitely the RTX 2080 Super to buy.