Last time on the BoC: With the fort due to be sealed up from the outside world by Dwarven Christmas, the dwarves spent the autumn getting their belongings underground. A ruinous tavern brawl seemed to be a bad omen for the cabin fever to come, until the increasingly autocratic Lorbam made an example of the perpetrator. Despite being the head of one of the most illustrious families in the basement, punch-happy Ushrir was locked in a cell with a beak dog, to demonstrate just what happens to those who disrupt the Leader’s vision.

Deep in Lorbam’s private quarters, behind a great portal of green glass, there is a chamber. Dimly lit and lined in rough stone, it is a place that no dwarves are allowed to enter, save the Basement’s mistress, Lorbam herself. And today, as winter’s cooler breezes stir through the forest above, something miraculous is happening there.

Curled on the floor, panting with exertion, is a female chimp. Her mate stands by, possibly looking at a bug or something, while Lorbam stares with the eyes of a prophet from the balcony above the pit. There is a gasp from the chimp, and then a thin, wailing cry – when the ape gets to its feet, it is holding a newborn in its arms. 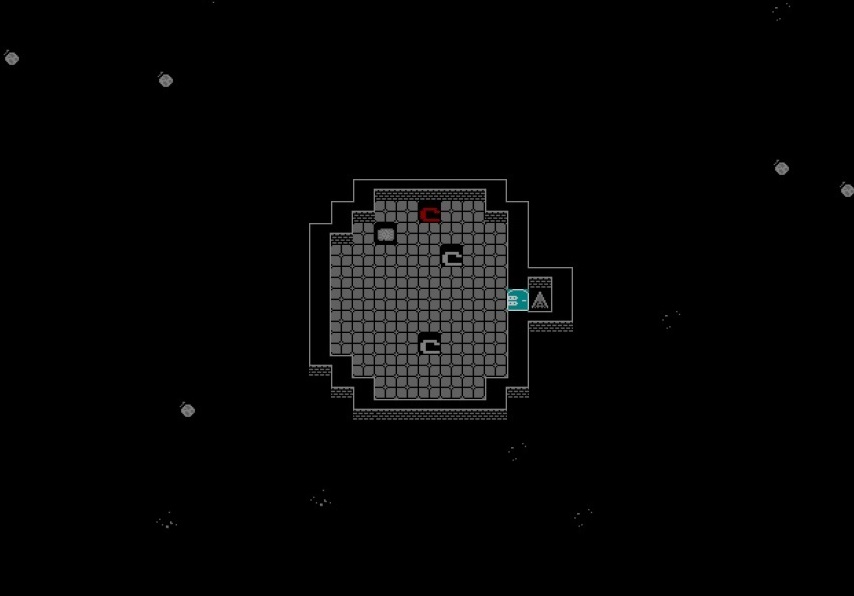 *’Circle of Life’ plays on a set of knackered bagpipes*

Lorbam screams in triumph, and runs out into the Basement to spread the good news, surrounded by a pack of dingoes and shadowed by her towering warbird, Hammercastle. At last, her dream of a subterranean primate breeding facility is coming true. A chimp has been born! The winter chimp! A sign from Zon, that the fort’s coming isolation is righteous and uncontestable.

As Lorbam runs through her zoo, the dwarves pacing the exhibits give each other worried glances, then offer her a smattering of platitudes along the lines of “that’s nice mate” and “glad to hear about your ape”. Even the warthogs, the koalas and the old black bear look a bit nonplussed. But congratulations are not enough: Lorbam must celebrate. And she has just the event in mind: a grand winter games.

At the north end of the zoo next to the aviary, a great arena has been constructed. Inside, using knowledge she gained from the Beakdog Experiment, Lorbam has herself erected two rows of cages. In one row, the fort’s domestic animals are penned, looking anxious. Their crime? Not being cool zoo animals, and slowing down time itself with their existence. In the second row of cages are a squad of captured goblins. When a lever in an adjacent chamber is pulled, a bridge will raise across the arena’s doors, and all the cages will be opened.

It will be a grand sacrifice to Zon, and Lorbam claps Id the snakebuster on his leathery shoulder – he shall have the honour of pulling the lever. Id thinks Lorbam has completely lost the plot, and he’s right, but what else can he do? Wearily, he trudges to the activation room, and pulls the lever. The arena door is blocked, the cages ratchet open, and an atrocity takes place. 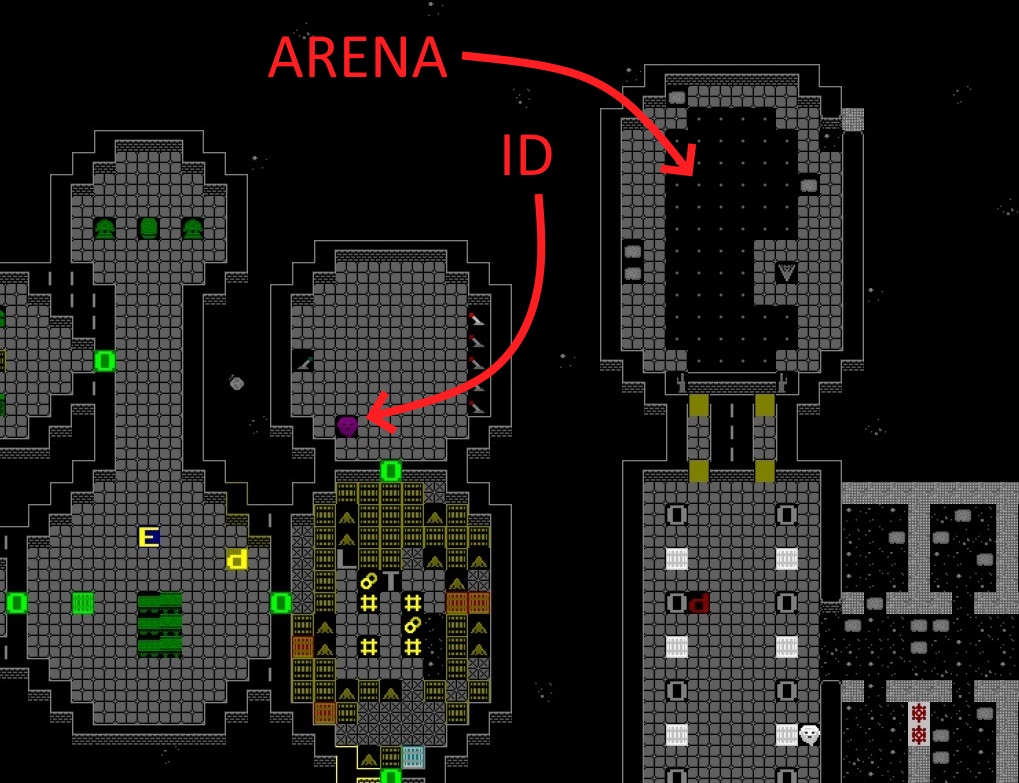 Oof. After last week’s beakdog incident, I’m going to save you a full description of the nightmare of gore that was Lorbam’s “grand winter games”, but rest assured it’s extremely violent. Honestly, it’s like the scene in Jurassic Park where the cow gets lowered into the raptor pen, only without the mercy of a load of shaking bushes to make it PG-rated. 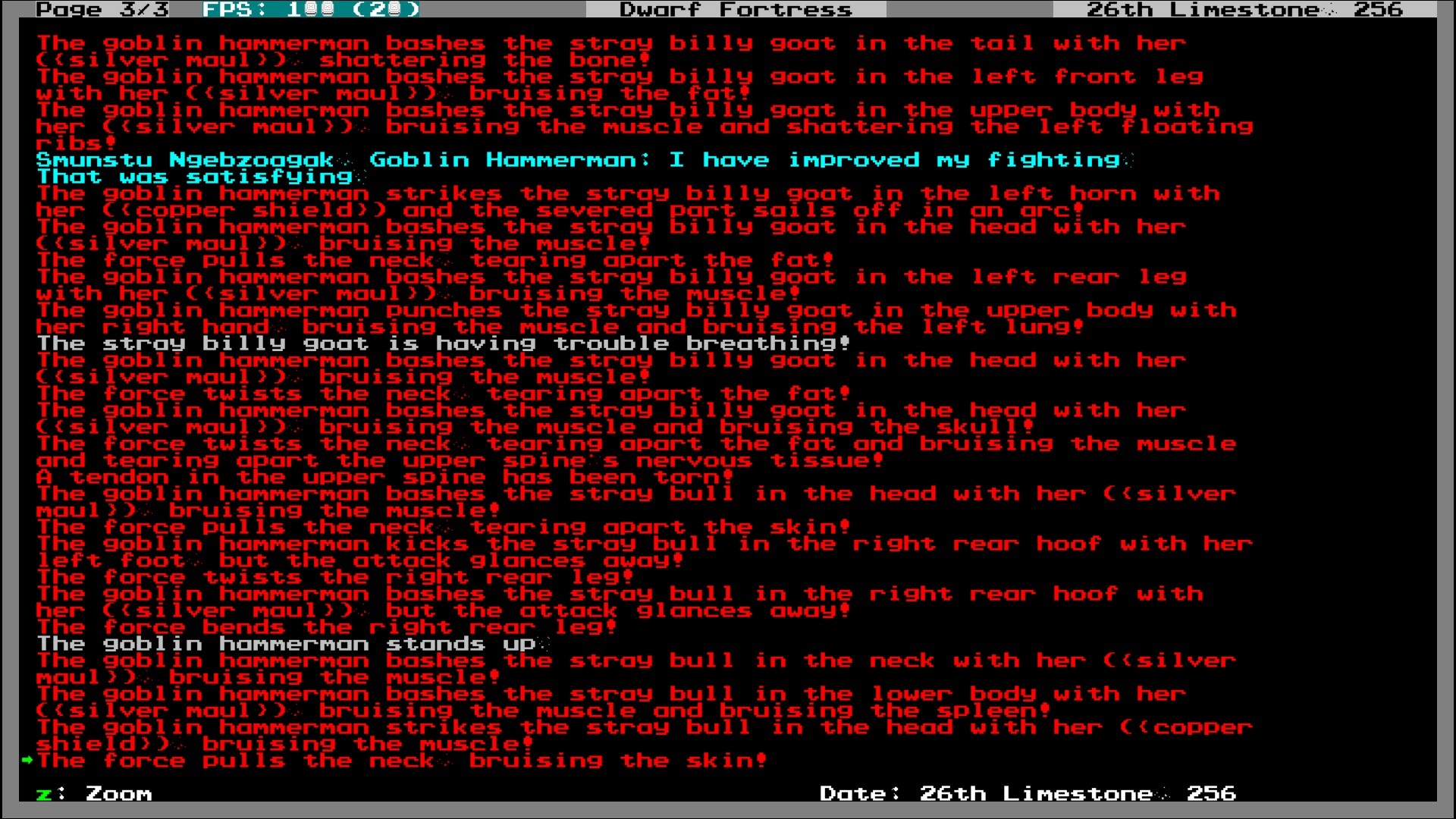 At one point, I see a goat’s severed neck fly across the room and smack into a wall. Not the head, mind – just the neck. The animals don’t stand a chance, either. At one point I think a pig makes a go at kicking a goblin, but that’s about it. 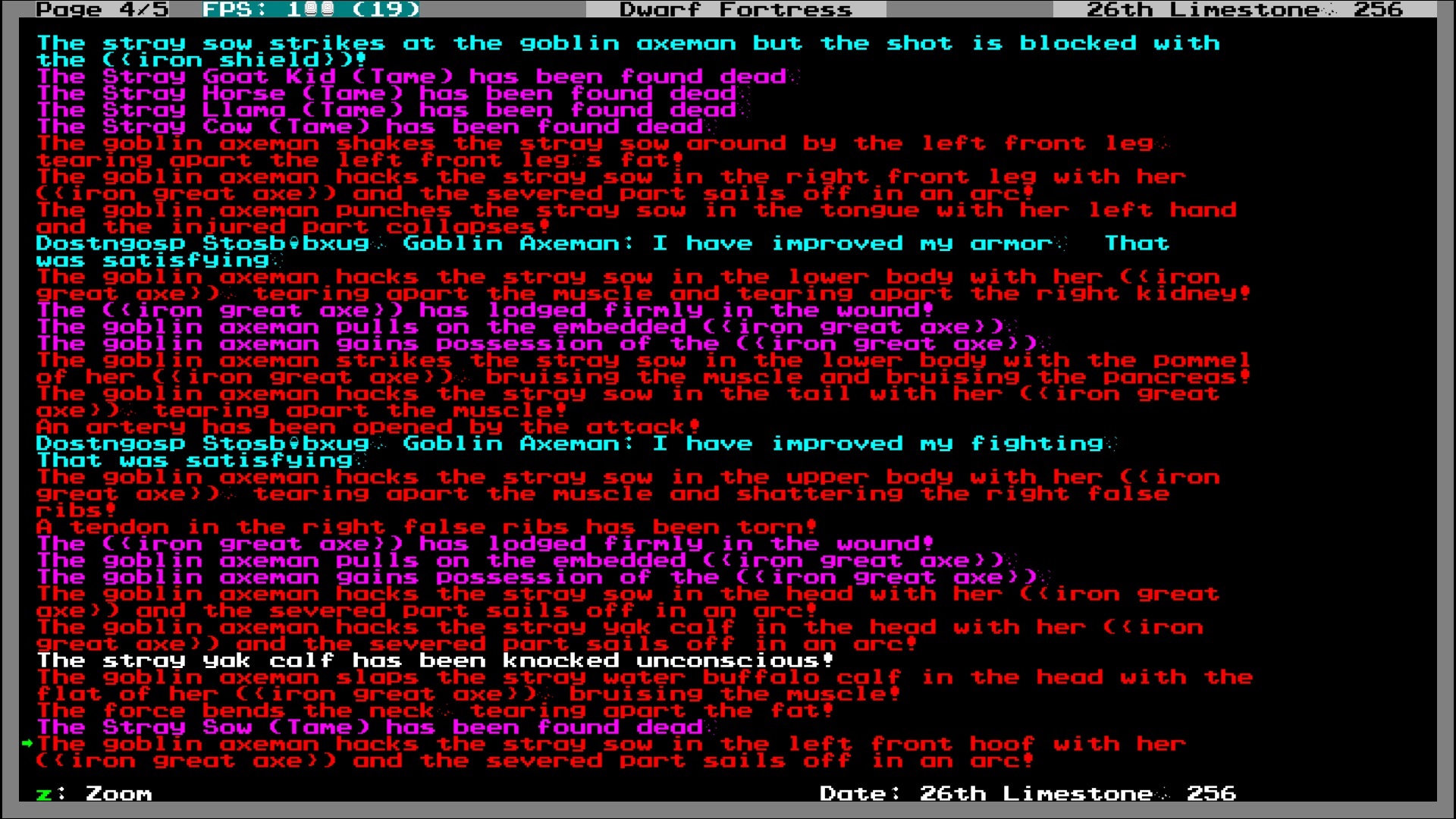 I suppose at least the goblins are having fun. After being cooped up so long, covered in slugs, with dwarves smugly reading them passages from “The World Without the Goblin” through the bars of their cages, they’re no doubt delighted to take it all out on some quadrupeds. Indeed, they seem jubilant, bellowing congratulations at themselves for improving their combat skills as they blast the walls with offal. Unfortunately, given the way DF’s experience system works, the weapons practice offered by the impromptu abattoir turns them all into seasoned combat veterans in the space of a few minutes.

Can you call something an awkward silence when the air is filled with the muffled screams of farm animals being obliterated, and the harsh cackle of goblin laughter? If you can, then that is what descends on the Basement of Curiosity in the moments that follow. Lorbam capers around on the gold surface of the Bird Hole, exulting her god, while the dwarves in the aviary try their best to concentrate on the nice lorikeets.

Id, meanwhile, has no time to be shocked – there’s work to do. When those goblins are done, they’re going to be utter beasts, and Lorbam’s no doubt going to want the arena cleaned. And so, cursing under his breath, the snakebuster sprints upstairs to his pub, the Great Harvester, and raises an army. There’s been a ton of rascals and roustabouts carousing away the months in there, and it’s time they made themselves useful.

The improvised militia is called the Diamond Shocks, and they’re a surprisingly capable lot. Their leader is Ebir, the scar-faced human noble who arrived a couple of summers ago, and her second in command is another noble – a dwarf this time, married to the Count of Orbstomb, but long since separated to pursue a life of adventure. He has a long moustache, and likes to eat ant meat. Under the command of these brutish aristocrats is a classic pub rabble – mercenaries, monster hunters and a couple of poets, all armed to the teeth. 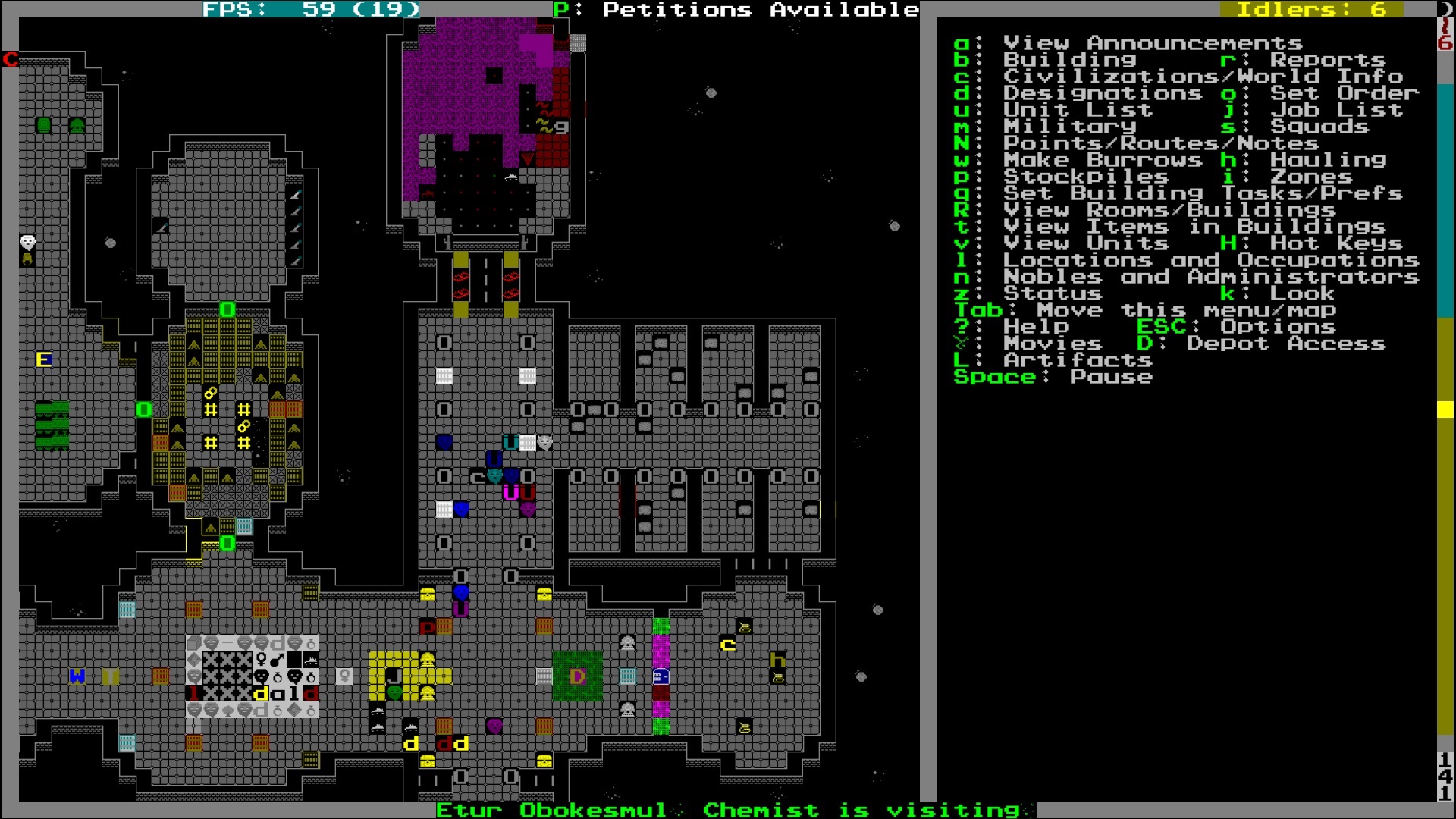 The dwarves wait for the fight to begin, while the inside of the arena ABSOLUTELY HUMS with rotting farm animals

After building a couple of traps loaded with spare weapons from the bins (“ah, the bins” thinks Imush, at the mention of them), Id lines the Shocks up in the aviary, and positions himself at their centre with his retinue of big cats. Then, with a stern nod, he orders the arena lever pulled, and the bridge slams down.

Immediately, a wall of choking miasma rolls out from the arena, echoing with the pumped-up hoots of a squad of excitable goblins. A hammer-wielding greenskin charges from the mist, but stops dead in their tracks as an iron pike erupts from the floor and skewers their brain. Lady Ebir rushes in and stabs a half-dozen holes in a goblin lasher as it emerges, and the Count consort of Orbstomb is moving in to support her when an axegoblin lunges from the fog and hacks straight through his shin.

Luckily, the rest of the Shocks close the distance in time to push the goblins back into the arena, and make short work of them with only a few puncture wounds and gashes to show for their efforts. Id even gets to do some of his customary tanking, standing in the doorway and putting goblins in bizarre wrestling holds while Ebir fills them with steel. Barring the consort’s foot, there are no losses, and Id is quietly impressed with his militia – that could have gone a lot worse.

Indeed, while mayor Urist forbade any sort of standing military in the wake of the War Mayor debacle, she is increasingly ineffectual as a leader, and so Id decides to quietly ‘forget’ to disband the Shocks, and goes so far as to accidentally allocate them a barracks to train in, down in a quiet corner of the habitation floor. 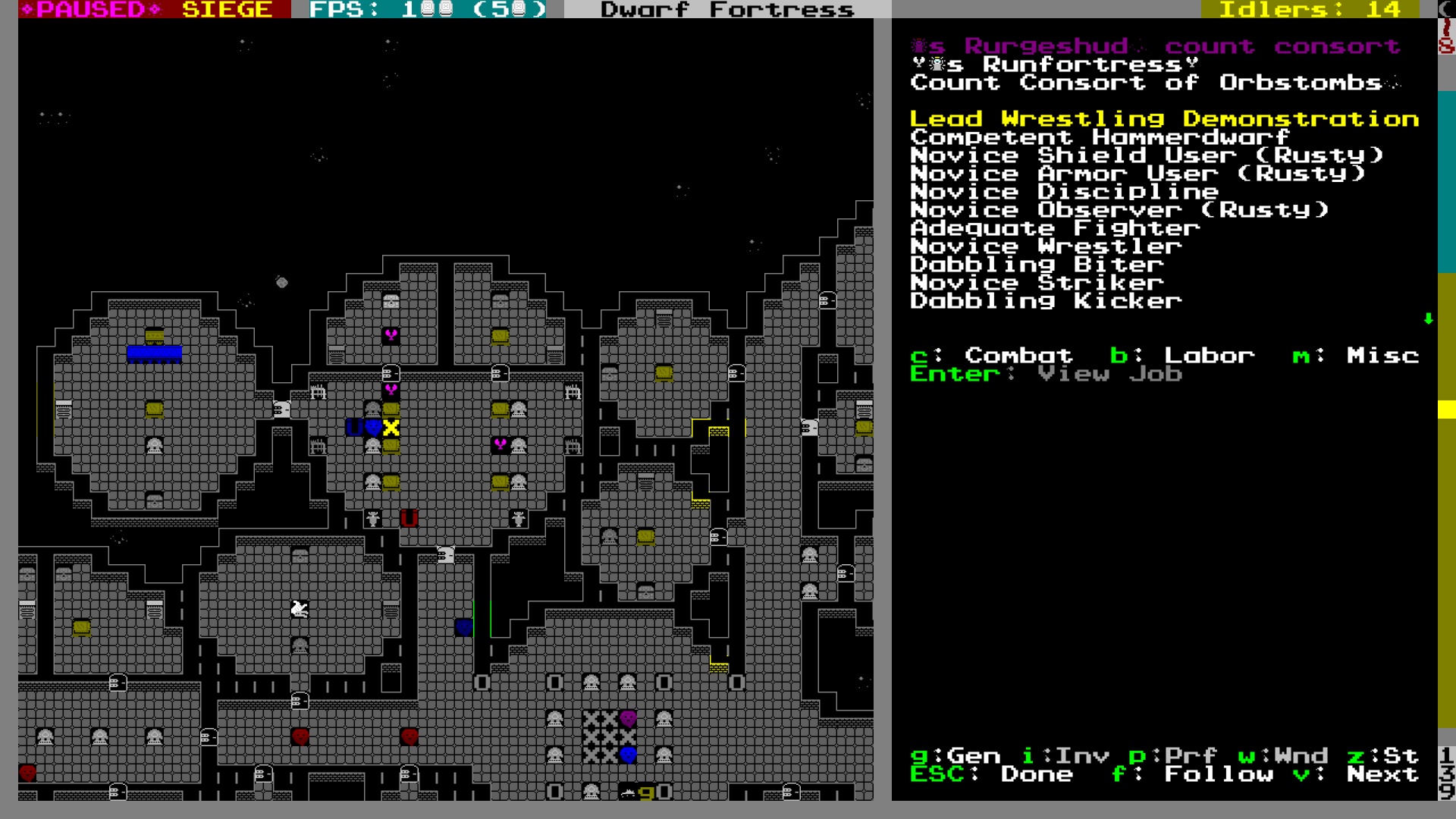 The count consort is leading a wrestling demonstration here, despite only having one foot. Utter mad lad.

Somewhat stunned, the dwarves began cleaning the blood and the mounds of body parts from the arena interior as Lorbam applauds. But if Id thinks this will mean peace for a while, he’s mistaken. Reports are flooding in that a mob of dingoes is causing trouble up top, and considering he made his name fighting the bloody things, Id is immediately summoned to deal with the problem.

It’s not uncommon for packs of dingoes to travel past the fort’s entrance – there’s usually a group or two each year. But for some reason, this lot is nasty. Two of them have chased a visiting philosopher up a tree and savaged him (although he managed to mortally wound both, leaving a bizarre tableau in the branches), while another couple have run down one of the fort’s hunters and gnashed her up. 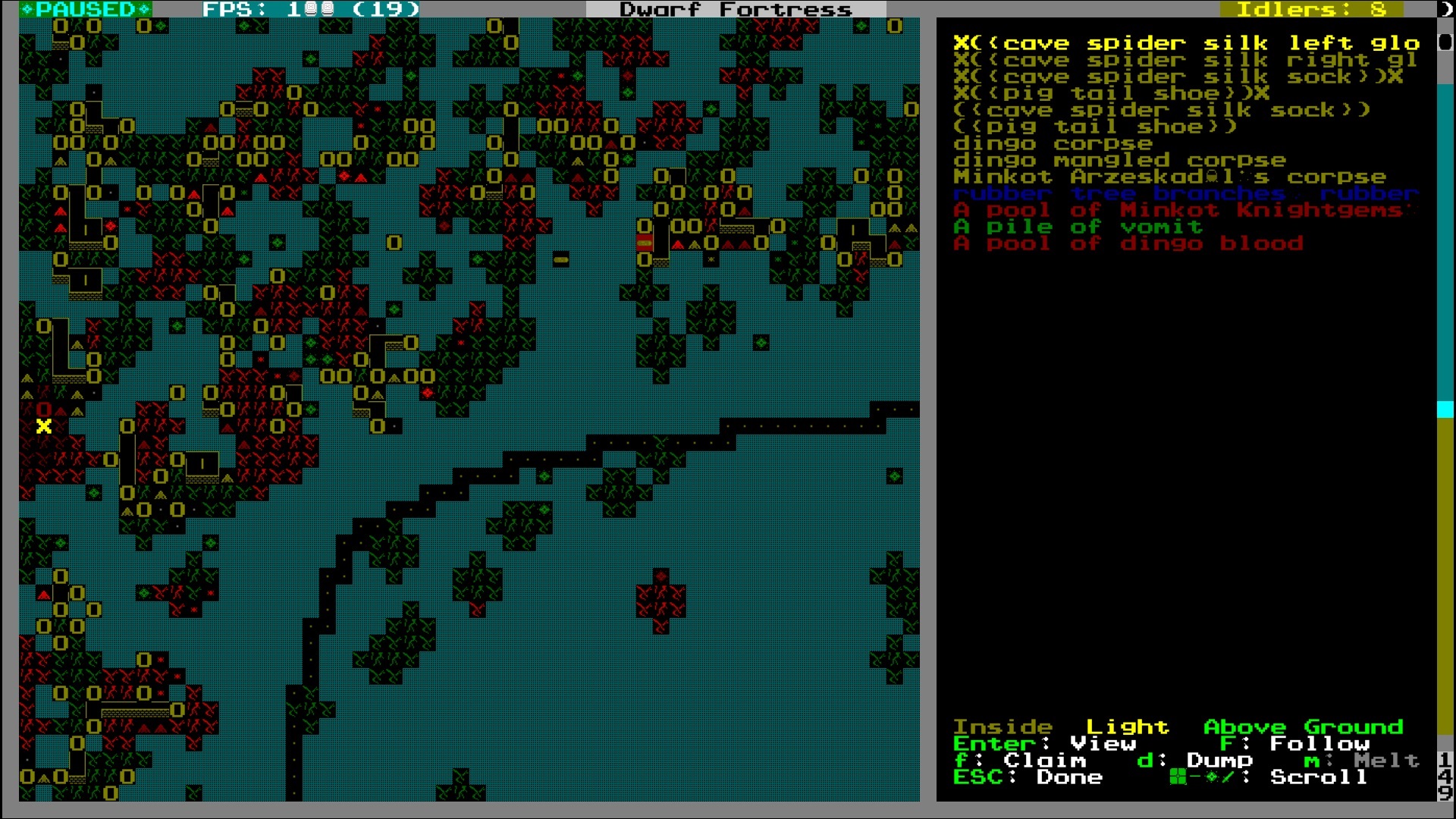 What the hell happened in this tree? Alas, I’ll never know, since whenever I try to access the details of a fight that’s been over for more than a few seconds, the details have been erased by the game in its frantic struggle to free up more space to store combat logs from the eternal struggle that is the Bird Hole. 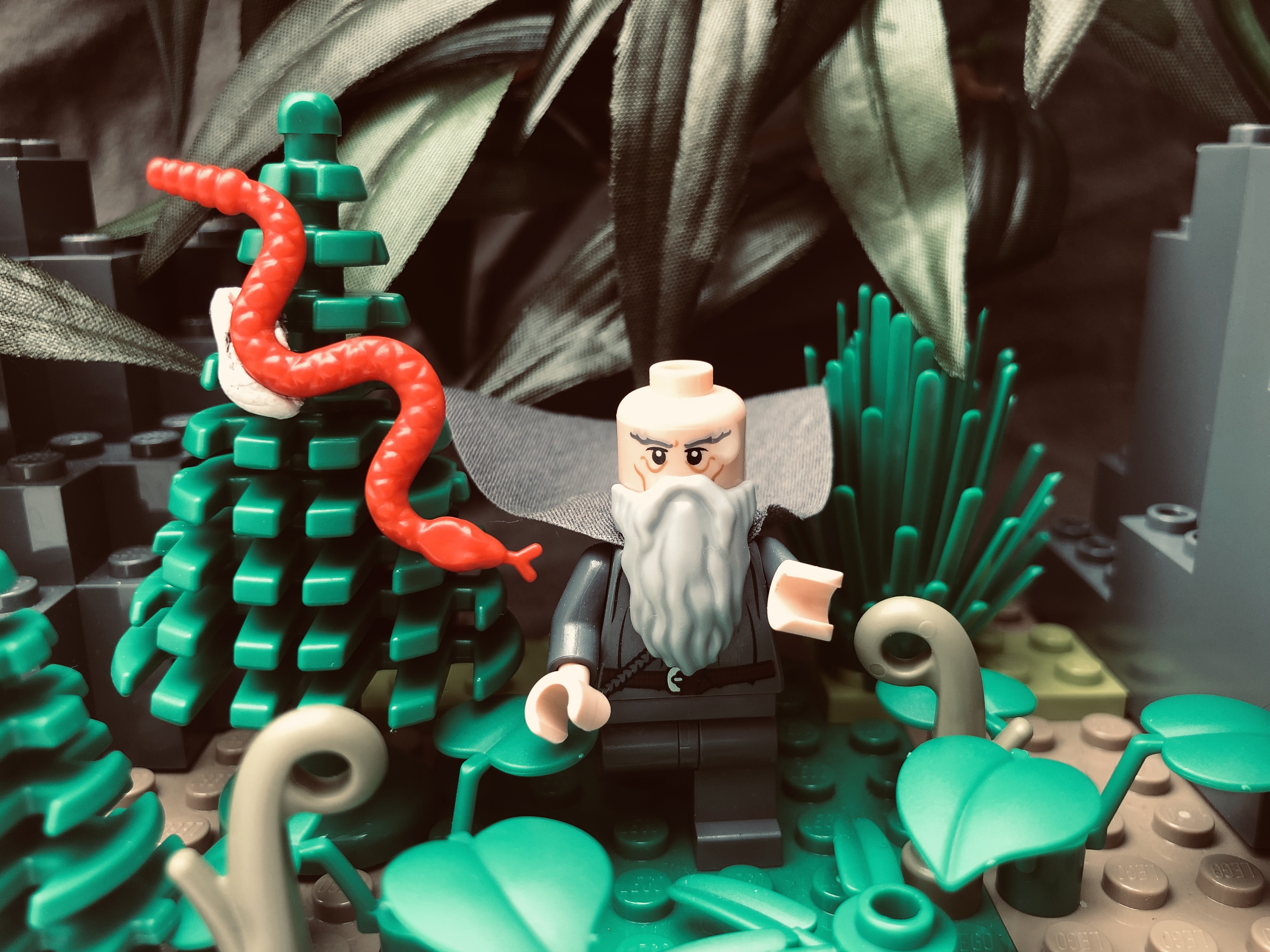 Once again, let’s hear it for my wife Ashleigh, who just sat down and casually made this diorama of Id legging it through the jungle., She even applied a bead of sweat to his forehead with a toothpick. She’s a marvel.

Their leader is a legendary beast called Mobbedscour, which has just torn the throat out of a swordsdwarf when Id arrives outside the walls. The dingo’s jaws are dripping with blood, and Id smiles darkly as he levels an accusatory finger at it across the jungle floor. Snakebuster, you see, has not lost his taste for one-on-one animal combat, even after the horror of the arena. This is different: this is how it should be done.

Sure, Id thinks, charging across the leaf litter, faster than any of his cats, he could have sent the Shocks to do the job. They could use the practice, after all. But as he slams into the wild dog, dodging its jaws and grappling its front paws, he knows he wouldn’t give this up for the world. And yet soon, he must. With the fort being sealed off in just a few weeks, this might be his last chance to rumble in the jungle. Yes, thinks Id, seizing the beast’s throat with his scarred fists, an era is coming to an end. He’ll miss this life.

As he pulps Mobbedscour’s head with a single punch, it is done almost wistfully. 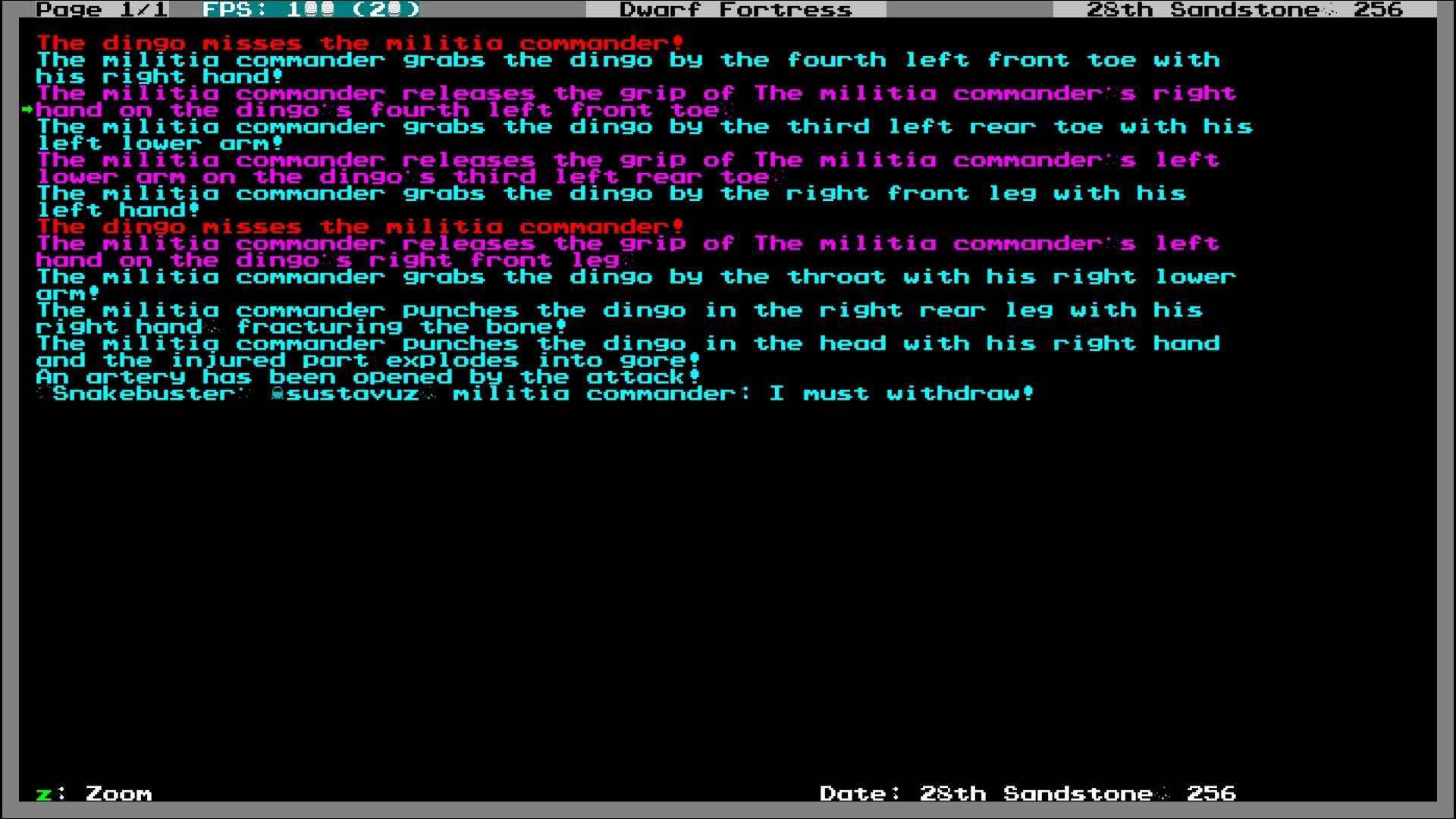 Ah, Dwarf Fortress. What does it say about this series, when the hero of the piece pops dogs like balloons in order to relax?

Next time on the BoC: The gates are sealed – and just in time (it was meant to happen this time, but dingoes happened). A dread new machine is unveiled, and a splinter colony is founded. 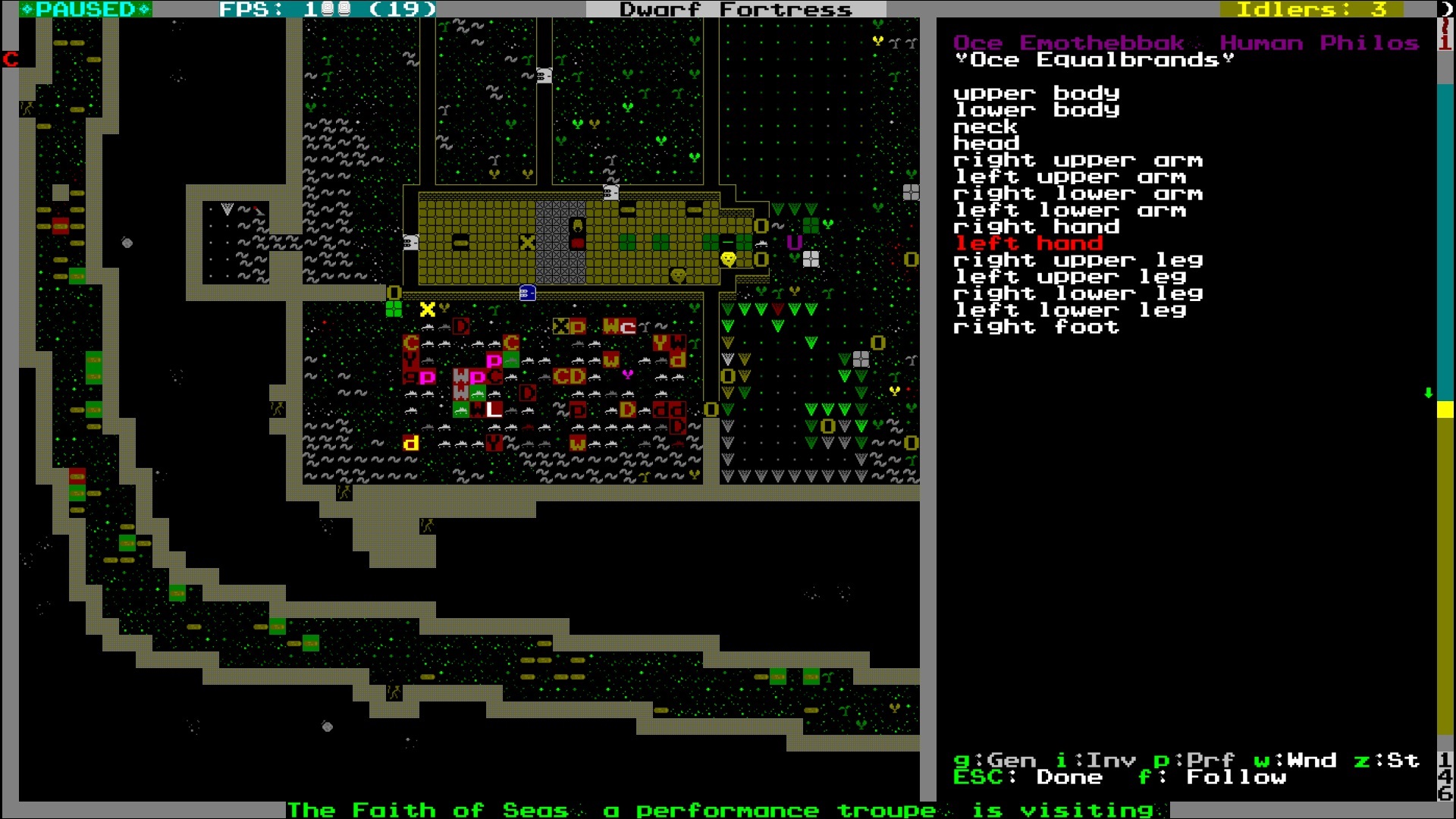 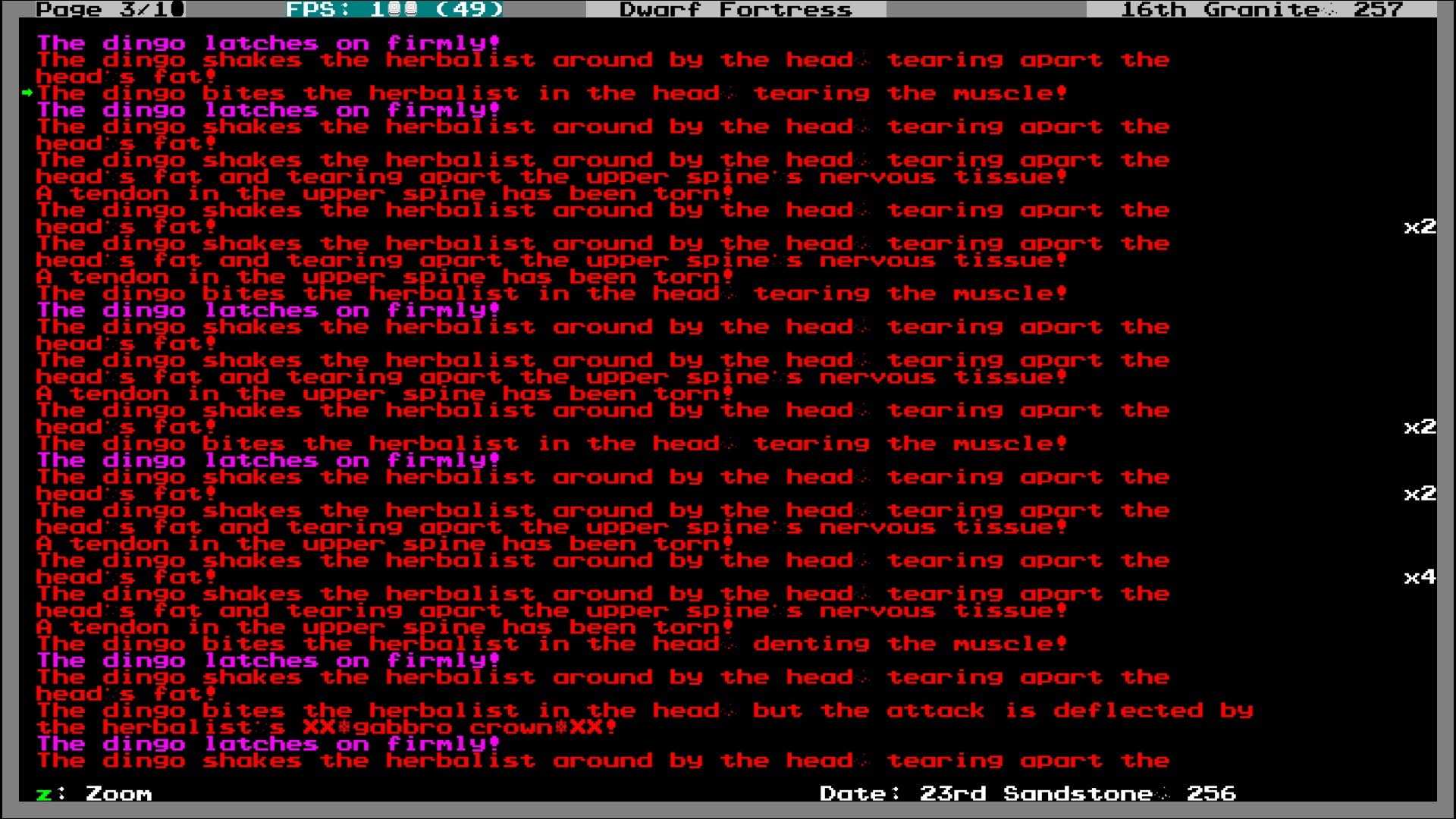