You may have noticed that some of us have been playing a lot of Minecraft lately, topical, finger-on-the-pulse website that we are. Nate set up an unofficial RPS server, prompting everyone to clack together wood and stone and iron to carve their creative path through the chasm-marked green idyll we appeared in. We’ll turn the dangerous ravine into a harmless water feature, the gang said. We’ll drive out the monsters and tear down the trees they shelter under, and civilise the land, they said.

Well not me, my friends. Not bloody me.

I like the land. It’s where I live. Much of Minecraft’s appeal to me has always been exploring and adventuring. When it comes up in conversation, it’s never long before I relate the time I tried to rescue a lost sheep only to find a gigantic abandoned mine underneath a frozen river. I played it with permadeath before that was a thing, and spent several years on and off trying in vain to find the cave I’d sheltered in on my first ever night, back in 2011. I build small, if at all. I wander. I watch. I hold mansions of obsidian and diamond armour in open contempt.

I am, in short, destined to be the server’s suspicious, mildly feared hermit. 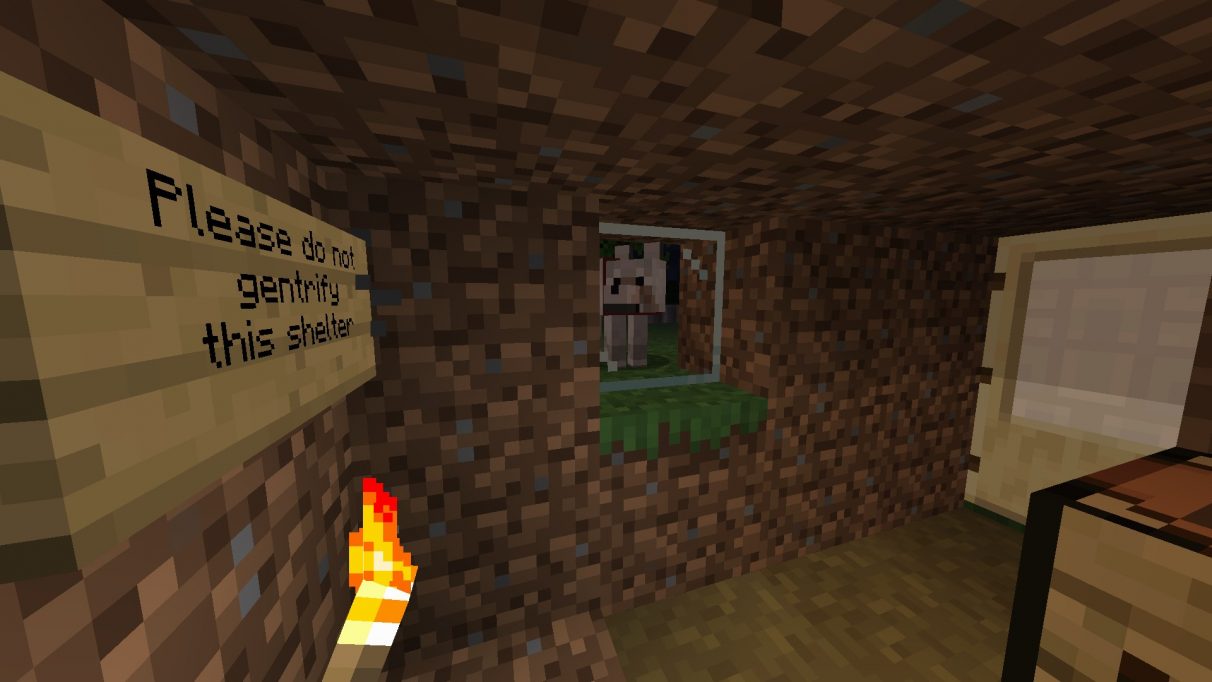 Who left the dog out?

Within minutes of starting, I fell into a gorge. As Nate told me of his homestead near to spawn, I clambered out of the gorge and saw his “little shelter”. It was bloody massive. A huge, detached wooden castle on a hillside, beaming with torchlight. I scowled, and dug my home a few metres into the earth near the canyon. Live and let live, I thought. I won’t try to stop them, they can just stay over there, with the crevasse separating us. I issued no ultimatum, just a simple pair of signs in my shelter, clarifying the two holiest truths: “Please do not gentrify this shelter” and “Games are bad”, neither of which needs explanation. I built a staircase out of the northeastern end of the cleft, to guide any newcomers to a spot where they could see both the town and the wilds. It is a nice view. To the north, there is a hill with a chicken on it.

They drove me out, friends. Oh, not by force. But their axes felled my trees, their torches reappeared day after day. They even took apart my stairs. I replanted, I disentorched, I replaced the earth they cut away in an ugly, sheer line behind my nobly unadorned shelter. I was not unpleasant. I gladly delivered stone and small gifts, and left a box of signs in their town square, with an invitation to post requests up there for food and any items I might be able to acquire and deliver for them. A hermit can be a good neighbour. 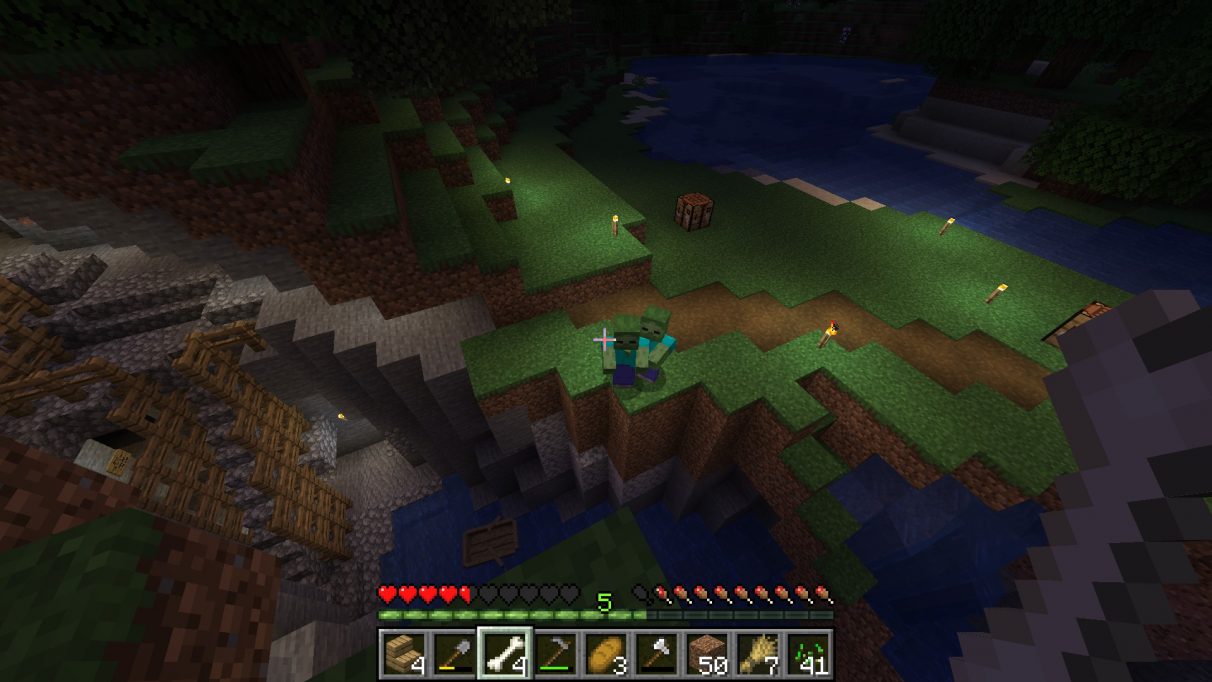 To the left: two flights of stairs, with paths cut on each side for workers to pass by. Now gone. Ingrates.

Then the final straw came. I came back one night to see what they’d done. A fence. Their fence had crossed the chasm, reached – lord, it must have been made of my trees – and surrounded me.

They fenced me in. The indignity of it.

And through all this – through all this, would you believe, I was protecting them. Surely drawn by their sinister experiments and obscene portals to forbidden, evil dimensions, demons circled their shared house every night. As the townies hid ever longer below the soil, it fell to me to slay these creatures.

Night after night I ascended my tower: the solitary birch tree left in town, symbolically planted in the roof of my home. I stood watch, and I fought the beasts. I farmed and explored by day, and by night I defended the town from demons with nothing but a crossbow and flint axe, fighting off dozens while the townsfolk did nothing but incite more to come. “This land is cursed!”, I’d cry on the few occasions when people appeared, “you must end this madness!”. “lol”, they’d say. They warped even words. 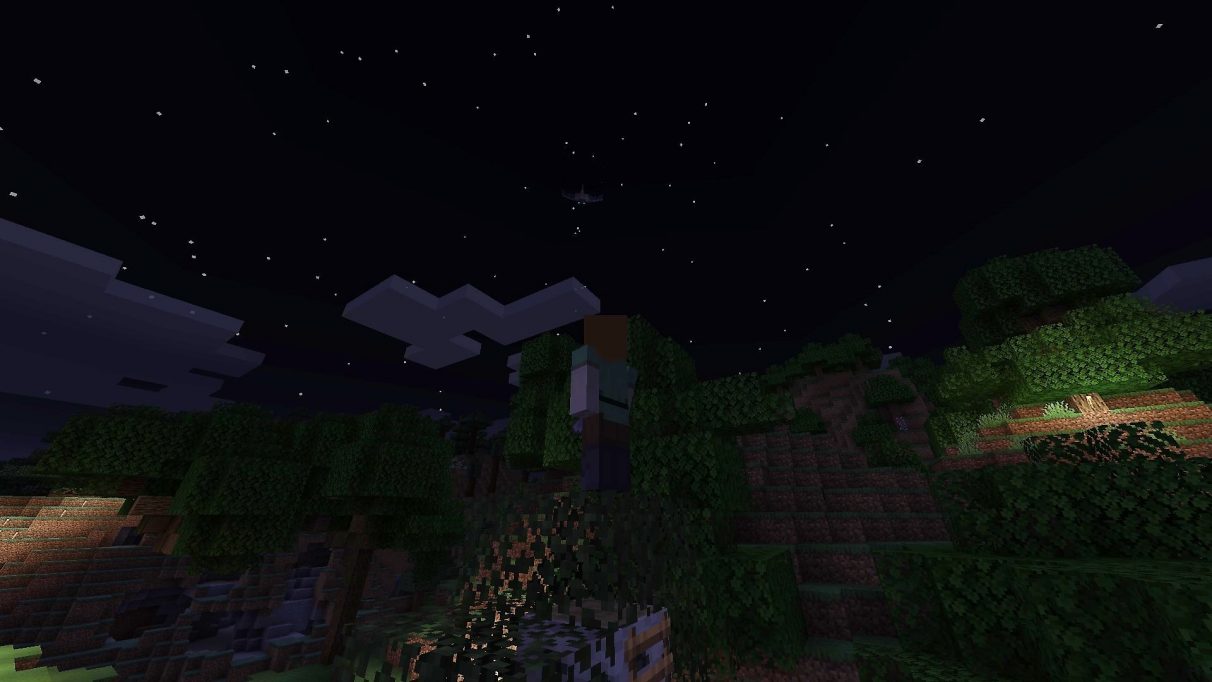 One? You send ONE tonight? Are the others too afraid?

I took solace in the animals. North of my den, in the sacred land of Maurice the Hill Chicken, a pair of wolves would appear sometimes, chasing away the loitering skeletons. In time I befriended them. Honcho and Cape protected me, raised my spirits, and followed me everywhere.

After a time I left. An effort to herd sheep had failed when they were replaced with a suspiciously contented wolf one morning. I looked at my dogs and realised what they’d been trying to tell me: there is freedom in the north. I gathered all we owned, rigged my shelter to explode when they would inevitably defile it too, and pressed north, into the unknown. My birch still stood, but I’d carry it with me – Birchbark, that would be our name, I decided. If you ever saw a clutch of birch trees, and heard the barking of dogs, perhaps you almost found us.

Next time on Hounded Out: The Naming of the Third Dog, and the Battle of the Pitted Witch.