Surprise! This is the end of the first season of the Basement of Curiosity – but it’s not the end of the story. The series is taking a break… but only because Nate needs to get ready to go and chat with Tarn Adams, the creator of Dwarf Fortress, on Sunday 1st September. Read on to find out more…

On the last day of the seventh year of Lorbam’s fort, the dwarves see sunlight for the last time. The last stairs up to the jungle are kicked down, and stone slabs hammered over the holes left behind. The final team of workers scuttles down into a nondescript tunnel beneath the trees, and it is walled up from the inside. At last, the fort is cut off from the world. 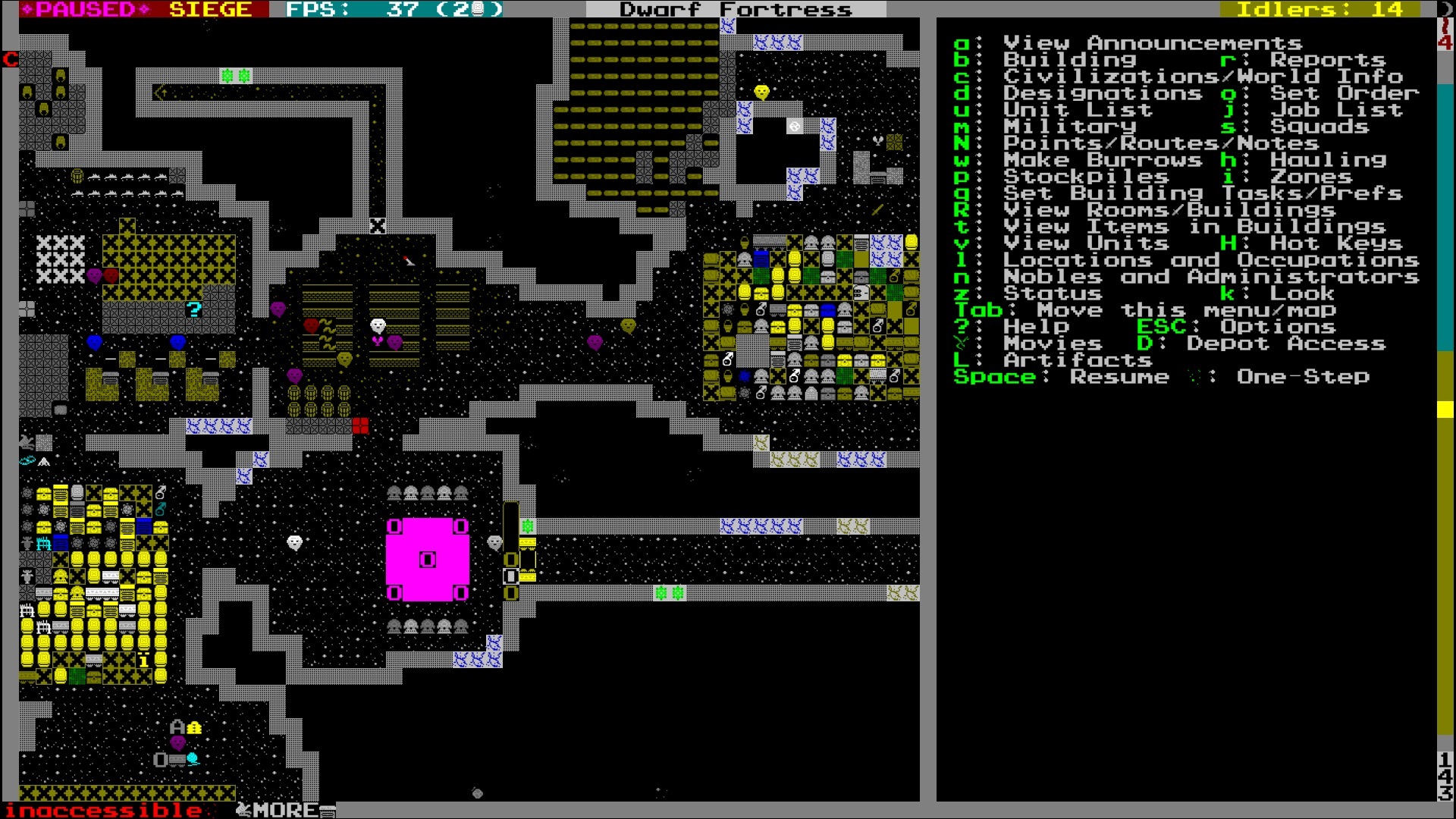 The last tunnel to the surface is walled up…

The dwarves are late, of course. Lorbam commanded the sealing to occur on dwarven Christmas, but the festival has been and gone. It was a muted affair, this year. Still, the deed is done, and if the Basement’s mistress notices her people’s tardiness at all, she doesn’t seem bothered by it.

As the last of the sun’s rays are extinguished from her halls, Lorbam is in a new chamber off the fort’s central shaft, working on a device she calls “the Busticator”.

For some time, the eccentric ruler has been obsessed with battling the ever-increasing viscosity of time in the Basement – it was why she ordered all the non-exotic livestock slaughtered in a monstrous arena battle, and why she has been petitioning the fortress god Zon to abolish the concept of temperature*. But the Busticator is… something else.

* I cannot control the will of Zon any more reliably than Lorbam, of course. But I have control of the init text files that feed into his holy cogitators, and so I can stop him being aware that temperature is a concept. This should speed up the FPS at which dwarf fortress is displayed, at least somewhat.

A simple pit in which a heavy stone drawbridge has been constructed, it acts as a dumping ground for any items or entities Lorbam considers superfluous. Once enough have piled up, a simple pull of a level in a neighbouring room will bring the bridge down at orbital velocity, completely obliterating anything beneath it. 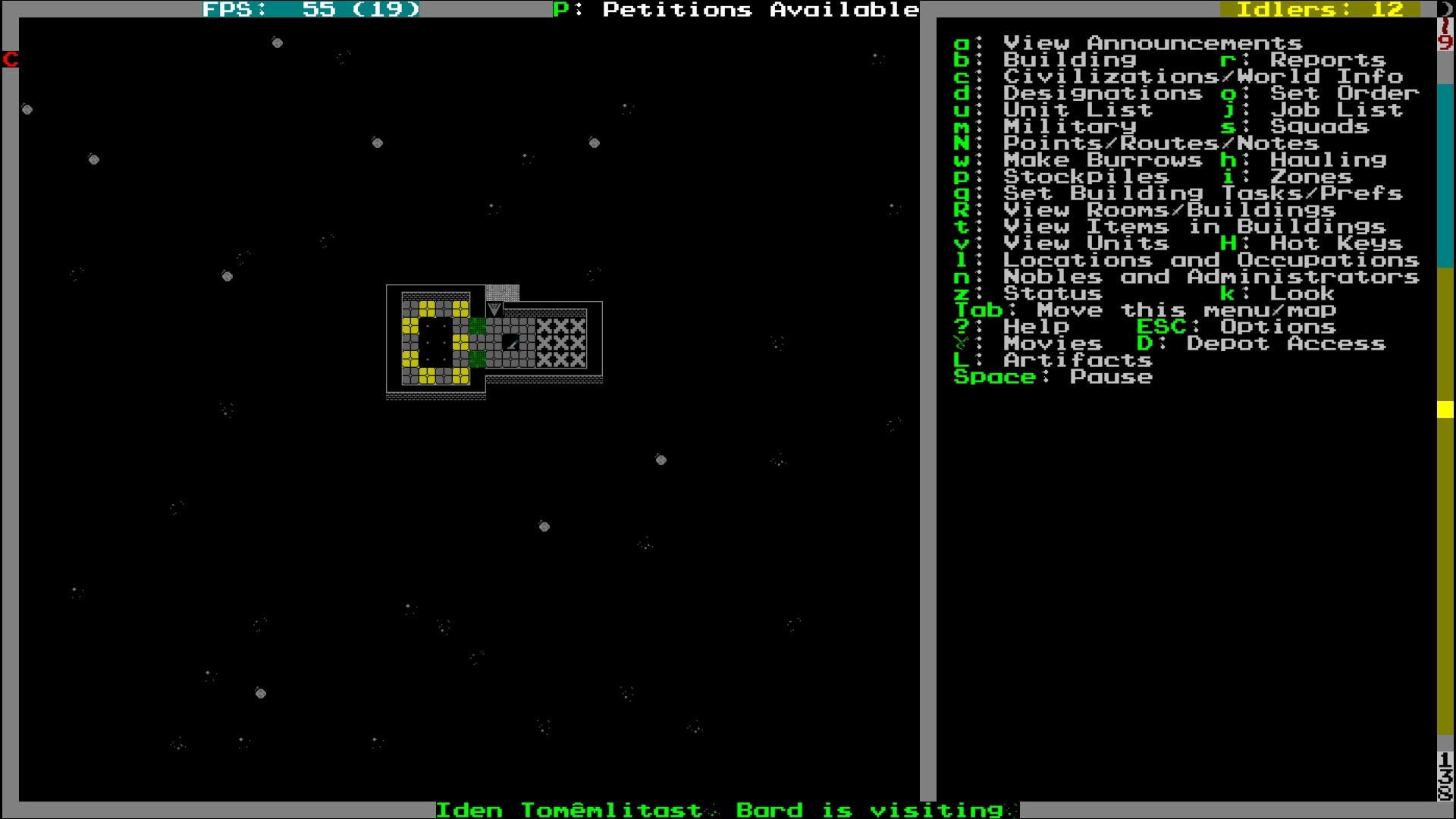 The Busticator. Check out those sick Sonic the Hedgehog hazard stripes round the edge of the pit!

After the Busticator is reset, not even dust remains. It is a device capable of completely destroying matter. And Lorbam is sure that if she can reduce the number of items in her world enough, time will begin to move faster, as it will have less to think about before each step.

Alas, the device has been temperamental so far: in its test firing, it merely flung a load of filthy socks all over the place like hobo confetti. And so Lorbam is down on the smashing floor, muttering to herself as she tinkers with the machine’s guts. Up above, just a couple of yards from the activation lever, Id stands, his eye twitching. It would be so easy to end all the madness now – but it would not be right.

No. Lorbam’s end may yet come, in the long darkness that is ahead, but it certainly won’t happen so dishonourably. Lorbam claps with delight, scampering out of the pit, and the moment is gone. As she pulls the lever, shrieking with joy at the Busticator’s thunderous activation, Id’s eyes drift to the engraved floorplate beside the machine instead.

It depicts Kebonurvad, “the odorous seal”, a design of three sceptres that serves as the fort’s symbol. Id has never really thought about the symbol’s name before, but now it seems strangely fitting. The fort is being sealed after all, and with chef Ushat’s hellish roasts of preserved offal and kilo after kilo of goose eggs, the fort is going to get pretty odorous, pretty soon.

Trapped in the dark with a chimp-breeding maniac and a hundred egg-chugging dwarves. Yep, this is going to be a time to remember. But as our view fades out from the dank confines of the Basement, let’s enter the mind of Id, and see what he’s thinking as this new era begins (click to enlarge): 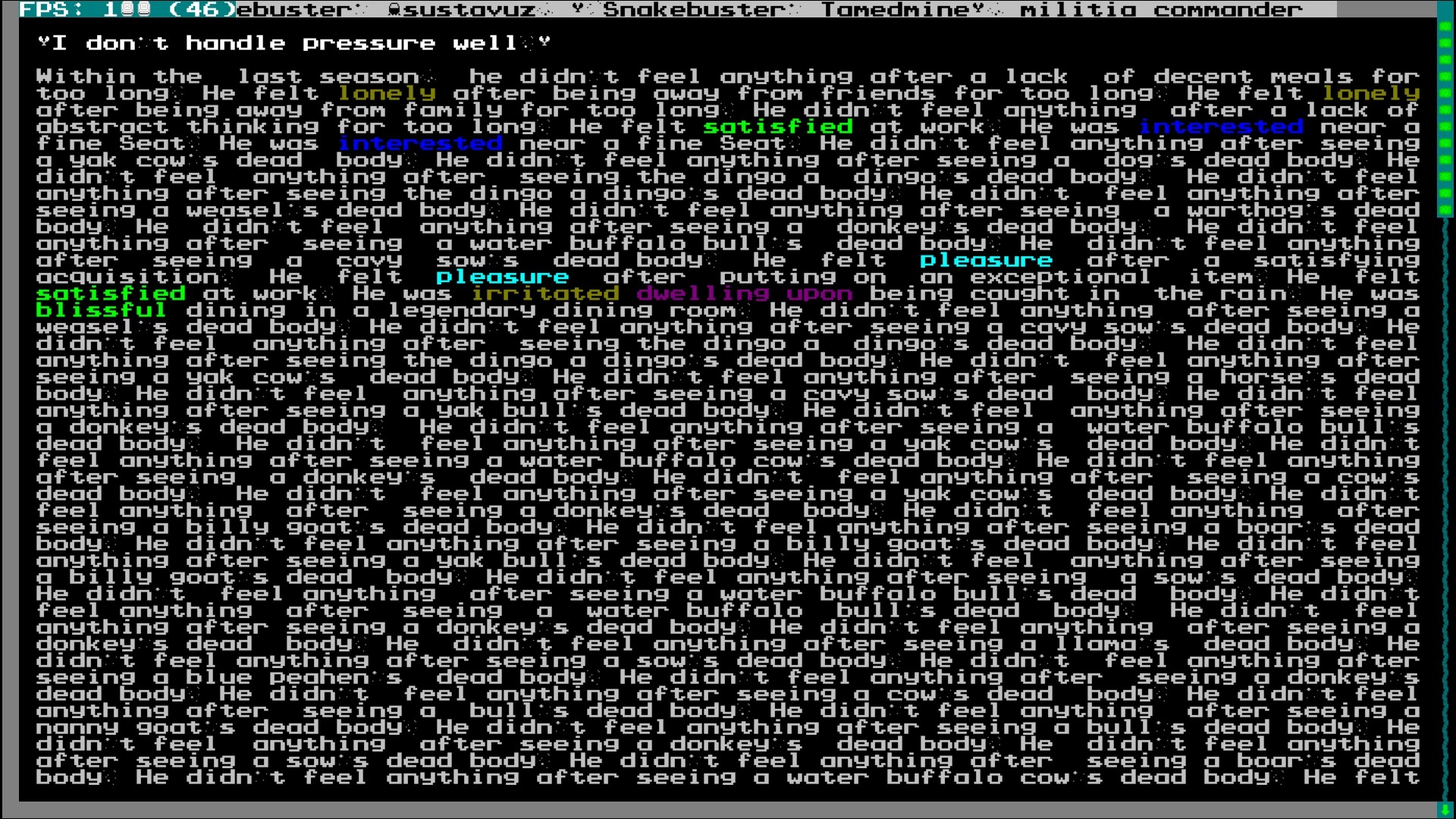 The list of corpses Id feels nothing about continues for another two pages. He’s… hardened.

What next for the Basement of Curiosity?

Phew! Thanks for reading all this time, folks. When I started this nearly-weekly series at the beginning of the year, I had no idea that it’d run until August, or that I’d end up doing it as part of my job. Thanks so much for supporting it <3

Next week, I’m going to be putting up an index post with an overall summary of the series, and a link to each of the episodes so far, as a sort of jumping-in point for new readers, and after that the series is on a break til September.

But that’s not going to be empty space! At the end of this month, I’m off to Seattle to represent Rock Paper Shotgun at PAX West. I’ll be giving game designers impossible challenges, witnessing a genuine Roman Ghost, duelling artists in MS Paint, discovering the erotique world of vampires, and giving a comprehensive lecture on the history of Jason Statham in videogames.

But most importantly, I’m going to be meeting up with Tarn Adams, the co-creator of DF, and Victoria Tran of Kitfox Games, who are adapting DF for Steam, in order to interview them on the game – and play a fortress – live on stage. It’s an opportunity I can’t believe I have, and I’m well pumped for it.

Thanks again for reading the Basement Of Curiosity so far, and I’ll see you next week.