Previously on Hounded Out: Outraged by a fence, I abandon my post as the town’s resident Wynonna Earp, gather my dogs, and head North, away from the cursed settlement.

We didn’t get far. However nomadic you are, Minecraft is simply too dangerous at night to travel for long.

The others – the townies – had settled the starting area. A jumble of forest, hills, lakes and the now poorly named Shinshatter Shaft. It had everything, but it still didn’t feel right. Perhaps I’ll know home when I see it, I thought. Perhaps I’ll never settle. For now though, the dogs and I needed a place to stay and gather supplies before pressing further North. A place that isn’t covered in fences and blinding torchlight. 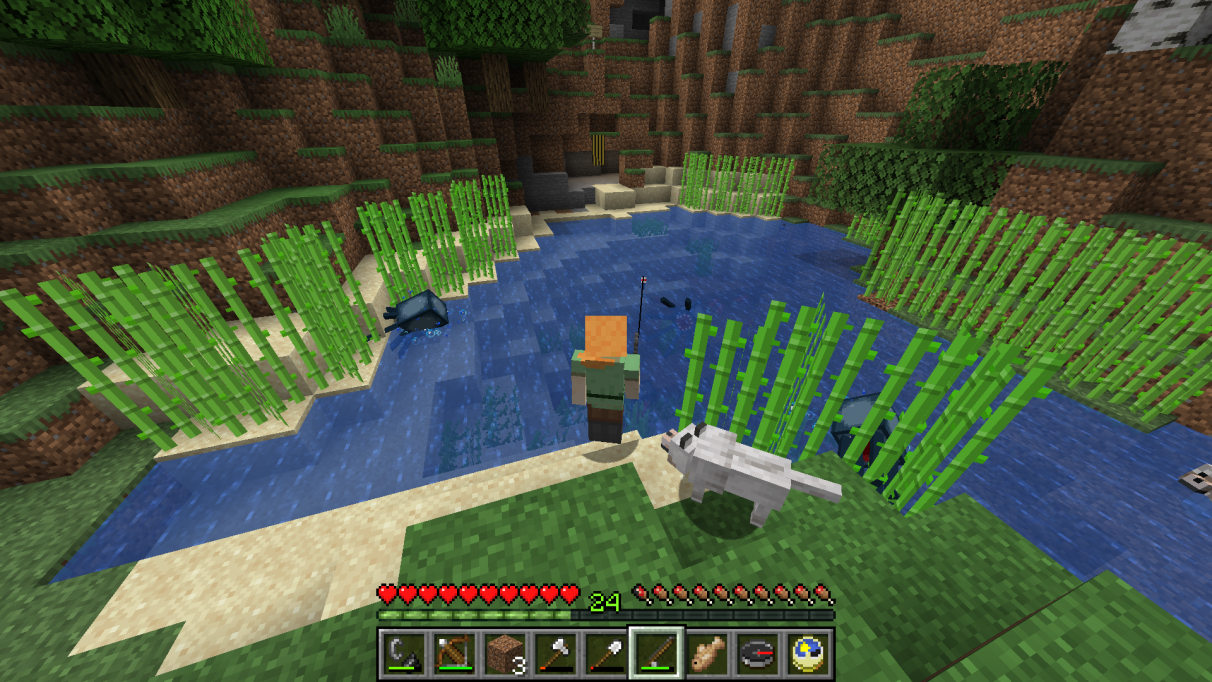 Along the way I found this lovely spot. I experimentally punched some salmon (they dislike it), and rescued squidses from suffocating when they constantly beached themselves. Sugar cane ringed the pool, and a cave sat opposite. This should stay. This in particular should stay. I put down signs marking it as a protected site, hoping others would appreciate its natural charm, and moved on.

Almost immediately, I found it. A small bump on a river bordering a forest. Nearby was a wide expanse of grassland, surrounded by winding sunken rivers and teeming with animals. This would do for now. I planted wheat and carrots, and dug a shelter underneath them.

I turned a few spruce into charcoal, the sustainable coal for surface folk, and planted the noble birch instead. Much of my crops became food for the sheep, cows, and chickens who grazed a short walk East and West. They’re happier free-range, wandering about this idyllic mini-island, just like me. I spent many days peacefully strolling about, picking flowers, gathering eggs and wool, and repeatedly wussing out of slaughtering the cows for leather when they looked up at me with their big dopey cow eyes. Signs went up imploring visitors not to harm them. The dogs chased hapless skeletons out from under their daytime shelters. A zombie attacked while clutching a potato. I took up night fishing, while food roasted on the campfire. Even the nights were often peaceful, although we were troubled by the occasional marauder. The dogs produced a tiny puppy with a comically large head. I could keep doing this. 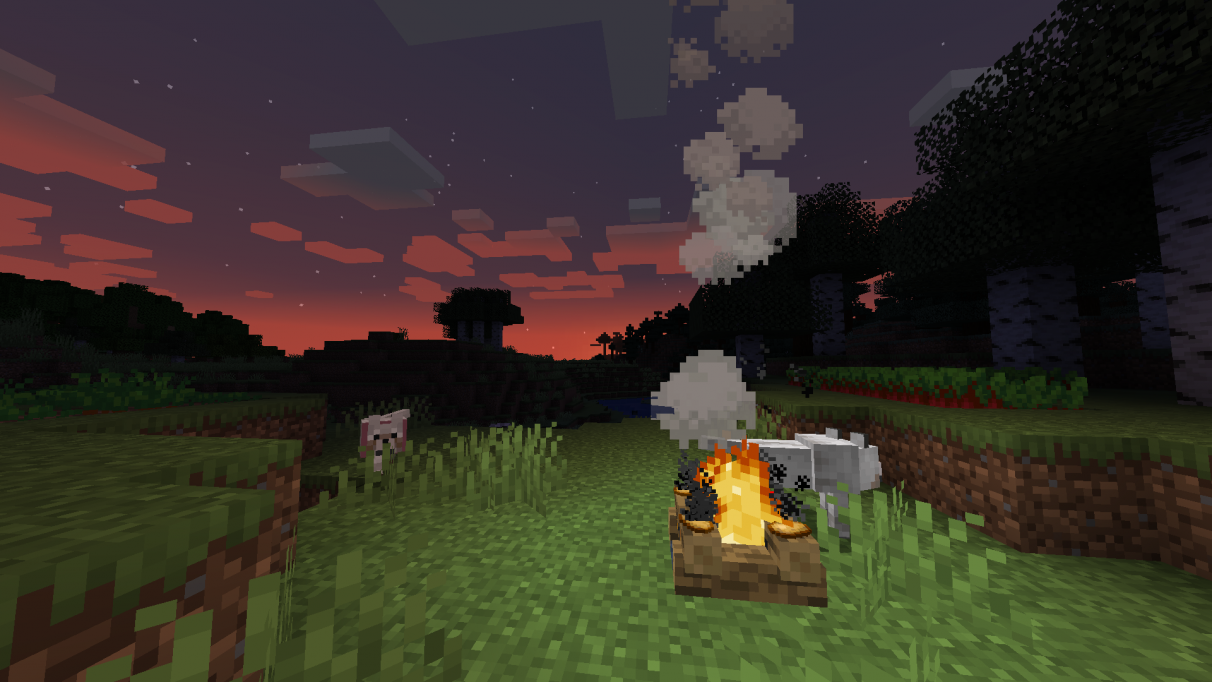 Should’ve called the dog on the right “Ymelda”

That cave was calling me, though. Eventually I ca– I relented and explored it to one of its many ends and, after a little digging, I broke into a tunnel full of terrifying baby zombies. I was shaken, and had to resurface. One of the townies (RPS chum Natalie Clayton) joined me on a second trip, leading to an exploration of this network of abandoned mines. It was enormous, full of monsters and confusing shafts and tunnels, and the most awe-inspiring: A wooden bridge over a truly massive underground canyon that made Shinshatter Shaft look like a dwarf’s bumcrack. Far, far down was a glowing river of lava; a clean, straight cut through the rock stretching off beyond eyesight in both directions. Gems and gold and tantalising corridors dotted the lower levels. We stumbled into a nest of venomous spiders. Creepers exploded, a skeleton tried a hilarious drive by then fled from Honcho and Cape without breaking stride. A shadowlad scurried about in the middle, taking neither side. I took too many bites and fled in a panic, dying walled up in a dead-end. I woke up at the farm with one thought: My dogs. My dogs are still down there. 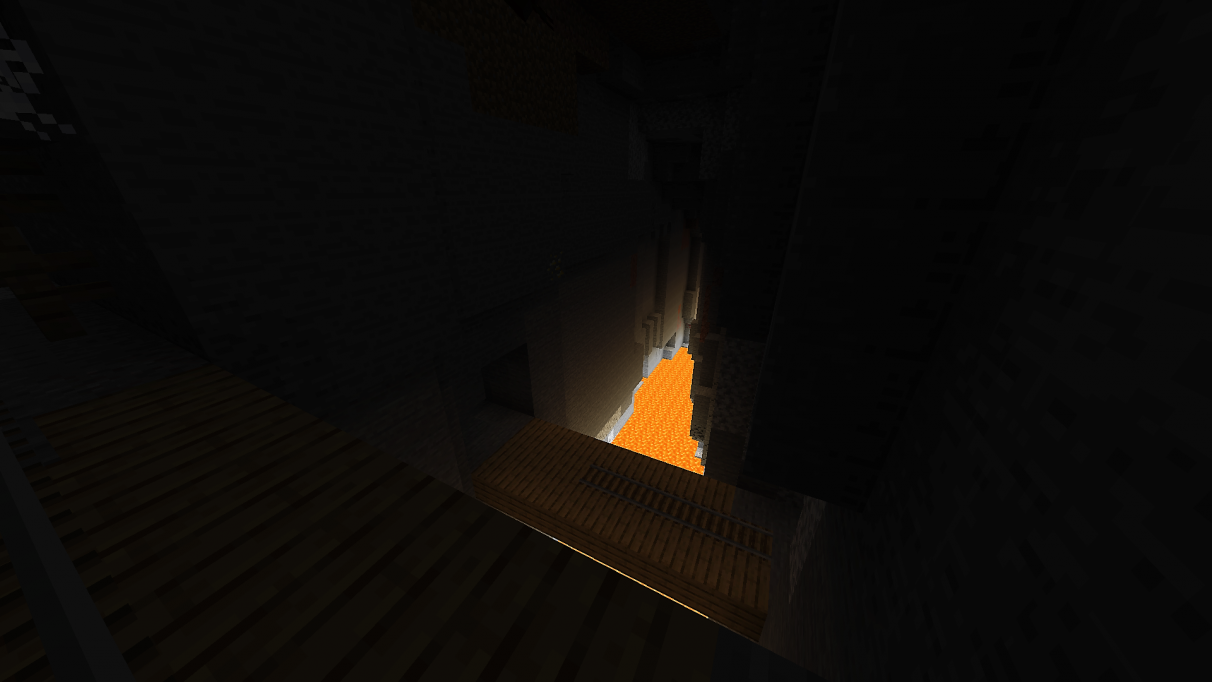 By the time I got back, hefting a fresh stone axe and screaming for revenge very much like this guy, Natalie had destroyed the nest. I got hopelessly, completely lost trying to reunite the scattered dogs. I blundered around for days, listening out for distant barks, chomping on baked potatoes and carrots. At the end I emerged with blinking eyes, a supply of iron, gold, azure gems, and a handful of beetroot seeds I could not account for. The young pup proved heroic in the fight against the spider menace, diving into the gluey strands and gnashing the legs off many a skittering cave horror, earning herself the name Cobweb.

It was utterly brilliant. But being killed always demoralises me. I’d planned to, y’know, not die. It rather takes the edge off things.

We headed home, and added pigs and wild pumpkins to the farm’s features. I was happy to potter here for a few seasons, until Nate sent a message: the town needs food. Naturally, I had a tonne spare, and offered to bring it over “If only all you starving people lived next door to, oh, I don’t know, a farmer” I suggested, maturely and helpfully, and not at all like an annoying, flint-obsessed weirdo. Then I heard a series of deathly screams. 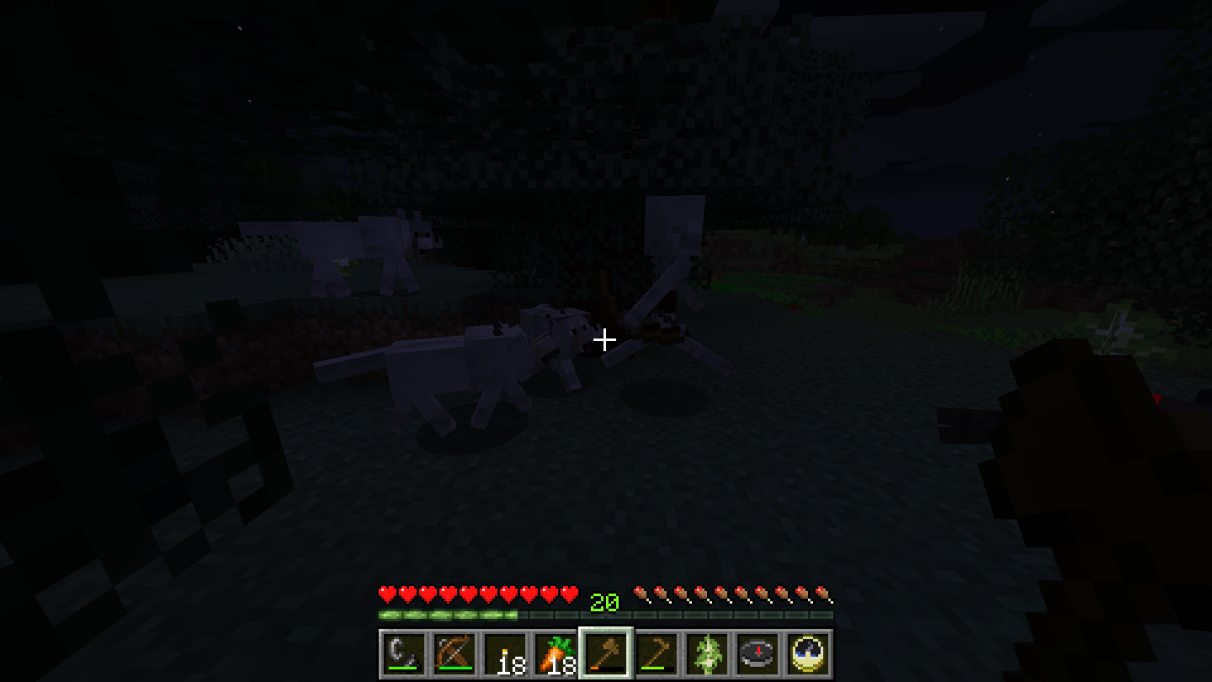 People were dying. Over and over again, Nate in particular was butchered by a grab bag of monsters. Nobody responded to my enquiries – clearly it was too frantic to type. I grabbed the dogs and ran all the way to town, through the doorway they’d cut into the hill behind my old shelter. Down a deep, deep staircase was an oaken hall. Signs and boxes and ornaments abounded, but beyond there, the townies had broken into a subterranean chasm, and were fighting… everything. Gleaming armour and swords swung in panic. Zombies and bone-waving ogres marched. Creepers detonated in succession, tearing a hole in the stone in which landed a … a witch?

The dogs knew what to do. They chased off the sniping skeletons while I tackled zombies and shot the witch. Something poisonous was thrown at me. Cobweb dove into a waterfall after an ogre and almost drowned. Nate ran in front of my crossbow and caught a bolt. It was rough. Nobody had words. By the end of it I was almost dead. Honcho was trapped, damn nearly ripped in half from fighting the witch in an exploding pit. I’d left all my food on the surface, and while resting behind a mess of broken stone and earth, I cried out for the surviving townies to bring us some of the food, some of our own food, that we brought here to save them. Nobody responded.

If a single dog dies helping these bastards I am going to torch this entire town. 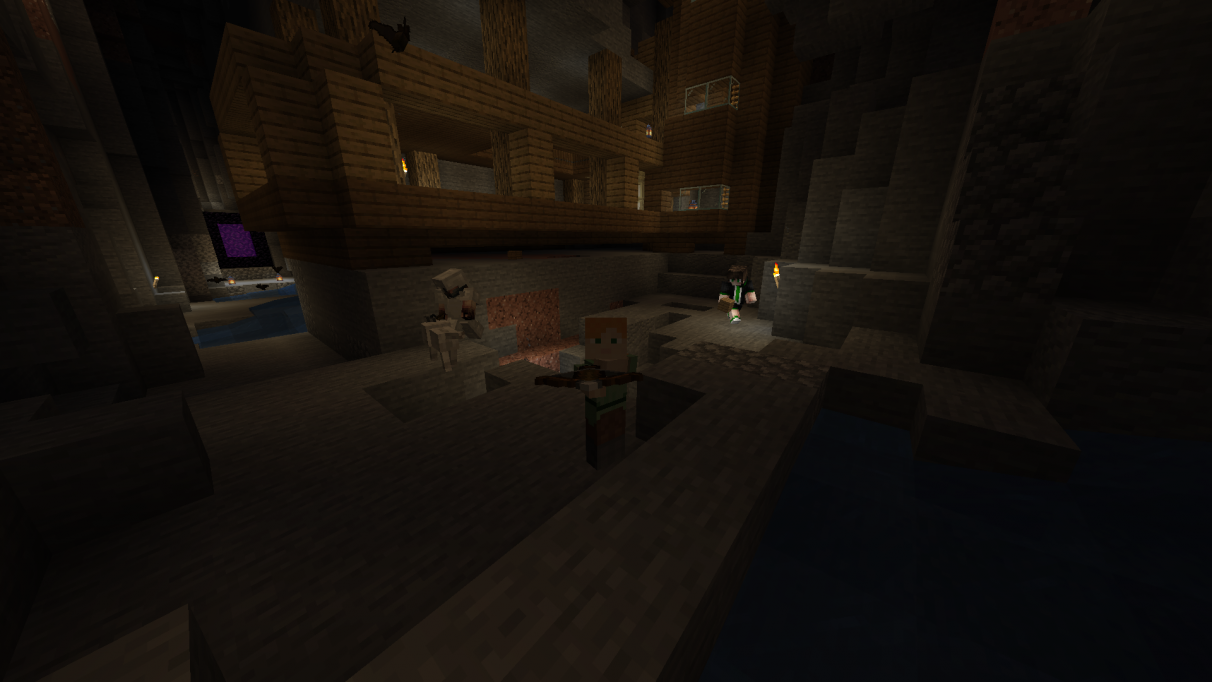 A few minutes after the battle. Not pictured: many monsters, 9 copies of Nate’s mangled corpse.

So I got us out of there, and quickly returned to the surface. Not knowing what else to do, I set up a couple of PO boxes we could swap supplies in, then sheltered from the rain under a tree. It’s oddly cozy.

By dawn, still nobody had responded, and a pair of creepers had blown up the supplies. The dogs stared up at me, and once again their message was clear: this is not our path. Our way is not mines and contraptions and the horrors of the underworld. I took us back to Birchbark farm, and made preparations to move on, as we were supposed to, before the cursed town’s mad ambitions caught up with us. While feeding the chickens, I looked to the mountain in the West, and confirmed my fears. 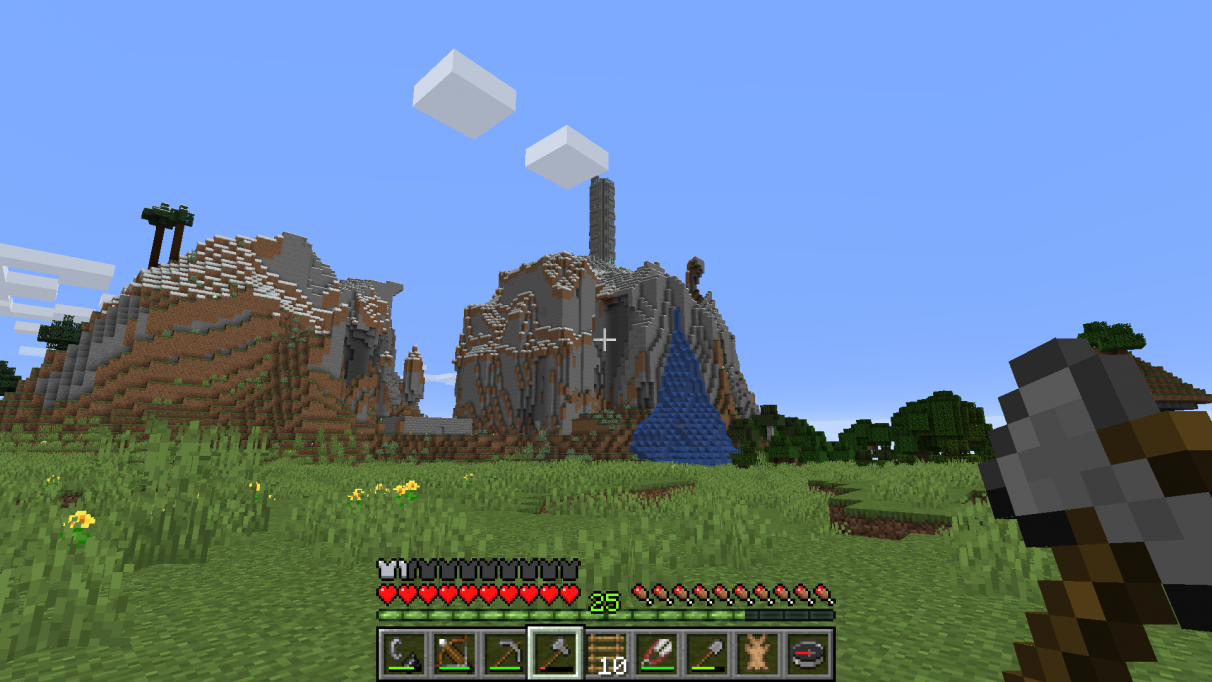 Next time on Hounded Out: Raising the Village of Lies, and the Path of the Fourth Dog.