If you thought Nvidia’s G-Sync Ultimate monitors were a bit bonkers, then you better brace yourself for what Alienware’s just beamed in for this year’s Gamescom. Introducing the AW5520QF, the world’s first 55in OLED gaming monitor. Because why the heck not?

Arriving on September 30 for a cool £3200 / $4000 (excuse me a second while I rearrange my jaw that’s just smacked onto my desk), the AW5520QF is effectively another TV-like gaming monitor for your living room. I’ve looked at a couple before, such as the significantly cheaper 43in Philips 436M6VBPAB (which is currently one of our top best gaming monitor picks for those after an excellent 4K gaming screen) and significantly more expensive HP Omen X Emperium G-Sync Ultimate display, but Alienware’s massive screen looks a lot more attractive than either of these TV replacements, mostly because of that lovely OLED screen.

You may remember me going a bit ga-ga for the OLED display in their Alienware 13 laptop a while ago, and holy moly was that a gorgeous display. I mean, OLED displays are gorgeous in general, what with their high colour accuracy, ultra deep blacks and ludicrously high contrast ratios, but a 55in one with a 4K resolution and a 120Hz refresh rate that’s also ultra slim like a proper telly? Consider my interest piqued. 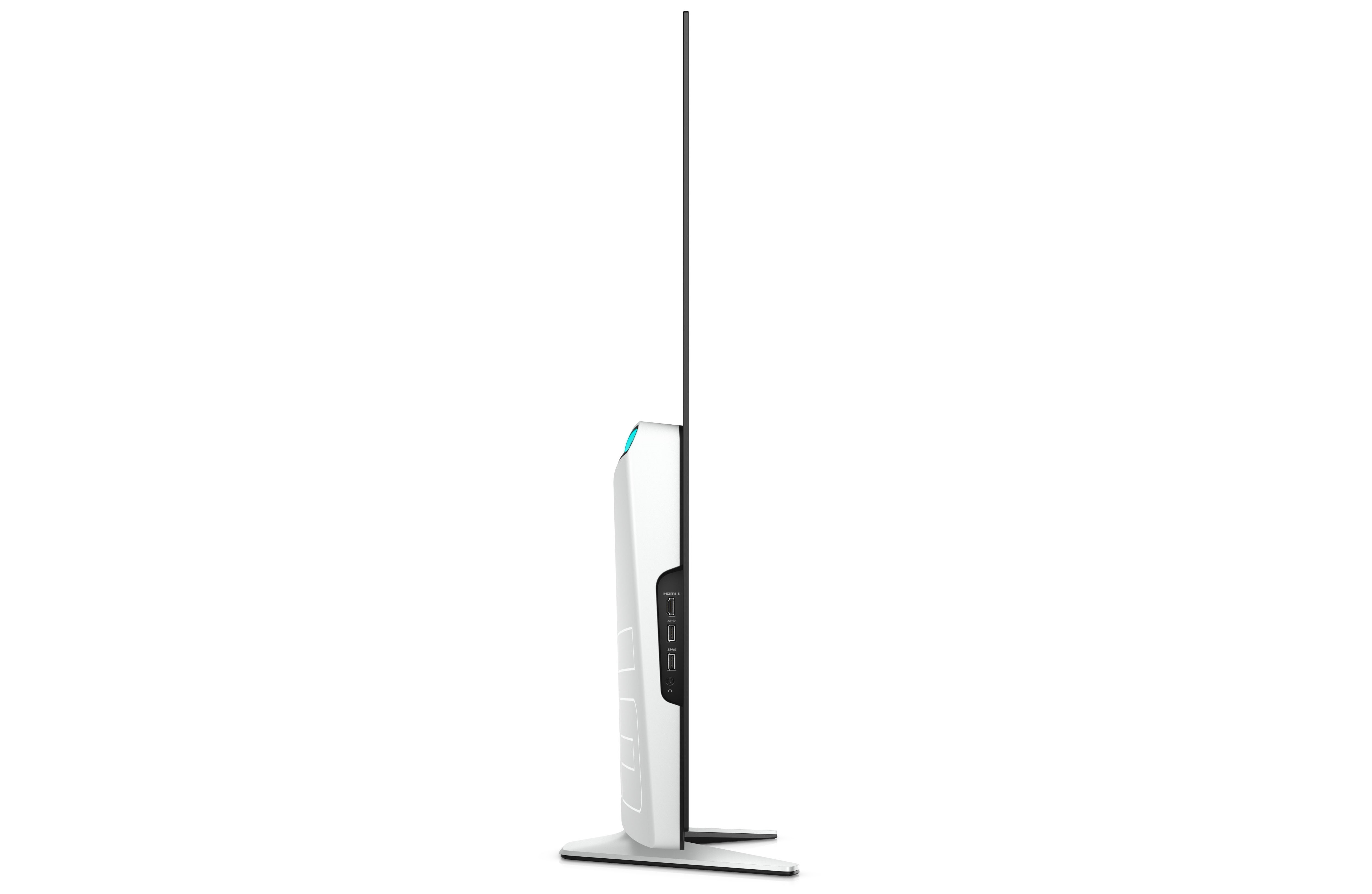 Like a lot of OLED TVs, the AW5520QF is chunky at the bottom, but the panel itself is lovely and thin.

Alienware say the AW5520QF’s OLED panel will also be able to show 98.5% of the HDR-grade DCI-P3 colour gamut, which is a lot higher than Nvidia’s G-Sync Ultimate requirement of just 90%, and it should mean that colours really pop out of the screen. The only potential downside (apart from its price)? It’s a FreeSync screen, not a G-Sync one, so anyone with an Nvidia graphics card in their PC may well find its variable refresh rate support may not be quite as good as proper G-Sync or G-Sync Compatible monitors. That’s not to say it won’t work with Nvidia graphics cards at all, of course – Nvidia’s G-Sync (small ‘c’) compatible driver should take care of that – but until I can test it myself, or Nvidia give it proper G-Sync (capital ‘C’) Compatible status, I’d hold fire on clicking that pre-order button.

I’m also a little worried about its claimed peak brightness of 400cd/m2. After all, if OLED screens have a single weakness compared to their regular LED rivals, it’s brightness. I mean, 400cd/m2 is usually absolutely fine on a normal gaming monitor, but it obviously won’t be much good if you have to close the curtains every time you want to play games in your living room, for example. Still, at least it comes with a remote control for fiddling about with its onboard menu, and you can VESA mount it on the wall as well.