It’s amazing how quickly you get back into a routine, even when you’ve been out of it a while. I got to play a bit of the Proving Grounds, one of Borderlands 3‘s endgame challenges where you run a timed gauntlet and try to survive waves of high-level enemies and/or kill them efficiently. It was like putting on a big explodey coat. Which is not necessarily what you want in a coat, but it tracks because some of the bigger, louder weapons do a lot of splash damage.

Avowed fans of Gearbox’s first-person looter shooter may feel like they’ve been waiting a while for Borderlands 3, especially in a word full of annual releases. But Paul Sage, the creative director, explained to me that early work began on Borderlands 3 four years ago, before he even arrived at the studio. It has been in what he called “hardcore development” for about three years now.

Those fans will, hopefully, notice some changes. This time they’re striving to make the guns (of which the Borderlands series has always had, well, a lot) feel actually different this time. Sage told me that a lot of the differences in the first two Borderlandses felt like they just came down to numbers.

“People who really like to min-max, they understand: Hyperion guns, they get more accurate the more you fire them,” he said, but observed that a lot of people aren’t trying to do equations during games, and need something more apparent. So adding shields onto a Hyperion gun makes it stand out at a glance.

“Now what happens? Do those shields absorb damage, or do they absorb bullets, and therefore put a bullet in your chamber? It’s like, why not both?”

Sage also described E-Tech guns, alien weapons with “these cool alien growths” on the barrel, which are more beam-oriented.

“There’s a beam that when you hit a target, the beam gets split and goes to other targets,” he said, with professional savoury. “Yes, I really like that particular weapon.”

Four-player online shooting expeditions and two-player couch co-op are returning, which everyone at Gearbox characterises as super important for the game. New for this one, though, is level scaling that lets you play more happily with your high-level friends, and loot instancing, giving you level-appropriate loot from those sessions.

As is expected, there are new player characters, vault hunters, to choose from. Each has three quite distinct ability trees you can pursue, and which I did find gave very different flavours. I played as Amara, the siren, whose special ability summoned huge disembodied fists to pummell my insectoid enemies, and I specced to have self-healing and boosts to hit points. My favourite, though, was FL4K the beastmaster. They were my favourite because they are accompanied by a large and fearsome pet that they talk to and encourage during battle.

Sage protested that asking him his favourite was like Sophie’s Choice, but did say that Moze, the soldier character, was locked-in first. 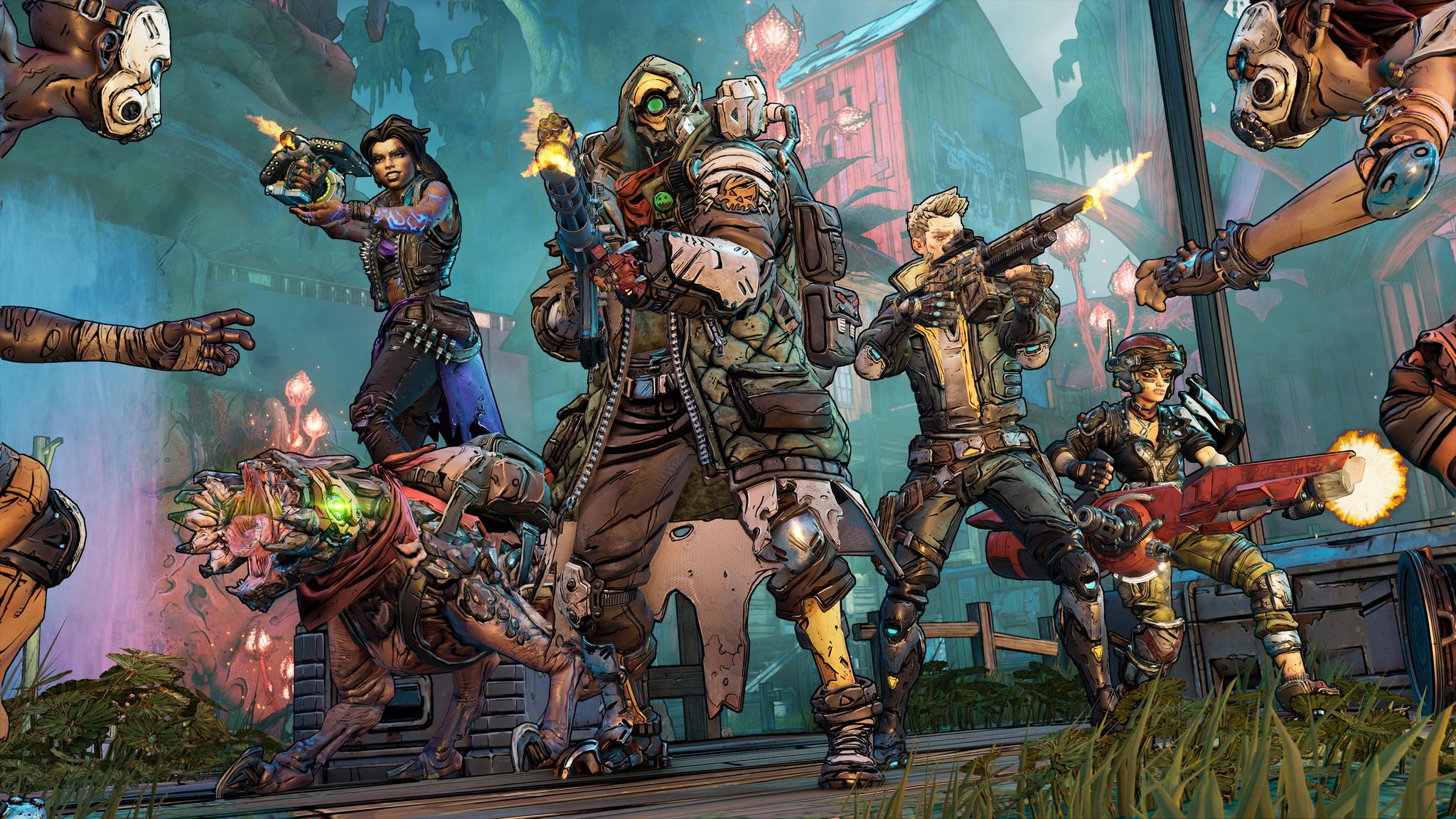 “Basically, we, on the development team, were like, ‘Well, what’s better than a turret?’ It’s like, ‘Getting in and driving around the turret.’” Sage explained. “But the team is like, ‘Wait, you want to do what? You want a mech?’”

The creation of Moze’s mech, Iron Bear, meant they had to change a bunch of assets in the game, notably doors, to make sure it could all be traversed in a big ol’ metal monster suit.

But aside from the guns, and the vault hunters, probably the third tentpole that holds up the Borderlands big top is humour, which Sage described as “genuine irreverance”. Humour without keeping one hand on the human always falls flat. He told me that good humour to him is “always a matter of, how truthful was it? How much did that hurt to say, at some level?” Part of the success of the humour in Borderlands comes from the fact that they, as creators, genuinely care about the characters they’ve made, and know how they’d react in certain situations.

“You can’t force it. You absolutely cannot. But you do need it. The humour is the -” and here he broke off and laughed, with possibly a perfect example of what he was trying to explain, ” – I almost said the Xanax for tension.”

Shooters, he explained, thrive off tension, and the humour provides a moment of catharsis. This is possibly why Borderlands has attracted a lot of genuine fans over the years, the kind who cosplay and make phone charms of Handsome Jack. Compared to other shooters without humour, it provides pacing, and a wink-wink-nudge-nudge shared between developer and player.

But because it’s been a while, there are going to be players for whom Borderlands 3 is their first Borderlands game. Are Gearbox thinking about them too? Sage answered that with a very emphatic “every step of the way.” In story-focused meetings the first question is always something like, but what if they don’t know who Lilith is? What if they don’t care?

They’re working, he said, to have enough of the familiar, balanced with enough background to make sure new players aren’t left out. Even Claptrap, the little rhomboid robot who’s so annoying you hate him but love him but sort of hate him, was looked at from a newcomer’s perspective. It was: “Okay, they might not know who Claptrap is, he has to be very Claptrap right away so they get that introduction.”

The possibility of Claptrap being very Claptrap will mean different things to different people. He is, to be fair, emblematic of the this-one-goes-to-11 attitude of Borderlands. But there are subtleties to Borderlands 3 that Sage says he almost hopes nobody notices.

“There’s individual sounds on guns, that are completely unique to those guns, that nobody should ever pick out or hear,” he said, noting that all the hard work of the audio team will mean players will just like the sound of the guns. Maps are filled with more interesting things to find, so running a distance doesn’t feel just like running a distance. Elemental damage types now affect bodies of water. “I don’t know if they’ll ever be called out, and I kind of hope they’re not,” he said. “Just because I hope people are like, ‘This feels good.’”