On paper, the AsRock X570 Taichi sounds like a well-equipped X570 motherboard. All three of its PCIe x16 slots support the new, super fast PCIe 4.0 standard, as do its trio of M.2 NVMe SSD ports. It also comes with its own screwdriver for easy assembly in the box, as well as multiple M.2 screws and standoffs, an SLI HB bridge and four SATA cables. And yet this £297 / $300 X570 mobo for AMD’s new Ryzen 3000 CPUs has one crucial flaw. Its heatsink cover can’t be detached from the main motherboard, making it nigh on impossible to use with the only PCIe 4.0 SSD available right now, the rather fat Gigabyte Aorus NVMe Gen4.

You could, of course, simply insert the Gigabyte without its chunky copper casing, but if I’ve spent almost £300 on this already very expensive SSD, then I damn well expect to be able to use it properly. As such, I wasn’t able to test how the Gigabyte performed with the AsRock X570 Taichi, because I didn’t want the motherboard’s own heatsink cover dangling loose inside my PC case. 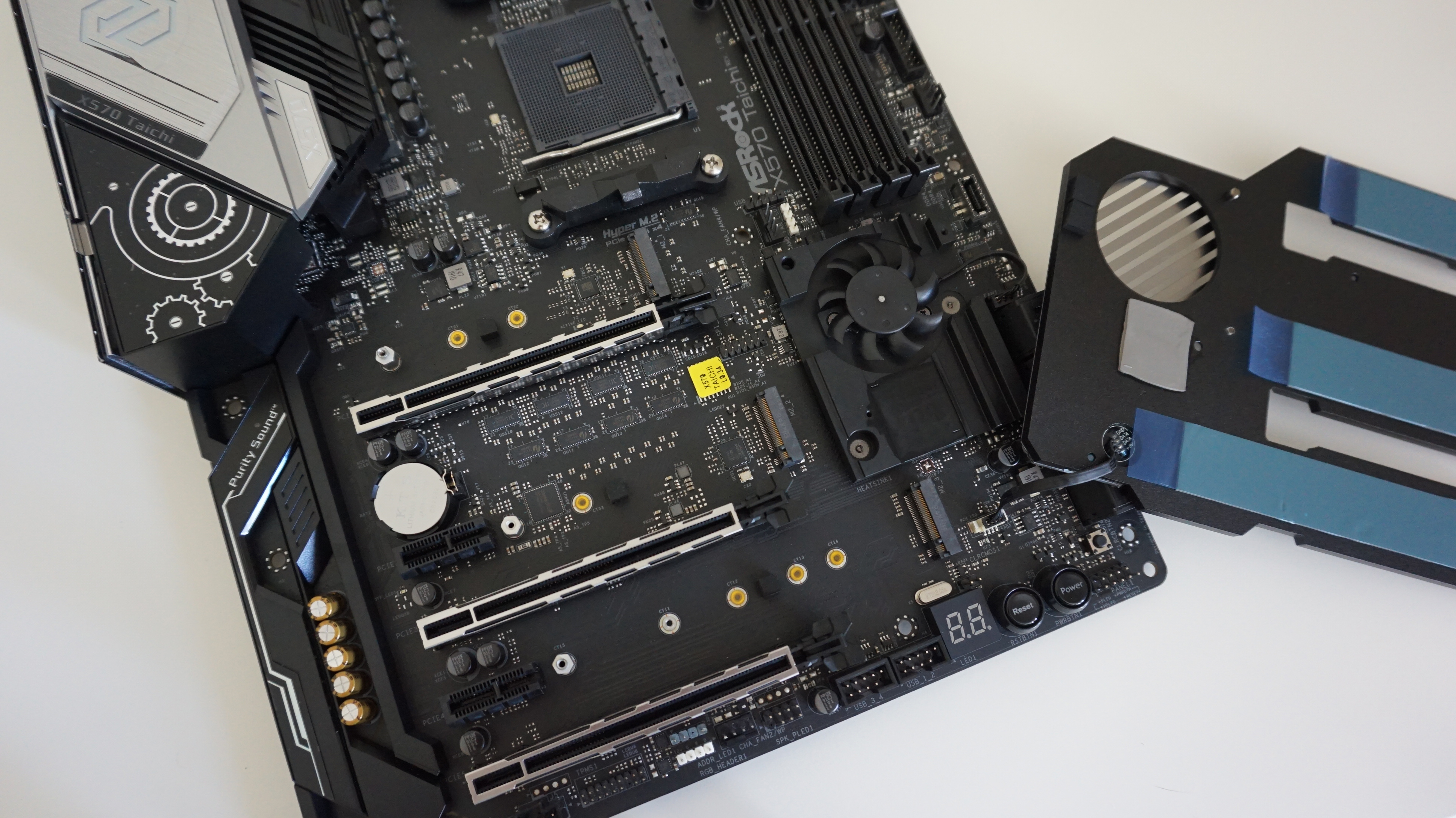 The Taichi isn’t very practical for SSDs that already have their own heatsink, as you can’t actually remove the heatsink cover that comes with it.

It did, at least, put in a pretty impressive performance when I tested it with my regular PCIe 3.0 SSD, the WD Black NVMe, producing the best random read and write speeds I’ve seen out of all the X570 boards I’ve tested so far. The former is only a couple of MB/s ahead of its competition, admittedly, coming in at 47.0MB/s, but the latter is streets ahead at 178.4MB/s, putting it a good 10MB/s in front of the considerably more expensive Asus ROG Crosshair VIII Hero (Wi-Fi) and Gigabyte X570 Aorus Master, and almost 30MB/s ahead of the slightly cheaper MSI X570 Gaming Edge.

I should also point out that the instruction manual does contain a handy list of all the SSDs the Taichi is, in fact, compatible with, but that doesn’t take away from the fact it’s still a bit of a gamble for anyone with an existing set of components they simply want to drop in and carry on using. 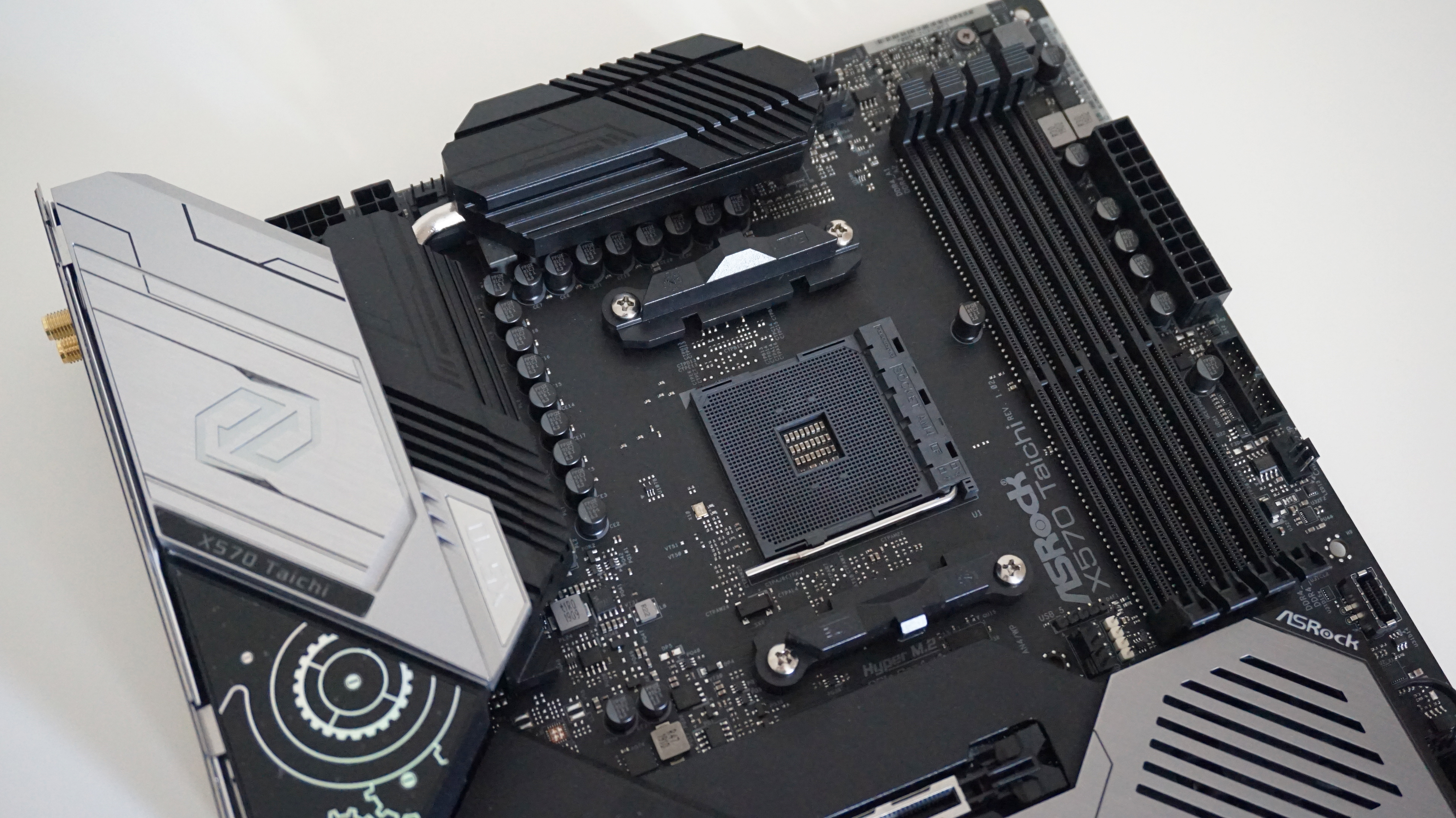 In truth, I wasn’t overly impressed with the AsRock X570 Taichi’s performance anyway. While its Geekbench 4.3 single core and multicore scores of 5083 and 32,328 were pretty much in line with the rest of the X570 boards I’ve tested so far, its PCMark 10 desktop result was quite a bit slower. Here, the Taichi managed just 5692 overall, whereas the others were a good 1000 points ahead of it.

The AsRock X570 Taichi has a decent selection of USB 3.2 ports, including a USB-C port.

It also struggled to make much of an impact as a gaming motherboard, too. In Shadow of the Tomb Raider, for example, it produced the slowest average frame rate when I put it through the game’s internal benchmark on Highest at 1080p with its TAA anti-aliasing enabled, finishing with 108fps. The other three boards, meanwhile, ranged between 109-111fps. The Taichi didn’t manage to close the gap when I moved up to 1440p, either, coming in with an average of 98fps compared to the 99-100fps results on the Asus, Gigabyte and MSI.

In its defence, it managed to pull it back a bit in Total War: Warhammer II, and when I put it through the game’s internal benchmark on Ultra at 1080p it beat the Gigabyte Aorus Master into third place with its average of 106fps. It also managed to equal the MSI and Asus when I moved up to 1440p, producing an equally nippy average of 94fps. 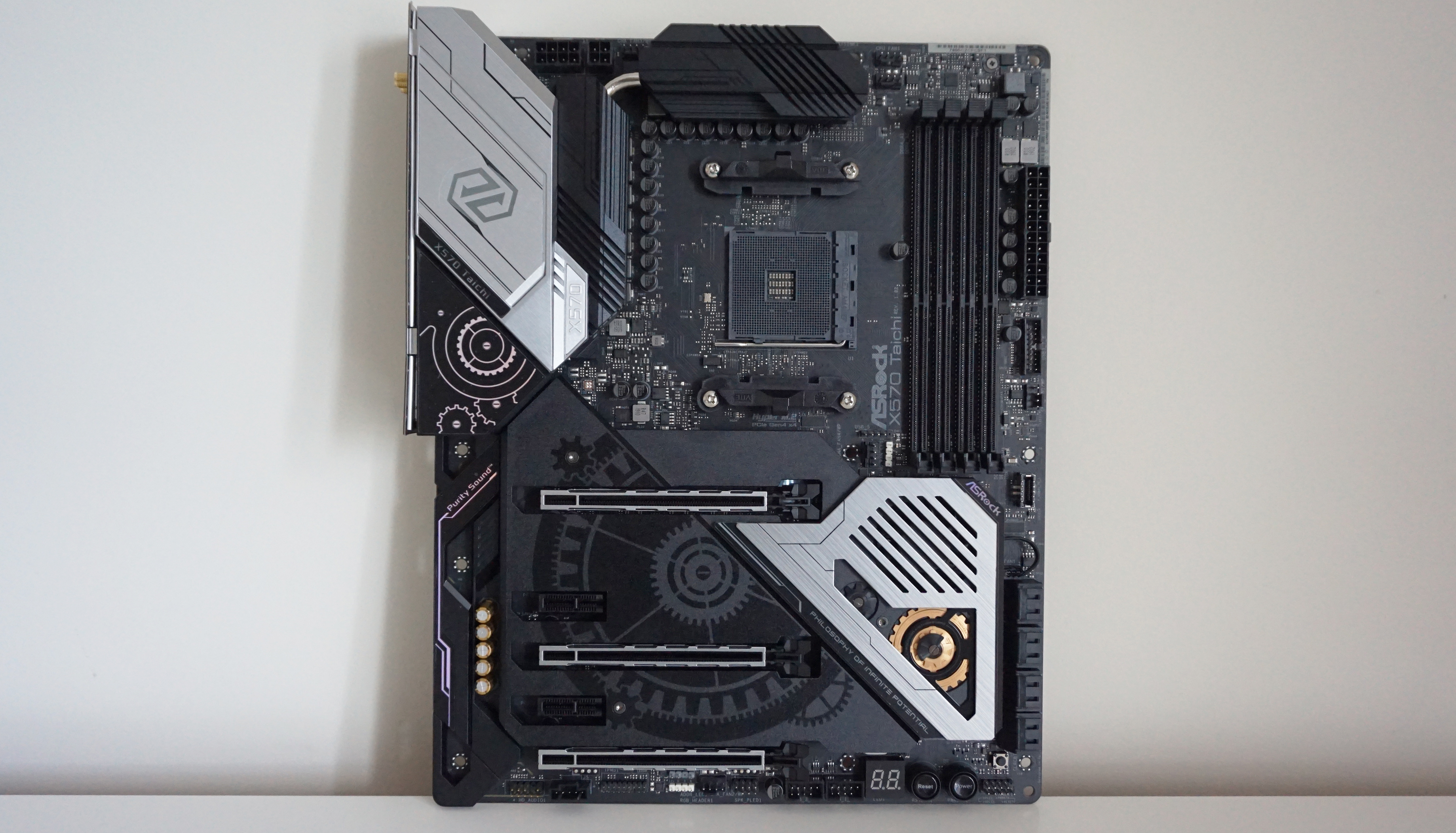 The Taichi did reasonably well in Assassin’s Creed Odyssey as well, producing an average of 76fps on Ultra High at 1080p, and 67fps on Ultra High at 1440p. This puts it just ahead of the cheaper MSI, and brings it more in line with the more expensive Asus and Gigabyte.

However, one good result isn’t enough to make the Taichi better value for money than the £220 / $210 MSI X570 Gaming Edge in my eyes, especially when its design makes it a bit of a faff to use. The MSI is also the superior motherboard for general desktop performance as well, so you might as well save that extra £100 / $100-odd you’d spend on the Taichi and put it towards getting a better graphics card or another SSD you can actually use properly.