If you’re thinking about buying one of AMD’s Ryzen 3000 CPUs, such as the excellent Ryzen 7 3700X, then you may want to think about pairing it with one of their new X570 motherboards. AMD’s Ryzen 3000 CPUs still work with older AM4 motherboards, of course, including those with X470 or B450 chipsets, but they may need a BIOS update before you can start using it (check our motherboard / CPU combo guide for more info), which isn’t the case for the out-of-the-box ready X570 boards. X570 boards also support the new super-fast PCIe 4.0 standard, which can chuck twice as much data around than their PCIe 3.0 predecessors – up to 64GB/s compared to 32GB/s.

That doesn’t mean much right now, admittedly, as there are still precious few PCIe 4.0 devices around to take advantage of all that extra speed. However, if you’re the type who likes to look ahead when building their PC, MSI’s MPG X570 Gaming Edge (Wi-Fi) motherboard is a great place to start.

The MSI Gaming Edge doesn’t come with as many USB ports as other X570 boards, but you still get a pretty decent selection of USB 3.2 ports, plus a USB-C port.

It also put in the best performance in PCMark 10’s general productivity benchmark, too, finishing with a score of 6640 overall. That’s a 17% increase over MSI’s older X470 Gaming M7 AC that I reviewed when AMD’s 2nd Gen Ryzen CPUs came out. 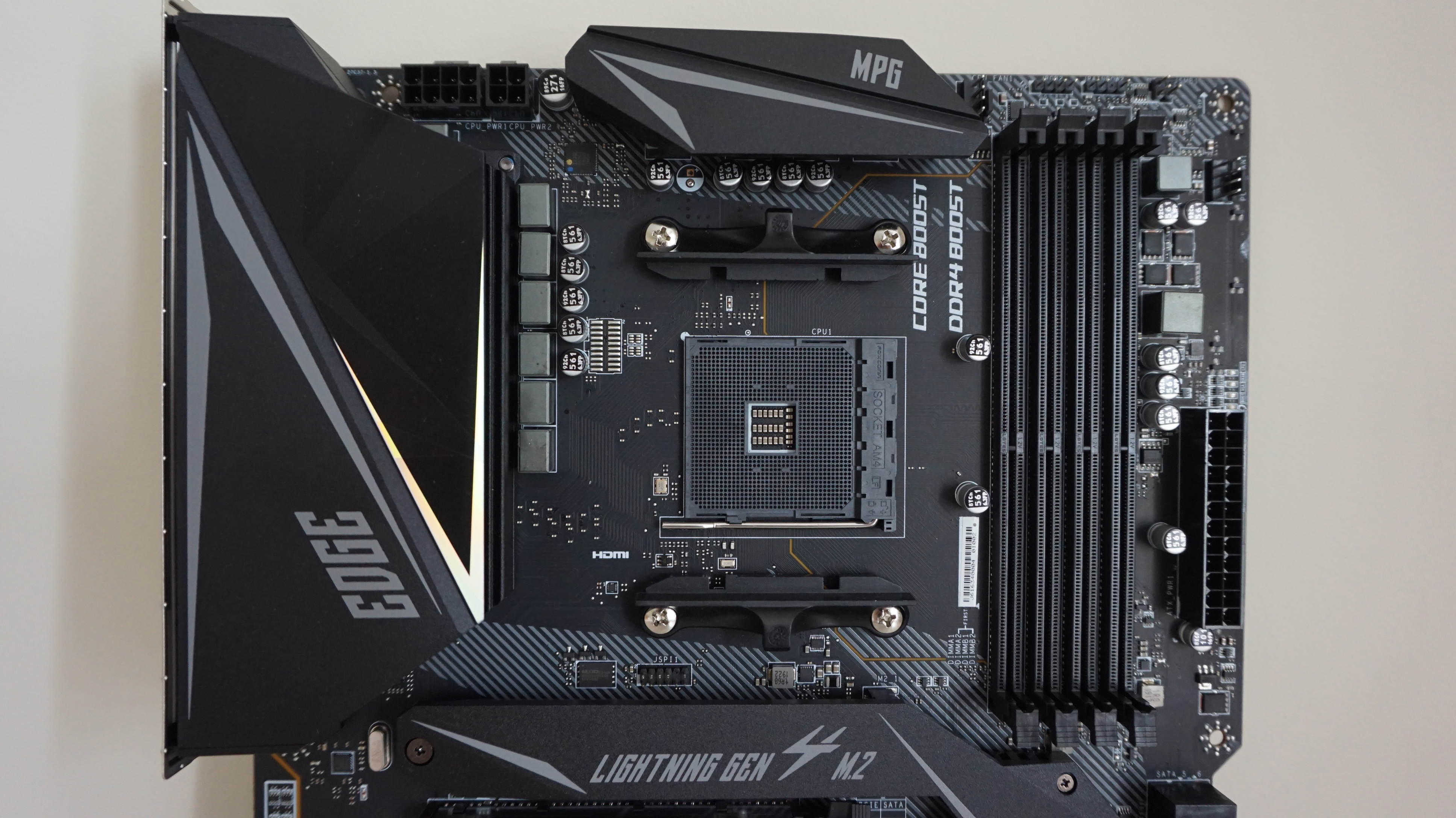 As for the X570 Gaming Edge’s gaming performance, this once again produced the nippiest speeds in my suite of test games. Admittedly, we’re only talking a difference of 1-3fps here in a lot of cases, but it shows you don’t need to spend almost £400 / $400 on an X570 motherboard to get the best speeds from your new CPU.

In Shadow of the Tomb Raider, for example, the MSI X570 Gaming Edge produced an average frame rate of 111fps in its internal benchmark on Highest at 1080p with its TAA anti-aliasing enabled, which just squeaks in front of the Gigabyte’s 110fps, the Asus’ 109fps and the AsRock’s 108fps. The MSI also had the edge at 1440p as well, as it was the only one able to stay in triple figures (100fps) when I ran the benchmark again with the same quality settings. The rest finished with averages between 98-99fps. 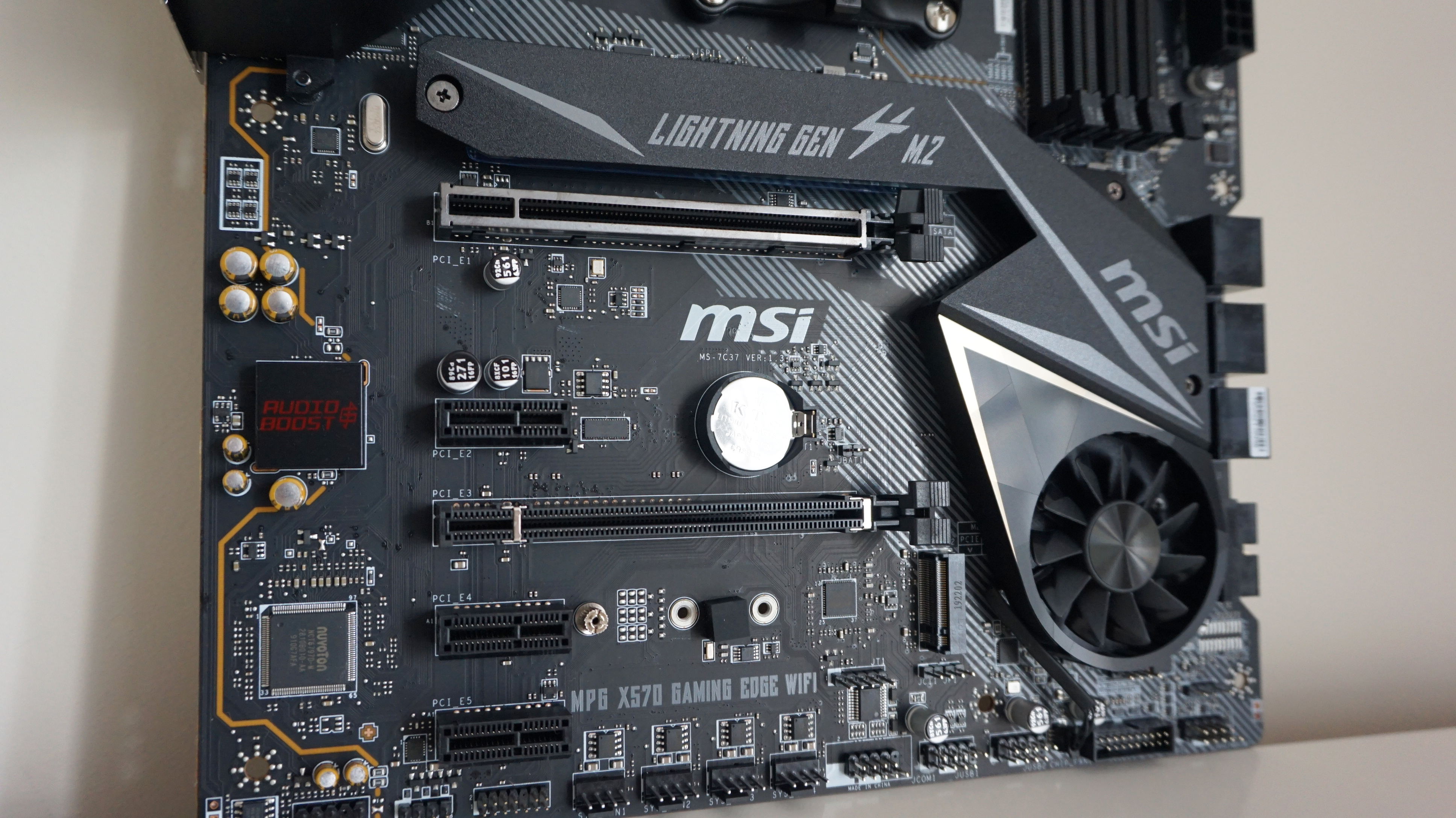 Both of the MSI X570 Gaming Edge’s PCIe x16 slots support the new, super-fast PCIe 4.0 standard, but only the top one runs at the full x16 speed. The second one runs at x4.

In fact, it was only Assassin’s Creed Odyssey where the MSI fell behind, finishing its internal benchmark with an average of 74fps as opposed to the 75-77fps scores achieved by the other three boards. However, considering it’s so much cheaper than the other lot, there’s hardly much to complain about in the grand scheme of things – especially when it hit an identical 66fps average to the Gigabyte when I raised the resolution to 1440p, which was only a single frame behind the Asus and AsRock. 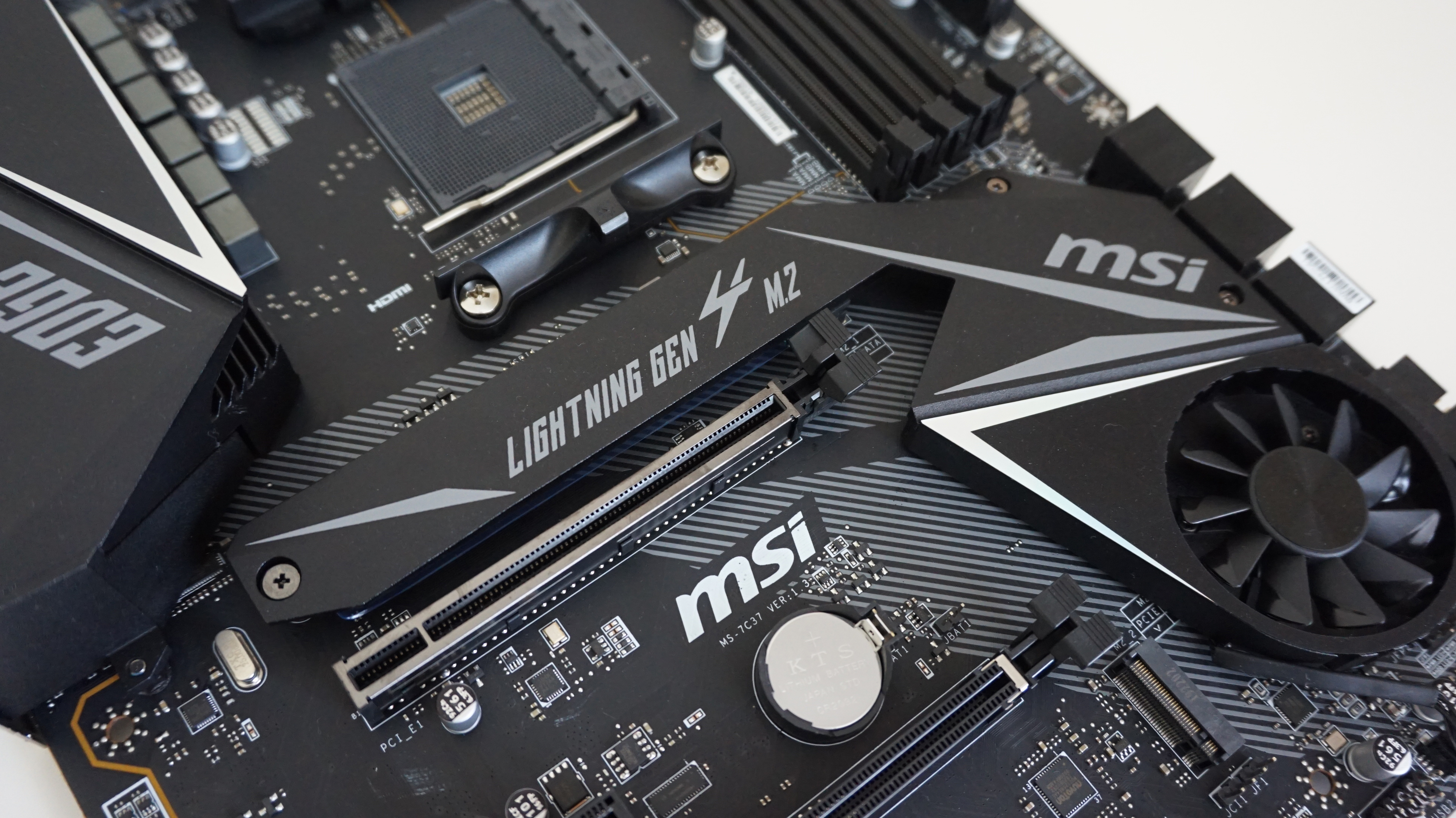 The MSI X570 Gaming Edge has two M.2 slots for NVMe SSDs, but only the top one (underneath the heatsink) supports the super-fast PCIe 4.0 standard.

As for SSD performance, I tested the MSI X570 Gaming Edge with both my standard PCIe 3.0 WD Black NVMe SSD as well as Gigabyte’s Aorus NVMe Gen4 SSD to see how it handled a PCIe 4.0 device. Starting with the WD, this was pretty much in line with the other three X570 boards I’ve tested, producing a random read speed of 45.6MB/s and a random write speed of 150.4MB/s. The latter is perhaps a bit slow compared to the competition, the fastest of which was able to reach 178.7MB/s, but once again I’m not too bothered by this considering its lower price.

Its PCIe 4.0 performance, however, was faster than Gigabyte’s Aorus Master board, and neck and neck with Asus’ Crosshair, coming in with 66.7MB/s random read and 162.1MB/s random write. As for the AsRock, I wasn’t actually able to fit the Gigabyte SSD onto that particular board, as its built-in heatsink panel didn’t leave enough room for it. Likewise, even if I’d removed the AsRock’s heatsink panel, I would have had to have left it dangling around inside my case due to the small cluster of wires attaching it to the main board, which is neither very practical or something you’d want to put up with long-term. 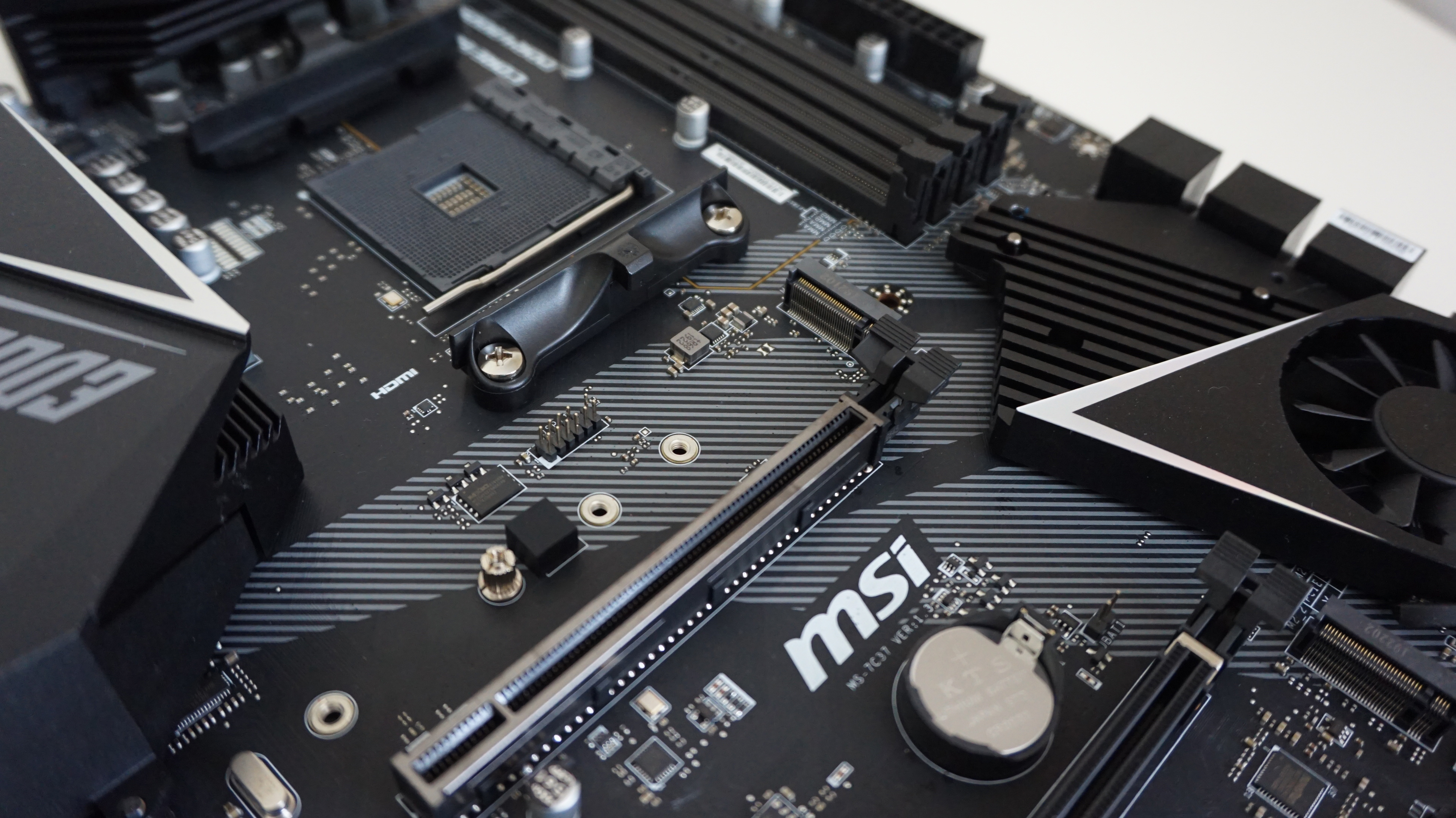 You’ll have to remove the heatsink to access the MSI X570 Gaming Edge’s PCIe 4.0-enabled M.2 slot, but at least the whole thing can be removed, unlike other X570 boards where it’s attached by a handful of wires.

All in all, then, the MSI X570 Gaming Edge looks like pretty good value at the moment, at least compared to the more expensive X570 boards I’ve tested so far. There are, admittedly, a couple of quality of life niggles I have with this board – it doesn’t come with a nice, smooth backplate, for example, nor does it come with a front panel connector doodad like its more expensive competition. You also only get two SATA cables, two M.2 screws (no stand-offs) and its Wi-Fi antenna included in the box, whereas other boards will get you a lot more.

However, when the MSI’s performance is either quicker or just as fast as those more upmarket boards, I’m more than happy to do without these little extras for the sake of saving myself a bit of cash. After all, why spend another £100 / $100 on an equally fast motherboard when you could be putting that toward a better graphics card, or another, larger SSD? 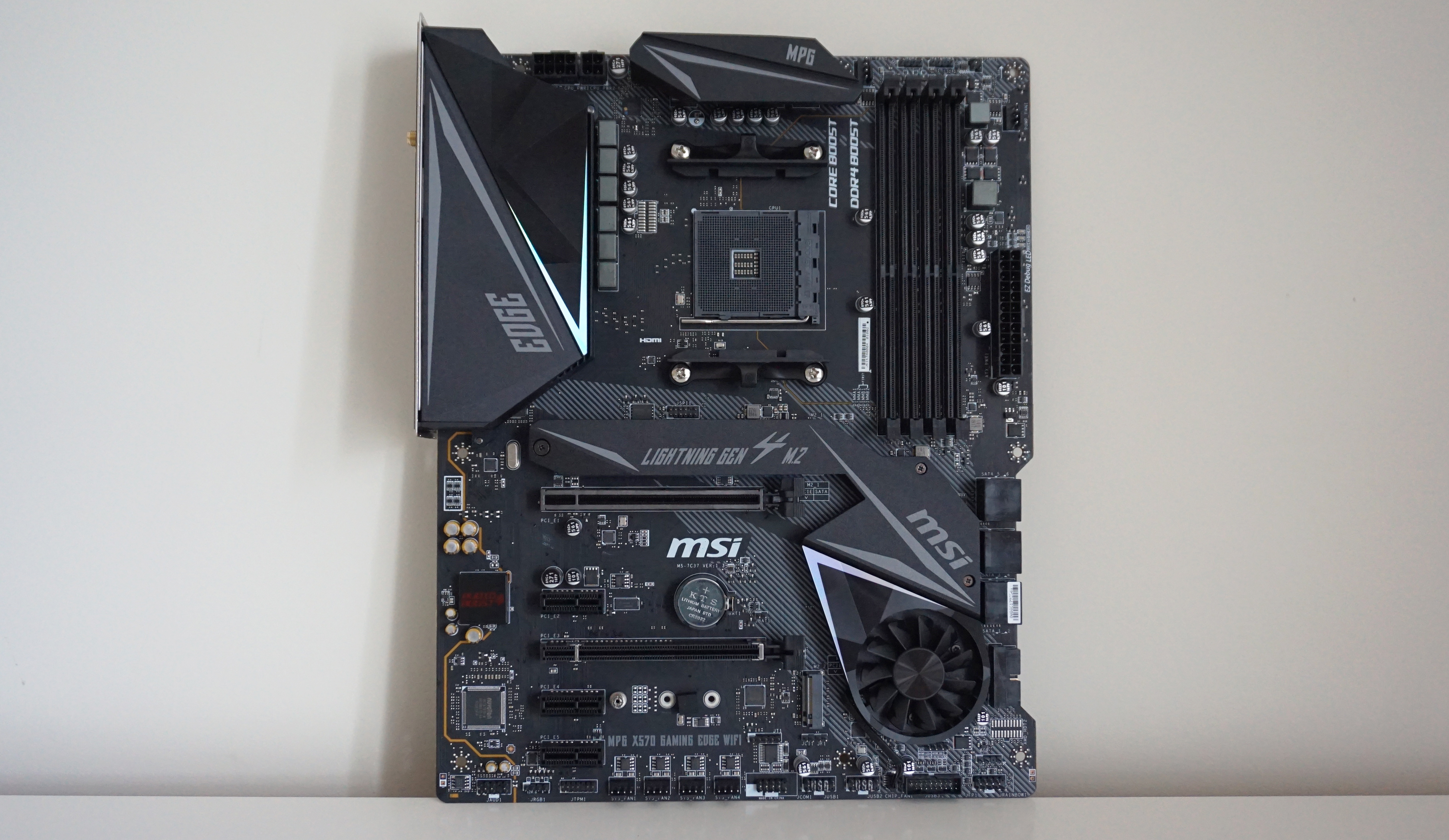 I’ll do my best to get more X570 motherboards in for testing as soon as I can, but for now, the MSI MPG X570 Gaming Edge (Wi-Fi) is a great foundation for anyone looking to get the most out of their new AMD Ryzen 3000 CPU without breaking the bank.