Now streaming live:
Hounded Out is a short diary about life on our Minecraft server, where nobody but Sin has any respect for the wilderness. This is the final entry.

Previously on Hounded Out: I have brought food, and have made peace with the townies. But after spending the night in the cursed place, my precious dog, Goat, has been taken to Hell.

I’d never been to Hell. It seems obvious, right?

I never go to hell because of course I don’t. Why would I want to? Spare me your “endgame” nonsense. My endgame is mapping the sea. It’s leaping from a mountain into a natural lake. It’s a purely decorative mine. It’s saving my goddamn dog.

I wasn’t sure how the portals worked, but nobody can prove I just tried to just walk through it and fell off the path. My fear that I’d need some blood or a haunted egg or some other tedious nonsense was unfounded – a simple poke does it. I readied myself. This was the first step, the easiest foot forward in a surely harrowing journey through the realm of the damned. I had only my simple stone tools and crossbow, and hopefully enough food. Through lakes of fire and gauntlets of eternal horrors I would journey, and fight if necessary, surely tainting my very soul, but slowing not a moment. Though it may take days, weeks, or even a lifetime, I would journey th- 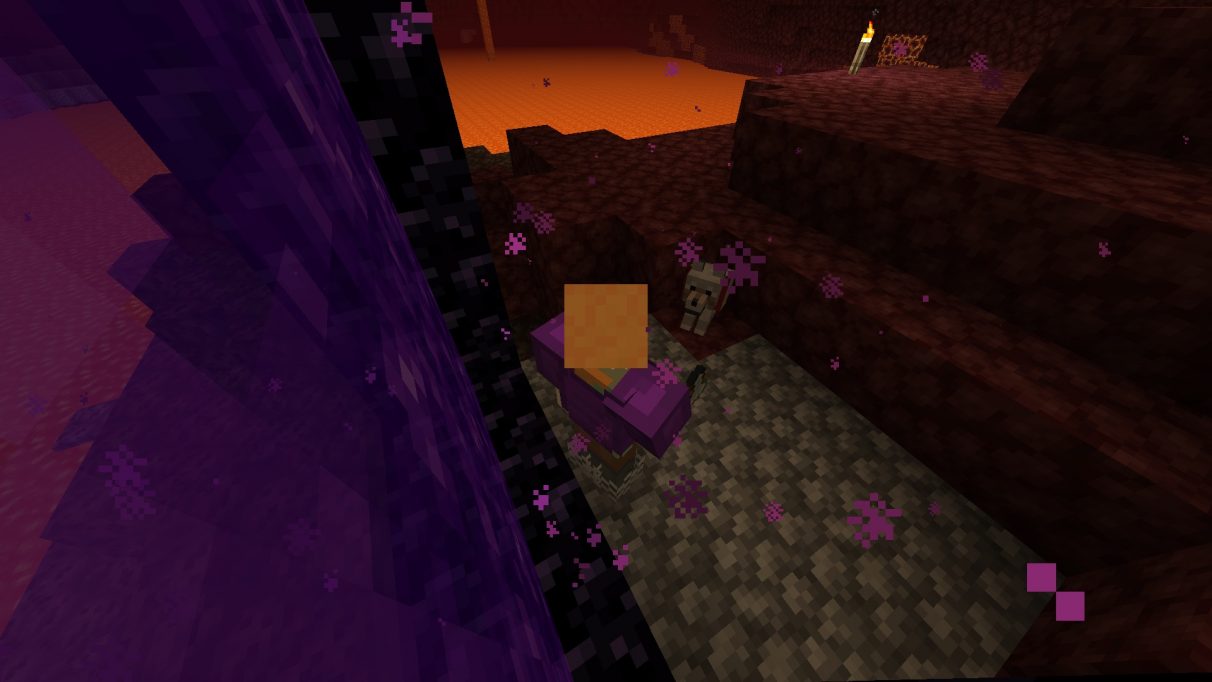 Well. We’re here now, and Hell is… oddly calm? It’s dark and it has an ocean of lava, but other than that I’m relieved. Naturally, the townies have had a hand here; torches have been placed, warding the immediate area. Rock stretches out to the right, with a few tunnels and pathways. I pet Goat and we look around.

“There are some lads here with swords”, I said aloud. One was watching from a floating island, and more appeared but made no approach. I dug experimentally at the ground. The stone was soft, and I pulled out a handful of crystals. Goat stuck close by, unconcerned. After walking around near the portal for a while it was clear the strange men with swords were entirely unbothered by my presence.

“Well, I guess… home then,” I said. “I just realised it would be pretty perfect if I got stranded here.”

We turned back to the portal to go home, just in time to see a tall, familiar green creature. It hissed. 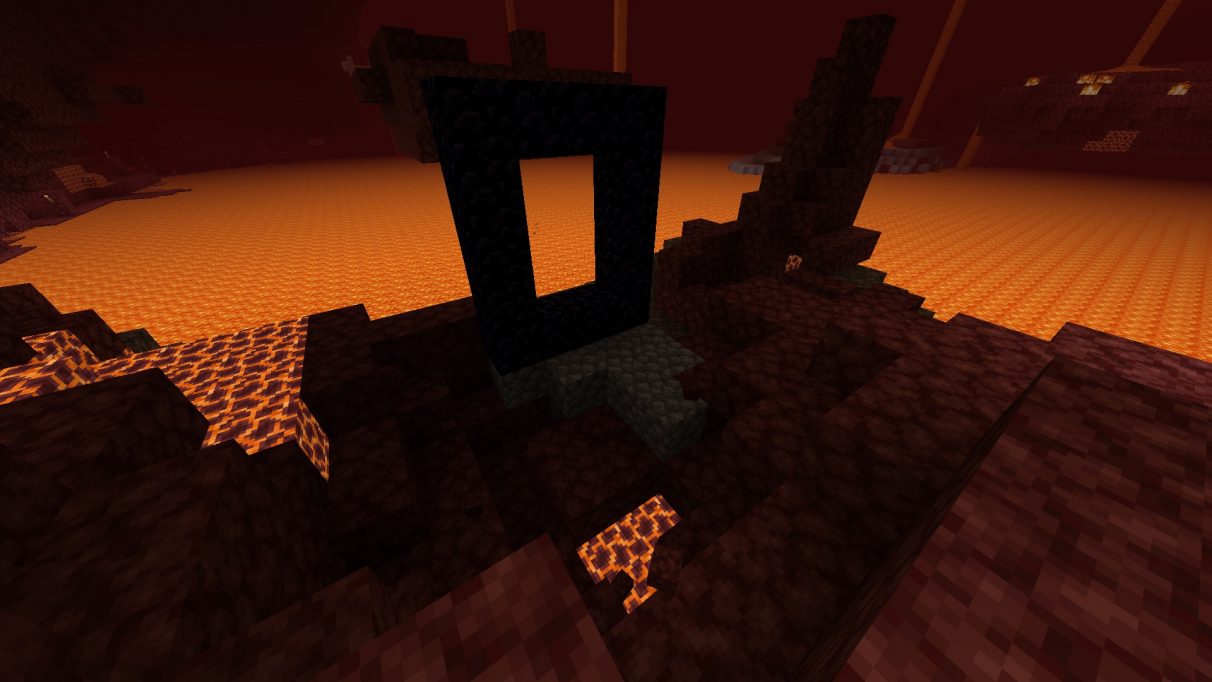 Okay then, I thought, post-explosion. This is fine. This is the definition of “this is fine”. I am able to process the recent series of events satisfactorily. I will not go insane with impotent fury and plunge my head into the haunted soil until I cease.

There’s a moment when you choose to leave hell (seconds before losing the option to leave hell) that might be a distillation of human existence. I was oddly grateful that this idiot Cerberus wannabe had led me here. Let’s face it, I had reconciled with the townies and needed a bigger, even more inescapable nemesis. As much as I have enjoyed having never going to hell, and so far relying almost exclusively on stone and not so much as touching a diamond, a hermit needs an adversary. Even if it is a landscape.

So. I made for a nearby torch, and followed the narrow pathway cut into the rock face. There would be something at the end of it, possibly another portal. Frankly, Hell was much less threatening than some of what I’d seen back on Earth. I was even charmed by the calm indifference of the sword-wielding pig-like demons. Perhaps they’re even blind, I speculated. Then one of them turned on me. I knocked him back in surprise. Another two joined him and in the tight confines they took only seconds to cut me down. An ambush! A bloody hellman amb– god DAMN it, Goat is still in there. 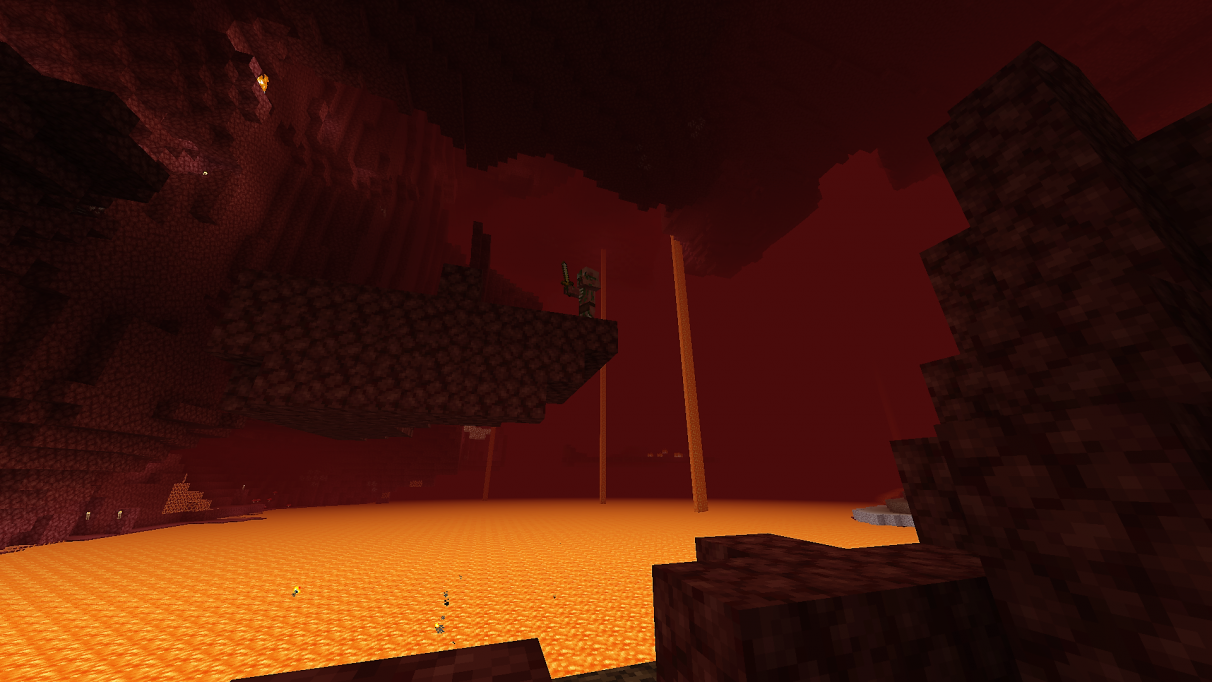 I went back, naturally. Surprised, I woke up in the undertown, not at camp. Not sure where the supplies were, I fast forwarded through the Minecraft first night experience until I had a stone axe, and ran back to the portal. It still worked, and even re-opened the other side. So once more I entered Hell, this time with nothing but a flint axe. All in or fold, Sin. We save him or we’re done with this whole thing. Most of the pigmen had disappeared, but Goat was gone. Quickly grabbing my old crossbow and food, I began to wander the shores of Hell, calling out for my dog, swearing at more of the treacherous pigmen.

Everyone else on the server was sure that Goat was dead.

I didn’t get a lot of images. Hell is not picturesque, and it was not long before the pigmen began to converge. The further I went, the more relentless they became. A rolling fight started as they chased me down tunnels and along alien sands, and I mercilessly shot them down. There is no daylight in Hell. Clocks spin wildly, no plants or animals grow, monsters appear and roam at will. I do not know how long I was there, only that I needed arrows and earthly stone and food to fight and heal. I ran low on both.

“Abandon hope” is not a threat or boast. It is sincere advice. A kindness. It was hope that drove me here, hope that kept me there. Hope that would surely drive me to madness, wandering those endless tunnels, those smouldering stones, howling my desperate cries, devouring the vile flesh of these other, fellow beasts that I may live another day, another hour, another chance to find my canine friend, who was surely long dead. Perhaps this is where they came from. Perhaps they were driven mad by their torment and their hunger, and became what they consumed. I will make a fine demon, I thought, counting nine more bolts as another hostile trio piled into the passage ahead and two more behind. My ghost will ruin you all. 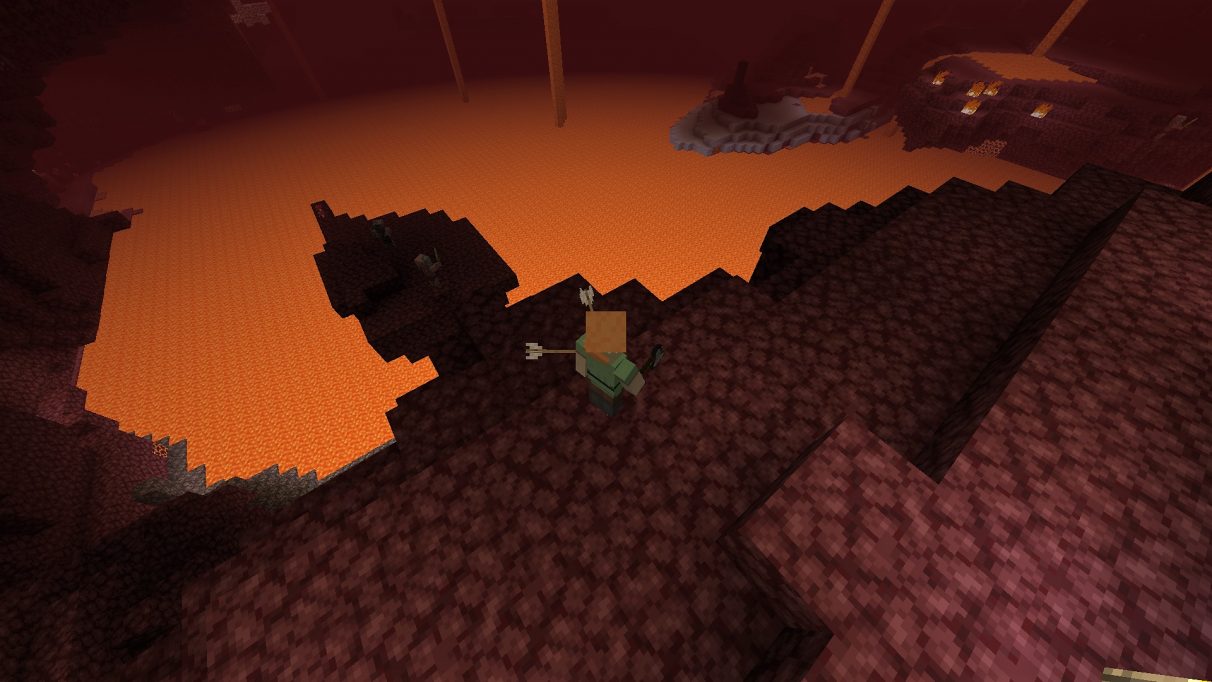 Oddly, I don’t remember them having bows.

Reader, I found him.

It’s all a blur now. I shot something, I reloaded, I fled, I swung my worn axe. With a scrap of food and handful of bolts left, I found Goat calmly sitting on the corner of some godforsaken ledge. More monsters appeared but I paused only to make sure he was still with me. Some of them stared comically as we ran past, fighting as little as possible. The portal – holy lord, the portal was still open. I scanned for more Creepers (I saw not a single one other than that first one who stranded us, surely feasting even now from a throne in Creephalla), and stepped through the portal home. Come on, Goat. Let’s get the fuck out of here. 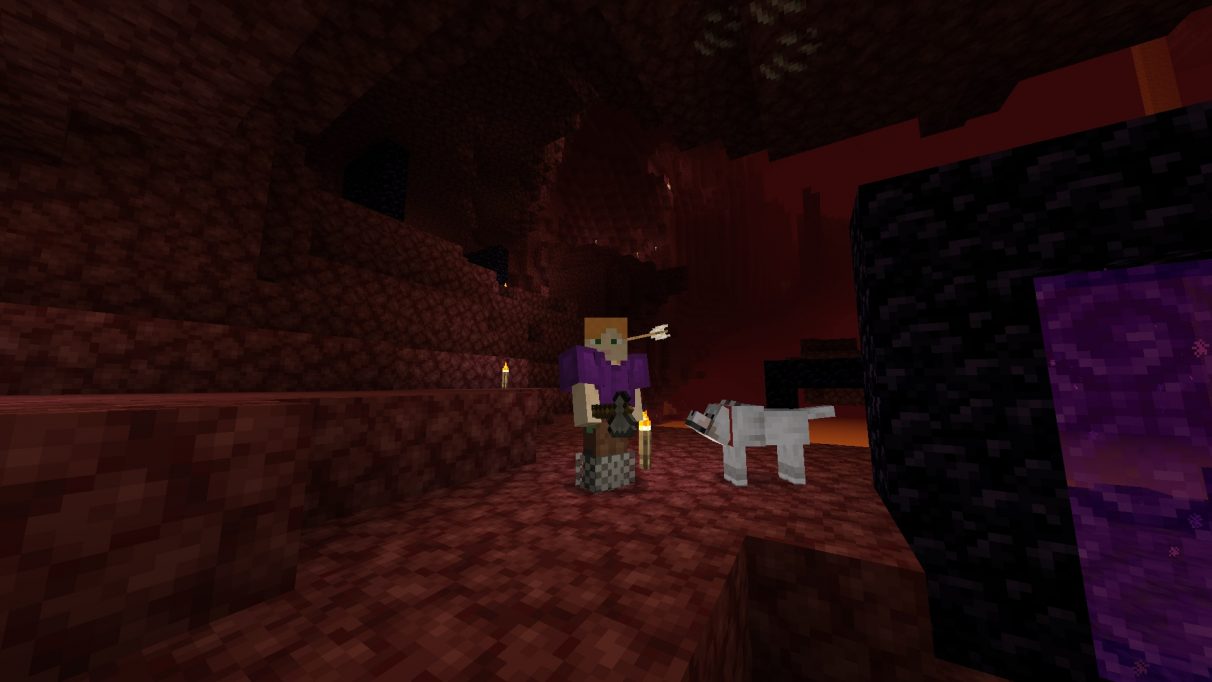 Goat did not come back with me. I do not know why, and yet somehow, I understood. Cobweb, sweet young Cobweb was waiting for us on the other side, in an undertown that suddenly seemed achingly sad. Oh Cobweb. Goat isn’t coming home with us. He’s a helldog now. One day when you’re older, or perhaps not a dog, you’ll understand.

On the way out, Astrid showed me around the incredible underground railway network she was building out as far as the zeppelin from earlier. The townies are… they’re doing alright, you know? I don’t even think I can hold this whole mess against them. 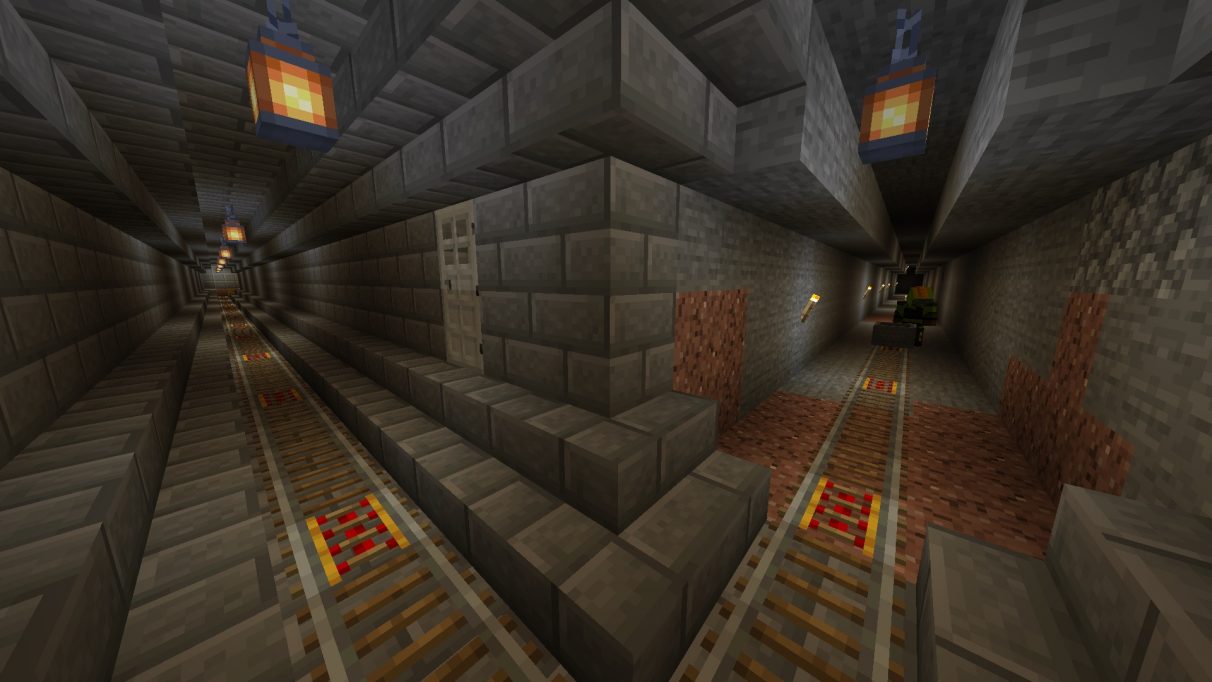 I never joined them, though. The food would last them a long while. Somehow I felt at peace with it all, even as I felt more keenly than ever that this was not the right place for us. We wouldn’t be affected by their projects anymore. We were going home, and from there, somewhere new. Probably North again. That’s the great thing about Minecraft. There’s always more North. 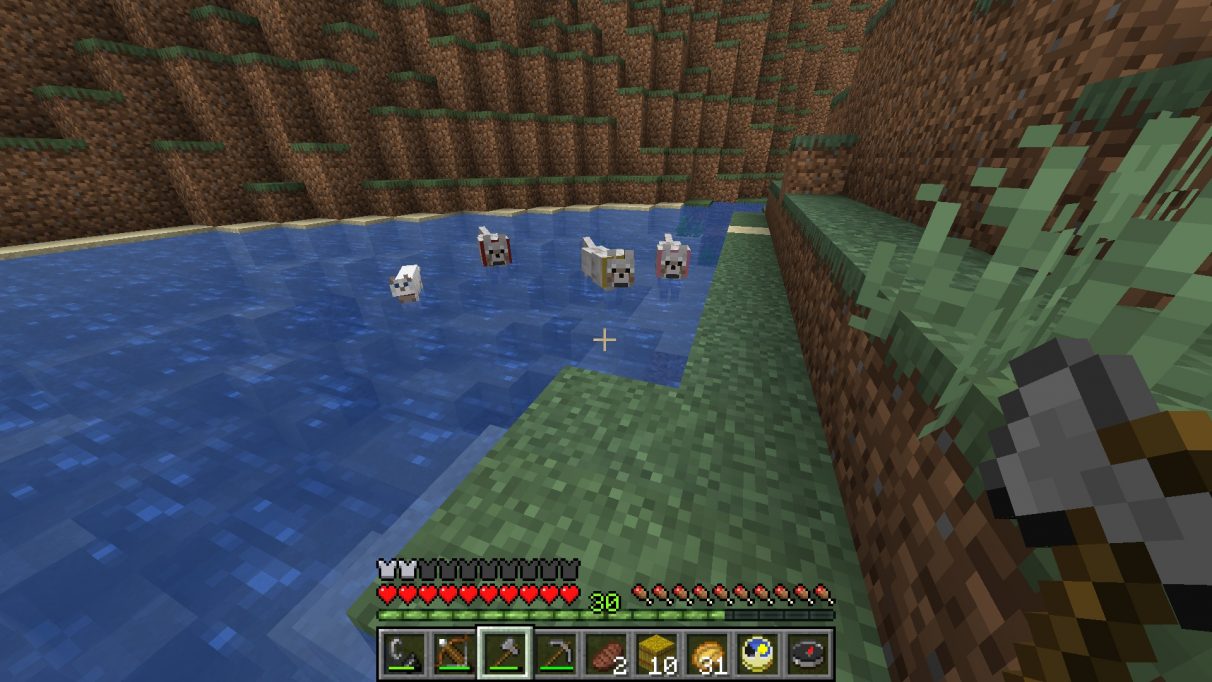 After some recuperation, I reunited Cobweb with her parents (and Arsehole) a few weeks later. Heinrich, the wandering trader version of Inspector Clouseau, was still there, stuck without his llamas. He hadn’t accidentally burned the place down or tried to eat an ingot. When he left I started packing Birchbark up to move on. Lying (“Clod” – Ed) Village was massacred by marauders, leaving no reason to stay. A few weeks later I went back to town for a night to drop off more supplies and build a small kitchen next to the larder. Then the townies reported that the Fourth Dog still watches to this day over the gateway from our world to Hell, as he once watched over the gulch where I found him. Then also, poor Cobweb became trapped in their water feature and drowned.

I left everything behind that night, and took us all away, past the gulch, the farms, the desolate village, and into the unknown. I have not been back since. 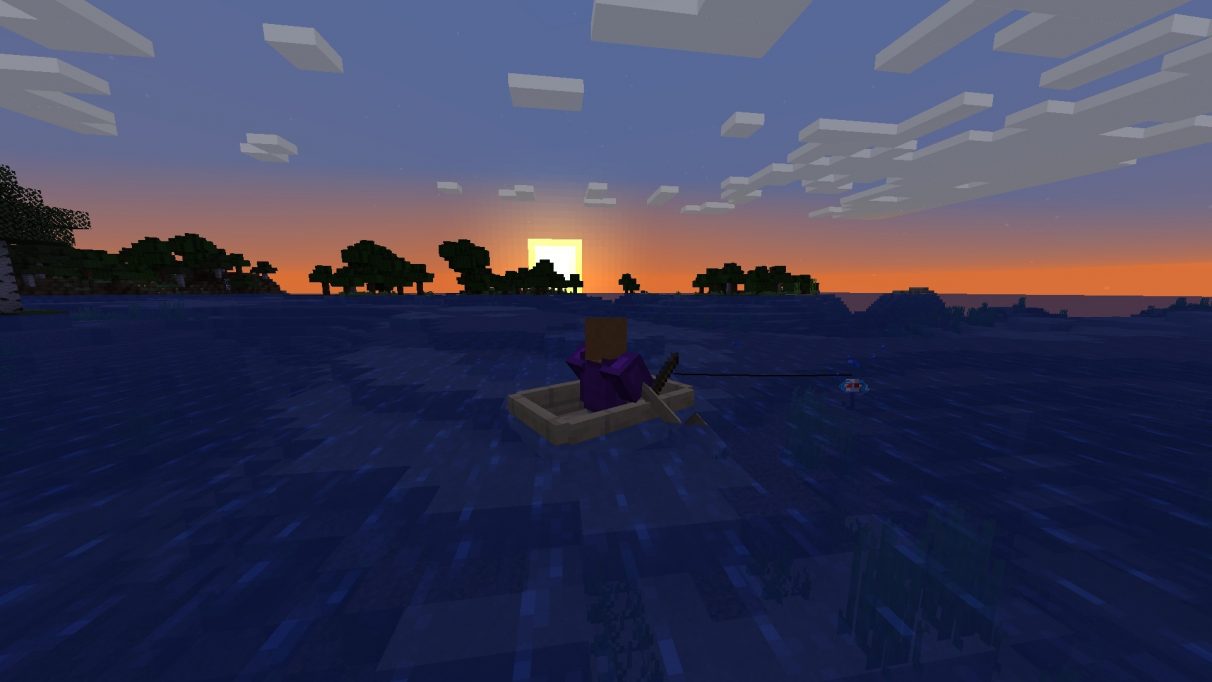 The further adventures of Birchbark

Thanks to everyone on this RPS Minecraft realm, especially Nate and Natalie Clayton (and only partly because I can’t remember which of the others’ real names matches up with which username). I’m not thanking Mojang until you can pet the dogs.