Whenever someone asks me what my favourite Final Fantasy game is, the answer is always Final Fantasy VIII. It’s getting on a bit (20 years, in fact) but its tale of time-travelling witches, lovestruck teens, cannonball dogs and bonkers floating military schools is still, for me, one of the best things to come out of this never-ending series.

It is, however, one of the more trying Final Fantasy games to get running properly on PC. The 2013 PC release is, let’s face it, a bit of a fudge. The music isn’t right, the controls are fiddly; it’s aged horribly. Good thing, then, that today marks the release of Final Fantasy VIII Remastered, a spruced-up, PC-friendly version that finally does it justi– wait… What’s wrong with those SeeD students? And those backgrounds? And oh sweet Guardian Forces WHAT HAVE THEY DONE TO SQUALL’S FACE?

I understand now why Square Enix largely focused on the game’s battle scenes and FMV sequences in that initial Remastered trailer, because holy moly it’s a bit of a shock when you actually clap eyes on the rest of it. Don’t get me wrong. The character models are gorgeous. You only need to look at the transformation between Squall’s original, puffy-cheeked appearance and his new, pretty anime body above to see how much they’ve improved. Those pre-rendered backgrounds behind him, though? Those are a different story.

In a nutshell, it seems like the developers have taken a giant vat of Vaseline to Final Fantasy VIII and given it a good old smear. Edges have been softened, colour gradients blended, and some chunky, jagged background textures brought into sharp, unforgiving focus. Just look at these two battle scenes to see what I mean. 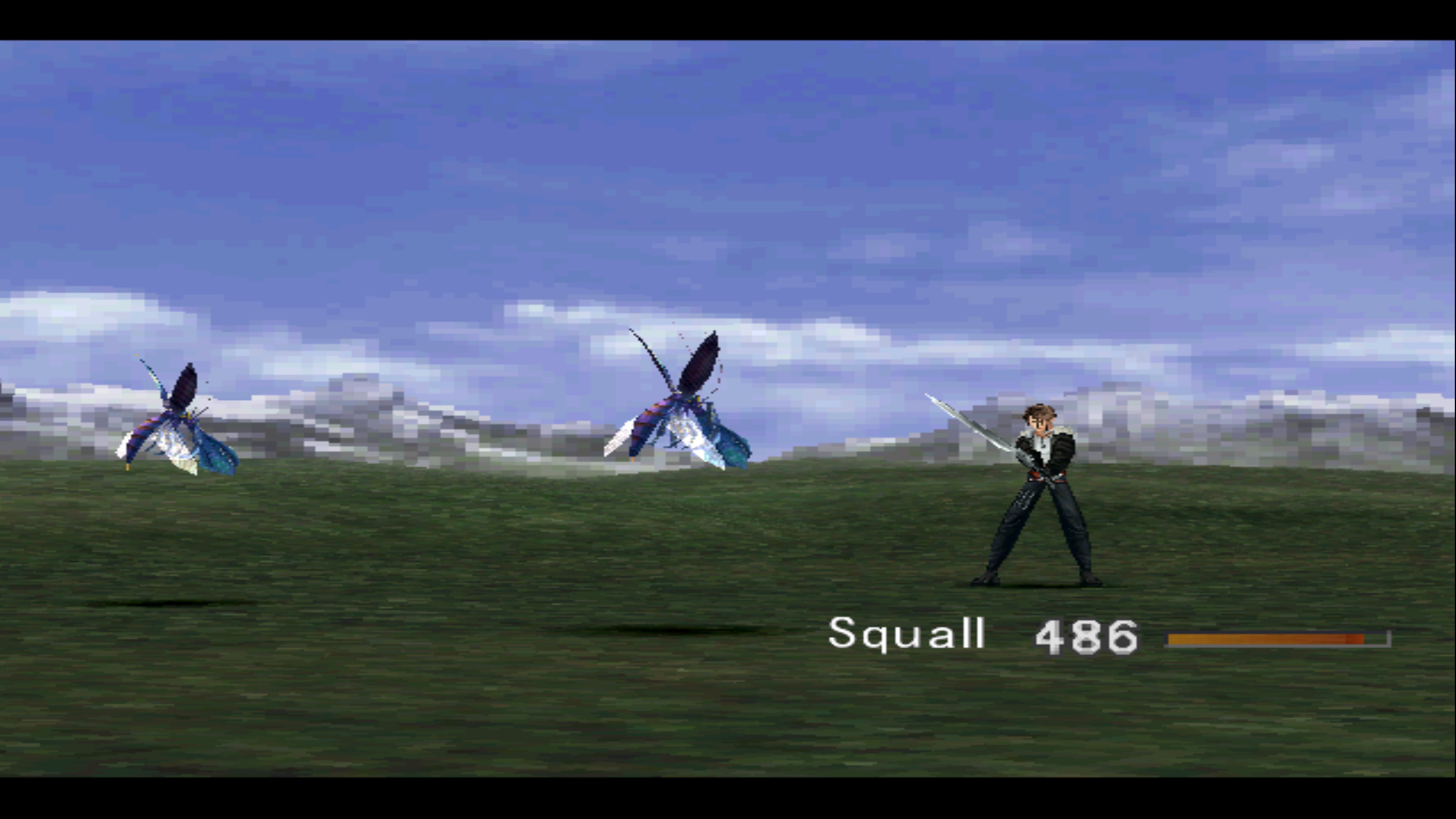 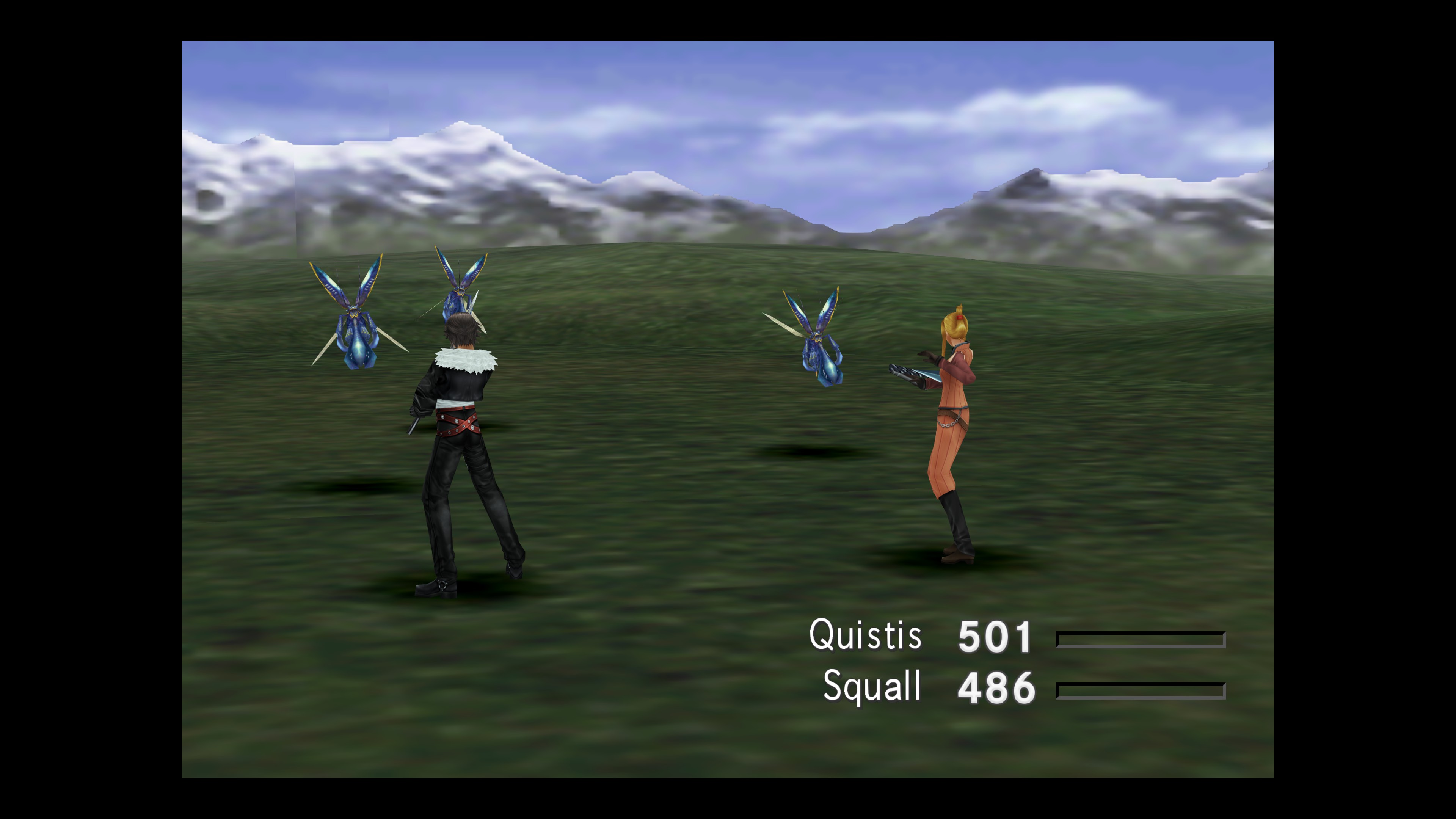 The 2013 PC version is by no means any great masterpiece, but I don’t know. As much as I love the clean, detailed lines of both Squall and his insectoid foes in the Remastered version here, I’m less enamoured with whatever the hell’s going on with those weirdly sliced mountains in the background. The original mountains may have pixels the size of doorstops, but I’ll be damned if they’re considered ‘worse’ than the rough, almost unfinished-looking outlines they’ve been given in the remaster.

If you think that’s bad, spare a thought for the poor SeeD students trapped forever in their original mutated pixel form over in the foreground of this pre-rendered background. 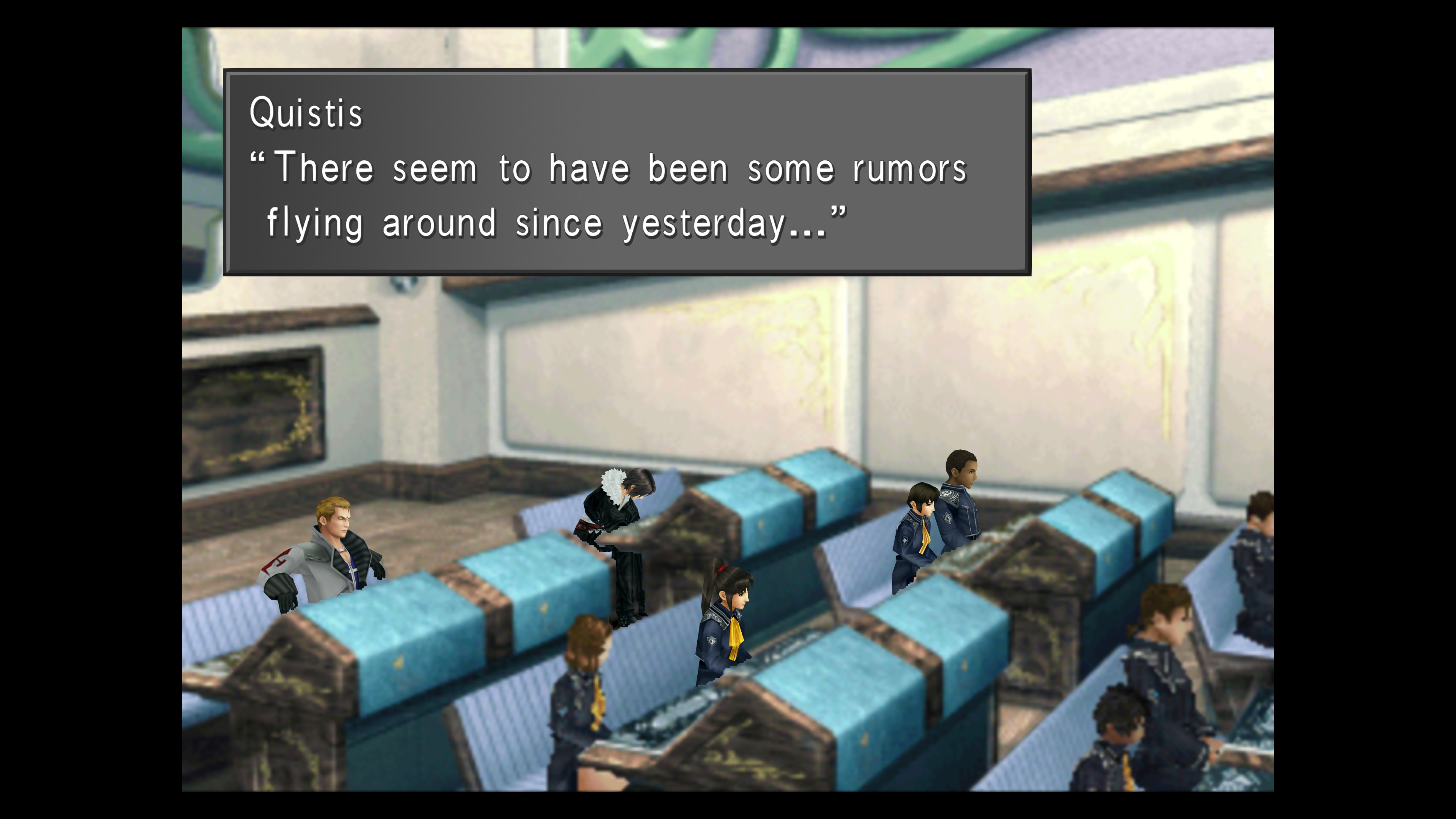 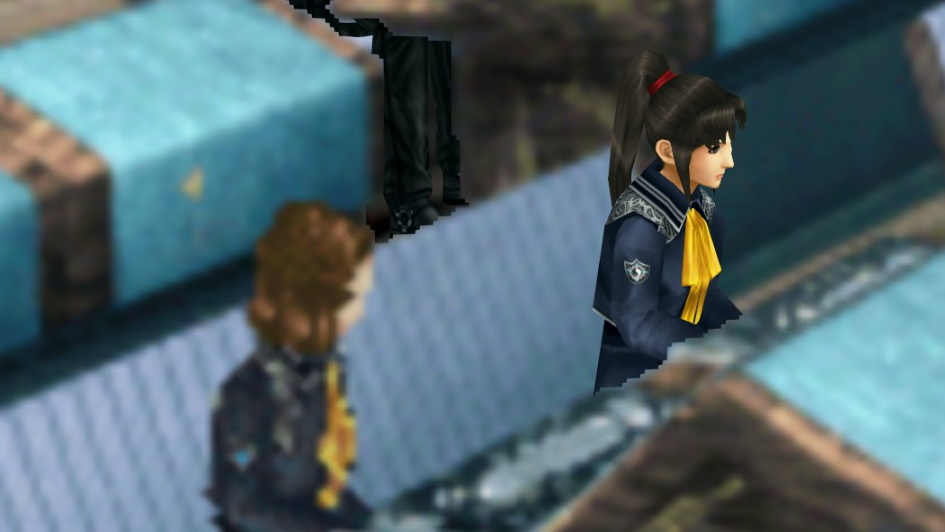 Unlike class beauty Sheila on the right, poor Judith had her faced completely erased when she failed the last field exam.

This is sort of my biggest complaint about the remaster. While each character is certainly a lot easier on the eyes than the 2013 release, they just don’t feel as grounded in their individual environments any more compared to their blurry, misshapen classmates. Instead, they feel like they’ve been air-lifted in from a completely different game, robbing me from taking any satisfaction in their glorious new ‘I can actually see your individual expressions now’ look whatsoever. 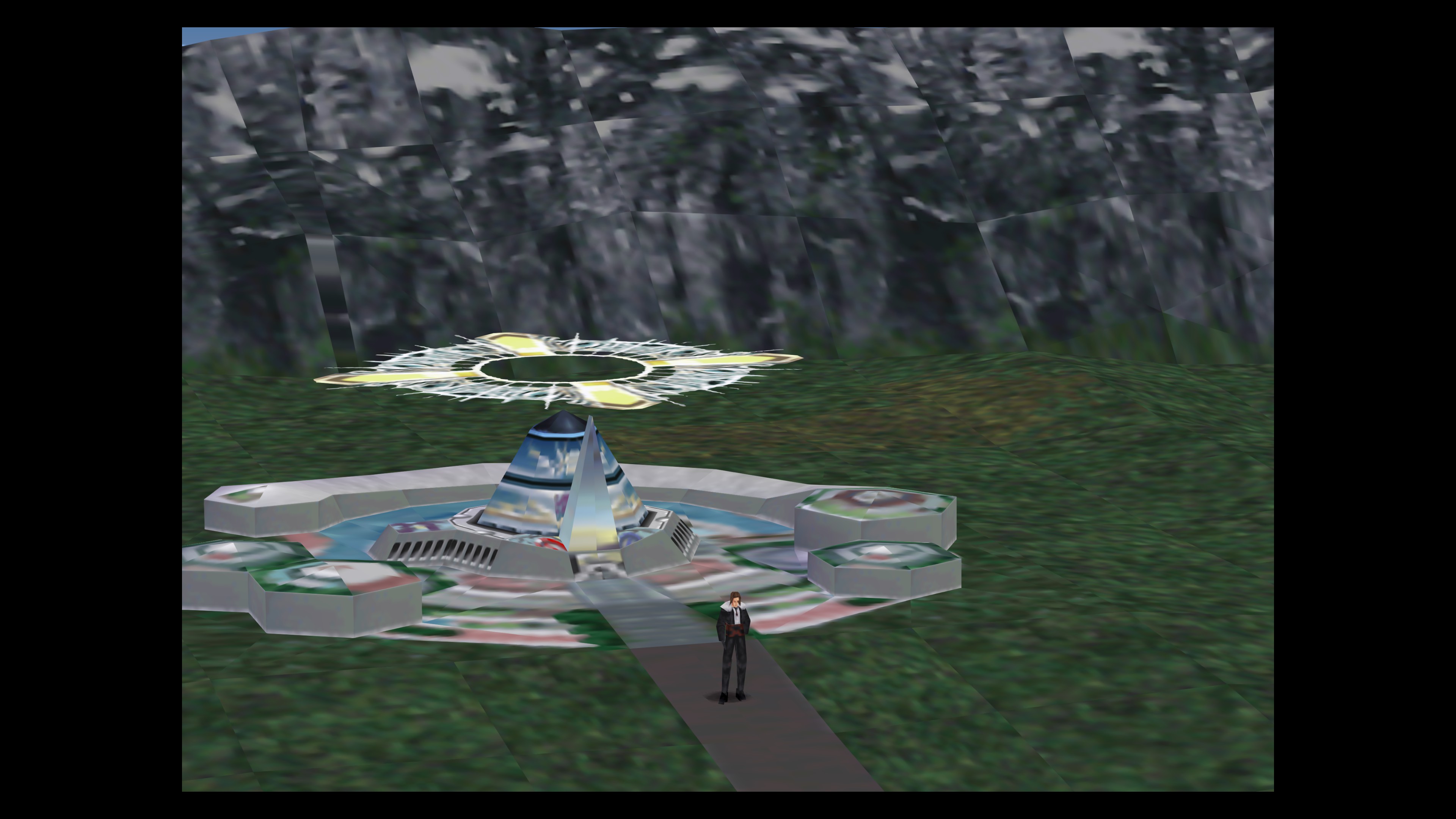 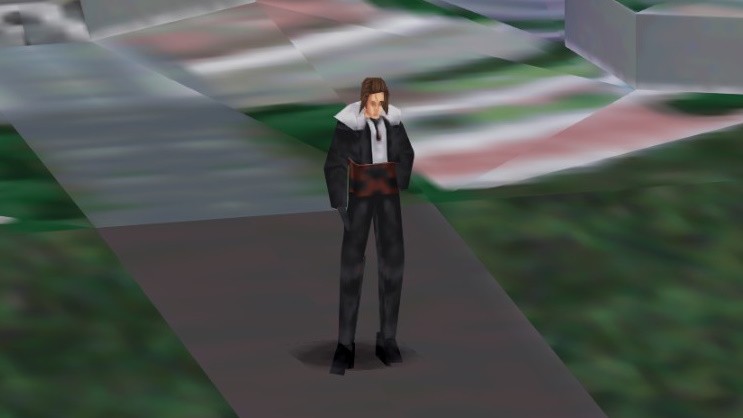 My eyes! They burn!

It’s times like this when I wish the Remastered version had the 2013’s ‘Original Graphic Mode’ option, because that’s able to turn this monstrosity above into this mildly better monstrosity below. 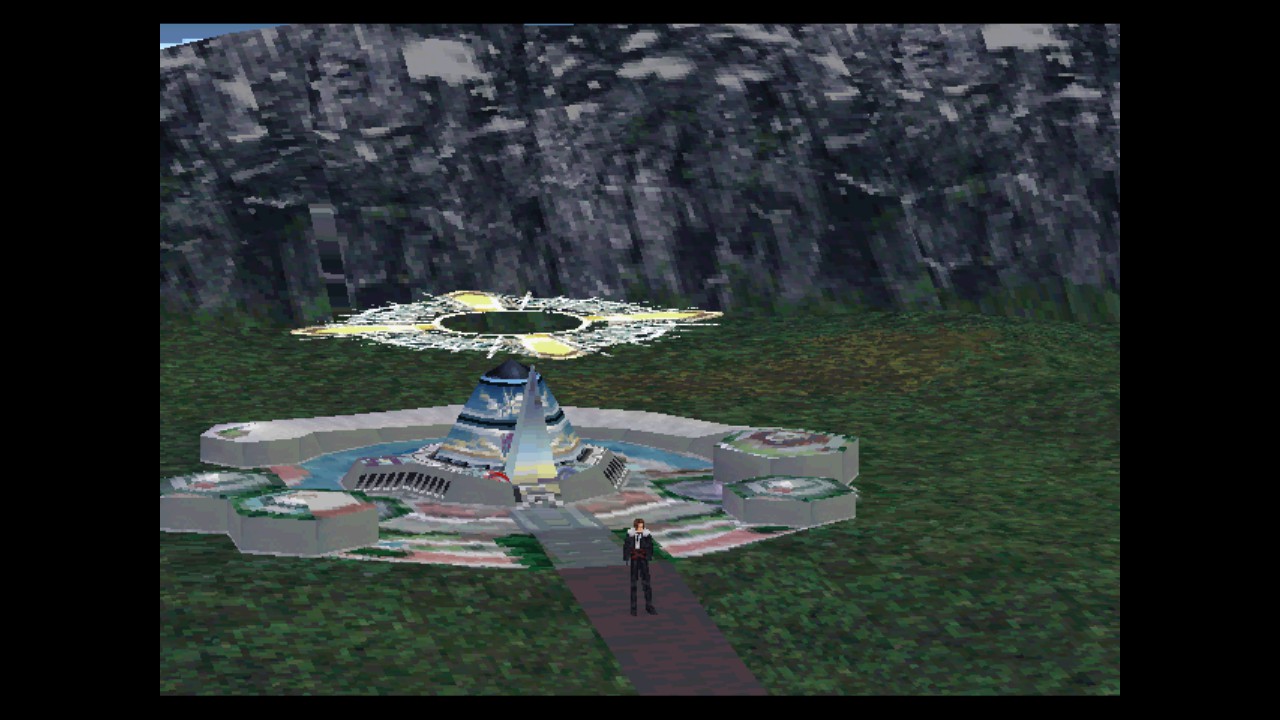 This is the 2013 version in Original Graphic Mode.

Those smeary textures are replaced by chunky jaggies again, and in my eyes this gives it a lot more character, texture and personality. This is how I remember the game looking, not buffed and blended to within an inch of its life so it doesn’t even look real any more.

Having said that, trying to play said 2013 version again in 2019 is just… well, awful. There are no menu settings outside those you can select in the initial launcher, so if you want to change anything or remap any of its obscure keyboard controls you have to quit out and start it up again. The soundtrack is a synthesised abomination compared to the original, and everything, from the character models to the pre-rendered backgrounds, to the horribly blown-up menu text, just doesn’t look like it’s been made for modern gaming monitor.

The Remastered version, on the other hand, has better default controls you can remap on the fly, the music is the exquisite gosh-darned original, and it has the blessed ability to speed everything up by three times the game’s normal speed a la Final Fantasy XII: The Zodiac Age‘s fast forward button (not to mention the option to turn off random encounters) to help get rid of the grind.

There are certain tricks you can pull to make it less smeary and get it back to the version of the game you’ve probably been carrying around in your head all these years like I have. Indeed, I’ve actually enjoyed the game a lot more by playing on a lower resolution than either 1080p or 4K. For example, playing on 1280×720 (or, whisper it, 720×400). That might sound sacrilegious to some PC folks, but for me it really makes them feel like they’re actually part of the environment again instead of floating weirdly in front of it. 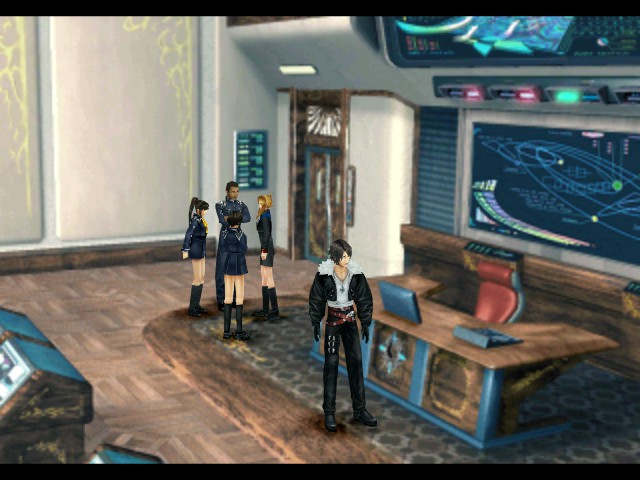 Now THAT’s more like the Final Fantasy VIII that I remember….

I’d also recommend turning the anti-aliasing off to help get back to the original’s slightly rougher, grittier look. Although I should note that even this remedy is no match for that cursed overworld map. Unfortunately, that’s pretty much it as far as graphics options go in Final Fantasy VIII Remastered, but at least it’s better than the 2013 version.

Despite being able to dial back the graphics to try to scrub it clean of all its new, clear-cut lines, I can’t help but be a mite disappointed. Perhaps it’s logistically and financially impossible to redo the entire game with a prettier set of textures (it’s possible the Final Fantasy VII Remake is eating up everyone’s time and resources at the moment), but it sure would have been nice, right? That’s the remaster I was hoping for here, not some wrinkled, stretched-out version of what it looked like 20 years ago.

Then again, perhaps it’s an apt look for a game whose main villain ultimately wants to destroy the world by compressing time so she can become one with the universe and start afresh. Here, we see that in action, the past crashing headlong into the future in order to recreate what is, after all, the best Final Fantasy game ever made. I just wish they’d hurry it up a bit and finish said compression so we got a completely brand-spanking new version instead. 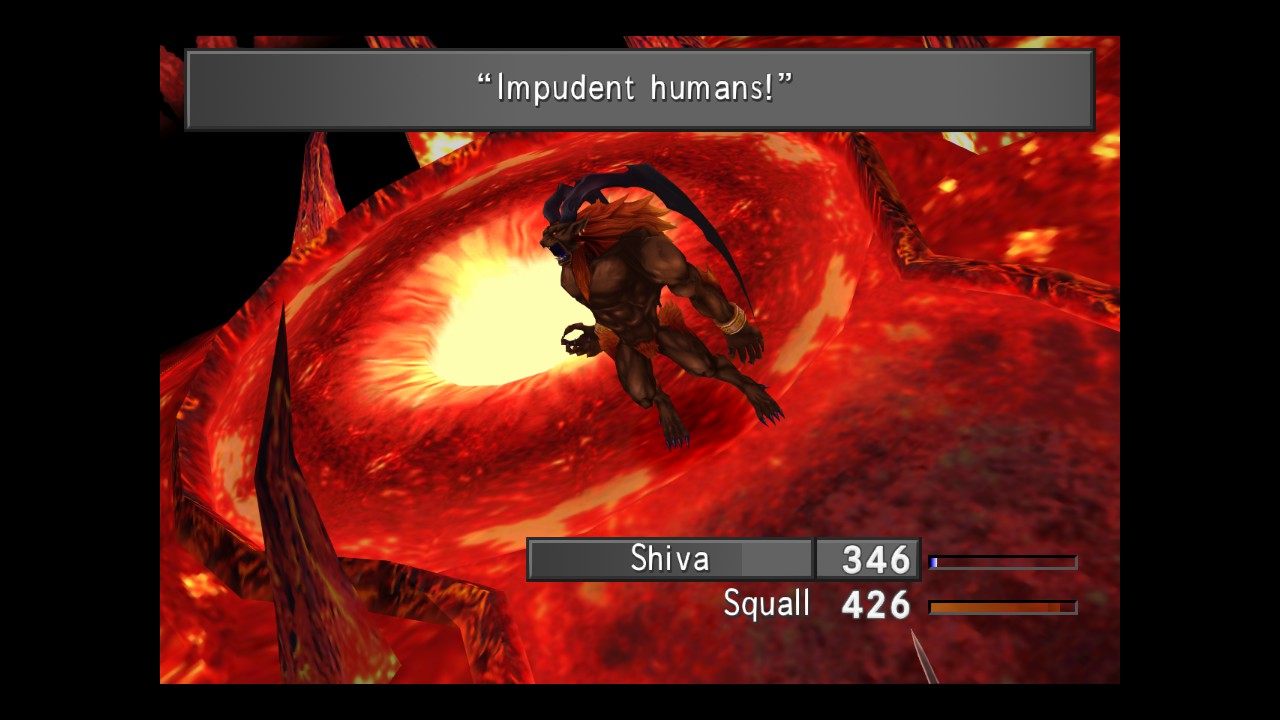 Even after all this, if you’re going to play Final Fantasy VIII today on PC, the Remastered version is the way to do it. It might not look like the game you’ve held in your head all these years (or indeed how you’d hope a remaster might look if you’re coming into it fresh), but it’s so much easier to play than the 2013 release, and not even Squall’s squished fringe-less overworld face can detract from the joy of hitting that fast forward button and zooming round the map like a hyperactive cactuar.